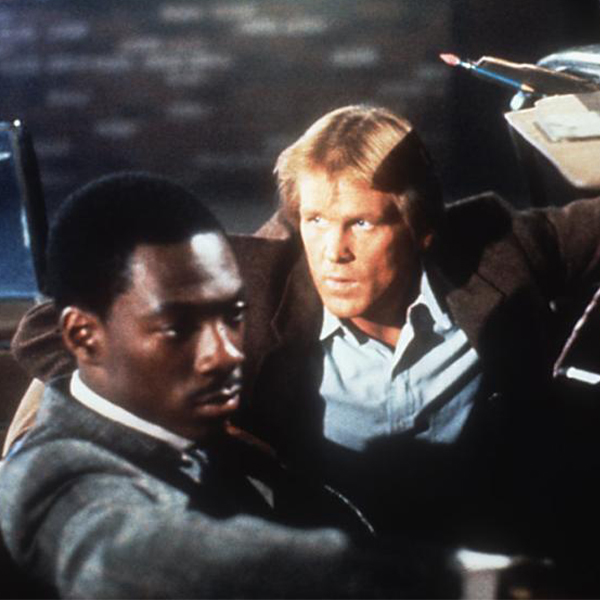 One of the most popular action movie formats of the 80s was the buddy cop movie, in which circumstances place two mismatched individuals together (at least one of whom is a cop) in a race against time. This concept was popularised, and in many respects perfected, by 1982's 48 Hrs.

Jack Cates (Nick Nolte) is San Francisco's toughest, grumpiest cop, on the tail of dangerous criminal Albert Ganz (James Remar). Cates' investigation leads him to Reggie Hammond (Eddie Murphy), a one-time partner of Ganz who's now behind bars. Reluctantly, Cates gets the trash-talking criminal a 48-hour leave from prison to help him track down and capture Ganz.

Initially developed with Clint Eastwood and Richard Pryor in mind for the lead roles, 48 Hrs. was directed by Walter Hill, and marked a couple of famous firsts. For one, it was the first producing credit of Joel Silver, who became the most successful action producer of the 80s with such hits Commando, Predator and Die Hard. Secondly, it was the debut film of Eddie Murphy, then a stand-up comedian aged just 21. Murphy would follow this film with Trading Places and Beverly Hills Cop, and was soon established as the biggest comedy star of the decade.

The hard-edged action and coarse humour of 48 Hrs. helped set the tone for action movies in the decade ahead, as well as inspiring many more buddy cop movies such as Joel Silver’s 1987 hit Lethal Weapon, and Walter Hill’s 1988 film Red Heat. A sequel followed in 1990’s Another 48 Hrs.