In the 1991 comedy What About Bob?, a rivalry between two men reaches epic proportions. For the film’s stars Bill Murray and Richard Dreyfuss, life imitated art.

Murray has said that he took pleasure in tormenting Dreyfuss onscreen, but maintains their feud never escalated backstage. Dreyfuss, however, has characterised the two actors’ fights as far more one-sided and abusive, including violent outbursts from Murray. Here are the two sides of the tale. 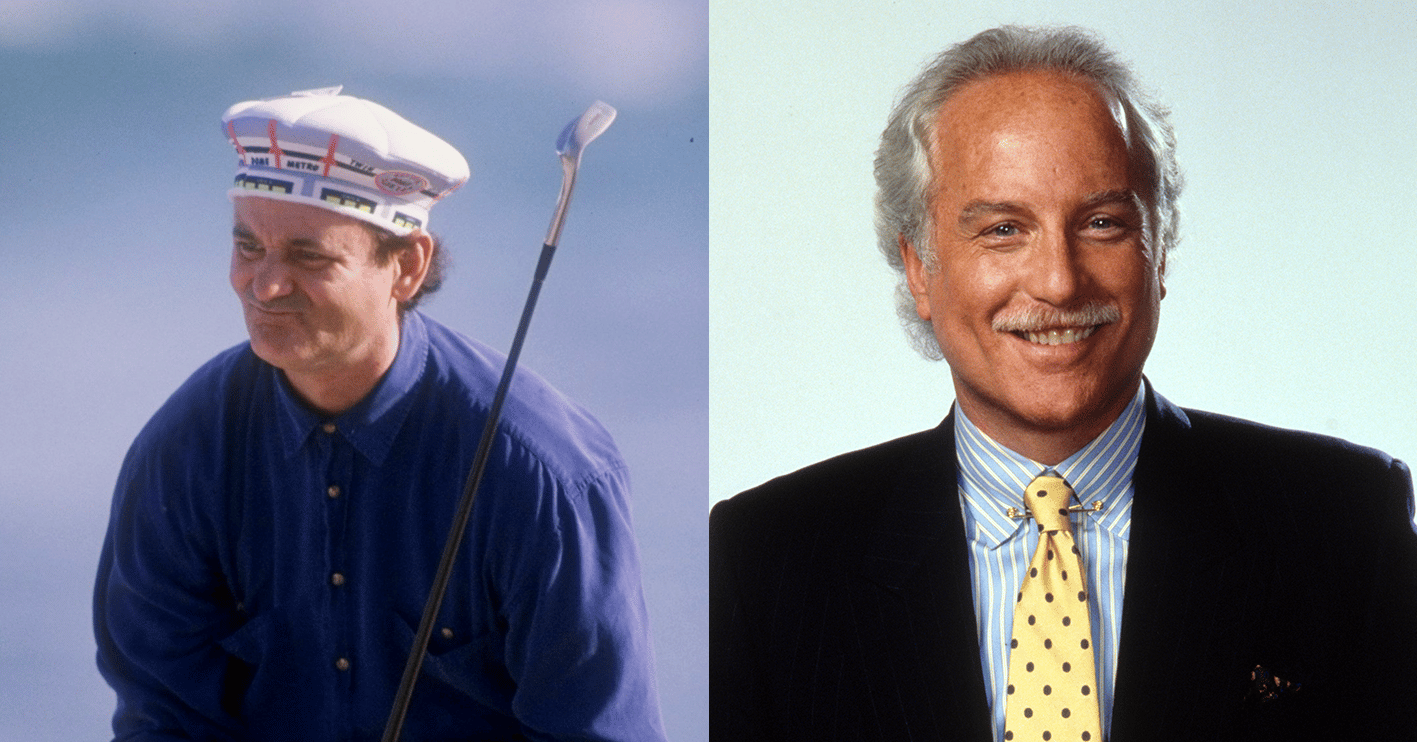 By the time he made What About Bob?, Bill Murray was one of the biggest stars in the world. Having risen to fame as a star of Saturday Night Live, roles in Caddyshack, Stripes and Ghostbusters sent Murray stratospheric. After a four-year break he took to study philosophy and history at Paris’ Sorbonne University, Murray returned to movies in the late 80s hungry for new roles.

Though adored by many colleagues in comedy, his brief time in Hollywood had already given Murray a reputation for unreasonable behaviour. Ghostbusters co-star Dan Ackroyd nicknamed him ‘The Murricane’ for his sudden mood swings on set.

Murray would later recall a conversation with a friend about his fiery temperament: “[My friend] said: ‘Yeah, you have a reputation of being difficult to work with.’ But I only got that reputation from people I didn’t like working with, or people who didn’t know how to work, or what work is.” 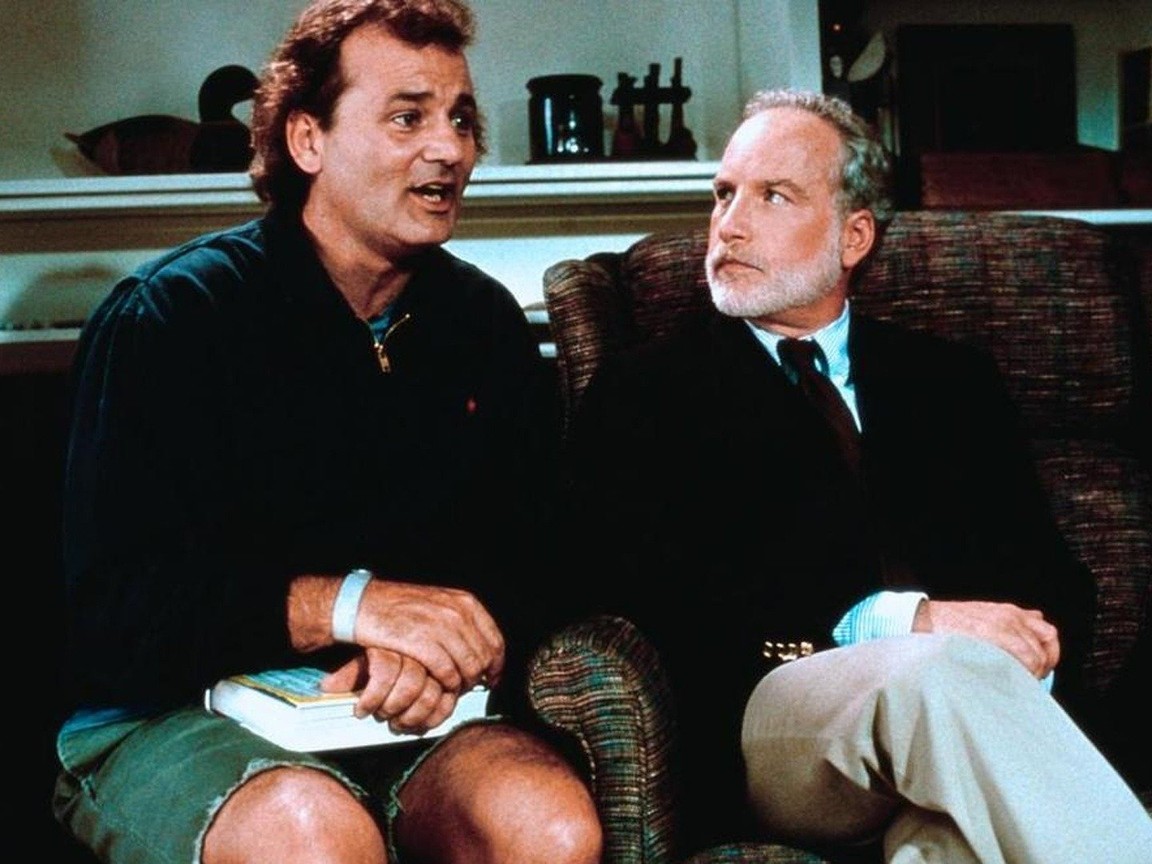 When Richard Dreyfuss was cast in What About Bob?, the Jaws and Close Encounters of the Third Kind star had like Murray recently returned from a mid-80s acting break. (For Dreyfuss, the break was to recover from drug addiction).

Also like Murray, rumours followed Dreyfuss about him having been a challenging co-star. On the set of Jaws, the famous rivalry between Dreyfuss and Robert Shaw once erupted into a fight over a hosepipe, where Dreyfuss self-admittedly “lost [his] sense of humour and that lasted about an hour.”

What About Bob? follows the misadventures of Bob Wiley (Bill Murray), a man who suffers from a wide range of phobias. He becomes obsessed with his psychotherapist, Dr. Leo Marvin, and follows him on holiday, befriending Marvin’s family and irritating him to extreme degrees. Headlined by two feisty personalities, the making of the film would create a perfect storm. 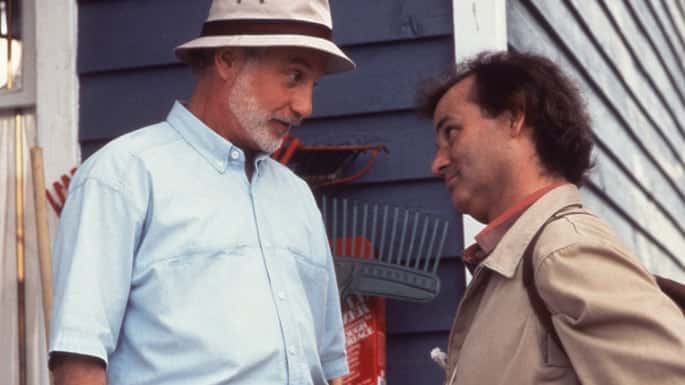 Speaking to the AV Club in 2009, Dreyfuss summarized his experience with What About Bob? in a few choice words: “Funny movie. Terribly unpleasant experience.” Dreyfuss has also described Murray as an “Irish drunken bully”, a “despicable pig” and a “schmuck”.

Once, Dreyfuss and Murray almost came to blows. Speaking on Role Recall in 2019, Dreyfuss remembered a particular incident of threatening behaviour from his co-star during production. “Bill just got drunk at dinner…He came back from dinner [one night] and I said, ‘Read this [script change], I think it’s really funny.’ And he put his face next to me, nose-to-nose. And he screamed at the top of his lungs, ‘Everyone hates you! You are tolerated!’

“There was no time to react, because he leaned back and he took a modern glass-blown ashtray. He threw it at my face from [only a couple feet away]. And it weighed about three quarters of a pound. And he missed me. He tried to hit me. I got up and left.” 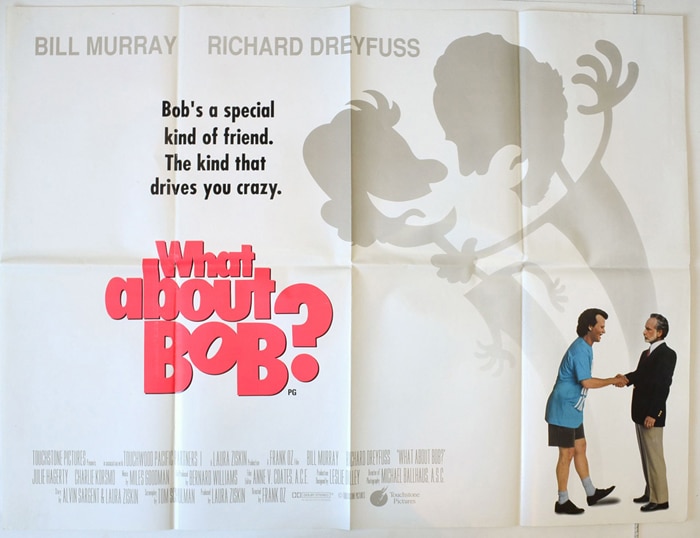 In a different incident, Murray got into a “spirited disagreement” with the producer Laura Ziskin, which ended with him tossing her into a lake. Years later, Dreyfuss’ son Ben took to social media and claimed that this fight escalated tensions between his father and Murray.

“Bill Murray had a meltdown during What About Bob? because he wanted an extra day off and Laura said no and [he] ripped off her glasses off her face and my dad complained about his behavior and Bill Murray threw an ashtray at him,” Ben Dreyfuss wrote on Twitter.

“Everyone walked off the production and flew back to LA and it only resumed after Disney hired some bodyguards to physically separate my dad and Bill Murray in between takes,” he added.

“I drove him nuts” 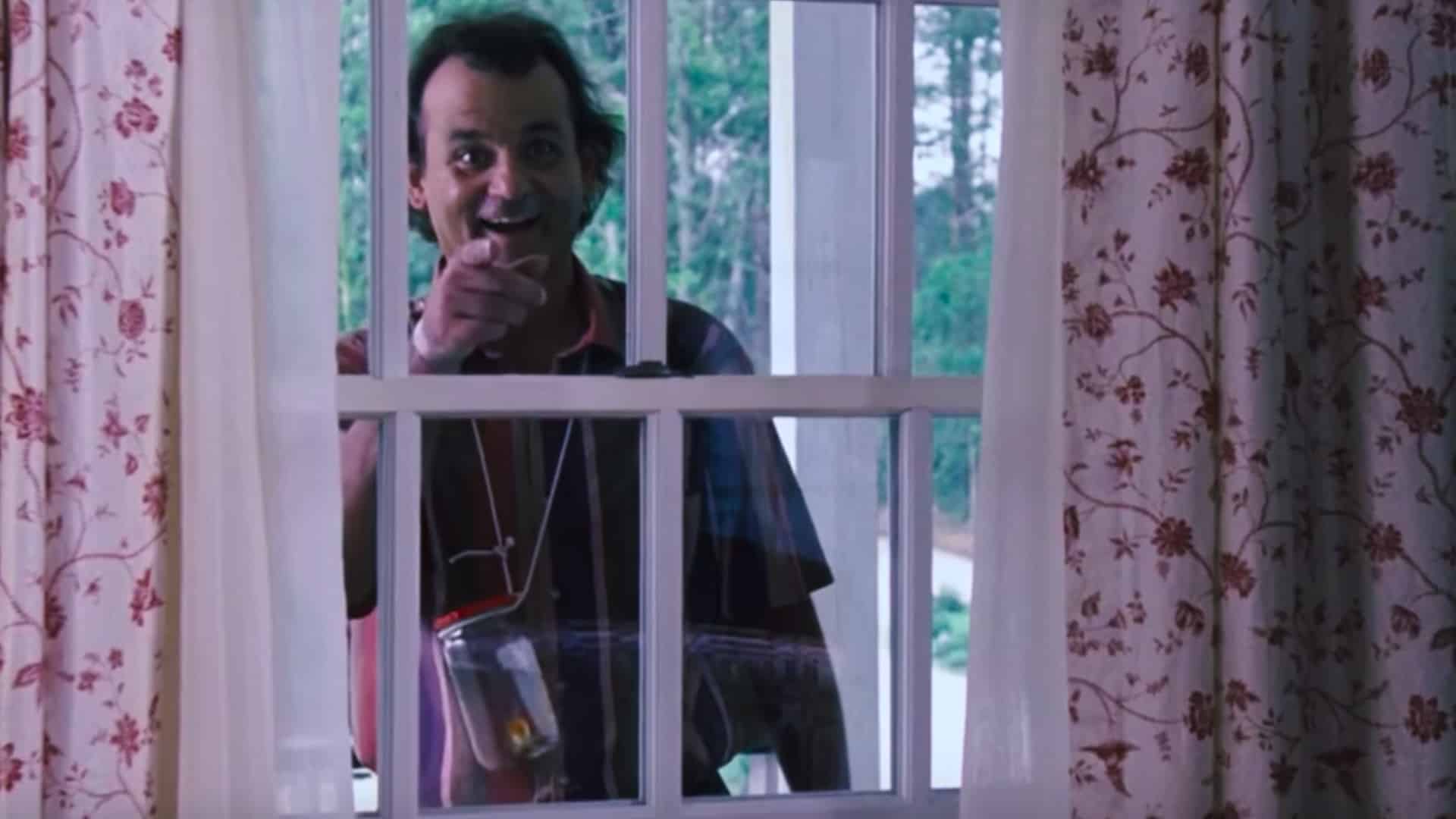 Murray has brushed off accusations of abusive behaviour, saying that his rivalry with Dreyfuss fuelled their performances for the film but never escalated backstage.

“I really try to make the other actor look good whenever I can,” Murray said in a 2014 interview with Howard Stern. “In this particular film, [I was] annoying Dreyfuss, which I kind of got to enjoy I’ve got to confess – but I didn’t try to annoy him off the screen.”

Murray claims there was give-and-take in their feud. “We didn’t get along on the movie particularly, but it worked for the movie,” he has said. “I mean, I drove him nuts, and he encouraged me to drive him nuts.” 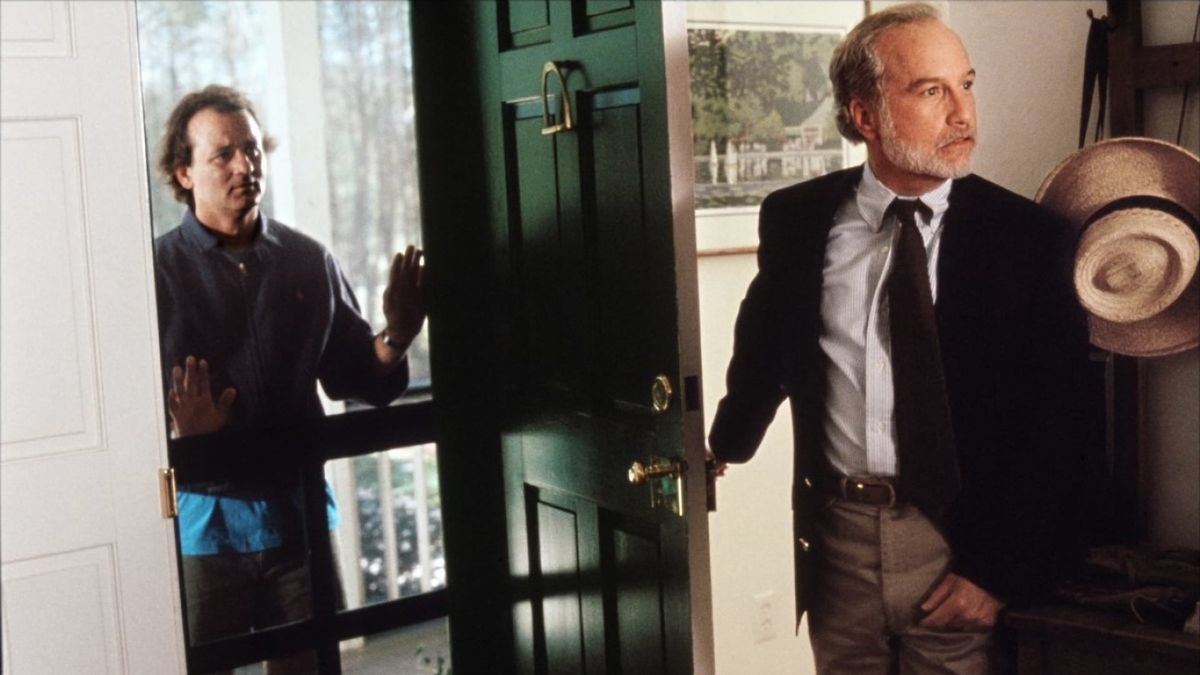 Given free rein to improvise, Murray has described how he yelled in Dreyfuss’ ear for one shot. “While he was talking, I got in real close to crowd him, I put my head on his shoulder, screamed into his ear and did all sorts of annoying things,” Murray told Deseret News in 1991. “Some of that was even in the script…no wait, none of that was in script. I made it all up.”

“The script wasn’t nearly as annoying as I could be, so I had to improvise a lot in the movie,” he added. “And even what you eventually see in the movie isn’t close to how really annoying I can be when I put my mind to it.”

What About Bob? was directed by Frank Oz, who has verified that his leading men engaged in a feud – but like Murray, he felt that this enhanced their performances as each other’s on-screen enemies. 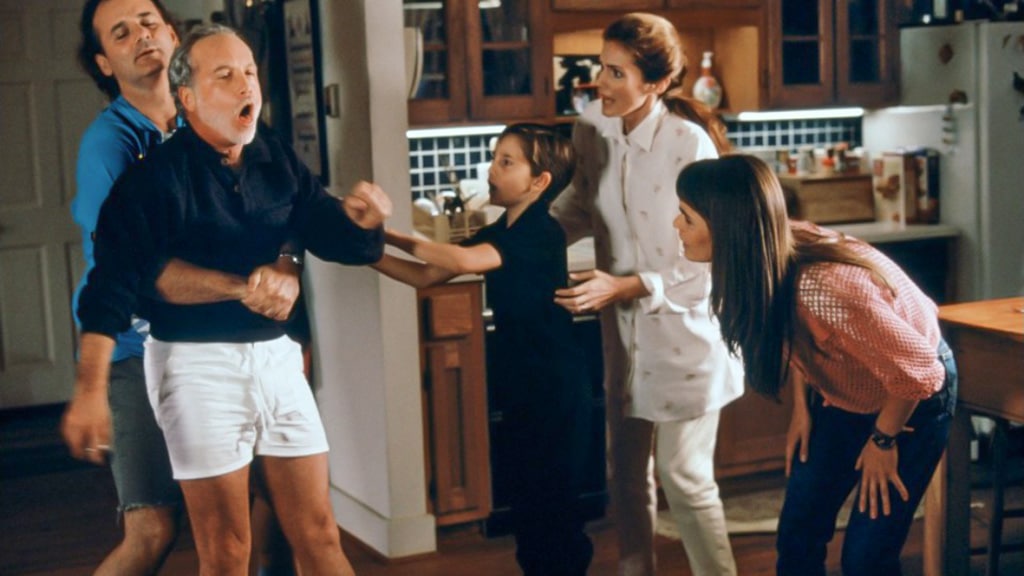 “I was just trying to get the best out of both of them,” Oz told Rolling Stone in 2021. “And as a matter of fact, I just wrote Richard a letter, after all these years, because I was looking at that movie, and I realized how brilliant Richard’s work was. But yes, they didn’t get along. And in my perverse directorial intent, I was very pleased. They’re not supposed to get along.”

Oz has admitted that filming, which took place in New York City and Moneta, Virginia, was “incredibly difficult, incredibly full of tension,” as he was wrapped in doubt about whether the comedy was any good. This feeling may have leaked into the tensions between Murray and Dreyfuss.

“It was a tense and tough shoot for a million reasons,” Oz noted. “I was really scared to death that we had a piece of s***, because it was so impossible to judge it. I felt I knew what I was doing, but there was this huge sigh of relief when the movie worked.”

“Although I loathe him, he makes me laugh” 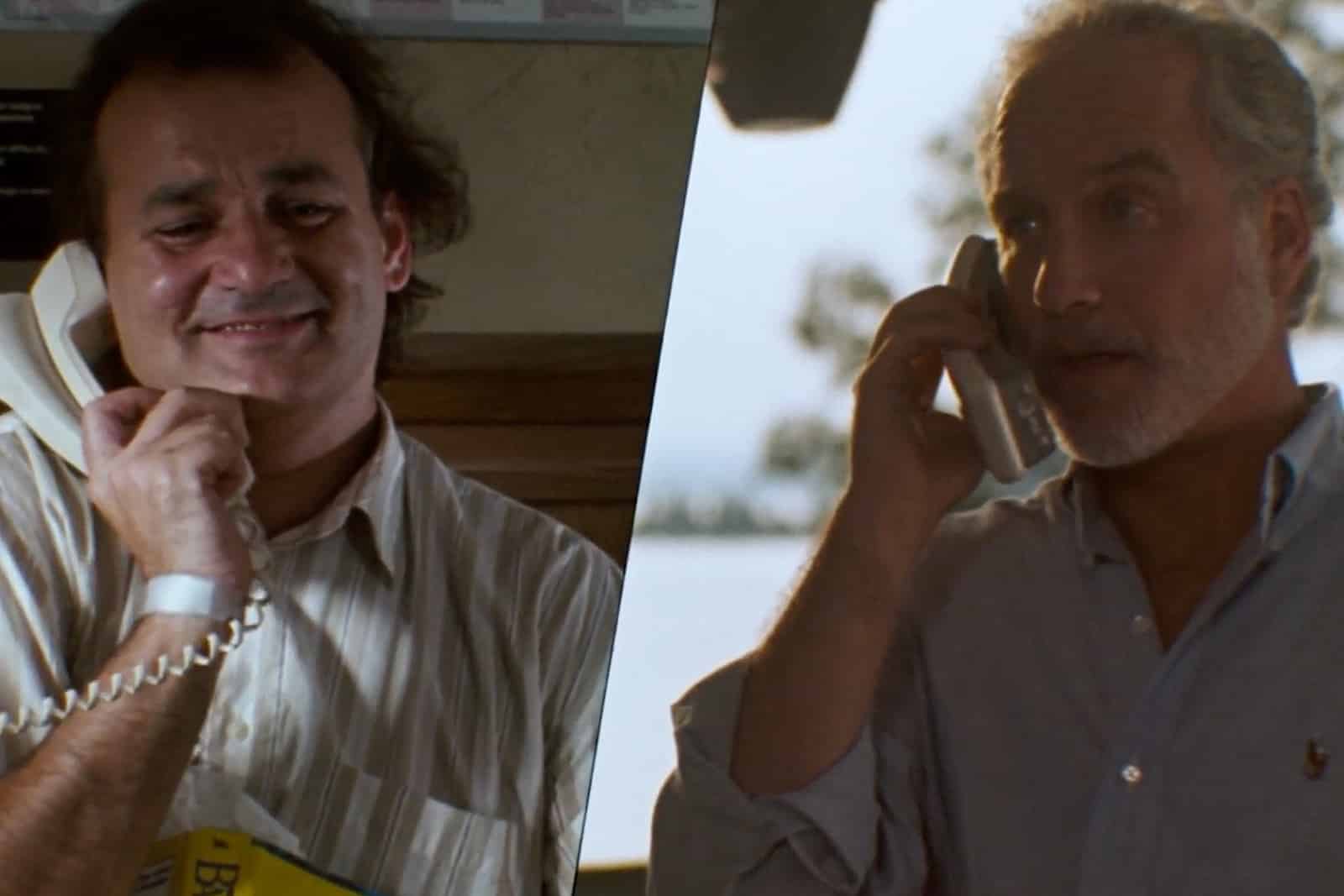 Fortunately, the movie performed well at the box office, earning $63.7 million on a $39 million budget. Murray went on to star in the massively successful Groundhog Day and Lost in Translation, and won the Mark Twain Prize for American Humor in 2016.

Dreyfuss, meanwhile, won praise for 1995’s Mr. Holland’s Opus but has since drifted away from major Hollywood films and leading roles. He has become closely involved in political campaigns, promoting free speech and civic education. Since What About Bob?, he and Murray have never met again. But Dreyfuss has said he is willing to make amends some day. 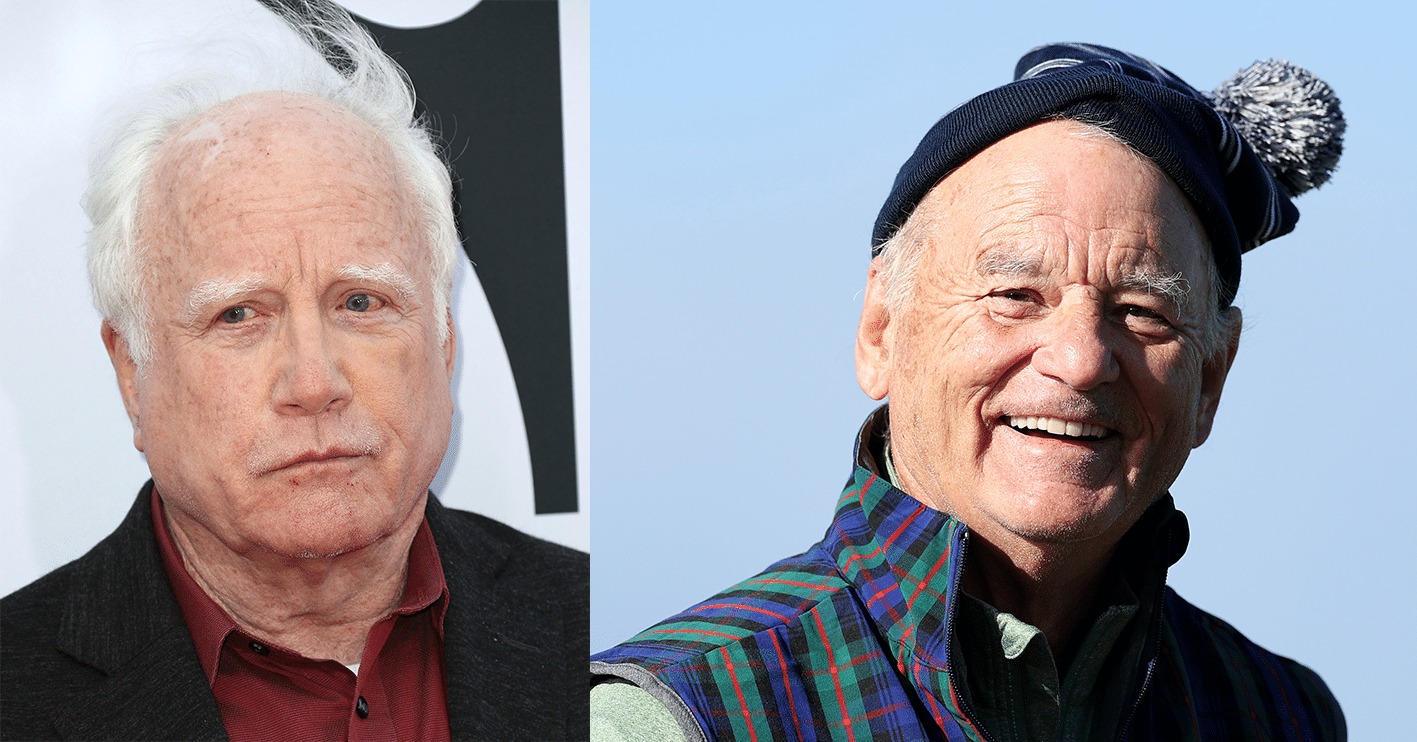 To this day, Dreyfuss has mixed feelings about his old co-star, noting: “Bill Murray is a pig. What really irritates me about him is that he’s a good golfer and I’m not and also, he’s funny enough that, even now, although I loathe him, he makes me laugh.”