“There Was Blood Everywhere”: What Really Happened To Shergar

On the night of 8 February 1983, Jim Fitzgerald was settling down for a quiet evening with his wife and children. Fitzgerald had just locked up at Ballymany Stud, where he worked as the head groom and which was then Ireland’s main racecourse and training grounds.

At 8.30pm, the doorbell rang at the Fitzgerald house and Jim’s teenage son Bernard ran to see who was visiting. Moments later, Fitzgerald found himself held at gunpoint and surrounded by masked men. They told him, “We have come for Shergar.” 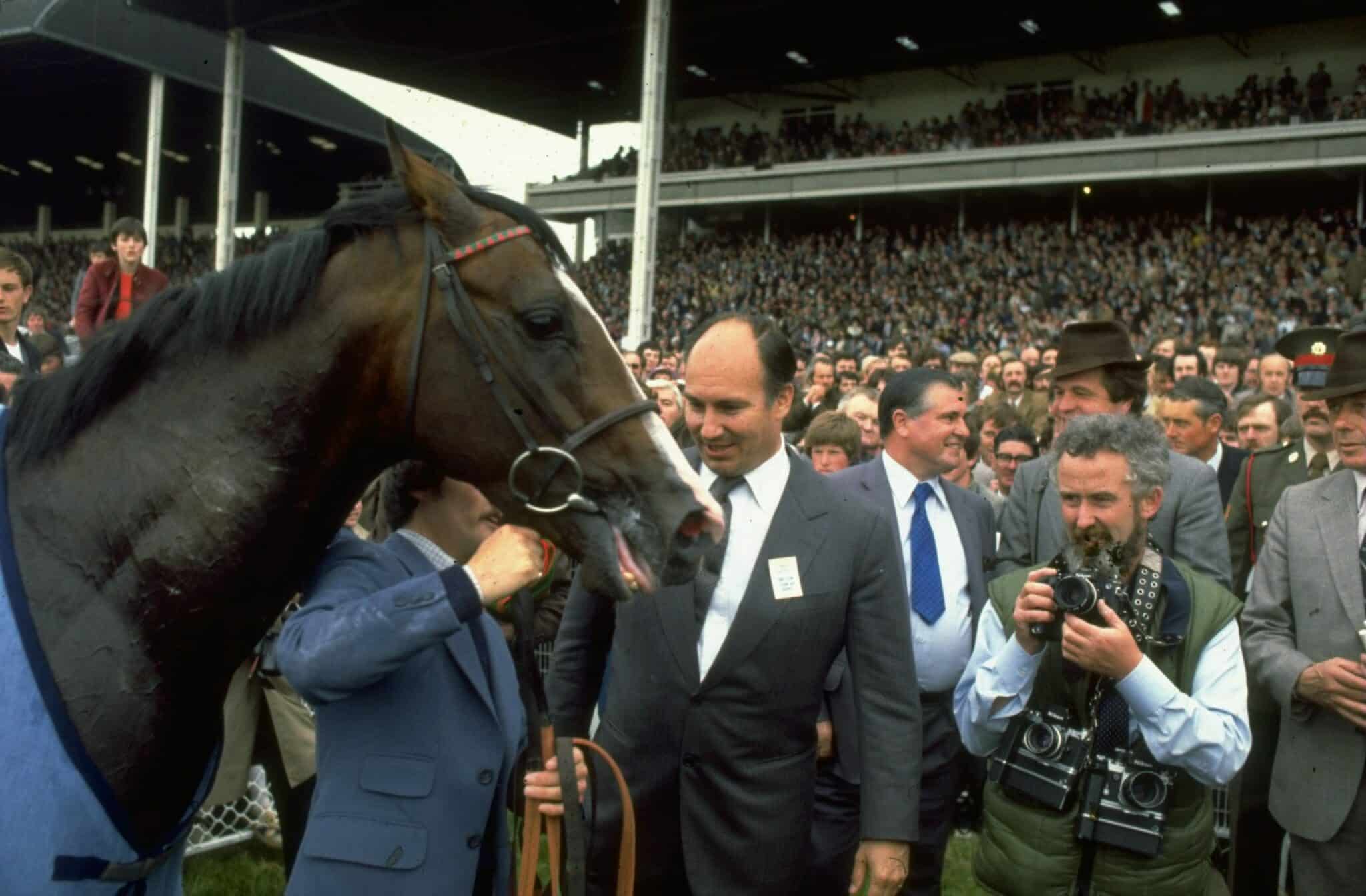 A Thoroughbred stallion, Shergar was born in 1978 at Sheshoon, a private stud in County Kildare, Ireland. Shergar’s owner, Shāh Karim al-Husayni, Imam of the Muslim community Nizari Ismailis, was born in Geneva and claims descent from Muhammed. Also known as Aga Khan IV, he invested an inherited fortune in luxury hotels to become a multi-billionaire and philanthropist.

To this day, racehorses are the Aga Khan’s great passion – and he owns hundreds of them.

Shergar was sired by Great Nephew, a British horse who won the Prix du Moulin and Prix Dollar – but Shergar would go on to even greater success. Named after a village in the Himalayas, Shergar would receive training in Newmarket, England under the direction of Michael Stoute.

“He had a wonderful character and temperament,” Stoute has since recalled. “He was the kindest horse you could really have any dealings with.” 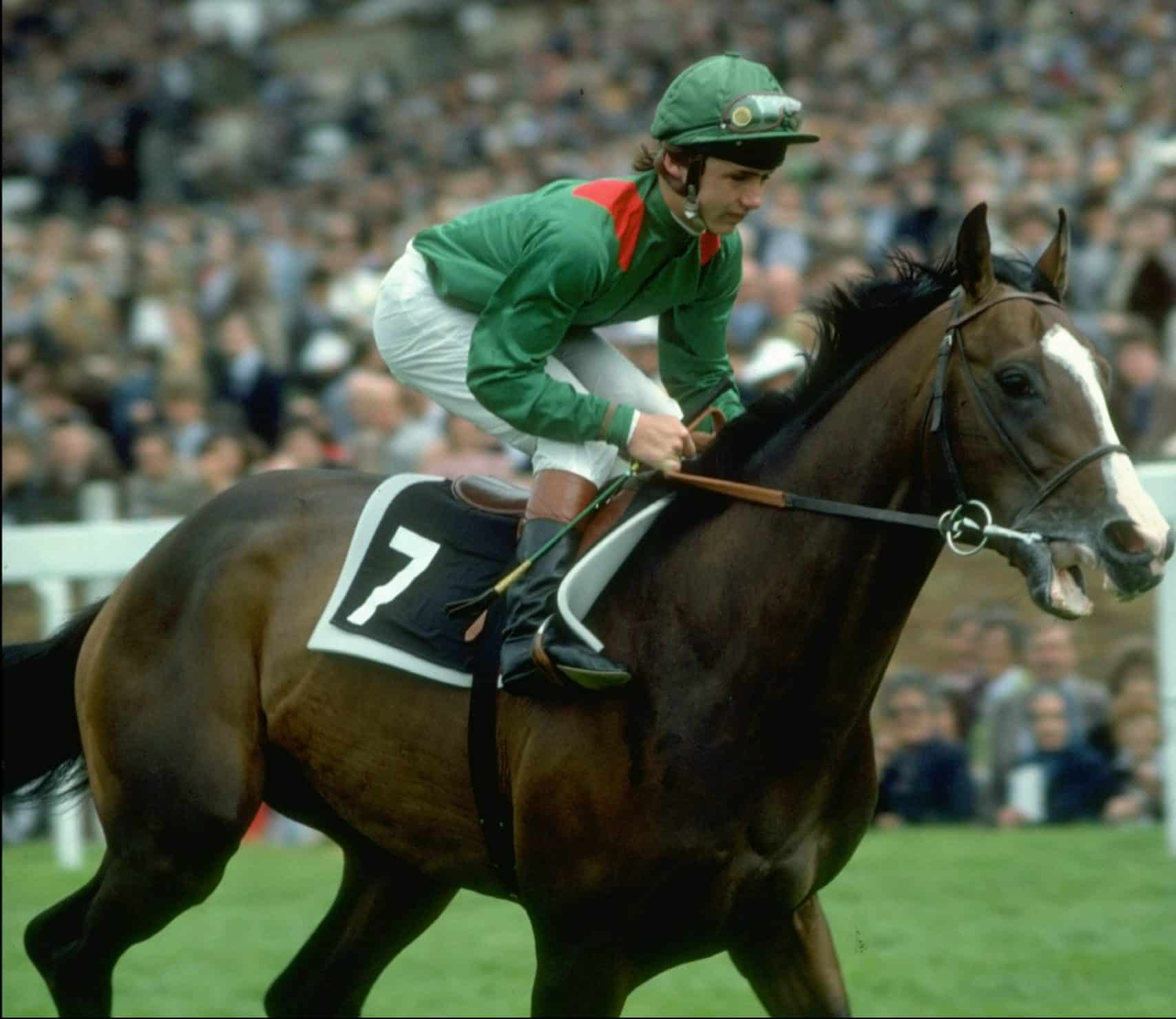 Shergar soon made his mark on the racing world. Dubbed the Wonder Horse, Shergar came first in six of his eight major races, and came second in the William Hill Futurity Stakes in 1980. Often leaving competition in the dust at his peak, Shergar won the 1981 Epsom Derby by ten lengths, marking the largest winning margin the race had ever seen.

Soon after these victories, however, Shergar made a shock loss at the St Leger Stakes in Doncaster. The Aga Khan later commented: “[Shergar] was just an exceptional athlete. All through the spring and summer he completely dominated European racing in a very dramatic manner, and after he had run so uncharacteristically in the St. Leger, we knew something had gone wrong, but we didn’t know what it was.”

The Aga Khan decided to cut his losses and retire the champion to the scenic Ballymany Stud in County Kildare, Ireland. There, Shergar would sire 36 foals: 17 colts and 19 fillies. Among them was Authaal, who would go on to be the winner of the 1986 Irish St Leger.

‘I can still remember that night’ 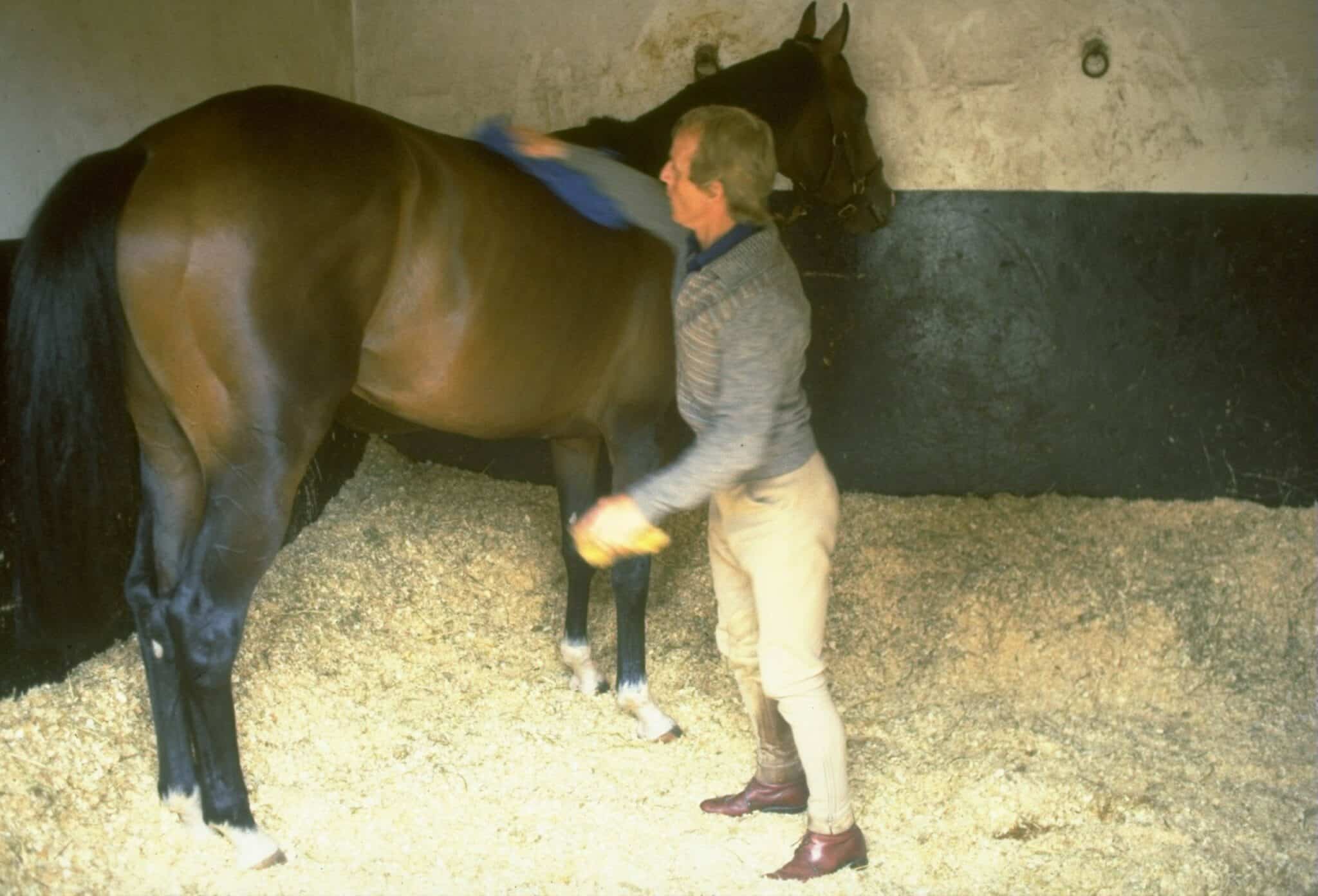 Shergar was five years old at the time of his kidnap. On the night of 8 February, 1983, a group of at least six masked men – possibly up to nine – approached the unfortunate Fitzgerald family at Ballymany Stud. The men, who were dressed in fatigues, forced Jim Fitzgerald out of the house and took him to Shergar’s stable, making him move the horse out to the thieves’ trailer. Meanwhile, two assailants stayed behind at the household to hold Fitzgerald’s family hostage.

But Fitzgerald’s ordeal was not yet over. The thieves ordered him to lie on the floor of a van, and then started to drive. “I can still remember that night in that car with them lads,” he later told the Telegraph. “All sorts of thoughts were racing through my head about what they might do to me. One of them, with a revolver, was very aggressive.”

The masked men drove Fitzgerald around aimlessly for three hours and then ordered him out into the dark countryside. They forbade him to contact the Irish police, threatening to murder his family if he did so. Instead, they ordered him to wait for a ransom message, and gave him the password ‘King Neptune’ to handle the hostage negotiations later. 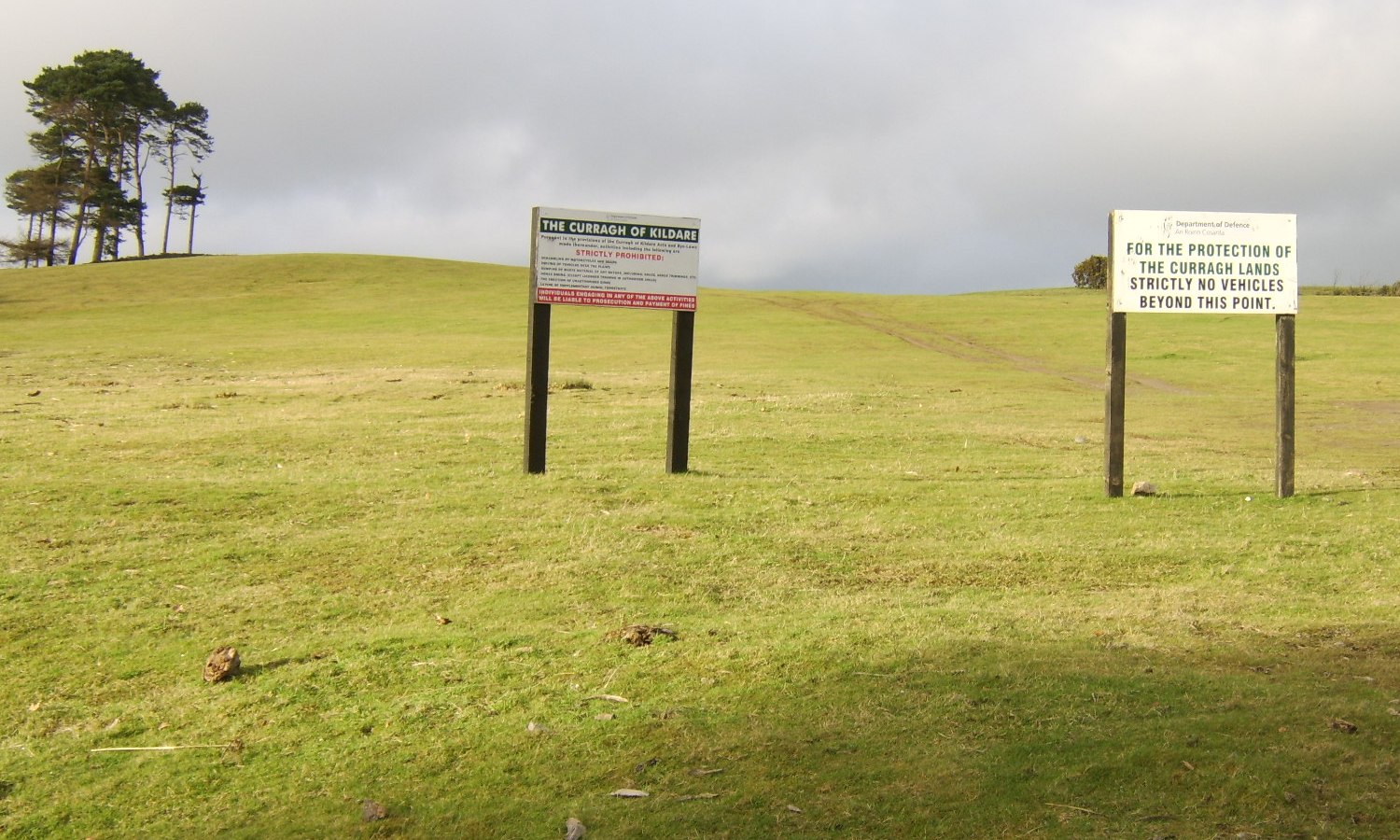 Fitzgerald detected one Northern Irish accent among the men, and another appeared to be at great ease while handling horses. But they left no other trace of their identities. After they drove away, Fitzgerald found his bearings and stumbled into the village of Kilcock, 20 miles from the stud.

Safe at last, Fizgerald called his brother for a ride home. He then rang the Aga Khan’s stud manager Ghislain Drion and told her about his horrendous evening. However, he pleaded with the manager to keep Shergar’s kidnap a secret from the police, citing the threat to his family.

Drion then contacted Shergar’s vet, as well as Sean Berry, the manager of the Irish Thoroughbred Breeders Association. In turn, Berry sought help from his friend Alan Dukes, who at that time was the serving Minister for Finance in Ireland. Dukes, along with the Minister for Justice Michael Noonan, urged Berry to contact the police (Gardaí).

After several attempts, Drion finally made contact with the Aga Khan in Switzerland, who likewise told him to call the Gardaí immediately. At around 4.30 a.m., Drion eventually called the Gardaí – at which point Shergar had been missing for almost eight hours. 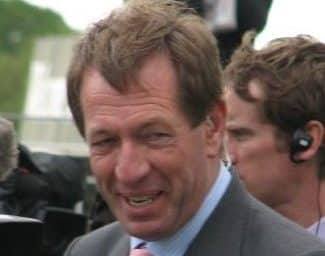 The anonymous thieves who pinched Shergar were quick to seek a ransom. Their first demand call took place before Fitzgerald had even made it back home. They made contact with Jeremy Maxwell, a horse trainer in Northern Ireland, and demanded £40,000 for Shergar’s safe return. Unfazed, Maxwell told the thieves that he was only willing to negotiate via three British racing journalists: Derek Thompson, John Oaksey and Peter Campling.

He told the thieves to meet the journalists at Belfast’s Europa Hotel, which had developed the unfortunate title of Europe’s most bombed hotel as a result of the Troubles.

At the Europa, the journalists received new instructions from the Gardaí to relocate to Maxwell’s house. Thompson had a phone call with the thieves which lasted only 80 seconds, too short a timespan for the call to be traced. Maxwell’s phone kept ringing, and at long last, Thompson succeeded in keeping the caller on the line for more than 90 seconds, making it possible to trace the number.

Frustratingly, as it was 1.30 in the morning, the Gardaí’s phone interceptor had gone home. 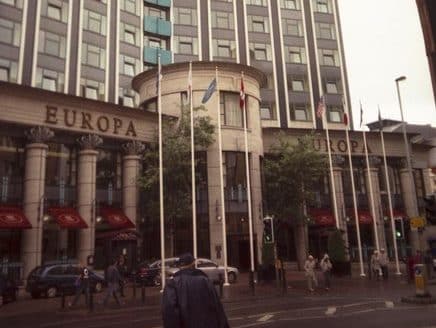 This wasn’t the thieves’ only line of attack. After stealing Shergar, the crooks contacted the Ballymany Stud directly on 9 February, and spoke to Ghislain Drion, a French speaker who struggled to understand the thieves’ heavy Irish accent. In this attempt, the thieves demanded £2 million, and offered Drion a contact number in France.

Negotiations then moved to the Aga Khan’s office in Paris, where staff worked alongside strategic consulting firm Control Risks. Over four days, they tussled over phone calls with the thieves, and demanded proof that Shergar was alive.

Surprisingly, the thieves complied, sending several Polaroid pictures of Shergar’s head to Ireland’s Rosnaree Hotel on 12 February. They positioned Shergar next to the daily newspaper to prove the date. 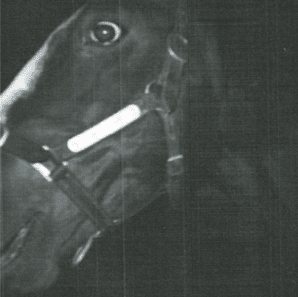 However, in a somewhat gory twist, the negotiators did not accept this evidence as they theorised that Shergar could be dead in the photos. The callers then said, “If you’re not satisfied, that’s it”, and hung up with no further contact.

The Aga Khan stalled on paying a ransom to Shergar’s kidnappers as a matter of principle. Not only could the money and Shergar both vanish – it could also encourage future horse kidnappings in Ireland.

Shergar shareholder Lord Derby summarized: “If ransom money is paid for this horse, then there is a danger of other horses being kidnapped in the years to come – and that simply cannot be tolerated.”

‘It cannot be tolerated’ 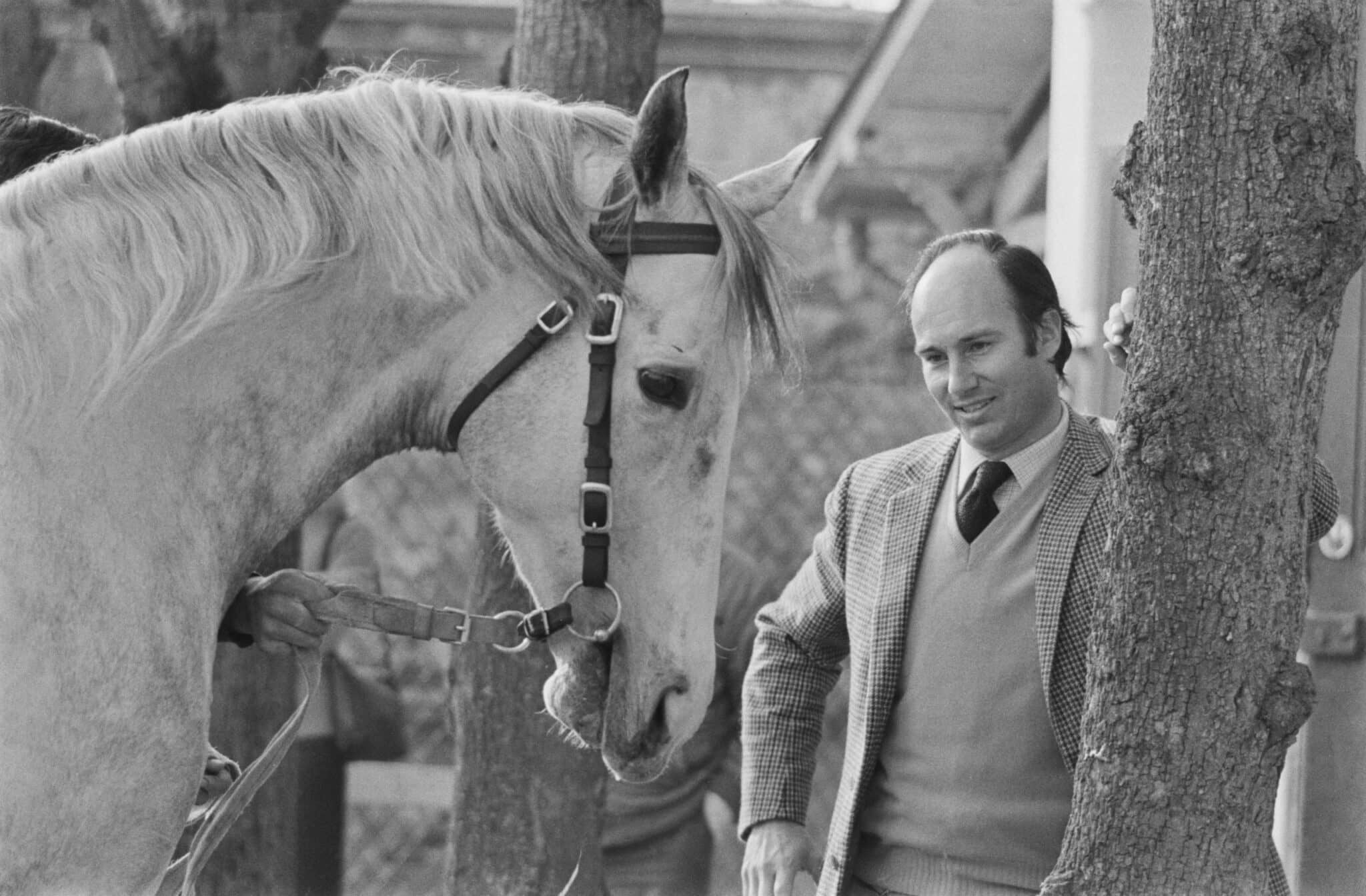 Meanwhile, efforts by the Gardaí to track down Shergar were hindered by the eight-hour delay in the theft report.

Chief Superintendent James Murphy was in charge of the case, and stated to the press early in the investigation: “I have no leads.” He also quipped, “A clue? That is something we haven’t got”. However, he intentionally withheld several details from the press, including the discovery of a Steyr MPi 69 submachine gun that was traced to the thieves.

This gun indicated that the thieves could be linked to a particular IRA unit in South Armagh. Police also released a description of the light green or blue horsebox with broken lights, in which the thieves transported Shergar. 70 detectives scoured the county without success, although they did uncover several IRA explosives caches and safehouses during their efforts. 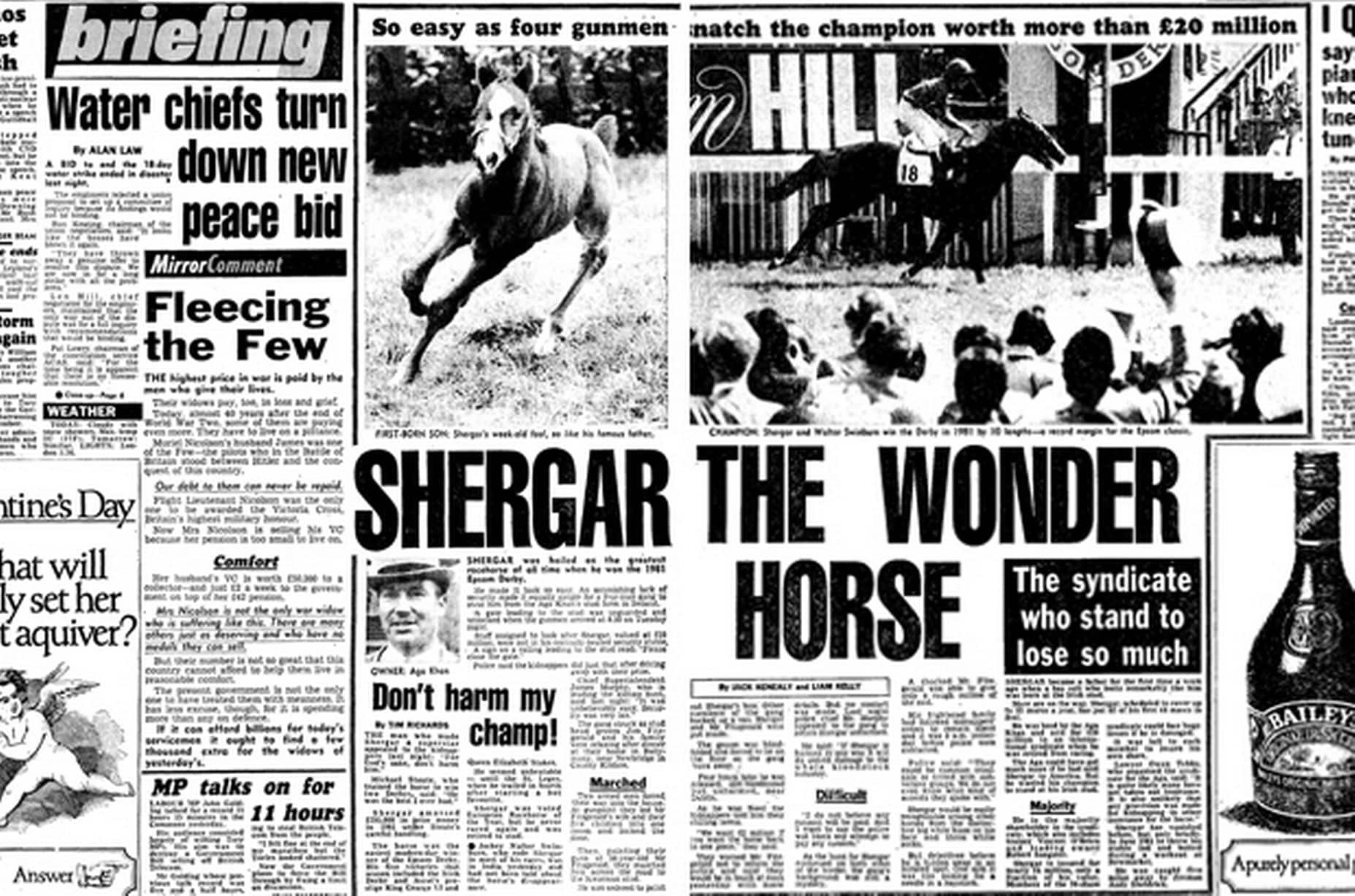 At 7am on 12 February, after the unsuccessful attempts to trace the kidnappers’ calls, the Maxwells’ phone picked up a final call. The thieves declared that the negotiations were over and that Shergar was dead.

Although many later speculated that these calls were a hoax, the callers had provided the secret code King Neptune to prove their identity.

The Shergar case gripped the nation. Murphy had even been approached by various “diviners, clairvoyants and psychic persons – they’re in three different categories – they must be running into the fifties now”. Despite the Gardaí’s best efforts, the case struggled and was eventually downsized and abandoned. Shergar has never been found.

But the end of the case did not deter others on the hunt.

Lord Lucan and the Mafia 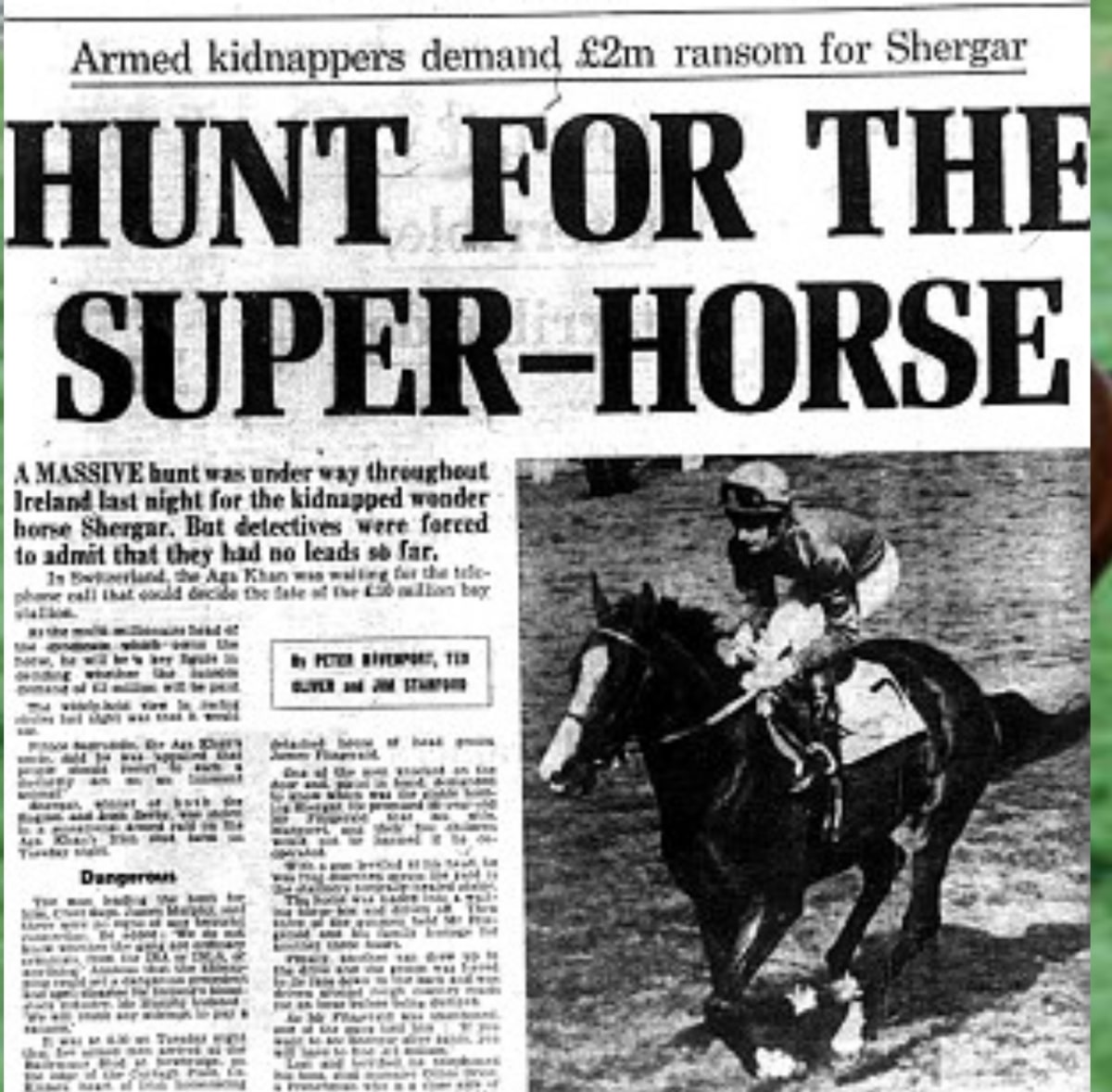 In 2008, the Sunday Telegraph took a closer look at the cold case. The newspaper linked the theft to senior IRA chiefs, and claimed that Shergar was taken to a remote Irish farm during the negotiations.

The theory that the IRA kidnapped Shergar remains the most popular. In 1999, the IRA officially admitted to kidnapping nine people during the Troubles – but the organisation has never claimed the Shergar incident.

After their efforts to secure a ransom were frustrated, the IRA allegedly decided to release Shergar – but soon realised that the police search would turn the horse into key evidence about the IRA’s dealings and secret locations.

As a result, one source later reported to the Sunday Telegraph, Shergar met a brutal end. “Shergar was machine-gunned to death,” the anonymous figure claimed. “There was blood everywhere and the horse even slipped on his own blood. There was lots of cussin’ and swearin’ because the horse wouldn’t die. It was a very bloody death.” 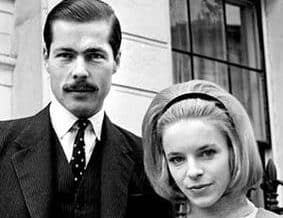 According to both the BBC and the Sunday Telegraph, Shergar’s body was most likely buried in a bog. Others, however, have speculated even more extraordinary fates that may have befallen Shergar.

At the time of Shergar’s kidnap, a litany of dramatic theories arose in the press. One tabloid claimed that Colonel Gaddafi was behind Shergar’s kidnap, in an arms deal with the IRA. The newspaper Sunday Sport reported that a reader had spotted the missing Lord Lucan riding Shergar.

The Sunday Sport also presented the theory that the Mafia had stolen Shergar in an act of revenge against the Aga Khan. The Observer racing correspondent Richard Baerlein noted: “The press speculation was remarkable for its enthusiasm and its inaccuracy over a long period of time.”

It is testament to Shergar’s legendary status that rumours about him swirl to this day. His dual fame – as both a champion and an enduring mystery – secured his place in the hearts and minds of racing fans for generations to come.