Perhaps the most unlikely candidates for rock superstardom ever, Texan trio ZZ Top nonetheless wound up being one of the best-known, best-selling musical acts of the 80s. Thanks to their signature hats, shades and above all their mighty beards, ZZ Top certainly didn’t look like any other band in the world, and they had a sound which was all their own as well; classic, dirty rhythm and blues given a distinctly modern twist, with the addition of drum machines and synthesisers on their 80s recordings.

Did you know the following facts about the Gimme All Your Lovin’ hit-makers?

10. Drummer Frank Beard is the only non-bearded member of the band

ZZ Top are guitarist and vocalist Billy Gibbons, bassist and vocalist Dusty Hill, and drummer Frank Beard. It has of course long been noted as ironic that Beard, despite his moniker, is the one member of the trio not blessed in the facial hair department. While the drummer has flirted with a full beard over the years, generally he’s kept to just a moustache or goatee.

As hard as it may be to imagine now, Gibbons and Hill didn’t always sport such luxuriant chin-warmers. They’d already been playing as ZZ Top for a decade before the two men adopted the distinctive look, and it wasn’t a contrived move: reuniting after a long vacation, both Gibbons and Hill had allowed their beards to grow, and they decided to keep them. 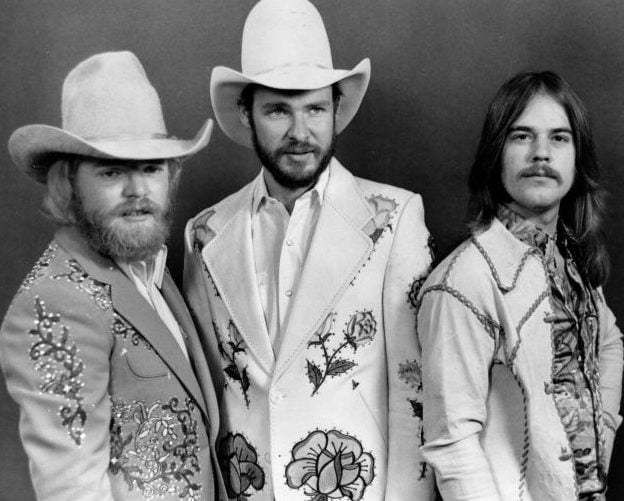 Billy Gibbons originally formed ZZ Top in 1969. As a blues aficionado, Gibbons conceived of the name as a play on blues legend BB King. After considering going by ZZ King, Gibbons settled on ZZ Top after reasoning, “the king is going at the top.”

Gibbons initially played alongside bassist Lanier Greig and drummer Dan Mitchell. They were soon replaced by bassist Billy Ethridge and drummer Frank Beard; then when Ethridge quit, Dusty Hill joined, and that line-up has remained firm since 1970. 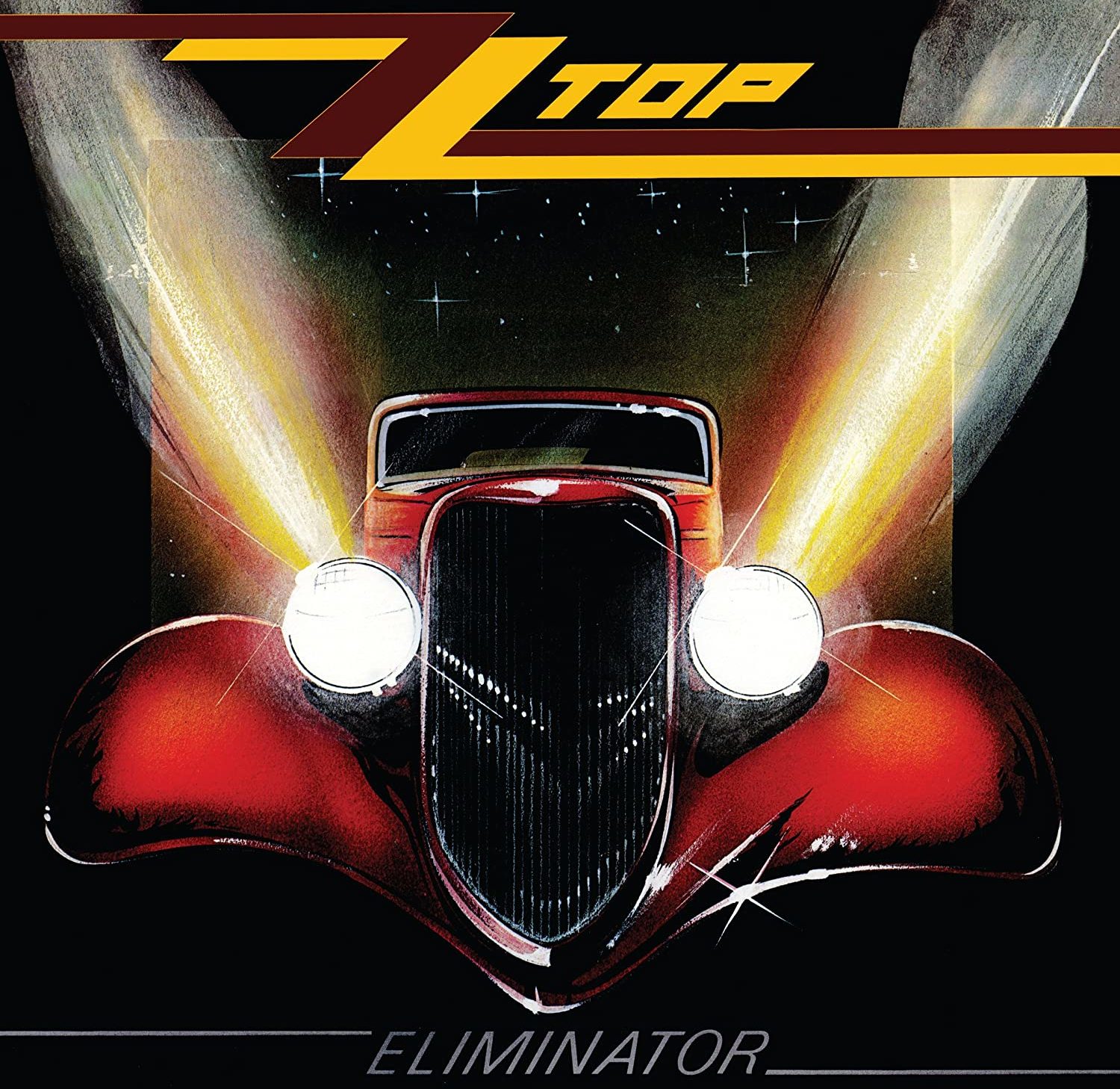 To date, ZZ Top have released 15 studio albums, four live albums, and eight best-of compilations. Overall, these have shifted over 50 million units worldwide (25 million in the United States alone), which puts them up there among the 30 biggest-selling rock artists ever. ZZ Top’s biggest selling album overall is 1983’s Eliminator, which features some of their best loved songs including Gimme All Your Lovin’, Sharp Dressed Man and Legs.

Eliminator has diamond record status in the US with sales of over 10 million; it’s also gone multi-platinum in the UK, France, Australia and Finland.

7. They once rejected a $1 million offer from Gillette to shave their beards off 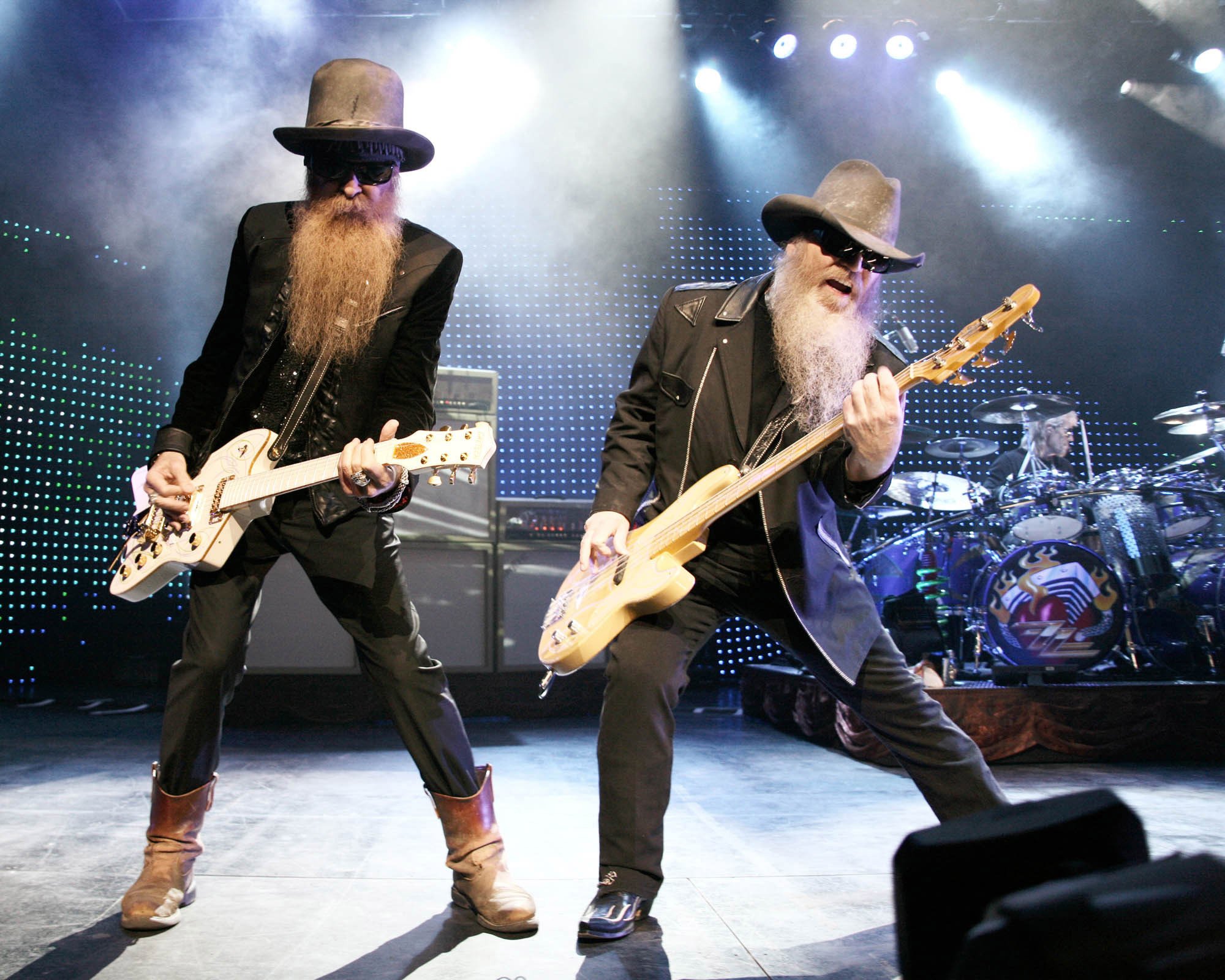 At the height of the band’s success in 1984, ZZ Top were approached by none other than men’s shaving giants Gillette with a lucrative offer to appear in an ad campaign. Billy Gibbons and Dusty Hill were offered a cool $1 million to shed their beards for the proposed ad – but they said no.

Reflecting on the offer in 2012, Gibbons said there were no regrets, and they still wouldn’t do it today, explaining, “The prospect of seeing oneself in the mirror clean-shaven is too close to a Vincent Price film.”

6. Jimi Hendrix named Billy Gibbons one of his favourite guitarists 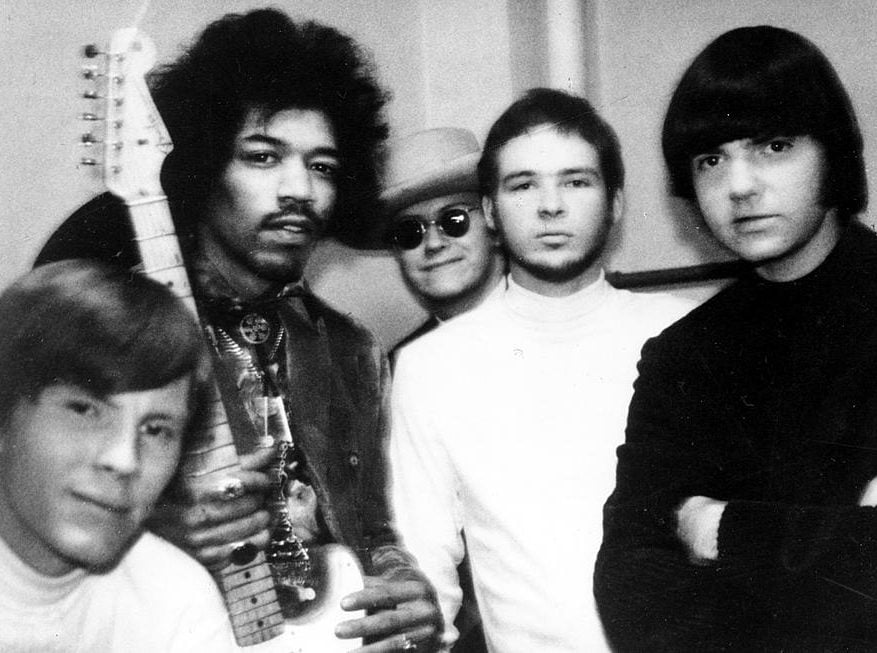 Before forming ZZ Top, guitarist Billy Gibbons played with another band, Moving Sidewalks, who got their biggest break as the opening act for the late rock legend Jimi Hendrix on a tour of the US. (Gibbons is dressed in white to Hendrix’s left in the photo above, unrecognisable without the facial hair and hat!)

The two became friends, and Hendrix would name Gibbons one of his personal favourite guitar players in interviews.

5. The hot rod featured in their music videos belongs to Billy Gibbons

ZZ Top could be said to have a fourth member in the iconic red hot rod featured in most of their music videos, and on the cover of their album Eliminator. ‘The Eliminator’ is in fact the car’s nickname, and it actually is the property of guitarist Billy Gibbons, who had it custom made in the early 80s.

Built to Gibbons’ specifications by California auto shop Don Thelan’s Buffalo Motor Cars, the Eliminator is constructed mainly from 1930s Ford parts. It’s made all the more distinctive by the detail of the ZZ Top logo along the sides.

4. They once went on tour with a buffalo, rattlesnakes and other dangerous wild animals 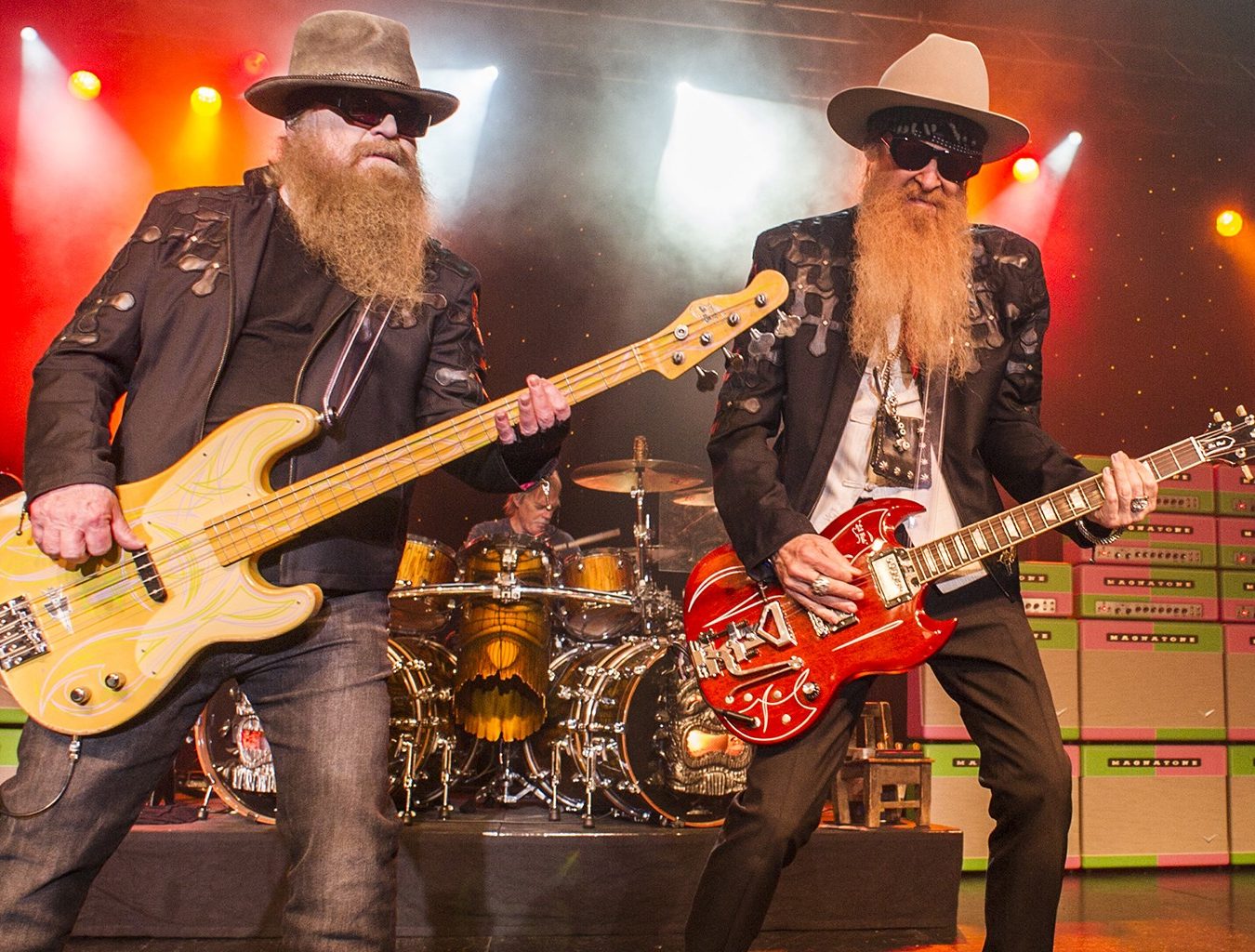 Stadium rock really took off in the 1970s, and every major band out there was competing to put on a bigger and wilder show. To this end, ZZ Top embarked on the Worldwide Texas tour in 1976, with which they hoped to bring a taste of their home state to international audiences. This bold tour saw the band joined onstage by a menagerie of wild animals native to Texas, among them a wild buffalo, venomous rattlesnakes, tarantulas and vultures.

It sounds crazy and more than a little unsafe, but Gibbons insists “animal rights groups were always present to make sure that these critters were being taken proper care of.”

3. They recorded original songs for Back to the Future Part III and From Dusk Till Dawn

Considering that ZZ Top look a bit like they’ve fallen directly out of the Old West, the band were the natural choice to provide the theme song for 1990’s Back to the Future Part III, the final instalment in the time-travelling comedy series, which is set largely in 1885. The ZZ Top track Doubleback features on the film’s end credits, and the band also appear in the film itself playing an old-fashioned acoustic rendition of the song.

This isn’t the only original track ZZ Top have written and recorded for a movie: there’s also She’s Just Killing Me, featured in Robert Rodriguez and Quentin Tarantino‘s 1996 crime thriller/vampire horror From Dusk Till Dawn.

2. Their music has been played in outer space 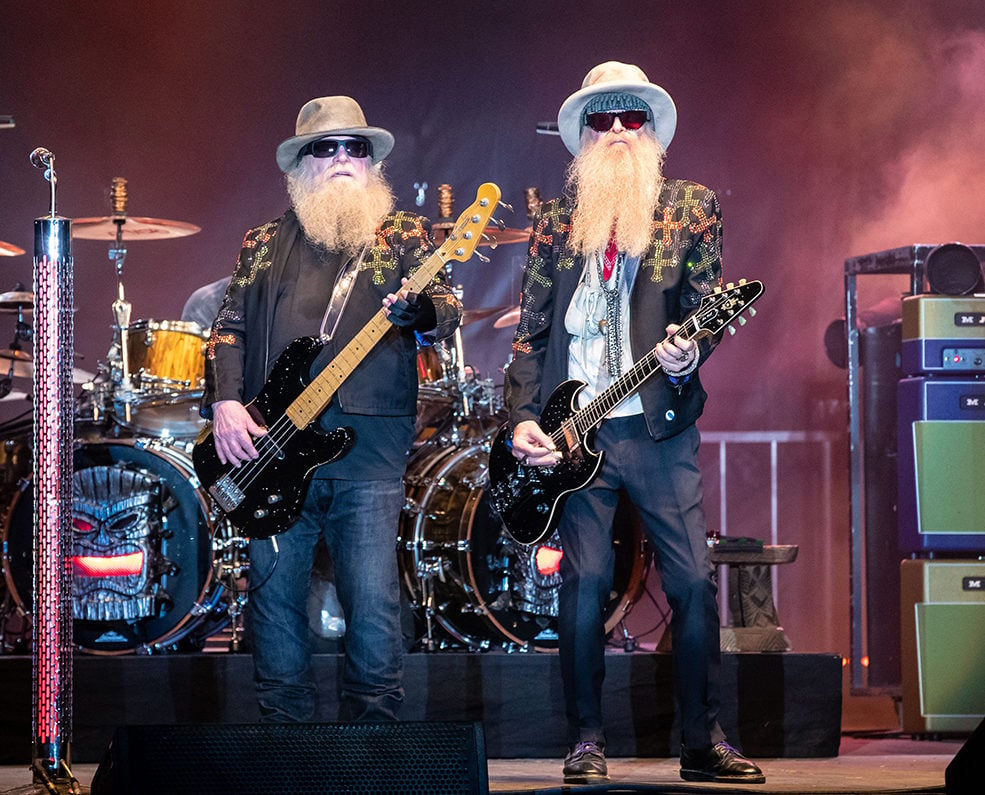 ZZ Top’s music is known throughout the world, and it’s even been played in outer space. In 2011, their previously unreleased song Flyin’ High was played publicly for the first time on the spacecraft Soyuz whilst it was en route to the International Space Station.

Unfortunately this was just a pre-release recording of the track, and ZZ Top did not actually perform it in space themselves, although we’re sure it was an epic moment nonetheless.

1. Their song I Gotsta Get Paid is a cover version of a 1998 rap record

You’d be forgiven for thinking that, particularly in more recent years, a band as old as ZZ Top would stick to their roots in old fashioned blues rock, but even now the band take a sometimes surprisingly eclectic approach. Their 2012 single I Gotsta Get Paid – the band’s last commercially released single to date, taken from their album La Futura – might sound like vintage ZZ Top, but it’s actually a cover of a rap record.

The track is a reworking of 25 Lighters by DJ DMD featuring Lil’ Keke & Fat Pat. DJ DMD and company are from ZZ Top’s hometown of Houston, Texas, where the original recording of the song was a big hit in 1998.