20 Celebrity Doppelgängers That Will Make You Look Twice

Sometimes we meet people in life and think ‘hang on a minute, haven’t I seen you somewhere before?’ This can be especially said of celebrities, who are regularly gracing the screens of our televisions, the pages of our magazines and the adverts on our billboards. What can be especially confusing, however, are celebrities that look like other celebrities.

Before you go running off to Specsavers thinking that you have double vision, have a look again at the 40 celebrities who look so alike they could be twins. You might be seeing double, but it’s nothing to do with optic trickery. You don’t need glasses just yet. 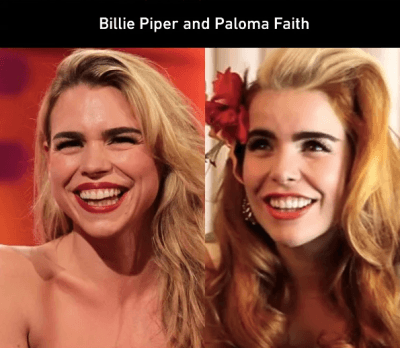 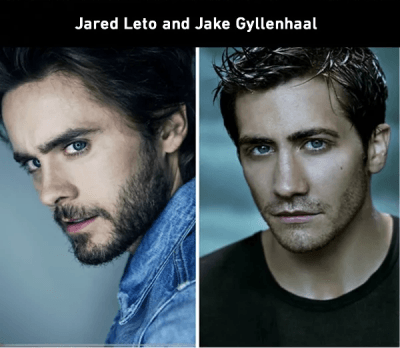 Jared Leto, the Thirty Seconds to Mars founder and frontman, has recently shot into the limelight on the big screen portraying comic-classic ‘The Joker,’ in DC’s Suicide Squad movie. Gyllenhaal is best known for his work opposite Heath Ledger in Brokeback Mountain and in disaster movie The Day After Tomorrow. 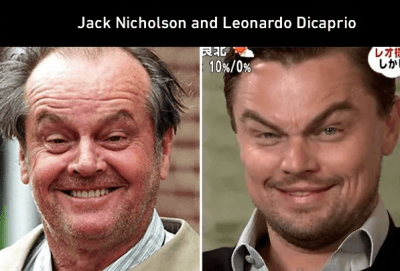 Perhaps not the most obvious match, Nicholson and Dicaprio sure do look fairly similar in the above image. Nicholson will forever haunt people’s nightmares after his performance in Stanley Kubirck’s The Shining whilst Dicaprio will occupy our dreams for other reasons (just like he did in Inception.) 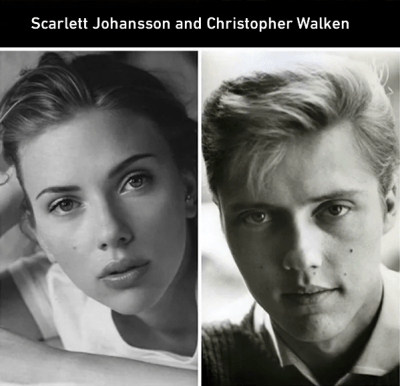 Perhaps one of the most ‘out-there’ ones in this post, here the beautiful Scarlett Johansson is compared with the…err…beautiful Christopher Walken? This is obviously an old image of the veteran American actor. 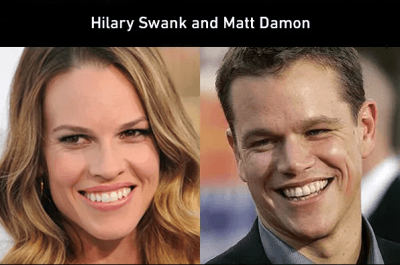 Another boy/girl comparison, we can’t deny a similarity between the P.S I Love You actress and The Bourne Identity star, Matt Damon. It has been recently rumoured that Damon is soon going to be making the move to Australia. 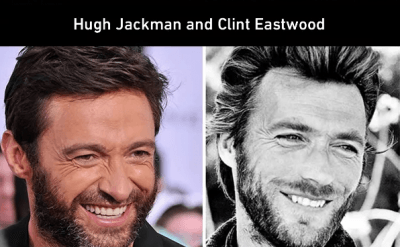 Here are two greatest actors of the time, Hugh Jackman and Clint Eastwood. Jackman has recently starred in the hit-music phenomenon The Greatest Showman. This isn’t the first musical in which Jackman has starred in, playing Jean Valjean in the 2012 smash Les Miserables. 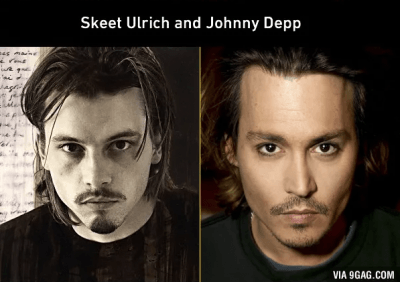 The similarity here is uncanny. Whilst one might not be very well know, the other is a household name (I mean, who hasn’t heard of Skeet Ulrich?) Ulrich’s most recent role is in the TV series Riverdale whilst Depp is currently tackling the part of dark wizard Grindelwald in J.K Rowling’s Fantastic Beasts and Where to Find them series. 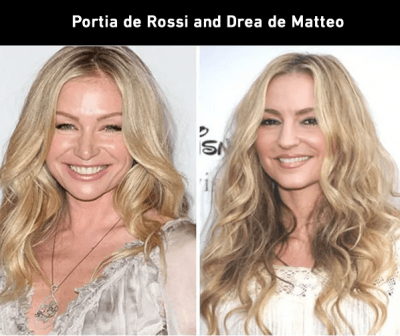 Portia De Rossi is an American/Australian actress, model and philanthropist married to TV host and comedian, Ellen Degeneres, whilst Drea De Matteo is best known for her role as Angie Bolen on ABC’s Desperate Housewives. 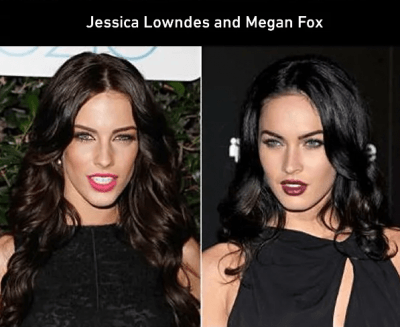 It must be something to do with the same, seductive eye-squint, the dark outfits and bright lips. Here, Jessica Lowdness and the Transformers actress/model Megan Fox look like sisters from another mister. 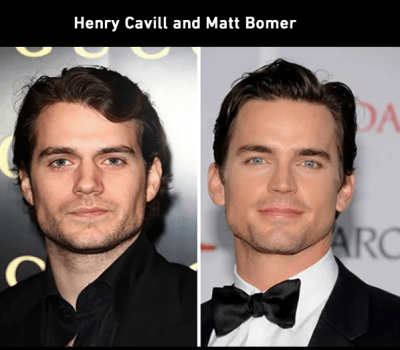 Is it a bird? Is it a plane? No – it’s Superman actor Henry Cavill alongside his perhaps lesser-known doppelgänger, Matt Bomer. Bomer has recently starred in films such as Magic Mike and The Magnificent Seven whilst Cavil is currently taking on the caped-Kryptonite, Superman. 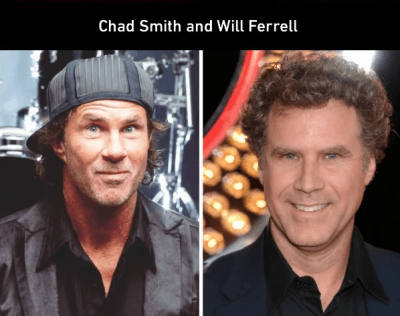 Here, funnyman Will Ferrel is put against musician and drummer, Chad Smith. Smith currently drums for the bad The Red Hot Chilli Peppers whilst Ferrell continued to star in a host of comedy-greats such as Anchorman and Daddy’s Home. 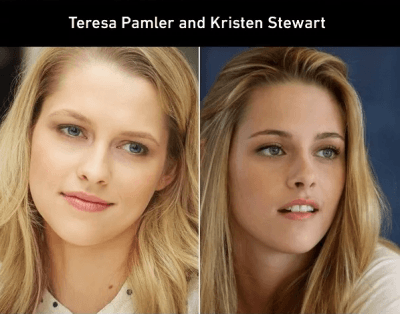 One is known for being vampire-loving Bella Swan in the Twilight saga and the other for her roles in Warm Bodies, Lights Out and Hacksaw Ridge. 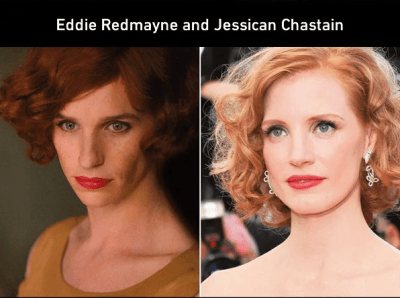 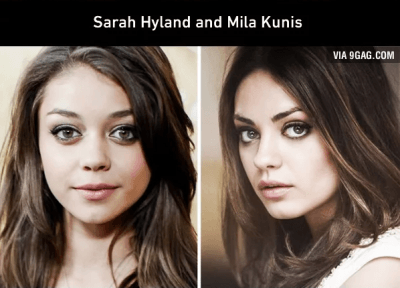 Wait? This isn’t the same person? Kunis voices the role of Meg Griffiths in American comedy-cartoon Family Guy and Hyland is perhaps the lesser known of the two, starring in…well…probably nothing you’ve ever heard of (like that film, Struck By Lightning? Nope – me neither.) 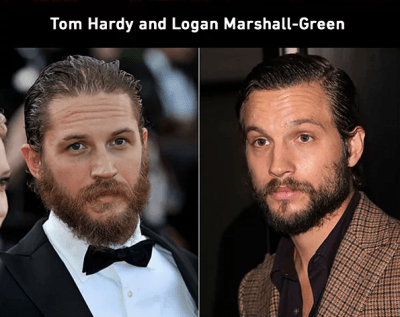 Uncanny! Absolutely uncanny! In this photo at least, Tom Hardy and Marshall-Logan Green could be practically the same person. Logan-Green is known for his roles in the television series 24, The O.C., Traveler, Dark Blue, and Quarry, and as Charlie Holloway in the 2012 Ridley Scott film Prometheus. Hardy has had many memorable roles including Bane in The Dark Knight Rises and as both of the Kray twins in Legend. 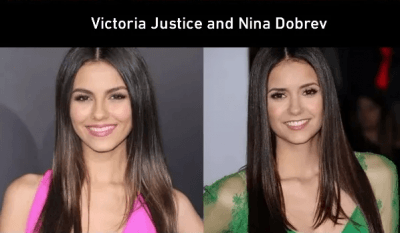 With sleek, straight hair and a dazzling smile, Victoria Justice and Nina Dobrev have it all. Both are actresses and both share similarly striking looks. 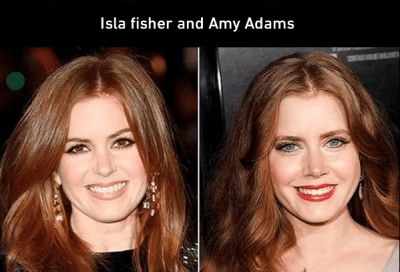 Here we have Isla Fisher and Amy Adams. Fisher recently starred in the Sacha Baron Cohen comedy Grimsby whilst Adams plays the part of Lois Lane and is among one of the highest-paid actresses in the world. 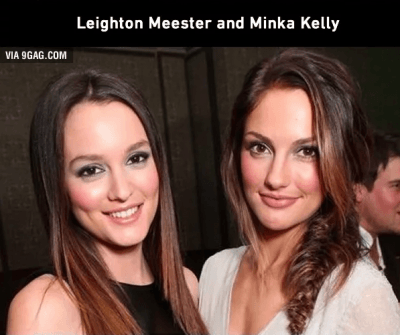 Here we have two of the doppelgängers featuring together in the same photo. What kind of inception trickery is this? Meester is an American actress, singer, songwriter, and model. She is known mostly for her starring role as Blair Waldorf on the television series Gossip Girl. Kelly is most known for her roles in the television shows Friday Night Lights, Parenthood, Charlie’s Angels, and Almost Human. 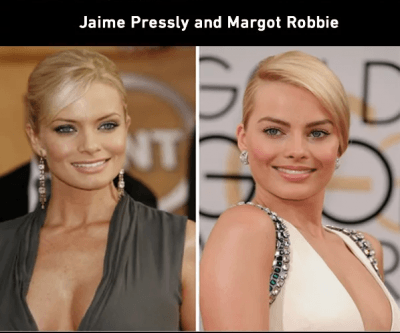 Huh? What sort of devilry is this? Jaime Pressly and Margot Robbie surely must have been split at birth? 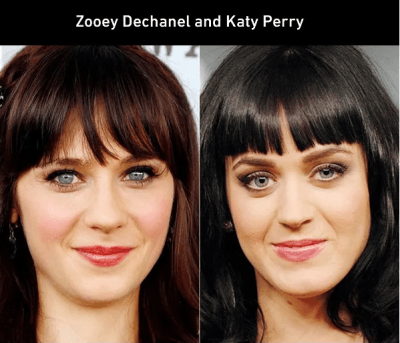 The age old Zooey Dechanel and Katy Perry debacle. Are they the same person? Have they ever been in the same room together? I guess the information’s out there if you care to look for it.

So there you go, that concludes our list of celebrity doppelgängers. Maybe you feel you need to get your eyes checked after all.