They married in 1985, following a whirlwind, highly-publicised romance. Just four years later, the Queen of Pop and the red-hot movie star were divorced.

It’s unclear what exactly happened between Madonna and Sean Penn to end their marriage. Madonna, who had already filed then withdrawn divorce papers in late 1987, finally divorced Penn in 1989 after tabloids claimed he had, over one night in December 1988, “trussed [Madonna] up like a turkey” before drunkenly beating and sexually assaulting her.

On the night of the alleged incident, Penn was arrested after a reportedly bloodied Madonna filed an assault complaint with the LA Sheriff’s Department – a complaint she later withdrew. Since then, both Madonna and Penn have denied that he was abusive in any way. What really happened on that night, though, remains peculiarly uncertain. 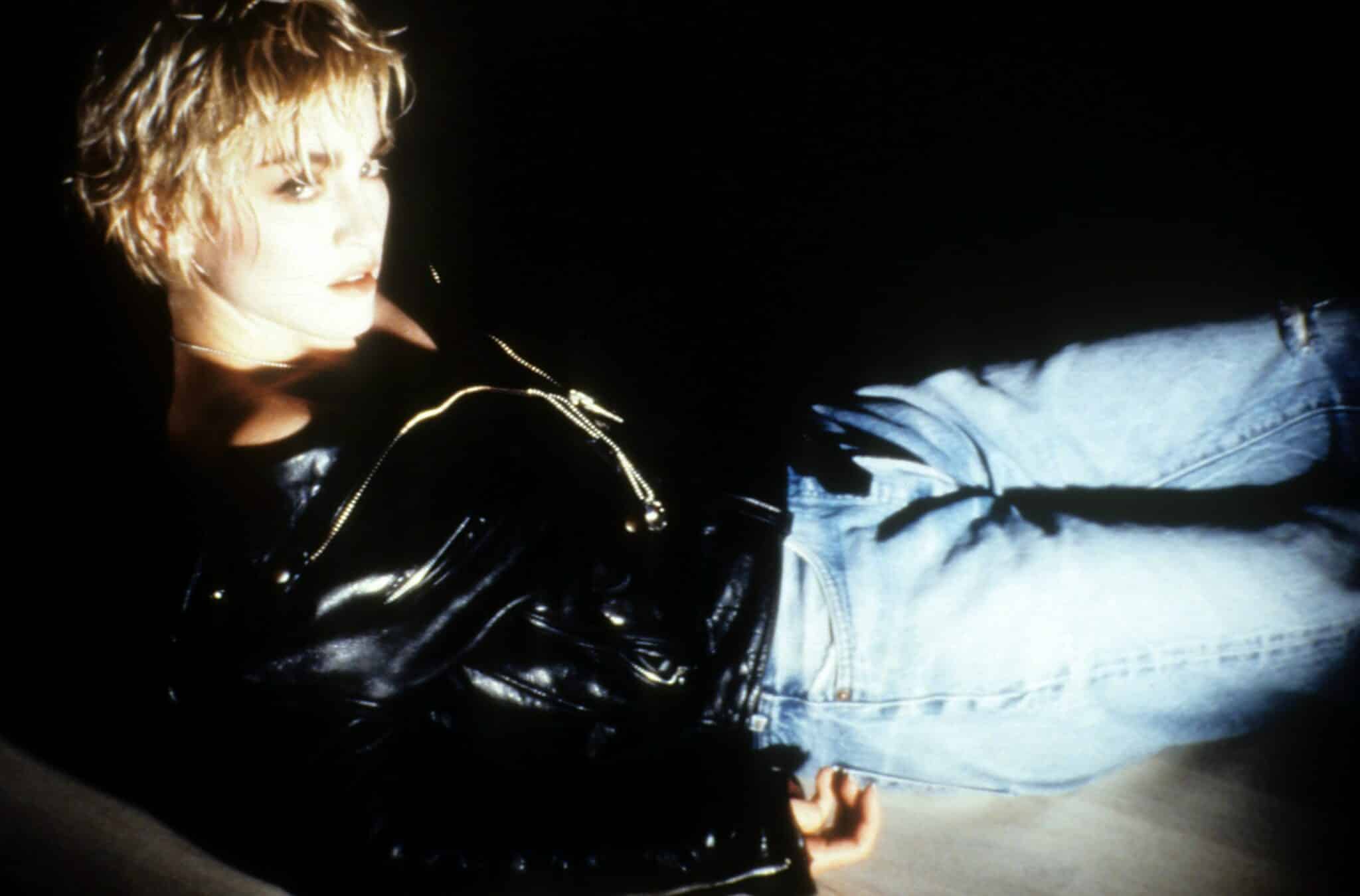 Born Madonna Louise Ciccone on August 16, 1958, the controversy-baiting pop star was in a former life a straight-A student from Michigan. Everything changed when, in 1978, Madonna dropped out of the University of Michigan to start a showbusiness career in New York City.

Originally finding work as a back-up dancer, in 1983 Madonna’s self-titled debut album shot to no.8 on the Billboard 200. Her follow-up album, 1984’s Like a Virgin, went to no.1. By 26, Madonna was already on her way to becoming a music superstar and global fashion icon.

It was while filming the music video for Like a Virgin single Material Girl that Madonna met Sean Penn for the first time. The son of actors Leo Penn and Eileen Ryan, Sean Penn was then a rising star in Hollywood thanks to memorable performances in films like Taps (1981) and Fast Times at Ridgemont High (1982). A friend of Material Girl music video director Mary Lambert, Penn – who had a crush on Madonna – took the opportunity to visit the set. 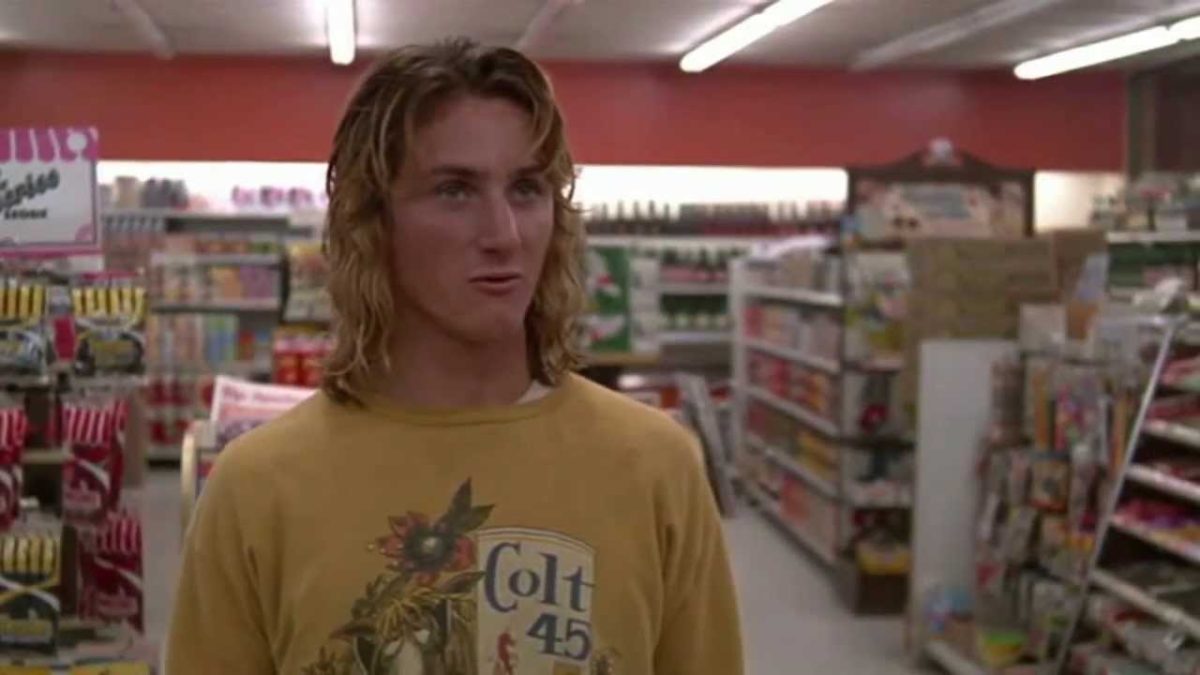 Madonna later recalled: “I was standing up at the top of these steps… and I looked down and noticed this guy in a leather jacket and sunglasses kind of standing in the corner, looking at me. And I realized it was Sean Penn, and I immediately had this fantasy that we’re going to meet and fall in love and get married. Which is exactly what happened.”

After striking up a conversation, Madonna gave Penn a single rose from her dressing room. A romance began, and after just six months of dating, the pair tied the knot in a seaside property in Malibu, where the roar of the paparazzi’s helicopters drowned out the couples’ vows. This reportedly triggered a disturbing flash of anger in Penn.

It was rumoured that Penn fired a gun at the helicopters, and according to the New York Post he later commented: “I would have been very excited to see one of those helicopters burn and the bodies inside melt.” After this incident, Madonna ordered Penn to lock his firearms away in a strongbox, threatening to leave him otherwise, according to the Seattle Times. 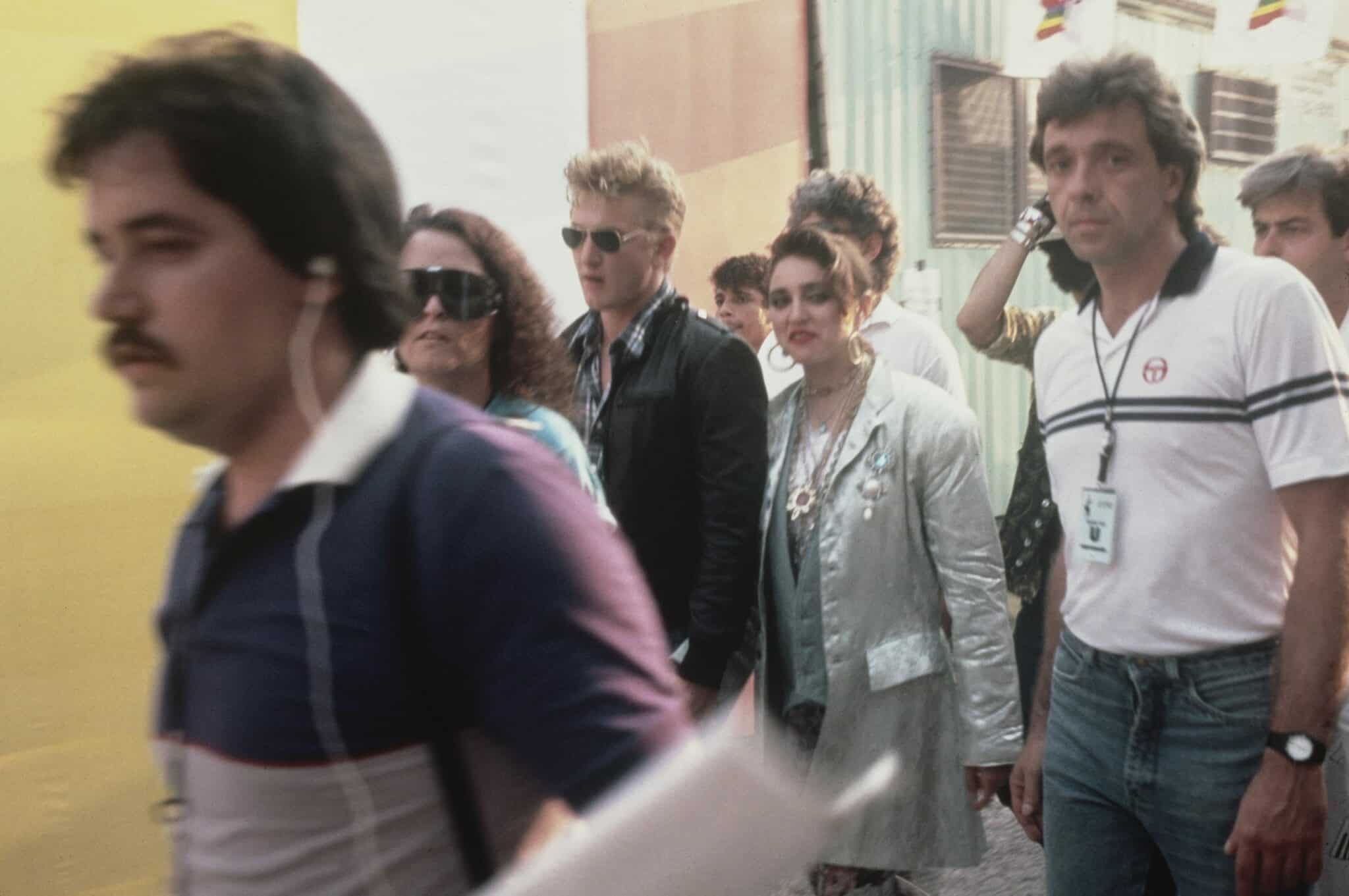 Their wedding took place on Madonna’s 27th birthday, with Penn turning 25 the following day. Their first year of marriage marked a particularly high-profile time for the couple, as Madonna dedicated her third album True Blue to her husband and they starred in the movie Shanghai Surprise together.

The couple’s reputation, though, was marred by Penn’s frequent violent interactions with the paparazzi. In 1985, Penn pleaded guilty to two counts of assault and battery against a British reporter and was given a suspended 90-day jail sentence.

In one of his more notorious moments, while filming Shanghai Surprise in Macao, Penn was enraged to find a paparazzi photographer hiding in the hotel room he shared with Madonna. Penn dangled the man over his ninth-floor balcony, after which the actor was charged with attempted murder. (Incredibly, the actor later reportedly slipped out of jail and fled the island on a jet ski.)

When another paparazzo attempted to photograph them as the couple entered their apartment one night, Penn reportedly said, “That’s it, now you’re on private property; you’re dead” and started punching the man as Madonna shouted, “How could you do this to us? You have no business being here.” 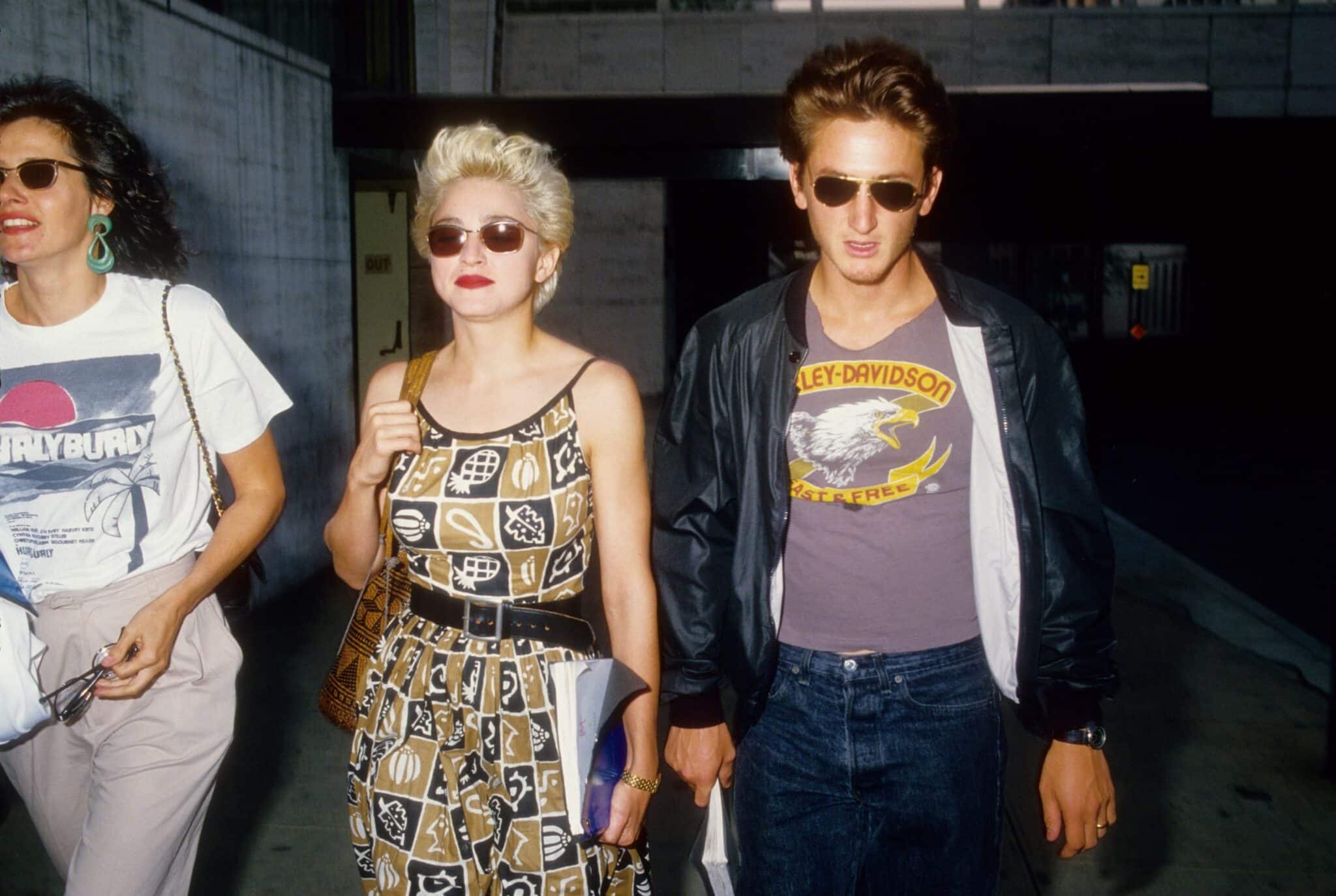 It wasn’t just the media who drew Penn’s ire. In April 1986, Penn saw Madonna chatting to her friend David Wolinski in a nightclub and proceeded to beat him up, later receiving a $1,000 fine. The following year, Penn served time in prison for a separate incident: 33 days for drink driving and probation violation.

At the time, Madonna noted that hers and Penn’s personalities clashed, but she argued that they tempered each other’s worse qualities. “I’m an impulsive person, and he thinks about things for a long time,” she said in 1987. “And he broods and he’s very suspicious in a lot of ways, and I’m trusting and gullible. He’s made me more tolerant. I think I’ve helped him to be funny.”

Soon, rumours began to emerge in the tabloid press that Penn was violent and abusive towards Madonna. Madonna’s friends and family disapproved of Penn, with her great aunt saying, “Penn was insanely jealous of her.”

Over the decades, a rumour has persisted that Penn at one point hit Madonna over the head with a baseball bat in 1987. The Washington Post, The Daily Beast, news.com.au and The Sunday Times have all reported on the rumour, without naming any direct sources. Madonna has since denied it. 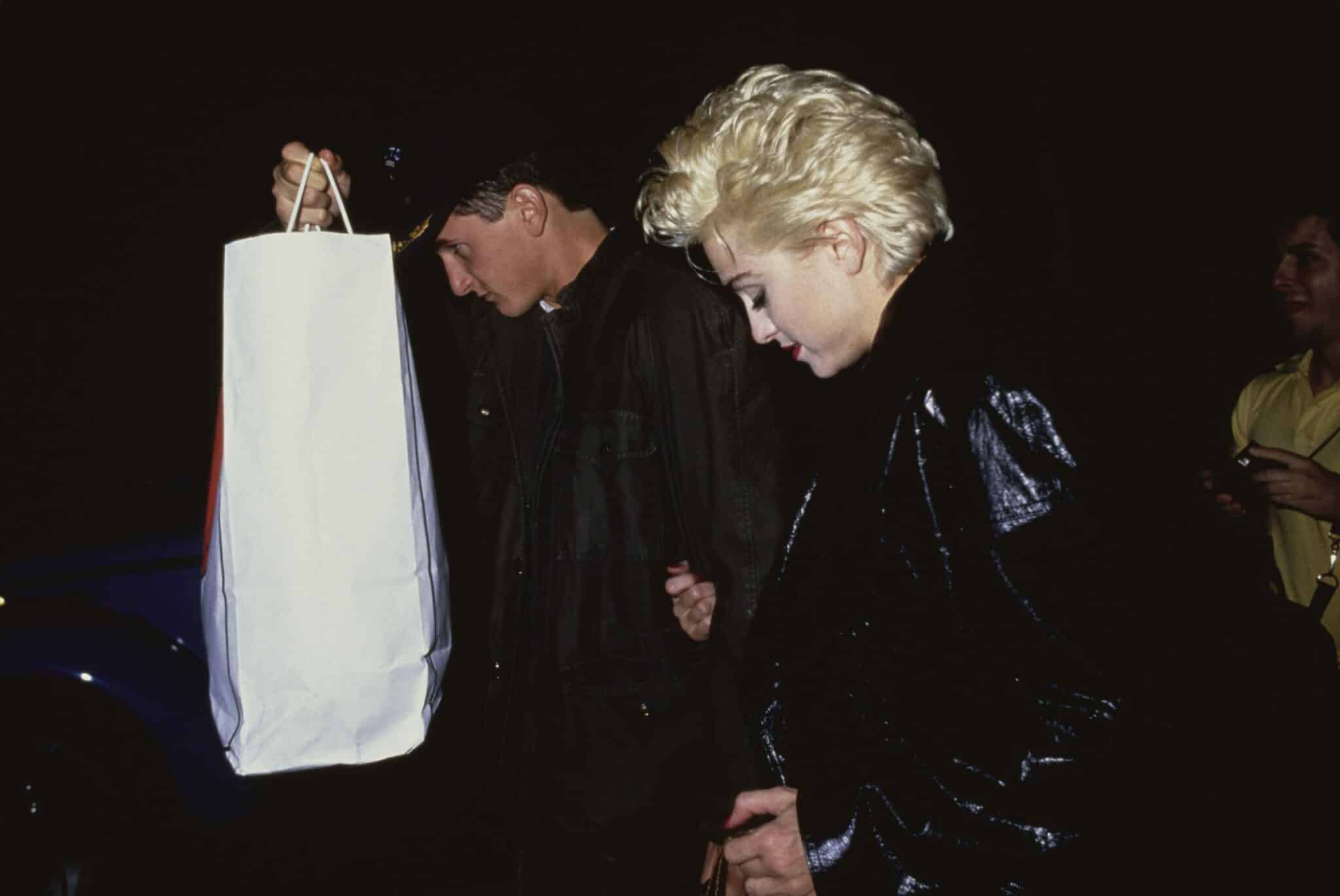 An even more explosive claim about the couple arose at the end of 1988 – one that finally marked the end of their troubled marriage. Penn has confirmed that on the night of December 28, 1988, Madonna called the Los Angeles County Sheriff’s Department to their shared home on Carbon Mesa Road following a fight. What exactly transpired during that fight remains a mystery.

The People was the first to report on the incident, claiming: “Sexy pop star Madonna spent New Year’s Eve trussed up like a turkey after being cruelly battered by her drunken, bully-boy husband Sean Penn. The terrified singer was beaten, gagged, strapped to an armchair with flex and left for nine hours.”

The same article reported that Madonna was untied by household staff, and when police arrived, they wrote it off as a minor domestic tiff. The New Yorker later reported that Penn was not arrested after this incident.

In Madonna Revealed: The Unauthorized Biography, author Douglas Thompson elaborated: “It was just after 4:00 P.M. on December 28 when Penn broke into his own home. Madonna had allowed all the help time off for the holidays. Penn put Madonna through hours of terror. He hit her, he tied her up, and he humiliated her. He also sexually assaulted her.” 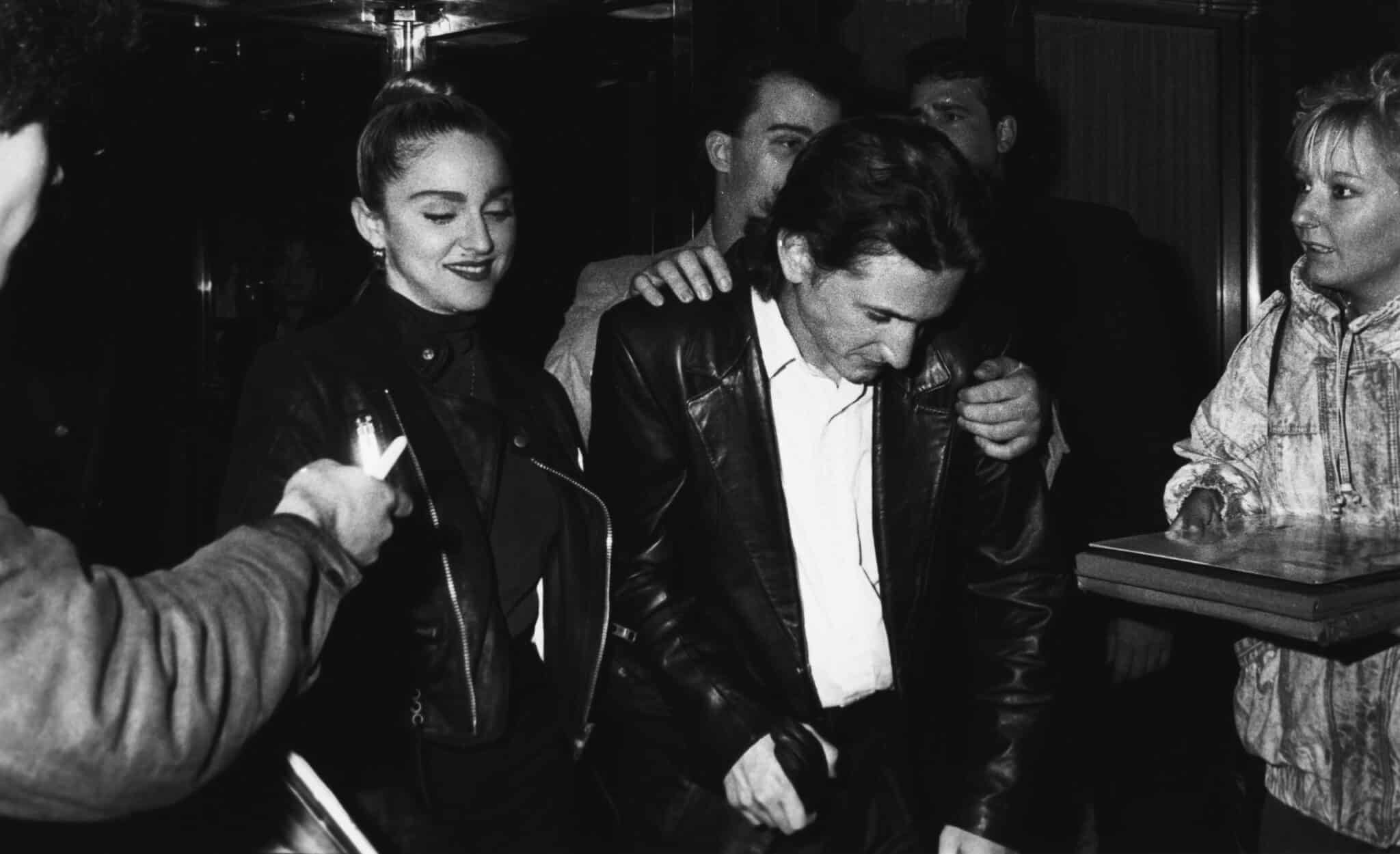 Thompson interviewed Lieutenant Bill McSweeney, who attended the scene that night. He said that Madonna escaped from the house first, and fled to the police station. “When Madonna staggered into the station, she was distraught, crying, with makeup smeared all over her face,” McSweeney said.

“I hardly recognized her as Madonna, the singer. She was weeping, her lip was bleeding and she was all marked up. She had obviously been struck. This was a woman in big trouble, no doubt about it…It was all over by the time we got there. The act had been completed”.

Penn has made light of the allegations. In a 1991 interview with Playboy Magazine, he addressed the claim that he “dressed her up like a turkey”: “After I read that stuff, I thought long and hard about what one would do to dress someone up like a turkey. And I nailed it. I figured you’ve got to get out the Playtex glove, blow it up and put the glove over the head.” 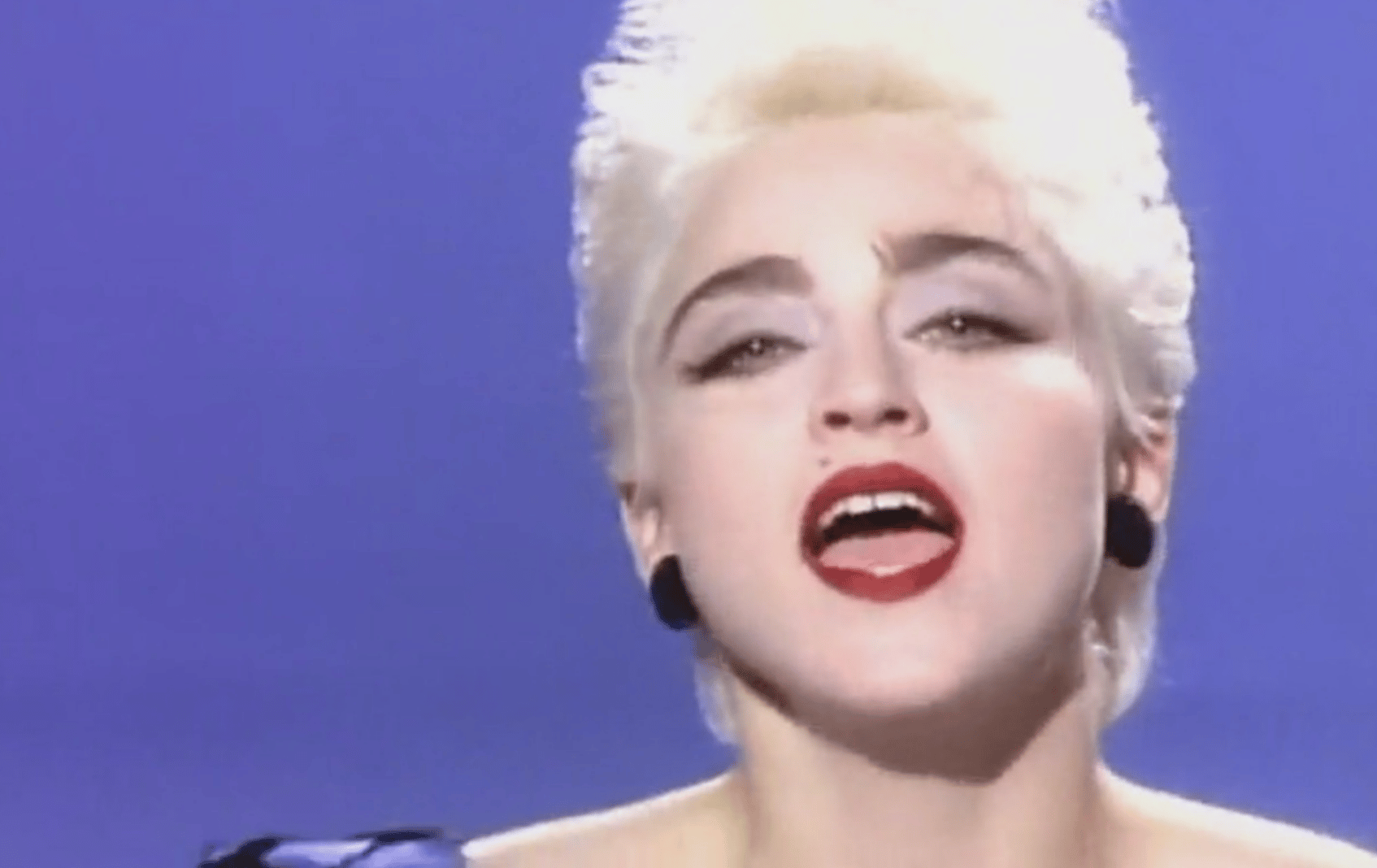 When pushed, Penn refused to deny the incident. Instead, he told the interviewer to ask Madonna herself to verify that the reports were false.

Madonna filed for divorce in January 1989, and around the same time asked to drop the assault charges against Penn. Deputy district attorney Al Albergate was reported as saying: “Madonna asked that there be no criminal charges pressed. There is no other evidence with which to base a criminal charge so there won’t be a criminal charge filed.”

When she was later questioned about the December 1988 incident by Rolling Stone, Madonna said that reports of her being tied up were “extremely inaccurate, as they usually are. They made it all up.” The interviewer then asked Madonna why she filed and dropped charges with the police. Madonna did not respond to the question. 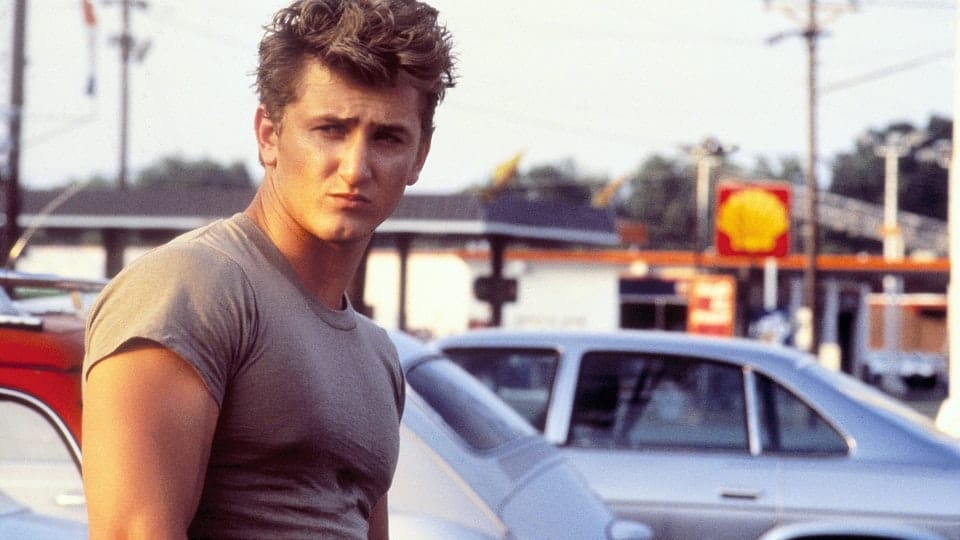 “I understand your position,” she said. “People want to hear the dirt. But this is not really anything I want to talk about here. It’s totally unfair to Sean, too. I have great respect for him.”

Penn went on to date and marry actress Robin Wright, with their marriage ending in 2010. After dating Charlize Theron, Penn married Australian actress Leila George, but they divorced in April 2022. Madonna later wedded Guy Ritchie but divorced him in 2008.

In 2015, the claims of past domestic abuse by Penn resurfaced. In an interview with Rolling Stone, Empire star Terrence Howard admitted that he had previously struck his wife in front of their children, which sparked a fresh debate about domestic abuse by celebrities.

Empire co-creator Lee Daniels commented on the news: “[Howard] ain’t done nothing different than Marlon Brando or Sean Penn, and all of a sudden he’s some f***ing demon. That’s a sign of the time, of race, of where we are right now in America.” 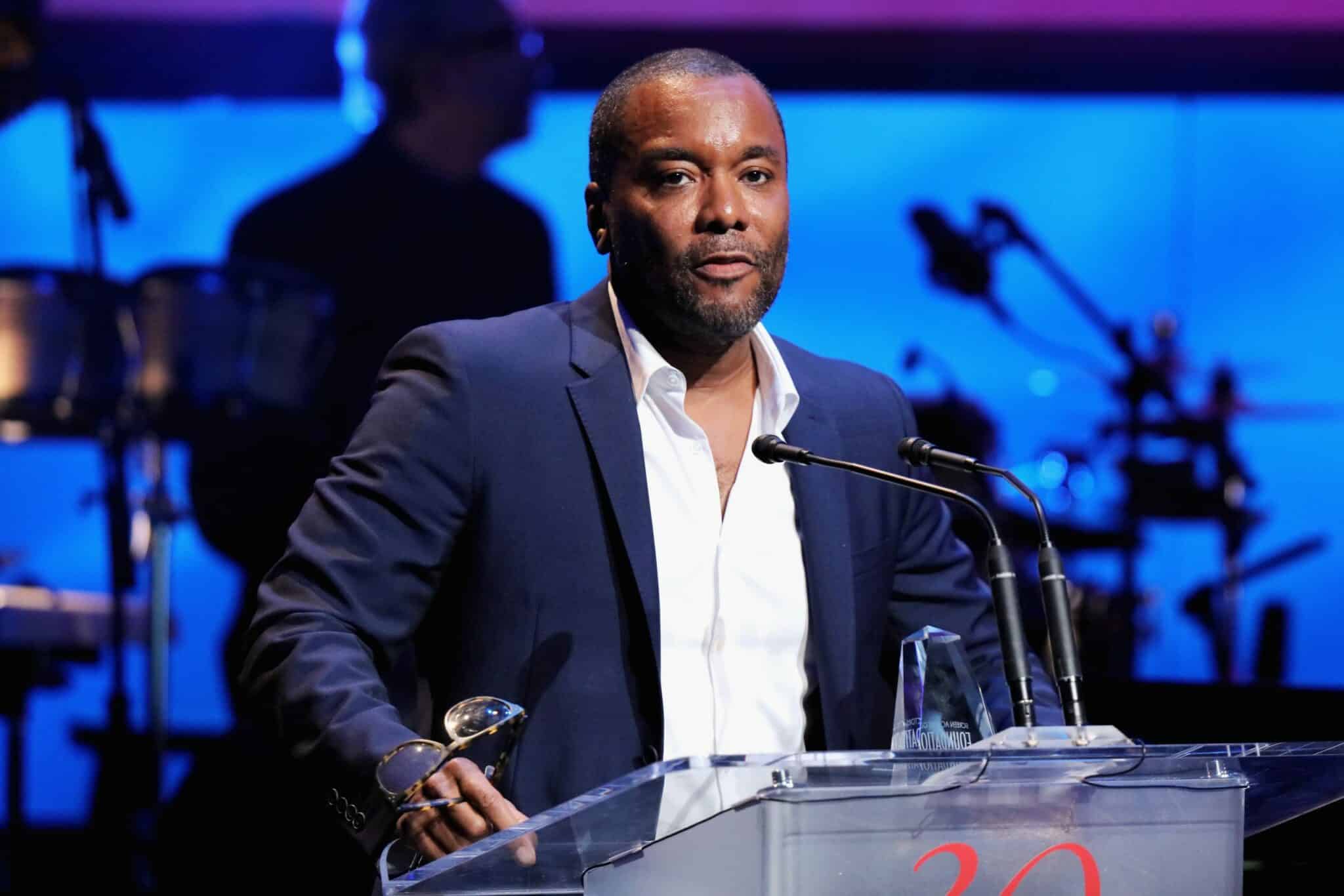 Penn promptly launched a lawsuit against Daniels for the comment, with his legal team stating: “Daniels falsely equates Penn with Howard, even though, while he has certainly had several brushes with the law, Penn (unlike Howard) has never been arrested, much less convicted, for domestic violence, as his ex-wives (including Madonna) would confirm and attest.”

Madonna stepped in to say that Penn never hit her during their relationship, and at long last, she addressed the claims about being tied up. “I am… aware of allegations concerning an incident that occurred in [sic] December 1989, which purportedly resulted in Sean’s arrest for domestic assault and battery against me,” she wrote in a sworn affidavit. “I know those allegations to be false.”

“While we certainly had more than one heated argument during our marriage, Sean has never struck me, ‘tied me up’ or physically assaulted me, and any report to the contrary is completely outrageous, malicious, reckless and false,” she said. 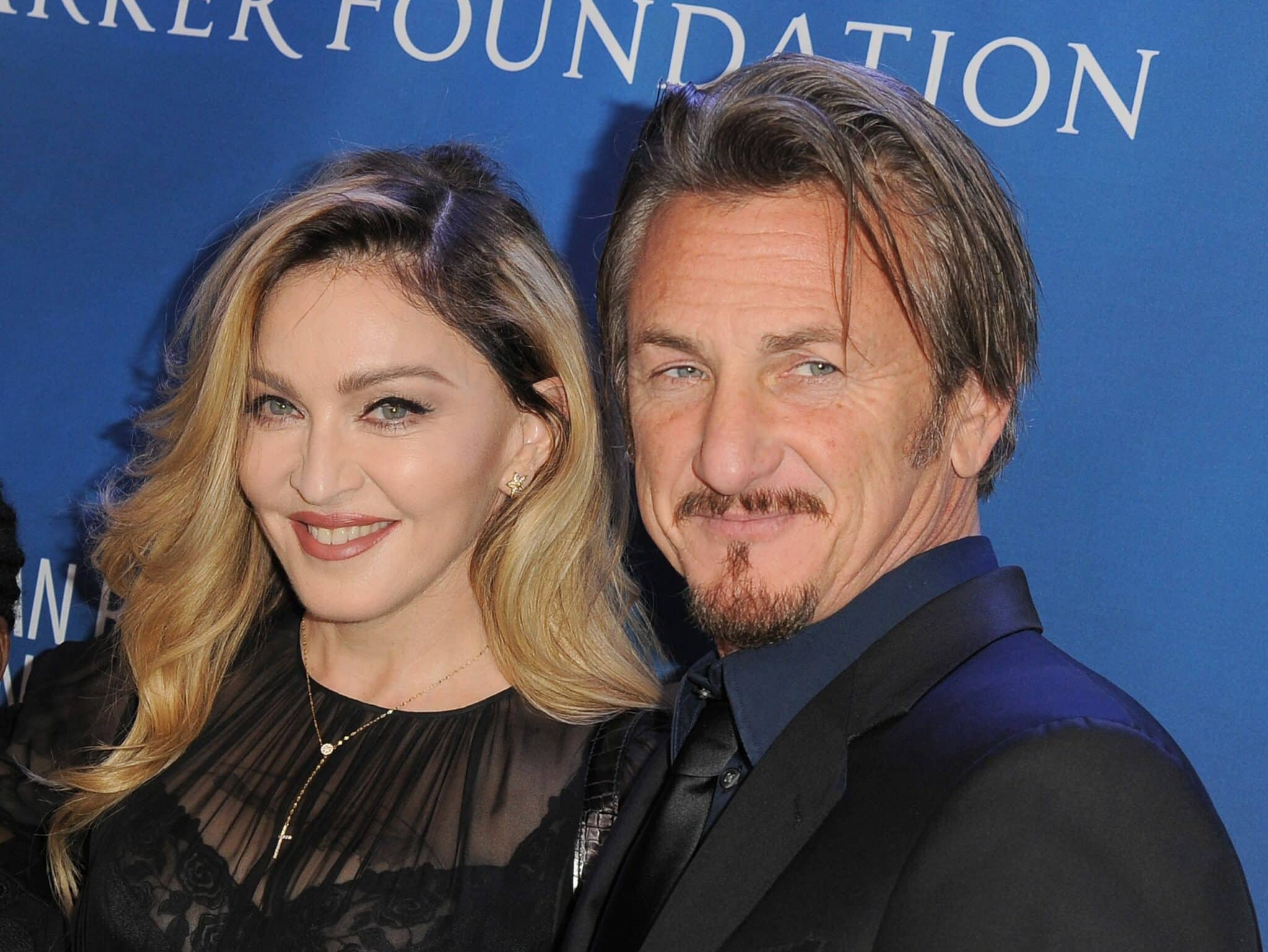 Penn dropped the $10 million lawsuit after Daniels apologised and called Penn a “brilliant actor” and “humanitarian”. Madonna, meanwhile, has continued to provide a mixed picture of her past relationship with Penn.

According to the Daily Mail, Madonna described Penn as a “c***” and an “a**hole” during her Rebel Heart Tour shows in 2016. However, in recent years the pair have reconnected and have worked together for charity fundraising events.

In a bizarre on-stage gag in December 2016, Madonna was speaking at an auction fundraiser for her charity Raising Malawi with Penn in attendance, when she told him: “I’m still in love with you.”

Madonna then jokingly proposed to Penn, and persuaded him to bid for her hand in marriage. Penn joined in and bid $150,000, eventually climbing on-stage, climbing between the singer’s legs and putting her in handcuffs. “For once, he’s not the one being arrested,” Madonna quipped.