Rock’n’Roll All Night With These 10 Facts About Kiss

Arguably no other band in the history of rock’n’roll has such a distinctive look as Kiss. Since their emergence in the early 70s, the New York rock band has captured the imagination of audiences everywhere with their distinctive black and white make-up, outlandish costumes, giant platform boots, on-stage pyrotechnics and of course the music.

Love them or hate them, you can’t deny Kiss are a tenacious bunch who’ve kept on filling arenas for close to 50 years now. Here are a few things about the larger-than-life rockers that you might not have known.

10. They have to use a different logo in some countries because the standard Kiss logo resembles the SS insignia

From early on in Kiss’ career, the band’s iconic logo has been the subject of some controversy, as the double-S closely resembles the insignia of the SS, the infamous Nazi paramilitary unit. The band have always insisted this was entirely unintentional: founder members Gene Simmons and Paul Stanley (the latter of whom designed the logo) are both of Jewish descent.

Even so, Kiss have been forced to ditch their standard logo in certain countries where Nazi imagery is outlawed, including Germany, Austria and Israel: in these territories they use a more square-edged modification of their emblem.

9. The band has had ten official members over the years 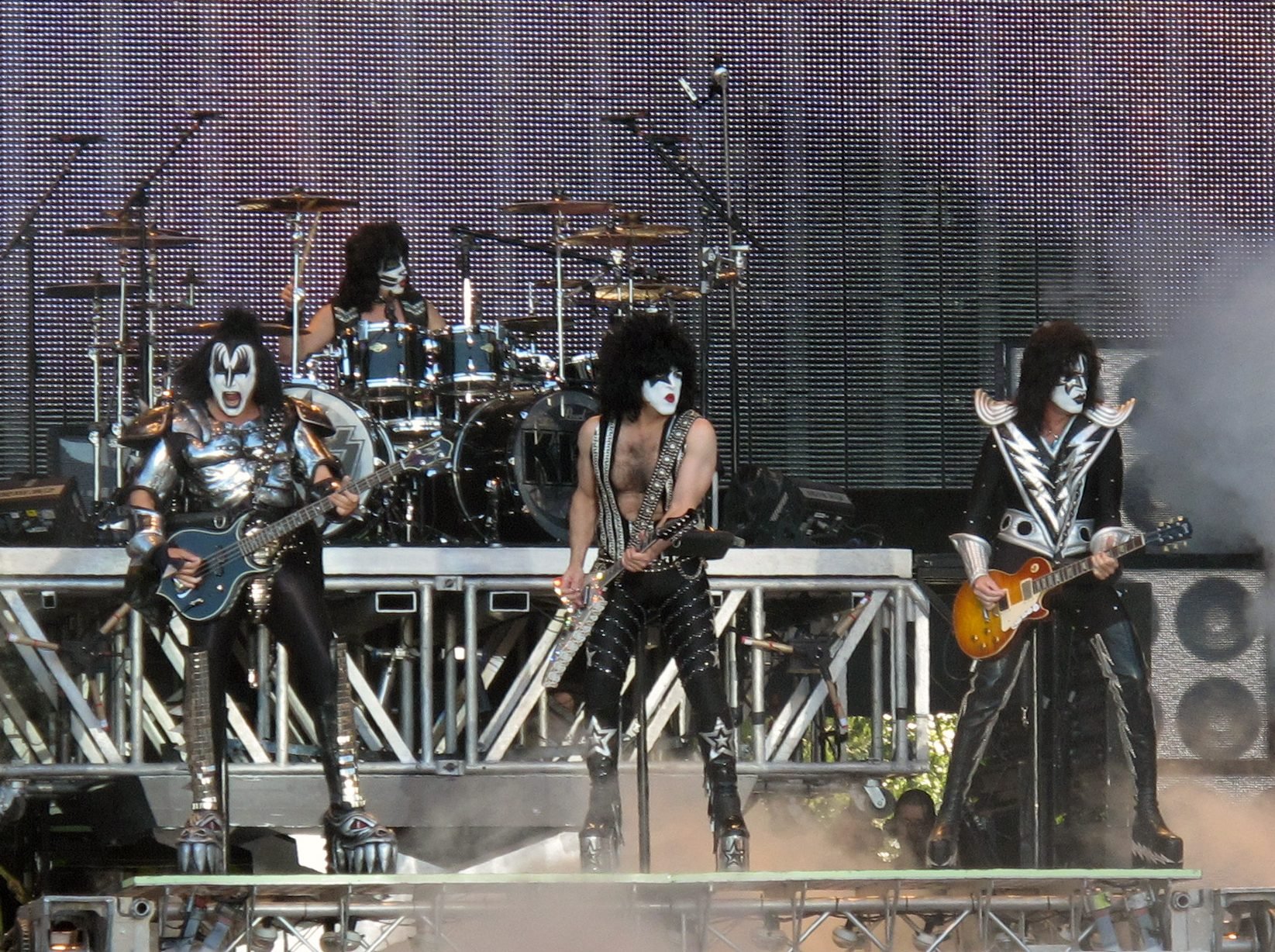 Guitarist/vocalist Paul Stanley and bassist/vocalist Gene Simmons are the only members of Kiss to have remained in the band from the beginning, all the way through to the present day. The classic line-up formed in 1973 included lead guitarist Ace Frehley and drummer Peter Kriss, but Kriss was fired in 1980 and replaced with Eric Carr.

When Frehley was also fired, the band briefly recruited Vinnie Vincent on lead guitar followed by Mark St. John, before Bruce Kulick became the band’s long-time lead guitarist. Eric Carr died in 1991, at which point Eric Singer took over on drums. The original line-up reformed for a few years in the mid-90s, then in 2002 Singer rejoined on drums and Tommy Thayer joined on guitar, and that’s the Kiss line-up that remains to this day. 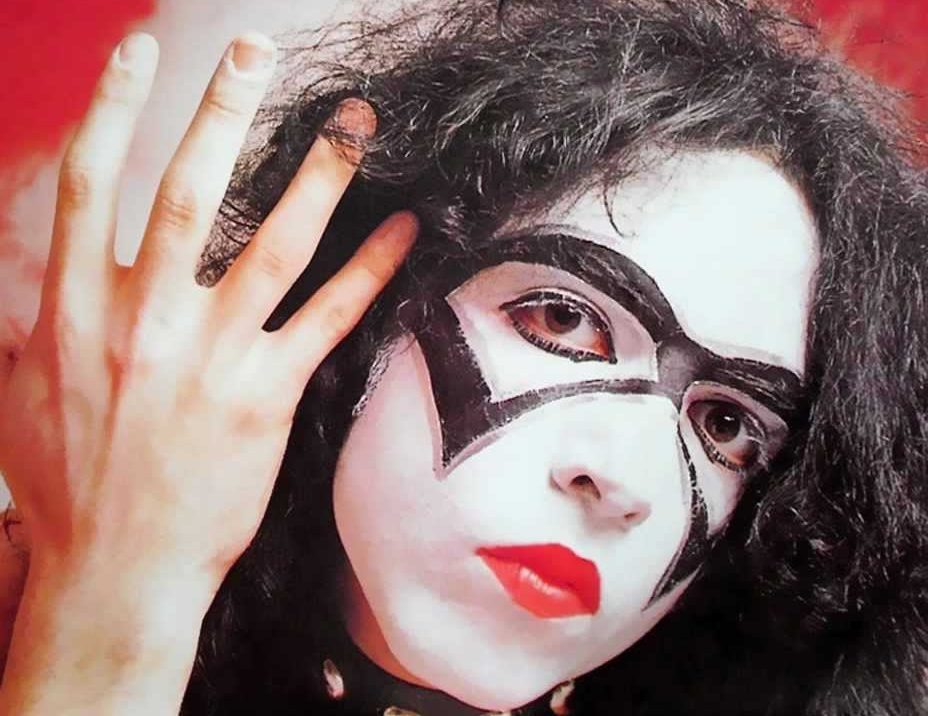 Kiss have always been famous for their make-up, with all four members having always donned white face paint and a distinctive black pattern, giving each band member a unique persona. Singer and guitarist Paul Stanley was dubbed the Starchild, due to his signature star over his right eye. While this look has become iconic, in the band’s early days Stanley briefly tried out an alternative make-up.

This alternative make-up was dubbed the Bandit, as it resembled a bandit mask. This was at the suggestion of a record label boss, who pointed out that Stanley’s make-up was the only design that wasn’t symmetrical.

7. Gene Simmons is a lifelong teetotaller (but he’s recently invested in cannabis) 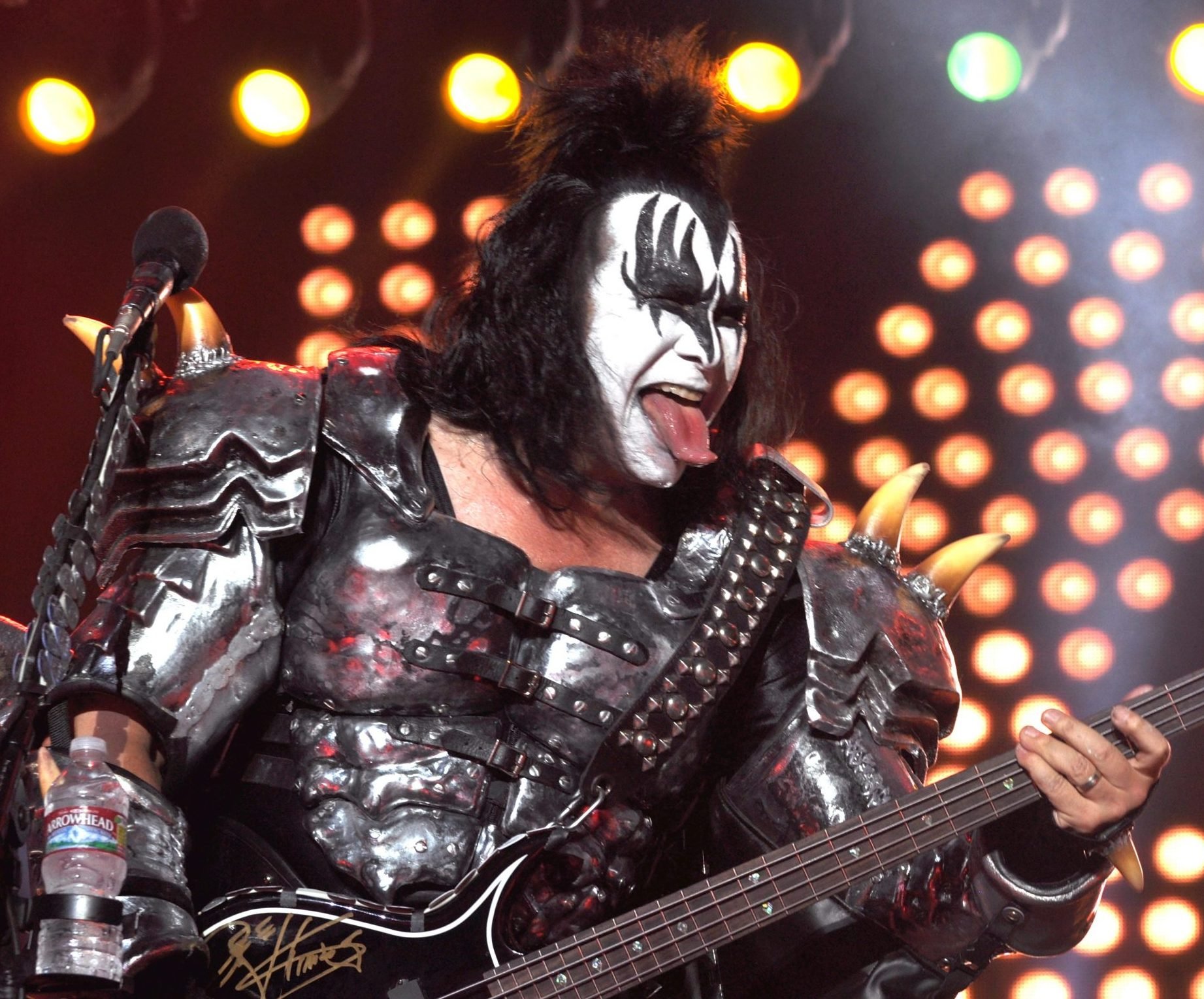 Kiss are renowned for their hard-partying wild men of rock image, but bassist Gene Simmons departs from this stereotype in one notable respect: he doesn’t drink alcohol or take drugs, and he never has. Never shy to speak his mind, Simmons has spoken out against drugs and alcohol most of his career.

However, in more recent years Simmons has worked closely with Canadian cannabis company Invictus. He is a major shareholder in the company, and for a time worked as their ‘chief evangelist officer.’

6. Their 1978 movie Kiss Meets the Phantom of the Park was so bad, the band refused to discuss it for years

Like the Beatles before them and the Spice Girls years later, Kiss decided to try their hand at making a movie at the height of their fame. The result was 1978’s made-for-TV production Kiss Meets the Phantom of the Park, which was quickly declared a laughable failure even by die-hard fans. Reportedly employees of Kiss were forbidden to ever mention the film in front of the band members.

Although it’s a live-action film, Kiss Meets the Phantom of the Park was produced by legendary animation company Hanna-Barbera. The band would later work with Hanna-Barbera again on 2015’s straight-to-DVD animated feature Scooby Doo and Kiss: Rock and Roll Mystery. 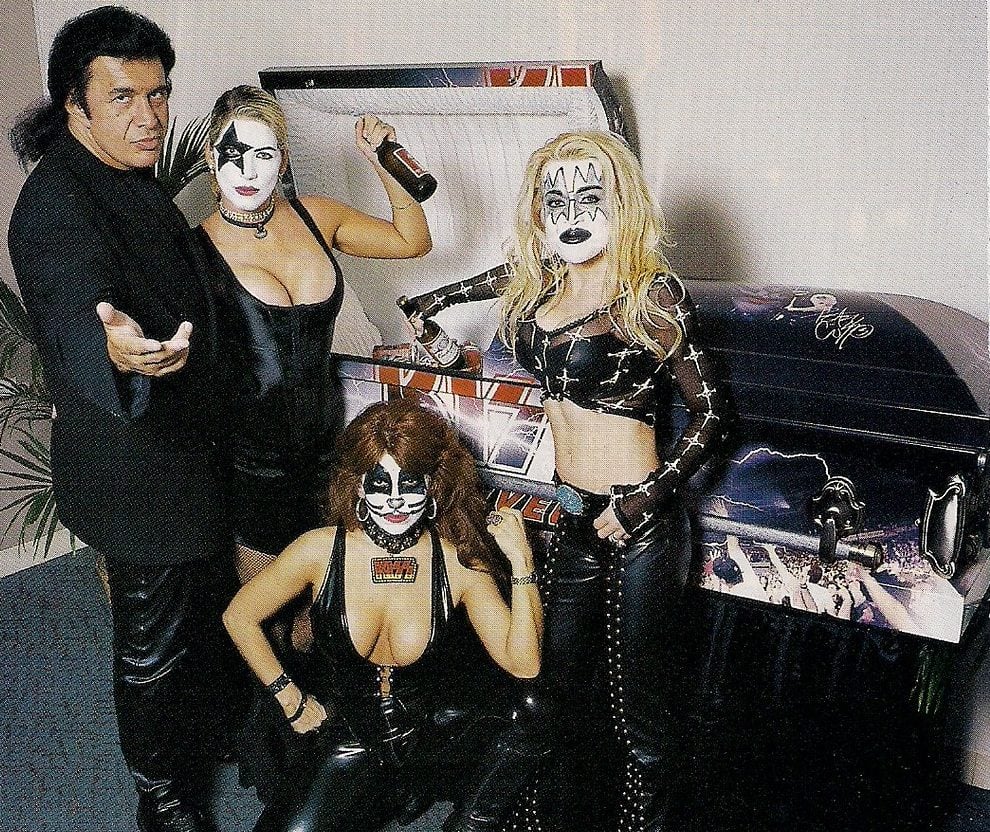 The recognisability of the Kiss brand has seen the rockers lend their logo and likeness to all manner of memorabilia, from the predictable T-shirts, posters, action figures and lunch boxes, to the somewhat stranger, such as ‘Kiss Kaskets.’

Yes, mega-fans of the rock superstars can be laid to rest in an officially licenced coffin bearing the band’s image (urns are also available). Notable figures who have been buried in Kiss Kaskets include Dimebag Darrell and Vinnie Paul of metal band Pantera. 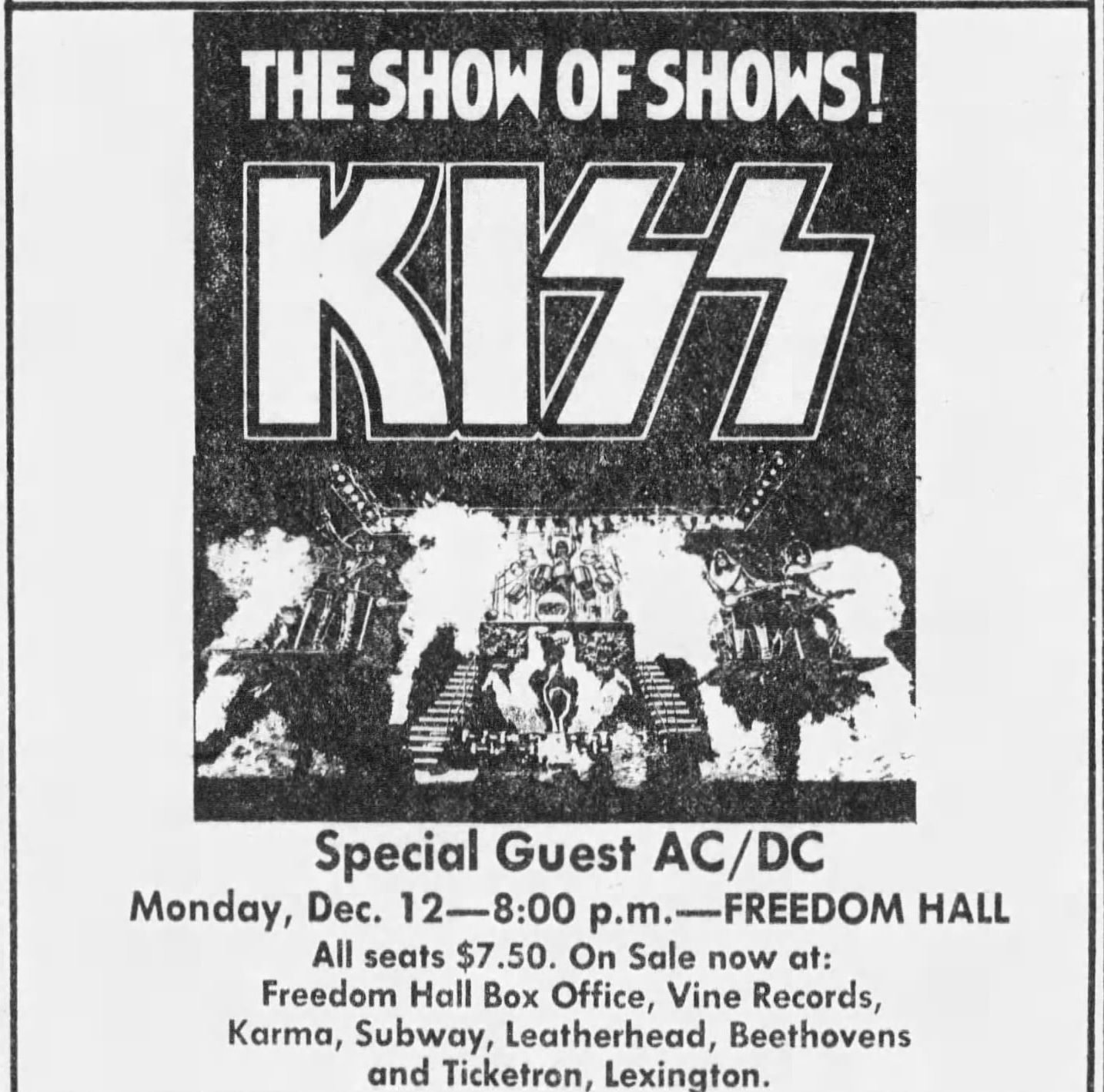 As well as being one of the most popular rock acts of the 70s, Kiss used their platform (and we don’t just mean their boots) to help launch the careers of a number of other bands who went on to huge success. Their opening acts on their 70s tours included the then-little known AC/DC, Rush and Judas Priest, all of whom went on to be millions-selling, arena-filling acts in their own right.

In addition, Gene Simmons was an early champion of Van Halen. The Kiss bassist tried and failed to get them a record deal in the mid-70s, but they wound up doing alright for themselves afterwards (even if their legendary guitarist Eddie Van Halen once asked Simmons to let him join Kiss as Ace Frehley’s replacement).

3. They ditched their signature make-up in the hopes of staying relevant in the 80s

After dominating the 70s, Kiss were starting to fall behind a bit by the early 80s, as a new wave of big hair rock bands stole their spotlight. Anxious to keep up with the times, the band made the shock move of taking off their make-up and costumes in 1983. It’s not a period that Kiss look back on with much pride: Paul Stanley reflects, “We lost the hunger, lost the passion… We became more concerned with trying to get the approval of our peers as opposed to maintaining our connection to the fans.”

Kiss brought back their classic look in 1995 when Ace Frehley and Peter Criss re-joined, and they’ve kept on the make-up, the costumes and the platform boots ever since. 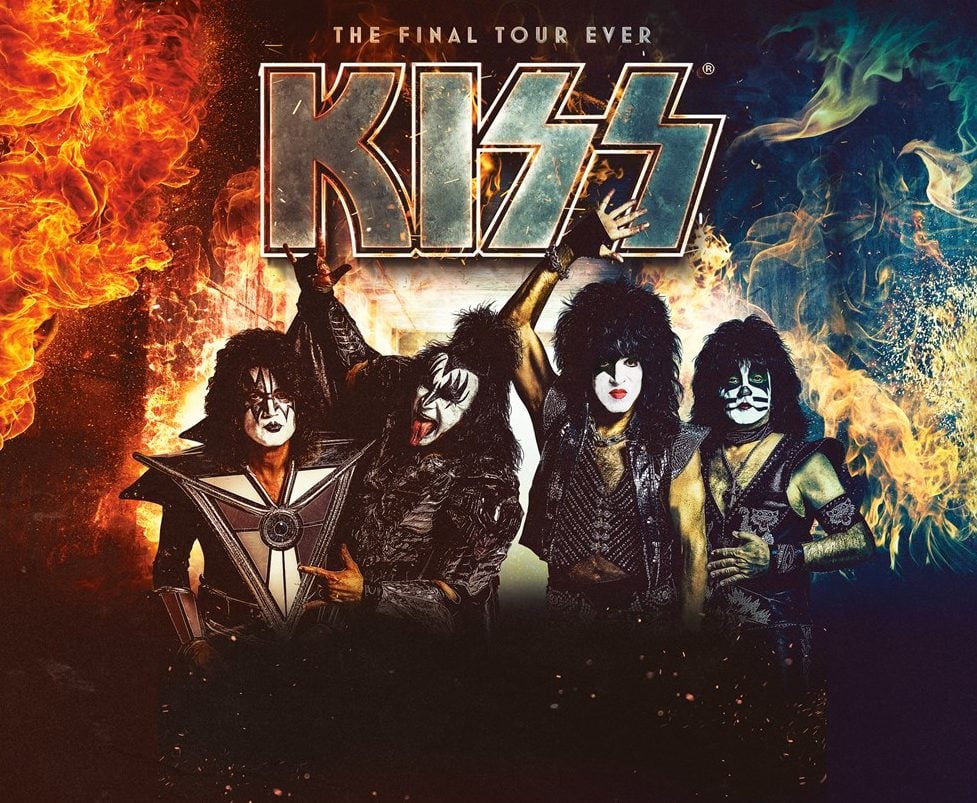 In 2018, after 45 years in the business, Kiss announced that their next tour would be their last. The band kicked off the End of the Road World Tour in January 2019, and had performed 120 of their planned shows before they were forced to put the tour on hold due to the Covid-19 pandemic.

The tour is poised to re-commence in June 2021 with more than 50 shows lined up across Europe, the US, Latin America and Australia, concluding with a show at the UK’s Download Festival in June 2022.

1. Netflix is set to make a biopic about the band

It was recently announced that Netflix are poised to produce a rock biopic on Kiss, with Joachim Rønning (Pirates of the Caribbean: Dead Men Tell No Tales) in the director’s chair. Stanley and Simmons are said to be closely involved in the project, which will primarily focus on their relationship.

Set to be entitled Shout It Out Loud, the film follows in the wake of such recent rock movies as Queen biopic Bohemian Rhapsody, Elton John biopic Rocketman, and Mötley Crüe biopic The Dirt.