In 1986, The Challenger Shuttle Blew Up Live On Television

A mission intended to inspire children and show the world that space travel could be anyone’s dream, the Space Shuttle Challenger held great promise at its launch on January 28, 1986. But that hope shattered only 73 seconds after launch, in a personal and national tragedy that saw NASA subsequently ground its fleet for three years. Now, more than three decades later, we’re taking a closer look at this Space Age disaster.

‘I saw the Space Age being born’ 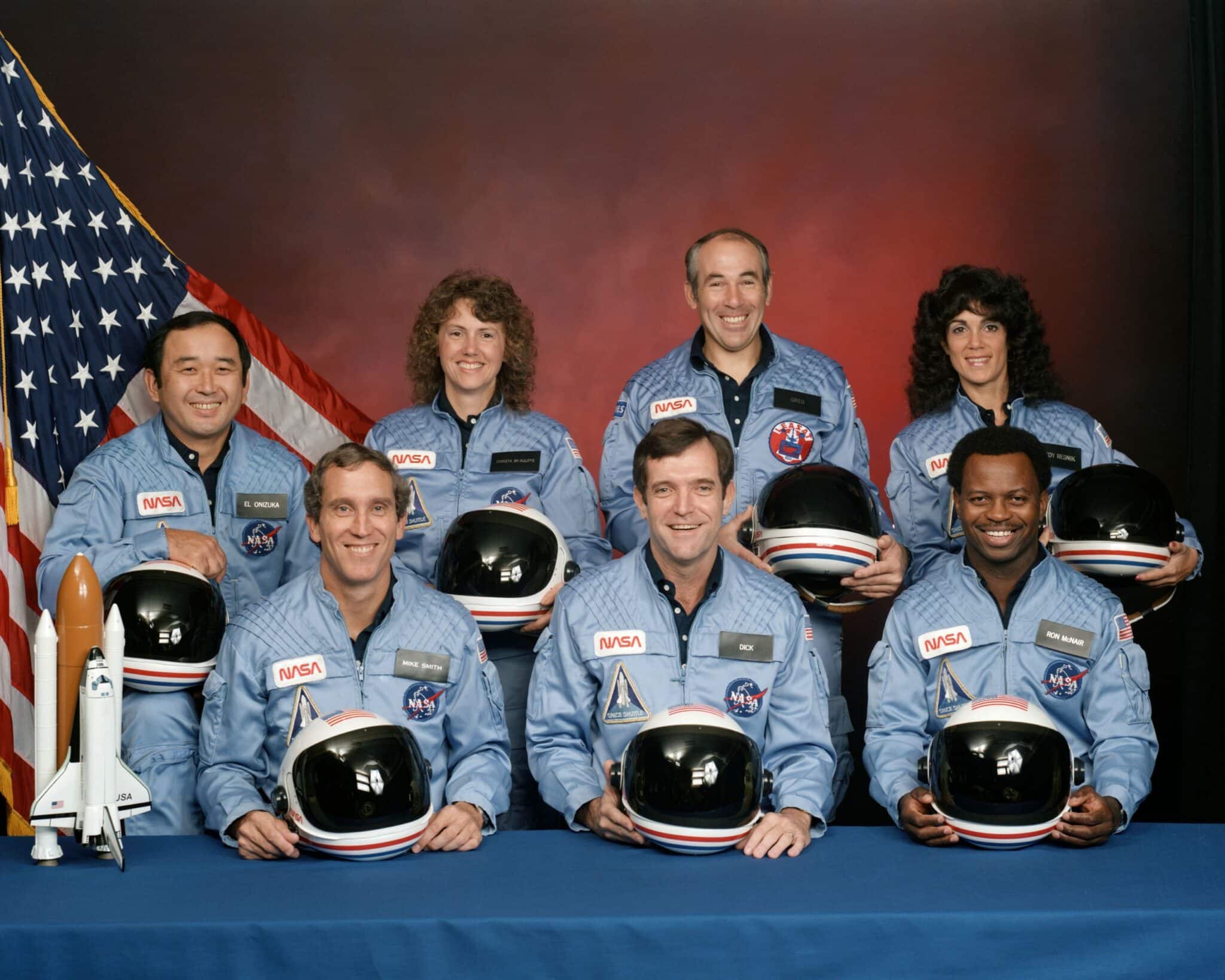 By 1986 the Challenger was a seasoned Space Shuttle, with its tenth voyage planned for early that year. This trip had several goals: scientists hoped to deploy a Tracking and Data Satellite and study Haley’s Comet, as well as retrieve the satellite SPARTAN.

Francis R Scobee was selected as the mission commander. He was accompanied by pilot Michael J Smith and mission specialists Ellison S Onizuka, Judith A Resnik and Ronald E McNair. Gregory Jarvis, who was an engineer and payload specialist for Hughes Aircraft, also joined the team. 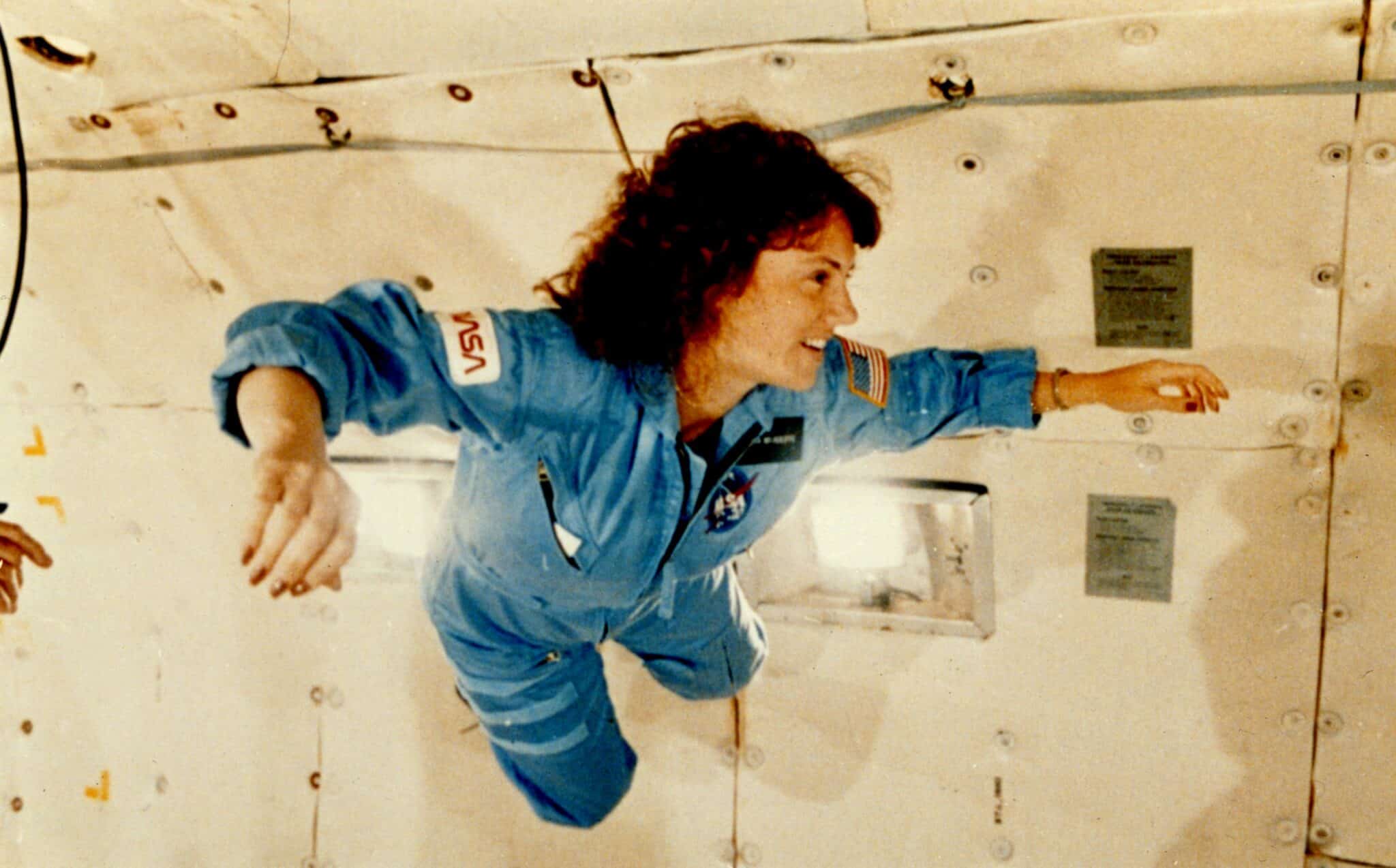 To the general public, this mission was particularly special because of the crew’s seventh passenger. Christa McAuliffe was a social studies schoolteacher, hired by NASA to broadcast live science classes from space.

President Ronald Reagan and NASA had long hoped to send a civilian into space, to encourage public interest in space exploration and inspire the next generation. Among many ideas, NASA even considered sending Caroll Spinney, the puppeteer who played Big Bird, on the Challenger mission.

It was the 37-year-old McAuliffe, though, who was eventually picked out of 11,500 civilian applicants. A teacher at Concord High School in New Hampshire, she wrote in her application: “I watched the Space Age being born and I would like to participate.” She was a married mother-of-two, and her pupils and colleagues alike were thrilled to see her team up with NASA.

‘There wasn’t a cloud in the sky’ 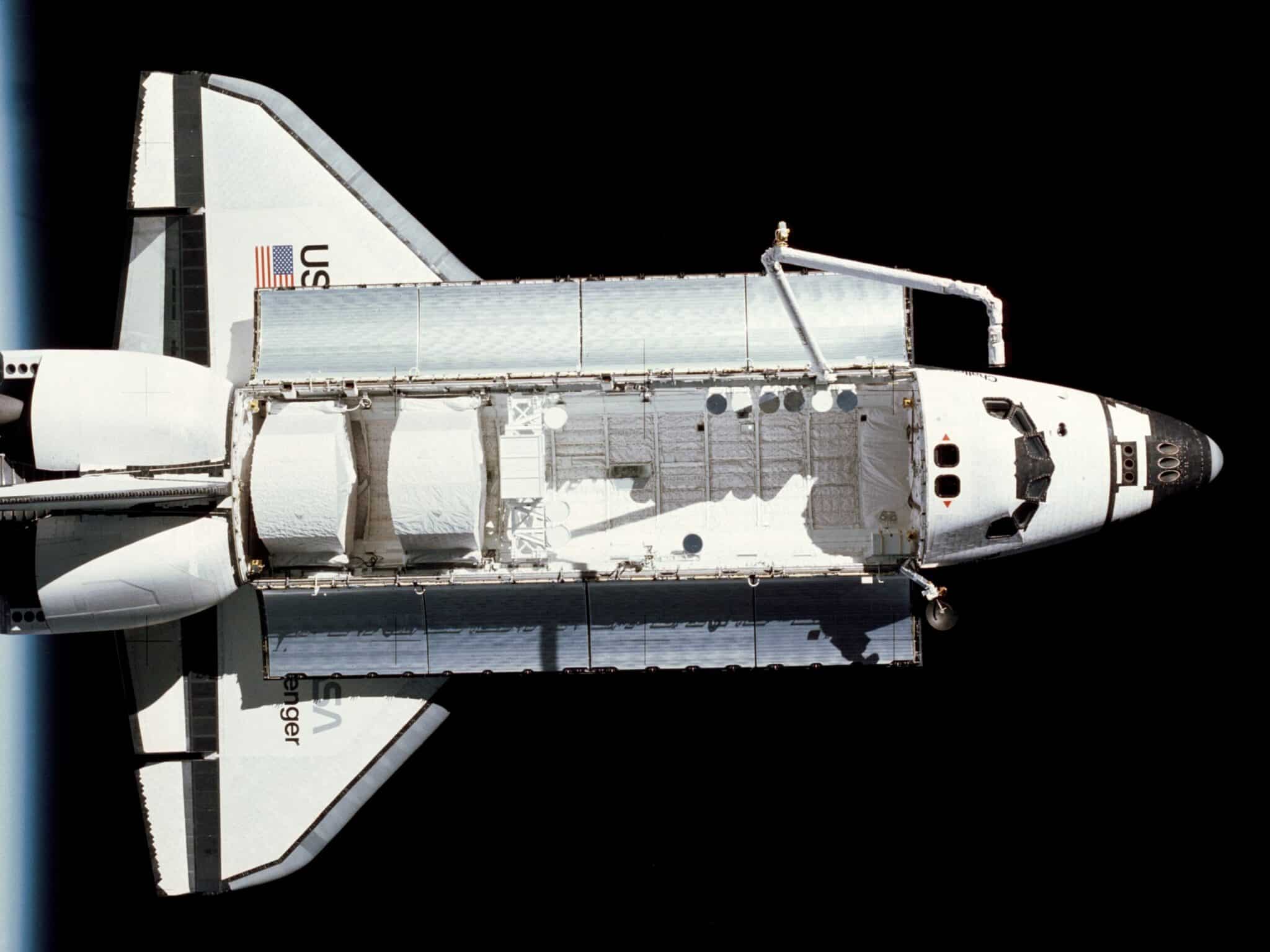 The night before the launch was a sleepless one, particularly for two staff. Roger Boisjoly and Bob Ebeling, who were both engineers working for NASA contractor Morton Thiokol, had voiced their concerns about the Challenger along with three other colleagues.

They believed the shuttle’s booster rockets wouldn’t seal correctly under extremely cold temperatures, as would prove to be the case that frosty January morning. The night before the launch, Ebeling told his wife, “It’s going to blow up.”

Boisjoly expressed his concerns about cold weather six months in advance, noting in a Morton Thiokol memo: “The result could be a catastrophe of the highest order, loss of human life.” However, their warnings went unheeded as NASA pushed ahead with its original launch schedule. 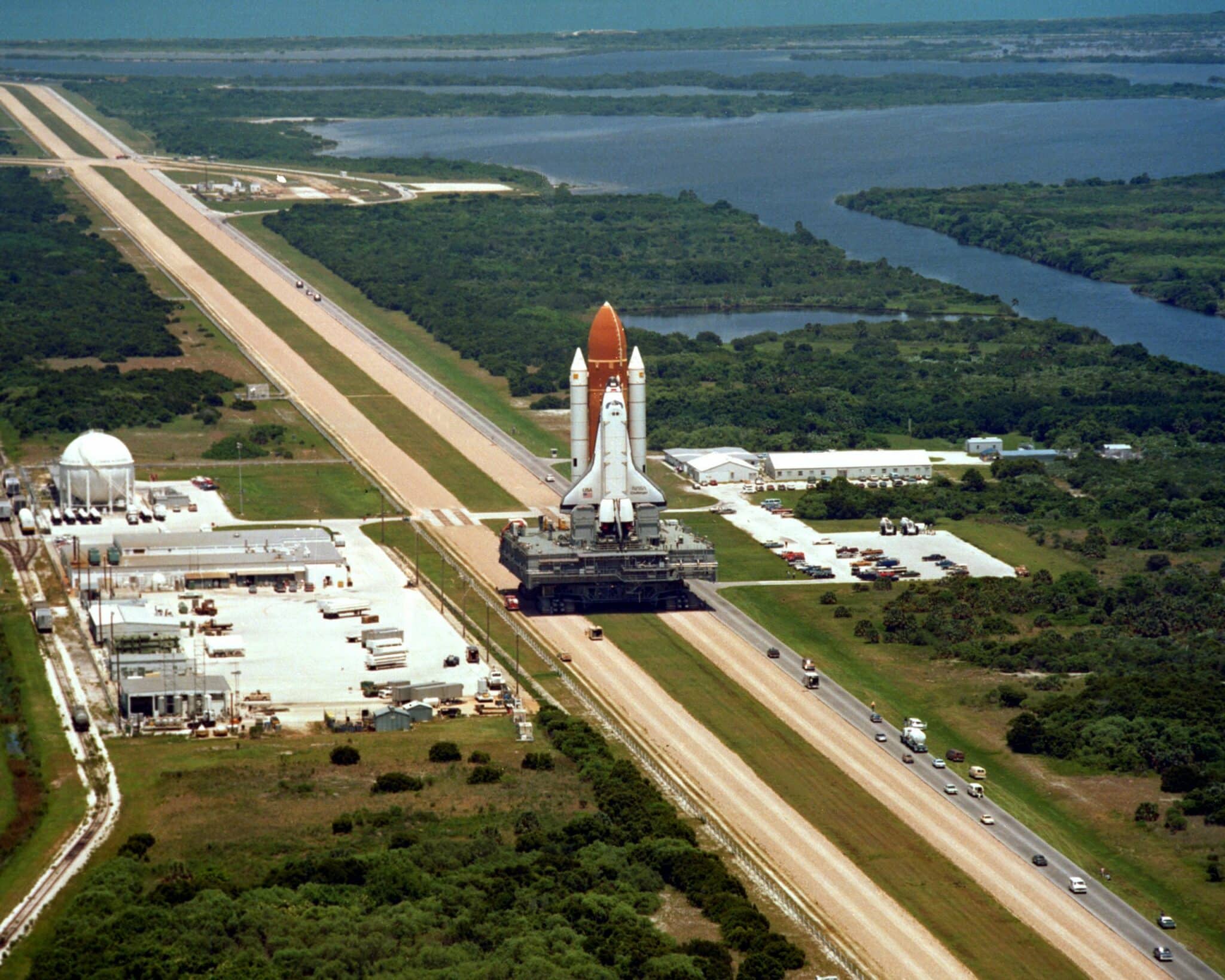 CNN showed the launch that morning, and NASA created a satellite broadcast to school televisions so that children could watch the momentous scene live. Among them were McAuliffe’s pupils, who gathered in the Concord High School auditorium to cheer on their teacher.

Watching the Challenger launch in person were NASA staff, the astronauts’ families, journalists and a third-grade class, seated on a grandstand. June Scobee Rodgers, wife of Dick Scobee, later recalled watching from the Launch Control Center: “We had been watching the television in a room inside the building during the countdown, and we went up on top for the actual launch.”

“There wasn’t a cloud in the sky,” CNN correspondent John Zarella recalled. “You could cut that sky with a knife. It almost looked like the sky was frozen. At eleven o’clock, everybody went down from the press mound over this grassy field, out to where the countdown clock was.” 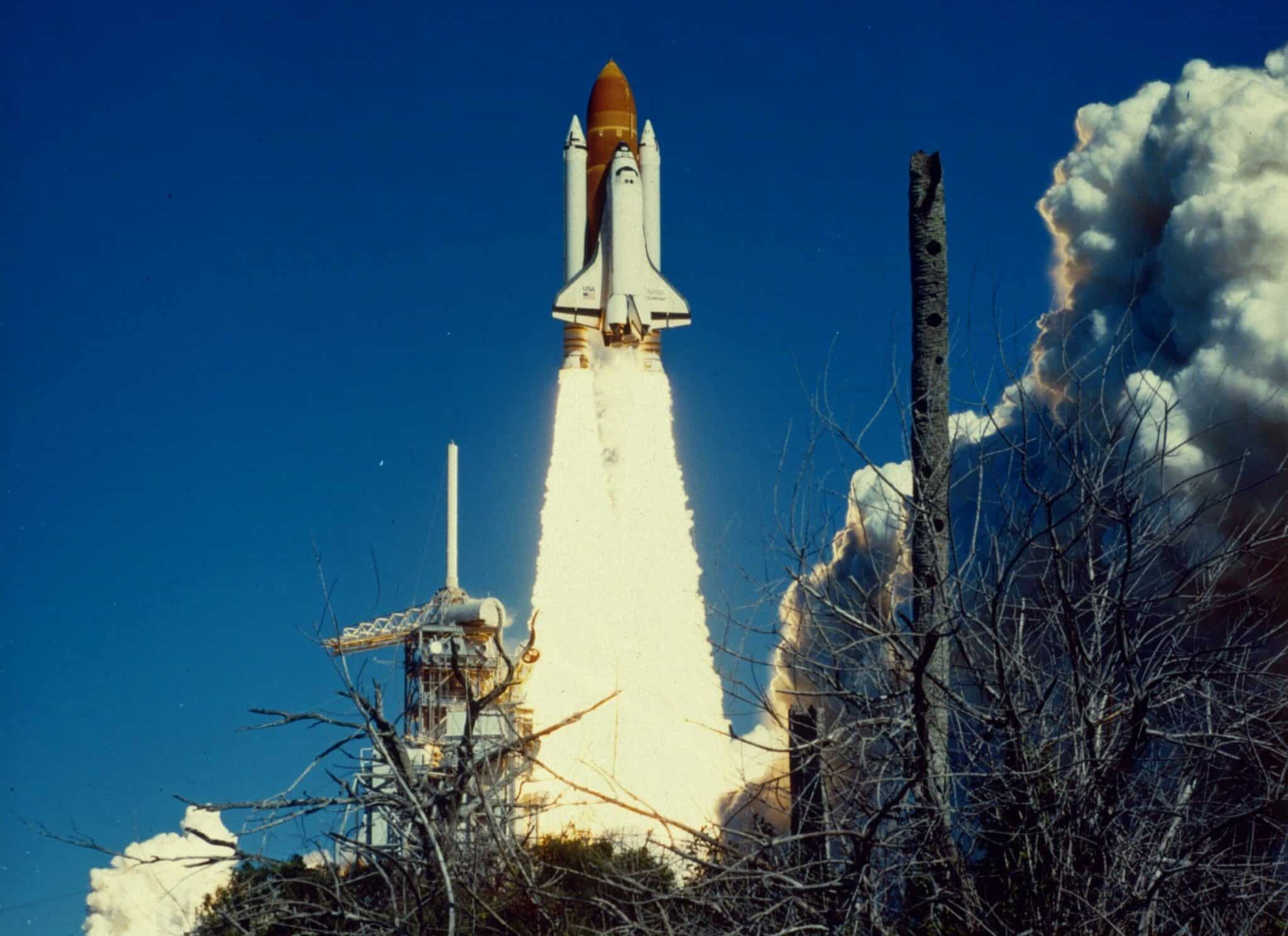 “We felt the blast from the launch hit us in the chest,” reporter Kathy Sawyer has recalled. At 11:38 a.m. EST, the Challenger took off to jubilant cheers and tears of joy.

But only 73 seconds later, as the Challenger reached 46,000 feet, a seal in the craft’s right-side solid rocket booster caused a hot gas leak. As Boisjoly and Ebeling had warned, the ground temperature of −3 °C had compromised the rubber O-ring seals. As liquid oxygen and hydrogen flooded out, they engulfed the Challenger in a fireball. 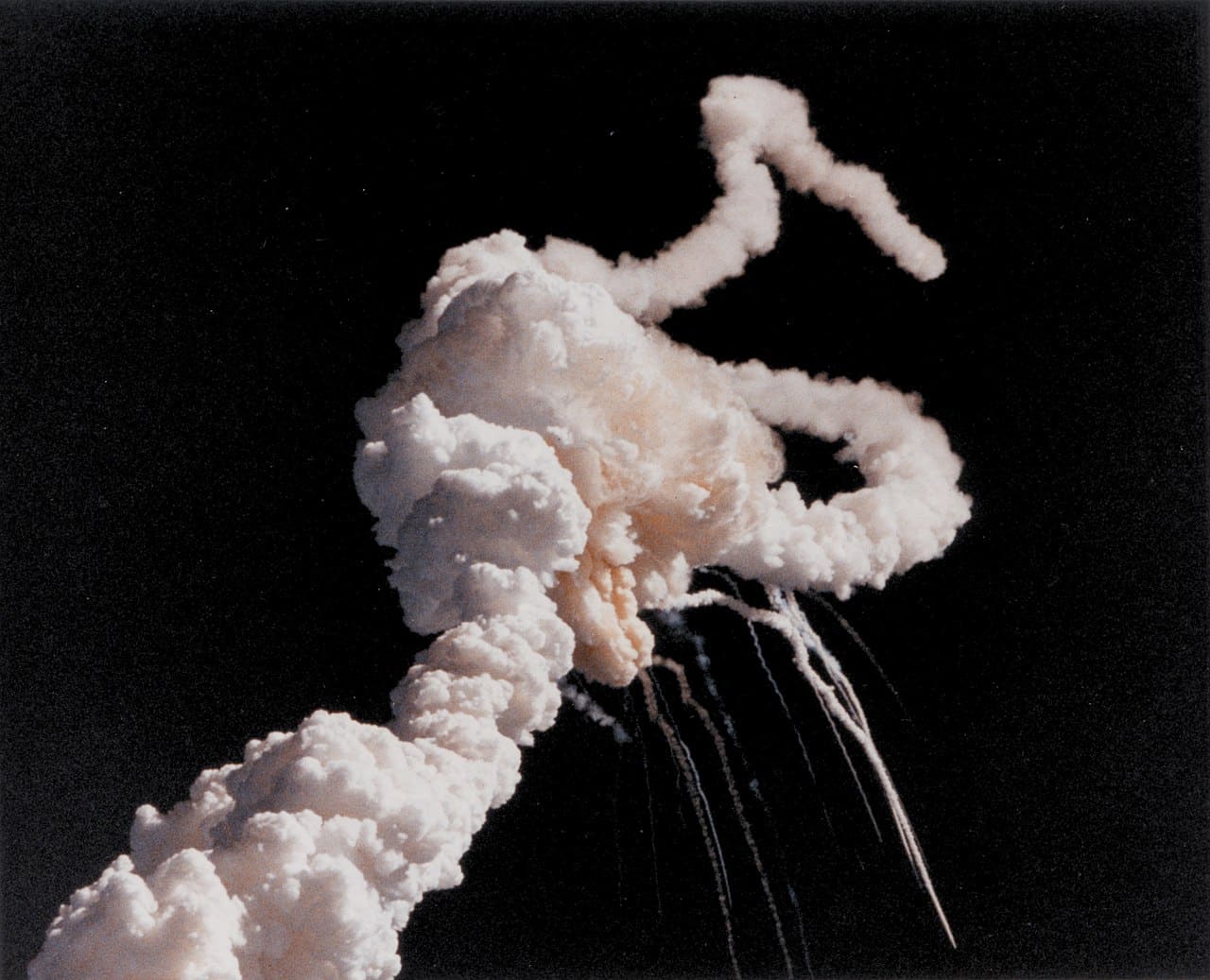 Back in the classrooms, schoolteachers hushed their pupils, many of whom were still cheering – unaware that anything had gone wrong. From the footage, it was at first unclear to an expert eye what was happening to the Challenger. “Initially, we didn’t know what to think,” recalled science teacher Steve Fannin. “But as the moments continued, it was just a shock, utter disbelief… stunned silence.”

“Some of us did the final countdown,” added teacher Charlotte A Gregory. “Everybody was happy. I guess we did not believe what we saw. We were still hunting for the shuttle at the time we saw the explosion.”

The flight deck tape recorder recovered from the wreckage later revealed the final words of the Challenger crew. Amid happy chatter, Commander Dick Scobee said, “Roger, go at throttle up.”

A supposed transcript of a “secret NASA tape” circulated online and in the tabloid media during the 90s. It appeared to reveal the crew’s panic and prayers as they fell back to Earth. However, the fact-checking website Snopes found that this transcript is fake.

As the Challenger disintegrated, debris started to rain down. “Reporters started running, planning to make their way to the landing strip several miles away where the shuttle was to return in an emergency,” Sawyer later reported. “There were confused shouts, swearing, a short scream.” 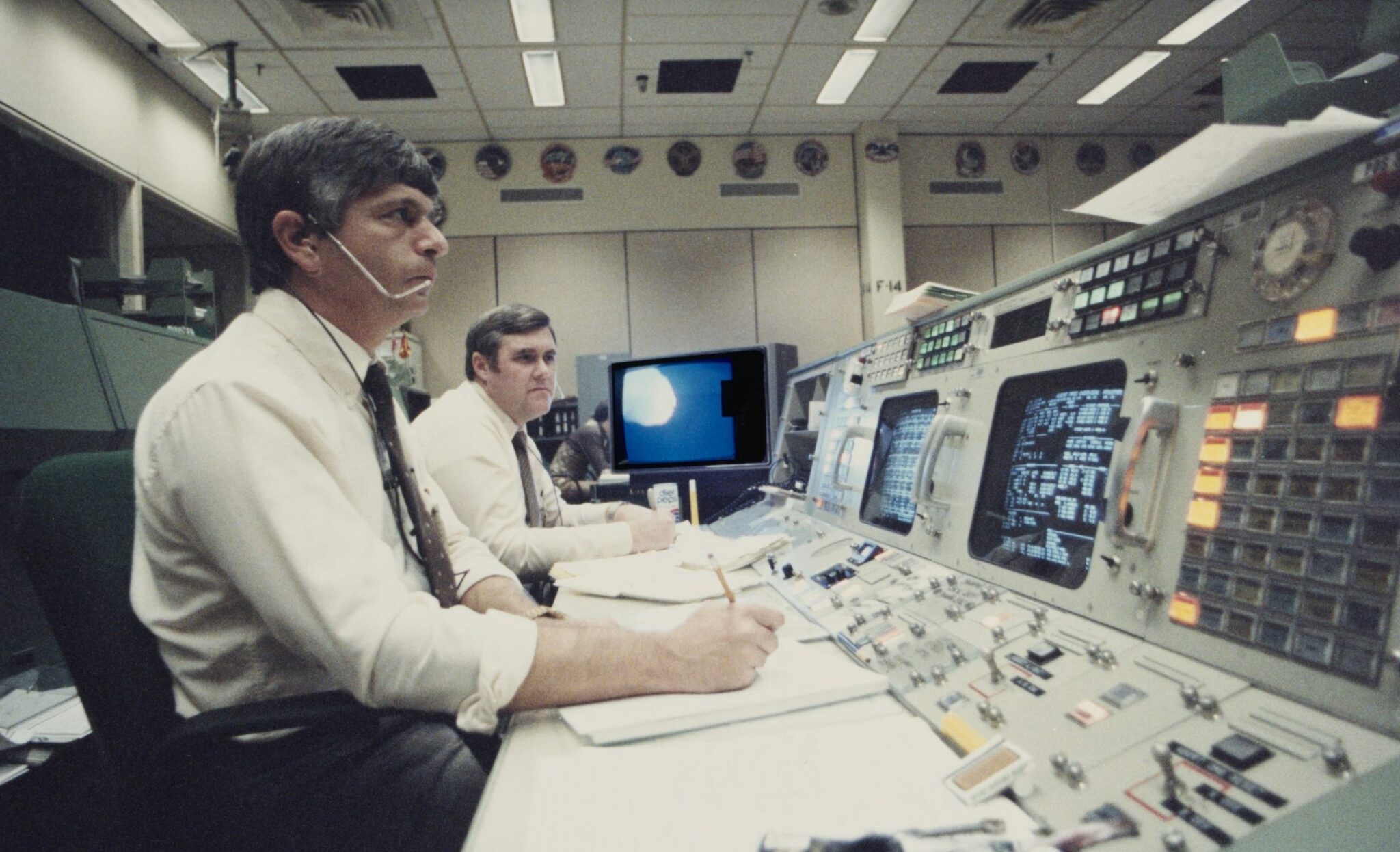 “The rumbling sounds from the sky gradually died away,” she wrote. “The scattered screams and shouts died. The immediate families of the astronauts were escorted quickly away to the crew quarters. Other relatives and visitors were urged onto the buses that had brought them to the scene.”

For months to come, the US Navy and Coast Guard would scour the surrounding land and seas for remnants of the Challenger. Along with hundreds of pounds of metal, they recovered the crew cabin from the ocean floor, which contained the astronauts’ remains.

It has been proven that several crew members survived the spacecraft’s initial breakup, but the return to Earth at terminal velocity was not survivable. All seven crew members were killed in the accident. 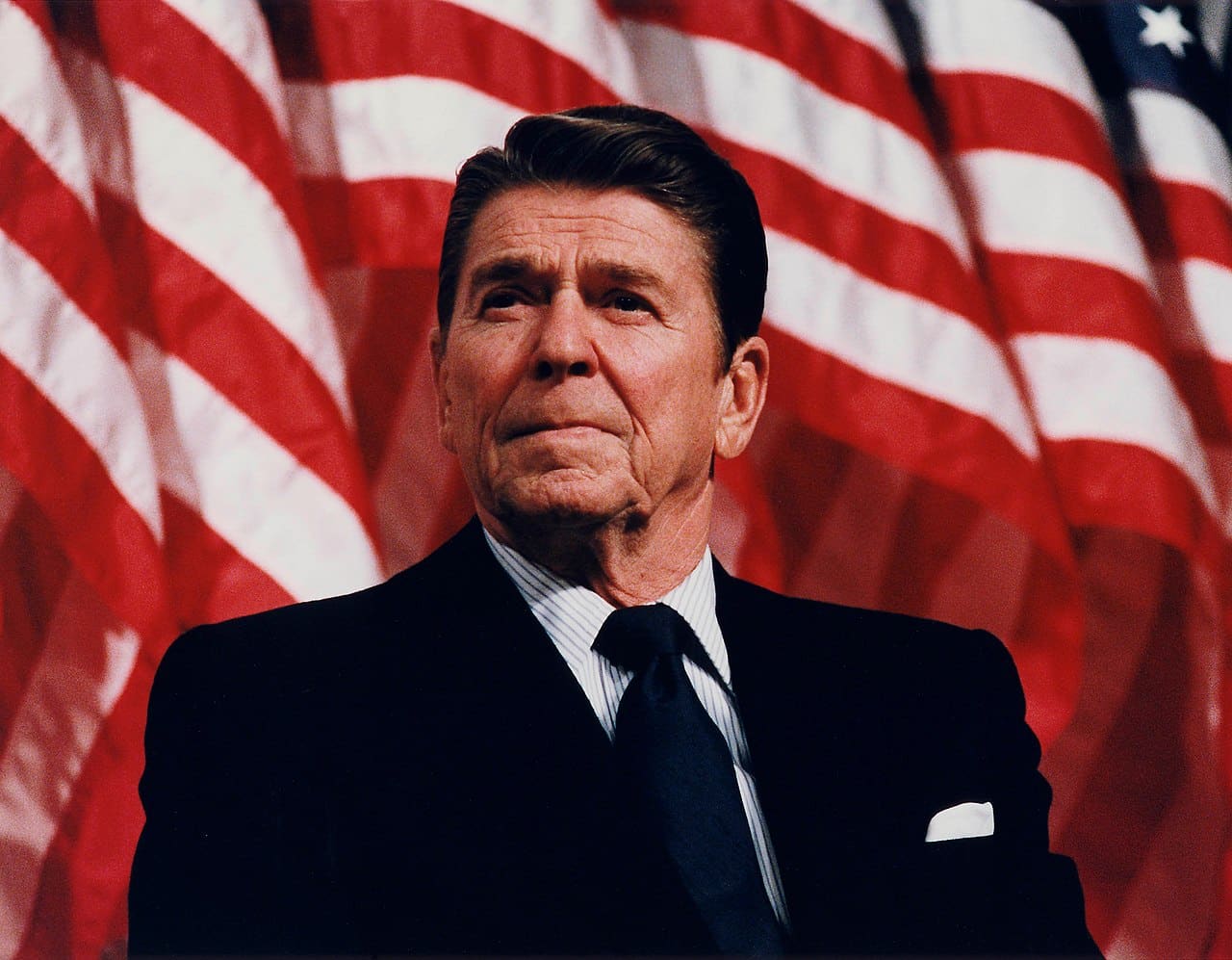 Speaking to a horrified nation after the accident, President Ronald Reagan paid tribute to the victims. He addressed the bereaved families: “Your loved ones were daring and brave, and they had that special grace, that special spirit that says, “Give me a challenge and I’ll meet it with joy.” They had a hunger to explore the universe and discover its truths. They wished to serve, and they did. They served all of us.”

“There will be more shuttle flights and more shuttle crews and, yes, more volunteers, more civilians, more teachers in space,” Reagan also pledged. “Nothing ends here; our hopes and our journeys continue.” But NASA would halt its Space Shuttle launches for three years after this disaster, and the Challenger cast a lasting shadow over the space industry. 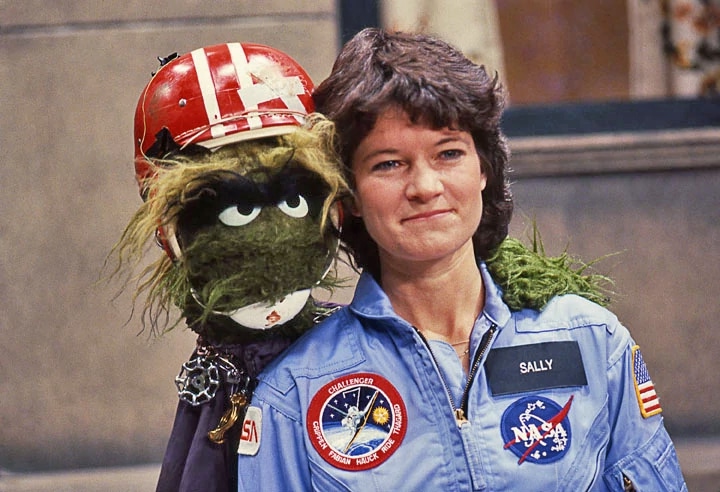 The Challenger accident did not dissuade other pioneers from promoting space exploration, however. Sally Ride, the world’s most prominent female astronaut, was among those most acutely affected by the accident – but it didn’t break her resolve.

“I knew five of them very well,” Ride has said of the Challenger astronauts. “Four of them were in my same astronaut class, and we had been together for almost eight years at the time of the accident. So we were very good friends. It was very hard.”

On space safety, she noted in 1998: “I think most astronauts recognise that the space shuttle program is very high-risk, and are prepared for accidents. After the Challenger accident, NASA put in a lot of time to improve the safety of the space shuttle to fix the things that had gone wrong.”

Lawrence Mulloy, the NASA project manager for the Challenger’s solid rocket boosters, had discussed the weather conditions on the morning of the launch but did not mention the engineers’ O-ring concerns. He was named in a $15.1 million negligence lawsuit led by the widow of a crew member, and took early retirement in 1986. 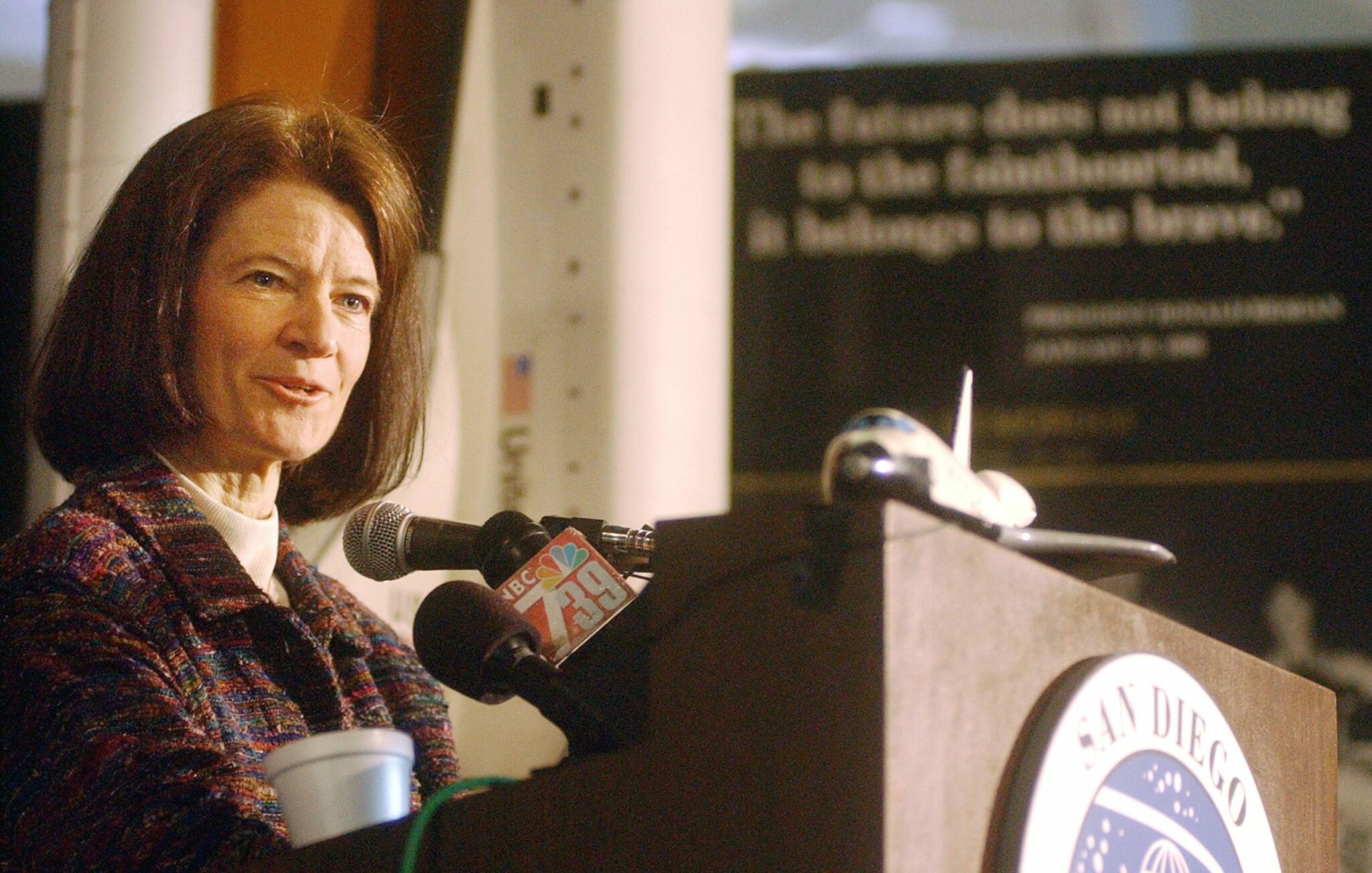 When engineer Boisjoly went public regarding his early concerns about safety on the Challenger, he was shunned by many staff at NASA and Morton Thiokol. His testimony suggested that these institutions were neglectful and could be responsible for the disaster. But after he spoke at a presidential commission about the disaster, Sally Ride hugged him in public, showing her support.

“The space shuttle is a better and safer rocket than it was before the Challenger accident,” Ride added. After retiring from NASA, Ride devoted much of her later career to writing children’s books, inspiring the next generation to pursue the Space Age dream.