Remembering Freddie Mercury, The Greatest Showman Of All Time? 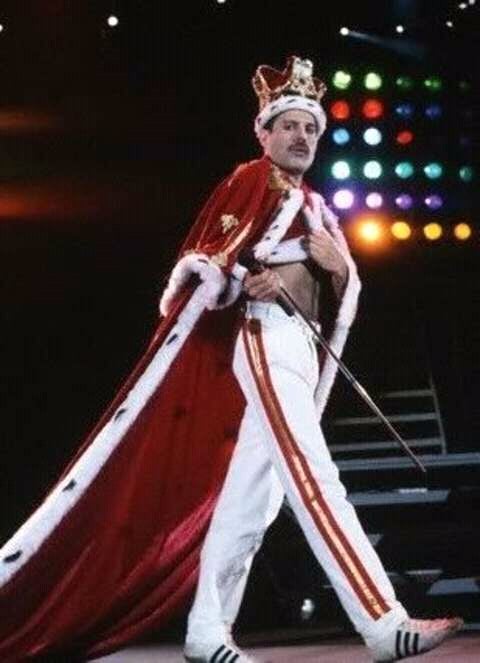 Freddie Mercury, the greatest showman of the 1980’s, a leading runner even for the greatest showman of all time. The incredible music of Queen has stood the test of time, its still just as incredible and popular now as it was back in the 70’s and 80’s. Many bands looked up to Queen, and influenced them hugely on their musical journeys, including, Metallica, Red Hot Chili Peppers, Guns n Roses, and U2. 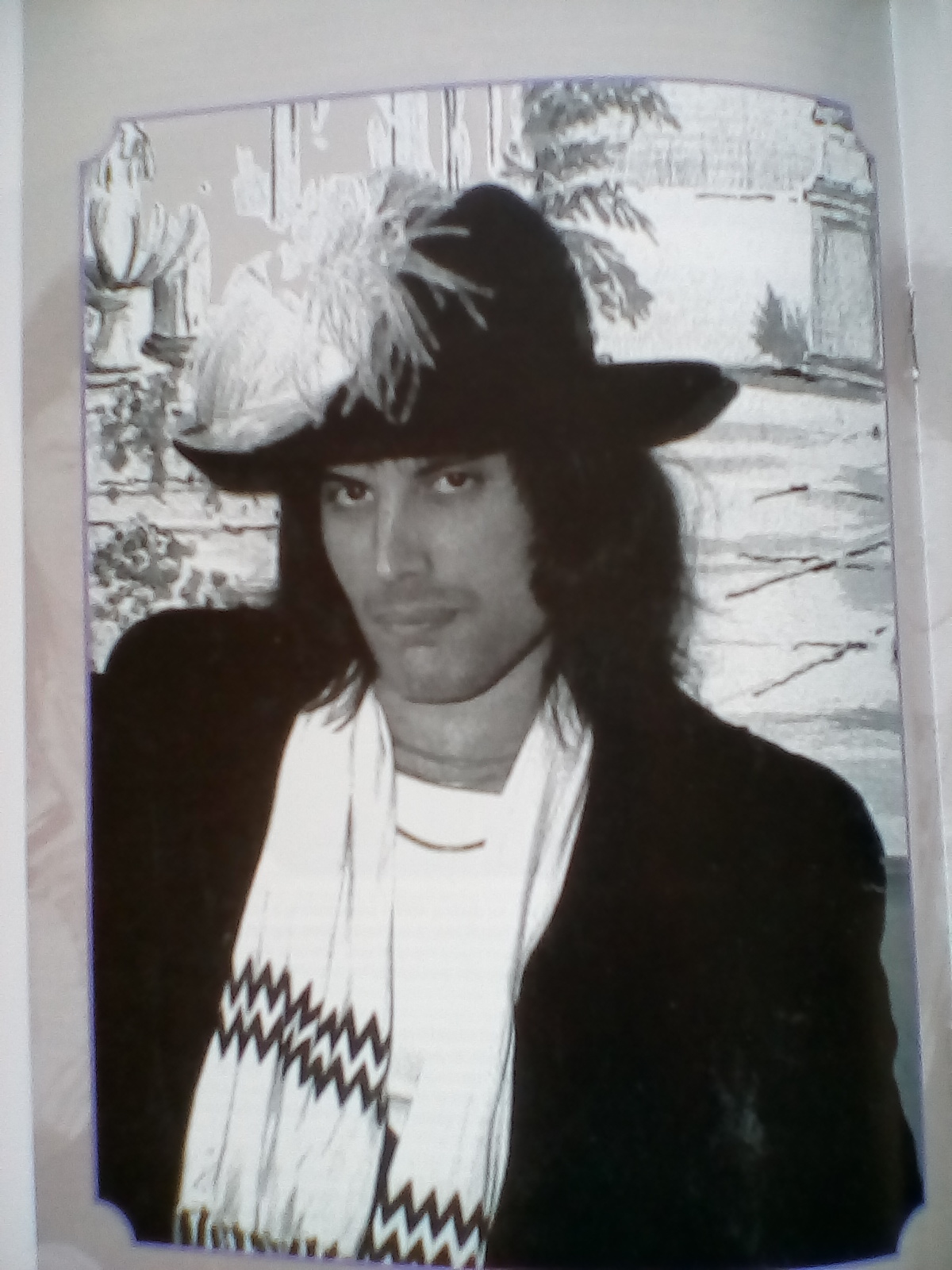 Freddie Mercury’s birth name was Faroukh Bulsara. Born on September 5th 1946, in Zanzibar, to parents, Bomi and Jer. In 1947 Freddie moved to India, he attended boarding school in Panchgani, just outside Bombay (now Mumbai). It was whilst there that he began to be called, Freddie.

At boarding school Freddie began piano lessons, he even reached grade 4 in practical and theory.

In 1963 Freddie’s family, with his little sister, Kashmira, moved to England. Freddie attended Isleworth School, until 1964, he left with three O Levels and one A Level in Art. Freddie’s next step was Ealing College of Art, to study Graphic Illustration. He left in 1969, with a Diploma in Graphic Art and Design. 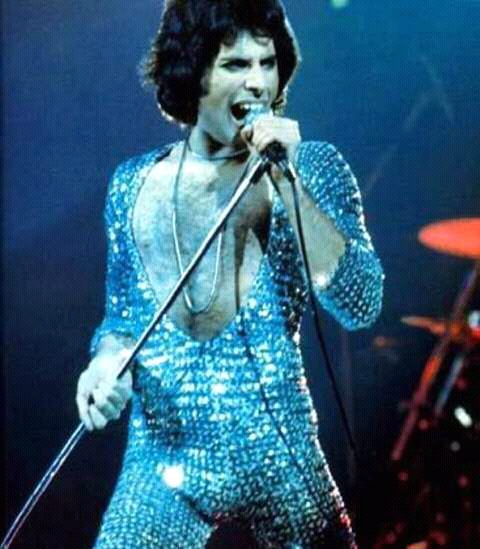 In 1969 Freddie joined his first serious band, they were called, Ibex. 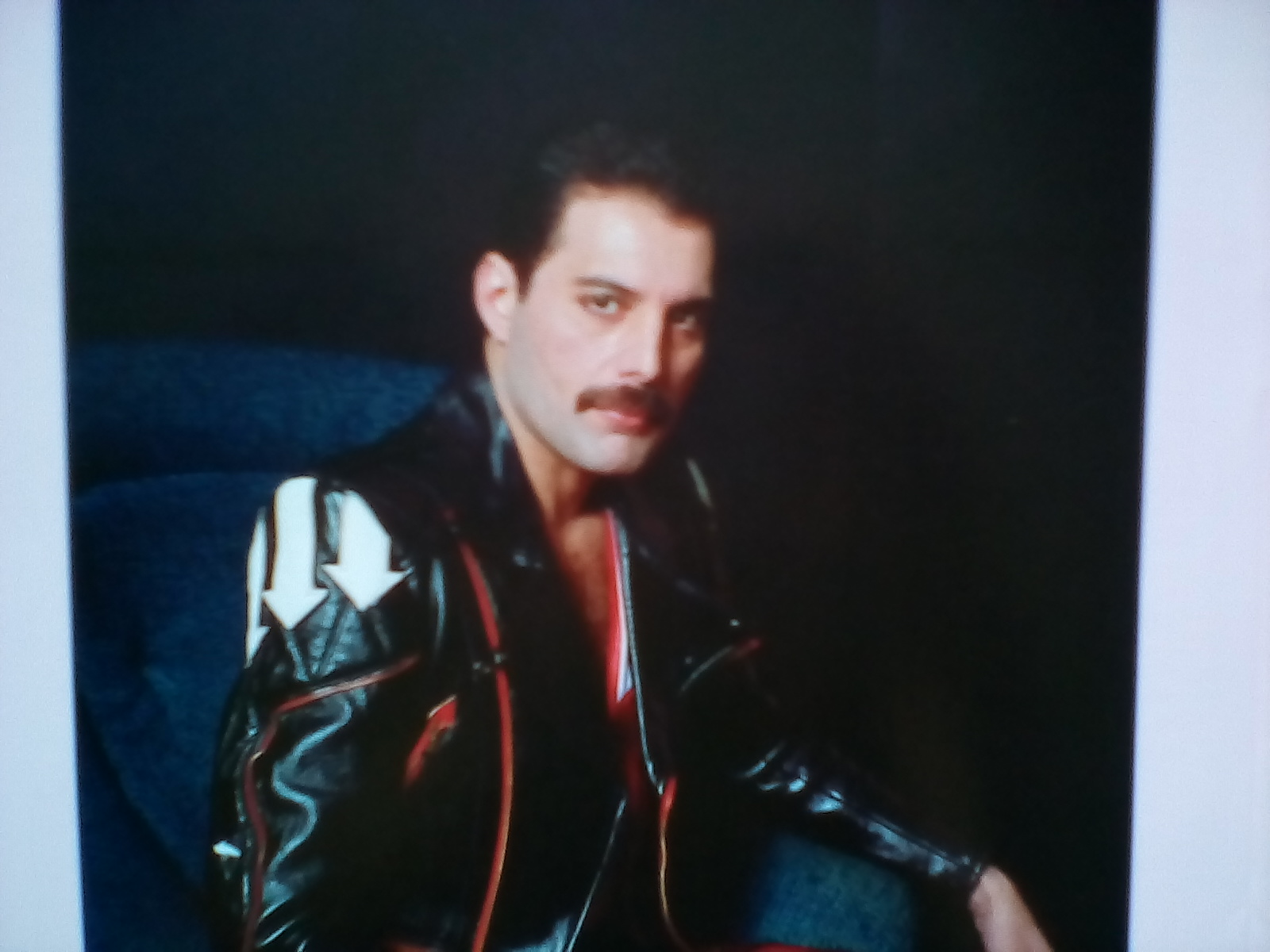 Freddie also loved the opera, and ballet. His favourite actress was Marilyn Monroe. Aretha Franklin was one of his favourite singers. He liked to drink Cristal champagne or iced vodka. He also loved Indian food. 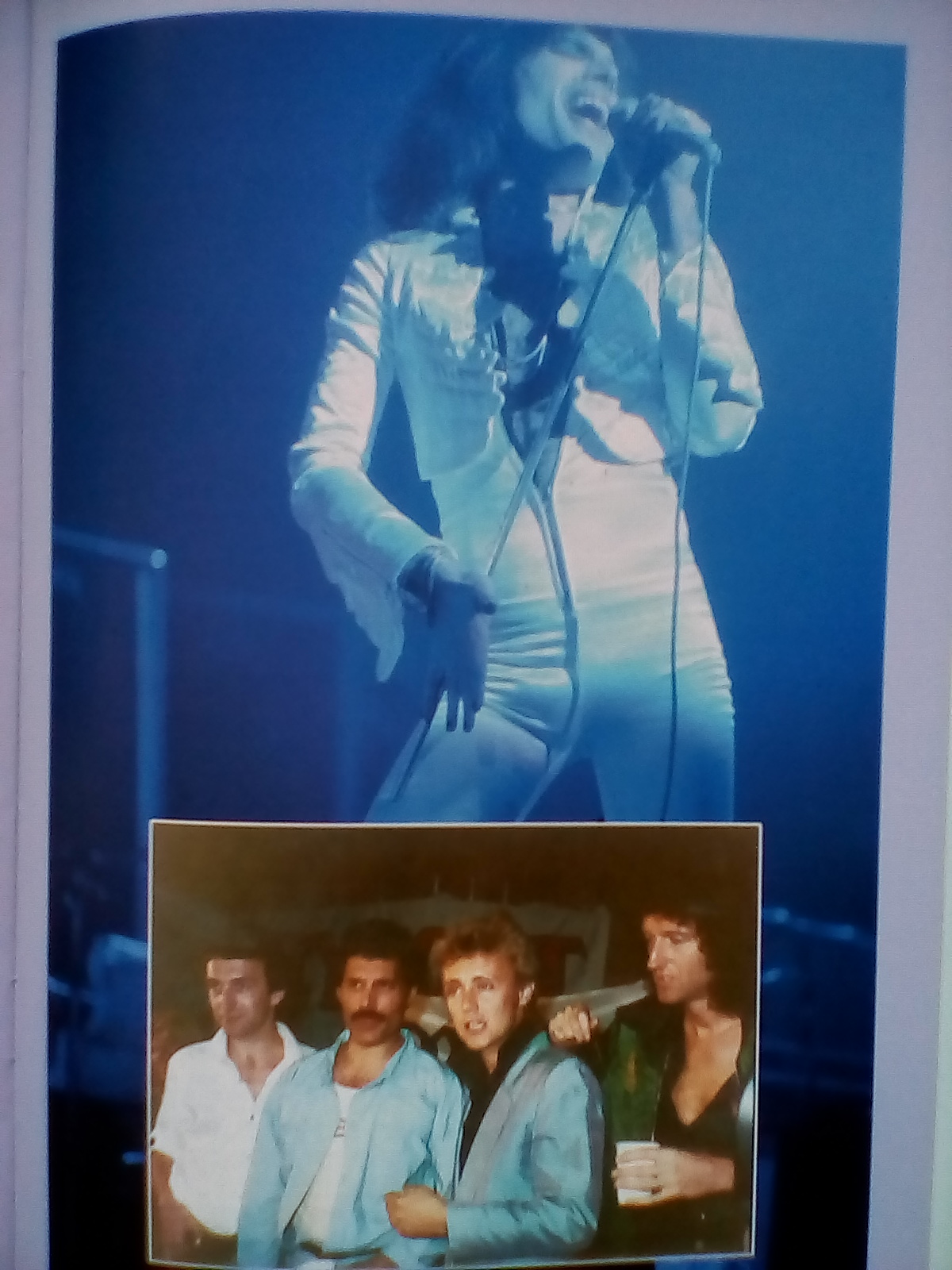 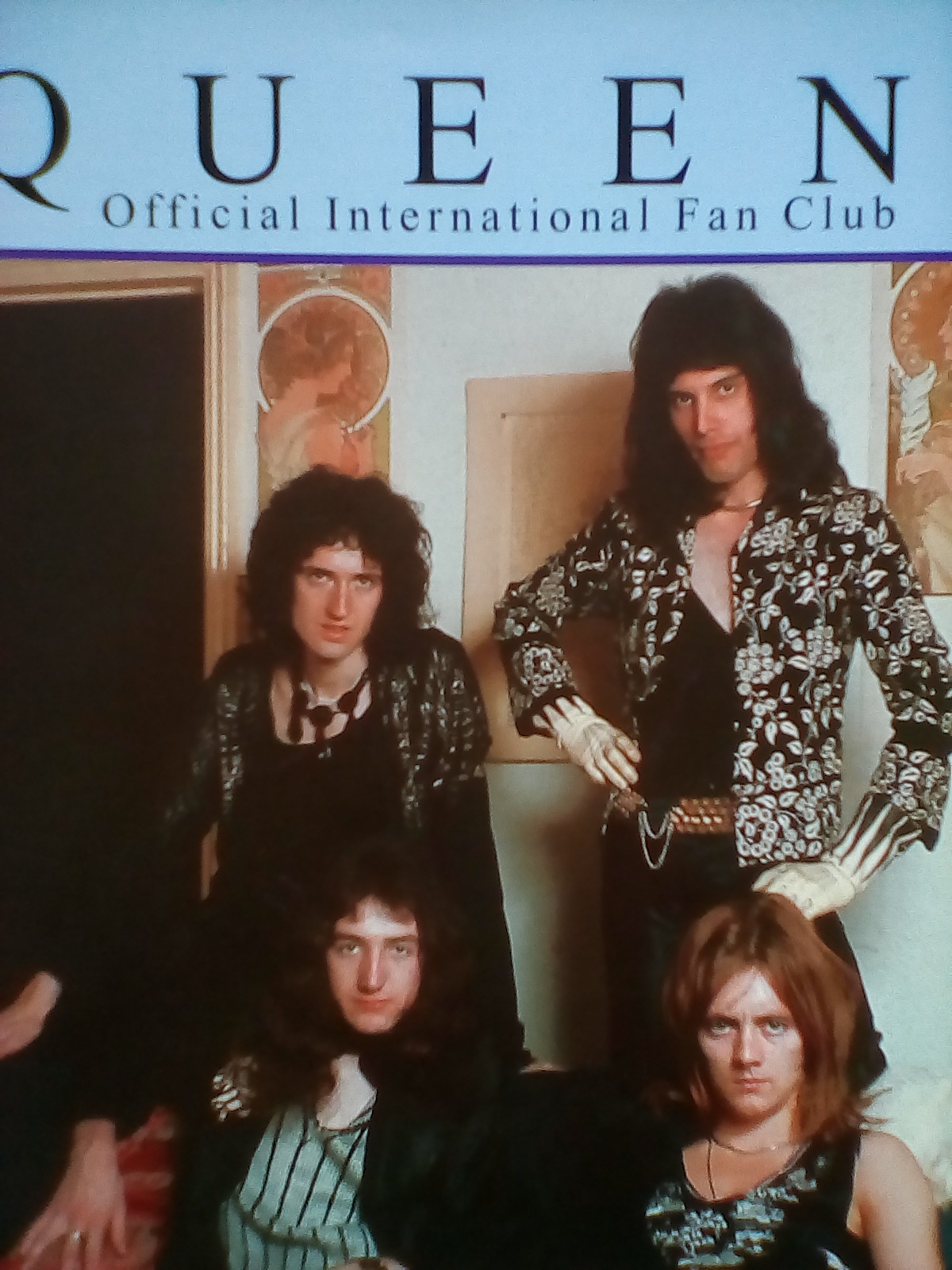 It was 1968 Brian May with a friend, Tim Staffell, wanted to form a group. They were both students at London’s Imperial College. Brian put an ad on the College notice board, for a ‘Ginger Baker’ style drummer. A medical student called, Roger Meddows Taylor auditioned, he got the job. A three piece band was formed.

The band was called, Smile. They were signed by Mercury Records in 1969, that same year they had their first experience in a recording studio, at Trident Studios.

Tim Staffell also had attended Ealing College, with Freddie. They remained good friends, and one day he introduced Freddie to his band members, Brian May and Roger Taylor. Freddie became a huge fan of Smile.

But nothing seemed to be happening with Smile, so in 1970, they called it a day. Tim went off to join a band called Humpy Bong. Freddie left his band, Ibex. He joined forces with Brian and Roger, and the Queen journey began. 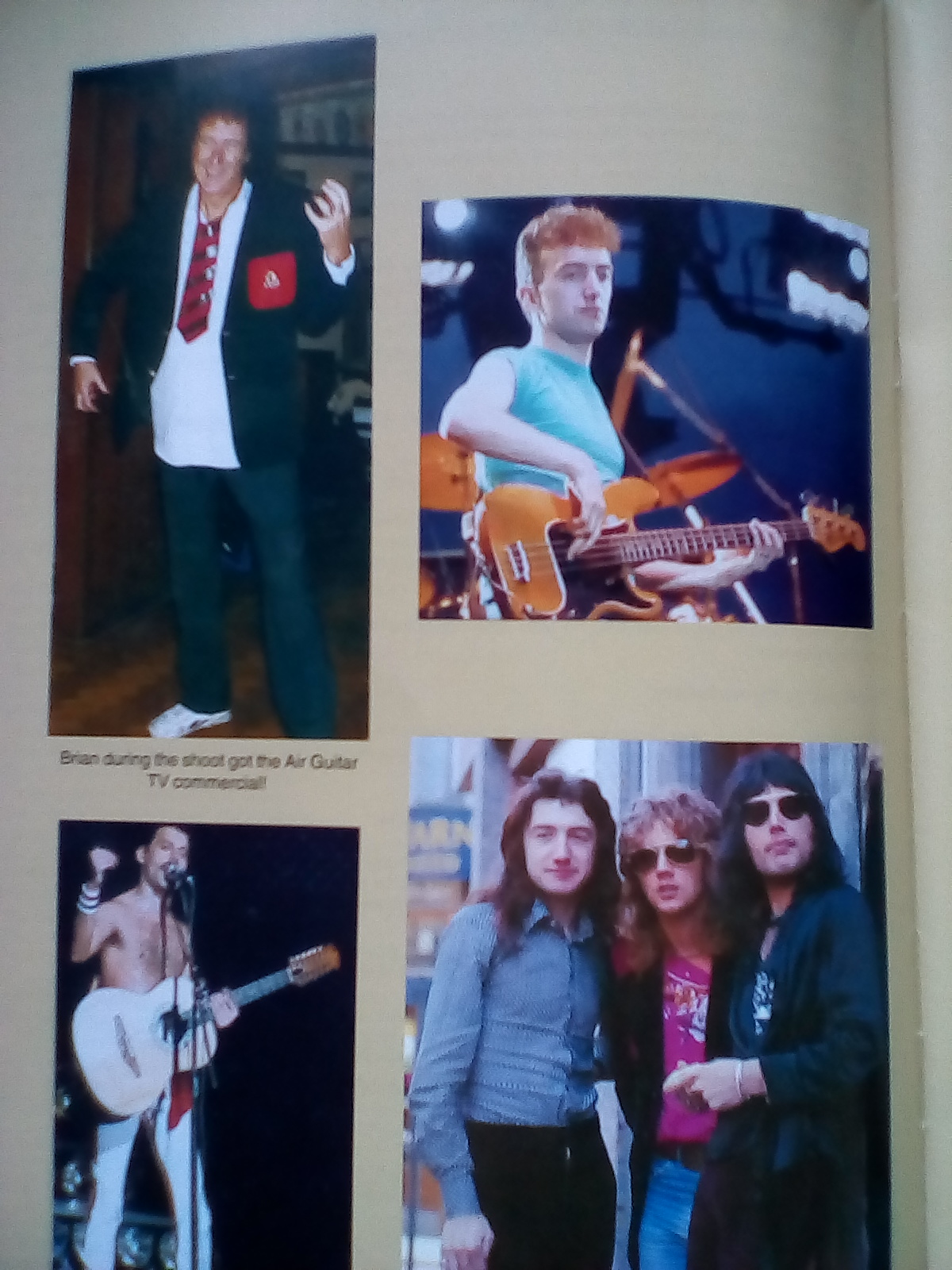 Freddie changed his nane by deed poll to Mercury. He also of course, changed, Smile to Queen.

They had trouble keeping hold of bass players, three came and left within a very short space of time. Then a man named John Deacon, originally from Oadby, Leicestershire, was asked to audition. In February 1971, John officially became the fourth member of Queen.

Queen worked hard, rehearsing as often as they could, they played several small shows at Imperial College. The band were offered the chance to test out a new recording studio, called, De Lane Lea, and in return for testing out new equipment they could make free demo tapes, which they did.

In 1972 Queen signed a recording, publishing and management contract with Trident. During that year they were paid just £60 a week. At Trident Studios Queen were given the ‘out of hours’ studio time, this is where work on their first album began. 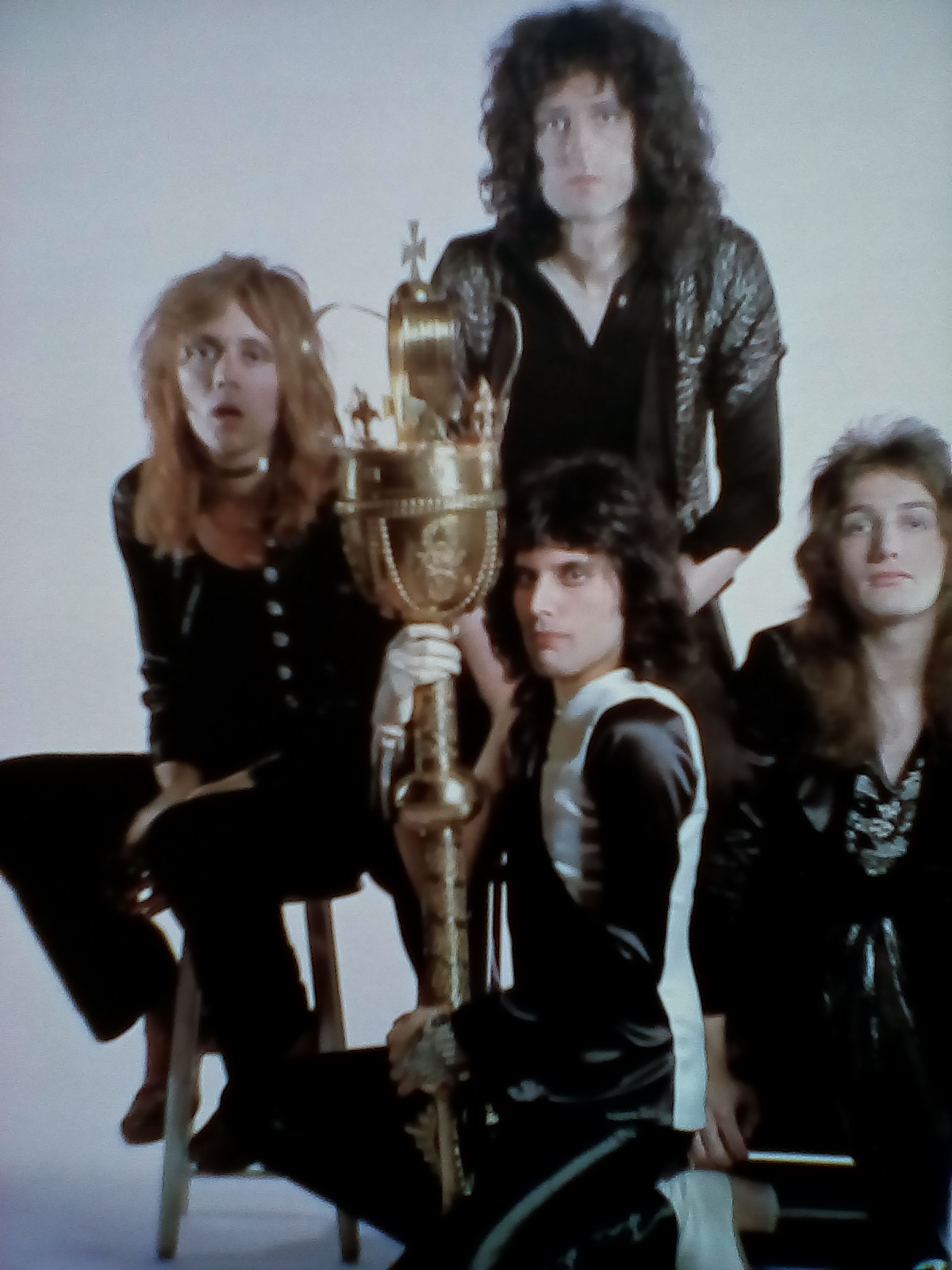 1973 Trident and EMI signed a contract for a recording deal with Queen. In July their first album, Queen, was released.

They got offered their big break, with their first major tour, as a support band to, Mott The Hoople. The tour began in Leeds that November. It was said by many on that tour, that it was clear that Queen were more than just a support act.

The second album, Queen II, was released in 1974, and their first headlining tour of Britain began in Blackpool in March that year. The following month they embarked on their first American tour, as guests of Mott The Hoople. Tragically in May, whilst in tour, Brian collapsed with Hepatitis, so the band had to cancel the rest of the tour.

Work on the third album began and when Brian was well enough he went to the studio to record his guitar parts. Sheer Heart Attack was released in November 1974. It was a huge hit on both sides of the Atlantic! Queen soon made people realise that they were a force to be reckoned with. 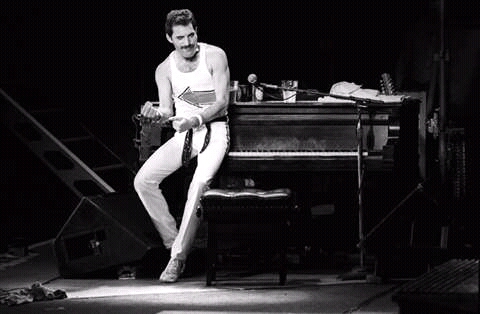 January of 1975, Queen began their first headlining tour of America. Tickets sold out so quickly that they had to add more shows. They even did two shows in one day at some venues!

The world had well and truly caught on to the magic of Queen. Even more so in 1975 after Freddie gave his friend, London DJ Kenny Everett, a copy of Bohemian Rhapsody, saying it was just for him and don’t play it on air. But of course he did play it on air! Fourteen times in two days!

From then on every radio station played Bohemian Rhapsody. It was a huge hit. It stayed at number one in the UK charts for an incredible nine weeks. Queen had established themselves as ‘the’ band of an era. 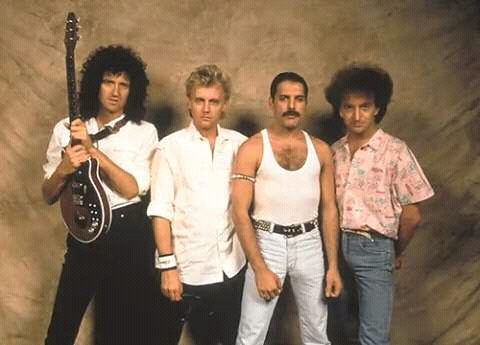 Queen continued successfully touring and recording, by December 1980, they had sold over 45,000,000 albums world wide. In 1981 they played two nights at the massive Mirumbi Stadium, in Sao Paulo, South America. In the first night 131,000 people attended, Queen made rock history, it was the largest paying audience for a single band anywhere in the world. During those two nights at the Stadium 251,000 people came to see Queen, that’s a bigger audience than most bands can expect to see in their whole career!

During their trip to South America every single one of their albums was in the Argentina Top Ten, a first for any band.

In 1981 out came the Greatest Hits Album and it’s rarely been out of the British charts since.

By 1985 with success all over the world, they had decided to take a break from each other, but then this happened… 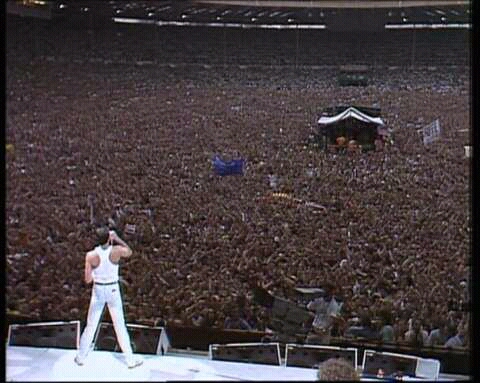 July 13th 1985, was a day that went down in history as Live Aid took the world by storm, from London’s Wembley Stadium, and from Philadelphia, in the USA.

Queen was just one of the multitude of top bands, who all performed a twenty minute set.

The whole world was watching, and Queen were voted unanimously, by the press and the public alike, as the band who stole the show. 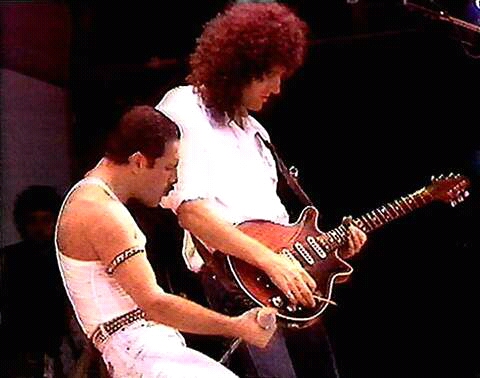 Live Aid was a turning point for Queen. They know longer wanted a break from each other, quite the opposite, that day had brought them all together with renewed vigour and enthusiasm. From the bands fresh, new inspiration came their next release, One Vision.

The Queen success train continued. Including playing at Knebworth in 1986, to an audience of over 120 thousand people. 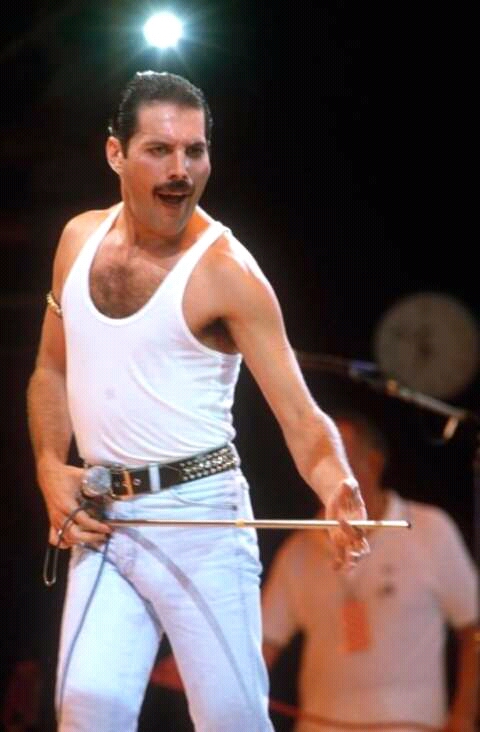 On November 23rd 1991 Freddie announced to the world that he had AIDS, and sadly, his fight was over the following day. On the 24th November 1981, Freddie Mercury died. He passed away peacefully at his home, surrounded by family and friends. He was just forty five years old.

The world was in shock.

Freddie had kept his illness private, only those closest to him had been aware of just how ill he really was.

Fans from all over the world sent flowers and cards. Many travelled to pay their respect to outside of Freddie’s home.

Three days after Freddie’s death a quiet family cremation service was held. Conducted in the Zoroastrian faith, which Freddie’s parents followed so strictly. 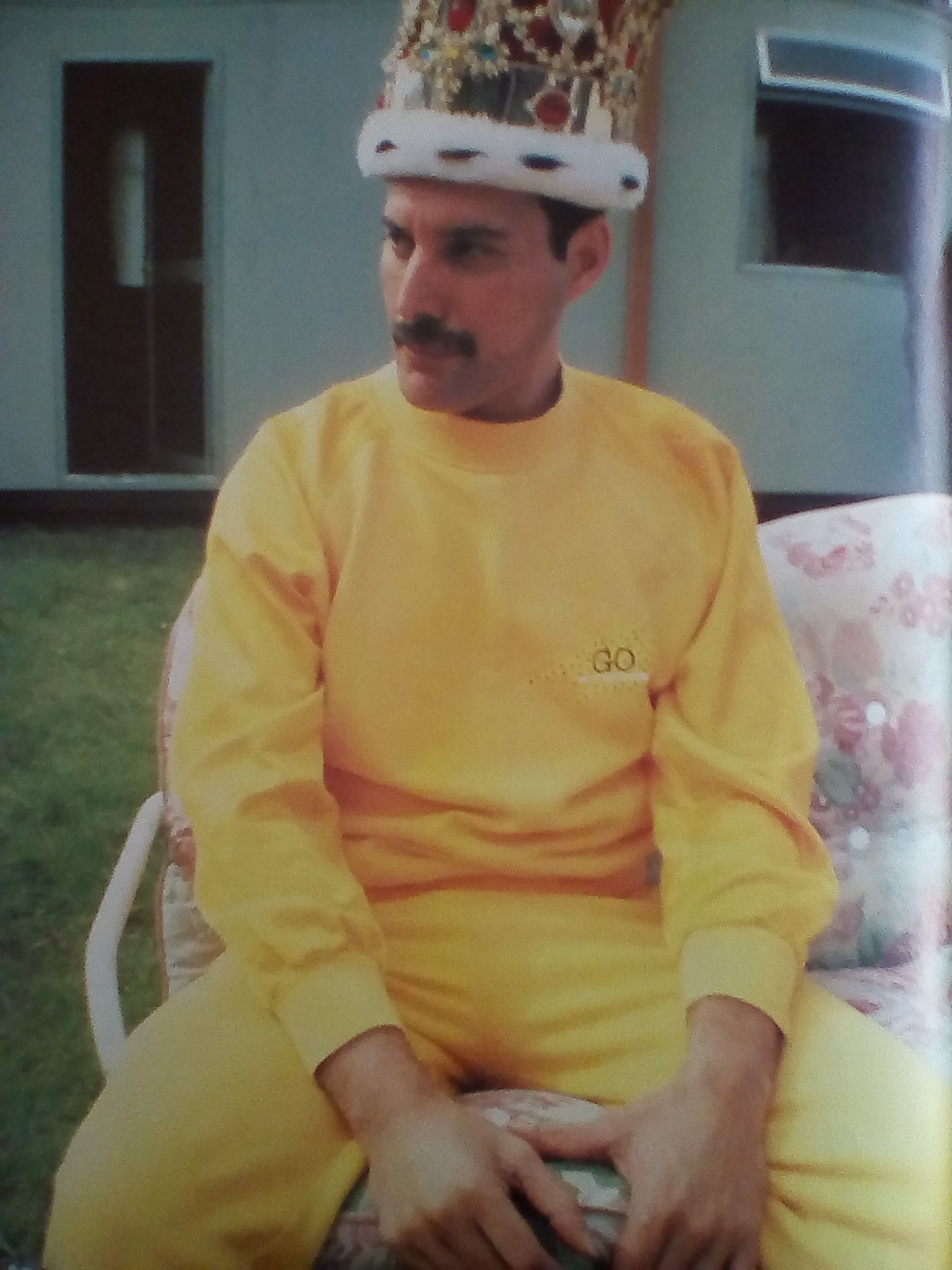 As a tribute to Freddie, and to raise funds for the Terrence Higgins Trust, to continue the fight against AIDS. Freddie had requested, as a last wish, that Bohemian Rhapsody and These Are The Days Of Our Lives were to be released as a double A sided single.

It entered the UK charts at number one, where it remained for five weeks. It raised over one million pounds for the AIDS charity.

In December 1991, Queen had no fewer than ten albums in the UK Top 10. In February 1992, at the BRITS awards, they honoured Freddie with a special award for his ‘Outstanding Contribution To British Music’. At the awards Brian and Roger announced plans for a massive concert at Wembley Stadium to remember Freddie’s life and give him a huge send off to remember.

The tickets went on sale the following day, with no mention of the bands who would be performing, apart from Brian, Roger and John. All 72,000 tickets sold out in just six hours!

The concert was televised live on Easter Monday, 20th April 1992, to a viewing audience of over one billion people.

People from all corners of the world loved Freddie Mercury. 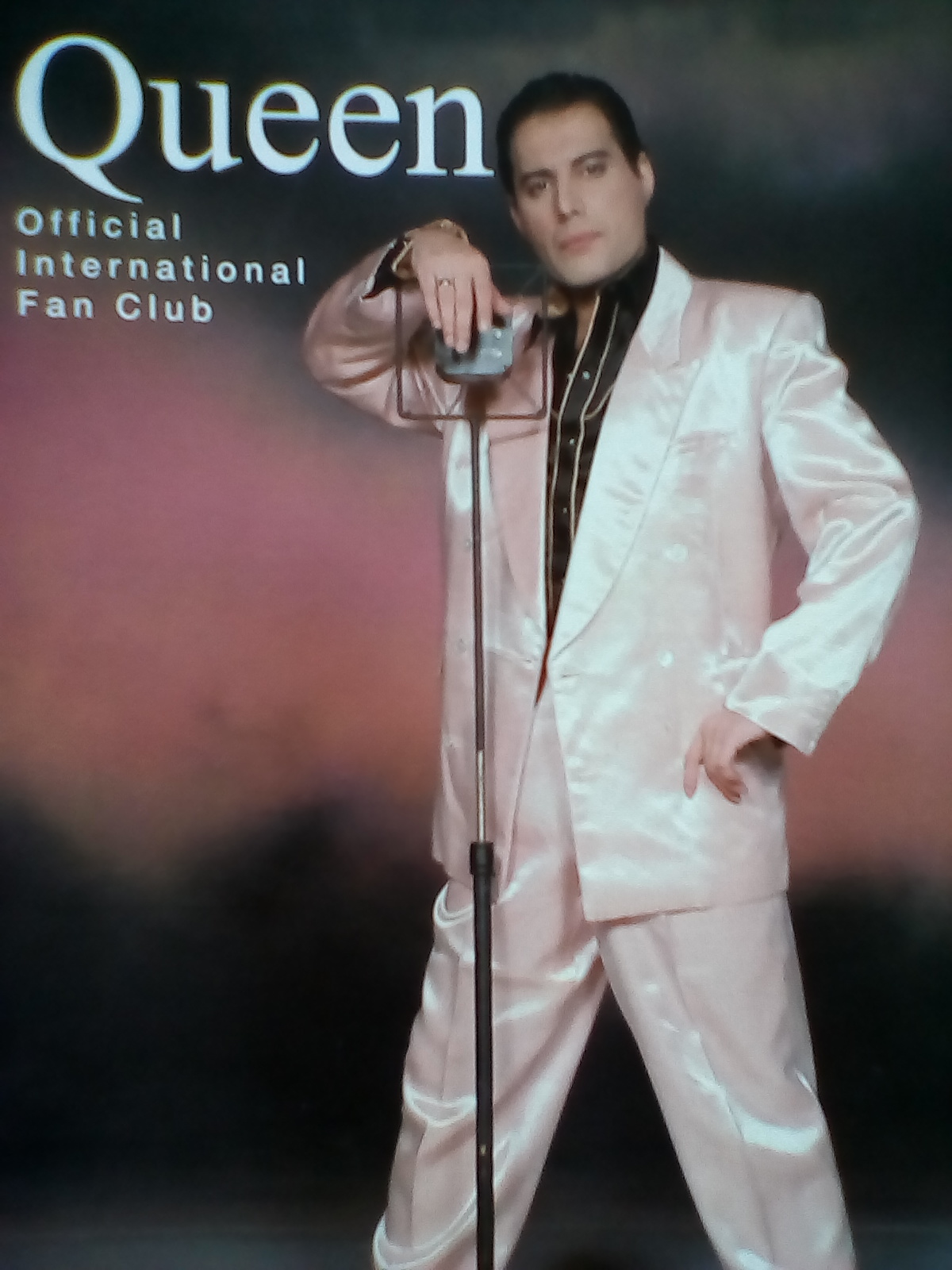 Yes he had great musicians behind him, Brian May, Roger Taylor and John Deacon. But they would never of had the success they had without Freddie. Queen would not of been the band we all know and love, without Freddie Mercury.

Its 27 years since Freddie’s death, he is still looked up to by many musicians, and Queen music is still in a league if its own. Off the stage Freddie was actually a shy man, he rarely did interviews. It was on stage, in front of the fans, that Freddie turned into one of the greatest showman we are ever likely to see. A pure genius.