Remember Rex Smith From Street Hawk? Here’s What He Looks Like Now!

The 1980s featured a number of brilliant vehicle-based TV shows, and whilst Knight Rider and Airwolf are often cited as being the best and most popular, we remember a time when a completely different show was streets ahead of the competition, at least in our youthful opinion. Street Hawk may have only run for 13 episodes back in 1985, but we didn’t mind one bit, because we were simply desperate to see the protagonist accelerate his sleek, black motorcycle up to some unbelievably fast and dangerous speeds on the motorway.

But have you ever asked yourself what became of Rex Smith, the actor who played ex-motorcycle-cop-turned-secret-government-agent Jesse Mach? Then read on to find out!

Born on 19th September 1955, Rex Smith was actually a pop star long before he donned his shiny black Street Hawk suit, even making the US top 10 in 1979 with his song You Take My Breath Away.

Despite not charting in the UK, You Take My Breath Away received much airplay on soft rock stations in the US. It was taken from the TV movie Sooner or Later, which also happened to be Smith’s first film role.

Despite being something of an idol who often appeared on the front of teen-focused magazines, Smith’s music career subsequently faltered somewhat.

His only other song to chart was a cover of Everlasting Love in 1981, a duet with Rachel Sweet which reached number 32 in the US and number 35 in the UK.

Smith actually made his acting debut back in 1978 when he starred in a Broadway production of Grease, in which he played the lead role of Danny Zuko.

He also appeared in a number of other theatre productions, including The Pirates of Penzance, The Scarlet Pimpernel and Annie Get Your Gun, but it wasn’t until 1985 that Smith would sign up for the role that he will always be remembered for. 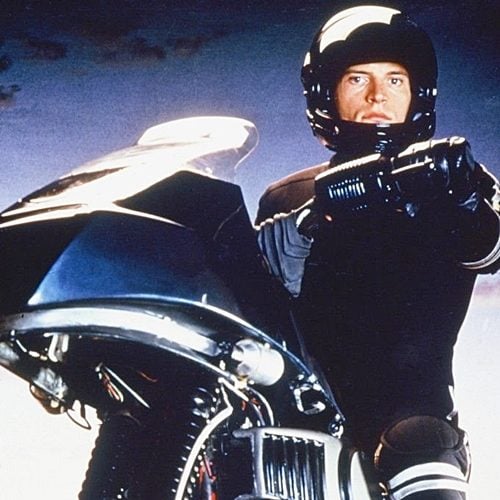 Featuring an incredibly catchy theme tune by German electro-pop group Tangerine Dream, and a Honda bike that could perform some amazing stunts, Street Hawk captured the hearts of many an 80s kid, and is fondly remembered to this day.

Despite there still being a working Street Hawk website, a recent petition started by Smith to get the show remade sadly failed to reach the 100,000 signatures it would need to be presented to a TV network. 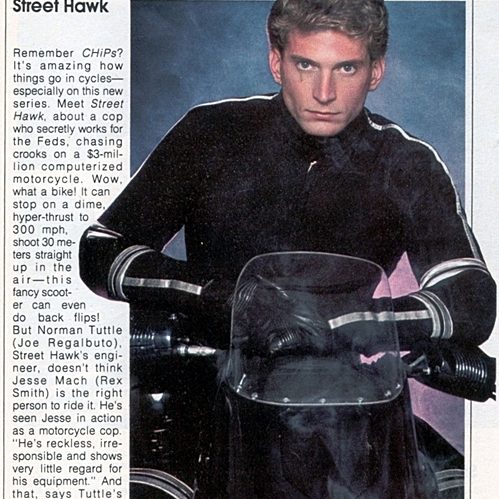 Smith was seen in a number of different TV shows after Street Hawk ended, including Baywatch, but sadly these were often just brief guest appearances.

Smith was the first actor to portray Daredevil on screen, in the TV movie The Trial of the Incredible Hulk, but his planned stand-alone Daredevil TV show never came to fruition.

Smith starred in the US TV drama As the World Turns in the early 90s, but is now more often seen on stage, most recently playing the Captain in The Sound of Music in 2010.

Smith has also occasionally returned to the world of music, releasing an album in 2010 that was originally titled Simply… Rex but later had its name changed to You Take My Breath Away.

Now 64 years of age, Smith is married to Tracy Lin. It’s his fourth marriage, after he divorced former Playboy Bunny Lois Smith in 1983, Jamie Buell in 1995 and Courtney Schrage in the early 00s.

Smith has two daughters from his eight-year marriage to Buell, a son and a daughter with Schrage, and a son with Karen Lakey, who didn’t meet his father until he was 17 years old.

We’re sad to hear that Smith’s petition to get Street Hawk remade failed, but at the same time we’re glad to have the memories of this classic, if short-lived, 80s TV show.