How Much The Princess Diana Beanie Baby Is Worth In 2022

Tales of Beanie Babies now worth tens of thousands of dollars may well surprise those of us who remember these unassuming plush toys from the 90s. Created in 1993, Beanie Babies went from being a hugely popular collectible, to an Internet trend, to an outdated fad – but now, we’re seeing eyewatering prices for them on eBay.

Among the most coveted is the Princess Diana Beanie Baby. Resplendent in royal purple, this toy was announced in 1997 to commemorate the recently deceased princess. Among the stranger commemorative items, this beanie baby features on eBay with asking prices of up to $200,000. While eBay vendors often list the Princess Diana Beanie Baby as worth several thousand dollars, collectors put its real value in 2022 at $5-$100 depending on its condition.

What is the true story behind the astonishing prices of these Beanie Babies? We’re taking a closer look at how much the Princess Diana Beanie Baby is actually worth – and why anyone would value it so highly. 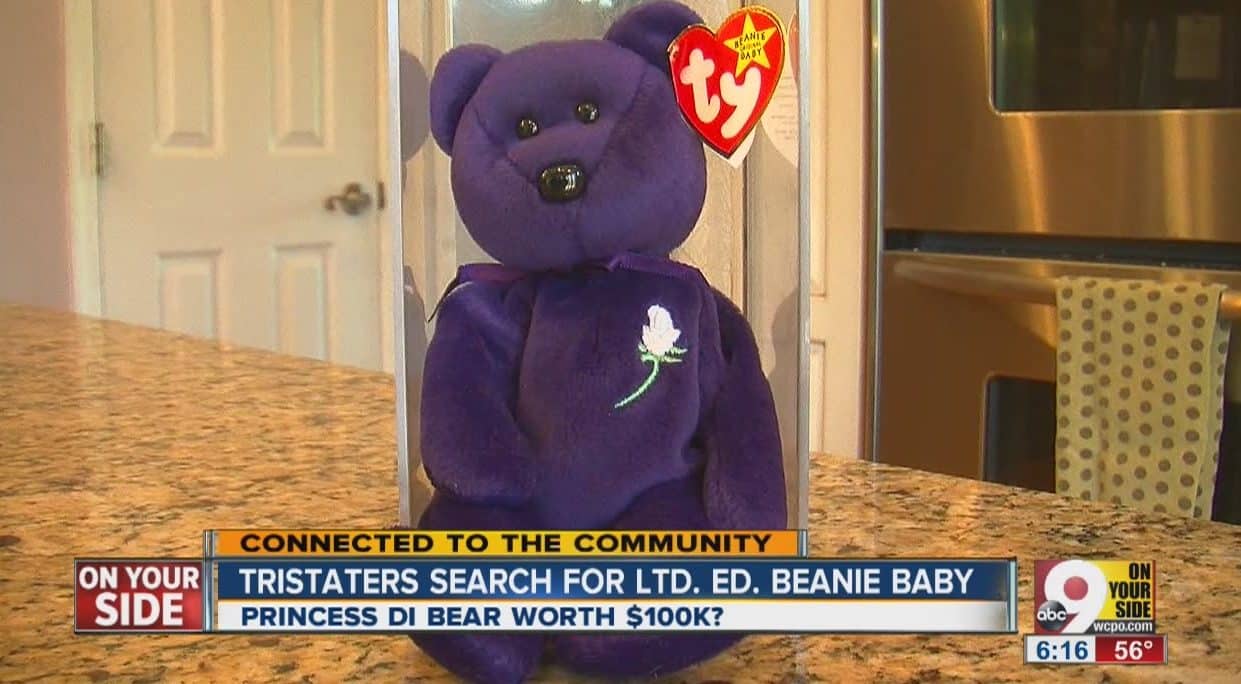 When Princess Diana perished in a car crash in August 1997, she was immortalised as ‘The People’s Princess’ in countless commemorative items. While personal items such as her 1970s blue Rayleigh bike and her velvet Met Gala dress have sold for £44,000 and £264,000 respectively at auction, there were also mass-produced pickings to commemorate the beloved figure.

Beanie Babies producer Ty Inc announced its own commemorative item in October 1997. A special-edition plush named ‘Princess the Bear’, with a purple ribbon and white rose around her neck, came out in stores two months later.

All profits were donated to the Diana, Princess of Wales Memorial Fund, a foundation that continued the princess’ humanitarian work after her untimely death. The toys sold for around $5 to $7 at the time. 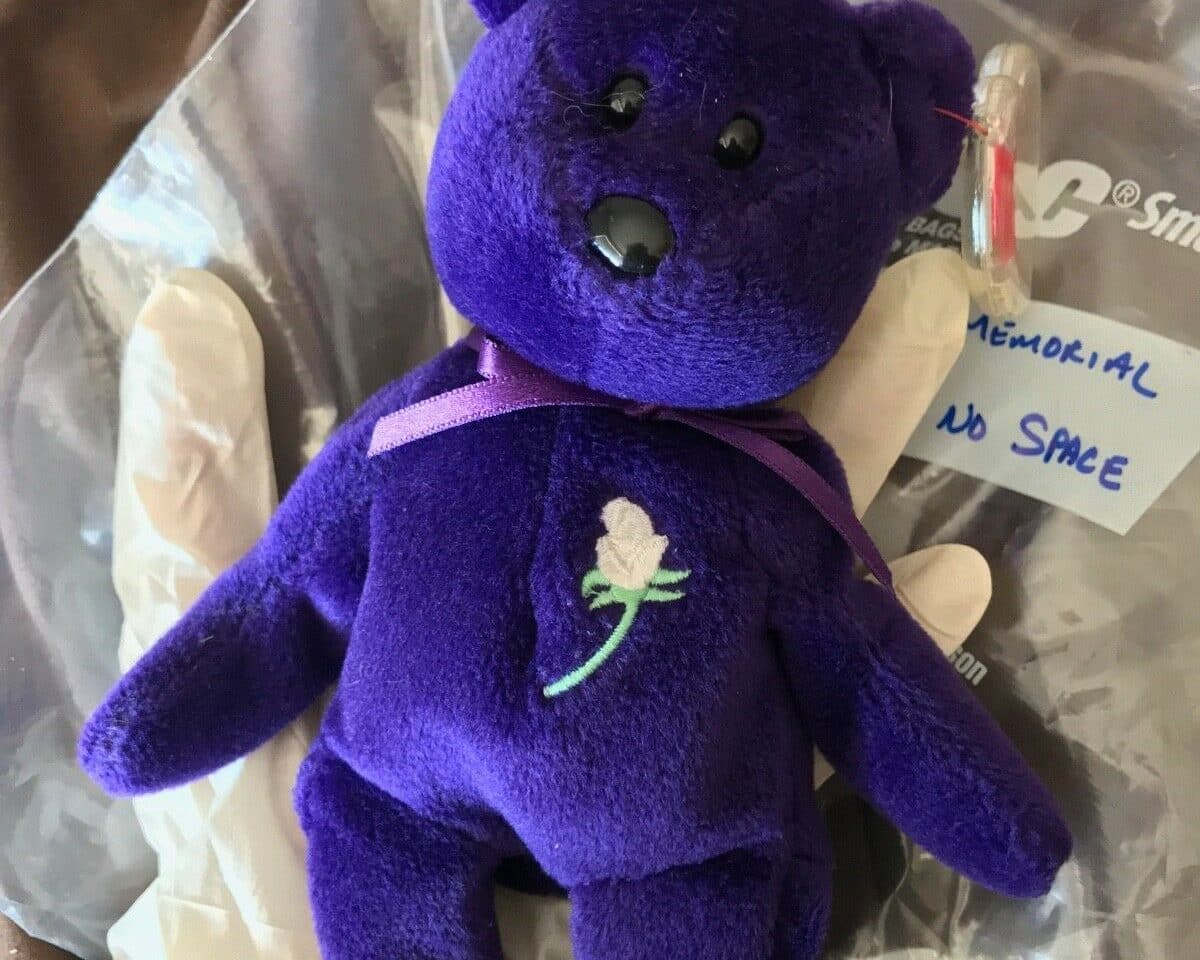 To generate an aura of exclusivity, Ty Inc declared that only 12 Princess the Bear toys would reach the shelves of each retailer. However, when the toy’s huge popularity became apparent, the company changed its tune and chose instead to produce the bears in their thousands. Each Bear’s label bore the following poem:

“Like an angel, she came from heaven above / She shared her compassion, her pain, her love / She only stayed with us long enough to teach / The world to share, to give, to reach.” 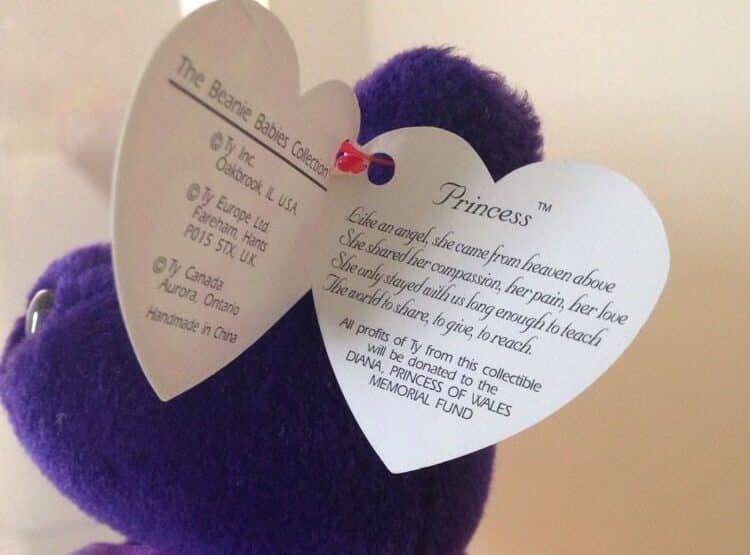 As with many Beanie Babies, first editions are more valuable than later editions. But one batch of the Princess Diana Beanie Baby has generated particular interest over the decades. Produced in Indonesia in December 2007, this batch was filled with PVC pellets – small plastic beads that were mostly scrapped by Ty Inc in 1998 due to their adverse environmental effects. These anomaly toys that slipped through the production net are generally more desirable among collectors.

You can check whether a Princess Diana Beanie Baby is filled with PVC pellets – as opposed to the more common and environmentally-friendly P.E pellets – by reading the toy’s fabric ‘tush tag’. 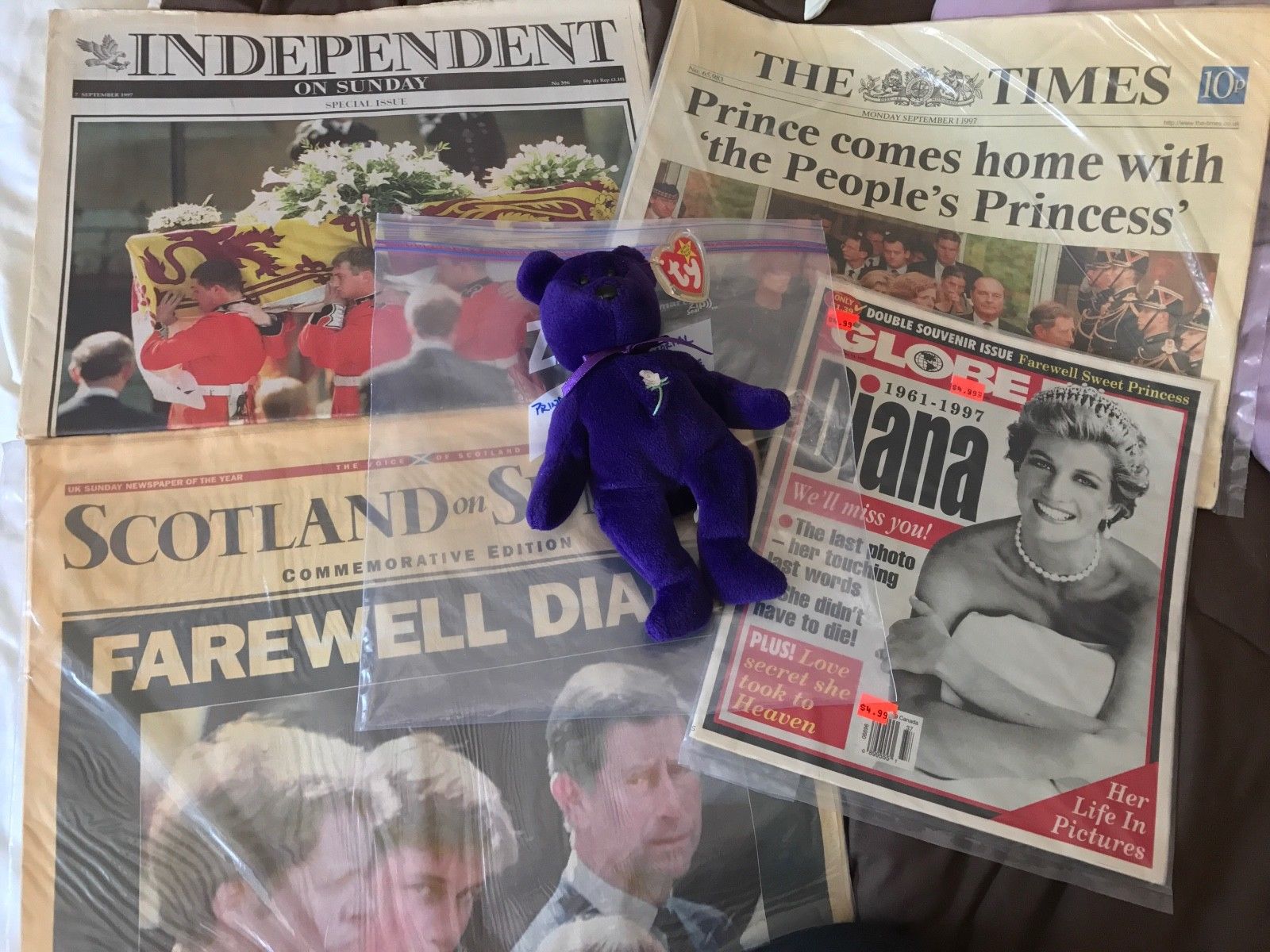 Collectors and Diana fans alike relished the chance to own a Princess the Bear beanie. As the toys flew off the shelves, Ty Inc had collected a total of $21,880,000 to donate to the Diana, Princess of Wales Memorial Fund by April 1999.

The toy’s origins as a limited edition have led many collectors to hope they’re sitting on a hidden fortune. In recent years, several Beanie Baby fans have taken to Twitter in search of updates. 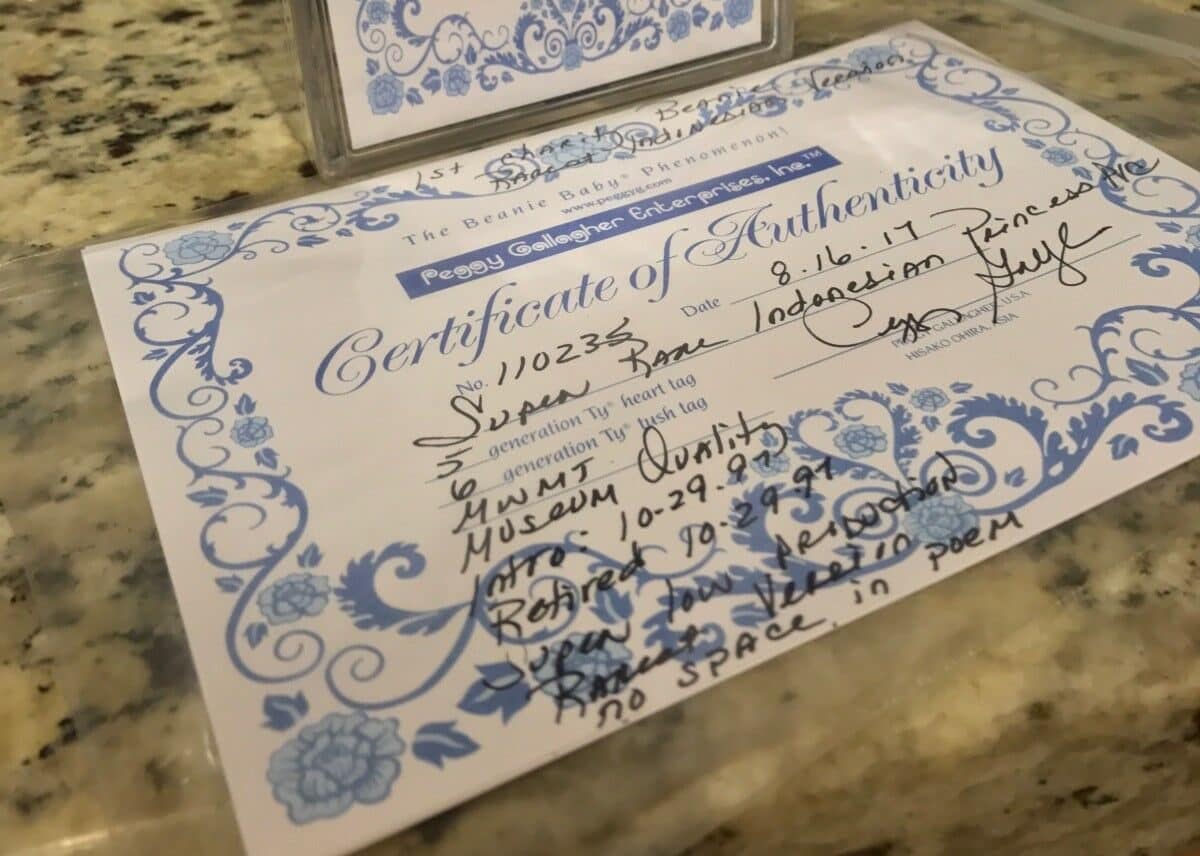 What is the reason behind these wildly varying price points? As the website Tycollector.com puts it, “Some sellers list Princess on eBay and other secondary markets with starting/asking prices ranging from thousands to sometimes hundreds of thousands of dollars. One can only hope potential buyers understand prices that high are not only unrealistic but essentially a joke.”

Some suspect that there is something far more sinister behind the massive listed prices. Collector and historian Leon Schlossberg has described the massive price tags as “bogus”: “You’ll see somebody who lists a Beanie Baby for $14,000. They’ll have an accomplice buy it and then they’ll cancel the transaction, and it’ll disappear from eBay… Its’ either money laundering or bogus transactions.” 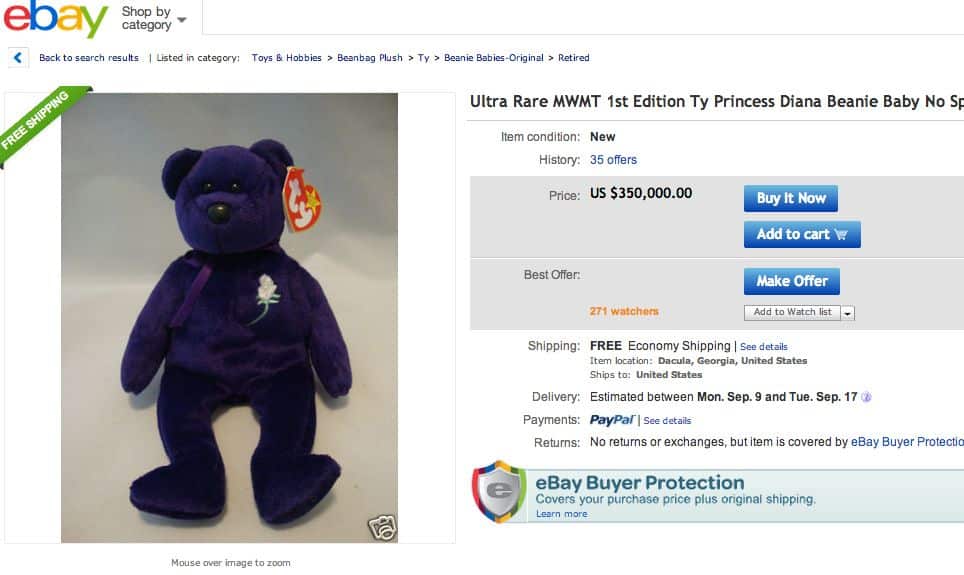 But for the most part, the key detail on eBay is not the asking price, but the price at which the Beanie Babies are sold. Antiques appraiser and star of Auction Kings, Lori Verderame, warns, “When you see… $507,000, that’s not credible because you have to find a sales record for someone (who) actually paid the bill for that.”

“They’re not gonna tell you what it’s really worth because they want you to buy it for the highest price possible,” she summarizes.

According to Tycollector.com, you should only be paying somewhere in the realm of $5 to $100, depending on the country of origin, the rarity of the toy’s swing tag and the type of filling declared on the tush tag.

Verderame adds that the condition of the toy can heavily influence the price. Moreover, topical and historical interest can drive up the amount that fans are willing to play. She says there is “no magic number” for valuing Princess the Bear, but here is her biggest piece of advice: “Collect stuff that relates to history, because it will increase in value.” 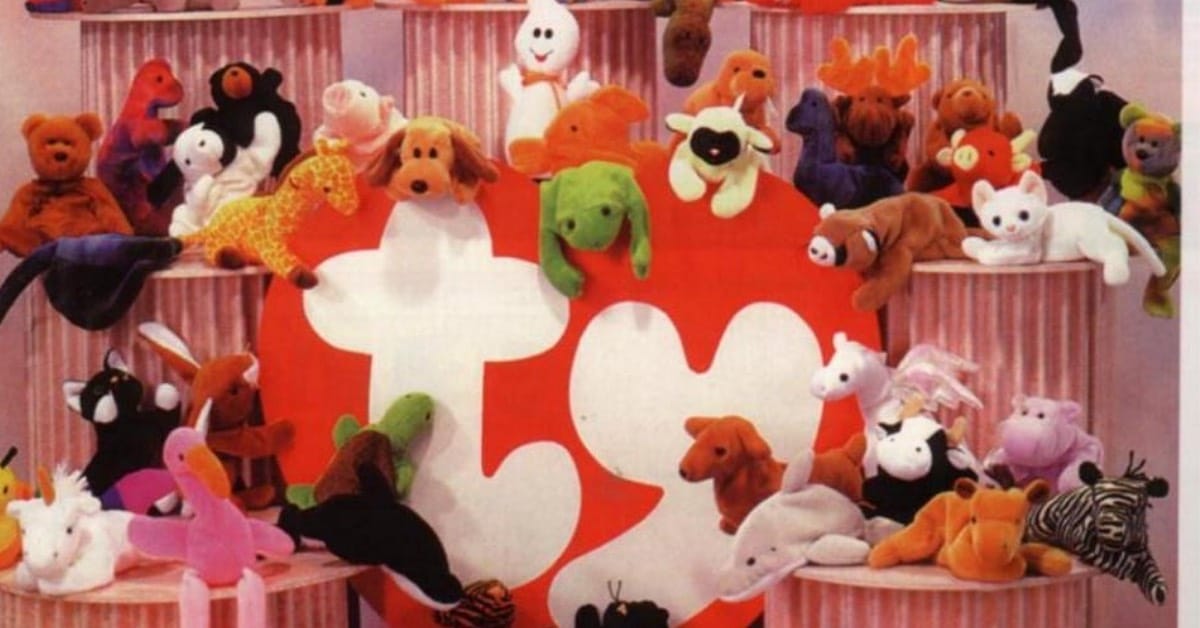 The Princess Diana bear was never truly rare, having been produced in Indonesia and China for years. On the contrary, plenty of Beanie Babies fans have one among their collection.

“The ones that are worth hundreds of dollars will never be the ones that you have,” says researcher Zac Bissonnette. “Peanut the Royal Blue Elephant, for instance, was manufactured in very limited quantities, likely fewer than 5,000 shipped, before the color was changed to a light blue.”

“Some of them (can be valuable) with certain factors in place … so, (the) condition is excellent, hasn’t been used, touched, played with, certain tags, certain materials have been used … they might be worth into the thousands or tens of thousands, yes,” notes Verderame. “But this million dollar stuff, I have not seen a credible sales record to support that.”

A piece of history 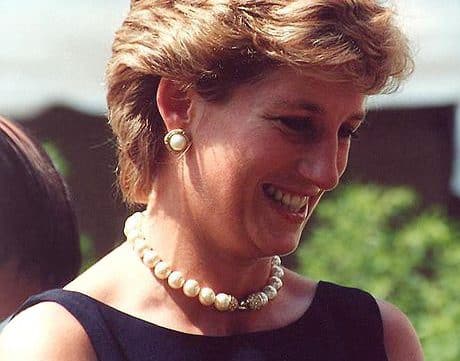 As August 2022 draws closer, we are approaching the 25th anniversary of Princess Diana’s death. As we see a surge in content and nostalgia surrounding the People’s Princess, experts predict that interest in Di memorabilia – including this Beanie Baby – will increase.

Therefore, if you are the owner of a rarer Princess the Bear, this summer may well be the best time in years to put it on the market. But as for buyers, beware of the hype – and the apparent eBay prices.

“People can ask for whatever [amount] they want—it’s what the thing actually sells for that is the market value,” appraisal expert Judith Katz-Schwartz has noted. 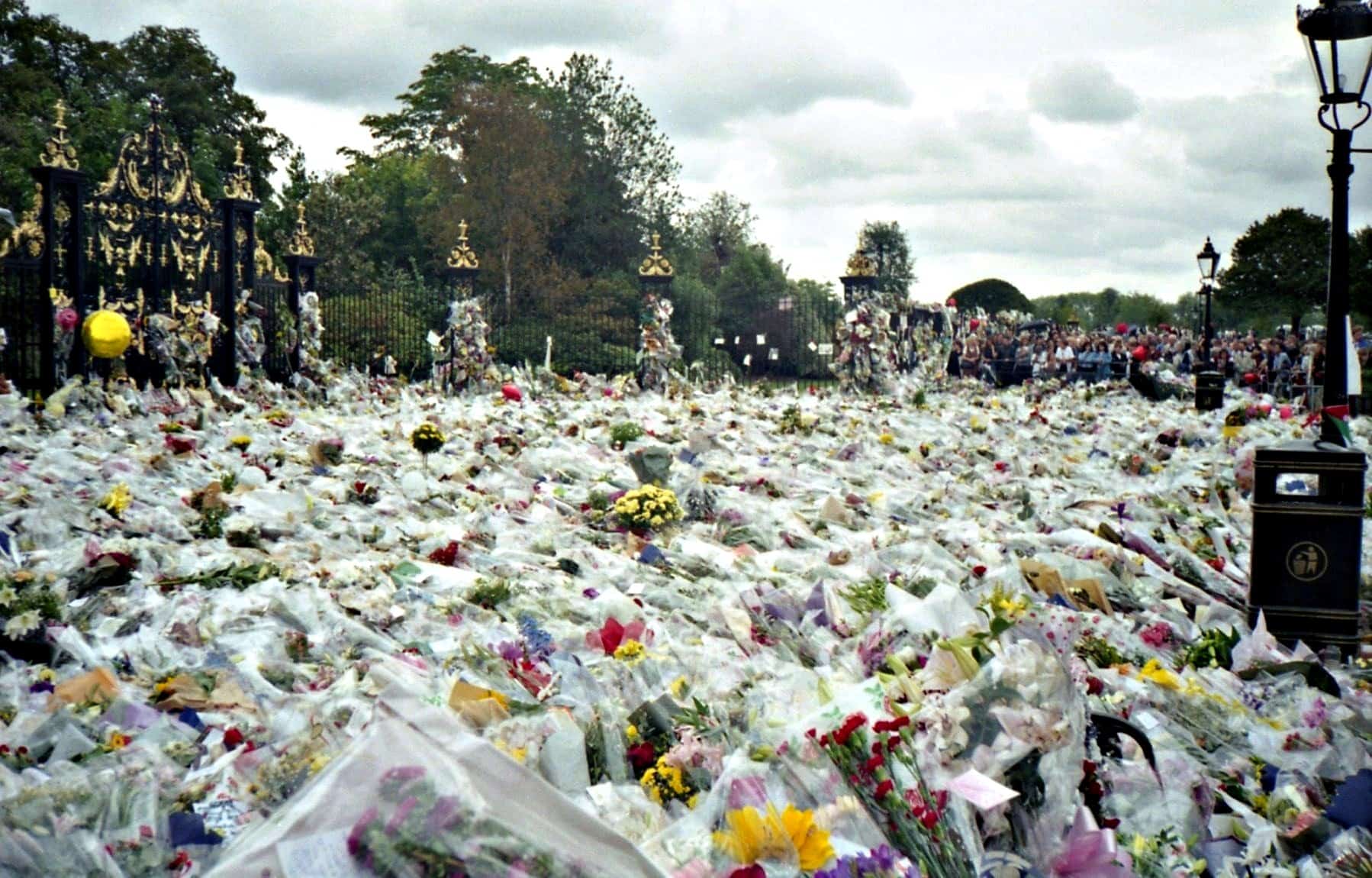 While many sellers declare the rarity of Princess the Bear toys, the sheer number of those on sale belies this promise. On eBay alone, a search for ‘Princess Diana Beanie Babies’ will return over 300 offerings.

As articles about Diana (and Diana memorabilia) abound in the coming months, it’s worth scrutinising any articles that place a six-figure price on the toys.

The website Tycollector.com notes that in 2015, the tabloid media reported misleadingly about the value of Princess the Bear, potentially causing some fans to invest huge sums of money in the toys. 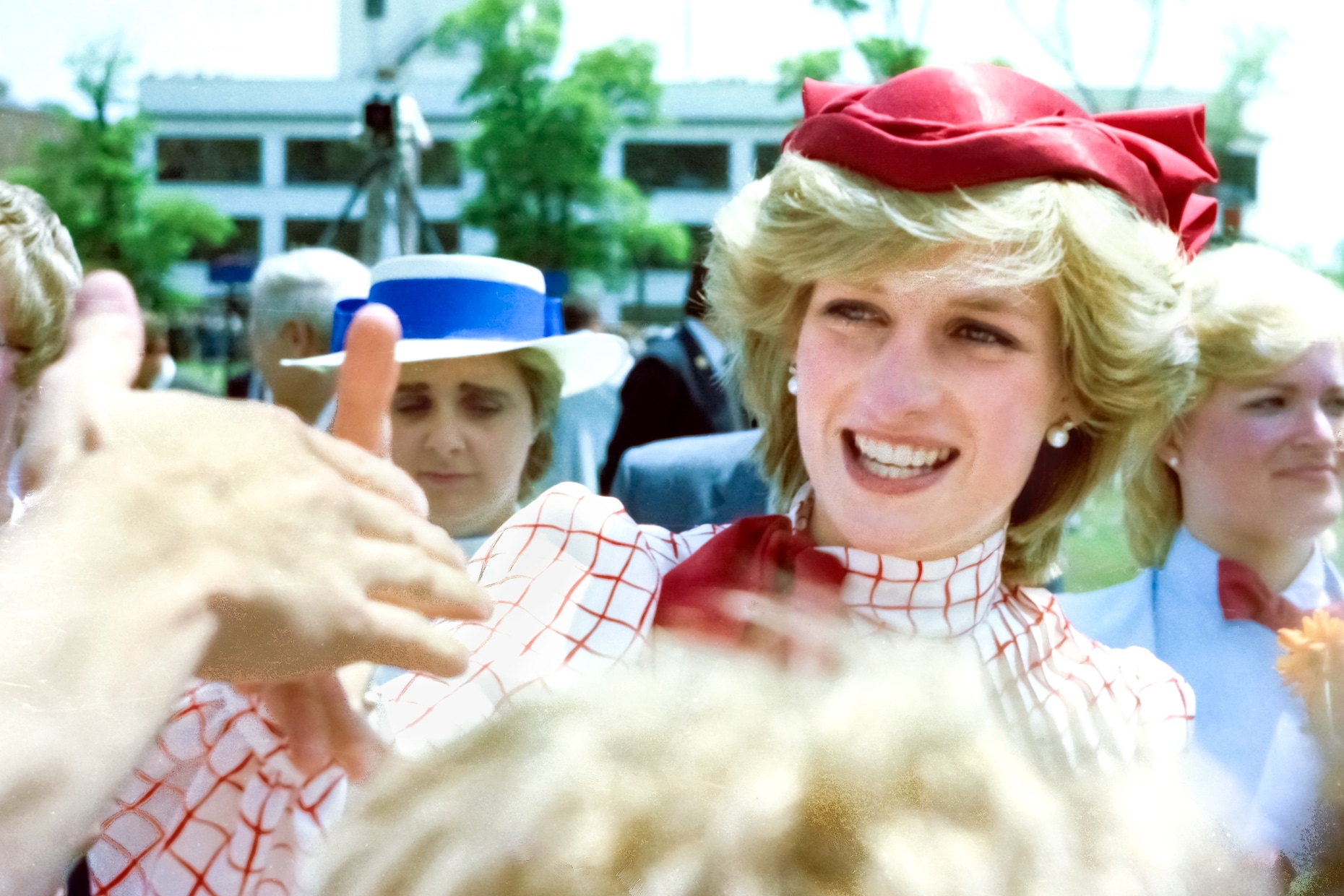 “We are truly sad so many peoples’ hopes were mistakenly raised by reading a fraudulent article that suggested they might own a rare and valuable Princess Beanie Baby,” the website states. “We feel even worse about amateur speculators who were tricked or motivated by the incorrect articles to pay atrociously high prices for Princess on eBay for the weeks following the publication of the misleading articles.”

“Prices being paid for Princess on eBay rose across the board for almost all versions due to the incorrect newspaper articles,” it elaborated. “The number of Princess Beanie Babies listed on eBay also rose by more than 40 percent after the articles were published, once again demonstrating that Princess is not ‘rare’.”

As a result, it’s probably best not to view Princess the Bear as an investment – not to set your hopes especially high if you’re looking at selling. But so long as you aren’t purchasing this violet bear at extortionate prices, we still think you can get plenty of nostalgic joy out of it. We have no doubt that it will transport you once more to the strange heydays of the 90s.