How Much A Peace Bear Beanie Baby Is Worth In 2022

No fad defined the 90s the way that Beanie Babies did. First launched in 1993, it didn’t take long for the huggable teddies to go from adorable companions to cute collectables to a must-have obsession. Of course, like all flavour-of-the-week trends, they eventually fell out of favour, and with their popularity went their resale value.

Select Beanie Babies, however, are today able to fetch huge prices when sold to dedicated collectors, fuelled by a mix of 90s nostalgia and the natural increase in value that comes with age. One of these highly-coveted bears is Peace, a 1997 bear with a unique design that has occasionally sold for up to $5,000. eBay sellers regularly list Peace the Bear for between $1,000 and $2,500, but collectors put its real value in 2022 between $10 and $200, depending on print errors, physical characteristics and wear and tear.

So why is there such a big discrepancy between the prices sellers are encouraged to sell this multi-coloured Beanie Baby for, and the value collectors say it actually has? And why are people so excited about Peace the Bear in general? Hold on to your beans, we’re unpacking the hype around this extra-special bear. 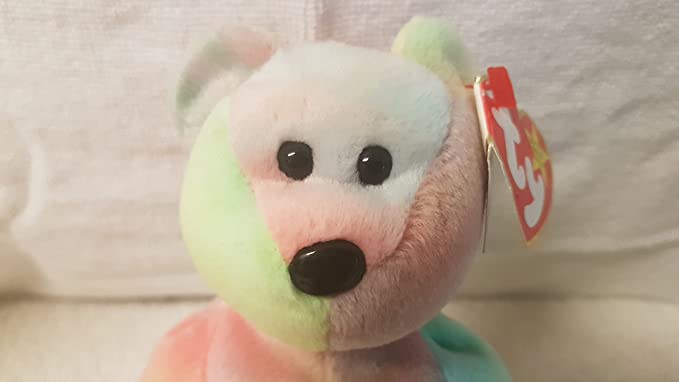 Peace the Bear was designed and created in 1996, though wasn’t officially released until February 1997. Peace has a hippie-inspired, tie-dye design as well as a peace sign embroidered on the chest, and is the natural successor to Garcia the Bear.

Garcia was the first tie-dye (or ‘Ty-Dye’) bear, released in January 1996 and retired in May 1997, and came minus the peace symbol. Garcia is said to be named after Grateful Dead vocalist and rock and roll legend Jerry Garcia, who passed away in 1995 at the age of 53.

Peace the Bear’s psychedelic tie-dye fur is a big reason why it has remained so popular among collectors, as it means it’s one of very few Beanie Babies where no two look exactly alike. Peace was also discontinued in 1999, giving it a short production run. As a result, with fewer created and sold, Peace’s relative scarcity contributes to higher desirability amongst Beanie Baby enthusiasts. 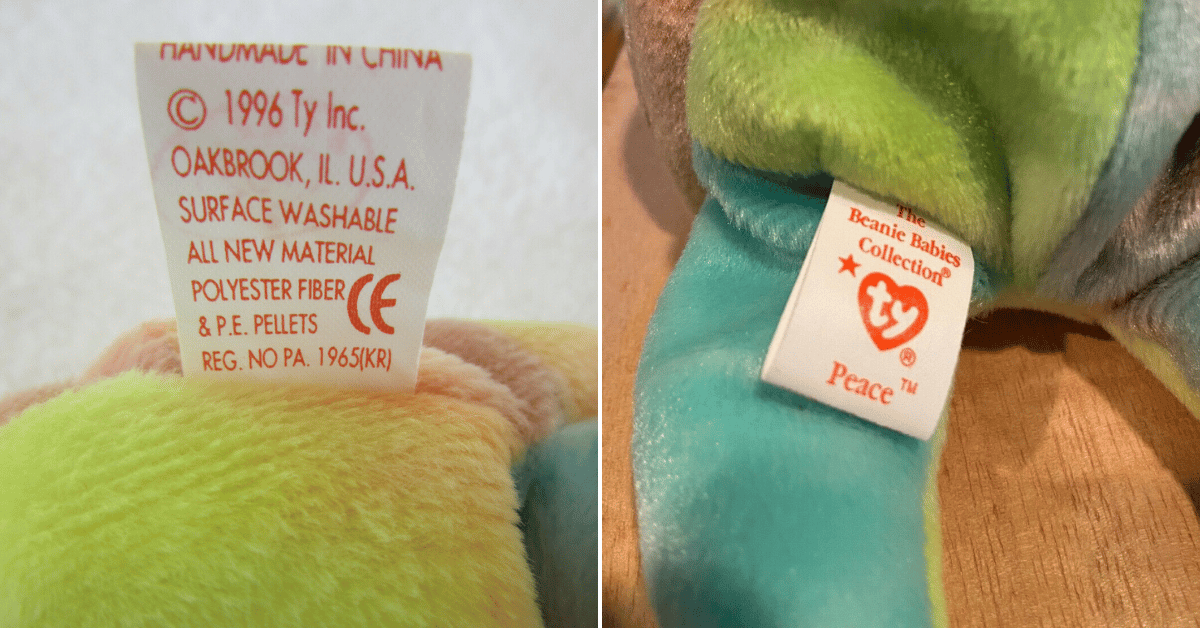 Peace the bear’s print run being between 1997 and 1999 is also intriguing to collectors for reasons other than scarcity. Especially between 1996 and 1998, numerous print errors on both the ear tag and tush tag went uncorrected for a limited time, leading to a small number of bears that have both unique colouring and text mistakes.

Some ear tags from this era have misspellings of both surface (‘suface’) and original (‘origiinal’), which can up the value of your bear. It’s also worth checking whether the ear and tush tag reads ‘Made in China’ or ‘Made in Indonesia’, as Indonesian-made Beanie Babies from this time period are often worth more, due to their signature beans being made from rare and discontinued PVC pellets rather than PE pellets. 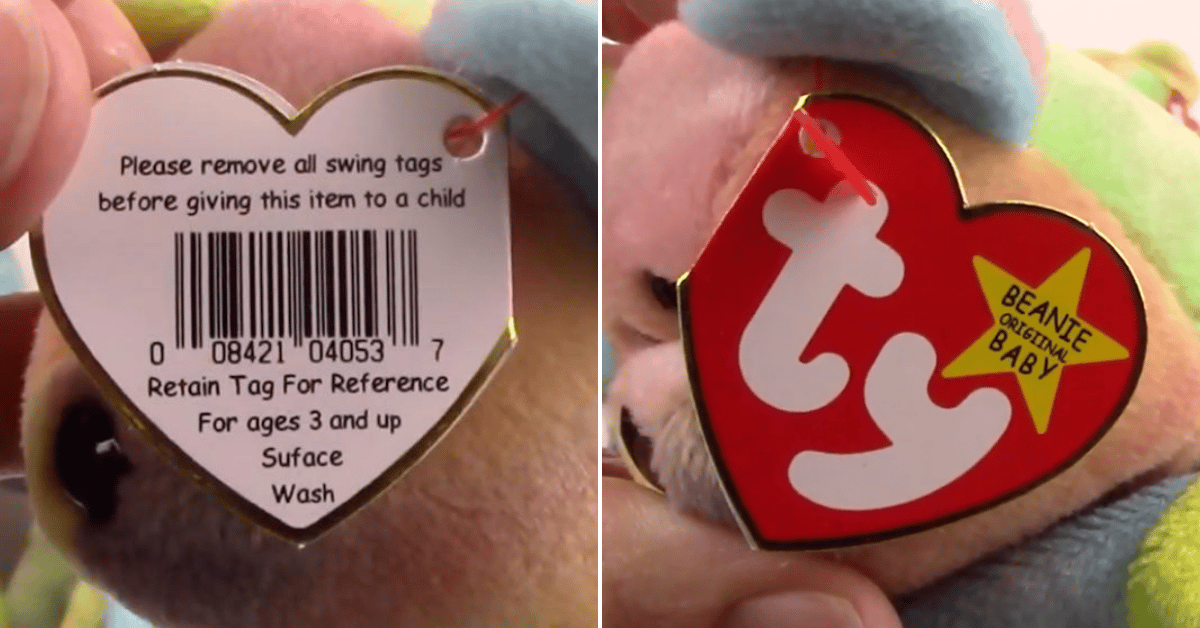 Print errors and manufacturing country can pull the value of a Peace the Bear up from $5 to around $35, but the price increases further mostly due to visual details. Inside the tush tag, most Peace bears have a printed number, with 108 or 113 curiously being the most valuable to collectors, despite 107 and 114 actually being the rarest. When in combination with good colouring, a 108 or 113 bear can sell for $35.

However, the biggest determiner when it comes to the value of a Peace the Bear is the presence, or lack thereof, of the peace sign. When combined with highly desirable colours, a Peace the Bear with no embroidered peace sign is worth at least $100, and can even sell for $200 if it is authenticated and without any visible wear and tear. As for prized colours: on the whole, neon bears tend to be worth more than pastel bears, with pastel bears starting at $5 on the resale market, while neon bears start at $15. 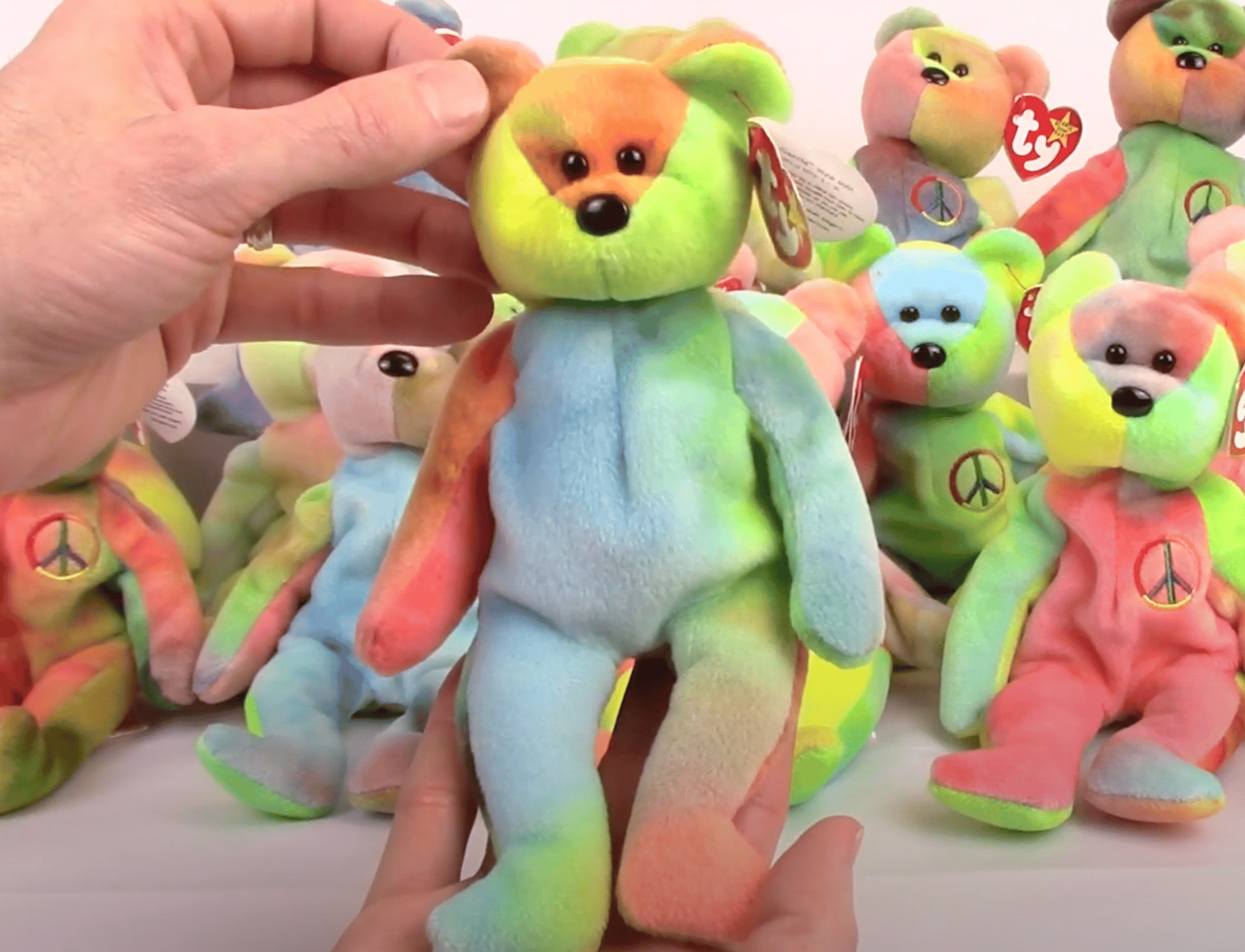 Of course, the coolest thing about the Peace bear Beanie Babies is that their tie-dye design means that no two bears are exactly like each other. As such, there’s the potential for cool colour glitches like pyjamas, where the bear is one solid colour from their neck to their toes. While blue pyjama bears have historically been the most valuable, in recent years yellow pyjamas have also been highly sought after by collectors.

The other most desirable quality in a Peace bear is a tri-colour face, where the bear’s face is made up of three drastically different colours. While neither a pyjama bear nor a tricolour bear will fetch huge prices by themselves, these visual qualities have a stackable effect, making a bear more valuable when combined with an Indonesian tag, a missing embroidered peace sign, a valuable stamp number, or print tag errors. 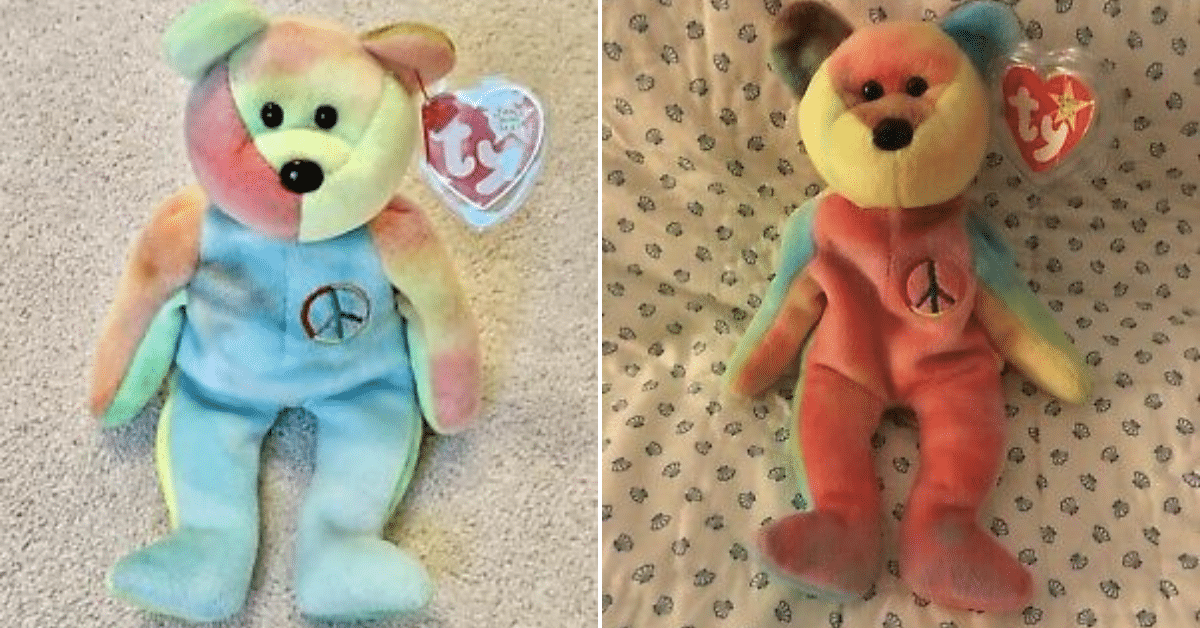 eBay is full of Peace the Bears that sellers claim to be from 1996, with tag print errors and Indonesian-made PVC filling. These bears often have a starting price of $650, but can go all the way up to $3,200. However, there are just as many bears with similar qualities that are listed between $5 and $10, which is closer to the value that Beanie Baby experts give it. Why?

Well, some listings may be attempting to take advantage of Beanie collector newbies, who think they can flog Peace the Bear for an even more inflated price. However, some experts have also suggested that mammoth sums for Beanie Babies may be fake listings, designed to launder money or pay for illicit substances without arousing suspicion. 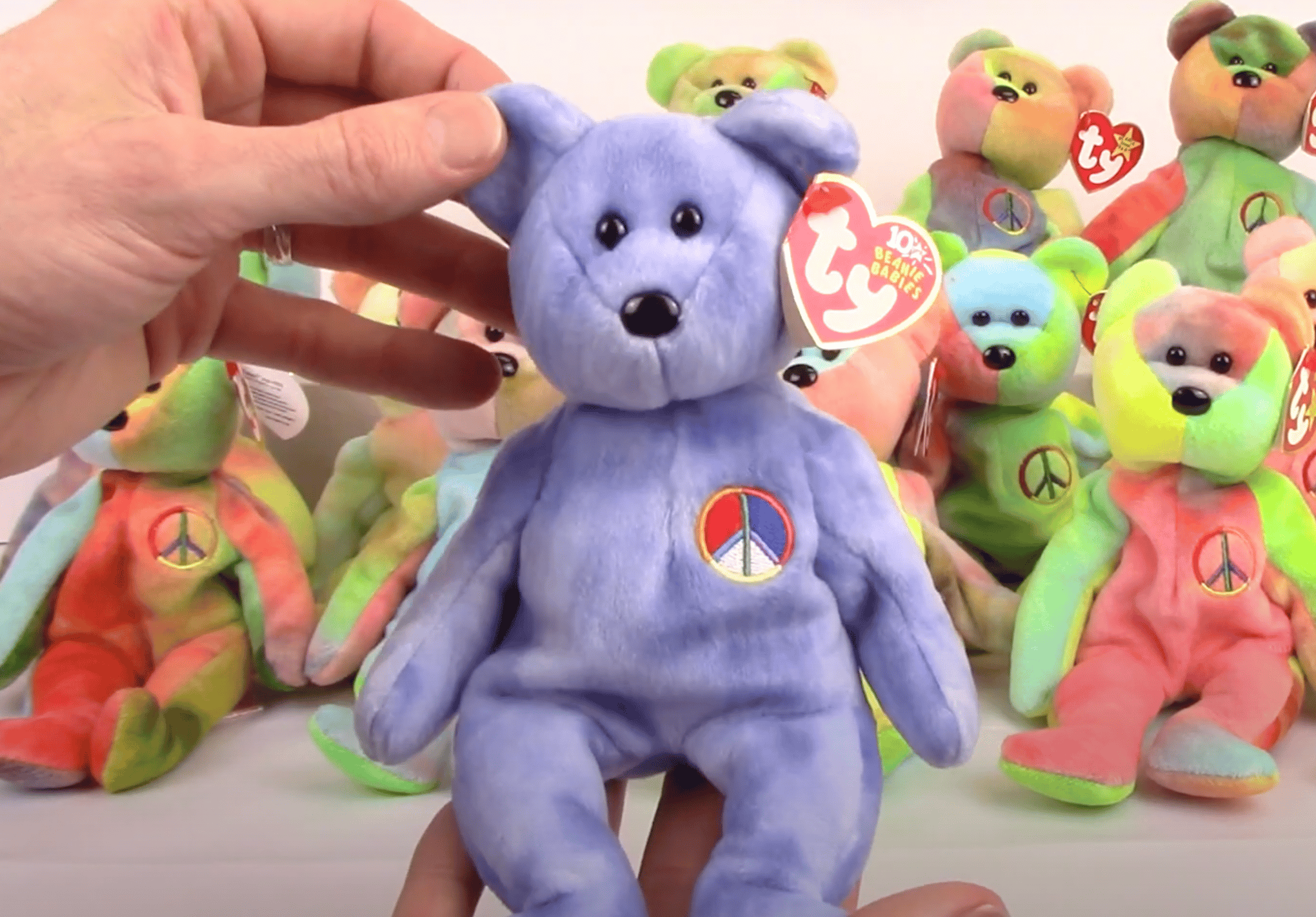 Peace the Bear was retired in 1999, and it took four years for a redesign to hit the shelves. In 2003, an updated Peace was released to the public, with no tie-dye design, royal blue fur and a smaller peace symbol, shifted to the side of his chest rather than in the centre. On the whole, royal blue Peace the Bears are far more common, and thus less valuable.

So whether you’re looking to sell your old Peace or add one to your cuddly collection, the important thing is to do your research, and regard hugely inflated eBay listings with suspicion at all costs.