The Care Bears were every 80s girl’s favourite toy line. The soft toys were originally created by an American greetings card company, American Greetings, in 1981. Then in 1982, the entire Care Bears franchise was launched in New York City and soon became one of the most popular toys in America. There was a TV series, books, toys and even clothing based around the Care Bears.

Each Care Bears plush toy was cuddly and featured a tummy symbol or ‘belly badge’ – usually a picture or symbol of their own unique character. Between 1983 and 1987 over forty million Care Bears were sold, with the company reaping over two billion dollars. Today, we’re listing the names of all of the original care bears to get your nostalgia juices flowing. 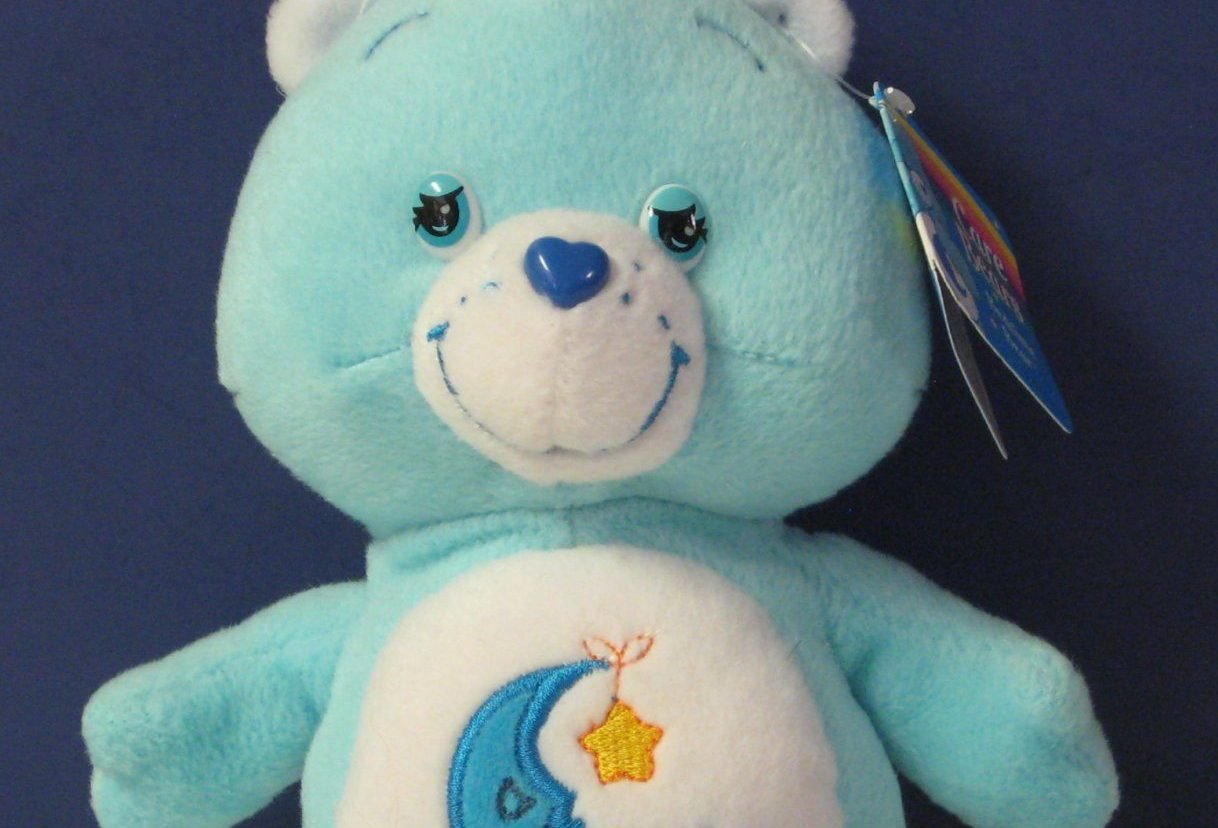 Bedtime Bear is a male bear. He’s always very sleepy and often talks with a yawning, sleepy voice. He likes to help everyone get a good night’s sleep, and wishes everyone sweet dreams.

He has aqua blue fur and his belly badge is a blue moon with a star. 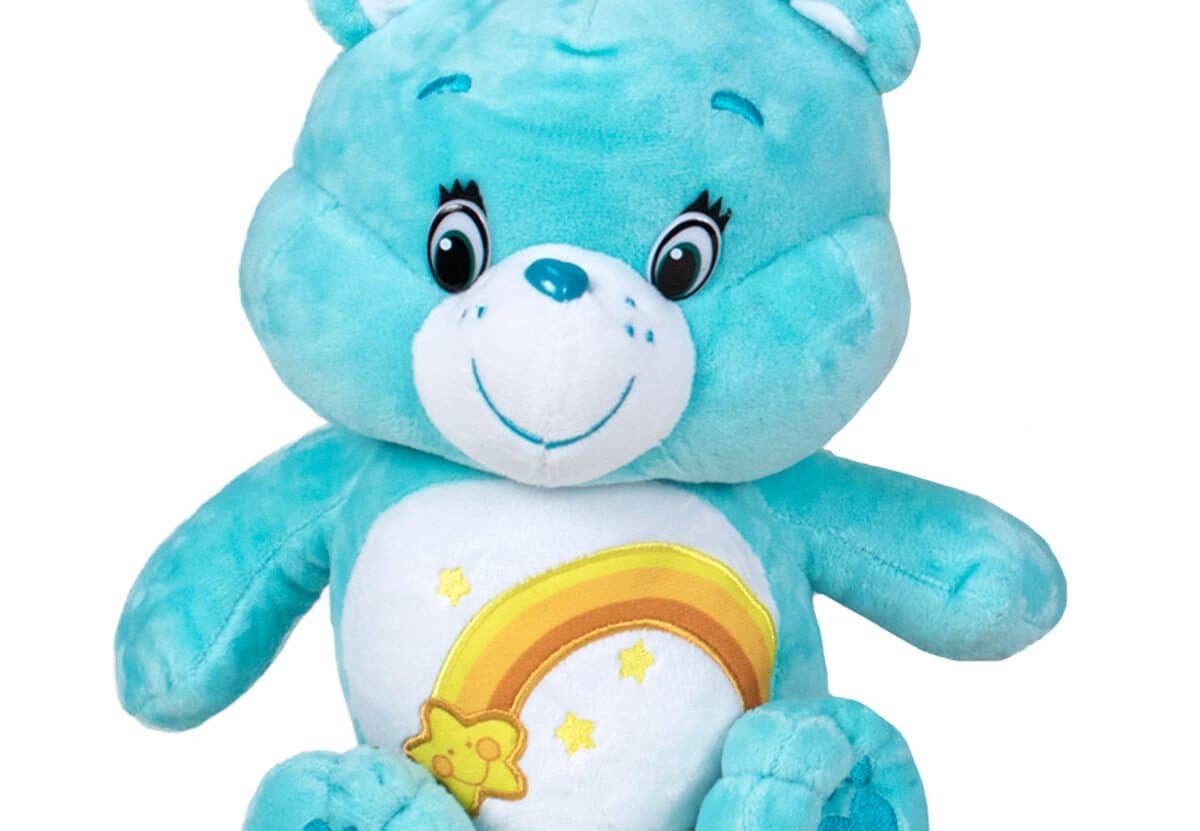 This light teal bear, with a shooting star symbol on its belly badge, is actually a girl. She likes to help make everyone’s wishes come true. She also has to make it clear that sometimes the only way to make your wishes come true is by hard work.

Her best friend is a wishing star called Twinkler. 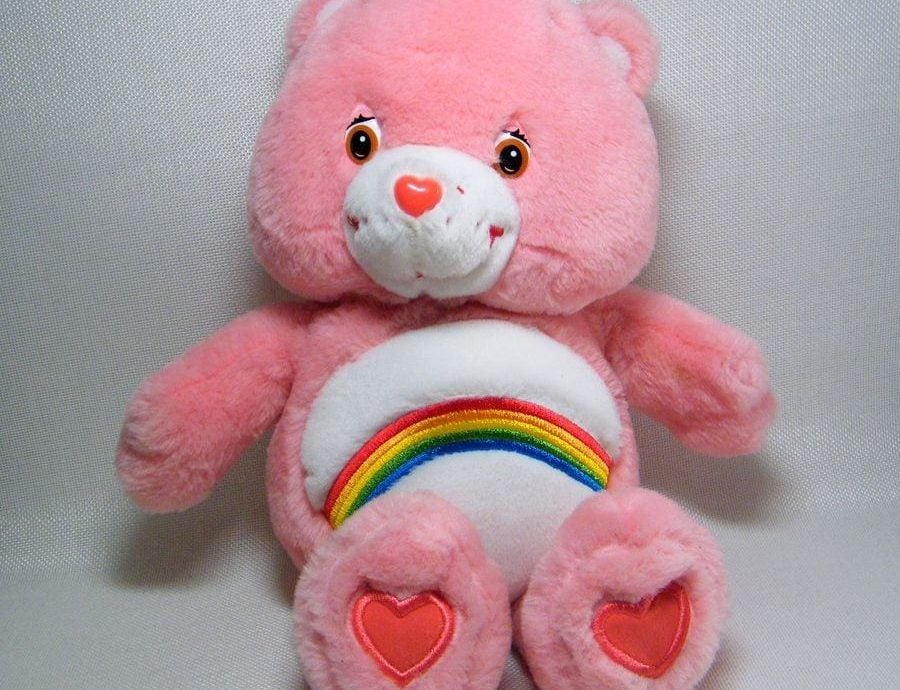 This girl is one very happy, jolly bear. If somebody is feeling down Cheer Bear will help to try and cheer them up.

She is carnation pink with a rainbow symbol on her tummy. 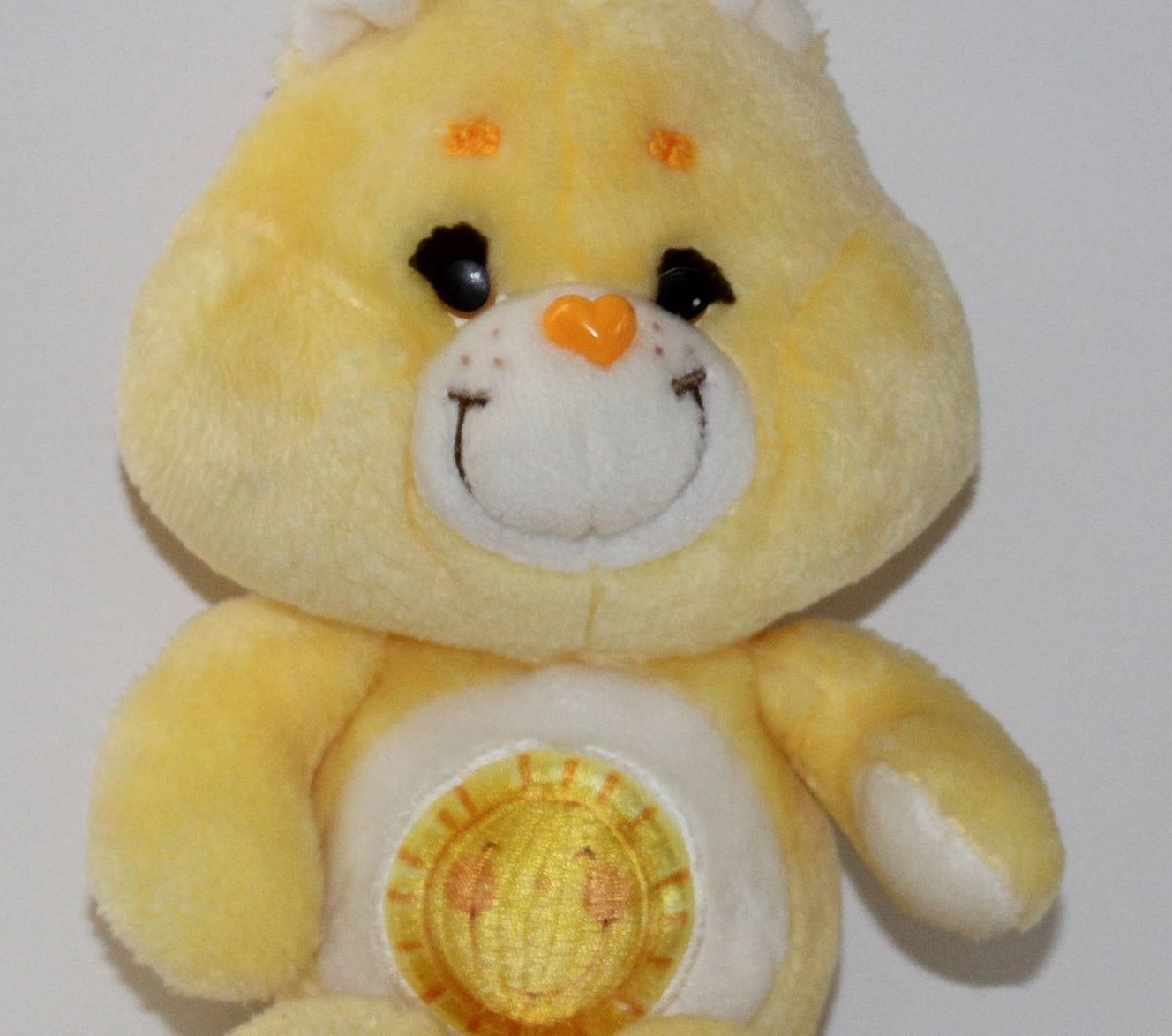 This yellow, furry bear wants everybody to have a happy birthday. Birthday Bear just loves to play games, and he goes to lots of parties.

He has a pink cupcake as his belly badge. 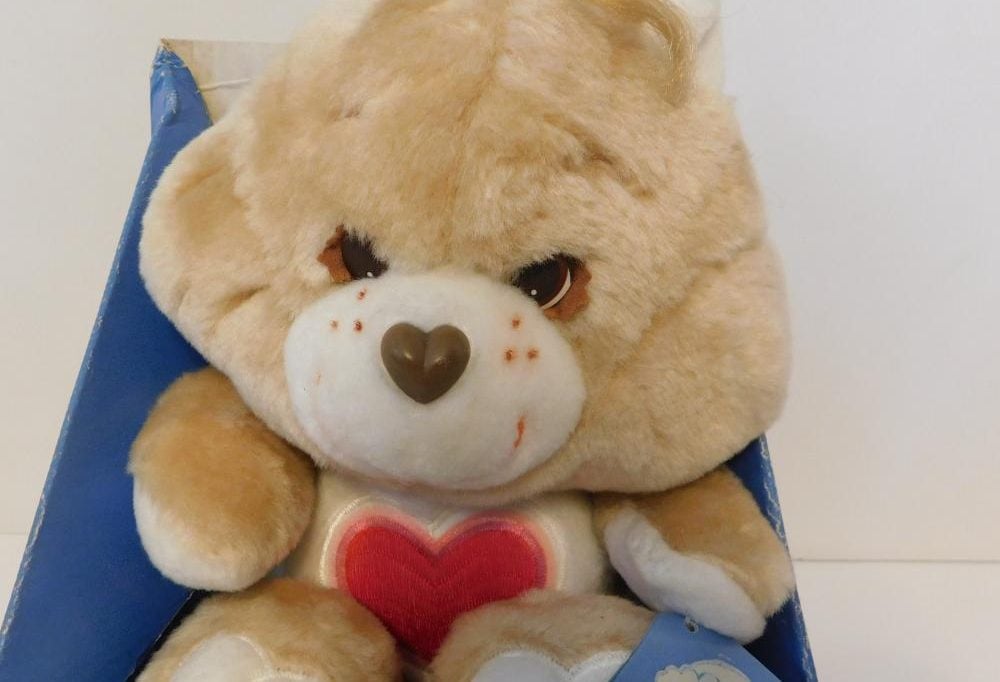 Tenderheart is a male bear, who was often thought of as the face of the franchise. In the 1980s Care Bear films he was the leader of the other bears too. His original colour is brown, but later on he became orange. On his belly is a big red heart. He is also sometimes considered as the ‘evil-looking bear, with his cute but frowning eyes.

Tenderheart Bear likes to help others show and express their feelings, and always encourages people to be as caring as possible. 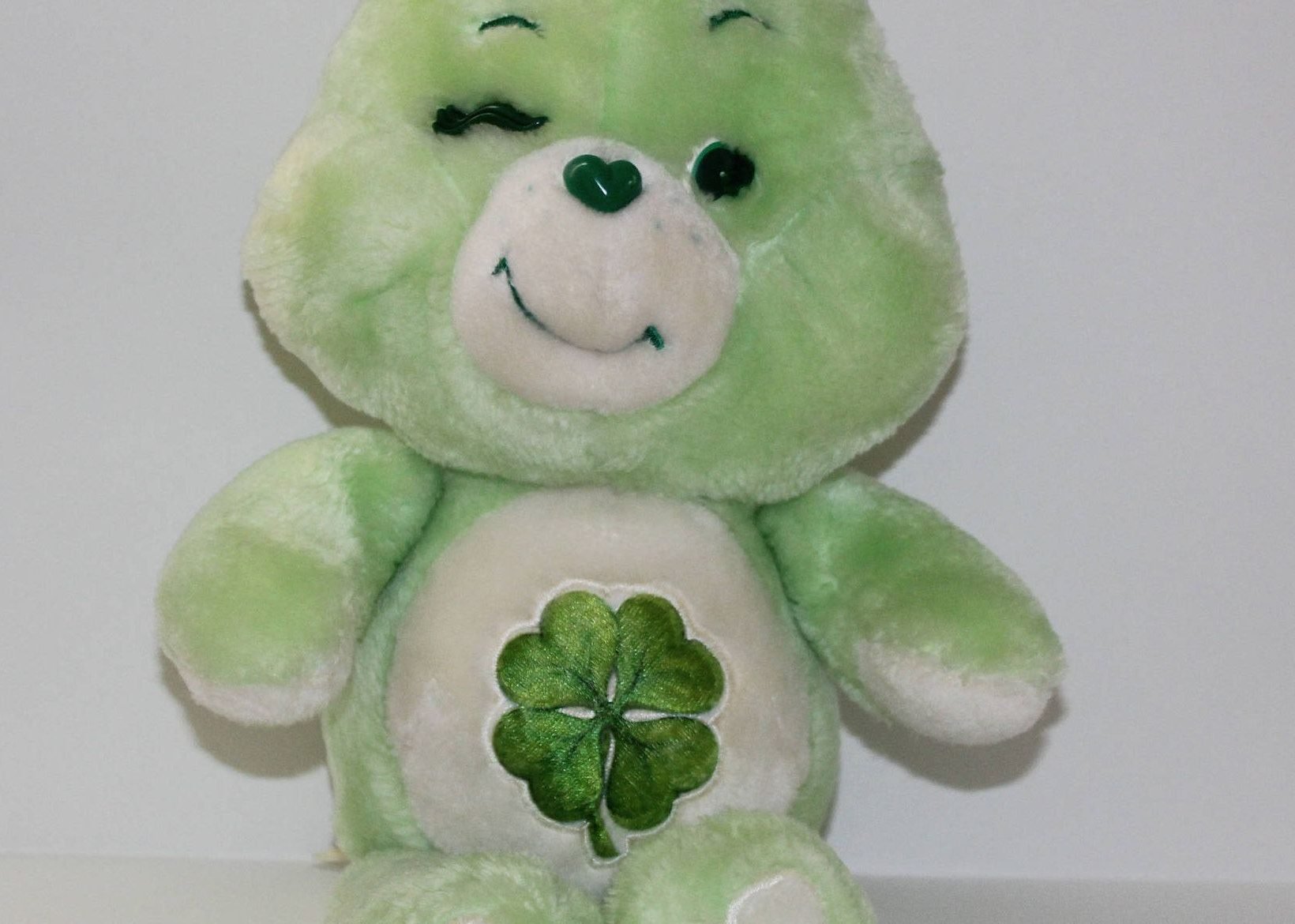 This male bear likes to spread good luck wherever he goes. With his green fur and lucky green leaf clover as his belly badge, he tries to bring luck to everybody. In his first appearance on the TV programme, he spoke with an Irish accent.

This later changed to an American accent, before reverting back to an Irish one again! Maybe we should call him Confused Bear… 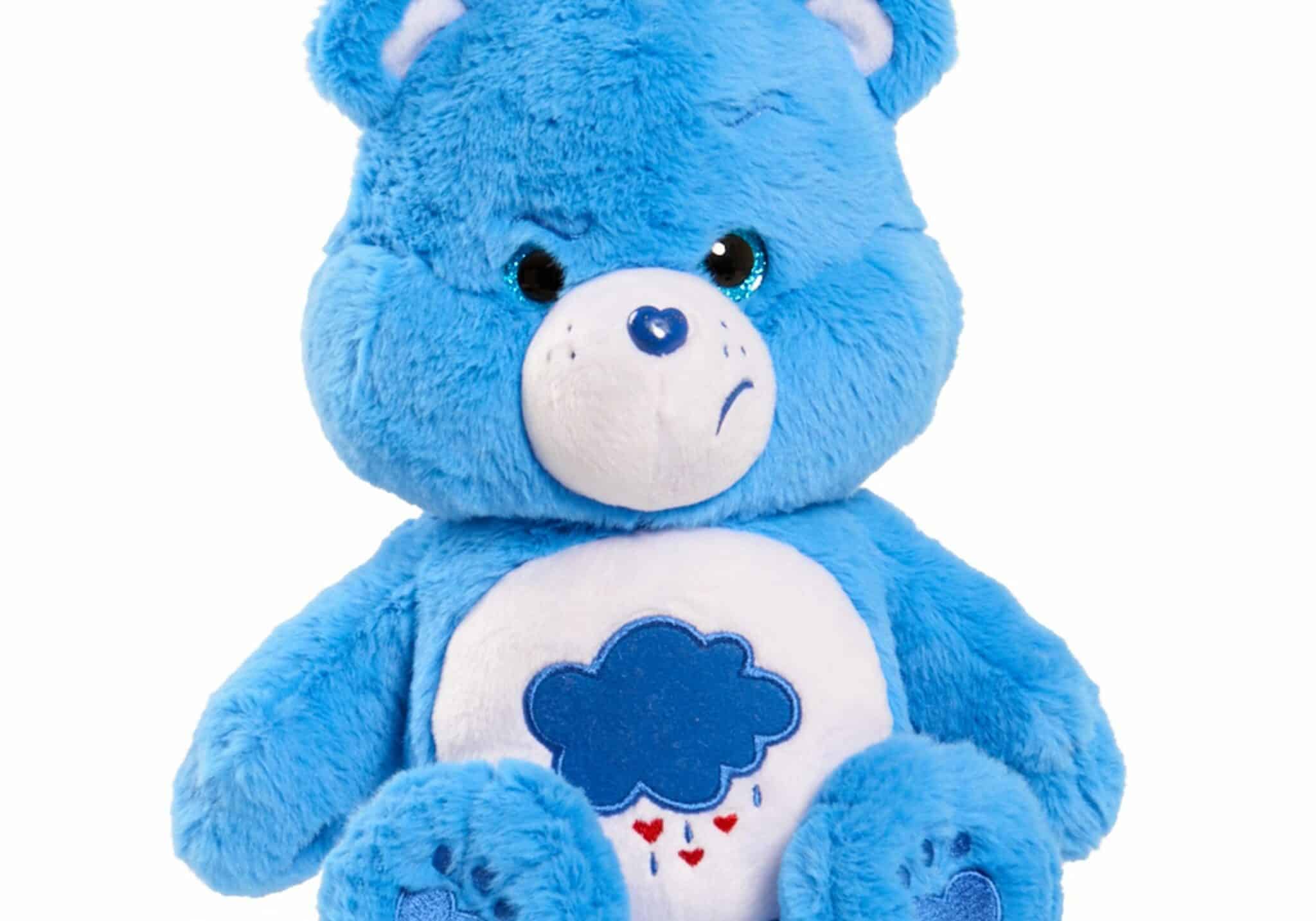 Naturally, this bear is a man! He has indigo blue fur and a huge rain cloud on his belly. Grumpy Bear is rarely happy, but he teaches people that it’s ok to be grumpy from time to time – just don’t let your grumpiness go too far.

This cuddly male bear does truly value all of his friendships, and occasionally he smiles too! 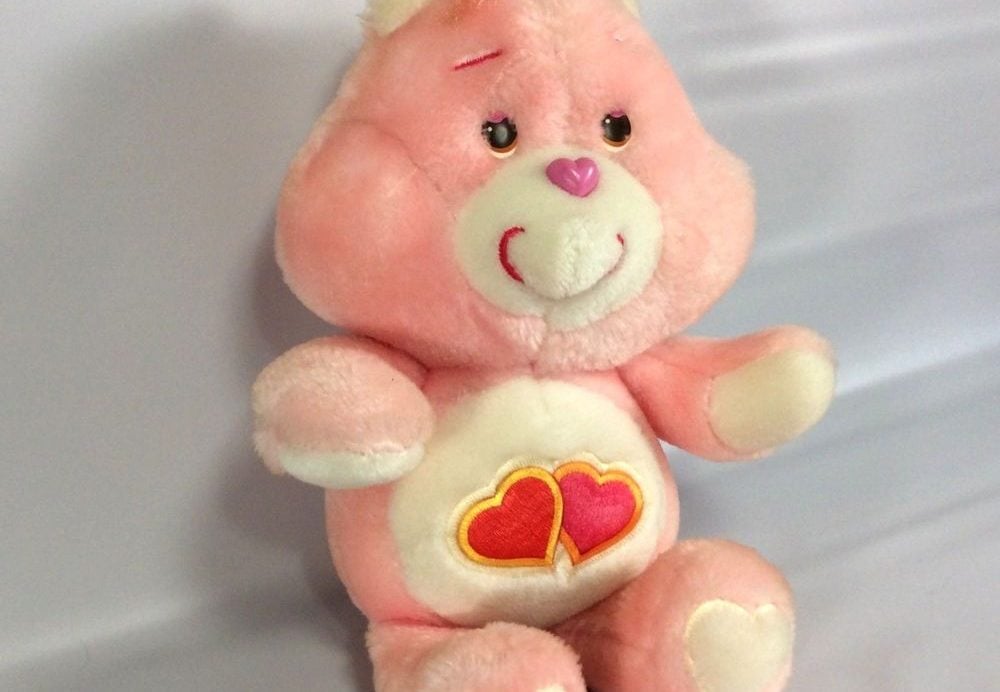 This female bear has magenta-pink fur and two hearts on her tummy. She loves to spread the love. If there is a way that helps to spread love, Love-A-Lot Bear will do it! 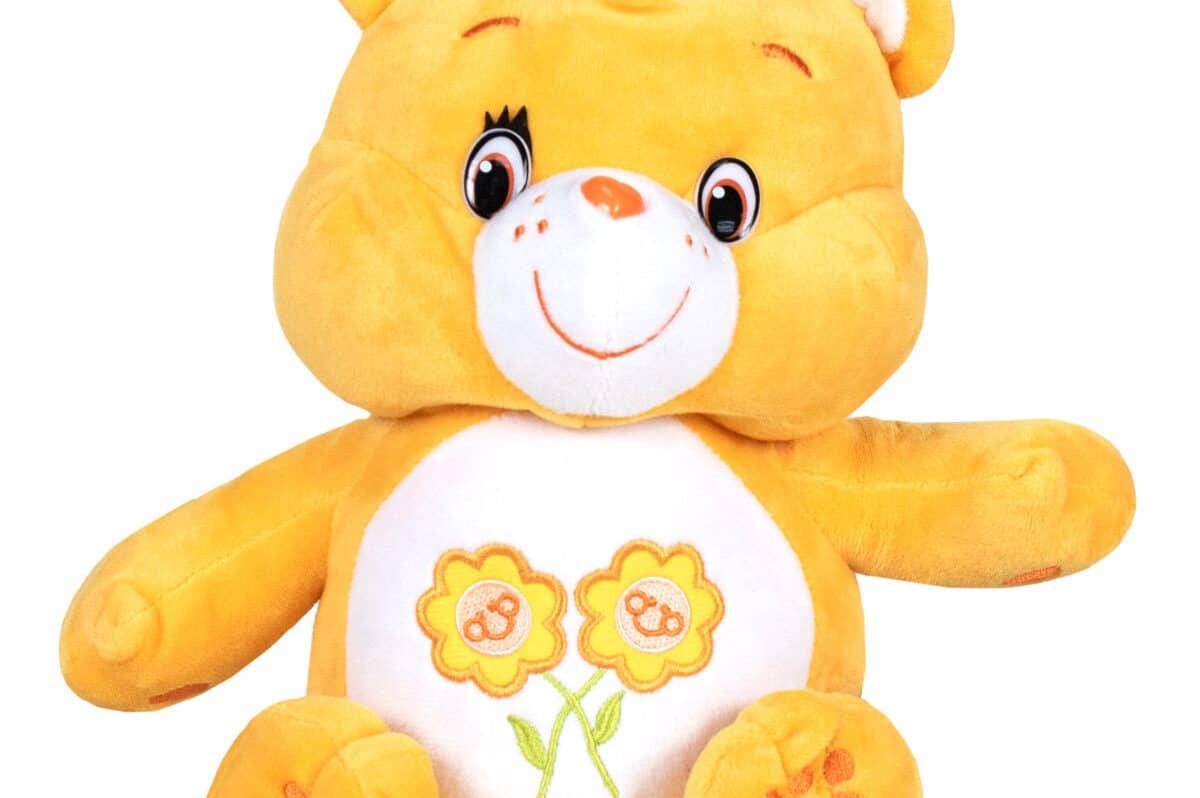 She is an extremely kind, friendly bear with light orange fur and two smiling sunflowers on her belly.

Friend Bear likes to show everyone the meaning of what a good friendship is. She also shows that the best way to make friends, and to be a friend, is by being yourself. 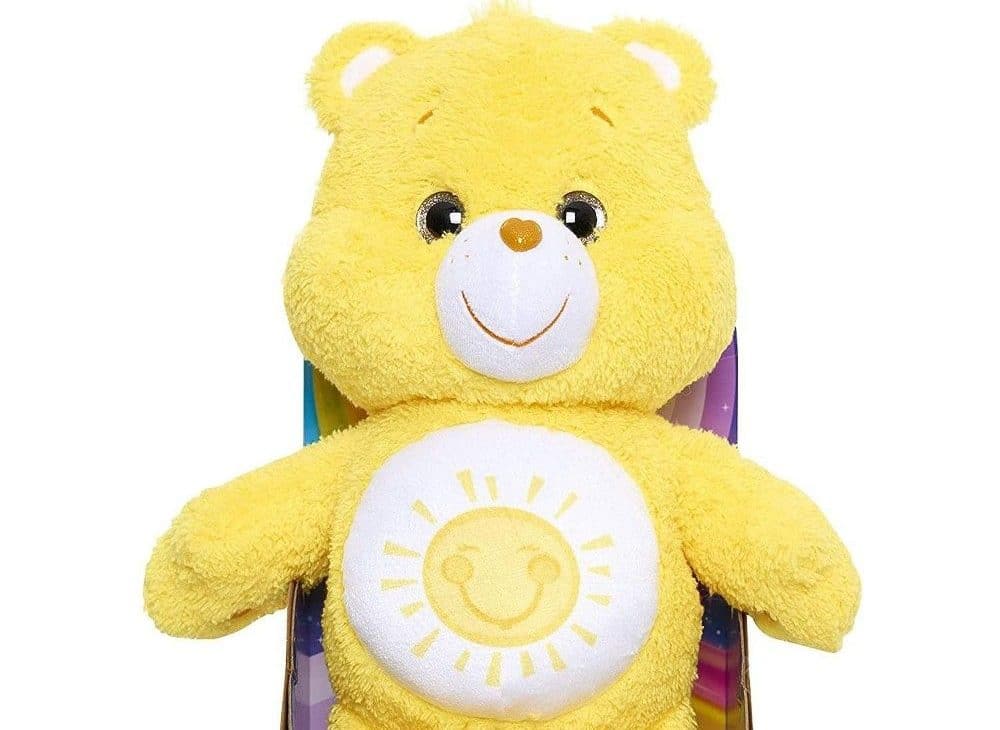 He loves to play, and especially loves telling jokes! He has yellow fur and a huge smiling sun on his tummy. This bear just loves to have fun! 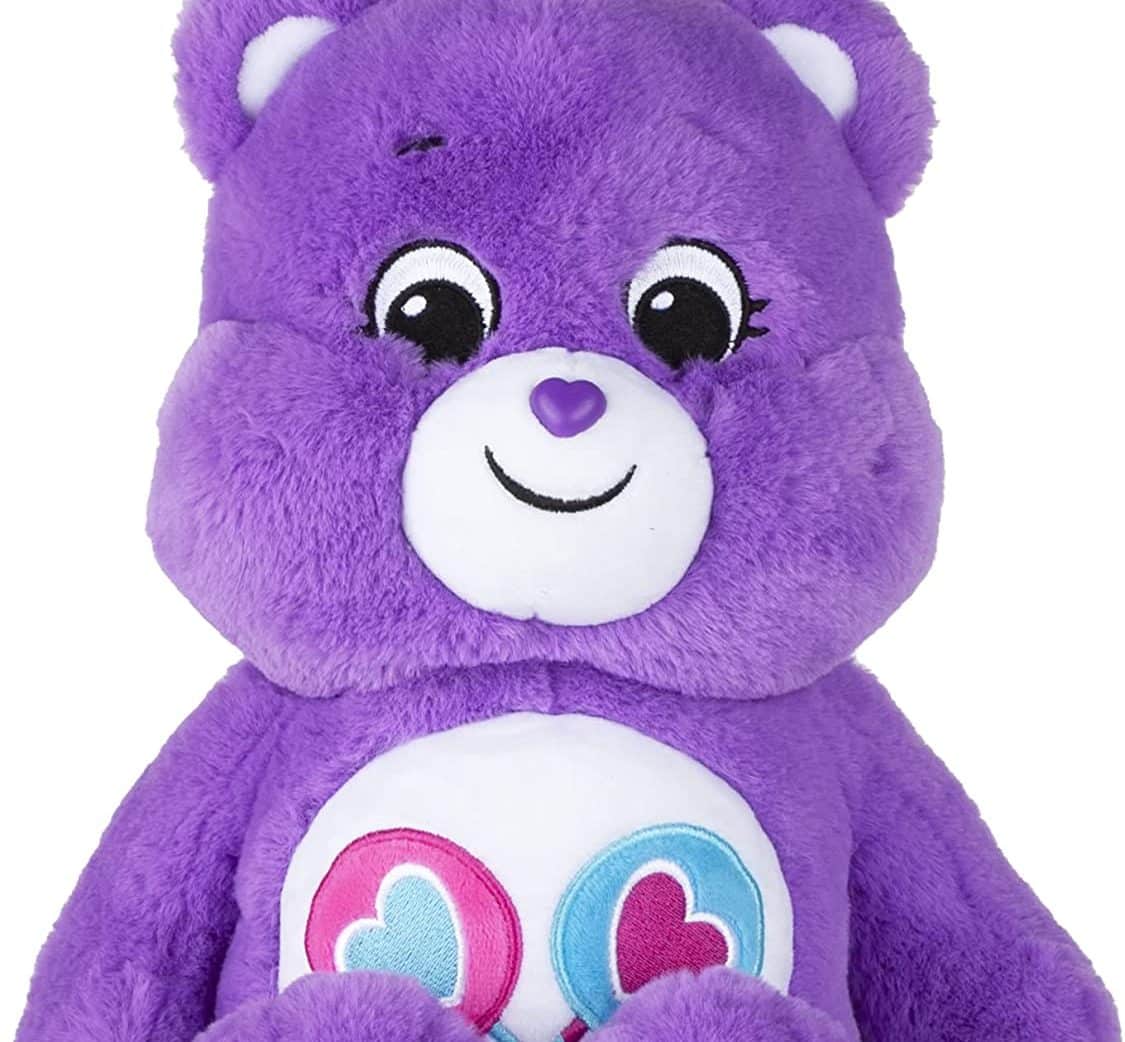 Share Bear was a later favourite amongst little girls in the 1980s. She was first introduced in 1985, making her debut in the 1985 film. As you can see, she has lavender fur. Share Bear loves to help everyone learn about the importance of not being selfish.

Originally, Share Bear had a belly badge of an ice cream soda with two straws, to symbolise how good it is to share. However the symbol was later changed to two lollipops, on the grounds that sharing the same soda can spread germs.