Stunt double to movie stars like Harrison Ford and Pierce Brosnan, Eddie Kidd became a hero in his own right back in December 1979. Aged only 20, this motorcycle daredevil took on perhaps the most iconic stunt of his career: he leapt over a broken railway bridge in Essex, clearing an astonishing 80-foot gap. Over 40 years later, we’re revisiting the tale of his unbelievable feat. 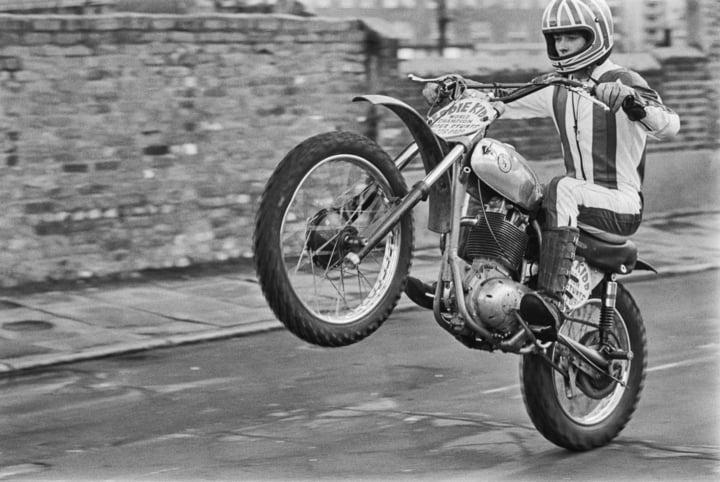 Born in 1959, Kidd was an adventurous lad from Islington, North London. His father Edward, who was a delivery driver and keen boxer, once took his son to see the 1971 movie Evel Knievel, which starred George Hamilton as the world-famous stunt performer.

The young Kidd was hooked – he told his dad, “I’m going to be the best stunt man in the world.” Before long, Eddie was lining up his schoolmates like sardines so that he could leap over them with his bicycle.

Sensing that his son would soon outgrow pedal-driven antics, Edward encouraged Eddie to train with a local motorbike stunt group. Something of a prodigy, Eddie was clearing double-decker buses by the age of 15. He triumphed in the junior world records with a leap over eight buses.

On one occasion, Eddie crashed into Edward himself during training, breaking his collarbone. The good-natured Edward told him, “Son, don’t crash again” – and Eddie never did, although an accident would one day change the stuntman’s life forever. 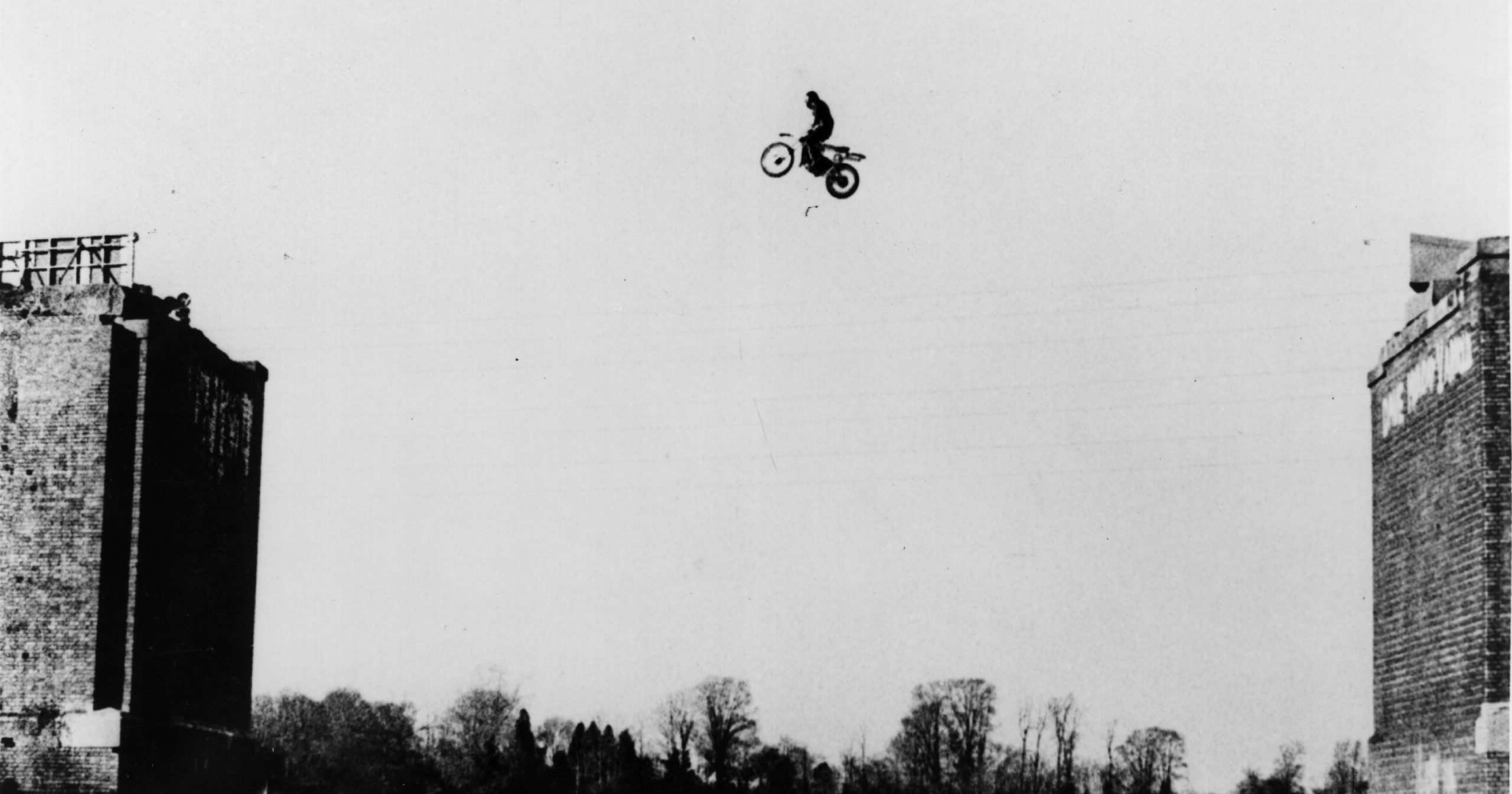 To make his mark on the world of stunt performance, Eddie Kidd needed to do something spectacular. When he was cast in the drama Riding High, playing a frustrated young biker, the 20-year-old found the perfect opportunity.

During filming, he prepared to perform a motorbike jump over the Blackwater River in Essex. He chose a disused viaduct for his starting and landing points, with an 80-foot gap between them and a deathly drop below.

The jump took place on 10th December, with a crowd of motorbike fans – plus both of Kidd’s parents – watching alongside the film crew. Kidd broke 100 miles per hour before jumping across the gulf on his 400cc Yamaha.

High winds made this leap particularly risky, but Kidd pulled it off in style, landing the bike at a near-vertical angle. “They asked me to do the jump at the end of the film because they where worried,” he would later tell the BBC, which reported on the jump that day.

“It had been raining a few days before and they insisted that I have a mud guard on the front of my bike,” Kidd noted. “But while in flight the wind caught the mud guard and over balanced the bike, so the landing was not easy.”

“I was also told to wear a visor on my helmet, which blew backwards as I was landing, but I nailed it,” he added.  However, Kidd didn’t emerge completely unscathed from this death-defying jump – his uneven landing gave him a minor leg injury.

No stranger to showmanship, Kidd quoted a Sinatra classic to the BBC before the jump: “I did it my way.” Afterwards, though, he seemed shaken by the experience, with less of his earlier bravado. “No mistakes. I never want to do a jump like that again,” he commented straight afterwards. Speaking for the cameras, Kidd’s parents said how proud they were, but also expressed their relief that the stunt was over.

‘I became bigger than my hero’ 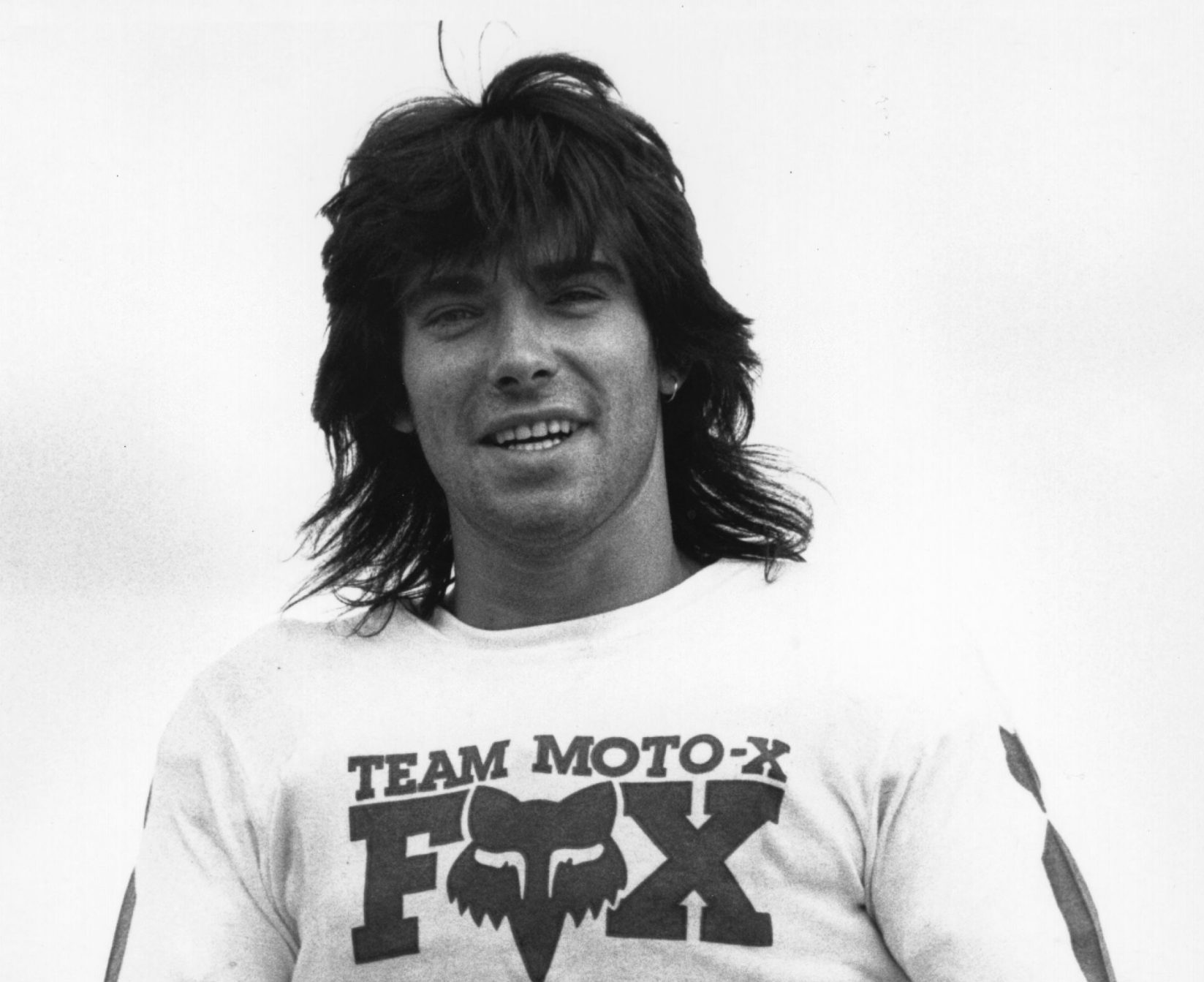 The Blackwater jump won Eddie Kidd international fame. Offers for movie stunt work came swooping down on the young star, and he became a body double for Val Kilmer, Michael Caine and Roger Moore among other Hollywood legends.

As Kidd himself would later put it, “I became bigger than my hero Evel Knievel, became a world champion stunt rider, stunt double to numerous Bonds – yep, I made James Bond look good – and I jumped the Great Wall of China.” As his popularity skyrocketed, Kidd started modelling for Levi’s and even had his own computer game, named the Eddie Kidd Jump Challenge, released in 1984. Over two decades, he released five records including 1981’s Heavy Metal. 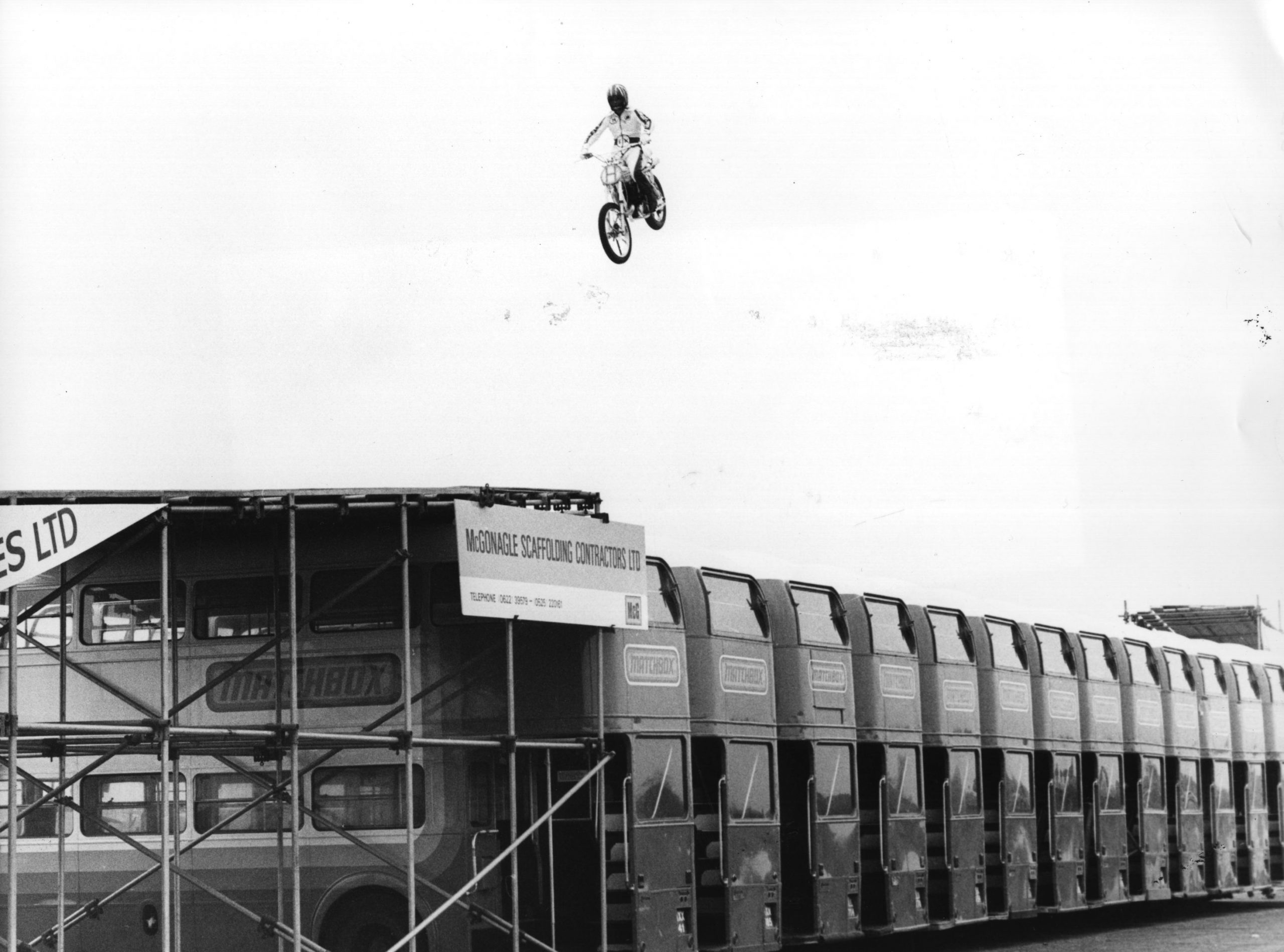 Kidd’s 1993 leap over the Great Wall of China proved hugely popular, and soon afterwards he defeated Evel Knievel’s son Robbie in the world title Motorcycle Jump Off. However, only three years later, Kidd suffered a devastating accident. At a Hell’s Angel rally in Warwickshire, Kidd intended to jump over a jet car in motion and land on a hilltop – a mere 50-foot leap.

On arrival, he found that the team hadn’t prepared scaffolding to keep him from falling upon his hill landing, and they hadn’t put out cardboard boxes to break any potential falls. This caused his eventual fall to be far more severe. Kidd later noted, “I never used to touch anything before jumping in case it impaired my judgment. But the night before the accident I took cocaine and I’d been drinking.”

During this infamous stunt, Kidd landed on the Warwickshire hilltop – but the landing was so hard, Kidd’s helmet knocked into his bike and sent him toppling down a 20-foot drop.

‘Everything tasted of strawberries’ 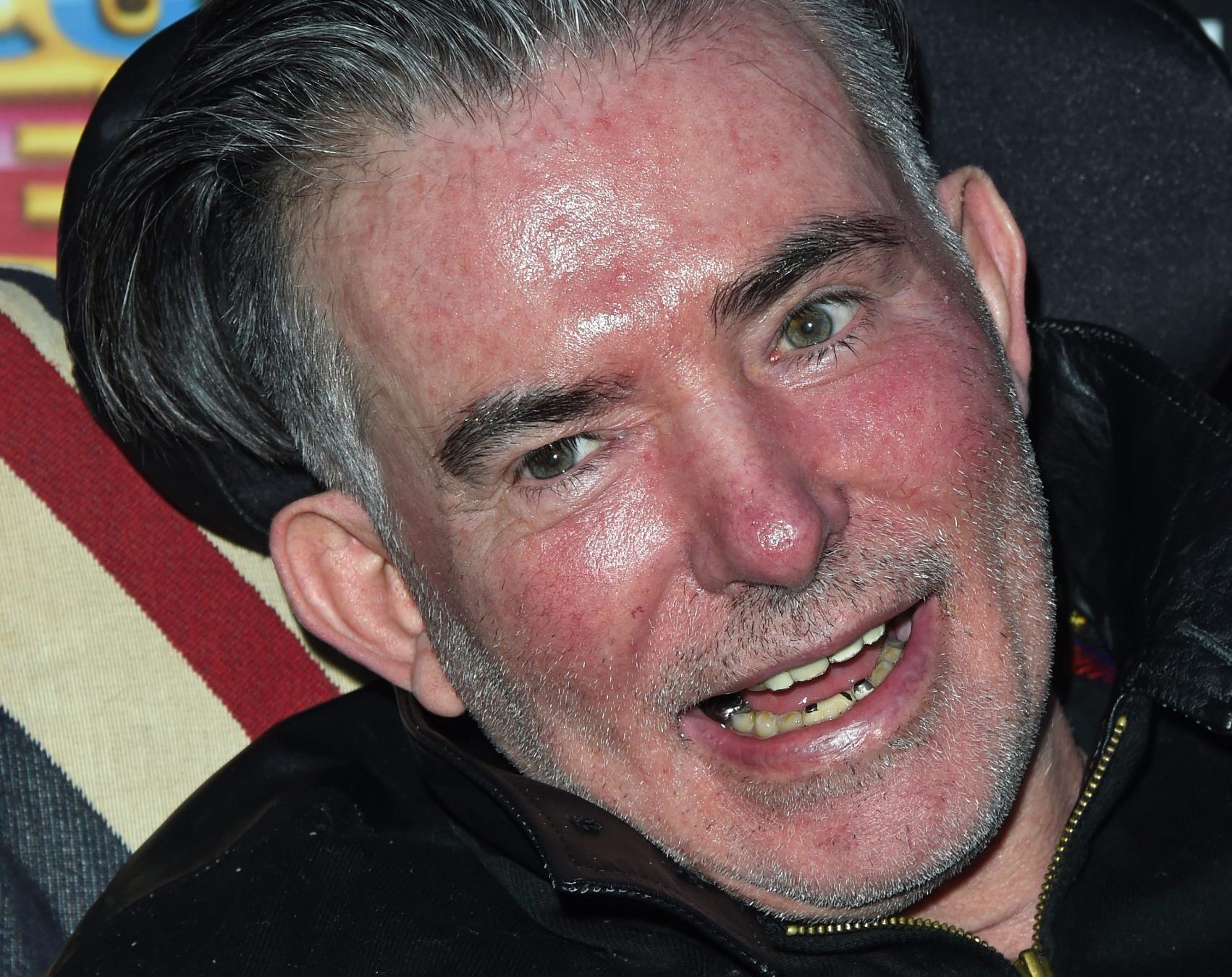 Kidd’s brain injuries from the Warwickshire accident were so severe that the star spent three months in a coma. He also broke his pelvis and collarbone and suffered a neck injury. Years of rehabilitation meant that Kidd’s life changed beyond recognition. “I had to learn how to do everything from scratch – to talk, to walk, to laugh, even to taste, and although not a bad thing, everything tasted of strawberries,” he has recalled. Elton John and Uri Geller were among the well-wishers to contact Kidd during his recovery.

In 2010, the Metro reported that Kidd had resorted to selling his motorbikes to raise money for his care. According to the newspaper, Kidd made plans to auction off two of the most famous bikes he rode: his Honda CR500 (which he rode over the Great Wall of China) and the Honda XR500 that he rode during his life-changing accident.

Kidd has won acclaim as a mental health ambassador and charity fundraiser in the decades since his daredevil career. With the assistance of a specialised walker, he completed the London Marathon in 2011 – a feat that took him 50 days. In the process, he raised over £75,000 for the charity Children with Cancer UK.

In 2021, British TV show Top Gear produced a special episode on Eddie Kidd, inviting the biking legend to look back on his career.

“It was a very emotional time doing that with Eddie, especially at the end when all the different stunt drivers came out,” presenter Paddy McGuinness commented on the episode. “He saw them again and he hadn’t seen them for years, so it was a lovely atmosphere.”

“The raw emotion that came out at the end, I think we were all in bloody tears after that so it will be nice for a generation of people who probably don’t know who he is, a lot of younger people,” McGuinness added. “I’m glad they’ll see what he achieved.”

The programme saw Paddy collect Kidd and his carer from home, and take them on a ride through the countryside in a soft top convertible.

Kidd received an OBE in 2012. Kidd described it as one of the “most important and relevant” moments of his life. “It gave me my dignity back, my self worth,” he commented. “It gave me the ability to inspire others to fight on, to never to give up and always have hope.” Today, Kidd lives with his partner Billie Mobayed in Brighton, England. A full-time carer helps Kiddd to manage his complex medical needs.