The Neighbours Sticker Album! What Stickers Were There To Collect? 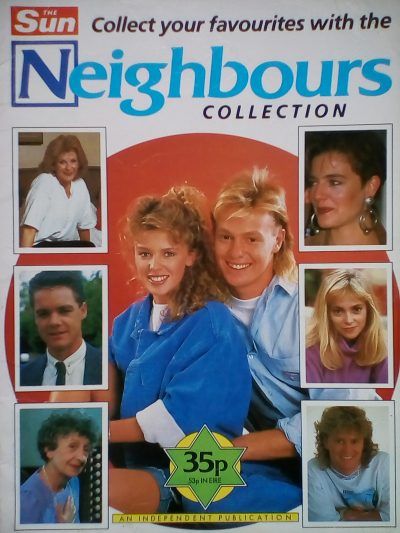 The Neighbours sticker album! The joy of opening the sticker packet, in the hope of the stickers you needed! Kylie with the Queen Mother, Jason on the beach, Jim with a horse, or Henry playing guitar! We were eager to collect all our Ramsay Street favourites! The fun of taking your 'spare' sticker's to school, to swap in the playground! Who had what?! Who would swap?!
Then when you had nearly completed the album, you could send off for the remaining stickers!! The publisher's operated a 'picture card service' at 2p per sticker, with a maximum of 20 stickers! You sent them a stamped addressed envolope and filled with excitement for its delivery!! The Neighbours Collection, lets take a look back at some of the pages in this classic album, which cost just 35p!! 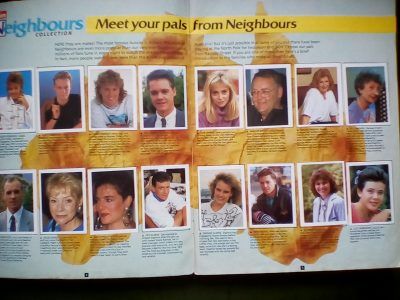 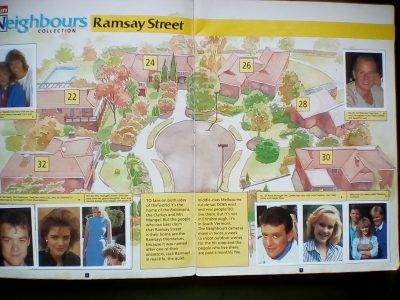 Ramsay Street, named after an ancestor of the Ramsay family, Jack Ramsay. The cul-de-sac street is a real street, but not in Erinsborough, its in South Vermont, Melbourne.
Number 32 was the home of Mrs Mangel, Jane and the lodger, Harold Bishop. At 22 was Gail and Paul, who had married for business reasons. Number 24 the Ramsay residence, which had a swimming pool! The Robinsons at 26, next to them, at 28, the Clarke's, Bank Manager, Des, Daphne, their baby, Jamie, and Mike. 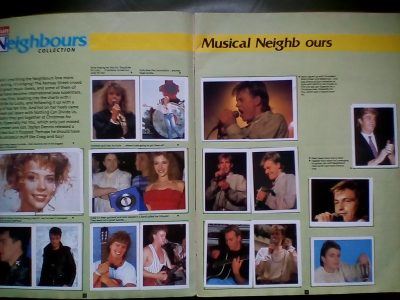 A few Neighbours star’s over the years have tried their luck at pop stardom! Kylie being first, achieving international success! Jason had a string of hits too. Plus Jason and Kylie had a hit together with, Especially For You. Stefan Dennis popped out few tunes and Craig Mclachlan, all together now,’Hey Mona..’ Craig was once in a band called Y Fronts! 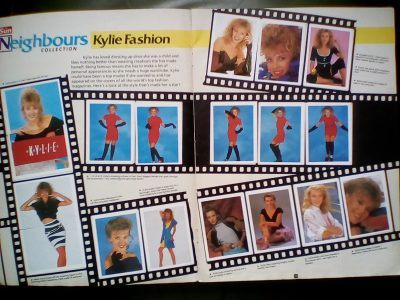 The beautiful Kylie Minogue. Posing in some fabulous 80s outfits!
Rocking the red dress and black socks!! Kylie has appeared on all the worlds top magazine covers! 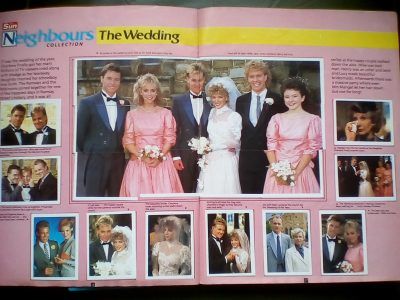 Aww the wedding of the year! Scott and Charlene. It was a classic episode. Viewed by millions!! Charlene looked beautiful, as did her bridesmaid’s, pretty in pink, Jane and Lucy. Scotts best man was Mike, played by Guy Pearce, who has gone on to achieve success in Hollywood.
Remember Charlene walking down the aisle, Madge showing a few tears so out came the hankie! I do believe we even saw a smile from Mrs Mangel at the Church!! 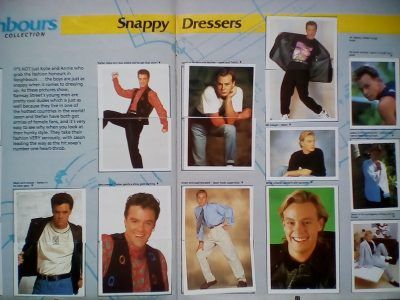 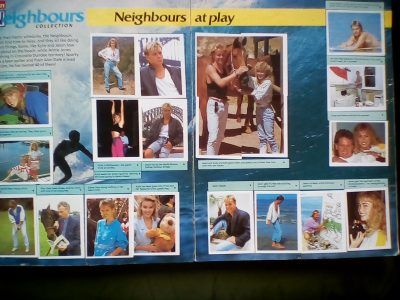 Here we get to see what the guys got up to in their down time! Jason and Kylie both love horse riding! Annie Jones aka Jane, loves photography! Jim (Alan Dale,also achieved Hollywood success, in amongst many things, Ugly Betty) loves to spend a day at the horse races! 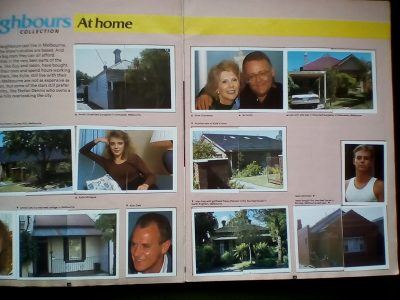 The cast’s real homes. Back then they all lived in Melbourne, but not Stefan Dennis, he lived in a house up in the hills, over looking the city. Kylie was still living with her family, in a four bedroom family home in Surrey Hills, Melbourne. Jason brought a two bedroom home in Burnley, Melbourne. Annie Jones aka Jane Harris lived in Armalade, Melbourne in a three beroom bungalow. Alan Dale’s residence was a four bed house in New Brighton, Melbourne. Harold Bishop (Ian Smith) lived with wife Gail, in a three bedroom bungalow in Elsternwick, Melbourne.
Also there is the sticker of Madge Ramsay (Anne Charlestone) which became known as the – blue toothed madge sticker!! 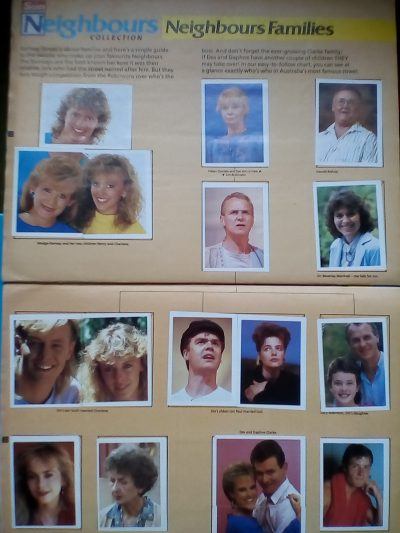 The family tree of Australia’s most famous street! 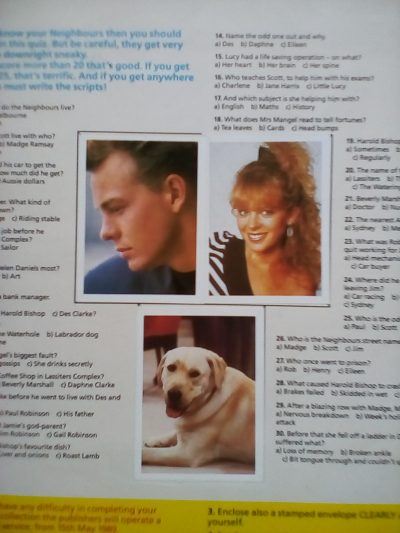 The best is saved until last, its….. Bouncer!!!! The Ramsay Street dog, loved by everyone.

Aww the fun of buying these stickers and seeing what your friends got too, was so much fun!!
Watching Neighbours was always a joy! Getting home after school, having your tea, then 17:35pm, BBC1, it was our daily dose of our beloved Neighbours…