Neighbours Sticker Album Number 2! What Stickers Were There To Collect? 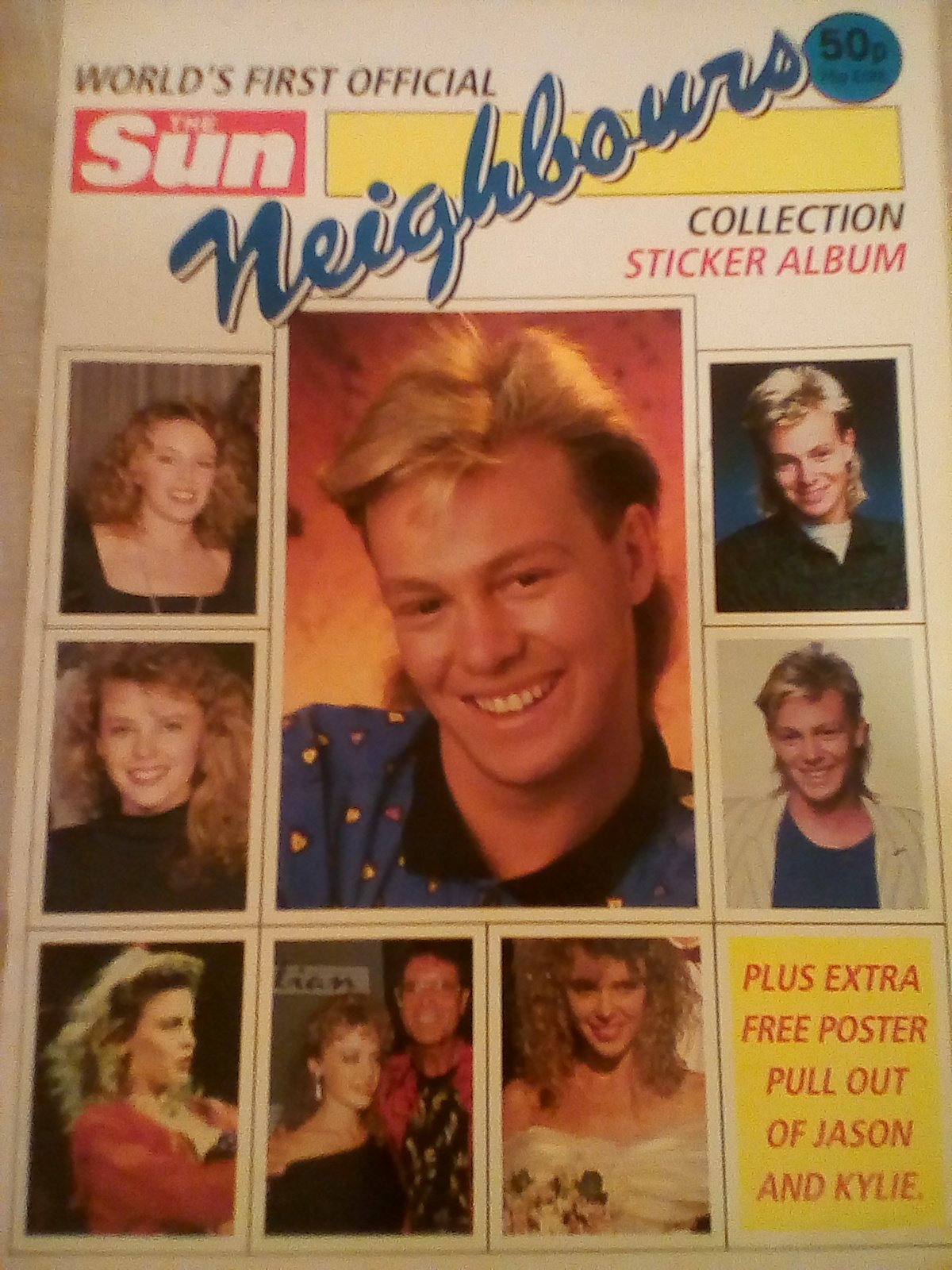 After the huge success of the first Neighbours Sticker Album, the album number two was hot on it’s heels! More buying sticker’s! More collecting! More trading sticker’s in the playground! Boy, did we know how to have fun back then!
Yes album number two had arrived bringing more awesome sticker’s of all our favourite’s from down under!
This album was 50p! It also offered the service of sending off for any remaining sticker’s you needed, but each sticker had gone up from 2p to a whooping 4p!
Let’s take a trip down memory lane, or in this case Ramsay Street…

The cast shot! New faces had arrived in Erinsborough! The very popular Todd and Katie Landers (Kristian Schmidt and Sally Jensen, and sister’s Bronwyn and Sharon Davies (Rachel Friend and Jessica Muschamp). The beloved Scott and Charlene were still Ramsay Street residents! But now they were Mr and Mrs Robinson! 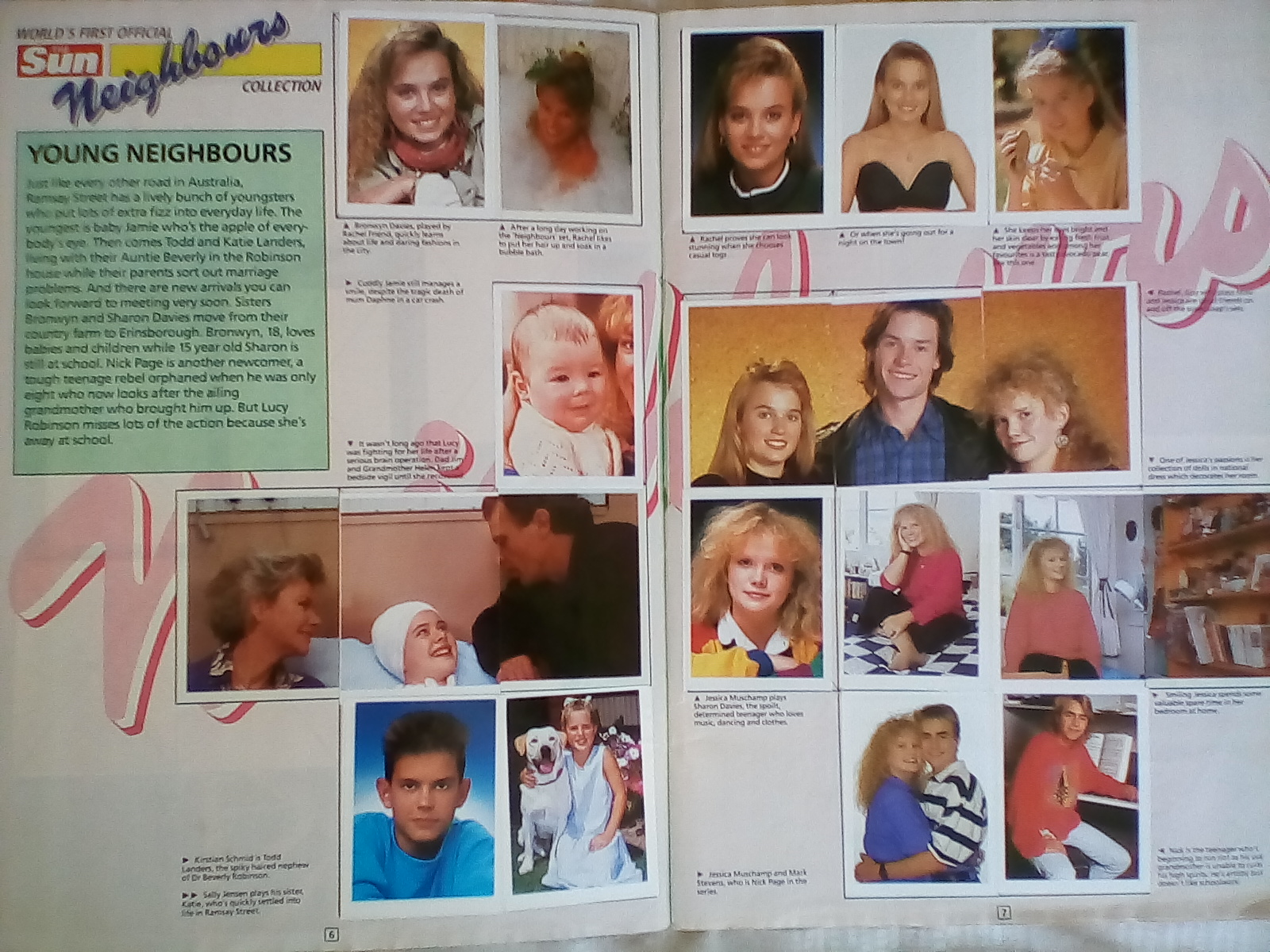 Young Neighbours! Aww look at cute baby Jamie! Des and Daphne Clarke’s baby. Poor Daphne had just died in a car crash. The Davies sister’s came to Erinsborough from their farm in the country. Sharon, 15, was still at school. Bronwyn, 18, loved children and especially babies! Then there’s the Landers, Todd and Katie, who came to live with their Auntie, Doctor Beverly Marsh, in the Robinson household. Whilst their parents sorted out their marriage problems. Beverly had married Jim Robinson! 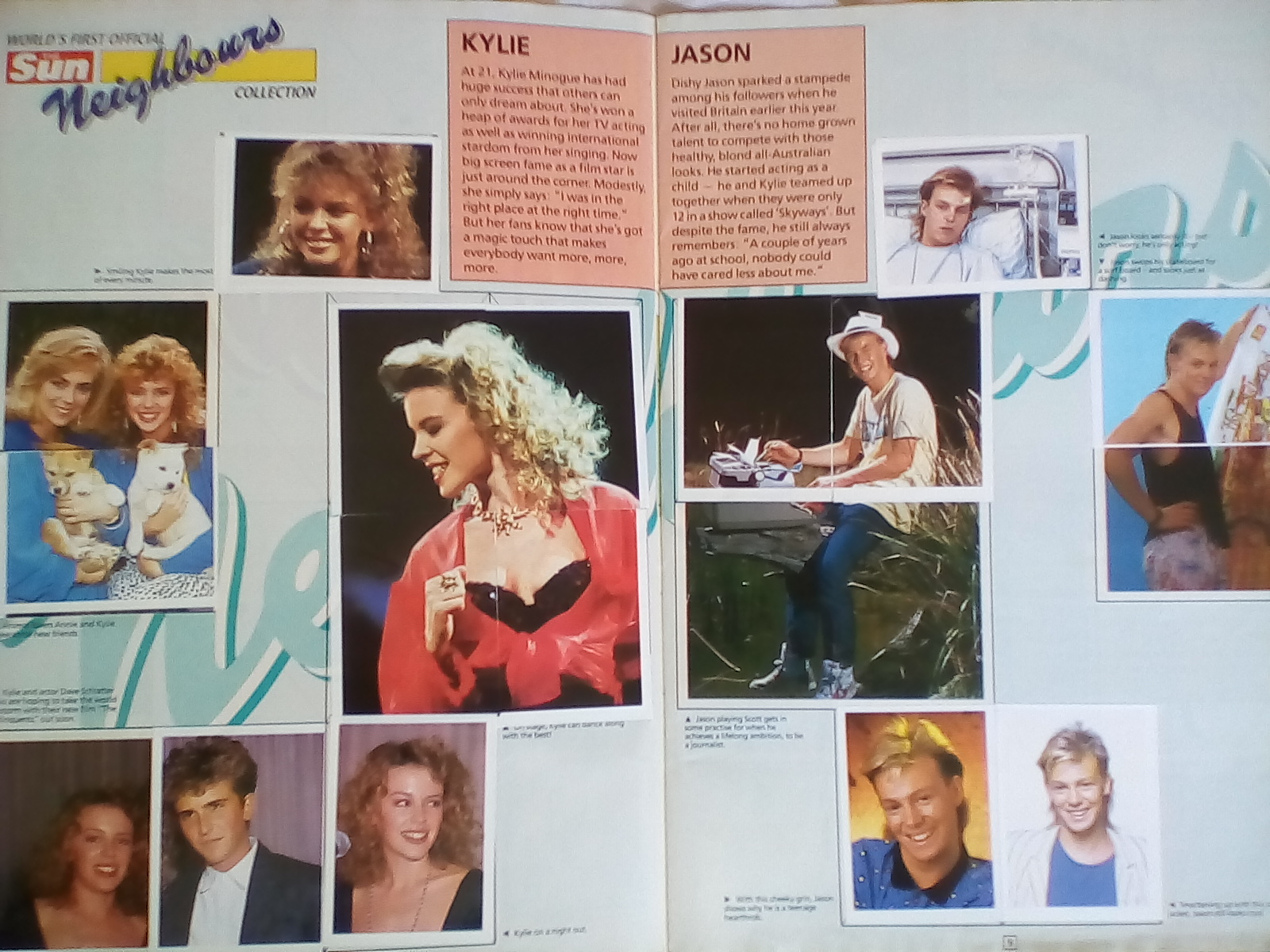 Kylie and Jason! Here Kylie was only 21, her pop career had taken off big time!! She had also made a film, The Delinquents!

Kylie and Jason first worked together when they were 12 years old! In Australian series, Skyways! Jason, like Kylie, also started his acting career in his childhood! Jason’s Father,Terry, was also an actor! But before his son followed his acting work into his adult life, he made sure he studied hard for his school exams!

Inside the houses of Ramsay Street! Which were actually all sets, in the Studio! There was Mrs Mangels, super clean bungalow! Harold Bishop was now living with his new wife, Madge, in the Ramsay residence! The Robinson’s kitchen, where many an argument has taken place!

Mrs Mangel, legend! A gossip, a battle axe, a nosey parker! But she’s truly a one off! Played by actress, Vivean Gray, who was already a well known face before her Neighbours role, having appeared for years in Australian TV programmes and films!

Harold (Ian Smith) the vegetarian, Church going, rather serious man! Or ‘Jelly Belly’ as Lou Carpenter used to call him! Away from acting, Ian Smith, loves nothing more than an afternoon fishing!

Feisty, no nonsense, Madge! Played by Anne Charlestone, another legend of the Street! Anne Haddy, played everybody’s favourite Gran, Helen Daniel’s! Who was a talented painter, even painting Mrs Mangel, with a rather long neck! Helen was the Gran of, Paul, Julie, Scott and Lucy Robinson! 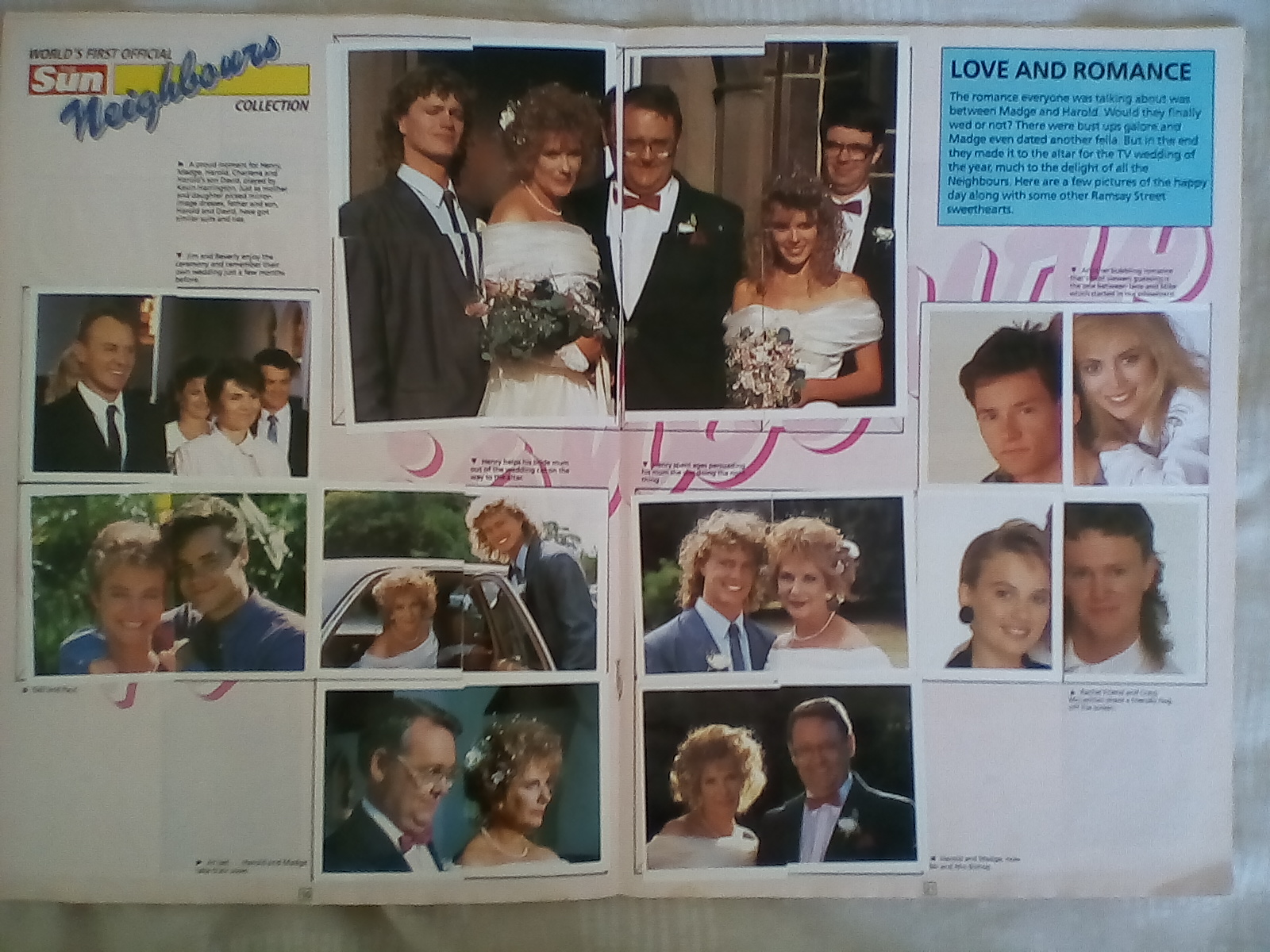 The wedding of the year! Move over Scott and Charlene! It’s Madge and Harold’s turn! They finally made it up the aisle after many ups and downs! The new Mr and Mrs Bishop! Harold’s son, David, even made it to the wedding! Definitely Harold’s mini me! 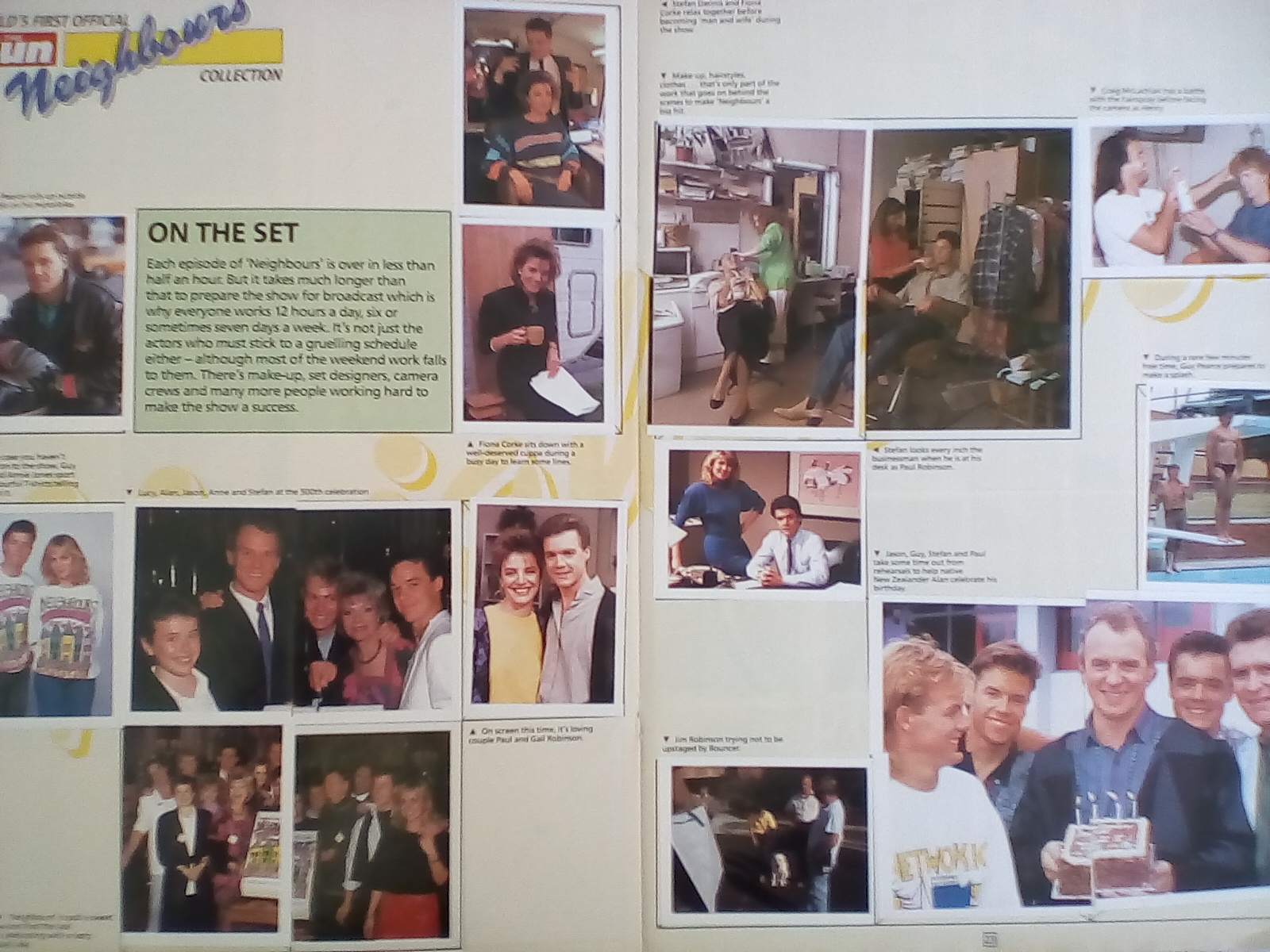 A days filming of Neighbour’s can be as long as 12 hour days! Sometimes even six days a week! Behind the scenes there’s the camera crew, director, producer, set designers, hair and make up. All working just as hard as the cast! 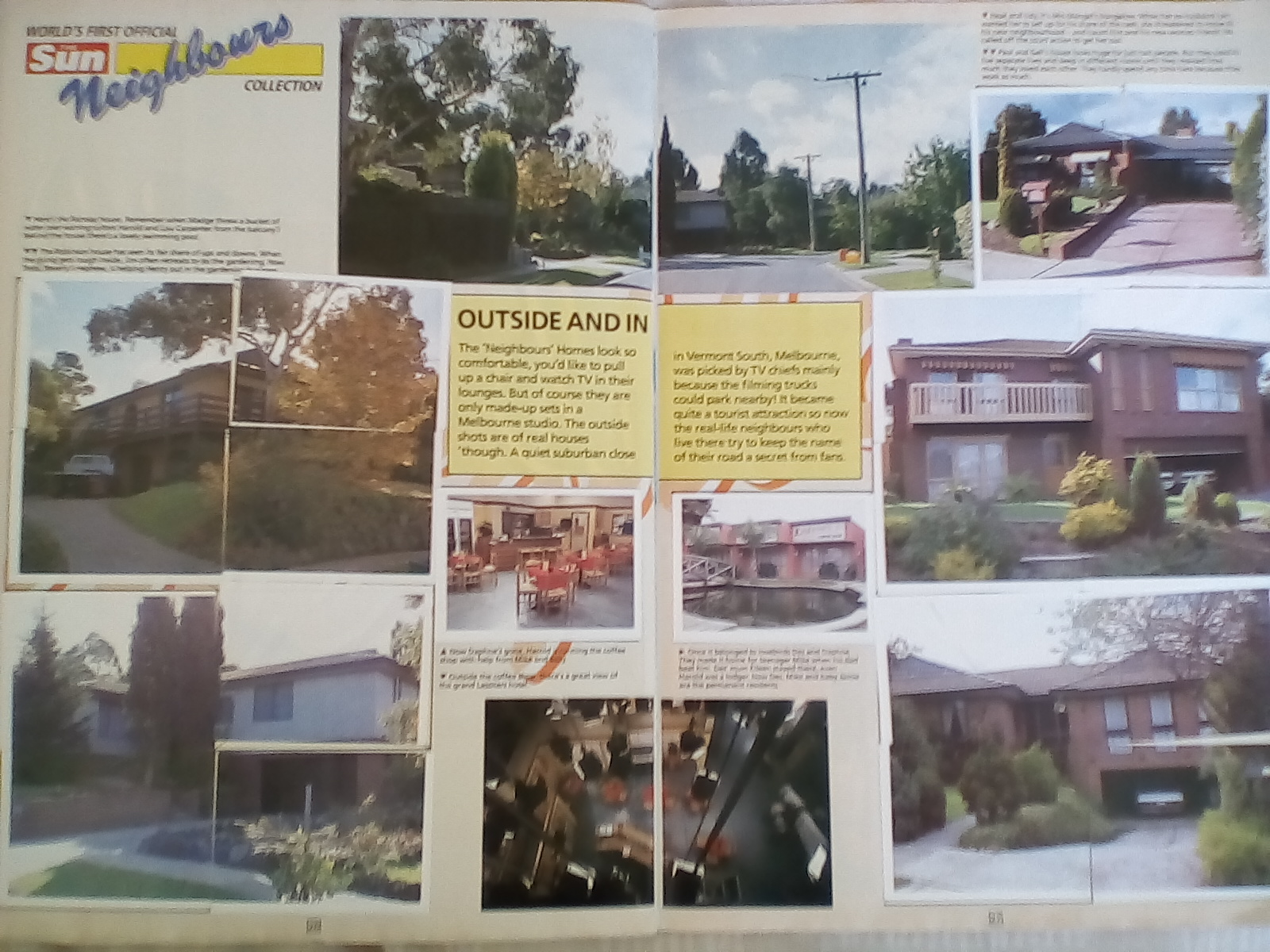 There is the Ramsay balcony, where Madge famously throw a bucket of water over Harold! Harold took over the duties at the coffee shop, after Daphne’s death.

Mrs Mangels super neat and tidy bungalow! Her ex husband Len, took her to Court as he wanted her to sell it, so he could have his share of the money! But Mrs Mangel, never one to miss a trick, said she would move closer to him and his new woman! Len called off the court case!!

The home of Paul and Gail Robinson, who first got together for business reasons! But in the end fell in love!! 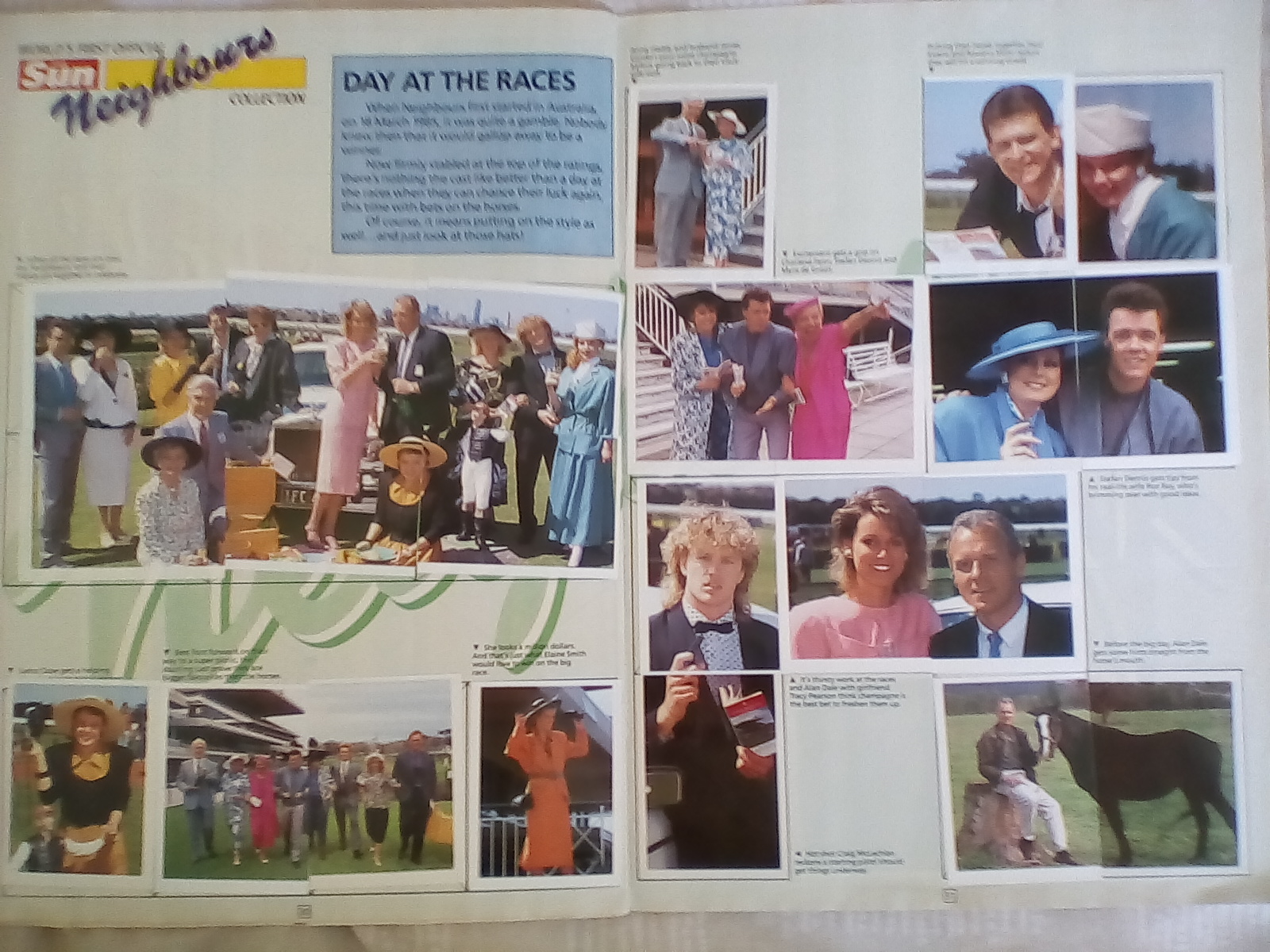 All dressed up for an afternoon at the races! Sasha Close, the second actress to play Lucy Robinson (the first was Kylie Tinker) looking fab in a yellow and black outfit! An Elaine Smith (Daphne’s returned!!) rocking that orange dress! So 80s!! 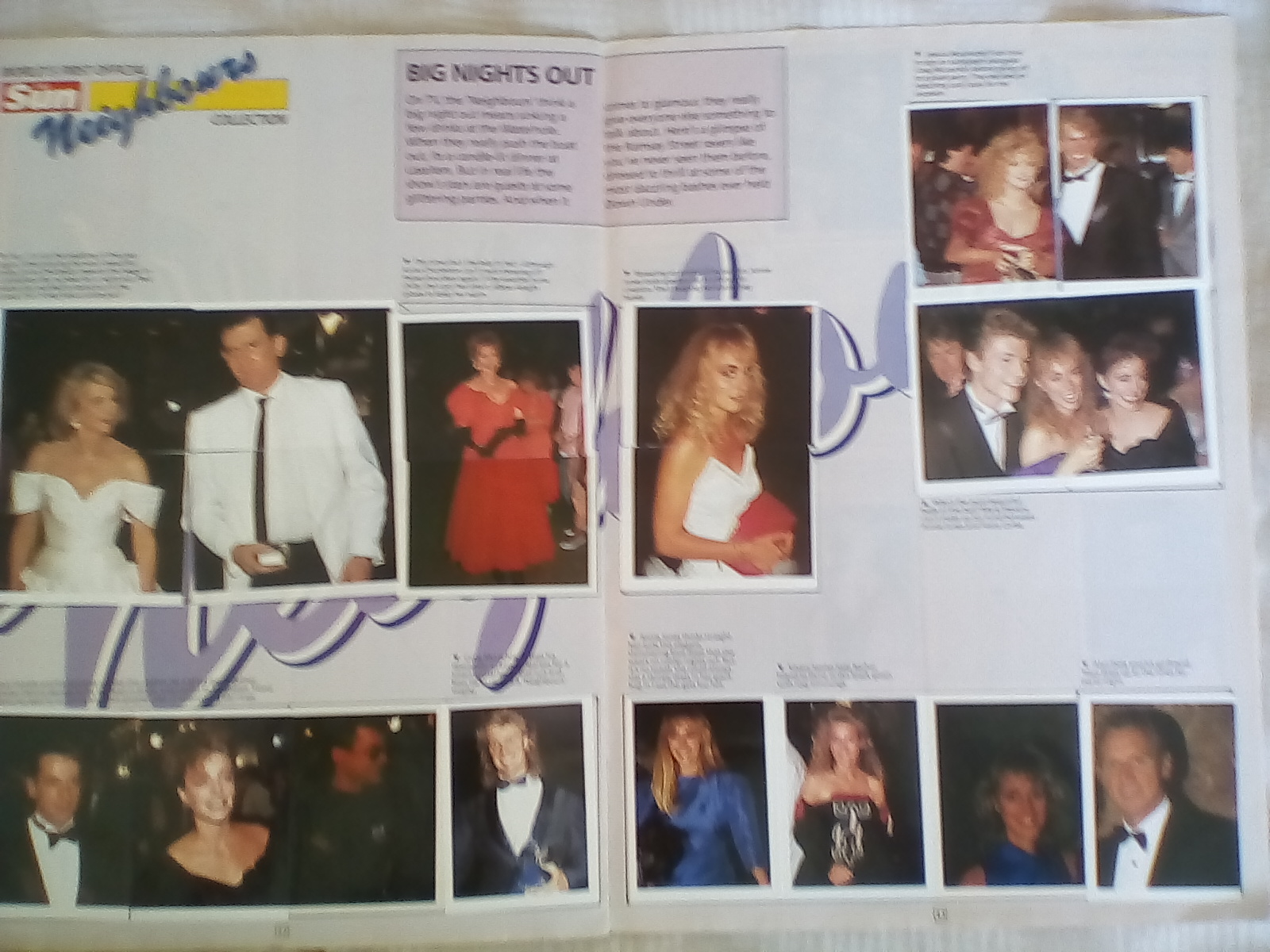 Out on the town! The cast all dressed up for another showbiz party! Craig McLachlan has got out of Henry’s dungarees and put on a suit and bow tie! Lovely lady in red Anne Charlestone! Annie Jones (Jane Harris) looking stunning in white!

The second Neighbour’s sticker album was just as popular and as much fun as the first! New characters have appeared, plenty of loved old remained! And still plenty of drama from the folks from down under!