Remembering The Greatest Soap Opera Wedding Of All Time

Soap opera weddings are often fractious affairs, because even if the bride and groom manage to make it through the ceremony without jilting their partner at the altar, someone somewhere is usually getting lost, kidnapped, or in one or two cases even murdered.

This kind of drama is of course bread and butter in the world of soaps, so why is it that the TV wedding we remember most fondly saw a happy couple getting hitched without a hitch? 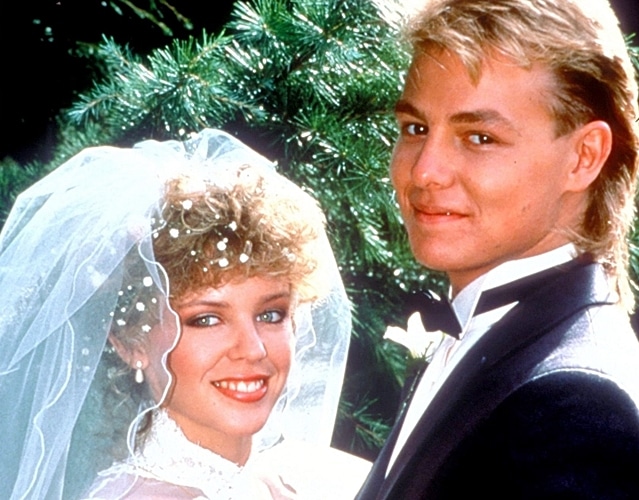 Neighbours wasn’t without its share of traumatic moments, with the death of Daphne being one of the saddest moments in the show’s 37-year history, and Harold’s beach accident being a cliffhanger we’ll never forget.

But the show also made us happy as often as it made us cry, and whilst Bouncer the dog’s bizarre romantic dream certainly managed to raise a smile, the incredible joy we felt when Scott (Jason Donovan) and Charlene (Kylie Minogue) got married has stayed with us well into adult life. 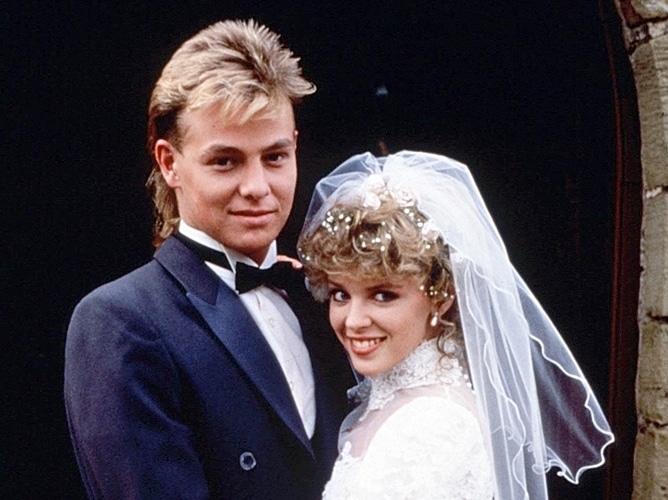 An episode of Neighbours currently pulls in around half a million viewers, so it may be hard to remember a time when nearly a third of the UK tuned in to watch the daily lives of the Robinsons, Mitchells and Mangels.

Scott and Charlene’s relationship was already proving to be a big hit, but in episode 523 on 8 November 1988, the pair tied the knot in one of the happiest TV moments that we’ve ever had the pleasure of sitting through. 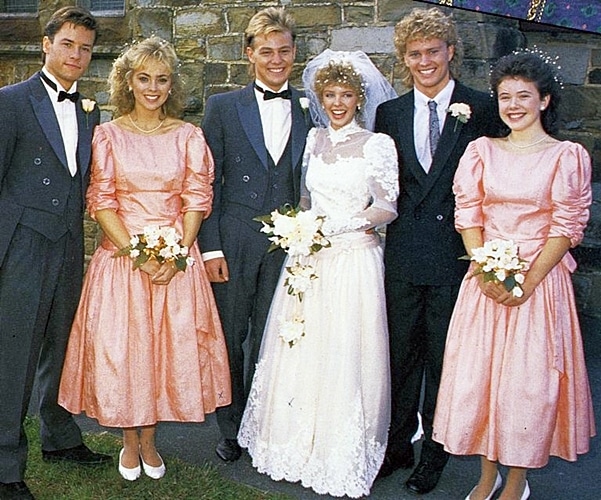 Watching the episode back now, it very quickly becomes apparent that show’s creators made a decision to forget about everything else in order to focus on the big day.

There are no distracting side stories, no jealous jilted lovers and no dangling plot strands to wrap up. We simply get happy families getting dressed and preparing bouquets, and Scott nervously asking his best man Mike (Guy Pearce) and brother Paul (Stefan Dennis) what would happen if Charlene got cold feet and didn’t turn up.

But it’s when the beautiful bride enters the church that things really start to heat up, and whilst the look of love that the happy couple give each other could be put down to great acting, it’s likely that Kylie Minogue and Jason Donovan’s real-life relationship was already in full swing when the episode was filmed.

The magical moment is played out to the sounds of Suddenly by the rock singer Angry Anderson, a track that was chosen by Kylie Minogue herself, but which ironically was prevented from reaching number one in Australia by Kylie’s debut single Locomotion. 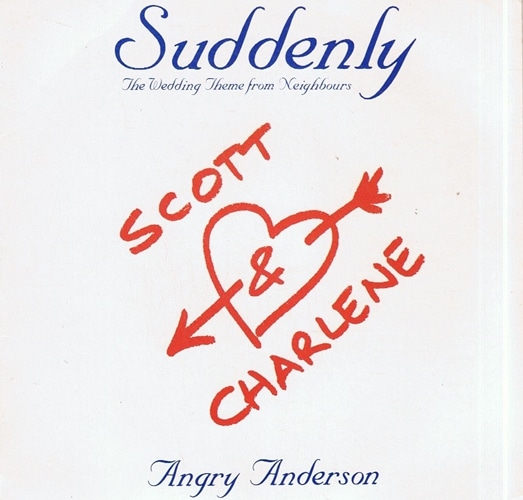 Kylie and Jason’s growing popularity in Neighbours meant that they were already well on their way to achieving superstardom, but it was their on-screen wedding that shot them into the celebrity stratosphere.

Donovan would go on to sell 3 million records and achieve four number one singles in the UK, but it was Kylie Minogue who would really hit the big time in the world of pop music, selling over 80 million records worldwide and becoming the biggest-selling female Australian artist of all time. 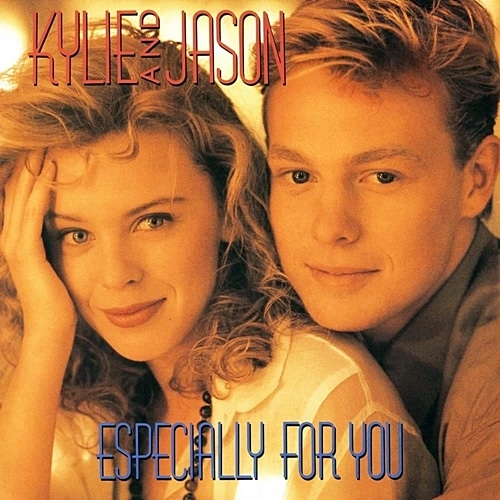 It’s hard to truly recall the massive impact this legendary Ramsay Street wedding had on all of our lives, but it genuinely did capture the heart of an entire nation.

The real-life Holy Trinity Church in Doncaster, Victoria, which was also used for the weddings of Harold and Madge, Drew and Libby and Lucas and Vanessa, is now a tourist destination. There is also an Australian band tnamed Scott and Charlene’s Wedding, while Charlene’s dress has been displayed in a number of different museums. 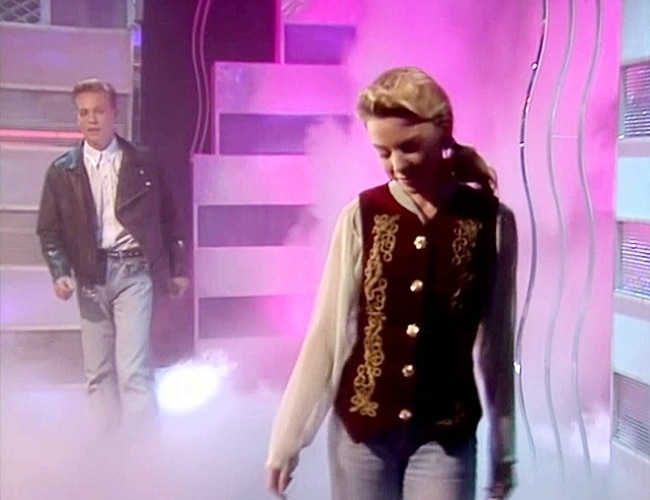 In 2017, the episode’s director, Rod Hardy, agreed that it was the chemistry between the two actors which made the wedding so memorable.

“After the event it stood out, and when I cut it together, and when I look back at it, I don’t think it’s any spectacular cinematic experience,” Hardy was quoted as saying, “but what is there is the heartbeat of two people in love about to be married.” 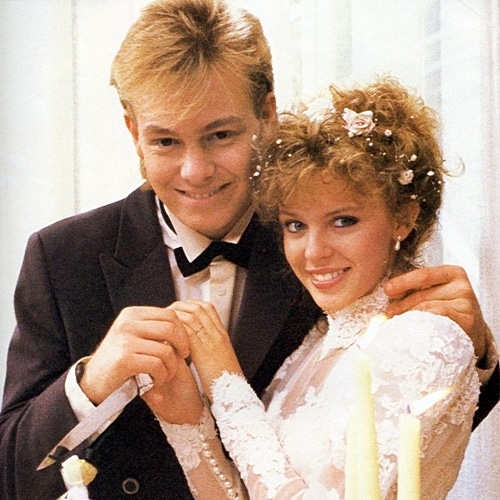 Sadly, Kylie and Jason’s real-life romance faltered when the princess of pop embarked on a relationship with the late Aussie rock god Michael Hutchence.

But we can still end on a high note, because Neighbours itself tells us that Scott and Charlene Robinson have been married for 34 years and are living together happily in Brisbane, and that is most definitely good enough for us.