Even The Most Diehard Pokémon Trainer Won’t Be Able To Identify All Of These Pokémon! 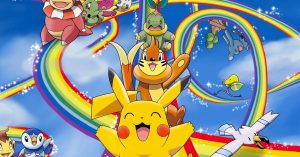 Pokémon is a series of video games developed by Game Freak and published by Nintendo as part of the Pokémon media franchise. It first stormed into the world back in 1996 with the release of Pokémon Red and Green in Japan for the Game Boy.

The games are commonly released in pairs, each with slight variations, with a remake of the games usually released a few years after the original versions for another console. While the main series consists of RPGs, many spin-off games based on the series have been developed by various companies, encompassing other genres such as action role-playing, puzzle and digital pet games.

Including spin-offs, as of November 24, 2017, more than 300 million Pokémon games have been sold worldwide on handheld and home consoles across 76 titles. This makes Pokémon the second best-selling video-game franchise, behind Nintendo's own Mario franchise. It is the world's largest franchise, standing proudly above Harry Potter, the MCU and the rest.

But how much do you really know about these little creatures? Take our test to find out!