Blockbuster franchises and toy lines go together like bread and butter, and that was especially true in the 1980s. Given that Star Wars tells a sprawling story that spans countless planets, cultures and alien races, it’s not surprising that kids swarmed to their local toy stores, in order to take home their favourite characters and act out their own legendary battles between Jedi and Sith.

In the decades since the original trilogy was released, some of these toys have only become more sought-after. Dedicated collectors will now spend up to $250,000 on select Star Wars toys, with many more retailing for between $5,000 and $10,000 on the resale market. These are the rarest Star Wars toys out there. 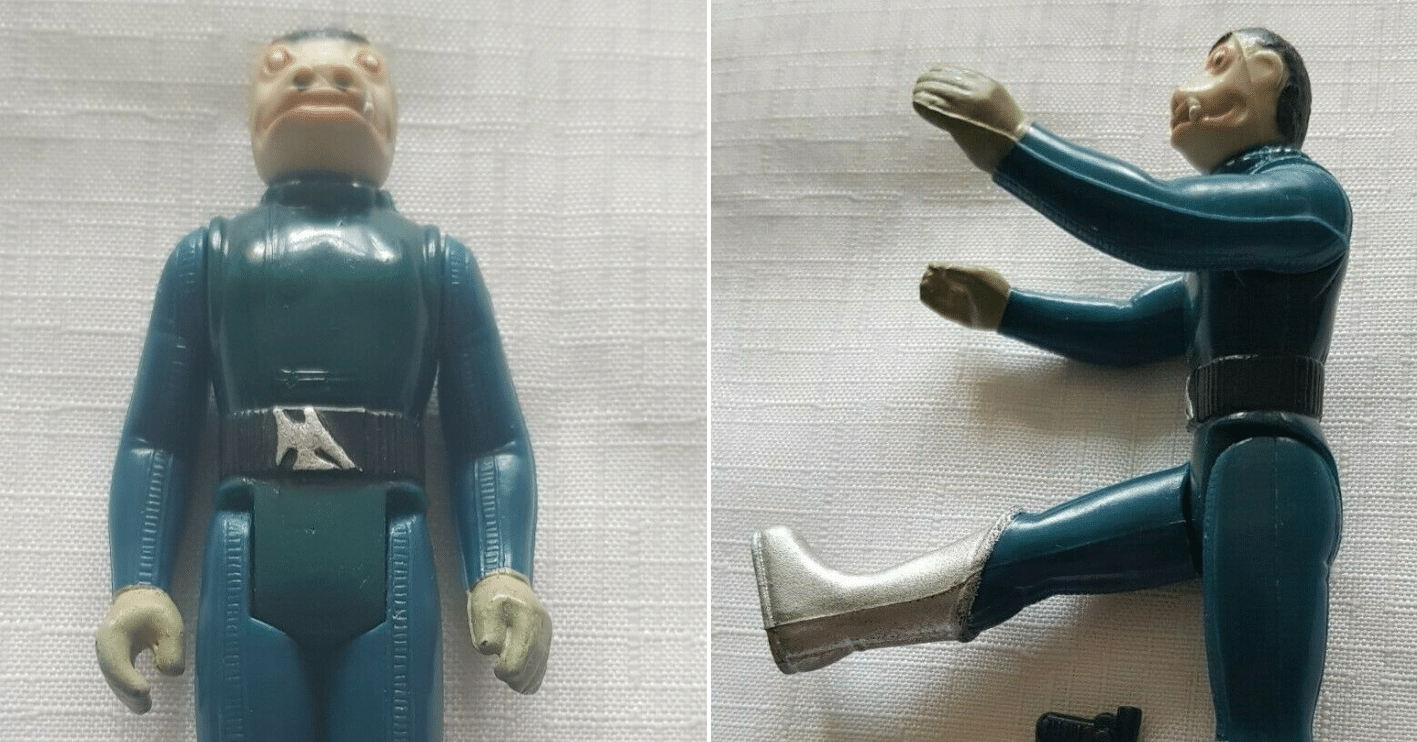 The original Star Wars trilogy was such a pop-cultural juggernaut that demand for Star Wars-related action figures was insatiable, as fans wanted more characters to play with than just the main gang. As a result, by 1985 toy company Kenner had released over 100 action figures, with many of them depicting characters that appeared in just one scene.

The most famous of these tertiary figures was Snaggletooth, the Snivvian male who encounters Luke Skywalker and Obi-Wan Kenobi in Mos Eisley. Though in the film Snaggletooth is short in stature and wearing a red uniform, the rushed-out toy line featured a full-size Snaggletooth in a blue jumpsuit. This error was corrected in later versions, making the original more valuable by comparison. 1978 Snaggletooths now sell for around $350. 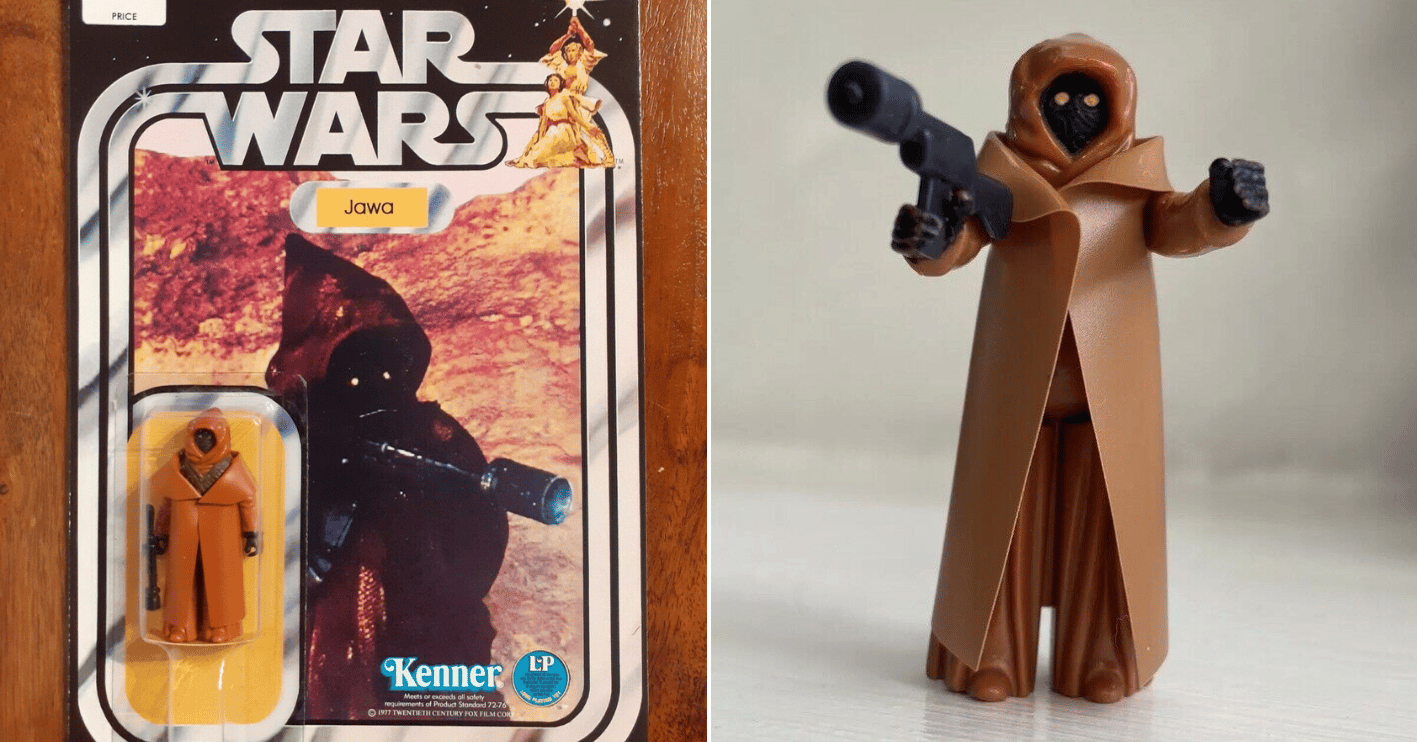 Despite never having any understandable dialogue and their ways and culture remaining something of a mystery, Jawas have been a huge part of Star Wars mythology right from the beginning. It’s no surprise, then, that Jawas have a significant amount of merchandise to their name, the rarest of all being the Kenner 1978 Jawa action figure, one of the 12 original Star Wars figures released by Kenner.

The value lies in the toy’s vinyl cape, as later editions replaced this with a sewn-on cloth cape, in order to make up for the fact that the Jawa figure was the same price as all the other characters sold, despite being half the size. The vinyl cape Jawa has been known to fetch up to $25,000 at auction when kept in mint condition in its original box. 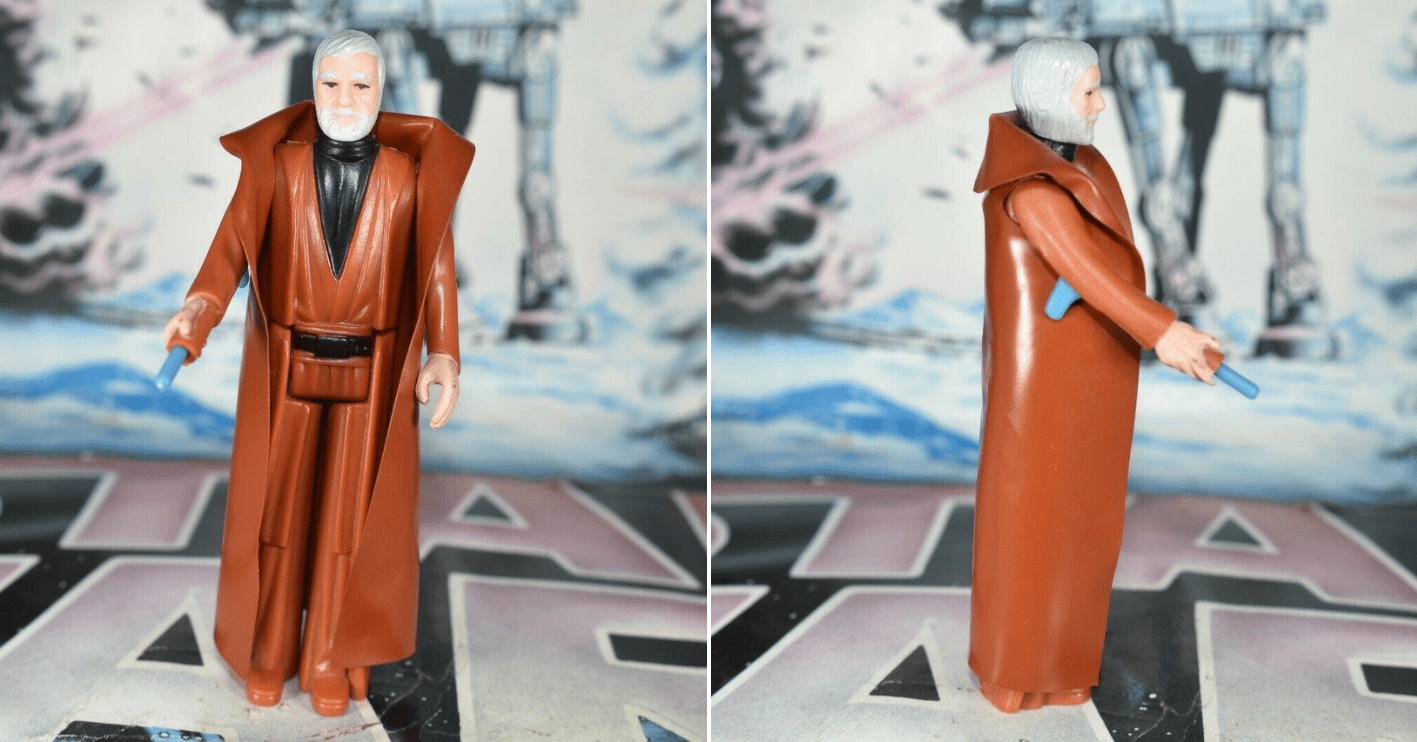 The first time Kenner released action figures of Luke Skywalker, Obi-Wan Kenobi and Darth Vader, all three were equipped with DT (double telescoping) lightsabers, meaning their lightsabers had the ability to extend out not once, but twice, allowing for a longer lightsaber in a smaller base. The downside to this design was it increased both production time and cost, and so it was eventually scrapped in favour of single telescoping lightsabers.

Though all three DT figurines are rarer than their ST counterparts, the DT Luke Skywalker is the most common of the trio, since it was released earlier and in production for longer, leaving less demand for the toy on the resale market. However, if kept in the original packaging a DT Obi-Wan Kenobi sells on average for $148. 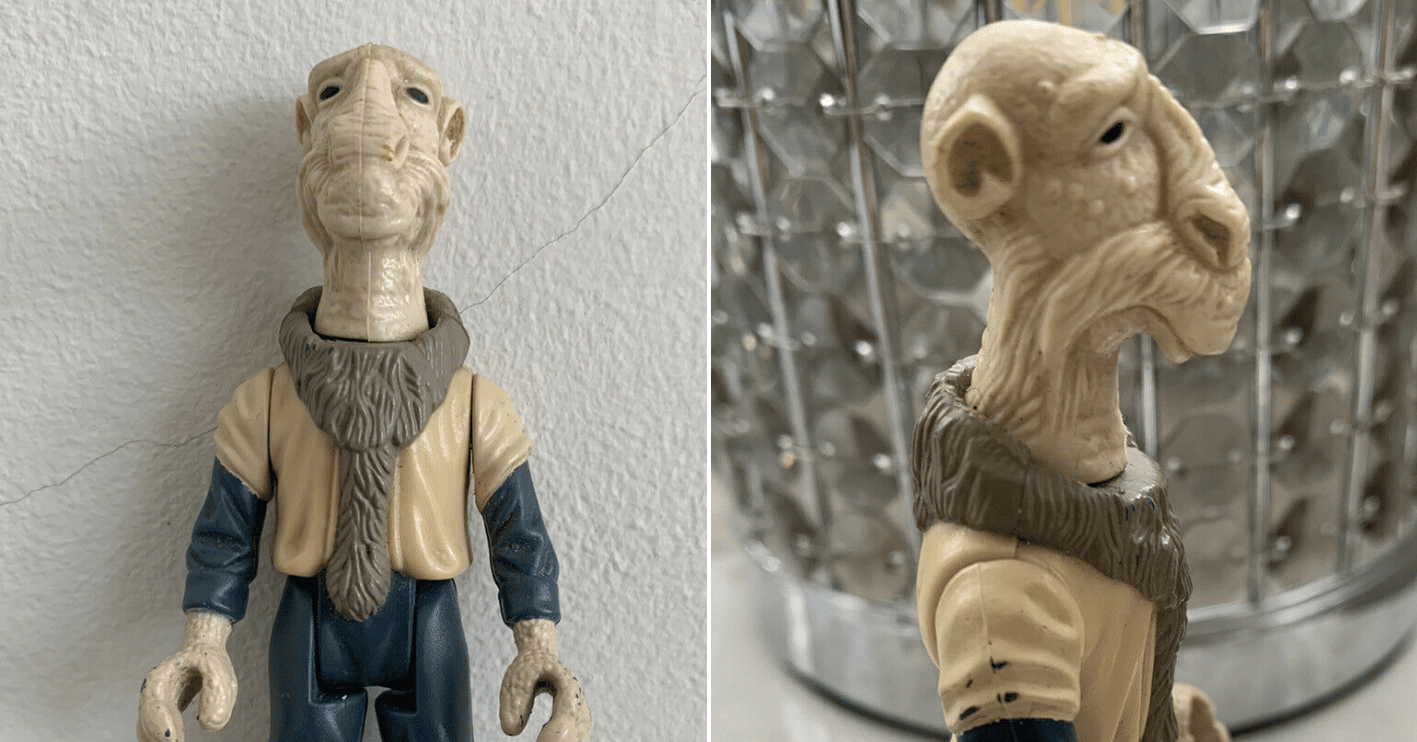 Perhaps the strangest Star Wars action figure to become sought after by collectors is Yak Face. Otherwise known as Saelt-Marae, the character first appeared in Return of the Jedi, and was one of the last characters to be turned into an action figure by Kenner. Though Yak Face made it onto shelves in Europe and Canada, it never hit stores in America, as Kenner canned the Star Wars toy line due to struggling sales just before Yak Face was due to be released.

Though Saelt-Marae is not exactly a beloved character, the fact that the Yak Face figure was never available to purchase in America has made the toy a must-have for Star Wars collectors in the US. As a result, a Yak Face in mint, out-of-the-box condition or still including its original packaging can resell for between $500 and $1,000. 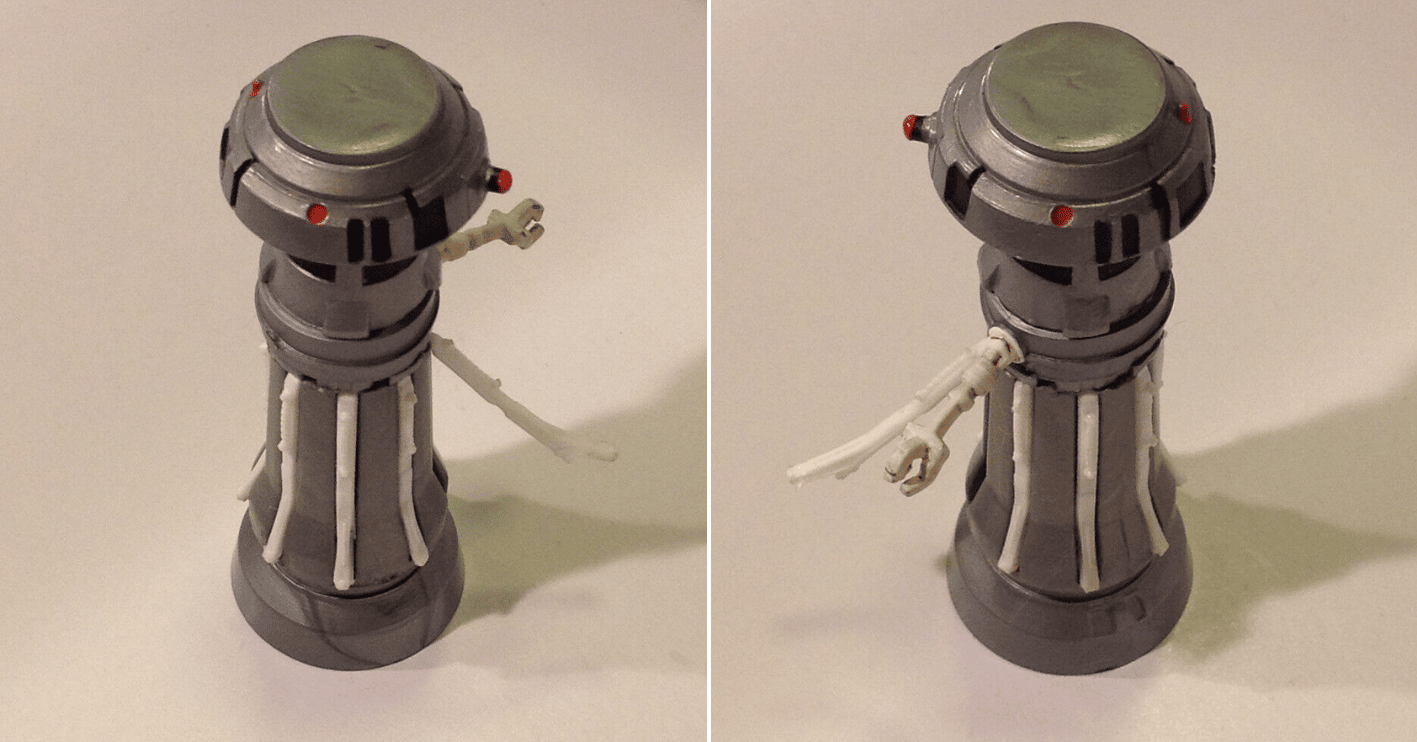 Maybe the most tenuous thing to be turned into a toy as part of the original Kenner Star Wars line is The FX-7 medical droid. The FX-7 appeared on screen for just 20 seconds during Empire Strikes Back, helping to heal Luke Skywalker after Han Solo brought him back from Hoth.

The original FX-7 medical droid was released twice, first on a TESB 31 backing card in 1980, and then again on the Tri-Logo ROTJ backing card. As a result, there is often a lot of confusion around this figurine on the resale market, with some selling for as little as $5 on eBay, while others sell for up to $12,000 at auction. 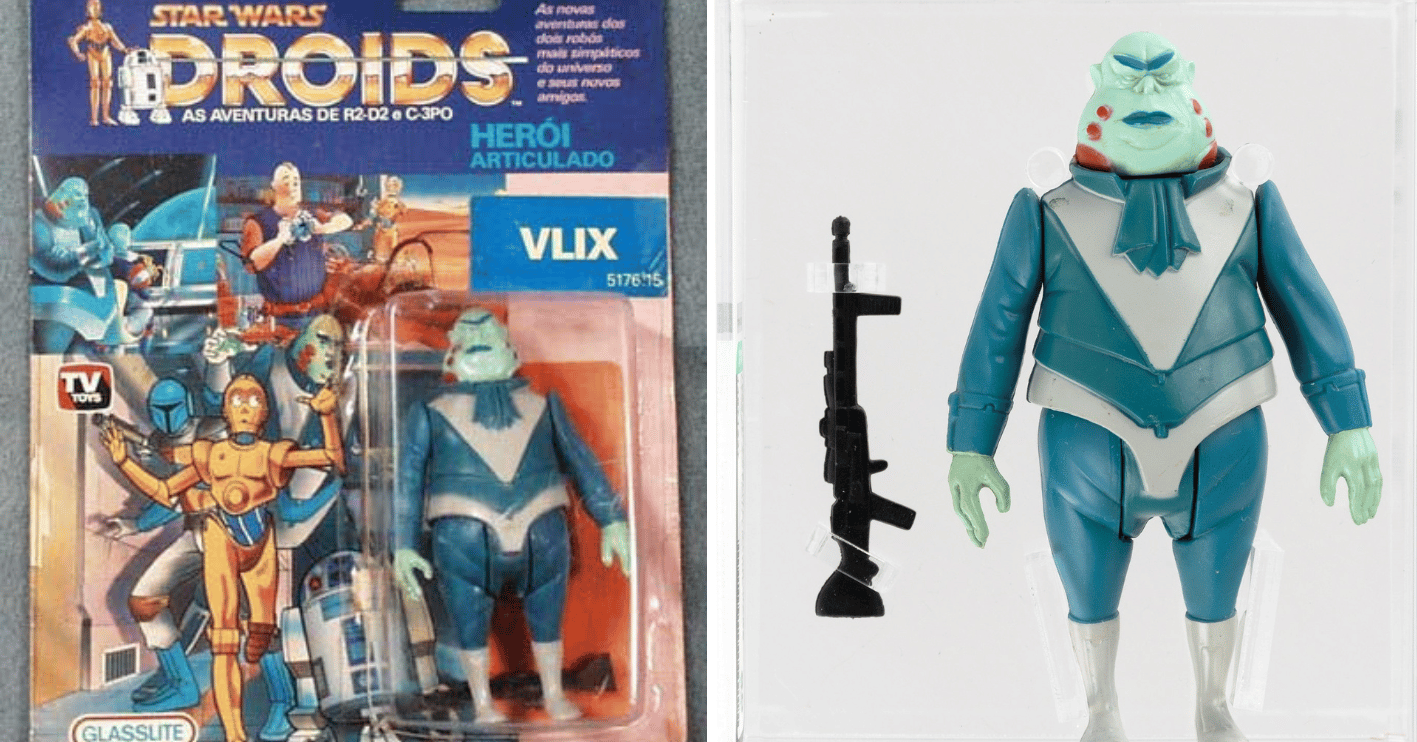 If you’re a casual Star Wars fan but not a dedicated collector, then you may not know the name Vlix Oncard. The droid is an Annoo-dat Blue who worked as the head of security for the infamous Fromm Gang, and was part of the planned line-up for the second round of droid action figures to be released in 1988.

However, a lack of demand meant that the Droids toy line was put to bed after just one round of toys was released, and so the Vlix action figure never officially hit shelves. Still, one of these figures later showed up in Brazil, indicating that a few prototypes made it out into the world. In 2022, a Vlix figure without its original packaging can fetch between $5,000 and $20,000, while one still in its packaging can sell for up to $60,000. 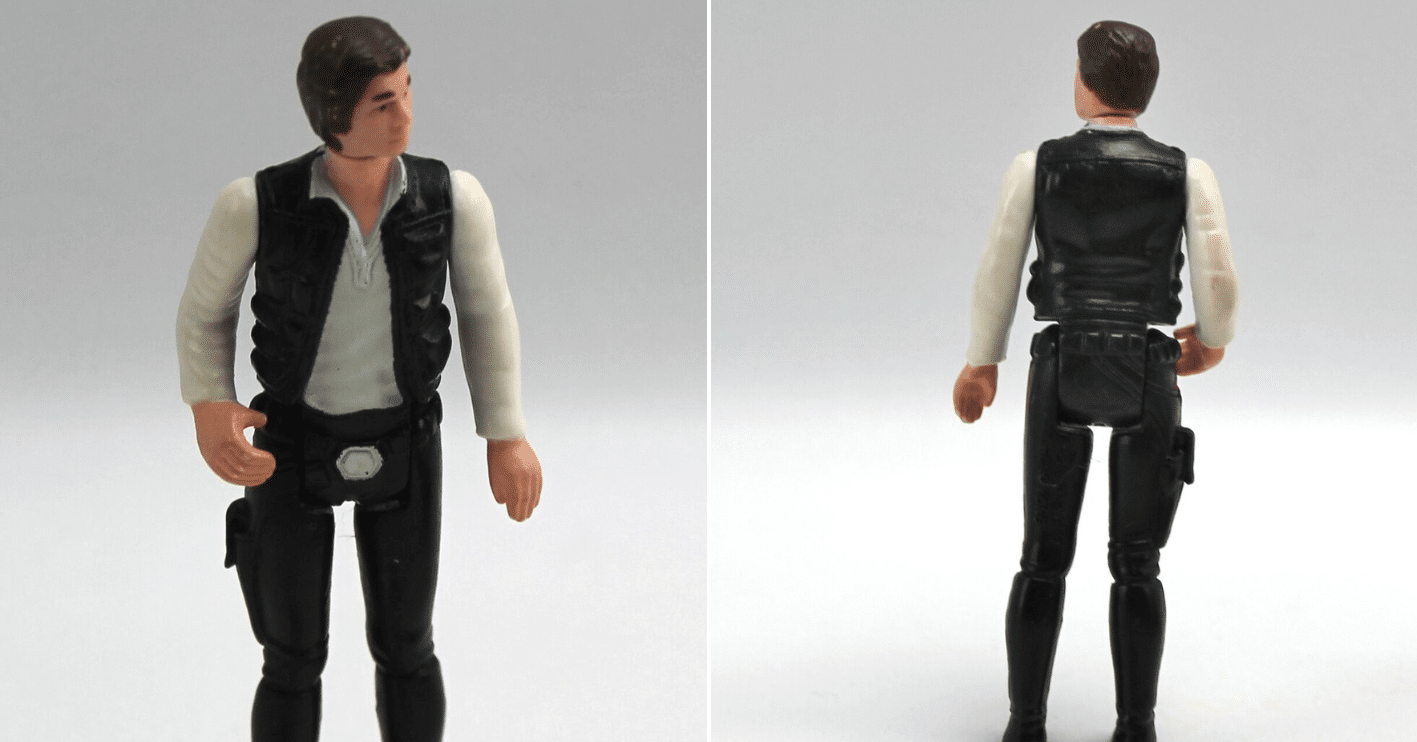 To coincide with the release of The Empire Strikes Back in 1980, a new Han Solo action figure was released in America. Unfortunately, it didn’t take Star Wars fans long to realise that something was off: the head on this particular run of Han Solo dolls was far too small for the body. As a result, it was quickly pulled from shelves.

However, like many other retro toys with endearing imperfections, the ‘small head’ Han Solo figure soon became adored by fans and desired by collectors. Nowadays, the smalled headed Han Solo is one of the most valuable action figures of the central cast on the market, often selling for around $2,500. 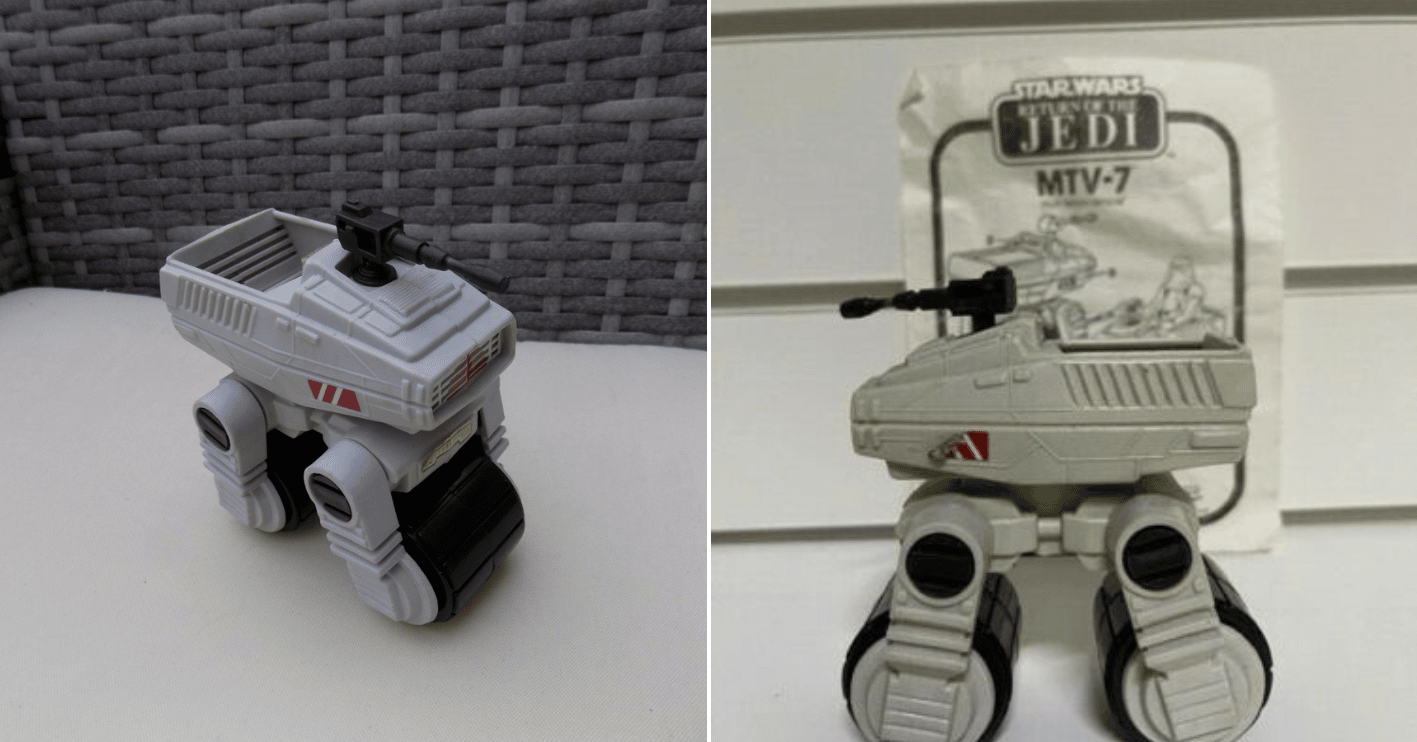 Out of all the retro vehicles Kenner produced as part of their Star Wars range, the MTV 7-Inch Mini Rig has remained the most valuable to collectors. Within the Star Wars universe, the MTV, which stands for Multi-Terrain Vehicle, was designed for people to navigate the unforgiving Hoth landscape.

The toy, however, was released to tie in with (the Hoth-less) Return of the Jedi. Given that not many of these were made, and that even fewer still exist today in a high level of repair, MTV-7 Mini Rigs can resell for $7,155 when still in their original packaging. 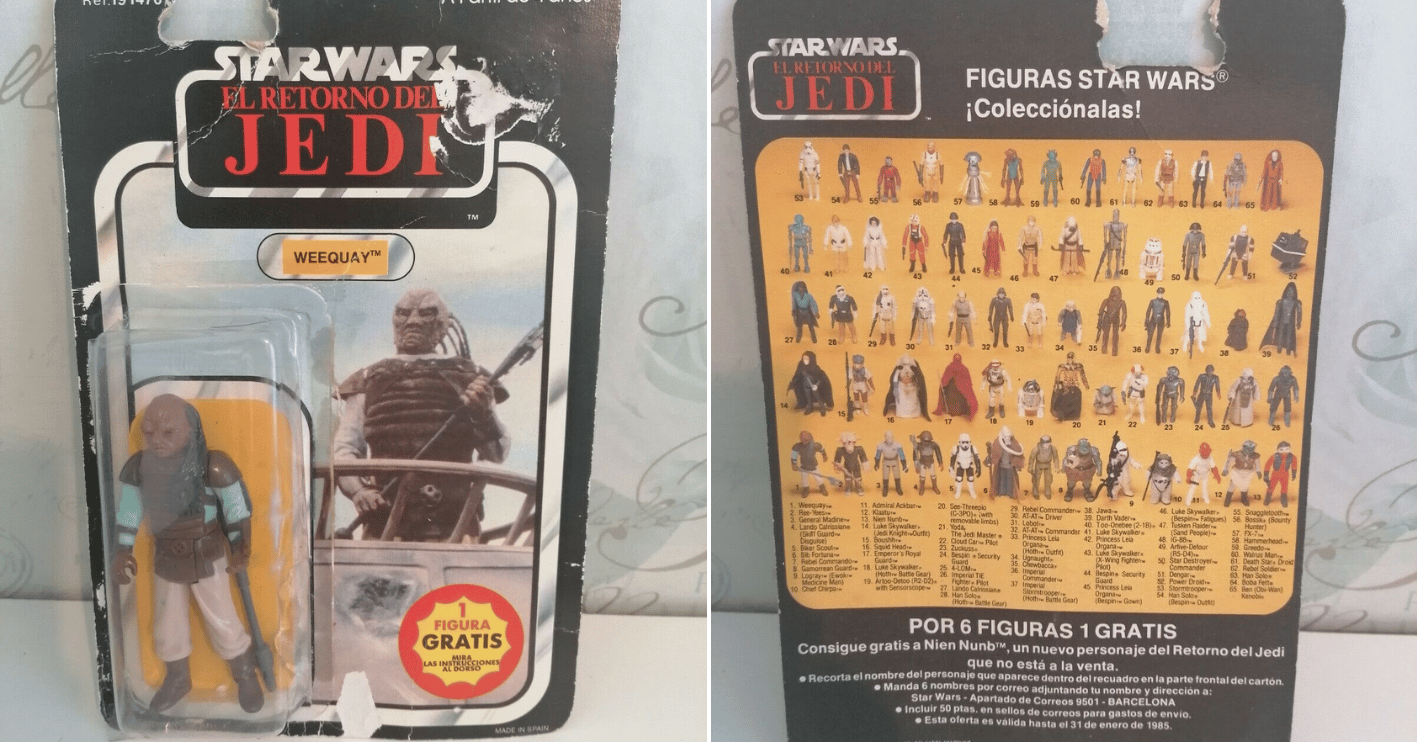 The older a toy is, the more money it is likely to make; the value will go up if the toy still has its original packaging or is in out-of-the-box condition; and limited edition or anniversary toys will often be worth more as a baseline. The other factor that can increase a toy’s value is regional or national variation.

Star Wars toys with another language printed on the box or label, which hit shelves outside of the US, were often released in much smaller numbers and so are prized by collectors. Any Spanish-language action figure from the early 80s has the potential to sell for up to $5,000, depending on the box quality and popularity of the character. 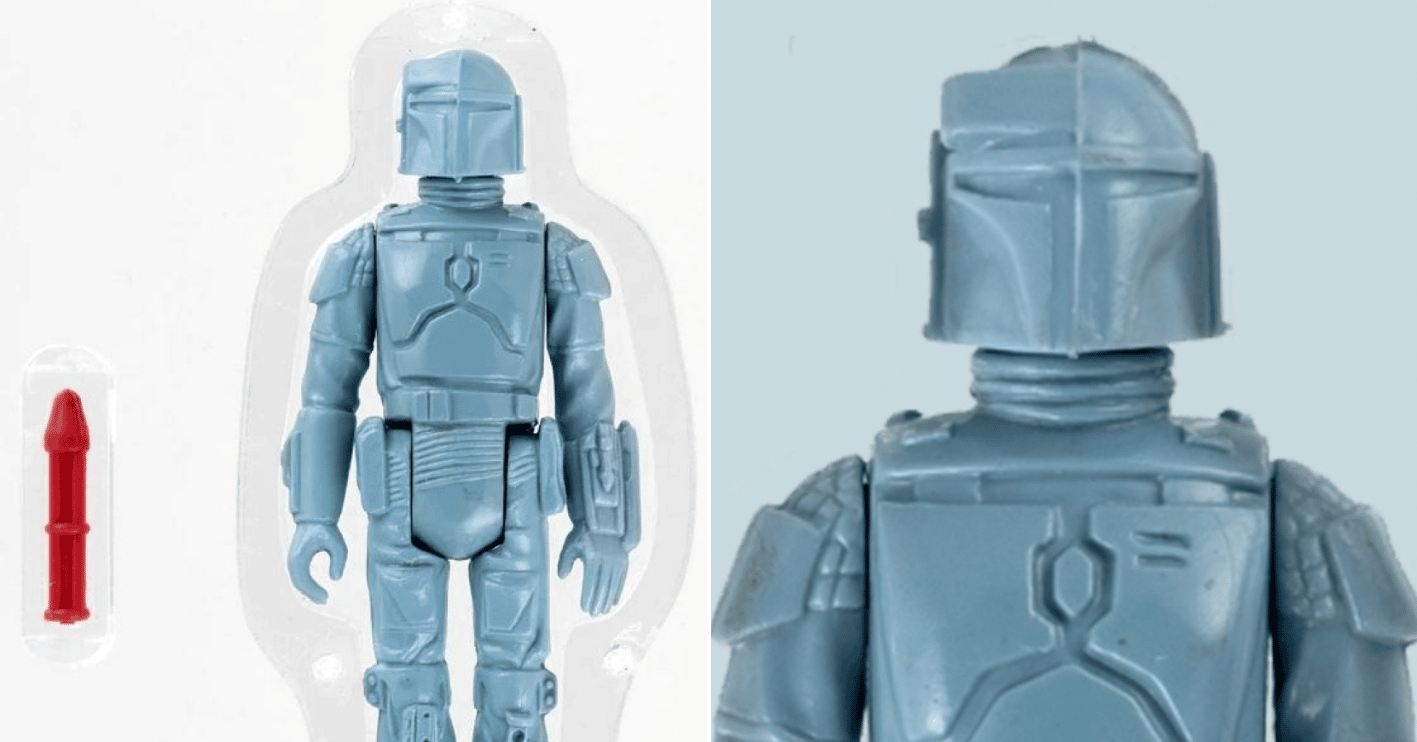 The older a toy is, the more valuable it’s likely to be. However, it’s also true that the more unfinished it is, or the earlier it is in its production journey, the more someone will be willing to pay for a toy at auction. It’s no surprise, then, that the Star Wars toy that broke records on the resale market was the unpainted L-Lock Rocket Fire Boba Fett.

This prototype was a research project to determine the safety and usability of a certain kind of rocket launcher mechanic and was never officially sold. In fact, it never even received a printed facade. All these factors made it the absolute crown jewel for any collector’s horde, leading to a whopping resale price of $236,000. 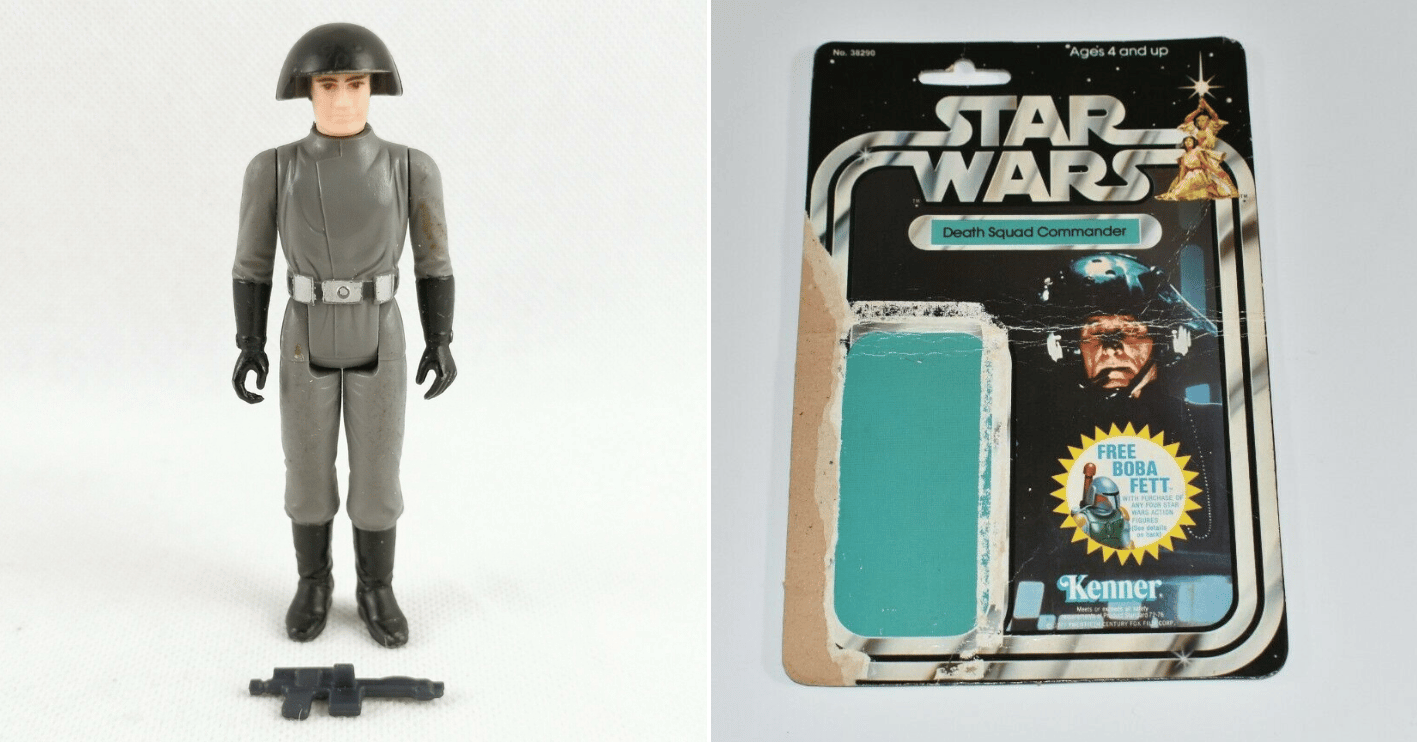 It’s no secret that the bad guys in Star Wars are based on certain historical authoritarian figures. Even so, after Kenner released the Death Squad Commander action figure, the company realised that the name was both loaded and way too dark for kids. As a result, a new label was rushed out renaming the toy the more innocuous Star Destroyer Commander.

If you’re lucky enough to have one of these action figures still in or with its original packaging, and the backing card reads Death Squad Commander, then you’re in luck. Collectors love the toy’s original name and will pay up to $6,500 for a boxed-up action figure still in like-new condition. 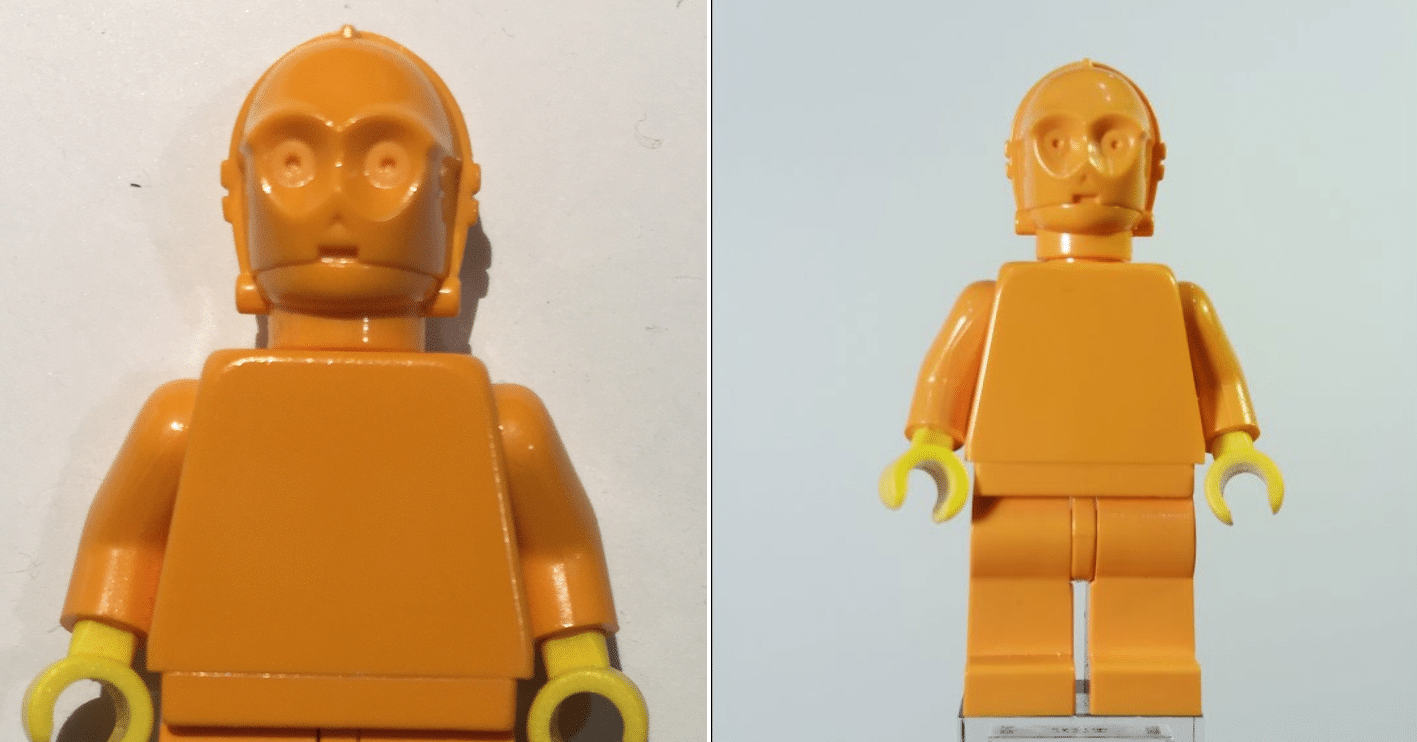 Many different C-3PO action figures have been released since the 1980s, but the most valuable of them all is the Lego Minifigure prototype from 1999, which was unveiled as part of Lego’s line of end-of-the-millennium collectable figures. As you can see, the bright tangerine paint they chose for the body… looks a little much.

The bold choice of colour meant that this version of Lego C-3PO did not stick around for long. However, since this version was already a collectable and released as part of a limited edition Lego toy line, it often sells for over $3,200 on the resale market. 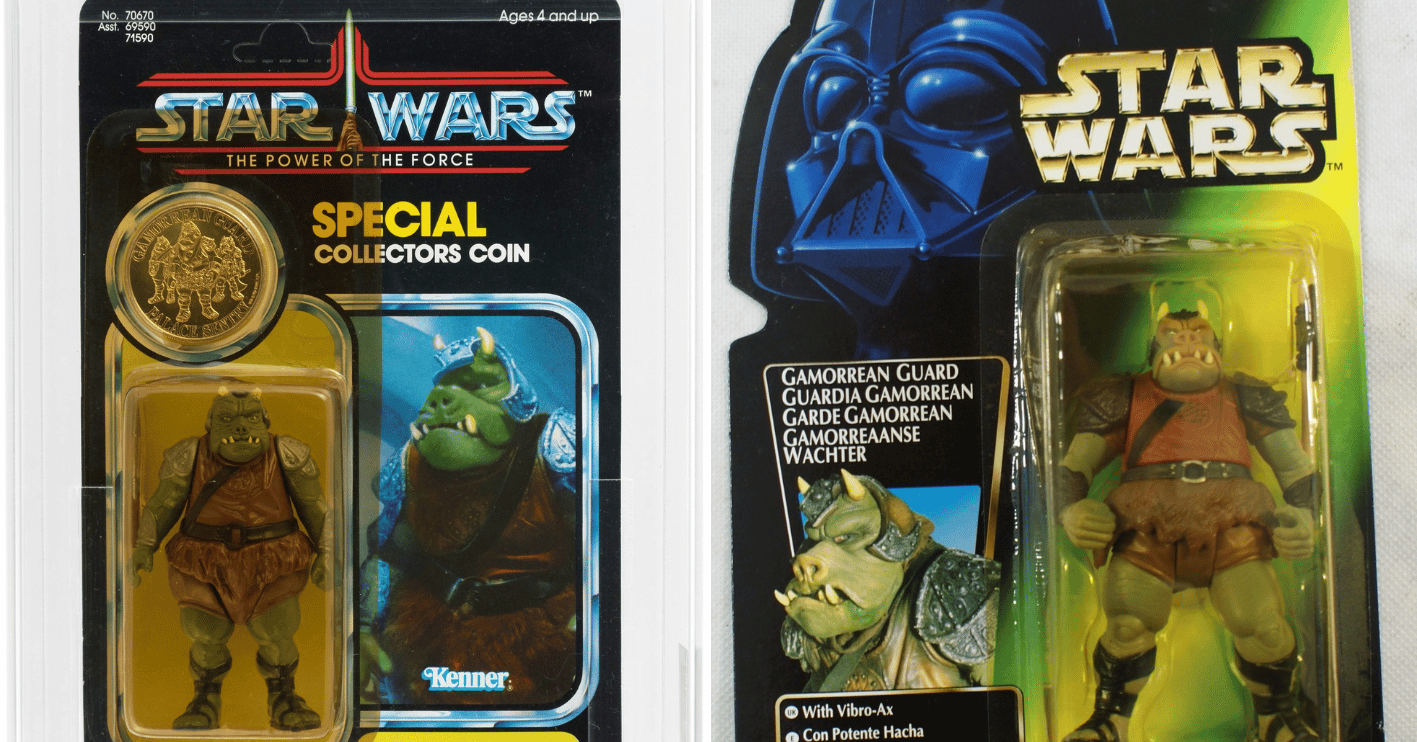 The hog-like Gamorrean Guard, first seen patrolling Jabba’s palace in Return of the Jedi, aren’t particularly well-liked within the Star Wars universe or by fans outside of it. Why, then, can boxed-up action figures of these characters fetch up to $5,500 on the resale market?

The answer lies in the commemorative coin that certain editions of the action figure came with. Though entirely worthless from a monetary point of view, the added extra is hugely desirable to enthusiasts, as it’s yet another element that can be collected in conjunction with or independent from the action figures themselves. 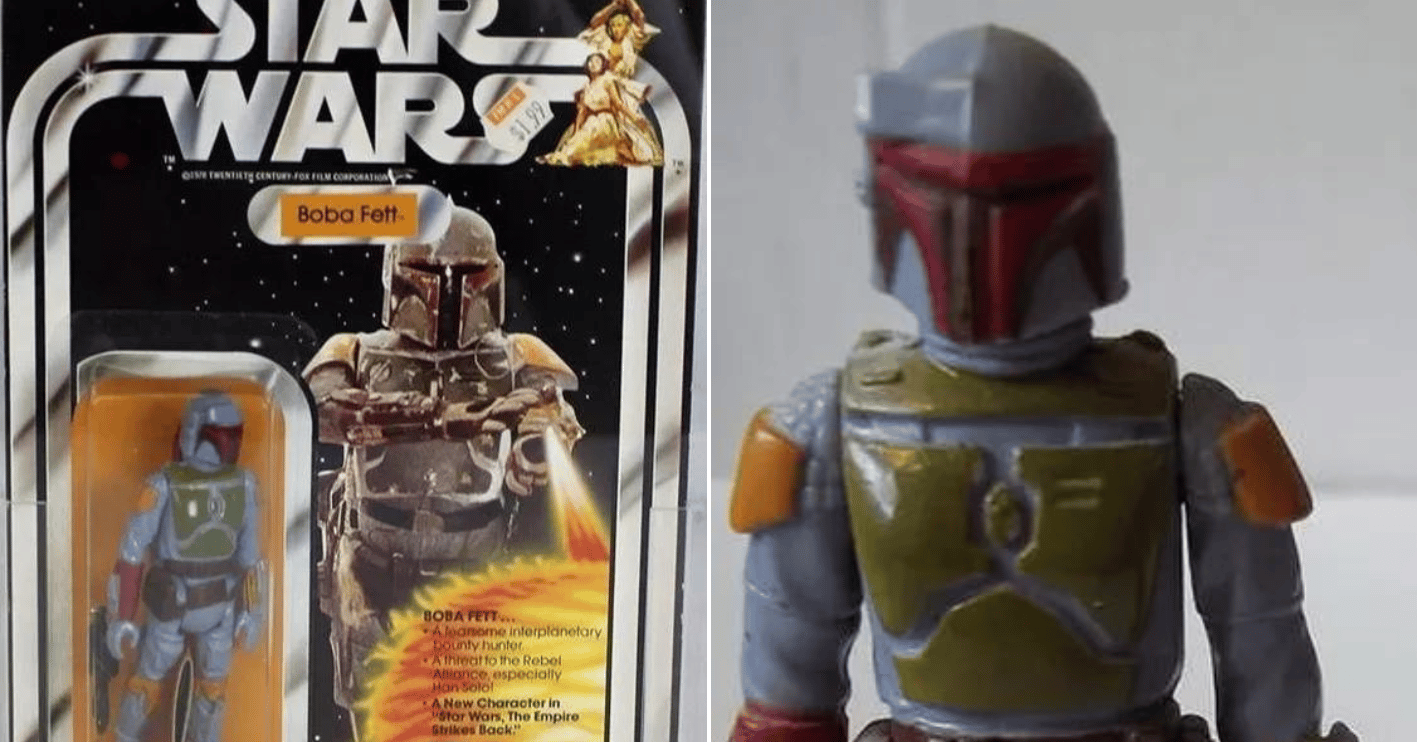 Though Boba Fett is best known for his memorable debut in The Empire Strikes Back and more recently the additions to his backstory provided by Disney+ shows like The Book of Boba Fett, his first appearance was actually in the much-maligned Star Wars Holiday Special.

As such, when the first Boba Fett tie-in action figure was released to commemorate his addition to the Star Wars universe in 1979, almost nobody bought it. Nowadays, Boba Fett is a fan-favourite Star Wars character, leaving the surviving 1979 action figures worth a hefty $12,000 each. 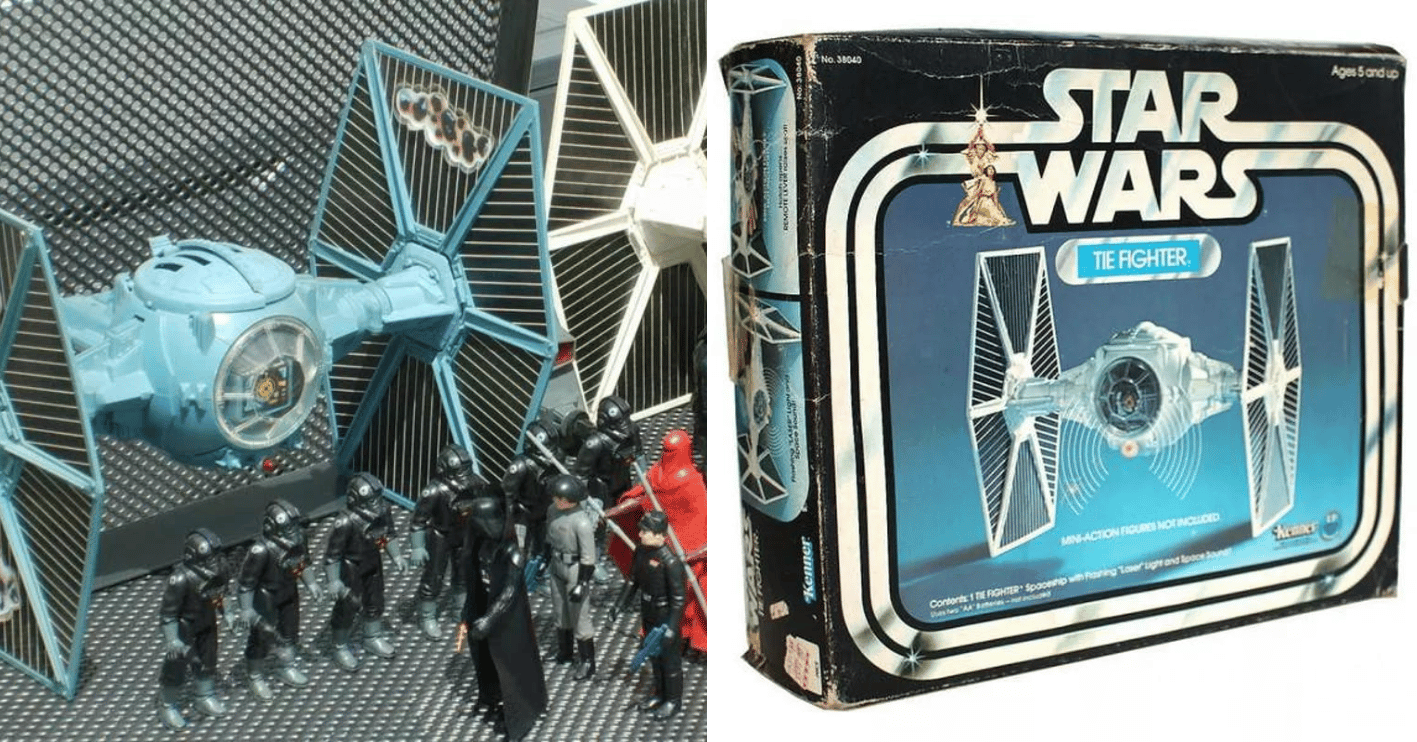 To make it easier for audiences to know who was piloting what vehicle during the Death Star trench climax of the first Star Wars movie, Vader’s TIE Fighter was equipped with cool curved wings. What you might not know is that in earlier drafts of the movie, Darth Vader’s TIE Fighter had a completely different design, not including the now-iconic curved wings.

Kenner released a toy based on these earlier designs, but an updated version more in line with the movie was quickly put out, thus skyrocketing the value of the original straight-winged TIE Fighter. These days, an original 1977 Vader TIE Fighter can sell for up to $4,000.