10 Most Overacted Movie Lines In History

It takes a lot to make a memorable movie moment. Sometimes, it involves great dialogue being delivered with panache and restraint. Other times, however, it’s when an actor throws caution to the wind and roars the lines for all they’re worth.

Even some all-time great movies feature instances of ridiculous over-acting which come close to slipping into self-parody – but if the actor manages to get it just right, such moments make the film all the more memorable. Here’s our pick of the most unforgettably over-the-top line deliveries in film history. 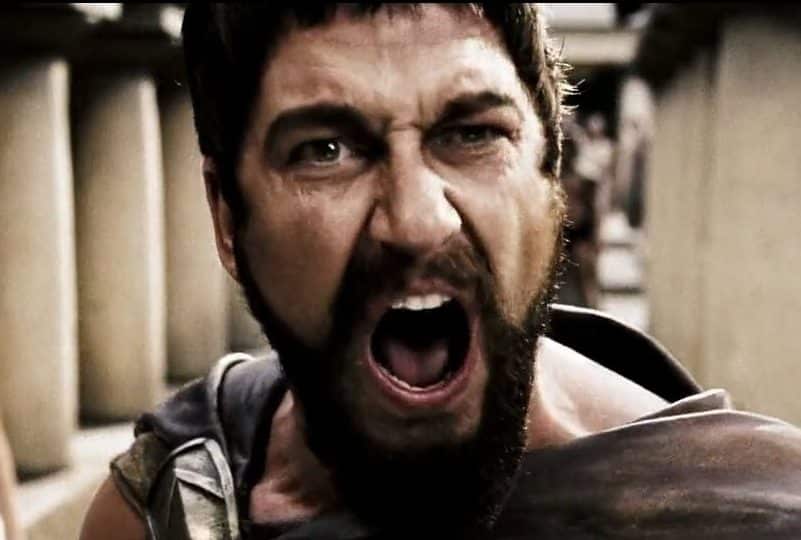 Any time we think of director Zack Snyder’s 2007 historical action epic 300, “this is Sparta” is invariably the first line of dialogue that comes to mind. Gerard Butler’s King Leonidas bellows these words at the top of his manly lungs in the face of Peter Mensah’s messenger of Xerxes, before booting the unfortunate soul to his death in a pit.

Butler’s performance helped launch him as one of the boldest and beardiest Hollywood action men of recent times. Unfortunately, it also inspired the unbearably awful parody film Meet the Spartans.

9. “I drink your milkshake!” – Daniel Day-Lewis in There Will Be Blood 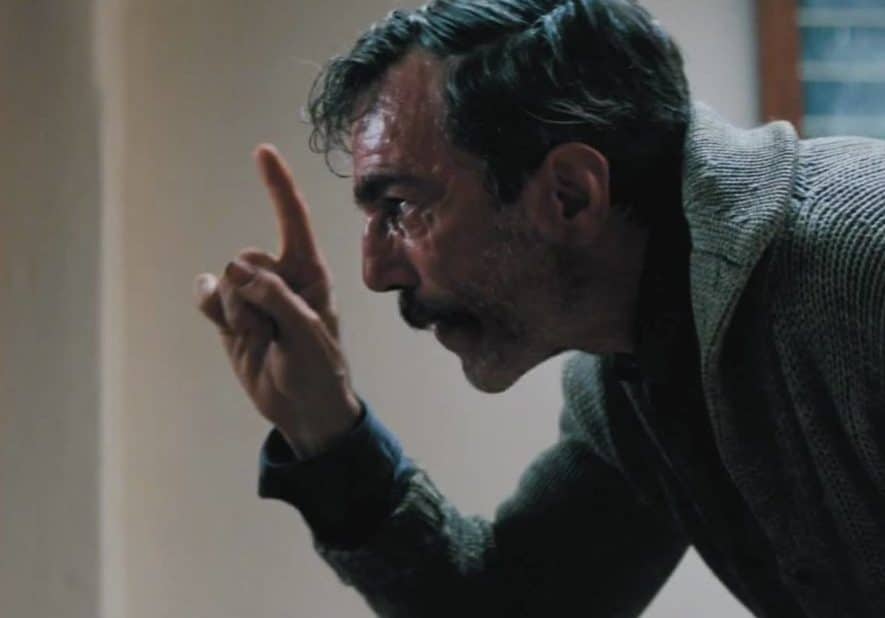 Writer-director Paul Thomas Anderson’s 2007 drama There Will Be Blood is widely acknowledged as a modern masterpiece, and no one complained when Daniel Day-Lewis‘ performance won him the second of his three Best Actor Oscars. That said, there’s no overlooking just how outrageously excessive Day-Lewis is in the film’s final scene.

The ageing, power-mad oil baron Daniel Plainview sadistically reveals to Paul Dano’s preacher Eli Sunday that he has been siphoning off Sunday’s own oil by using the analogy of straws into a milkshake, yelling “I… drink… your… MILKSHAKE! I drink it up!” and making loud slurping noises. 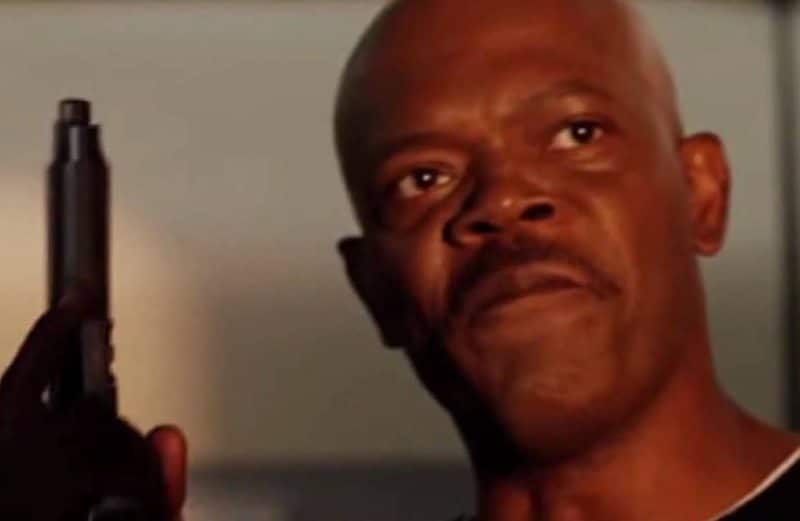 In the final act of 2006’s airborne creature feature Snakes on a Plane, Samuel L. Jackson‘s FBI Agent Neville Flynn roars the line the audience had been waiting the whole movie to hear: “I have had it with these motherf***ing snakes on this motherf***ing plane!”

Director David R Ellis’ gimmicky thriller gained notoriety for inspiring an overly enthusiastic reaction online in the run up to its release. This inspired the studio to put more money into the film, in order to shoot new, fan-pleasing scenes – including that famous line of dialogue. 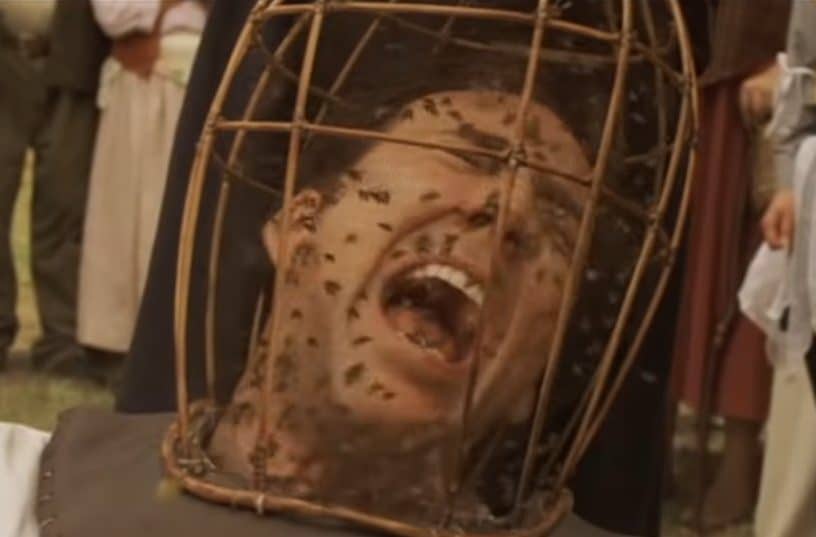 It would be pretty easy to put together a list of the most overacted moments in film history and include nothing but Nicolas Cage performances. However, for the sake of fairness, we opted to restrict our selection to just the one; and even by Cage’s standards, it doesn’t get much more OTT than 2006’s The Wicker Man, director Neil LaBute’s infamously absurd remake of the 1972 British horror classic.

Cage stars as a detective who grows ever more unhinged by his investigation of a remote pagan community. Things come to a head when he is served up as a sacrifice, his head strapped into a wicker cage filled with bees, prompting him to scream “not the bees, not the BEES! ARGHH! Oh, they’re in my eyes! My eyes! [Gargle, gargle, etc.]” 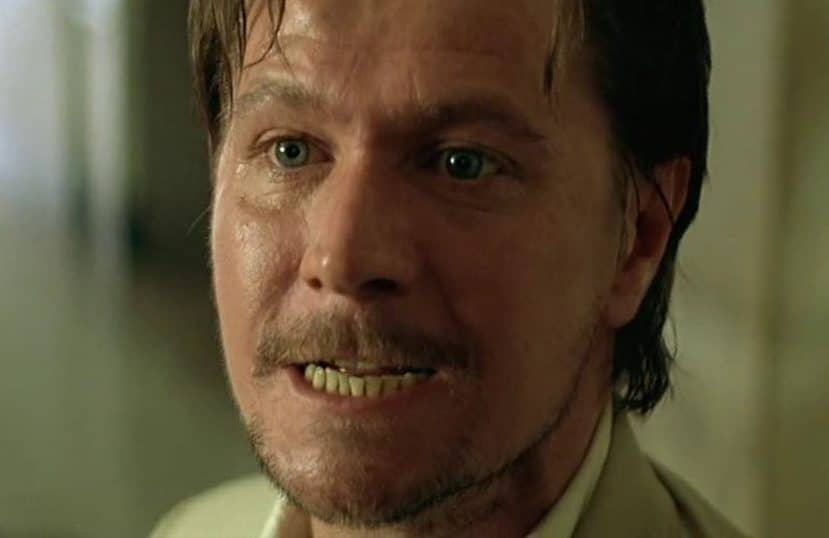 1994 action thriller Leon (aka The Professional) helped establish Gary Oldman as one of the greatest modern bad guy actors. His performance as Stansfield, a deranged and ultra-corrupt DEA agent who gets high on his own supply, was largely improvised – including in the moment when he sends in a SWAT team to take out Jean Reno’s expert hit man.

When OIdman roars at an underling to bring in “Everyone!”, the actor says he was simply messing around trying to give everyone on set a laugh, and didn’t anticipate that take being used in the final film.

5. “Maybe you shouldn’t be living here!” – Pierce Brosnan in Taffin 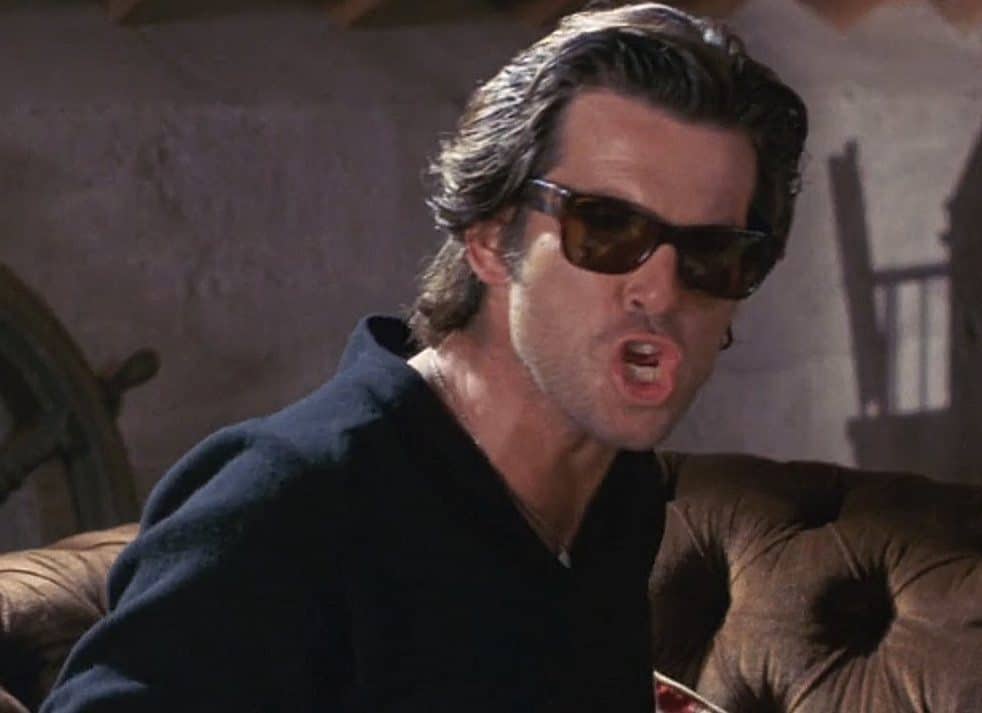 Before he was Bond, Pierce Brosnan took the title role in Taffin. Although this 1988 thriller was adapted from a series of bestselling novels, it seems likely the film would be largely forgotten today were it not for one moment: the scene in which a sunglasses-clad Brosnan very loudly suggests to Alison Doody, “maybe you shouldn’t be living here!”, drawing out that final word to several syllables.

In 2011, this scene became a popular meme, when it was popularised by comedians Adam and Joe after they discussed Taffin (and this scene in particular) on a BBC podcast.

4. “Where’s the trigger?” – Christian Bale in The Dark Knight Rises 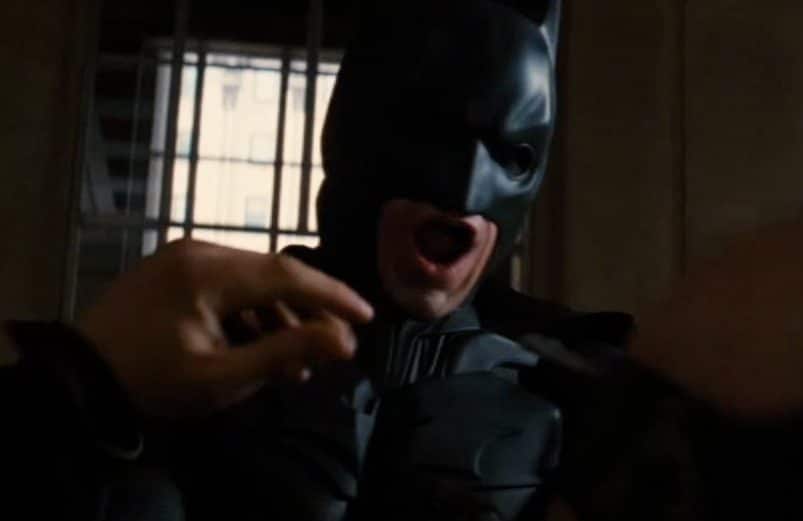 Way back in 1989, Michael Keaton introduced the concept of Batman having his own voice, distinct from that of his alter-ego Bruce Wayne. Every subsequent Bat-actor has come up with their own variation on this, but none to date have been so extreme as that of Christian Bale. In all three instalments of Christopher Nolan’s Dark Knight trilogy, Bale’s guttural growl managed to raise a few eyebrows.

However, Bale really saved the best for last, taking his Bat-roar to a new level in his final confrontation with Tom Hardy’s Bane in the third act of 2012’s trilogy closer The Dark Knight Rises. Bruce repeatedly punches Bane whilst roaring (with somewhat slurred speech), “Where’s the trigger? Where is it? You’d never give it to an ordinary citizen!” 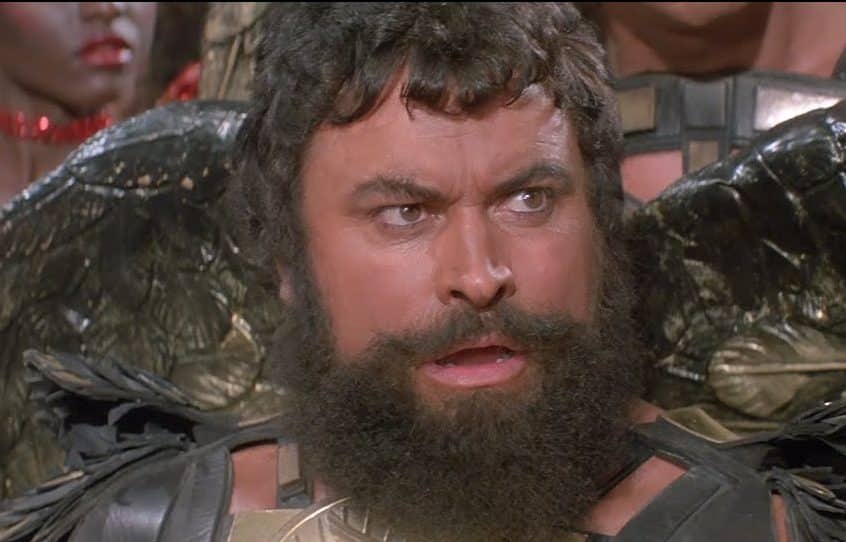 There haven’t been many times when a fairly minor supporting character has stolen the entire movie as effortlessly as the hirsute British thespian Brian Blessed does in Flash Gordon. Blessed’s entire performance as the Hawkman Prince Vultan is turned up to 11, but one particular moment stands out: on learning Sam J Jones’ Flash survived his execution, the stunned Vultan gasps, “Gordon’s alive?!”

Blessed (who’s famously every bit as melodramatic in person as he is on screen) says this line from the 1980 camp classic is the one most fans want to hear from him in real life. The actor claims he has been asked to repeat it by Queen Elizabeth, as well as the commander of a Russian submarine he met in the Arctic. 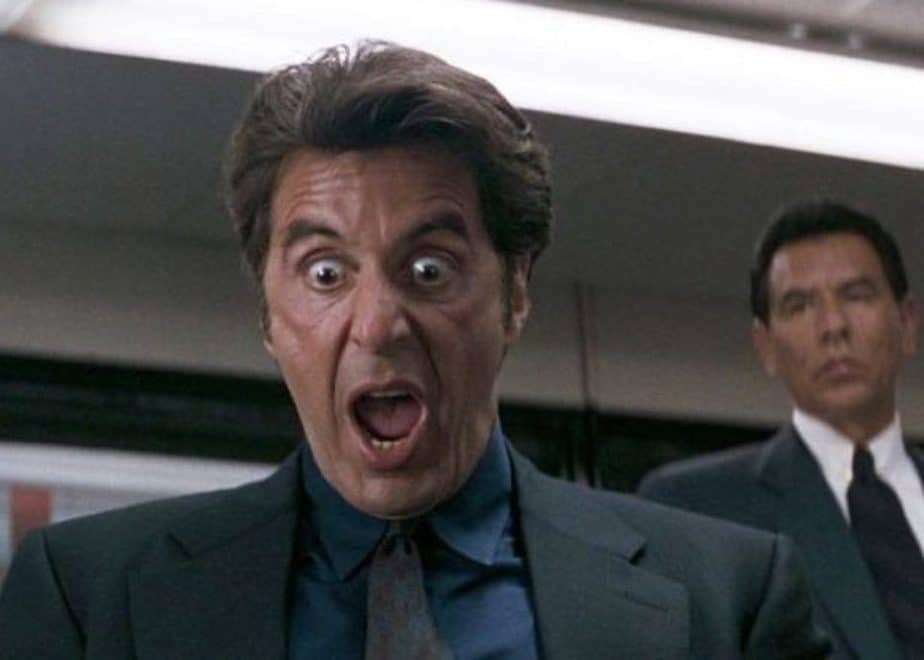 Al Pacino is another one of those great actors who, as respected as he is, remains notorious for going ridiculously over the top on a regular basis. Arguably no moment encapsulates that better than the scene in 1995’s Heat where Pacino’s Detective Hanna is grilling Hank Azaria’s Alan, the lover of bank robber’s wife Ashley Judd. When discussing Judd’s Charlene, Hanna unexpectedly enthuses, “she’s got a GREAT A**! And you got your head all the way up it!”

Pacino’s outlandish line delivery was improvised: watch his lips, and it’s clear he was originally going to say “big” rather than “great.” Azaria’s stunned reaction is entirely genuine – and props must be given to supporting actor Wes Studi, who stands behind Pacino with a completely straight face, as though what’s happening is nothing out of the ordinary. 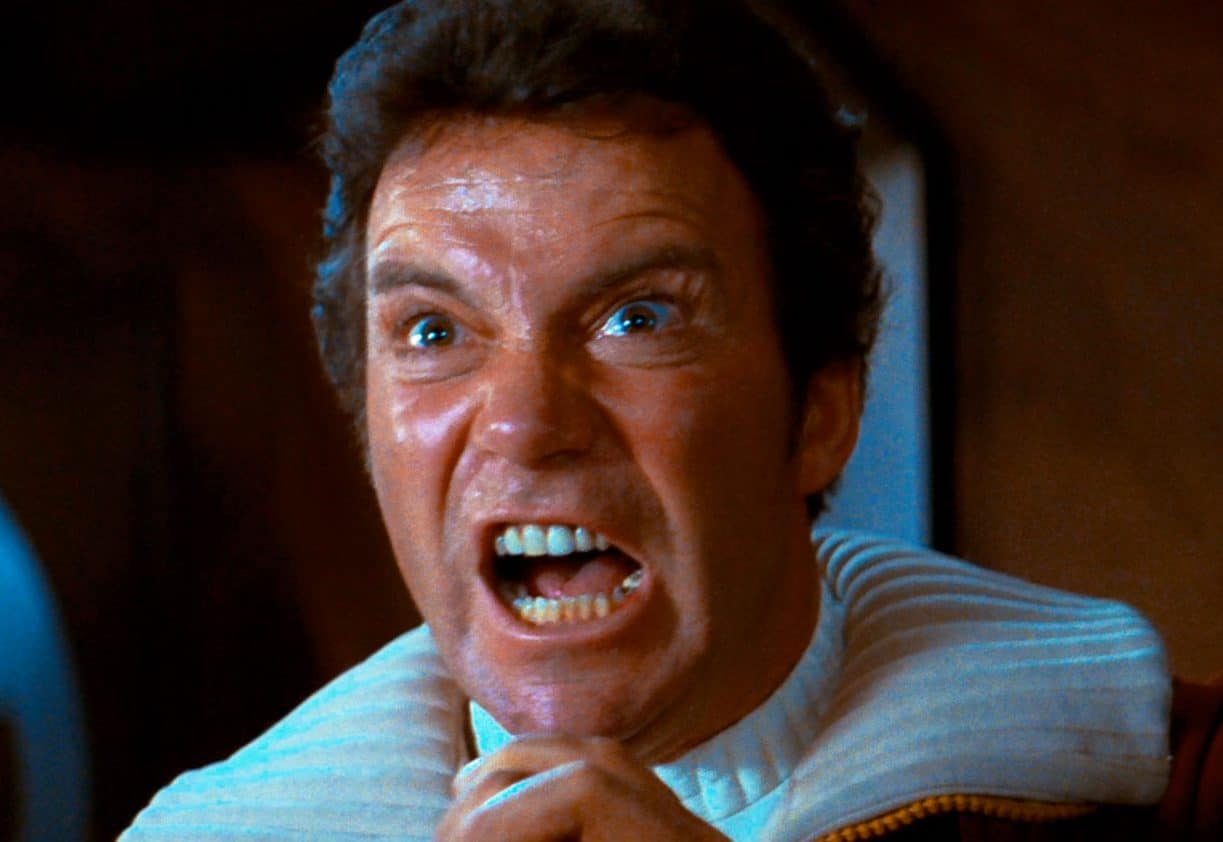 When all is said and done, there can be only one king of the ridiculously over-the-top one-liner, and that has to be the great William Shatner. Pretty much everyone agrees that long-running sci-fi franchise Star Trek reached its pinnacle with 1982’s Star Trek II: The Wrath of Khan – and everyone, Trekkies and non-Trekkies alike, remembers one specific moment from that film above all.

As Ricardo Montalban’s interstellar supervillain Khan coolly informs Shatner’s Captain Kirk over the comms of his intention to leave the crew of the Enterprise to die, Kirk becomes so enraged that his face literally wobbles before he roars in fury, “KHAN!!”  This has long since become the most imitated moment in Star Trek history.