After being drawn together by an intense physical attraction, Rourke and Otis were ultimately pushed apart by addiction and mental health issues. At one point arrested for spousal abuse, Rourke more than once wielded a gun at Otis, while on one occasion an accident with one of Rourke’s guns resulted in Otis being shot.

When Mickey Rourke first came to Hollywood in the late 1970s, a huge buzz quickly grew. The handsome, charismatic newcomer was a recent graduate of New York’s prestigious Actor’s Studio, and his performances in the likes of Diner and The Pope of Greenwich Village attracted huge acclaim, although the films weren’t big hits.

1986 was also the year that Carré Otis broke big in modelling. Aged just 18 at the time, Otis signed with New York’s Elite Model Management and was soon a popular fashion magazine cover model, appearing in the likes of Elle, Vogue and Cosmopolitan. However, there was trouble behind the scenes for Otis early on.

A teenage runaway, Otis had already been through one abusive relationship and was raped by her own agent at 17. To make matters worse, pressure to stay thin during her rise to modelling fame saw Otis develop both anorexia and a heavy cocaine habit.

When they met, Otis felt “an immediate familiarity [to Rourke]. It was sort of recognition of somebody who I knew there was an incredible charge with and energy between. So in a way it was that ‘dangerous at first sight’ [feeling].”

Rourke was on the rebound at the time. He had been married to actress Debra Feuer since 1981 but they split not long before Wild Orchid was made. Speaking about her ex-husband in 2009, Feuer said her marriage to Rourke “died of neglect. Mickey just stopped trying. He wasn’t around and he wasn’t prepared to come home and try marriage therapy.”

Fame had changed Rourke, leading him to drinking and drugs, but Feuer says he had remained faithful. “Mickey was always full of bravado, playing the bad boy sex symbol. But the reality is totally the opposite. He was monogamous, I think, right up until we separated and he met Carré.”

Rourke and Otis were quickly besotted with one another. As news of their relationship reached the gossip columns, rumours spread that their love scenes in Wild Orchid were not simulated, something that both actors denied.

Rourke’s ex Debra Feuer marks Rourke’s romance with Otis as the time “when he started to completely self-destruct.” Of Otis, Feuer says, “She had issues with drugs but she was so beautiful that Mickey wanted to be a part of her world. That’s when the plastic surgery started.”

Rourke has long been infamous for how heavily his face has changed over the years due to excessive cosmetic surgery, and Feuer says this began on Wild Orchid.

“He’ll kill me for saying this but he wanted the part in one film so badly that he got cheek implants. He told me he was swollen because he’d had his molar teeth removed. But I knew that was untrue – he didn’t have any molars to take out.”

In the aftermath, Otis took no further film roles, focusing instead on her modelling, whilst Rourke’s subsequent films also bombed. This led Rourke to a somewhat unexpected move: he announced that he was giving up acting in order to return to his earlier passion, boxing.

After almost three years dating, Rourke and Otis were married in 1992 – although as Otis has since admitted, the warning signs were already there from the way Rourke proposed. As she reveals in her memoir Beauty Disrupted, Rourke told Otis that he would commit suicide using a sword if she refused to marry him.

Otis sadly reflects, “There was a [red] light in the back of my head, but the problem was, nobody had told me ever that I had the right as a woman to say no about anything. Did I have a gut feeling that this was totally inappropriate? Yeah, but like so many times, I just shoved it aside and I just needed to obey.”

Part of Otis’ obedience to her new husband was giving up work. Much as he had with first wife Feuer, Rourke insisted that his new wife step away from her career. Considering the levels of fame and money commanded by the most successful models of the time (Cindy Crawford, Naomi Campbell, Claudia Schieffer etc), walking away from modelling was quite a sacrifice on Otis’ part.

Perhaps inevitably, bad times ensued. Their honeymoon was barely over when, according to Otis, a squabble in Miami almost turned lethal. “He wanted to go out, and I didn’t want him to go out, and there was a gun, and that was placed to my head. It wasn’t with the intent – although it might sound insane, obviously – to kill me, [but] it was just a moment of definition of what the relationship was… I was a kid, in over my head.”

Then in 1994, barely two years into their marriage, Rourke was arrested on charges of spousal abuse after allegedly beating Otis in the office of their publicist. Rourke denied the charges (which were ultimately dropped), much as he would later deny further claims of domestic violence made in Otis’ memoir.

Things reached a new low when Rourke hid a loaded gun in Otis’ handbag without telling her. When Otis unknowingly dropped the bag, it went off, shooting her. “I was hit with a .357 bullet. It was about two inches from my heart. It exited through my shoulder. I was really unbelievably lucky that it didn’t hit a bone.” Surprisingly, no charges were ever filed over this incident.

By the mid-90s, Rourke returned to acting, but major roles proved elusive. His bad reputation left many filmmakers reluctant to hire him, and further cosmetic surgery (some due to facial injuries incurred as a boxer) left him almost unrecognisable. Otis, too, was deteriorating. In her emotional turmoil she used drugs even more heavily, moving from cocaine to heroin.

Perhaps in the hopes of saving both their relationship and their respective careers, Rourke and Otis made another movie together, 1997’s Exit in Red. This also bombed, and not long thereafter their marriage ended in divorce. 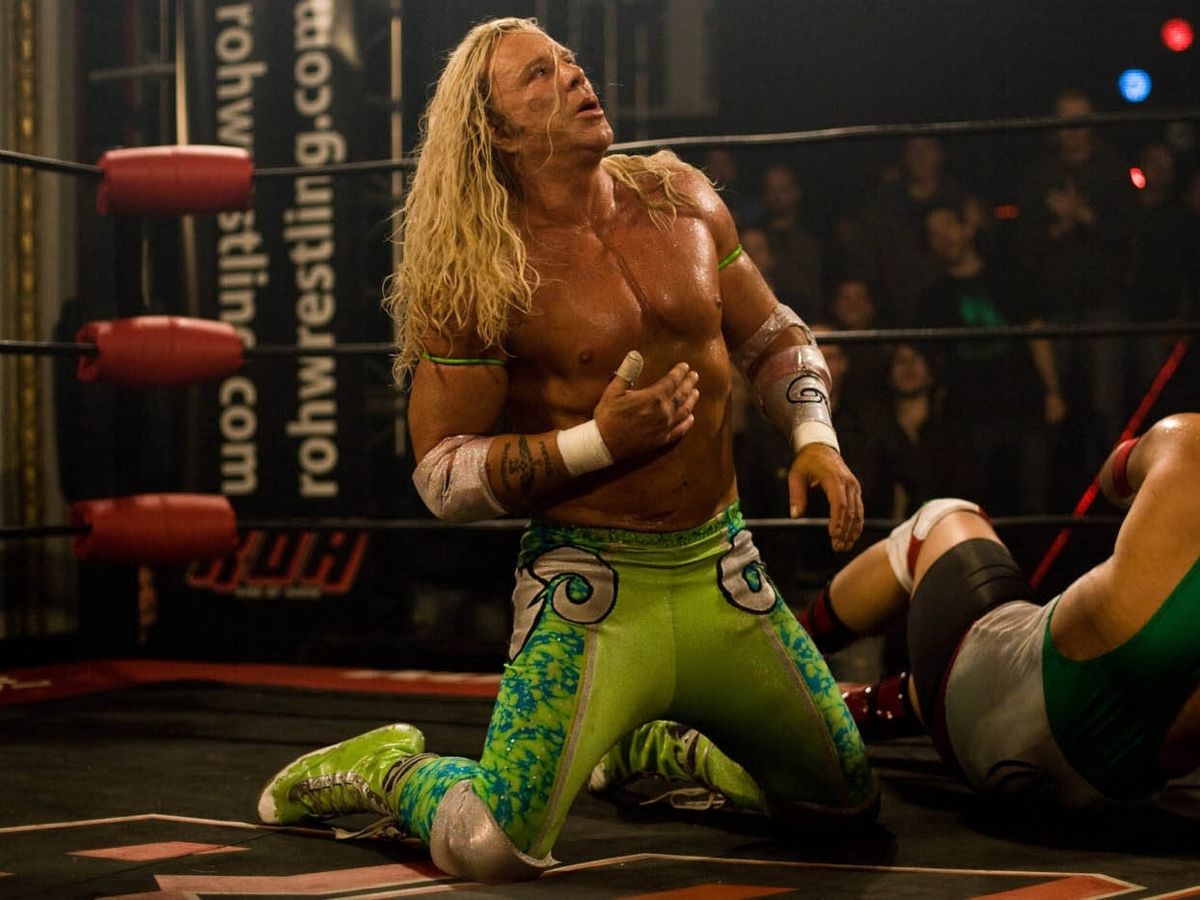 Otis returned to modelling, and slowly but surely Rourke’s career heated up again, peaking with his widely praised, Oscar-nominated performance in 2008’s The Wrestler. Alas, Rourke’s bad boy attitude soon saw him fall out of favour in Hollywood again, and in recent years he has mostly appeared in low-budget direct-to-DVD movies.

Rourke admits that it was hard to get over Otis, calling their relationship “The best-worst-goddamn-thing that ever happened to me. We met and it was thunder and lightning… Me and Carré were incredible together, but also incredibly destructive.”

Such was his jealousy and possessiveness, on learning years later that Otis had a new boyfriend, Rourke attempted to cut off his own finger. “I almost chopped it clean off… I found out my old lady [Otis] was seeing someone else. I thought that if I left the house I would have killed that piece of s**t. They put it back on in the hospital. But you have to be pretty upset for something like that to happen.”

Over the years Rourke had insisted he still loved Otis, remarking in 2005, “I’d have her back in a heartbeat… I’ve got her name tattooed on my arm. And her face right here on my shoulder. I ain’t taking them off, ever.”

In 2009, Rourke admitted to still having the tattoos of Otis, but had moved on to a new relationship with Russian model Anastassija Makarenko (they’ve since split). “I’m over [Otis] finally. I don’t love her.

“It’s funny having a stranger’s name tattooed on your arm. I thought about having it removed, yeah, but I think in a way that would be almost like she’s won. I’ve never really told anyone this, but in a way that’s why I wanted to come back so f***ing hard. To show her. That was my momentum, my engine.”

Otis, meanwhile, turned her life around, managing to overcome her eating disorder and drug addiction. In 2005 she married chemical engineer Matthew Sutton, with whom she has two children. She hasn’t acted in over 20 years (last appearing in 2001 war drama Under Heavy Fire), and now works primarily as a lobbyist against exploitation in the modelling field, as well as being an ambassador for the National Eating Disorders Association.

Looking back on her relationship with Rourke, Otis reflects, “There was love and there was a lot of insanity… We were both from really dysfunctional backgrounds and we both had the perfect ground to feed that dysfunction because we didn’t have tools and I was a kid! I was a young person and obviously greatly influenced by one of America’s greatest actors at that moment. It was really hard to maintain perspective.”