Melanie Griffith and Steven Bauer had vastly different routes to fame, but in the 80s they came together to form one of Hollywood’s hottest couples. Following a whirlwind romance, they married after a few months of dating, then rose to fame in starring roles in two different Brian De Palma movies: Scarface and Body Double.

The marriage fell apart abruptly. Today, Griffith and Bauer remain friends, the pair forever bonded in part by the addiction issues that plagued their early years. Back in the mid-80s, however, despite similar career trajectories and the child they shared together, Griffith and Bauer’s relationship blew up suddenly, with each star remarrying within a year of their divorce. What changed for these former star-crossed lovers?

Born in 1957, Melanie Griffith is the daughter of the actress Tippi Hedren and advertising boss Peter Griffith. After her parents divorced, Melanie split her childhood between New York and California, and she fell in love with acting as a teenager. Her earliest roles were in The Harrad Experiment (1973) and Night Moves (1975).

While filming The Harrad Experiment, the then 14-year-old Griffith met and started a romantic relationship with the then 22-year-old Don Johnson. The age difference attracted little concern at the time, and with her mother’s blessing, Melanie moved in with Johnson. They married in 1976, once Griffith turned 18.

Johnson was reportedly unfaithful, however, having spent the night before their wedding with model Marjorie Wallace. The couple divorced just six months later, and Griffith went on to have a few wild years of her own. From 1976 to 1979, Griffith filmed Roar, an ‘adventure comedy’ starring herself, Hedren and Hedren’s real-life menagerie of big cats. Considered one of the most dangerous ever, the Roar shoot saw Griffith nearly lose an eye in one attack by a lioness. 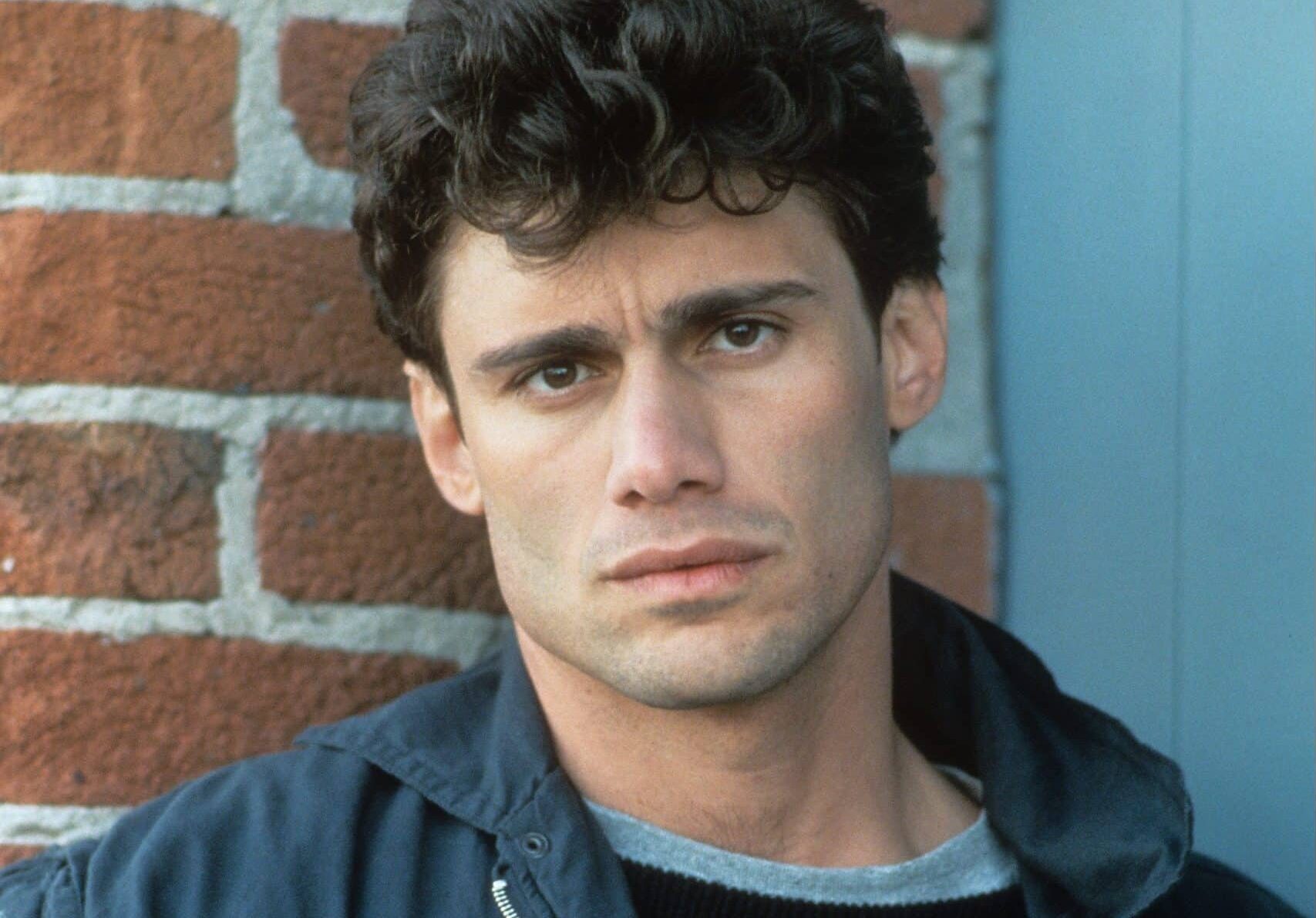 Steven Bauer was born on December 2, 1956 in Havana to a schoolteacher and a Cubana Airlines pilot. In the 1930s, his Jewish grandfather had fled from Germany to Cuba, escaping Nazi occupation. On Independence Day, 1960, it was three-year-old Steven’s turn to flee, the family emigrating to Miami, Florida after Fidel Castro’s revolution.

Born Esteban Ernesto Echevarría Samson, once in the US, Bauer changed his first name to Steven in order to conceal his Cuban origins. As he took up acting, he took the stage name Steven Bauer, with Bauer the surname of his German great-grandmother. “It was a real albatross,” Bauer has said of his birth name. “It immediately said, ‘I am different. I’m not an American.'”

After studying at Miami Coral Park High School, Bauer trained in acting at the University of Miami, where he became friends with fellow star-to-be Ray Liotta. Bauer’s earliest roles were in the 70s sitcom ¿Qué Pasa, USA? and the miniseries From Here to Eternity. In the early 80s, he landed a role in the 1981 TV movie She’s in the Army Now.

Credited as ‘Rocky Bauer’ (Rocky is his lifelong nickname), Bauer played the role of Nick Donato in the military comedy, also starring Kathleen Quinlan and Jamie Lee Curtis. With Melanie Griffith leading the production in the role of Pvt. Sylvie Knoll, the She’s in the Army Now set was where Bauer met Griffith for the first time.

Griffith was immediately struck by Bauer’s “intellectual” approach to acting and his interest in her professional development. They began dating and moved into Ray Liotta’s apartment in New York. (In return, Griffith lent Liotta her home in Malibu and he began a relationship with Griffith’s best friend Heidi von Beltz.)

Bauer and Griffith revelled in their new life together, although they initially had little money to spare. Bauer encouraged Griffith to join him in studying acting with Stella Adler, but Griffith was “too shy” to attend classes.

“It was wonderful,” Griffith later reflected on that period. “We lived on Campbell’s soup and knishes and fried chicken from the deli downstairs. We took the subway everywhere or walked, because we were flat broke and couldn’t afford cabs. Steven worked as a messenger and I collected unemployment and transcribed Stella’s class tapes to pay our tuition.”

The relationship moved fast. On May 1, 1982, Griffith and Bauer wedded at St Patrick’s Cathedral in New York City. Von Beltz was Griffith’s maid of honour. They then relocated to West Hollywood to pursue bigger roles – which they each promptly found.

First, Bauer was cast as Manny Ray in the 1983 crime thriller Scarface, which would go on to be his defining role. Griffith attended the Los Angeles premiere with her mother Tippi, who described the movie as “too brutal”. While Scarface brought him fame, Bauer has said the film’s early negative reviews damaged his reputation. “Everyone associated with Scarface was a leper,” he later said.

“I’m in control of my life now, and I feel good about it,” Griffith commented on her new life with Bauer in Hollywood in 1984. She also had strong feelings about how to raise children as a celebrity. “I don’t know if Hollywood is a good or bad place – it’s up to the individual. Rocky and I don’t plan to raise our kids here, though.”

In Los Angeles on August 22, 1985, Griffith and Bauer welcomed their son Alexander Bauer into the world – the first child for either of them. In the same year, Bauer joined a band called The Front. He performed vocals alongside three former members of The Knack, of My Sharona fame.

Bauer and Griffith remained close friends with Ray Liotta throughout their relationship, with Griffith helping Liotta to get the role of her on-screen husband in Jonathan Demme’s 1986 comedy-drama Something Wild.

The pair made other famous connections. They were friends of the pop duo Hall and Oates, and were seen mingling with other Hollywood types including Warren Beatty. But as their fame rose higher, behind the scenes, Griffith and Bauer became less and less happy as a couple.

Sources have claimed that Bauer cheated on Griffith during their relationship. In her autobiography, actress Hunter Tylo recalled a chance meeting with Bauer in a restaurant in the mid-80s. She was dining with her husband-to-be Michael Tylo, while Bauer dined with an unknown woman. Smiles and pleasantries exchanged between Bauer and Hunter were enough to throw Michael into a jealous rage.

Bauer also began suffering from drug abuse in the 80s, according to an insider quoted by Radar Online, while Griffith’s issues with intoxicants only continued. Early in her marriage to Bauer, Griffith was sober and described herself as a “recovering alcohol-drug addict”: “Sure, I used to do drugs, I used to drink. I was wild. I could do anything I wanted, and I did,” she said in 1984.

By the mid-80s, Griffith was once again struggling with alcoholism and substance abuse, which she later attributed to childhood stresses. “I was never loved unconditionally,” Griffith said to Vanity Fair in 1994. “[Drugs] give you a feeling, a physical sensation…I was medicating myself so I could escape my pain and insecurities.”

Griffith’s addiction issues put a strain on both her marriage and her career, although Griffith has specified that her alcoholism kicked in once her relationship with Bauer was crumbling. Griffith and Bauer went their separate ways in 1985, with their baby Alexander remaining with his mother.

On the set of Working Girl in 1988, Griffith developed a crush on her co-star Alec Baldwin, who rejected her advances. “Alec Baldwin is handsome and charming,” she later told The Hollywood Reporter. “But he wouldn’t go there with me. I was like, ‘Oh come on, have a romance with me!’ But no, Alec said, ‘I can’t do this with people I work with.’ He’s a sweetheart.”

One day, director Mike Nichols shut production on Working Girl down when Griffith showed up to the set high on cocaine. (Griffith was made to pay the day’s $80,000 production costs out of her own pocket.) Three weeks after filming wrapped, Griffith checked into a rehabilitation programme at the Hazelden Foundation in Minnesota.

During her stay at Hazelden, Griffith received an unexpected message from her ex-husband Don Johnson, who offered support. Griffith and Don Johnson immediately rekindled their relationship, and by early 1989 she was pregnant with their daughter Dakota (a future fashion model and star of the Fifty Shades franchise). Griffith and Johnson decided to marry once again – only Griffith was still technically married to Bauer.

“Steven and I didn’t even realise we actually needed to get divorced,” Griffith told SiriusXM Entertainment in 2016. “[We] pretty much had nothing. We had Alexander. And we didn’t really give a s*** whether we were divorced or not.

“So when Don and I got back together a second time, I realised that I hadn’t even divorced Steven in order to marry Don, and I was pregnant with Dakota. So I had to quickly get divorced from him and make it all legit – for Dakota, mostly.” (Griffith later said her second marriage to Johnson before Dakota’s birth was for the reason of “raising legitimate children – which doesn’t mean anything any more”.)

Griffith viewed Dakota’s birth as a romantic twist of fate. “[Don and I] were imprinted on each other,” she has said. “It was sort of a natural karmic thing for us to get back together and to have Dakota. She was meant to come into the world, if you think about it.”

Don Johnson and Griffith remarried in 1989, the same year that she signed divorce papers with Bauer. Bauer, meanwhile, married actress Ingrid Anderson that same year, with whom he had a second son: Dylan Bauer, born 1990.

Bauer’s marriage to Anderson would last two years, and was followed by marriages to Christiana Boney and Paulette Miltimore. He later attracted media attention for dating Lyda Loudon, a journalist nearly 40 years his junior.

Griffith, meanwhile, split once more from Don Johnson in 1996, and was later married to actor Antonio Banderas, from 1996 to 2015. In addition to Dakota Johnson and Alexander Bauer, Griffith has one daughter with Banderas: Stella del Carmen Banderas, born 1996.

Griffith remains close friends with all of her ex-husbands, Bauer included. In 1998, she was involved in an intervention that sent Bauer to a rehabilitation centre, and she supported him in alcoholism rehabilitation after a 2016 relapse. “Melanie recognised that if Steven didn’t get help fast, he was going to die,” one insider commented.

Griffith herself has suffered various relapses over the decades, including a 2009 admission to rehab over a narcotics addiction that reportedly stemmed from a skiing accident. She later invited Bauer as her date to the premiere of her 2013 movie Dark Tourist.

In 2020, Griffith published photos featuring each of her ex-husbands on Instagram, including Bauer, adding the caption: “When @thestevenbauer and I were married and madly in love. I was 26 years old and total trouble. Those were the days, my friend.”

Bauer has been more reticent about past relationships, but he has commented on his lifelong learnings about love itself. “It’s give and take,” he said in 2015. “You have to understand and respect each other as human beings, and remember that we’re fallible and that we make mistakes, but we learn from mistakes.”