The Mad About You/Friends Connections You Never Noticed

90s TV comedy sensation Friends remains so well-loved to this day, it’s easy to forget that it wasn’t the only successful sitcom of the era. While Friends wound up being more popular, fellow 90s NBC comedy series Mad About You hit screens first and was successful enough to go on to share a comedy universe with Friends.

Bonded by Mad About You writer-producer Jeffrey Klarik and his partner, Friends co-creator David Crane, Mad About You and Friends had a connection in Lisa Kudrow’s Ursula, a Helen Hunt Friends cameo and an ambitious 1994 crossover episode event known as ‘Blackout Thursday’. 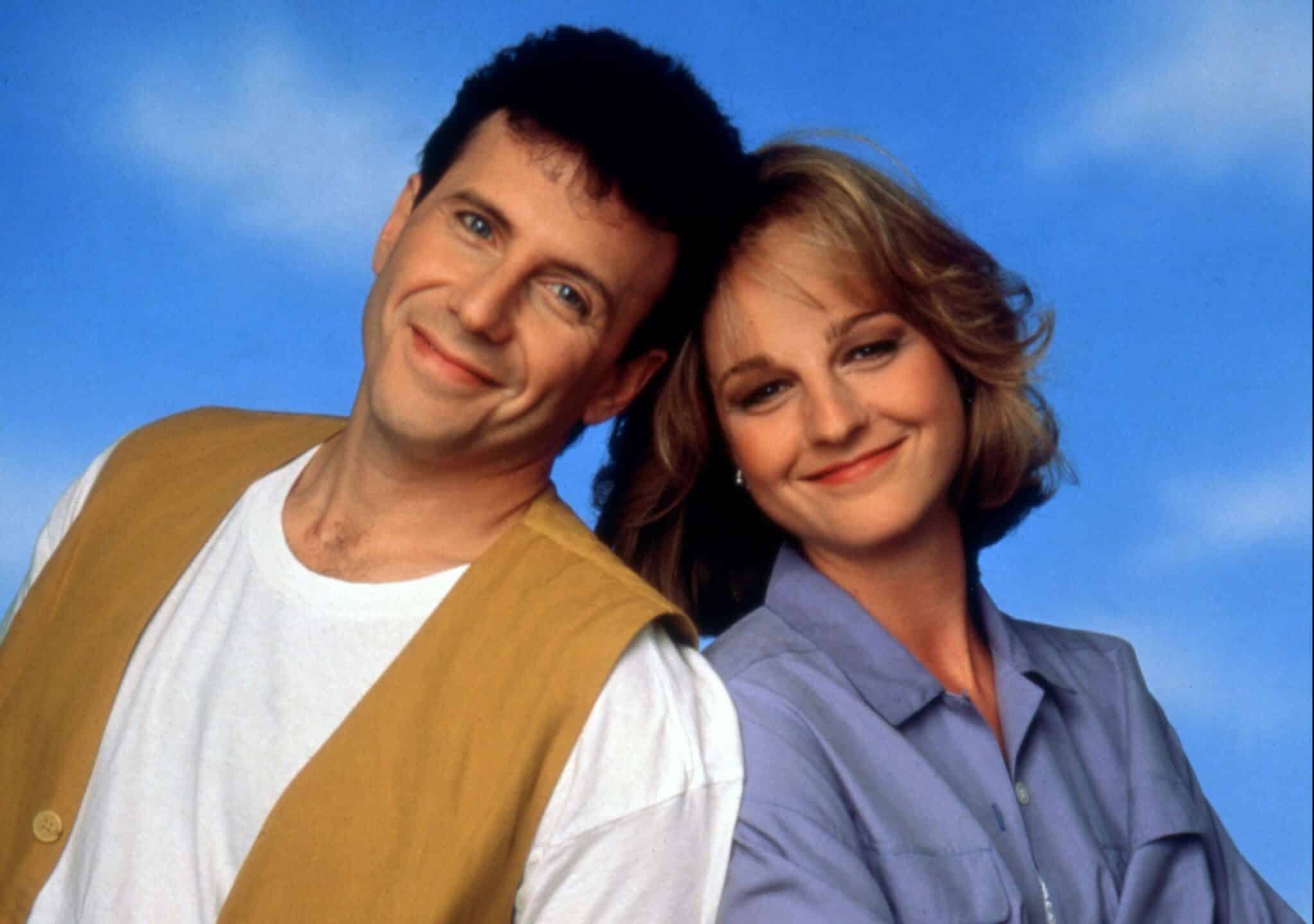 Mad About You premiered on NBC in September 1992, starring Paul Reiser (also the show’s co-creator) and Helen Hunt as a newlywed couple living in New York City. One of the producers and writers on the show was Jeffrey Klarik, the partner and future husband of another sitcom writer, David Crane, who along with Marta Kauffman would go on to create Friends.

Mad About You often featured scenes in a bar called Riff’s, where Reiser’s Paul and Hunt’s Jamie would be served by an absent-minded waitress named Ursula Buffay, portrayed by a then little-known actress named Lisa Kudrow.

Reflecting on landing the job, Kudrow recalls she got a “last minute” call to come in at barely an hour’s notice for what was meant to be a one-off bit part, but “by the end of the week, [producer] Danny Jacobson said, ‘You’re really funny’ and ‘Would you be OK if we wrote you into five more episodes?’”

The role of Ursula become a regular gig for Kudrow, who ultimately played the role in 24 episodes of Mad About You – more than she would play the character when Ursula was carried over to Friends. 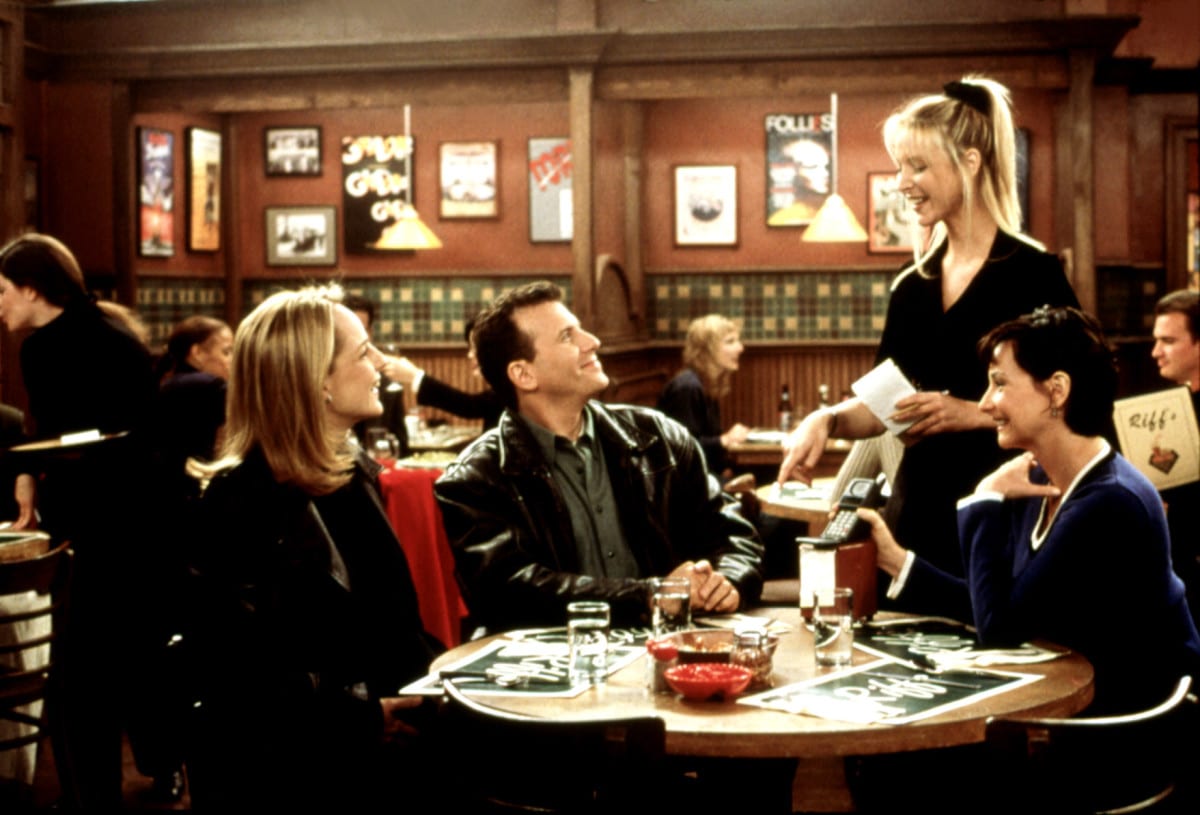 Whilst Mad About You was in its second season, Kudrow was among the many actresses up for one of the lead roles in another new sitcom at NBC. Friends, whose first episode aired in September 1994, would take NBC’s 8.30pm slot on Thursday nights, immediately after Mad About You which aired at 8pm, and immediately before Seinfeld at 9pm.

When Kudrow landed the Friends role of Phoebe (beating contenders including Ellen DeGeneres and future Will & Grace actress Megan Mullally), the actress thought, “Oh good, this is on NBC too, so maybe they’ll let me stay on Mad About You… I like being on Mad About You and I don’t want anything to jeopardise my role.” 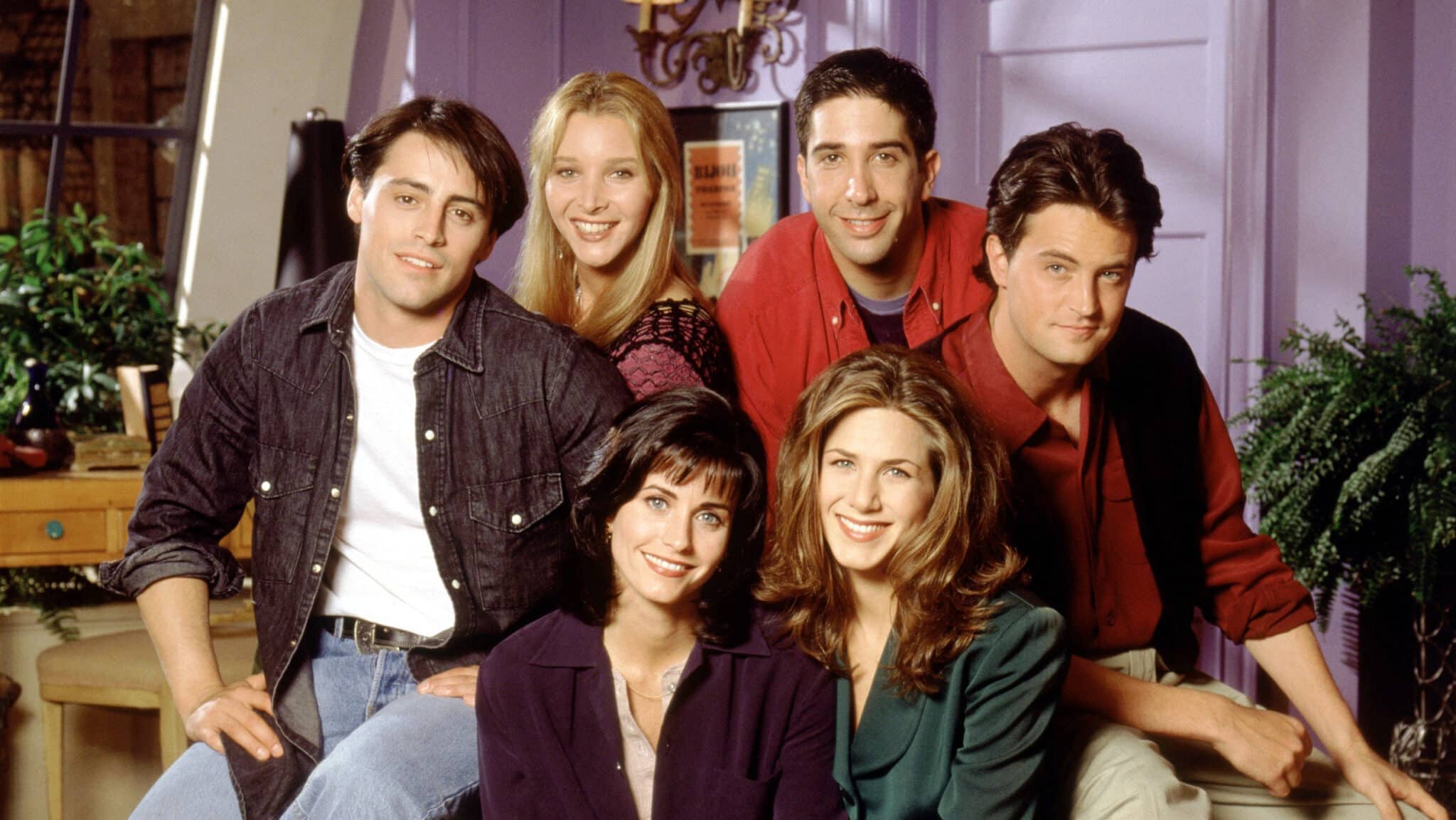 Appearing on both shows proved impractical, as Kudrow’s shooting schedule for Friends didn’t allow her the time. However, as Kudrow’s performance as Ursula on Mad About You had informed the decision to cast her as Phoebe, the Friends showrunners hit upon a fun idea: what if the two characters were identical twin sisters?

Friends co-creator David Crane recalls, “My husband Jeffrey was on Mad About You as a writer. We had to go to Danny Jacobson and Paul Reiser to get their permission, and amazingly because of that relationship… they were incredibly generous and let us do it, which is nuts. I wouldn’t let anybody do that with a character on our show!” 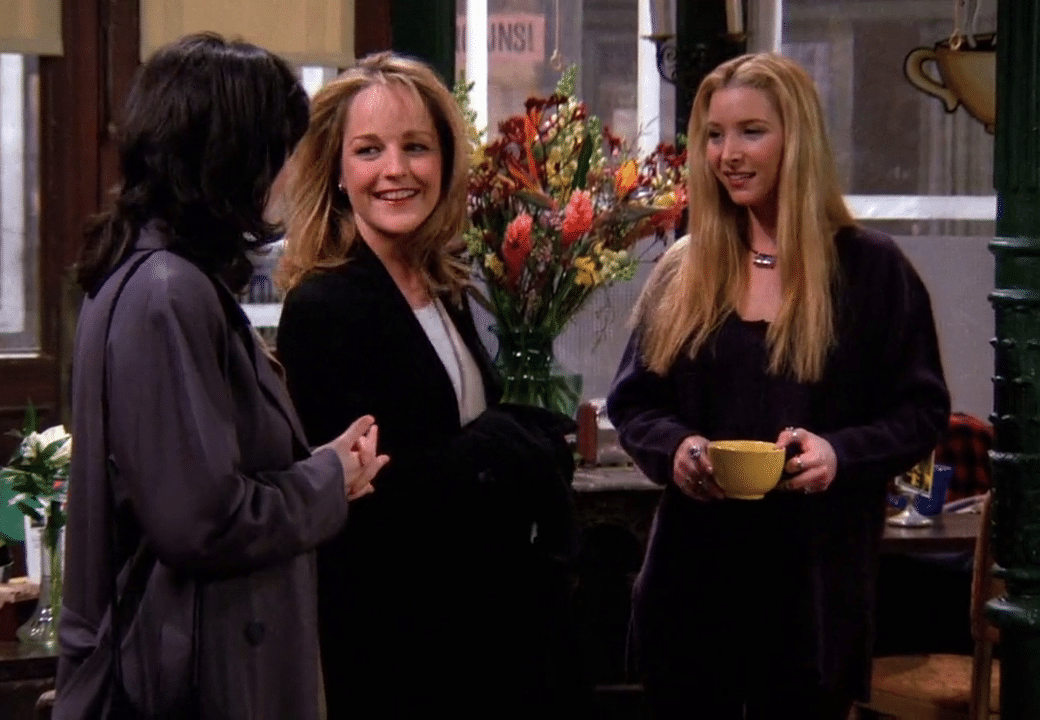 Jamie and Leila on Friends

So it was that the 16th episode of Friends (The One With Two Parts, Part 1), saw the introduction of Mad About You’s Ursula on Friends, with Lisa Kudrow appearing in dual roles as both Buffay sisters.

On top of this, the episode also featured guest appearances from two Mad About You characters: Helen Hunt’s Jamie, and Fran Devanow’s Leila, who meet Phoebe and mistake her for Ursula. From that point on, Ursula became an occasional recurring character on Friends, appearing in a total of eight episodes across the show’s ten-season run.

Friends producer and director Kevin S Bright remarked that Kudrow “really did not have a good time” shooting the scenes in which Phoebe and Ursula interacted, due to the use of a body double: “those scenes were a little bit tricky to shoot. But it ended up being a lot of fun when you put it together.” (Curiously, the double in question was Kudrow’s own sister Helena.) 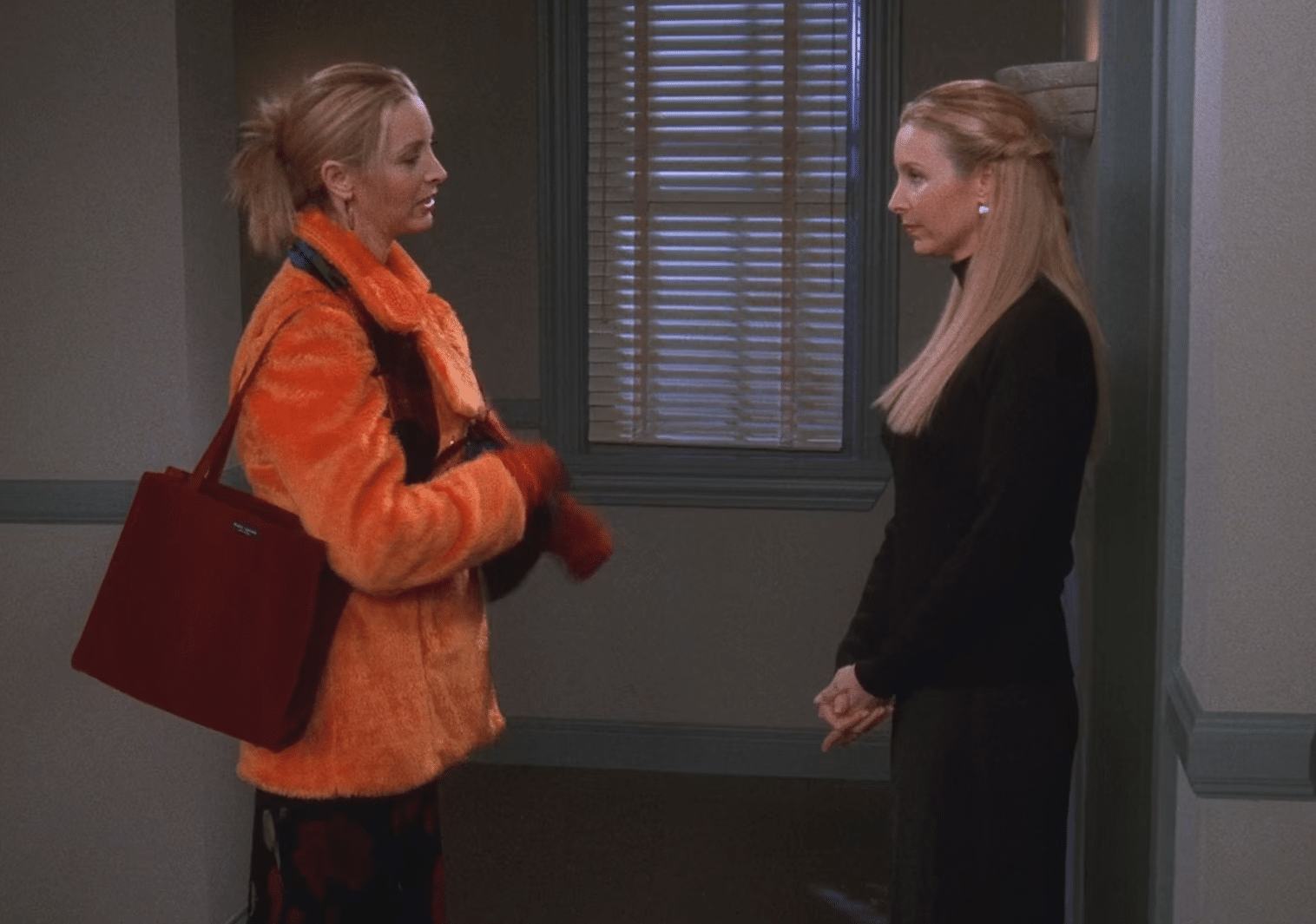 Eventually, they also found time for Kudrow to reprise the role of Ursula on Mad About You; when Reiser’s Paul remarks that he hasn’t seen for a while, Ursula replies that she’s been hanging out with ‘friends’.

Ursula even appeared in the last episode of Mad About You, in which it was declared that she later became Governor of New York. (However, Kudrow did not participate in 2019’s 12-episode Mad About You revival.)

While Friends’ The One With Two Parts, Part 1 was the first time characters from the two sitcoms crossed over, it had already been established that Mad About You and Friends were set in the same story world, as in November 1994, network NBC came up with a special event dubbed Blackout Thursday. This stunt saw New York suffer a power outage during an episode of Mad About You, subsequently leaving the Friends cast dealing with the same problem. 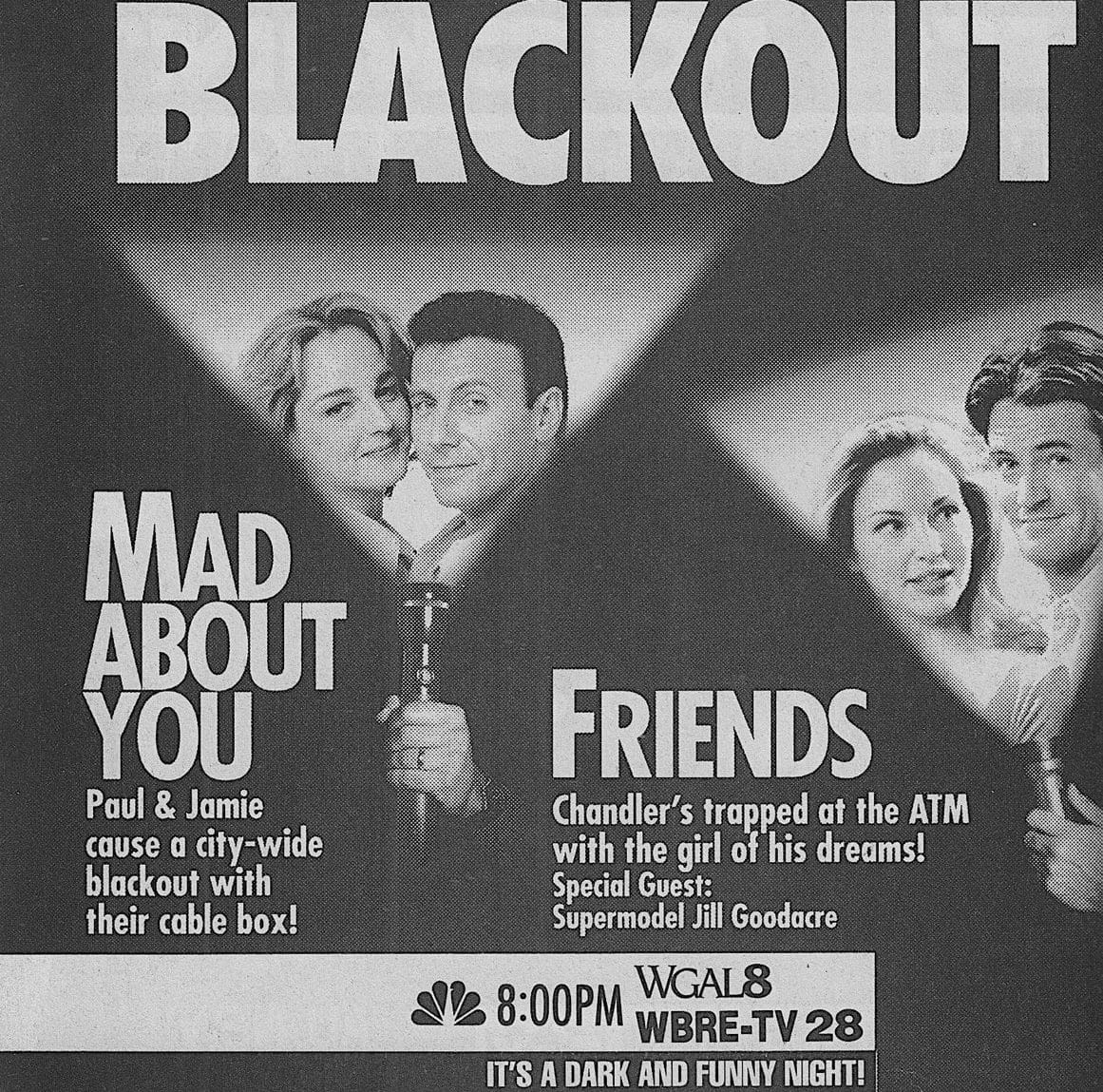 While the makers of Seinfeld (also set in New York) refused to participate in Blackout Thursday, there still were overlaps between the shows at other times, with Mad About You characters popping up in a Seinfeld episode. Friends also had episodes which crossed over with the less well-remembered sitcoms The Single Guy, Hope and Gloria and Caroline in the City – and in turn, Caroline in the City enjoyed crossovers with Frasier.

Could it be, then, that all the great American sitcoms of the 1990s exist in the same televisual universe? You decide.