Kevin Costner was the biggest movie star around for a period in the 80s and 90s – and a key part of his rise was his sporting movies. Since his heyday, the Californian actor’s relatable everyman charm has always been well suited to tales of ambitious sportsmen rising up against adversity.

Costner is best known for his baseball movies, thanks to star turns in three of the best of them: Bull Durham, Field of Dreams and For Love of the Game. Costner’s sporting interests aren’t limited to baseball, though. To date, Costner has made 12 sports movies in total, with his subjects ranging from poker to racing to golf. Here’s how we rank all of Costner’s sports movies, from worst to best. 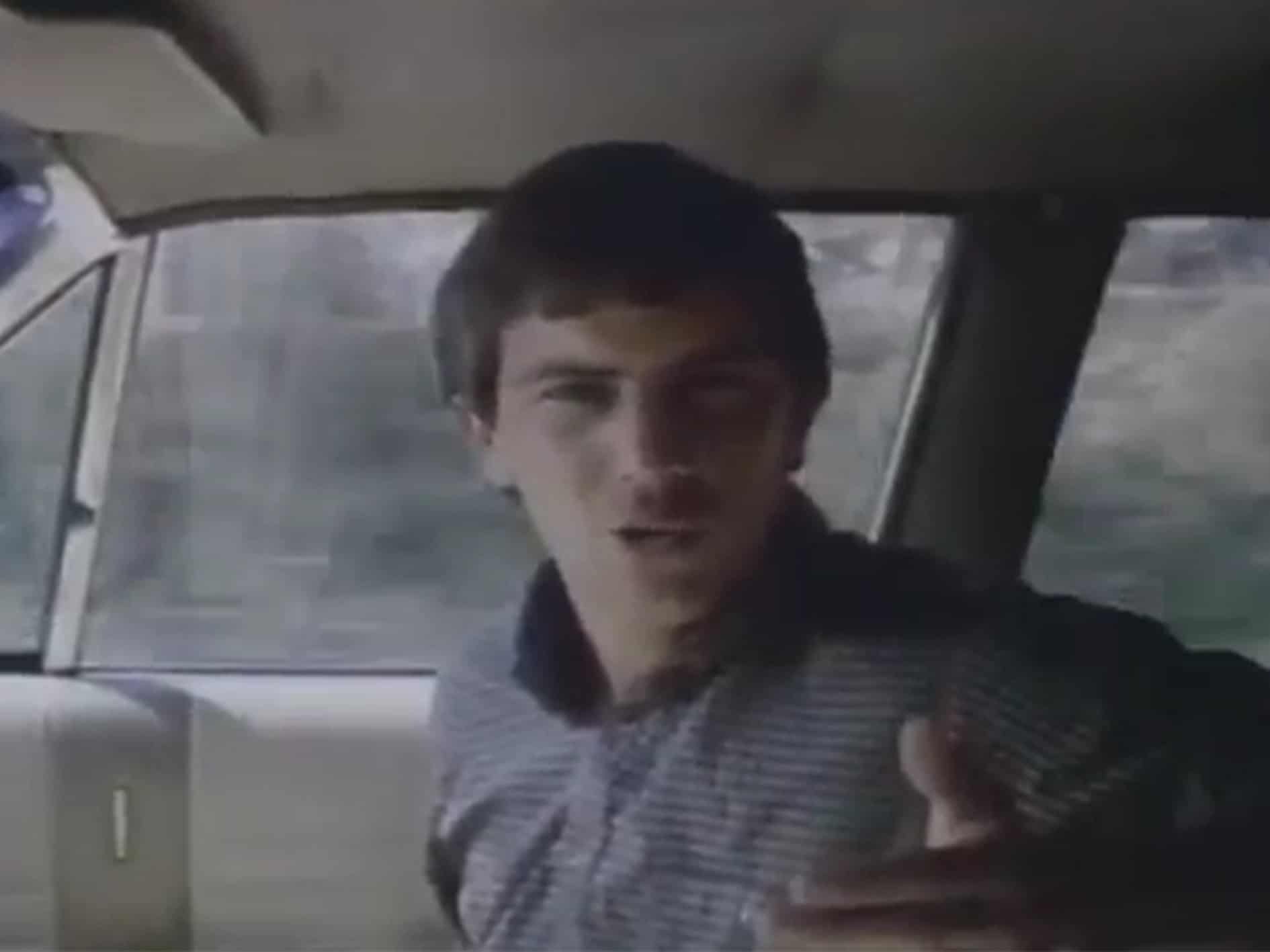 Made in 1982, cut-price sports drama Chasing Dreams sat on the shelf until 1989 when it was released to cash in on Costner’s newfound fame. Though it was promoted like he was the star, Costner actually has a fairly small role as the elder brother of the main character, an aspiring high school baseball star.

Chasing Dreams of course wouldn’t mark the last time Costner made a movie that revolved around baseball, but happily the others would be considerably better. 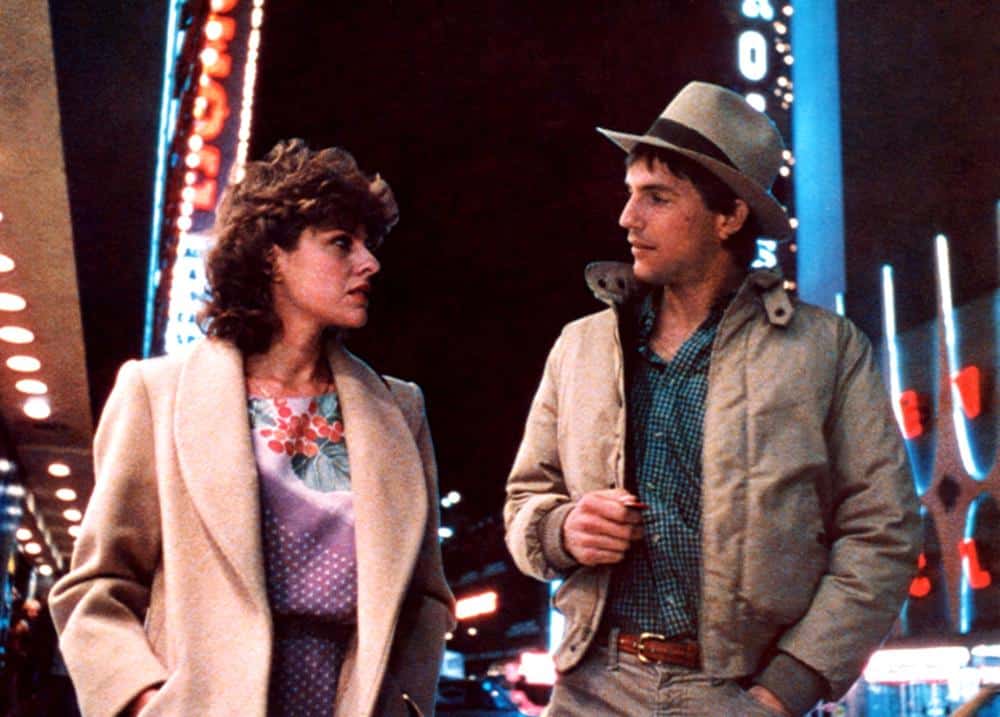 One of Costner’s earliest, the 1983 drama casts him as a card shark teaching the tricks of the trade to Andra Millian’s Stacy. It’s a basic, low-rent gambling movie that doesn’t prove remotely gripping, so only the most die-hard Costner fans need bother seeking it out. 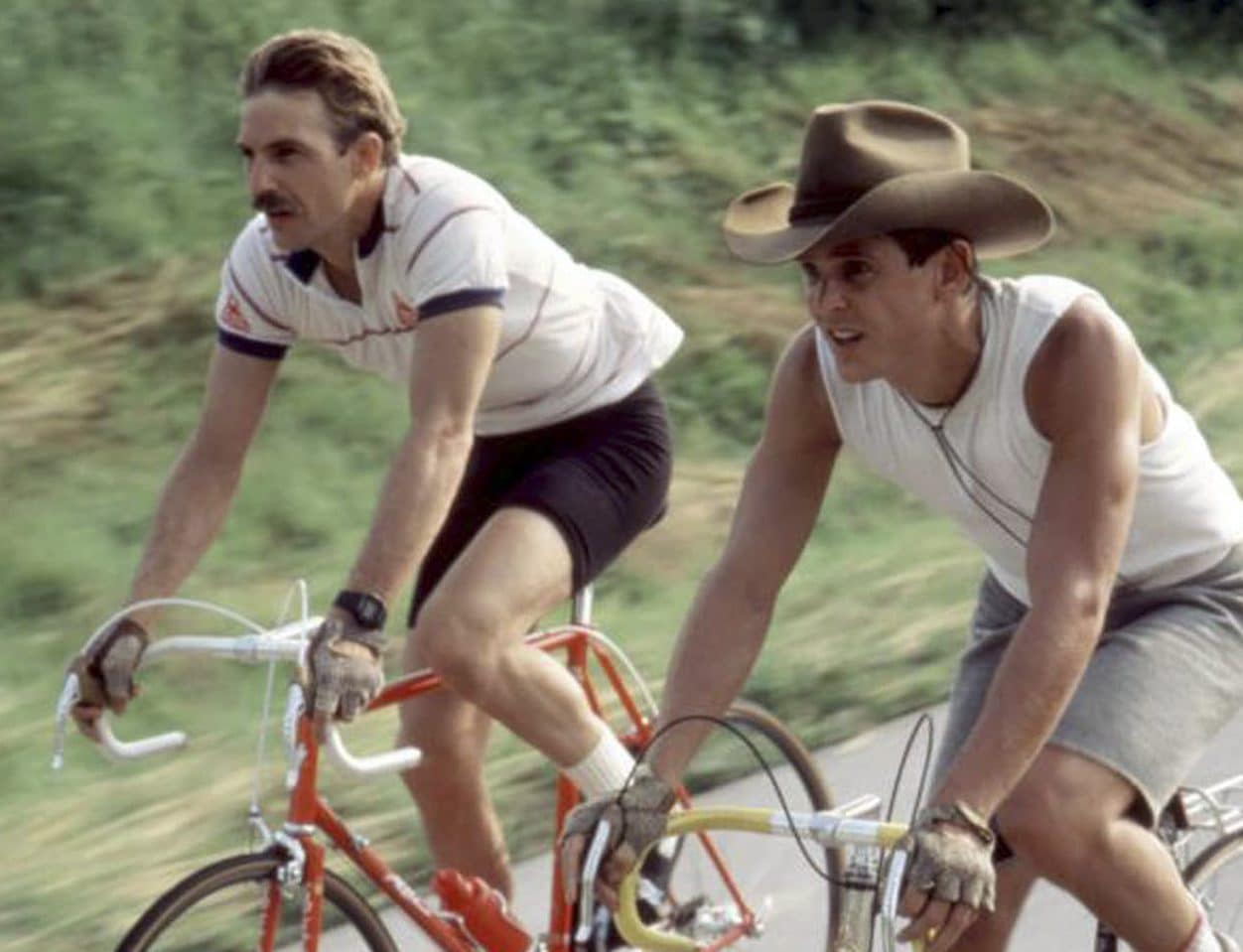 Before he’d quite made it to fully-fledged movie star status, Kevin Costner landed one of his first leading roles in American Flyers, a 1985 drama set in the world of competitive bicycle racing. Costner and David Grant play brothers who sharing a passion for cycling, but who are also at high risk from aneurysms due to a hereditary condition.

Director John Badham’s film is one among the many 80s sports movies which goes for a Rocky vibe, but winds up a little too corny and overblown to take seriously. Also, not to be too unkind, but Costner just looks weird with a moustache.

9. The Art of Racing in the Rain 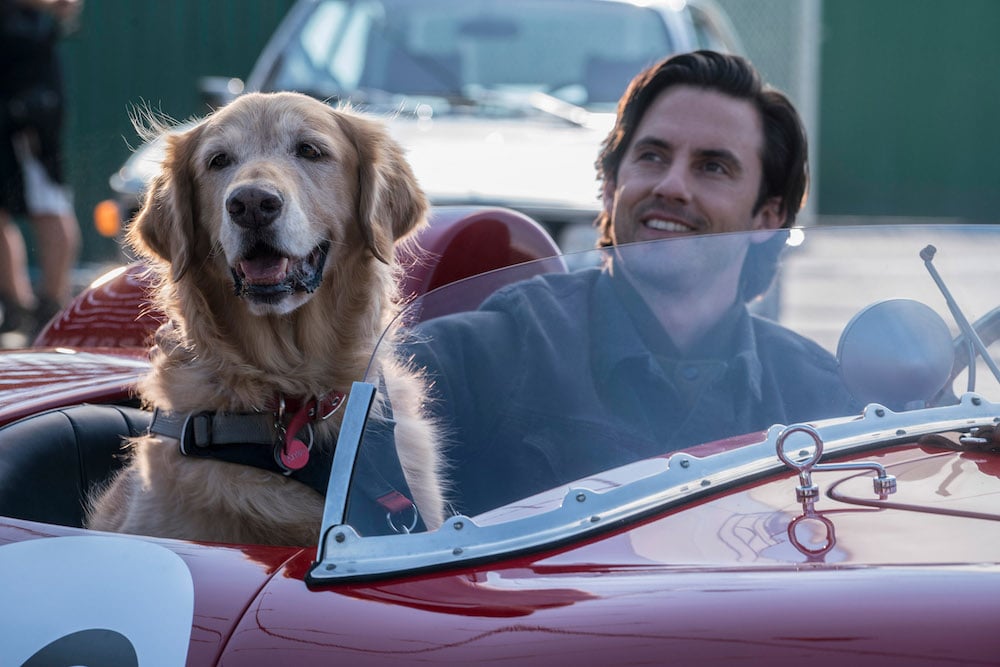 Ordinarily, few things scream ‘all-time career low’ more than playing the voice of a dog in a movie. However, The Art of Racing in the Rain is actually a perfectly enjoyable pet-based weepie, even if it’s every bit as manipulative and sentimental as such films tend to be.

If you’re wondering about the sports connection, it’s that Costner voices a golden retriever named Enzo, after the founder of Ferrari, as his owner (Milo Ventimiglia) is an aspiring Formula One racing driver. 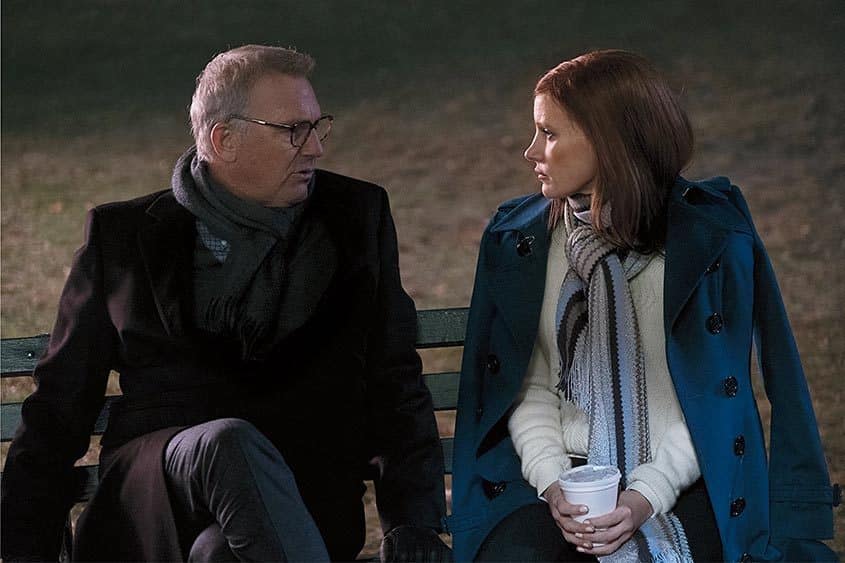 We’ve already decided that movies about cards can be considered sports movies, so Molly’s Game warrants inclusion here – and in any case, it’s significantly better than Stacy’s Knights. Based on true events, Jessica Chastain takes the lead as the founder of a high stakes underground poker ring catering to a clientele of high profile celebrities.

Molly’s Game is a hugely compelling drama, but as is probably clear from the synopsis, it really isn’t Costner’s movie. He takes a key supporting role as the clinical psychologist father of Chastain’s Molly Bloom. 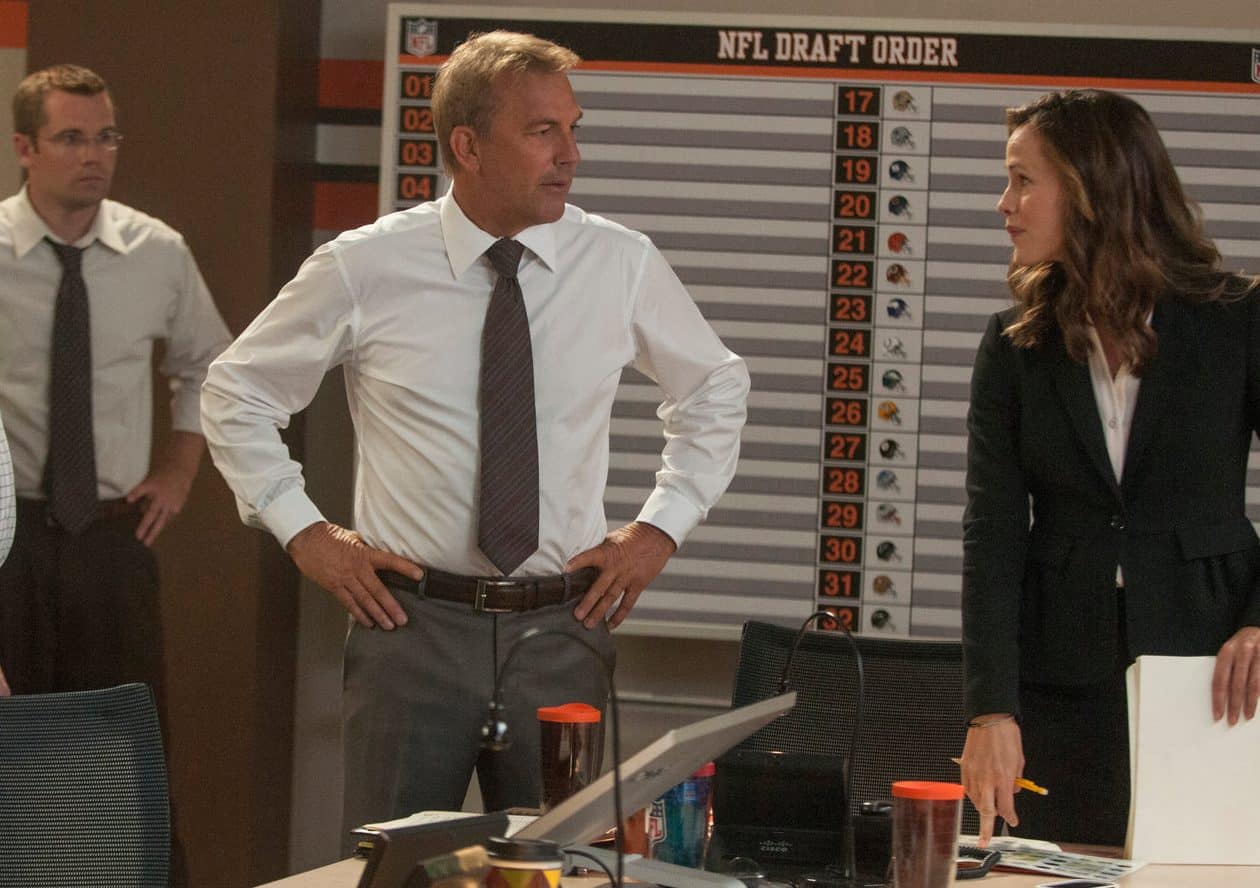 By 2014, the 59-year-old Costner was clearly too old to play a professional sportsman, but he was the ideal age to play a sports manager. Draft Day casts the actor as a football team’s general manager, who juggles personal and professional challenges on the day of the National Football League Draft.

The final film directed by the late Ivan Reitman, Draft Day didn’t go down well with everyone, with some critics accusing it of being overly sentimental and too obsessed with sports statistics. With Costner at the centre, though, it’s hard not to get caught up in the drama. 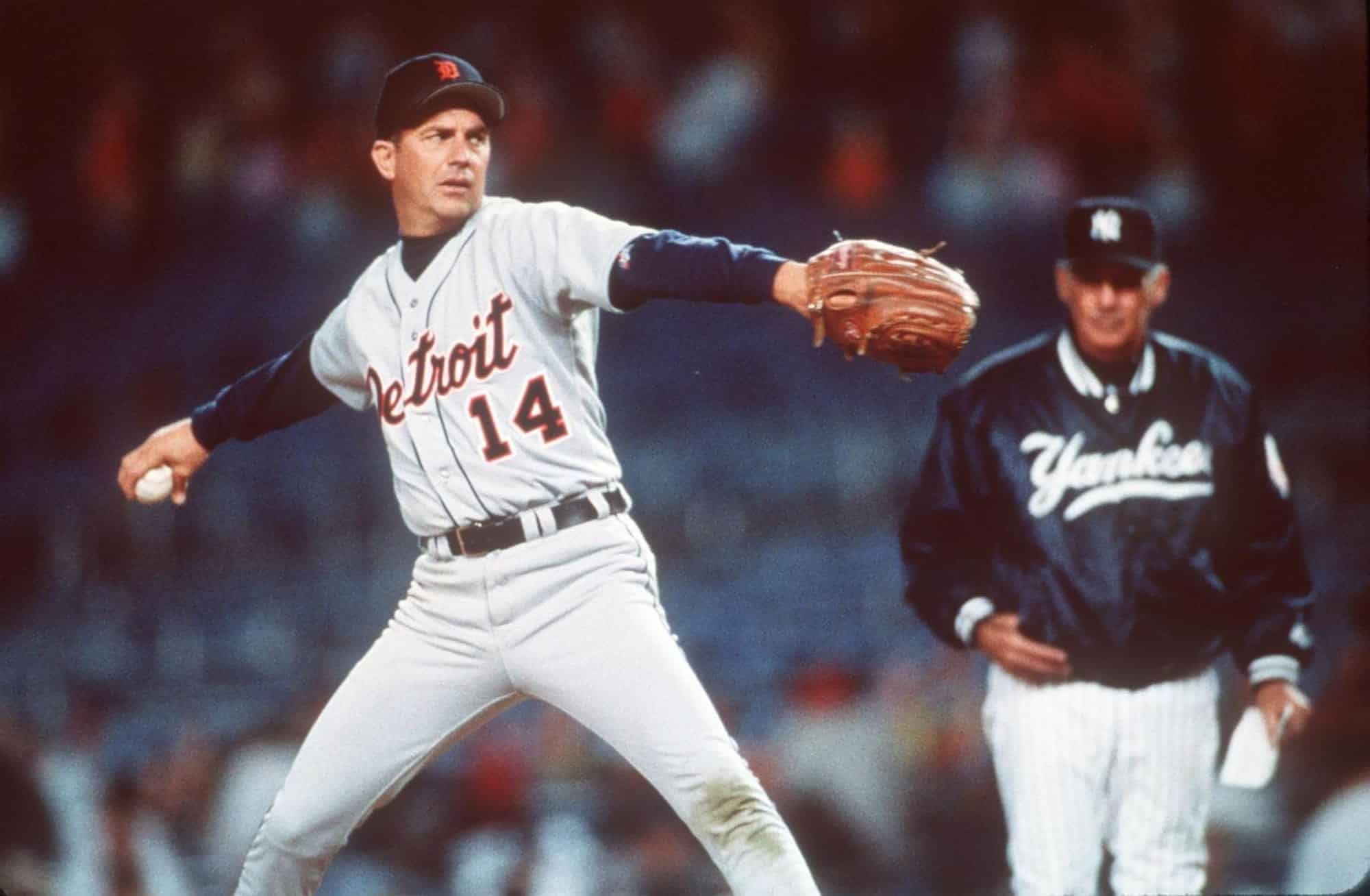 Costner’s last baseball movie to date, 1999’s For Love of the Game casts Costner as the pitcher for the Detroit Tigers, set to play his final game for the team at New York’s illustrious Yankee Stadium. As the game progresses, he reflects on the ups and downs of his life, and his relationship with Kelly Preston’s Jane.

An unusually grounded film for director Sam Raimi (Evil Dead, Spider-Man), For Love of the Game may get a little mawkish and melodramatic, but that’s sports films for you. The film has long been notorious for the fact that it originally contained a full frontal nude scene from Costner which was cut after test audiences laughed at it. 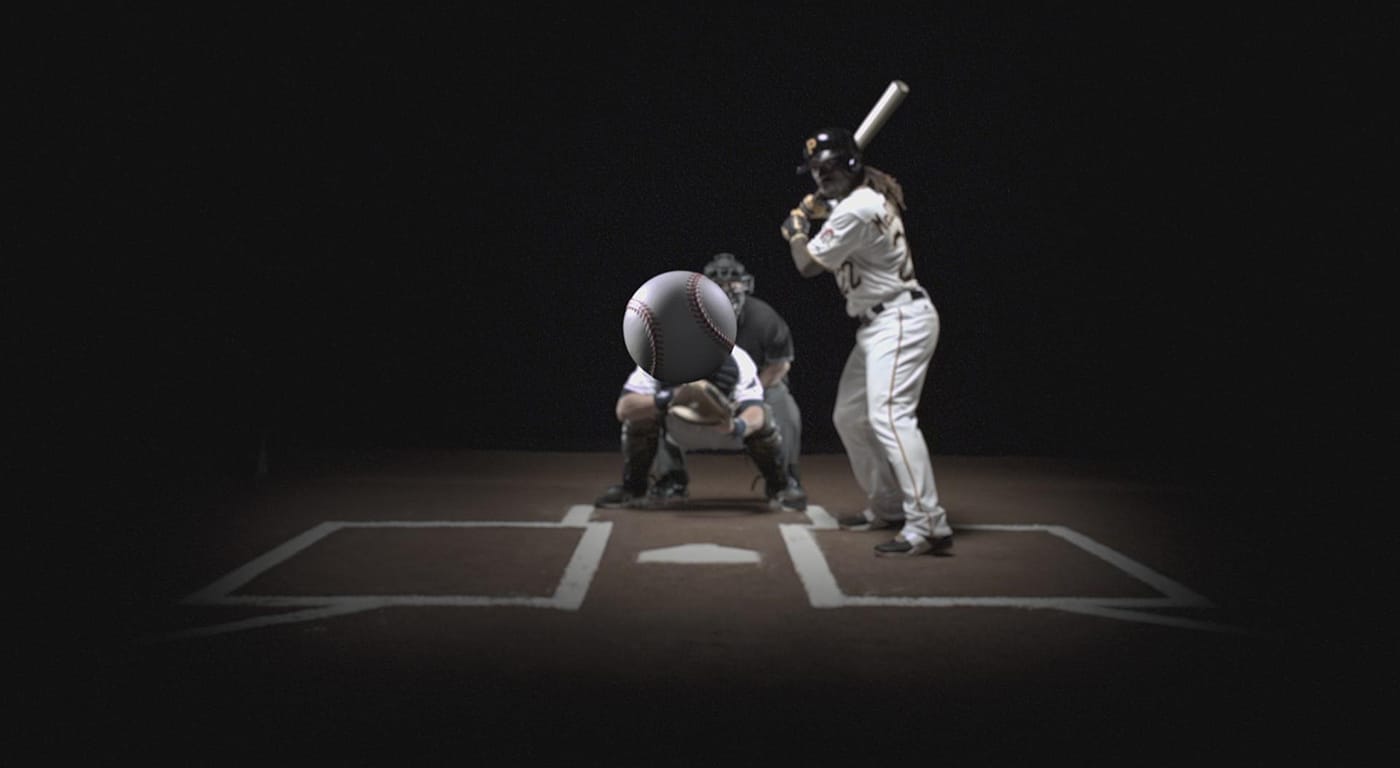 When director Jonathan Hock decided to make a feature-length documentary about baseball, which other actor could they have considered to provide narration other than the king of the baseball movie himself?

Costner is heard but not seen in 2016 documentary Fastball, which explores the science behind a fastball serve. Boasting appearances from scores of big name baseball players including Derek Jeter and Justin Verlander, Costner’s contribution to Fastball was also noted, with Variety remarking that his narration lends the film “a reverent Field of Dreams-style tone.” 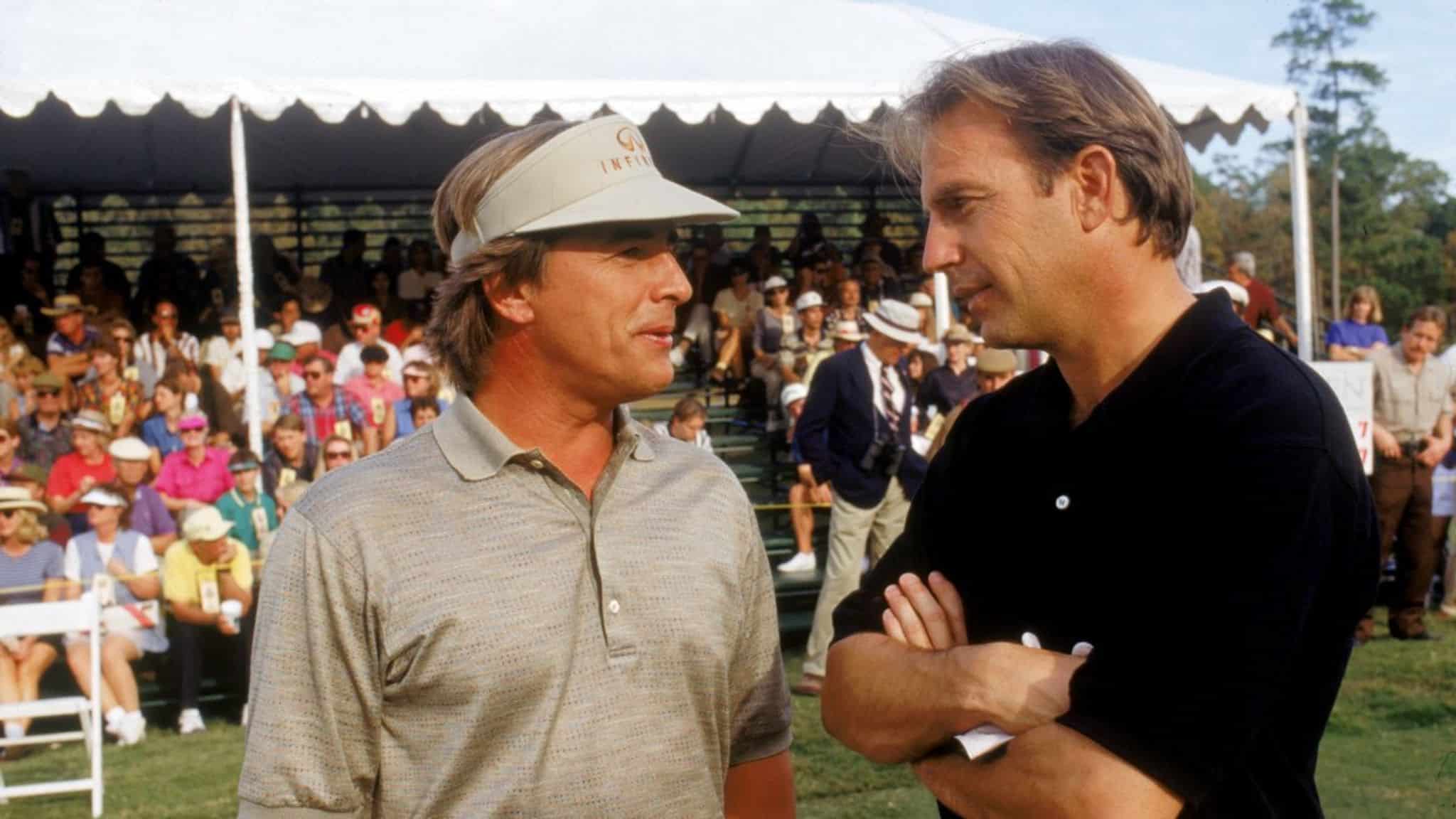 Kevin Costner’s second collaboration with director Ron Shelton, Tin Cup ventures into the world of golf. Costner plays Roy ‘Tin Cup’ McAvoy, a one-time hot young golfer who has lost his momentum. After developing an attraction to Rene Russo, the girlfriend of Don Johnson’s golf champion with whom he has beef, McAvoy enters the US Open to get his own back.

As with so many sports movies, Tin Cup doesn’t deviate too far from the standard rise of the underdog formula, but it handles all the cliches well enough that you don’t really care. Even if you’ve never watched a minute of golf in your life, Costner and co. will still manage to pull you in. 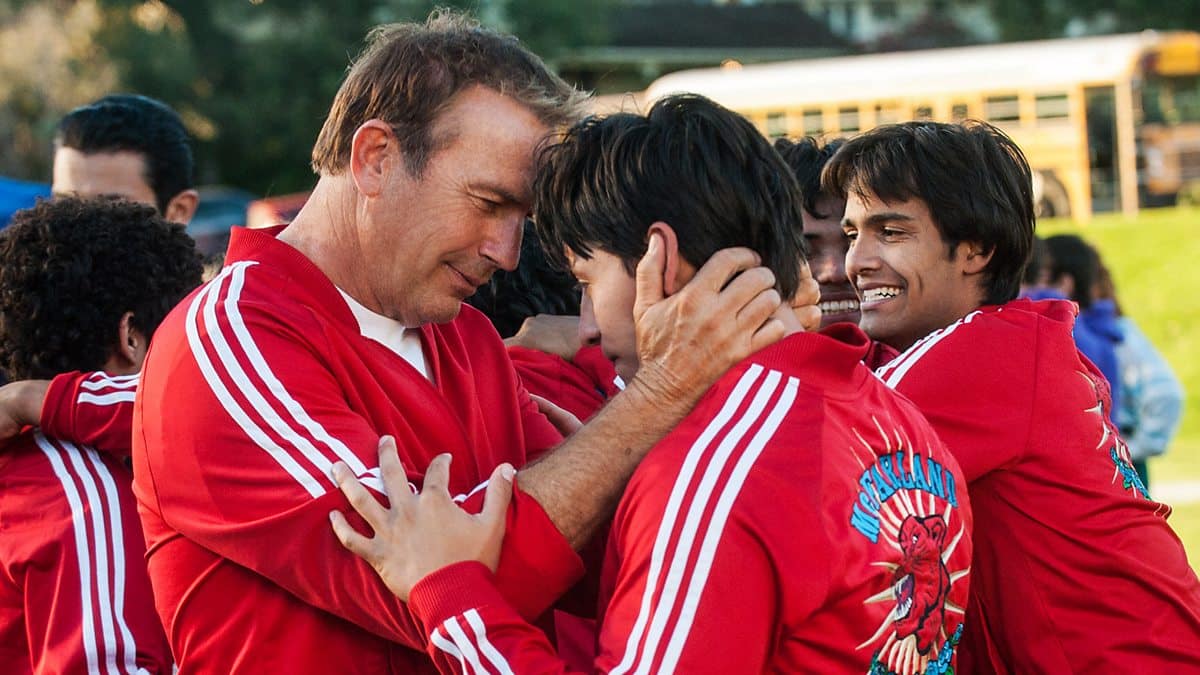 Costner once again takes a mentor role in 2015’s McFarland, USA, a feel-good drama about a high school cross country running team who unexpectedly rose to huge success in the late 80s. Costner takes the role of the team’s coach, and the relationship between the middle-aged white teacher and his mostly Latino students challenges racial tensions in the community.

Based on a true story, McFarland, USA ticks all the usual boxes for a sports movie, but with greater heart and sincerity thanks in no small part to director Niki Caro, and of course a charismatic turn from Costner. 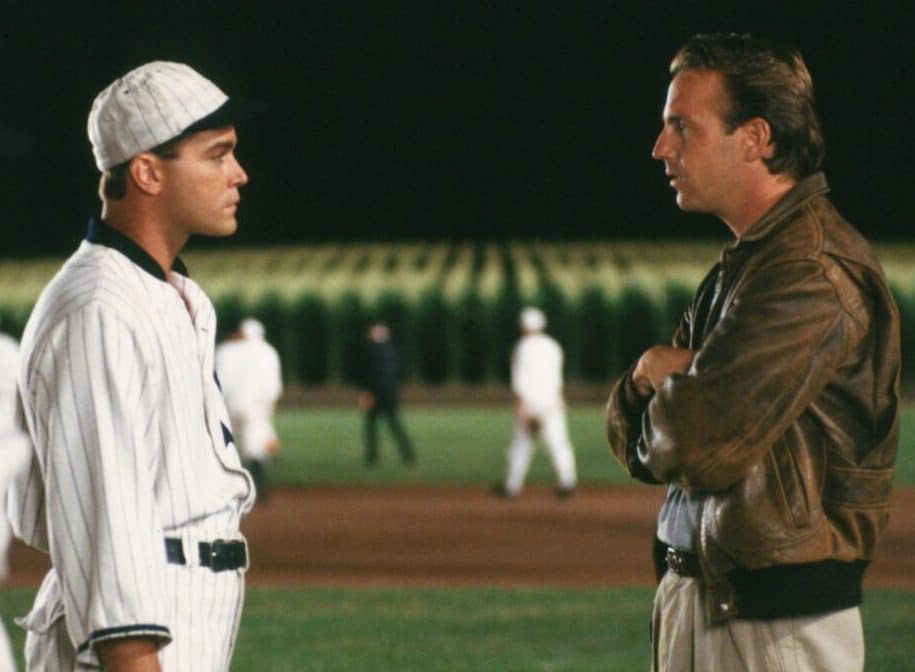 Ask anyone to name a Kevin Costner movie, and odds are Field of Dreams will be one of the first they mention. Director Phil Alden Robinson’s 1989 film is an unconventional blend of sports drama and supernatural fantasy, as a mysterious voice convinces Costner’s Iowa farmer to build a baseball diamond on his field, which then attracts the ghosts of some legendary baseball players.

It’s strange to think the Hollywood studios were initially wary of making Field of Dreams for fear that the concept was too weird for a mass audience, as the film wound up captivating the hearts of millions. It may help if you already love baseball, but Field of Dreams just might convince you of the sport’s power regardless. 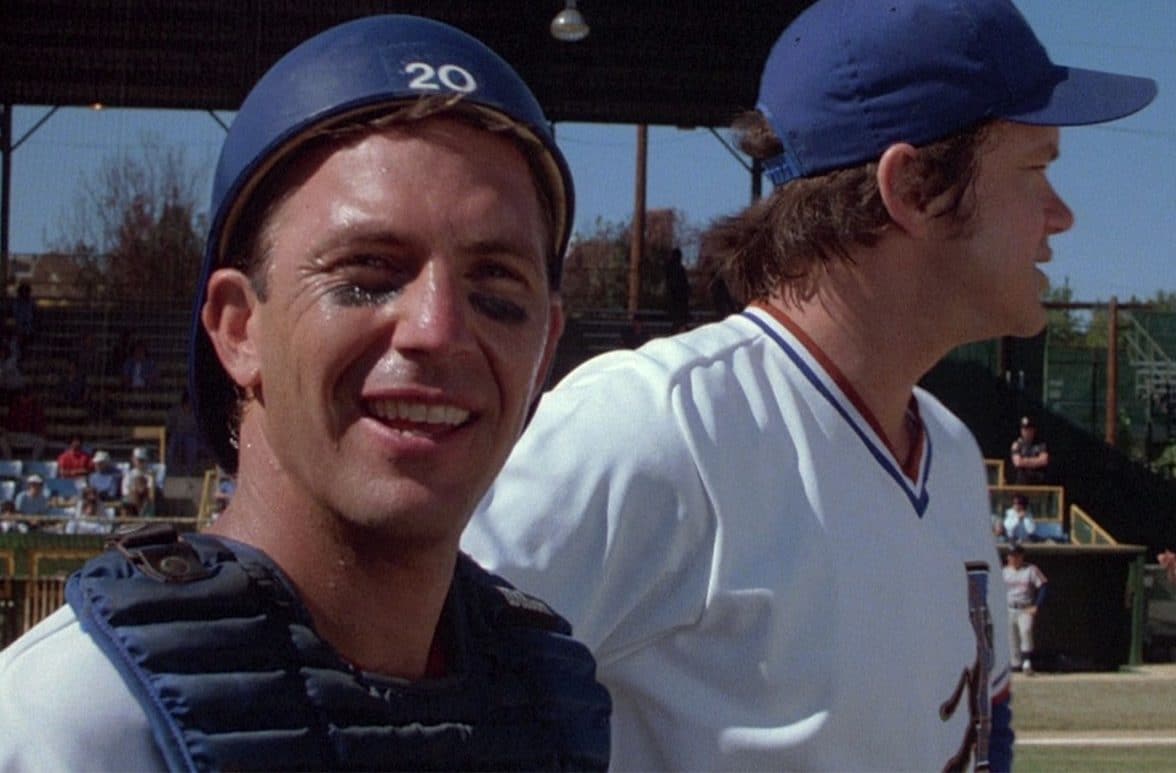 If any one film really established Kevin Costner as a great big screen sports hero, a charming everyman and a major sex symbol, it was 1988’s Bull Durham. The movie casts Costner as a minor league bullpen catcher helping Tim Robbins’ rookie get to grips with the game, whilst both men compete for the affections of Susan Sarandon’s baseball groupie.

Though the film was initially developed for Kurt Russell (who had once played minor league baseball for real), Costner proved a perfect fit for Bull Durham, and the role helped cement his star status. The movie remains well-loved today, and has been declared the number one sports movie of all time by Sports Illustrated.