How James Earl Jones Overcame Stutter That Left Him Mute

James Earl Jones has long been recognised for his resonant vocals and Shakespearean line delivery. Star of such hits as Field of Dreams, Conan the Barbarian and Coming to America, Jones is perhaps most famous as the booming voice of Star Wars villain Darth Vader and The Lion King’s Mufasa. But what makes Jones’ iconic voice even more incredible is the fact that, for much of his youth, the actor didn’t speak at all.

For seven years, between the ages of eight and 15, the young James Earl was virtually mute, owing to a severe stutter he developed in a turbulent time for the Jones family. With the help of a school teacher, however, Jones overcame his mutism, mastering speech through poetry recital until the formerly silent schoolchild had developed an unforgettable baritone.

Born in Arkabutla, Mississippi, on January 17, 1931, James Earl Jones entered a family rich in history – his parents Ruth Jones and Robert Earl Jones were of African-American, Native American and Irish heritage – at a troubled time. His schoolteacher mother was largely absent from his childhood, while father Robert left the family to become an actor in New York City.

His parents elsewhere, Jones was primarily raised by his maternal grandparents on their farm in a household of 13, alongside aunts and uncles who were close to James Earl in age. The children helped to care for the family’s cows, pigs and chickens.

James’ grandmother had a flair for the dramatic, telling the young Jones “bedtime stories… about lynchings and hurricanes and floods and rapes and murders.” But she also encouraged him to develop his own voice. “She taught me from childhood to think independently,” he would later recall. “She never cautioned me to hold my tongue.”

However, this settled childhood fell apart when Jones was five. The family temporarily sent him to stay with his paternal grandmother in Memphis, a change that terrified the toddler. “Silently, stubbornly, I hung onto the mattress [in the car], physically protesting the separation with all my strength,” he remembered.

“The children behind me were falling on the floor with laughter”

Soon afterwards, Jones’ maternal family relocated to rural Dublin, in Manistee, Michigan, and Jones moved back in with them – but he struggled to adapt to the new environment. The actor has described this period as “traumatic”, and it was at this point that Jones developed a serious stutter.

He grew fearful that his maternal grandparents might send him away again, and Jones believes this worsened his speech disorder. “I suppose part of it was my need to stay quiet, in the background, giving no displeasure so I would be allowed to stay,” he has said.

At Sunday school, Jones started to fumble his words when reading aloud to the class. “The children behind me were falling on the floor with laughter,” he has remembered. James’ uncle Randy, who was his constant childhood companion, also had a stutter – which Jones himself used to mock in his pre-stuttering days. In his first year of mainstream school, Jones was so ashamed of his stutter that, eventually, he stopped talking completely outside of the house. At home, according to Jones, “I spoke but I didn’t make sense. I spoke to the dog a lot.”

When the ten-year-old Jones moved onto more complex schoolwork, one sympathetic teacher made accommodations for the mute child. Jones was allowed to stay silent in class, and write his oral exams while his classmates spoke them.

Jones became a keen writer, penning poems in his spare time. When he was a teenager, another teacher named Donald Crouch praised his poem ‘Ode to Grapefruit’, but gently pushed him to recite it from memory. 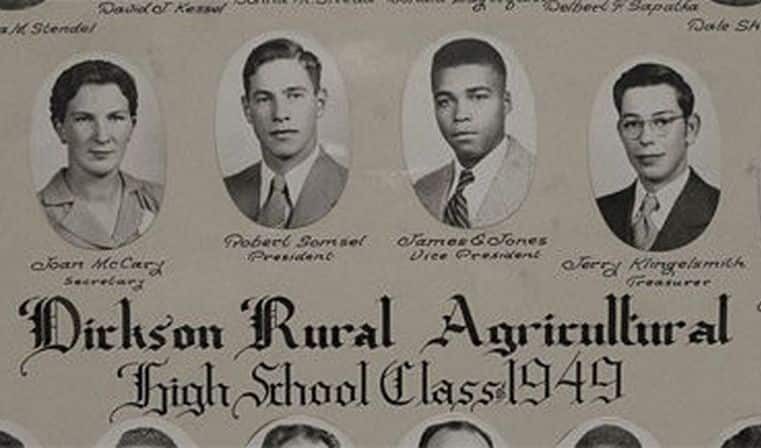 “[Crouch] said… ‘This is a good poem. It’s so good; I don’t think you wrote it. To prove you wrote it, get up in front of the class and say it out loud,'” Jones has recalled. “And that was the time. I don’t know whether he concocted that challenge or not, but he really meant it. And I got up and I said it and didn’t stutter. Nice surprise.”

Jones continued to recite his own poetry and other works, which helped him to “regain the power of speech”. He went on to become vice president of his graduating class at Dickson Rural Agricultural School, then studied pre-med at the University of Michigan before turning to theatre studies.

Jones joined the Reserve Officers’ Training Corps and trained in the Rocky Mountains, but moved to New York City to study acting at the American Theatre Wing. In his spare hours, he worked as a janitor to make ends meet.

He made his Broadway debut in 1957. Despite having only three lines, he stuttered on one of them. Nevertheless, he soon established himself as a Shakespearean actor, before being cast in Stanley Kubrick’s Dr Strangelove (1964).

“Give me a sentence with more than three words beginning with vowels in a row, and it’s hopeless”

In 1968, Jones won a Tony for his role in The Great White Hope – but when he stepped on stage to receive his award, he struggled to speak. “I acted like I didn’t know what to say, but I really didn’t know how to say it, I didn’t know how to get it out,” he has reflected, adding that strong emotions worsen his stutter.

Jones reprised his role in The Great White Hope for a 1970 film adaptation of the same name, receiving nominations for an Oscar and Golden Globe. He went on to voice Darth Vader in Star Wars, and while actor David Prowse donned the iconic suit on-screen, it’s Jones who has ultimately become synonymous with the role, lending his voice to six movies and two series in the long-running franchise.

Despite having one of the best-known voices on the planet, Jones has still continued to struggle with his speech disorder. Even while reciting pre-written lines, Jones would sometimes stumble, as he described in a 1993 interview: “I would get a script, whether it was for TV or a narration, commercial or acting role, and I’ll go through right away and take out all the alliterations”.

“You give me a sentence with more than three words beginning with vowels in a row, and it’s hopeless,” he elaborated. “It drives writers crazy, but I have to.” Jones also struggles with the letter M.

By 1995, Jones’ thriving career belied his stutter in everyday life. “You keep stuttering under control [on set] because you have a script,” he explained to Parade Magazine. “In real life I just try to get through the day. Or through the conversation.”

His embarrassment over missing words didn’t vanish either. “I’m not good in talk show interviews,” he added. “I will think of something that might be brilliant to say, and I can’t get it worded.”

Despite this disorder, Jones now has over 180 film and TV credits to his name, and is still working in his 90s. He reprised his role as Mufasa for the 2019 computer-animated remake of The Lion King, and in 2021 he once more played King Jaffe Joffer in the Coming to America sequel, Coming 2 America.

In 2022, he agreed to the use of artificial intelligence software to make his Darth Vader voice available to Lucasfilm without his input. This technology has since featured in the Disney+ show Obi-Wan Kenobi. 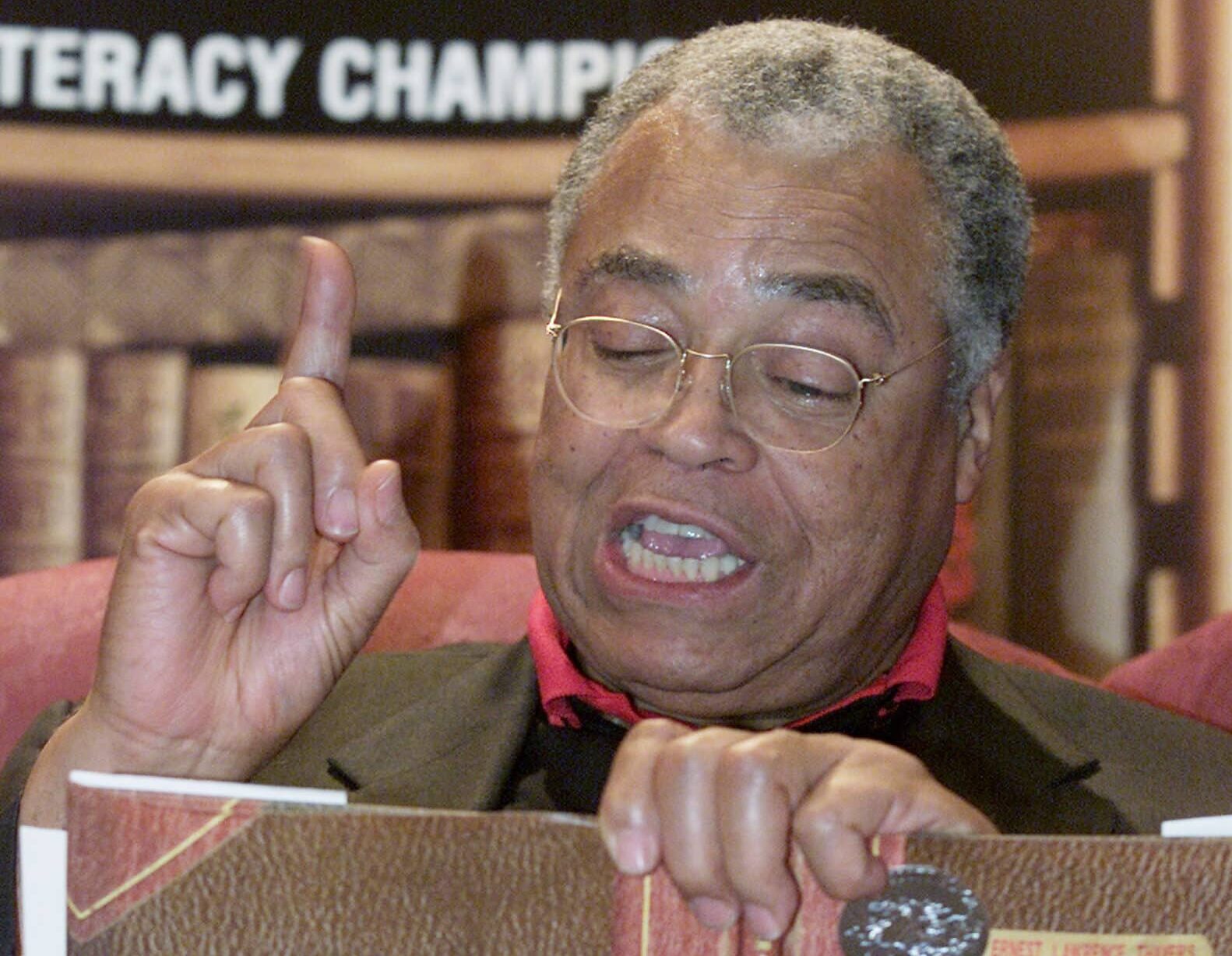 Acting transformed Jones’ life as a stutterer, giving him a creative and expressive outlet when he couldn’t voice his feelings for himself.

Jones also says that his stutter improved his craft, by forcing him to listen and think deeply about other people’s speech. “When you are mute, you become a good listener – it’s all one-way,” he has explained. “You appreciate the written word. You appreciate the sound.”