Inside The World Of Take That’s 1994 Sell Out Tour! 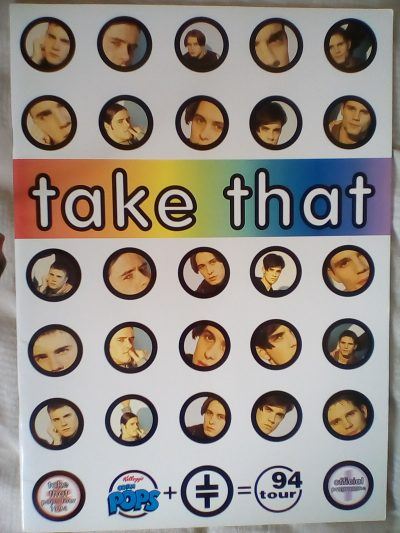 August, September, October 1994. Take That took the UK by storm, with their Pops Tour. Performing to sell out venues and screaming teenage girls, up and down the country!

Take That themselves said, “If you’d told us in 1992, when we did our first tour, that two years later we would be doing our fourth, we wouldn’t of believed you!” 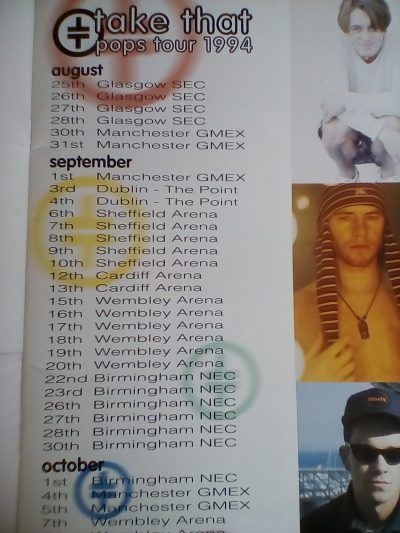 They did nine shows at Wembley Arena! 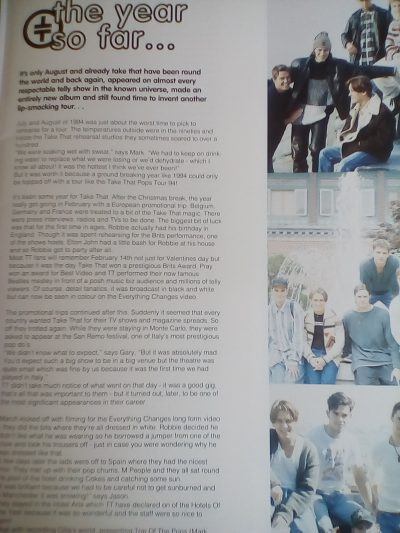 1994 was one hectic year! Before the tour even started Take That had been around the world and back again!

With promotional trips, interviews, photo shoots, filming videos. Plus picking up a Brit Award too! Take That won best video, for Pray. 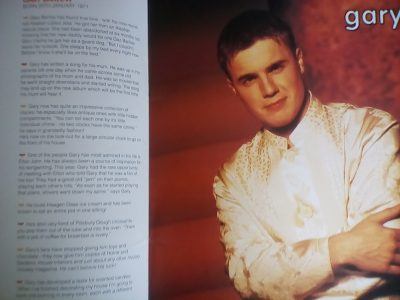 Gary Barlow. Born 20th January 1971. He say’s he has started collecting antique clocks, which he is fascinated by as no two clocks have the same chimes!

One of the people Gary most admires is Elton John. In 1994 Gary first met Elton, who told Gary he was a fan of his too! 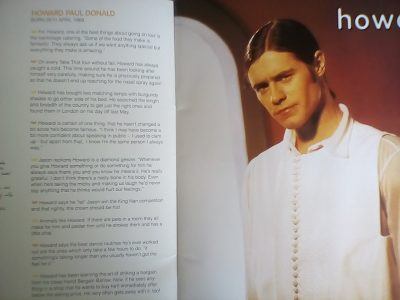 Howard Paul Donald. Born 28th April 1968. The oldest of the band. Howard says he hasn’t changed abit since becoming famous, he knows he is the same person he always was.

Jason Orange says Howard doesn’t have a nasty bone in his body.

Talented dancer, Howard says, the best dance routines he has choreographed are the one that only take a few hours to do. If it takes longer its usually as he cant get a feel of it.

He loves having curry competitions with Jason, to see who can eat the hottest! 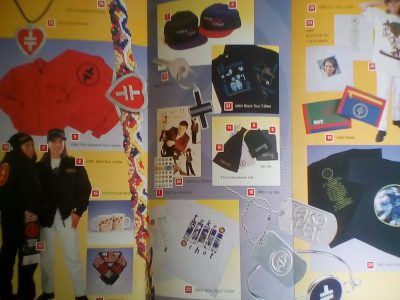 Every fab tour has fab merchandise!
This Tour Broucher cost £6!

You could also get your mitts on a red basketball tour jacket, a T.shirt, a badge, scarves, keyrings, caps, a friendship bracelet, dog tags, a mug, posters, a wallet, a pendant and much more! 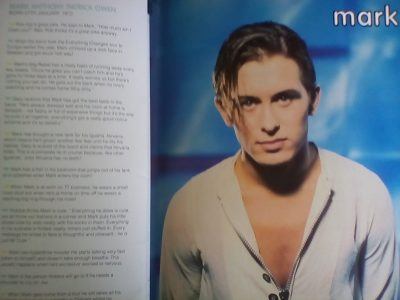 Mark Anthony Patrick Owen. Born 27th January 1972. Mark then had an iguana called, Nirvana. Which Gary was scared of! Gary thought he would get bit! But that would of been impossible, as iguanas have no teeth!

After every tour Mark takes his washing to his local launderette in Oldham, where the lady there helps him fold his clothes! 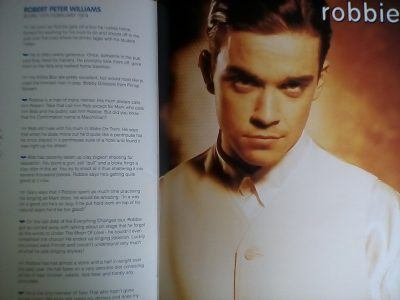 Robert Peter Williams. Born 13th February 1974. When Robbie gets home from tours, he goes straight over the road to the pub, for a pint of lager!

In 1994 he was still living with his Mum in Stoke On Trent. Robbie says, his Mum still cooks him dinner and does his washing! 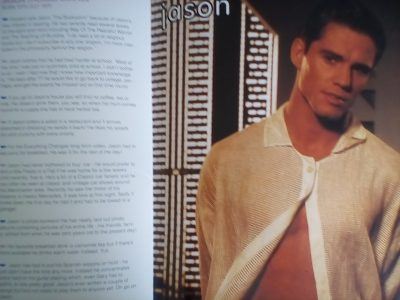 Jason Thomas Orange. Born 10th July 1970. The stripey woolly hat Jason often use to wear, was snatched off his head by a mob of fans! He says he saw it disappear into the crowd!

Jason is very much into healthy living, drinking tonnes of water, eating lots of salads and pumpkin seeds. He never drinks tea, coffee or milk.

He has never bothered buying a car, he prefers to rent a little fiesta or a fiat. But he is a massive fan of classic cars and when he has time he goes to classic and vintage cars shows. 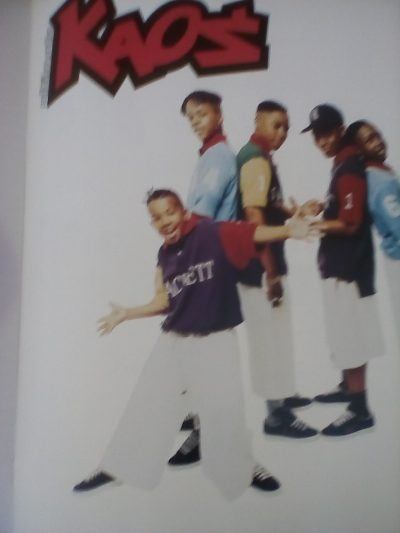 The support act on the Pops Tour was Ultimate Kaos.

The boy band from London. Who were put together in 1992, by Simon Cowell. 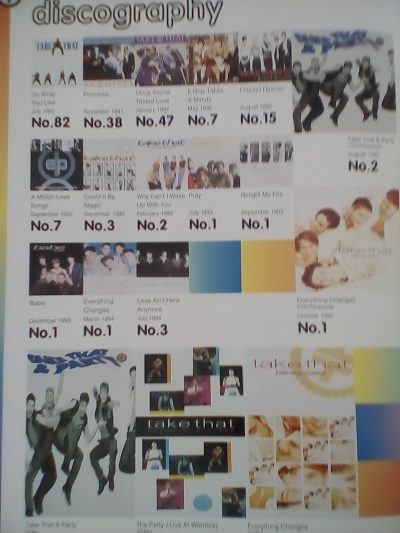 Discography. Take Take had their first UK number one in July 1993, with their single Pray. Followed by another number one with, Relight My Fire, which featured 60’s legend, Lulu.

By 1994 Take That has released three vhs videos, all three were number ones!

Their second album, Everything Changes, released in October 1993, was a number one album. 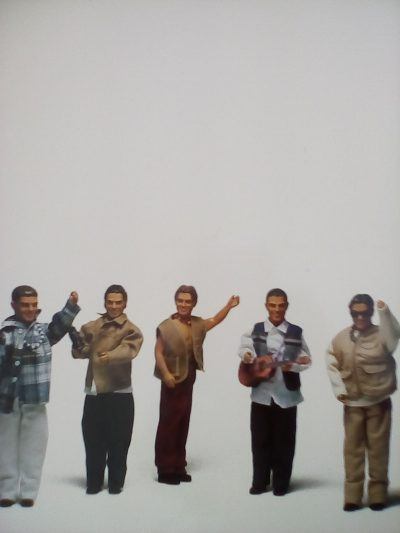 And what better way to end a Tour Broucher than a picture of the band members very own dolls!

Who would of thought on Take That’s return to the music world years later, that they would be better and more popular than ever! Claiming a new generation of fans too!
Take That, long may they continue.