While these days kids can store hundreds of video games on a single mobile phone or tablet, a 1980s bedroom was full to the brim with electronic devices of all shapes and sizes.

You might remember the likes of Tomytronic 3D and Nintendo Game and Watch, but who can recall Systema Space Adventure or Tyco Computer Race 500? Join us as we explore 12 incredible electronic toys from the 1980s you’d forgotten even existed. 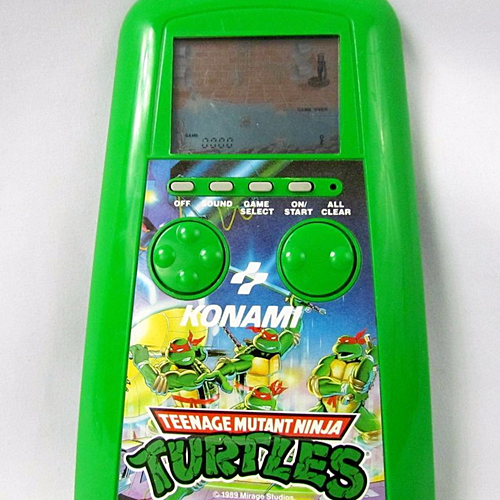 Owning Konami’s Teenage Mutant Ninja Turtles handheld electronic game as a youngster led to an instant rise in popularity among our peers.

Some of you may also remember Konami’s similarly shaped and equally brilliant Top Gun device, which allowed us to take to the sky as Tom Cruise’s Maverick. 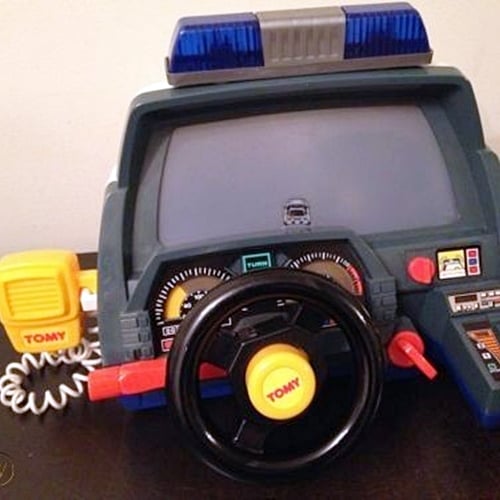 Their Turnin’ Turbo Dashboard was one of the most popular toys of the 1980s, but legendary toymakers Tomy had another car driving device that you may not remember quite so well.

Tomy’s realistic Chasing Police Car dashboard let us fulfill our fantasy of chasing down robbers until they surrendered to the long arm of the law. 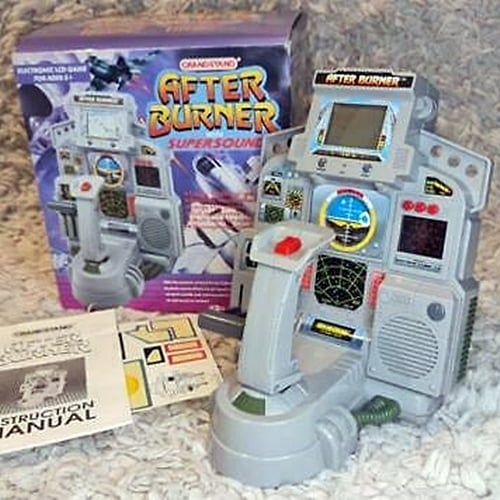 Despite its obvious technical limitations, Grandstand’s amazing After Burner made us feel like we were flying a real supersonic military aircraft.

It was never going to live up to the arcade cabinet of the same name, but having such a device in our bedroom meant we could have ‘just one more go’ any time we liked without having to make a withdrawal from our piggy bank. 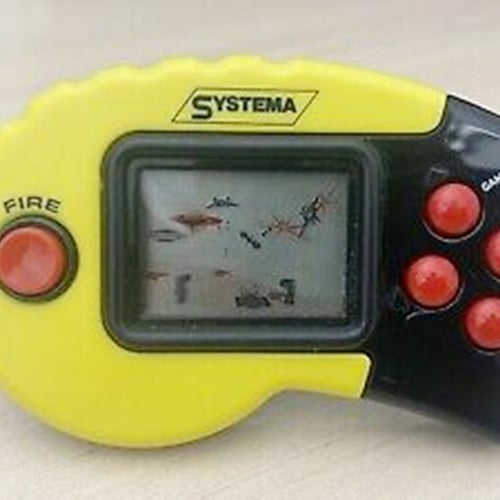 Systema Space Adventure let us take part in simple but utterly addictive battles against a neverending wave of alien spacecraft.

The desire to beat our (already impressive) high score meant that we often ended up playing this game for hours on end. 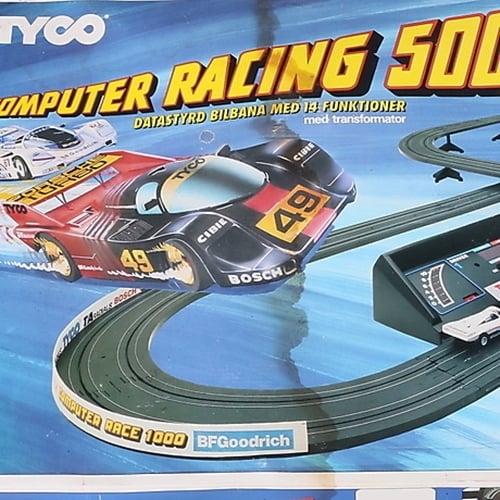 Basically a Scalextric set with a digital lap timer, Tyco Computer Race 500 let us prove that we were indeed better at racing cars than our friends and siblings. 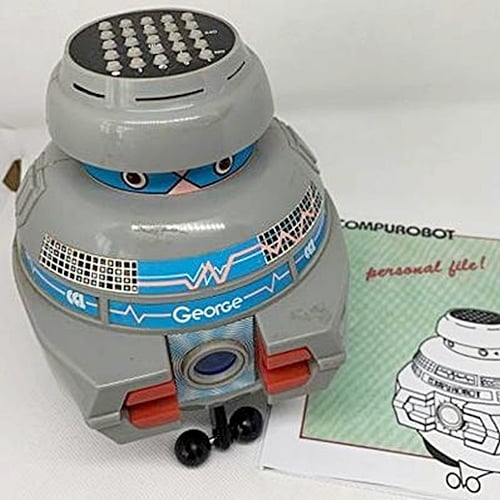 Released by Axlon, a company founded by Atari creator Nolan Bushnell, George the Computer Robot had a memory that could hold up to 48 commands.

We were able to program George to move in whichever direction we chose, and we could also command him to speed up, slow down and even make realistic robot noises. 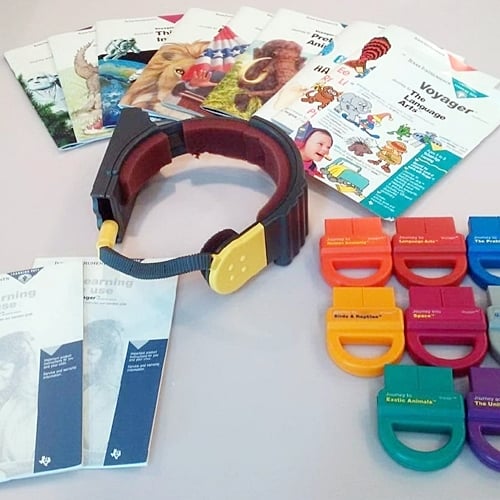 Texas Instruments’ Voyager Interactive Headset made learning fun, allowing us to increase our knowledge on a variety of different subjects.

This futuristic device was made available alongside a number of different cartridges, including Journey to Exotic Land Animals, Journey to Things in Space and Journey Across the Western United States. 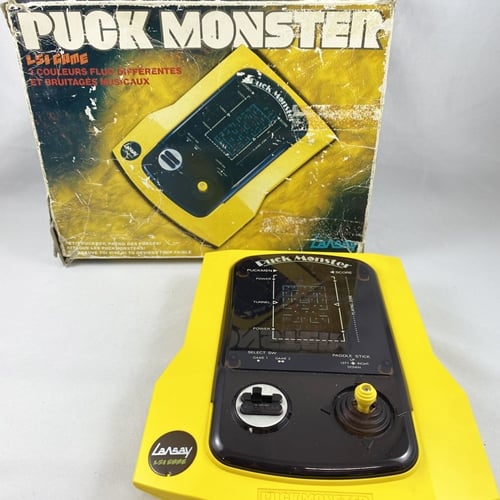 Gakken gave us a brilliantly fun game that took inspiration from one of the most popular video game franchises of all time.

Puck Monster, which asked us to control a circular protagonist as he made his way around a pill-filled maze, was absolutely, definitely nothing whatsoever like Pac-Man. 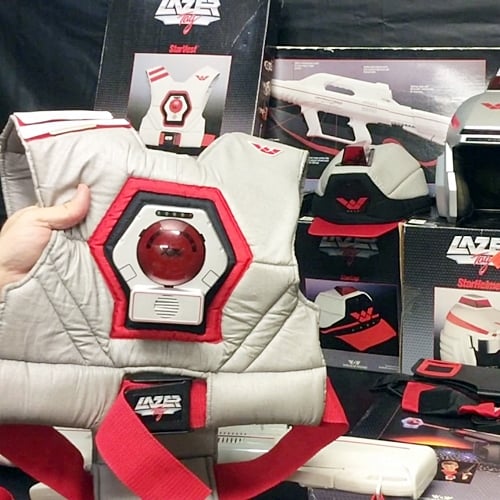 During the 1980s we were able to engage in a realistic science fiction shootout against our family, friends and neighbours with the help of Lazer Tag.

Unfortunately, this futuristic pastime meant strapping on some extremely heavy and rather expensive backpacks, causing us to run out of both steam and finances long before our interstellar war was won. 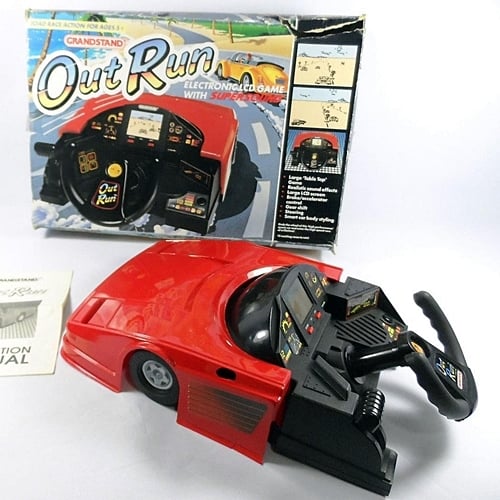 It’s one of the most well known games of all time, and Grandstand did their best to replicate the excitement of Out Run on this gorgeous looking portable device.

Its tiny screen meant that it was never going to give us the same thrill as the state of the art arcade cabinet, but this portable Out Run was still a genuine delight to play. 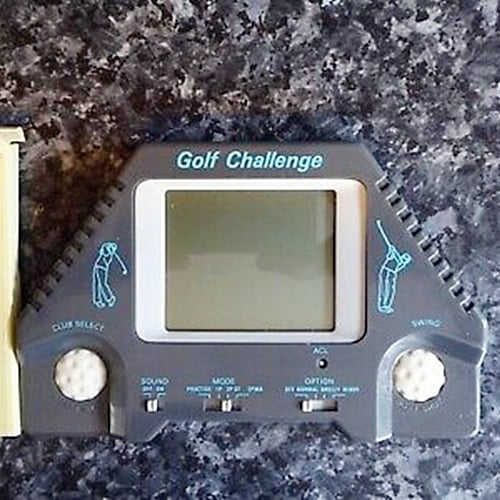 One of hundreds of golf games released during our childhood was Systema’s Golf Challenge, which let us complete a round of 18 holes from the comfort of our bedroom.

Whilst a real game of golf would have bored us to tears as a kid, this brilliant little device kept us amused for ages, and it was far easier to transport than a set of clubs. 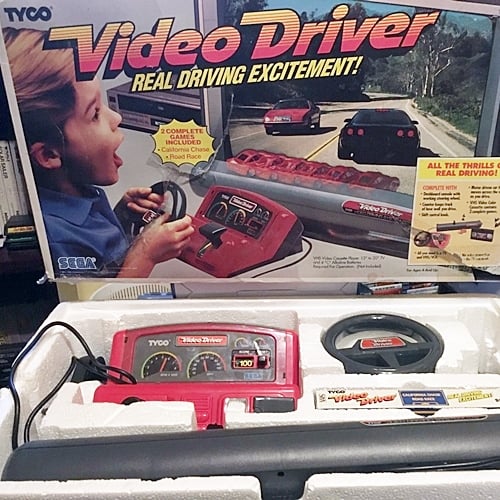 Possibly breaking advertising standard regulations with its promise of ‘read driving excitement,’ Tyco’s Video Driver let us move a tiny car model in front of real driving footage that played on our TV screen with the help of an enclosed VHS cassette.

To say that it didn’t quite replicate the feel of driving a real car is definitely an understatement, but our young selves truly believed this was the technology of the future.