In 1988, Eddie The Eagle Flapped His Way To Winter Olympic Fame

Everyone enjoys a good sporting underdog story, and back in the 80s, no such story was as celebrated as that of British Olympic ski-jumper, Eddie ‘the Eagle’ Edwards.

At the Calgary Winter Olympic Games in February 1988, Edwards was the first person to represent Great Britain in the ski jump for 60 years. Hopes were high for this unlikely outsider to do his country proud, and in his own way Edwards did just that – but not quite in the way he might have preferred.

Born Michael Edwards in Cheltenham, Gloucestershire on 5 December 1963, Edwards was nicknamed ‘Eddie’ in his youth as an abbreviation of his surname. After getting his first taste of skiing on a school trip aged 13, he fell in love with the sport. 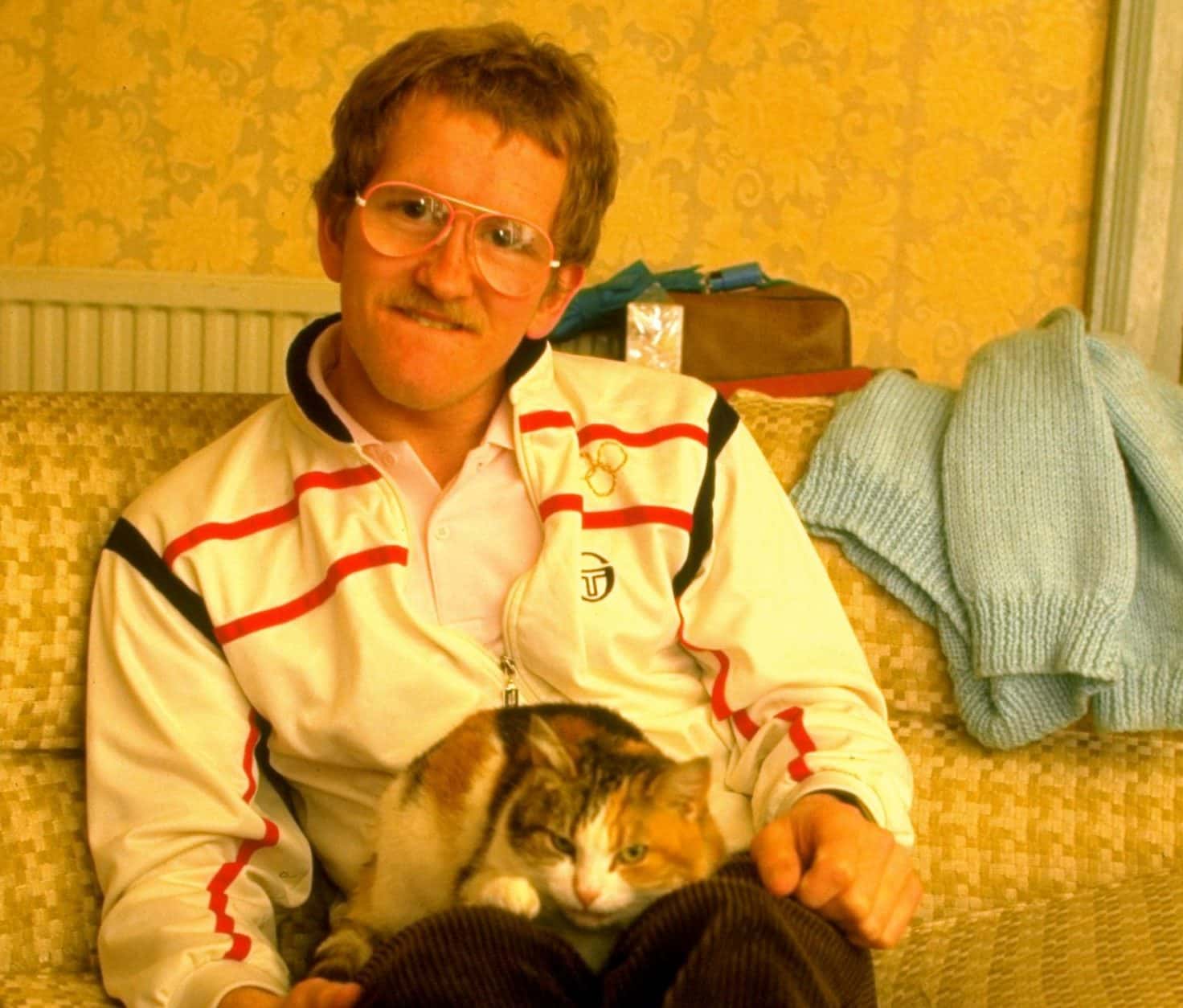 Initially, Edwards hoped to compete as a downhill skier at the 1984 Winter Olympics in Sarajevo, entering out of his own pocket – but he failed to qualify. Undeterred, he decided to move to America in the hope of competing there.

Running out of money, Edwards eventually came to accept his chances as a downhill skier weren’t great, so he started considering alternatives – and eventually realised that no one was representing Great Britain in the ski jump category.

Edwards recalled in 2010, “I looked for something cheaper to do, and I saw the ski jumps and I thought, ‘Well, Britain has lots of alpine skiers, cross-country skiers, biathlon skiers, but we’d never had a jumper.’ 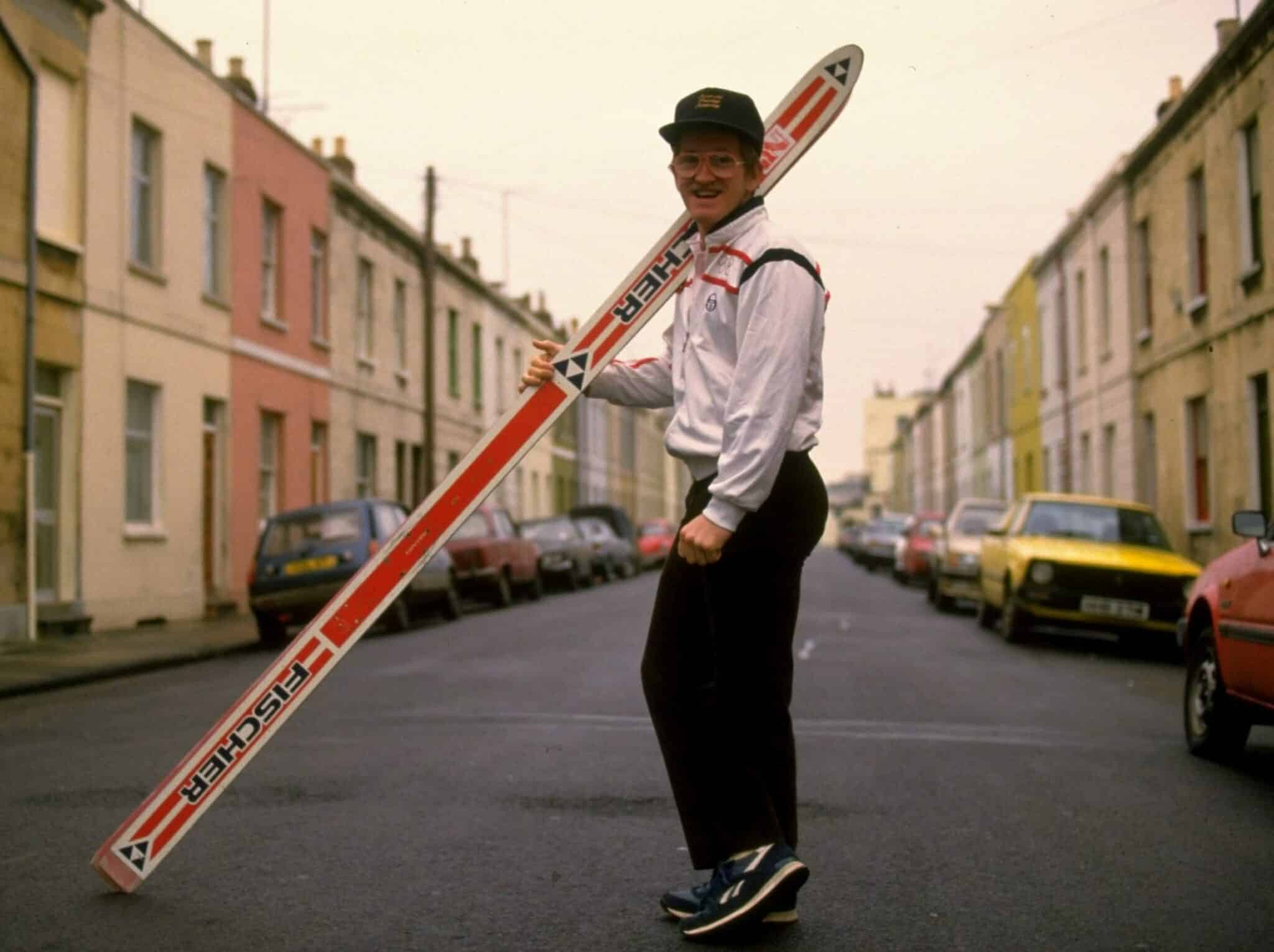 “And I thought, ‘I’ll give it a go.’ The guys at the office in Lake Placid told me to just go down, there’s a shed at the bottom with some skis and boots and helmet, and to help myself.”

Quite apart from his lacking of training or financial backing, other challenges faced Edwards from the beginning. First off, at almost 13 stone (around 181 pounds), he was roughly 20 pounds heavier than average for a ski-jumpers, plus he was heavily near-sighted.

Edwards’ myopic condition forced him to wear large glasses with very thick lenses, and these could easily get fogged up under his ski goggles when reaching the high altitudes necessitated by the sport. (He’s since had corrective surgery for this.) 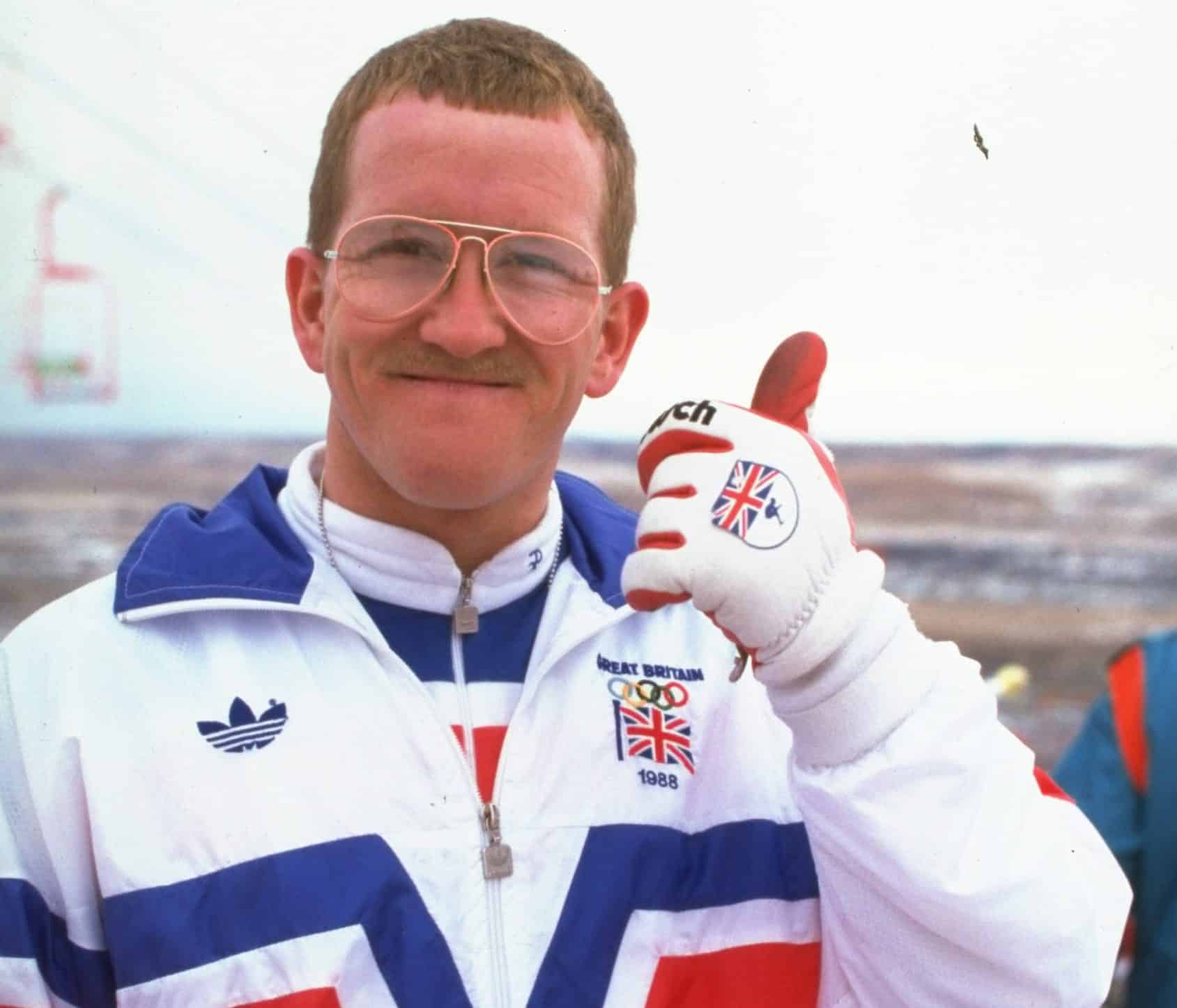 These thick glasses combined with his ginger hair, everyday appearance and average physique rendered Edwards a very unlikely sporting hero in the eyes of many, and as such an easy object of ridicule.

None of this deterred Edwards from his goal. After representing Great Britain as a ski jumper at the 1987 Nordic Ski Championships in Bavaria, Edwards wound up being ranked 55th in the world – and, with no other British entrants, he qualified for the Olympics. He was the first person to represent Great Britain in this sport since 1928, and even then the entrant was Swiss ski jumper Sepp Muehlbauer.

Edwards’ humble beginnings were underlined by the fact that he had taken up residence in a mental hospital in Finland (not, it should be stressed, as a patient) at the time, due to the lack of affordable alternatives. 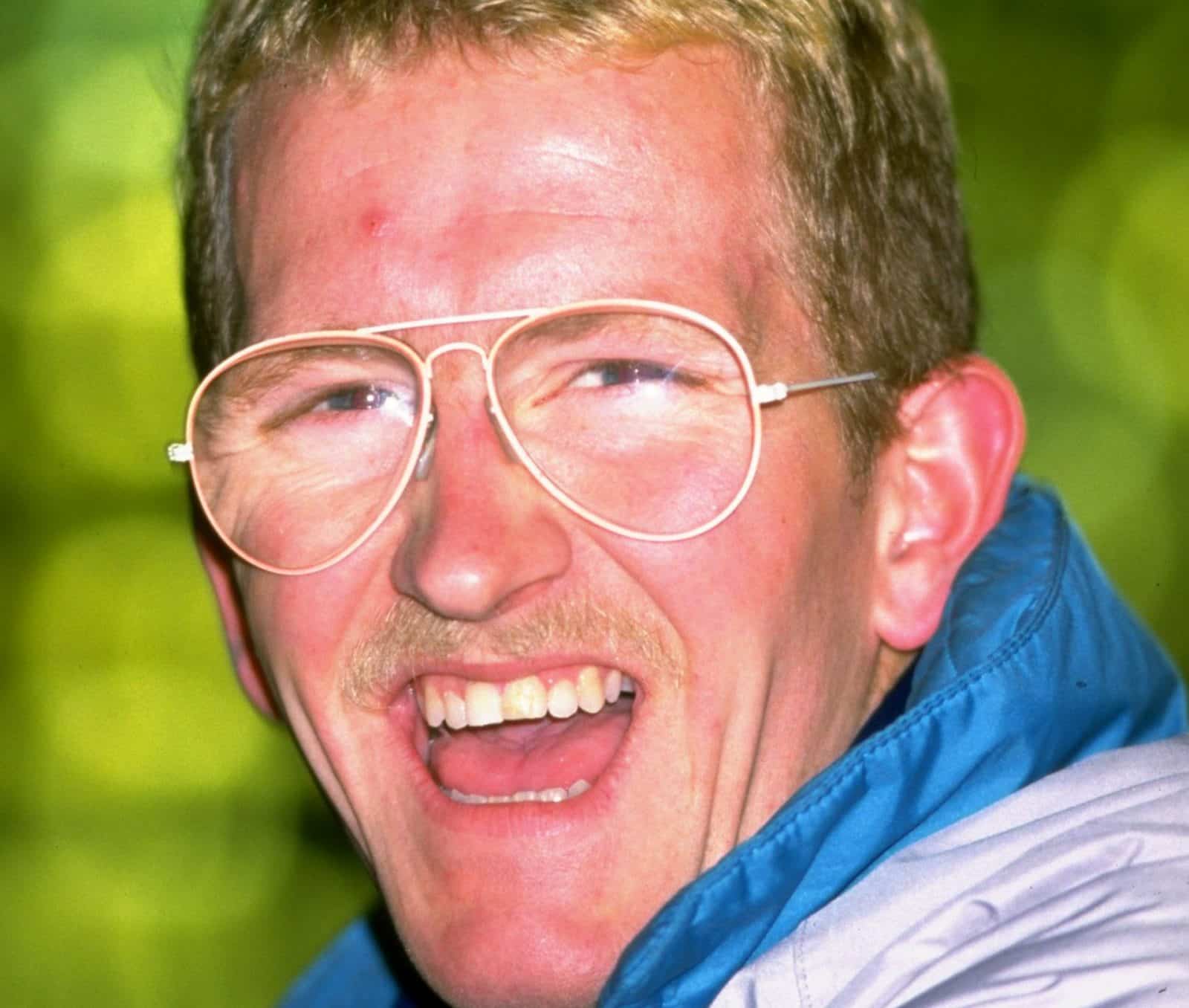 Still, as easy as it might be to belittle Edwards’ Olympic qualification given the lack of competition, his accomplishments shouldn’t be overlooked, particularly given his lack of funding or training.

As Edwards himself has pointed out, “I wasn’t completely incompetent: I’d done a 77m jump, which wasn’t big by Olympic standards, and I held the record for stunt jumping,” having cleared six buses on skis.

Nonetheless, the fact that he was primarily self-taught was a sticking point: “I got a lot of advice from Austrian and French ski-jumping coaches, but because I can’t speak French or German, a lot of it went over my head.” 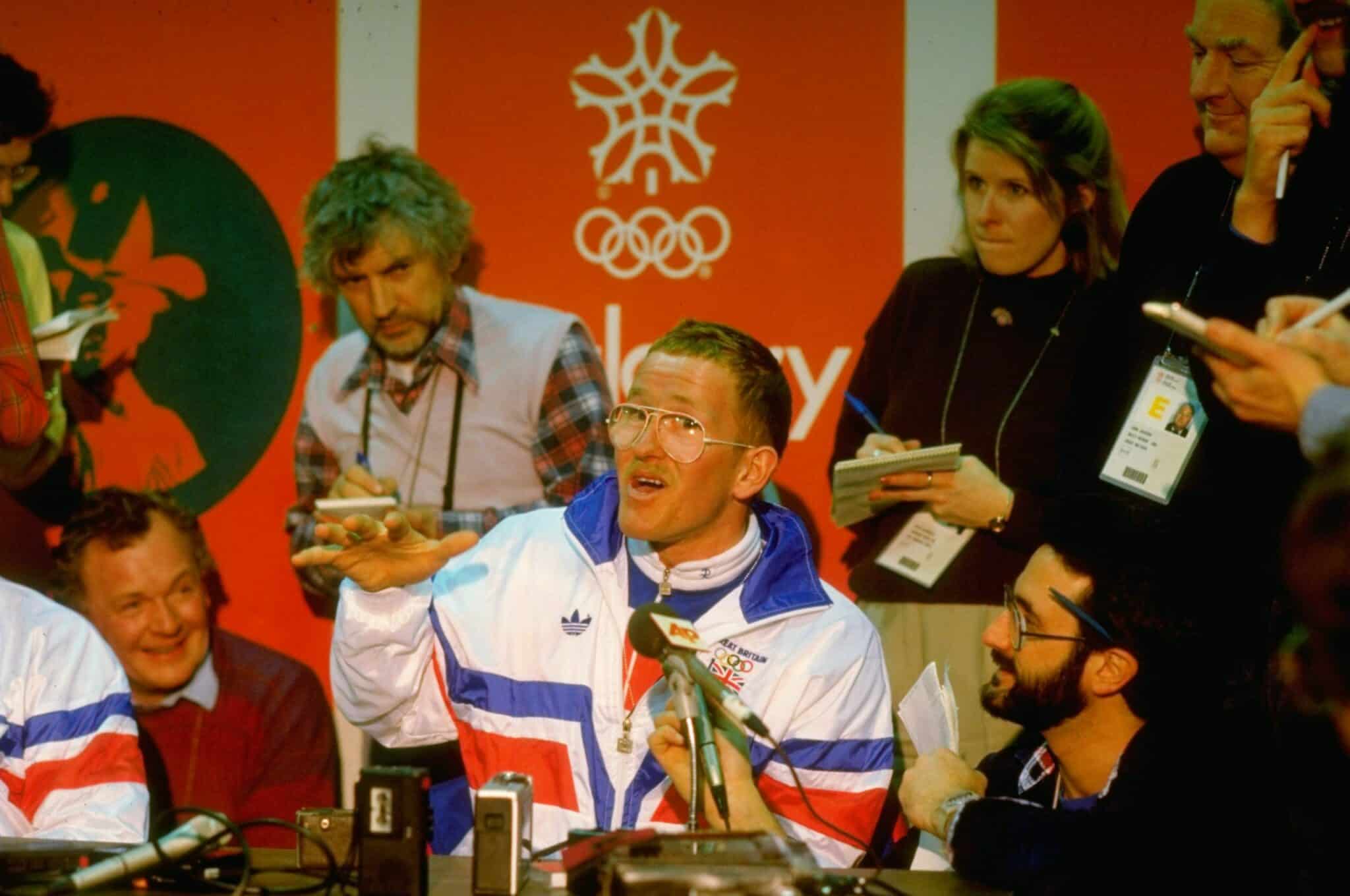 The fact that he had made the Olympics at all was a personal victory for Edwards. He made clear when interviewed by the BBC’s Nine O’Clock News, declaring, “I’m Eddie Edwards, and I’m going to be Britain’s first ever Olympic ski jumper – to all you people who I asked for sponsorship, and you didn’t give it to me – I got there without your help.”

When this clip was broadcast in Canada, it made such an impact that Edwards developed a fanbase who dubbed him ‘Eddie the Eagle.’ This was written on placards greeting the ski jumper when he arrived in Calgary in February 1988.

Edwards admits that, on reaching Calgary, the signs weren’t great: “It went wrong as soon as I arrived. My bags exploded on the carousel at the airport, so I jumped on and chased after my pants and slippers.” 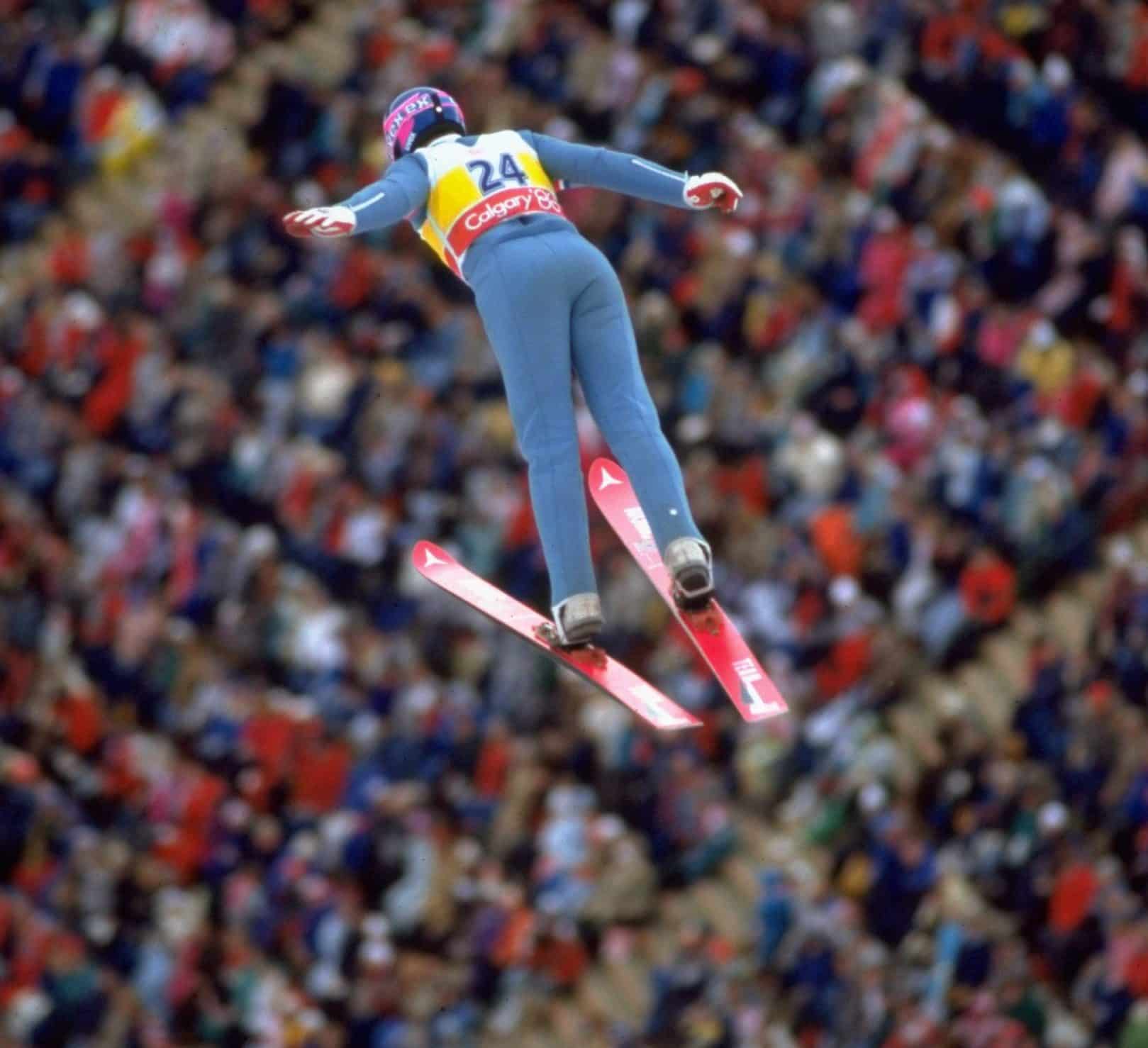 Once it came time to compete, Edwards was met with equal parts celebration and derision, his larger-than-life persona and compelling background bringing a lot of attention to the ski jump.

Edwards enjoyed putting on a show for the crowds, loudly cheering his own efforts, and flapping his arms like a bird’s wings in honour of his ‘eagle’ sobriquet.

Alas, none of this was enough to bring Edwards anywhere near to the top in his event. Competing in both the 70m and 90m jump, he finished a distant last place in both. Still, he set a new British record in ski jumping, and to this day he’s ranked all-time sixth among British ski jumpers. 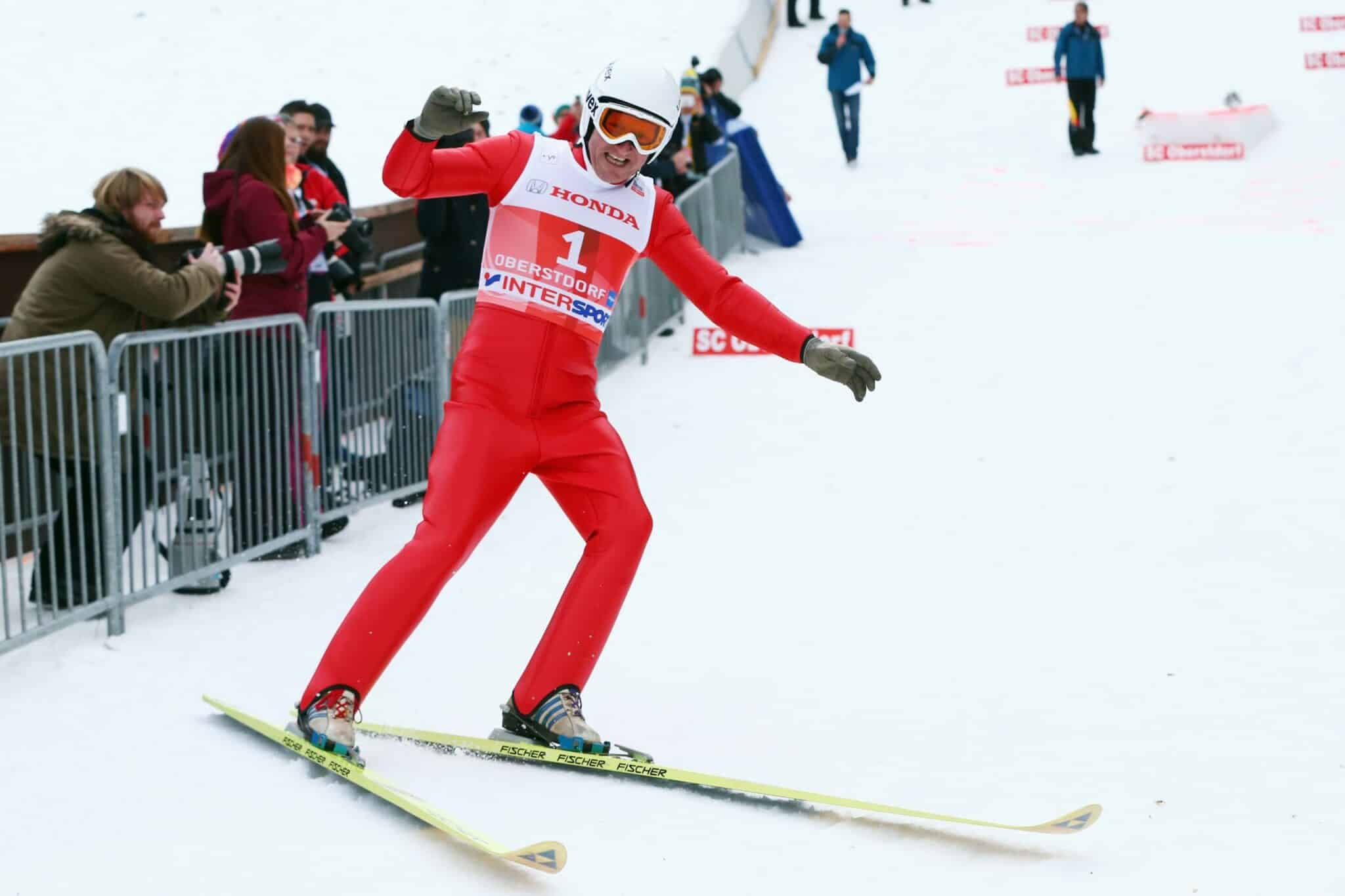 The International Olympic Committee were not too pleased by the publicity Edwards had attracted, feeling that he had given the sport of ski jumping a bad name.

Because of this, they soon implemented what became known as the Eddie the Eagle Rule, which stressed that any future Olympic contenders must be ranked in either the top 50 or top 30% of competitors worldwide.

Even so, Edwards returned to the UK as a very different kind of Olympic hero. He became a celebrity for a time, and released a novelty record, Fly Eddie Fly, celebrating his sporting adventures. 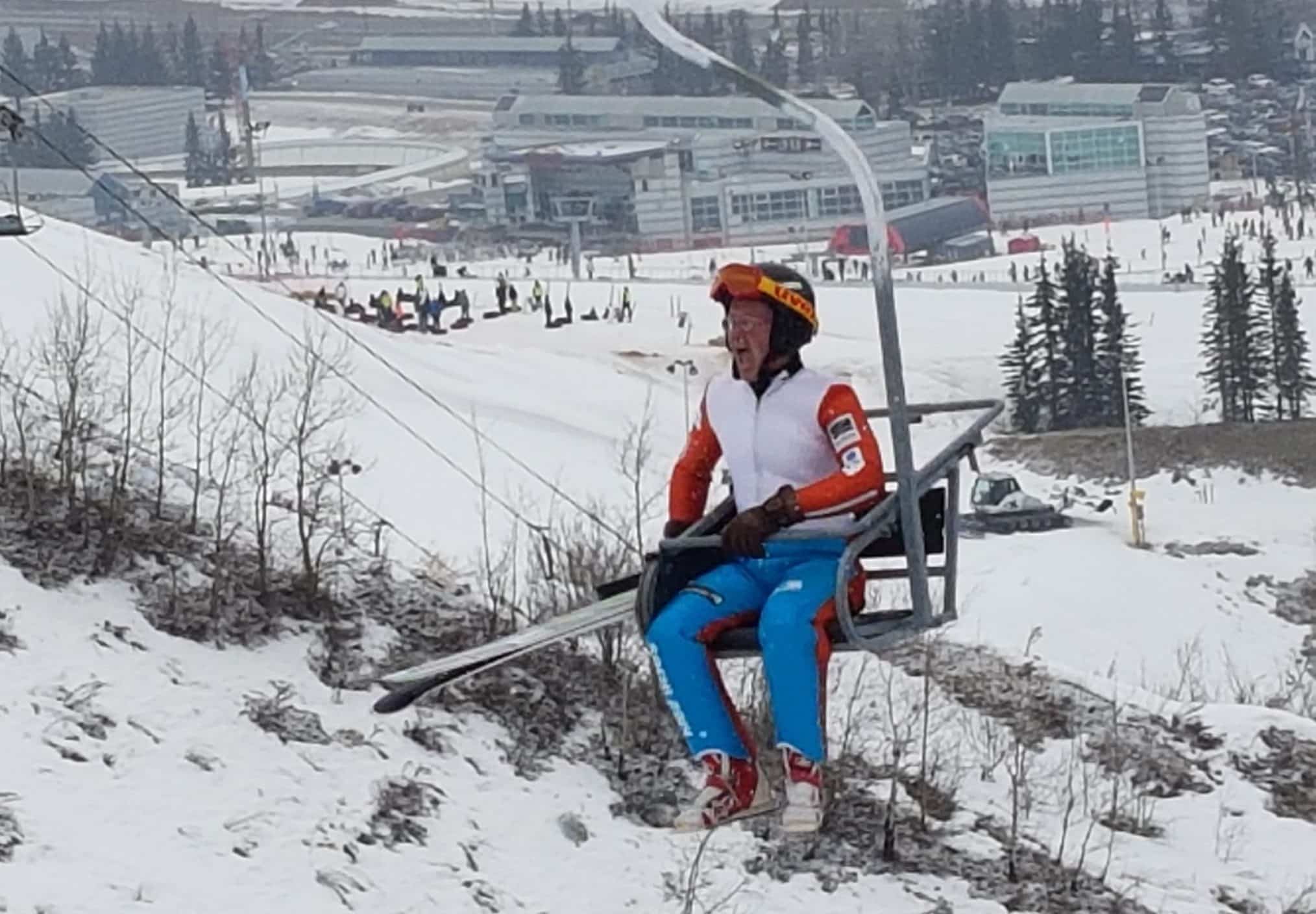 In the decade that followed, Edwards failed to qualify for further competitions, and eventually he retired. In the years since, he’s worked full time as a builder and plasterer, as well as making personal appearances as a motivational speaker and appearing on a number of reality TV shows.

Over time, it would seem the IOC’s misgivings about Edwards have eased. He was invited back to Calgary in 2008 to participate in a 20th anniversary celebration of the 1988 Winter Olympics (alongside members of the 1988 Jamaican bobsled team, celebrated in the film Cool Runnings). Then in 2010, Edwards served as a torchbearer at the Olympic Games in Vancouver.

Then in 2016, after many years in development, his story came to the big screen in 2016’s Eddie the Eagle starring Hugh Jackman and Taron Egerton. After all these years, Edwards’ story still resonates all over the world. 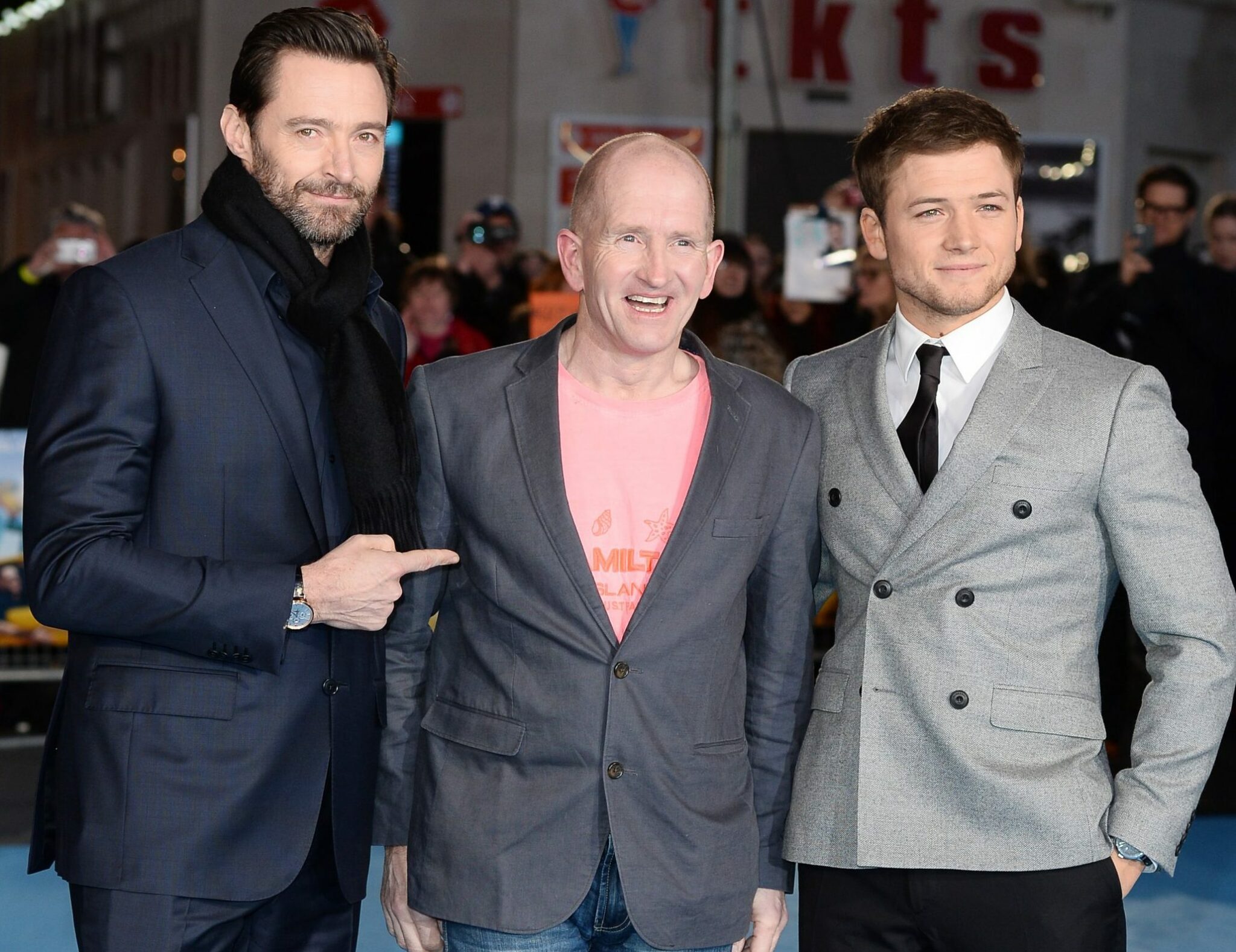 Regarding his enduring popularity, Edwards remarked in 2010, “I think I was exemplifying that whole Olympic spirit – a true amateur sportsman coming to a sporting event just because he loved his sport and loved doing it.