The 80s arguably produced some of the greatest films of all time. We all remember watching classics such as The Goonies and Indiana Jones and the Lost Ark, but what about cult hits such as The Lost Boys? Were you a movie buff in the 80s or did you prefer playing video games? Find out below…

Below are 20 movies, listed in alphabetical order, that will define which of you is the greatest 80s child of them all. After you’re finished, post a comment telling us how many of the movies you’ve seen, and we’ll soon find out if you’re the truest 80s kid of them all! 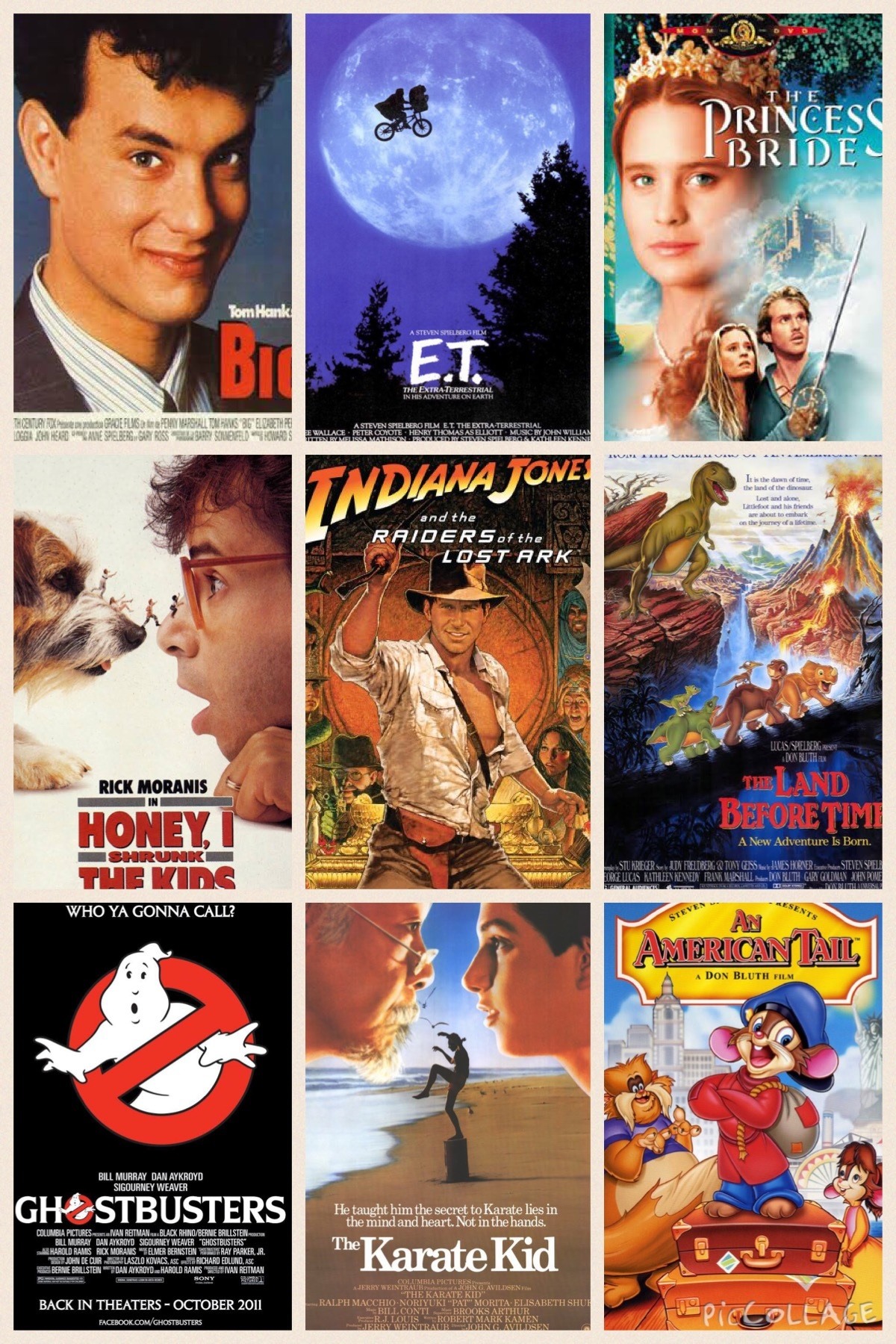 1. Back to the Future 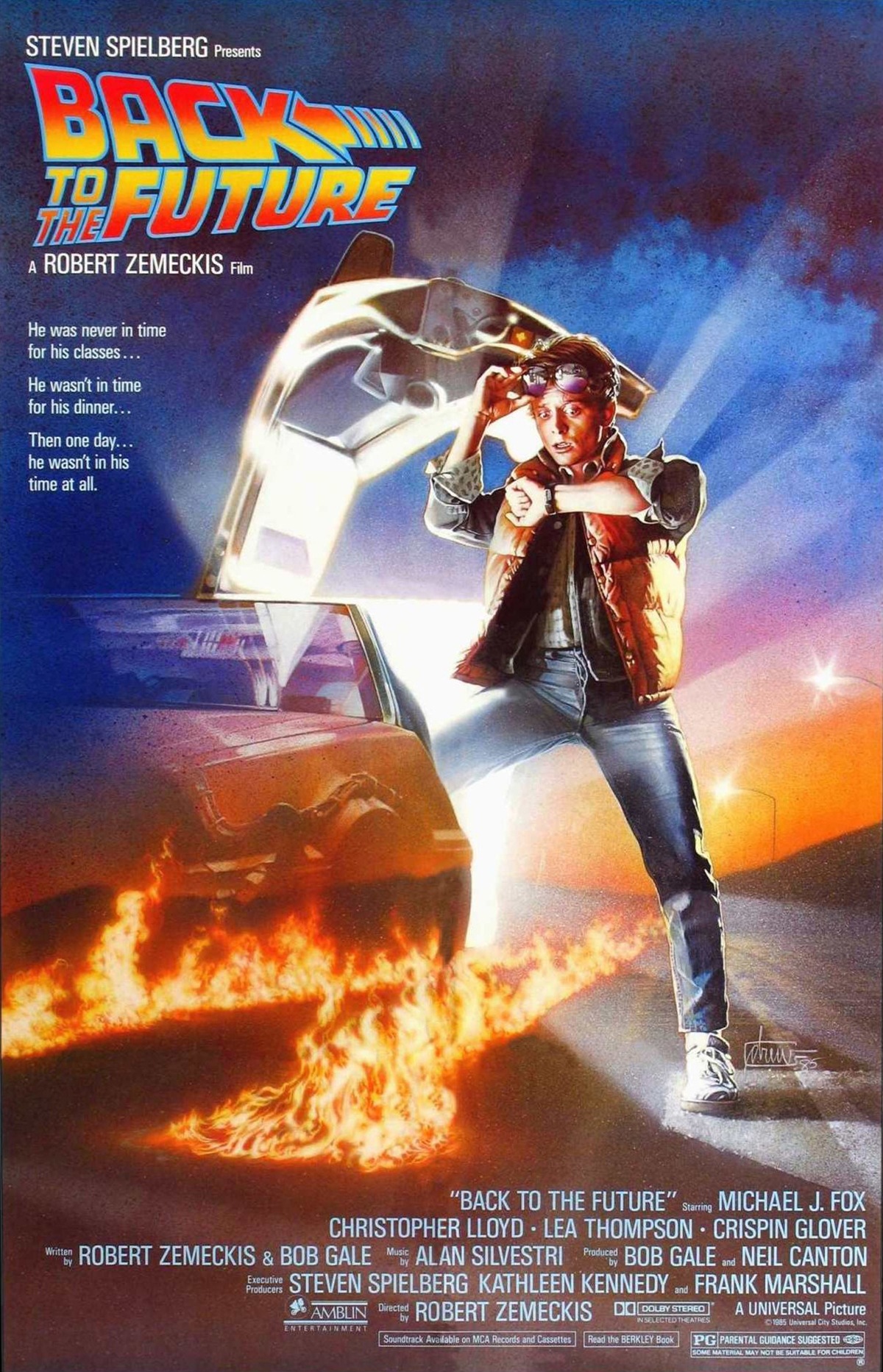 For many of us 80s kids, the Back to the Future trilogy is a big part of our youth. From the classic original film, to the futuristic (at least at the time) antics of the sequel, culminating with a wild (west) ride in the third and final film, Marty and Doc’s adventures thrilled us from start to finish. Back to the Future spent 11 weeks at number one in the US, going on on to gross $210.61 million in North America and becoming the the top grossing film of 1985. ‘Box Office Mojo’ estimates that the film sold over 59 million tickets in the US. 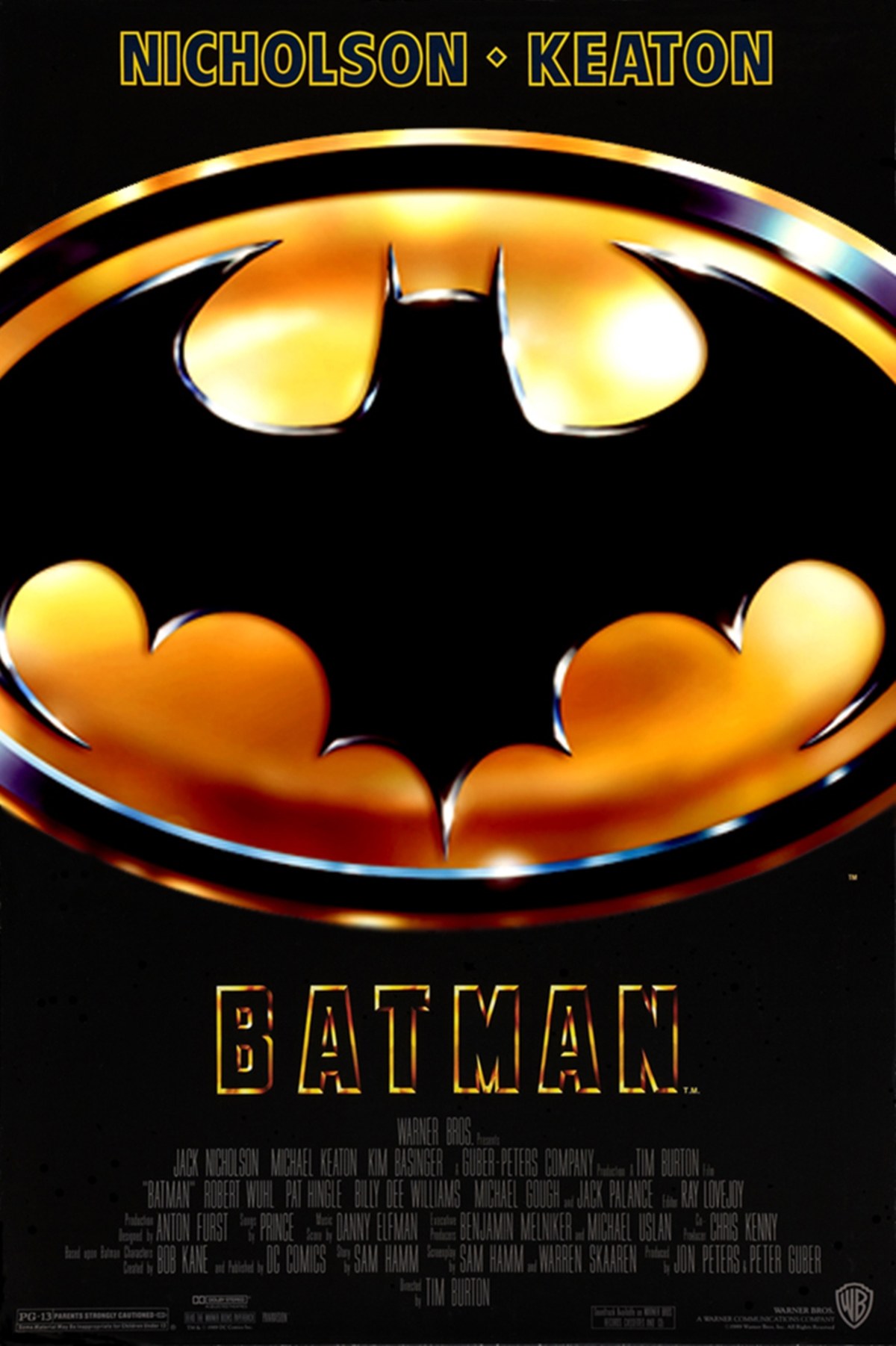 As good as the Christopher Nolan directed Batman trilogy was, we still have so much love for Michael Keaton in the role, especially in the 1989 film. Batman was the first film to earn $100 million in its first ten days of release, and was the highest grossing film based on a DC comic book until 2008’s The Dark Knight. 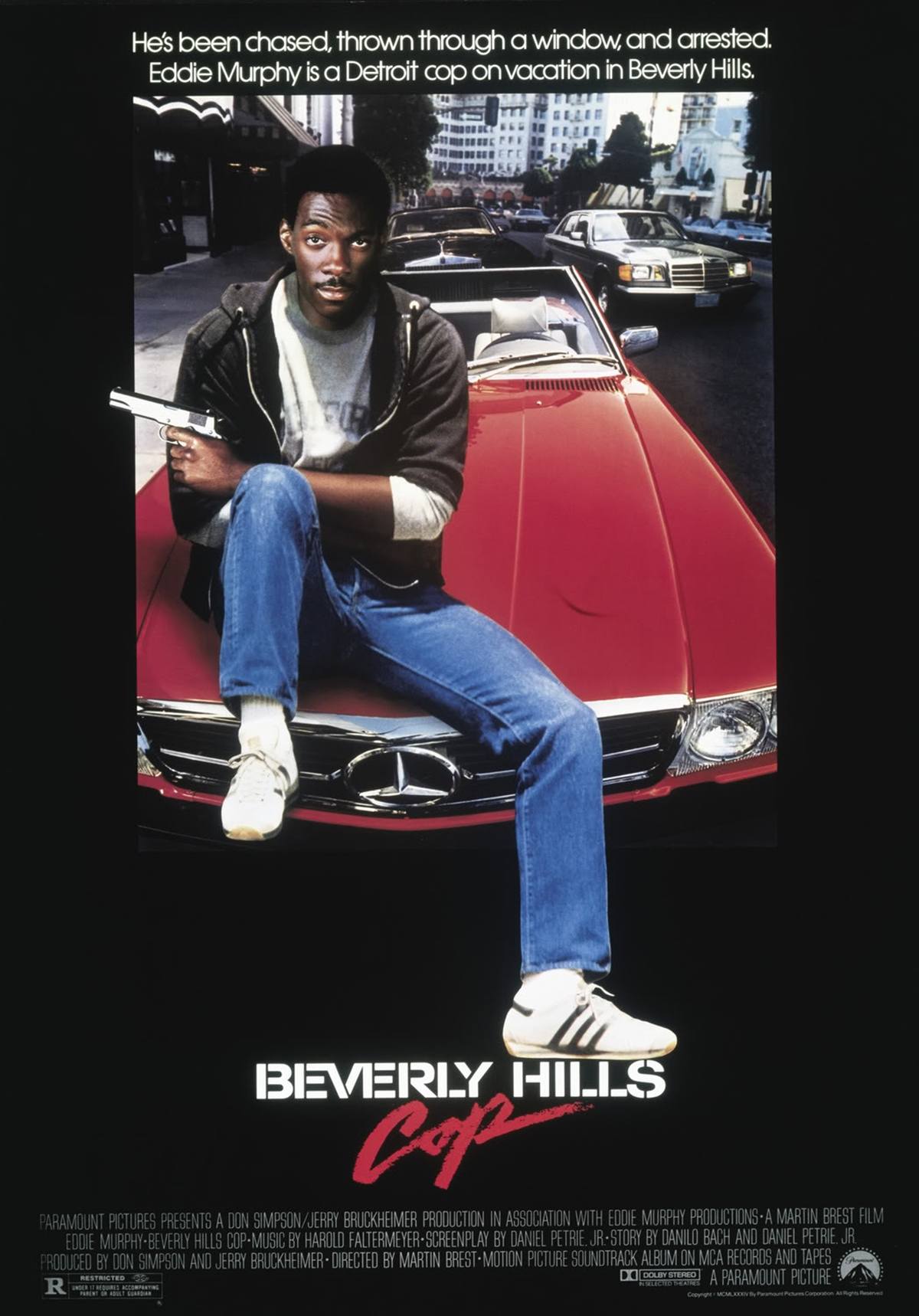 We all love Beverly Hills Cop, but did you know that there was almost a crossover with Crocodile Dundee? Yes, the former chairman of Paramount Pictures once revealed they had thought about making a crossover movie between the two film franchises (which would have been the 3rd film in both series). Apparently the idea was thrown in the bin when they found out that Murphy wasn’t particularly keen on it (no word on whether Paul Hogan was game). Beverly Hills Cop made $15,214,805 in its first five days of release, but thanks to positive word of mouth, the film generated higher revenue in the weeks that followed, with the highest gross being in its 4th week of release when it made $20,064,790 in 5 days. 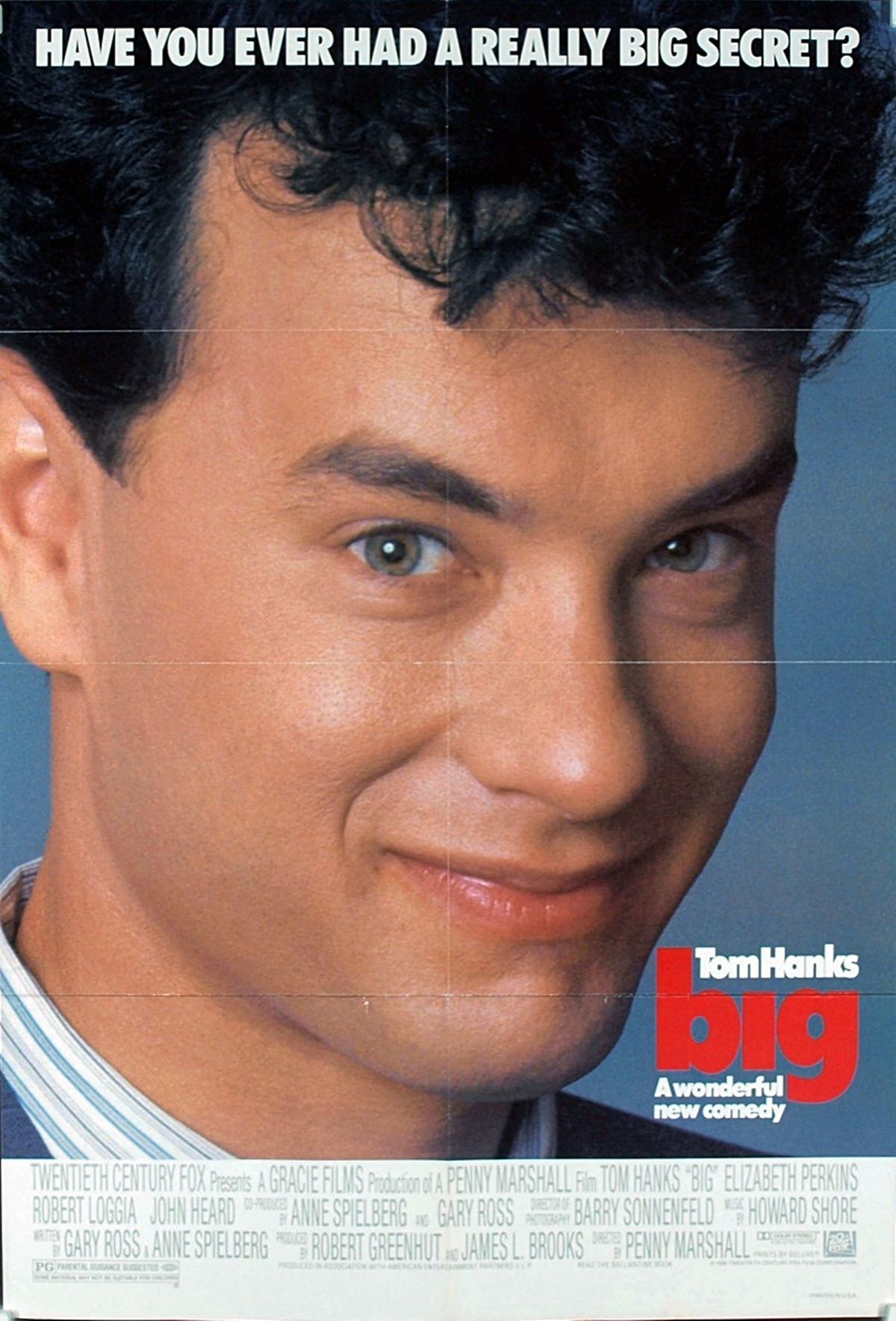 Big of course starred Tom Hanks as Josh Baskin, a young boy who has his ‘to be big’ granted overnight. Who doesn’t think of the scene in the toy shop every time they see one of those giant pianos? Surely you’ve seen this classic 1988 film a number of times over the years? 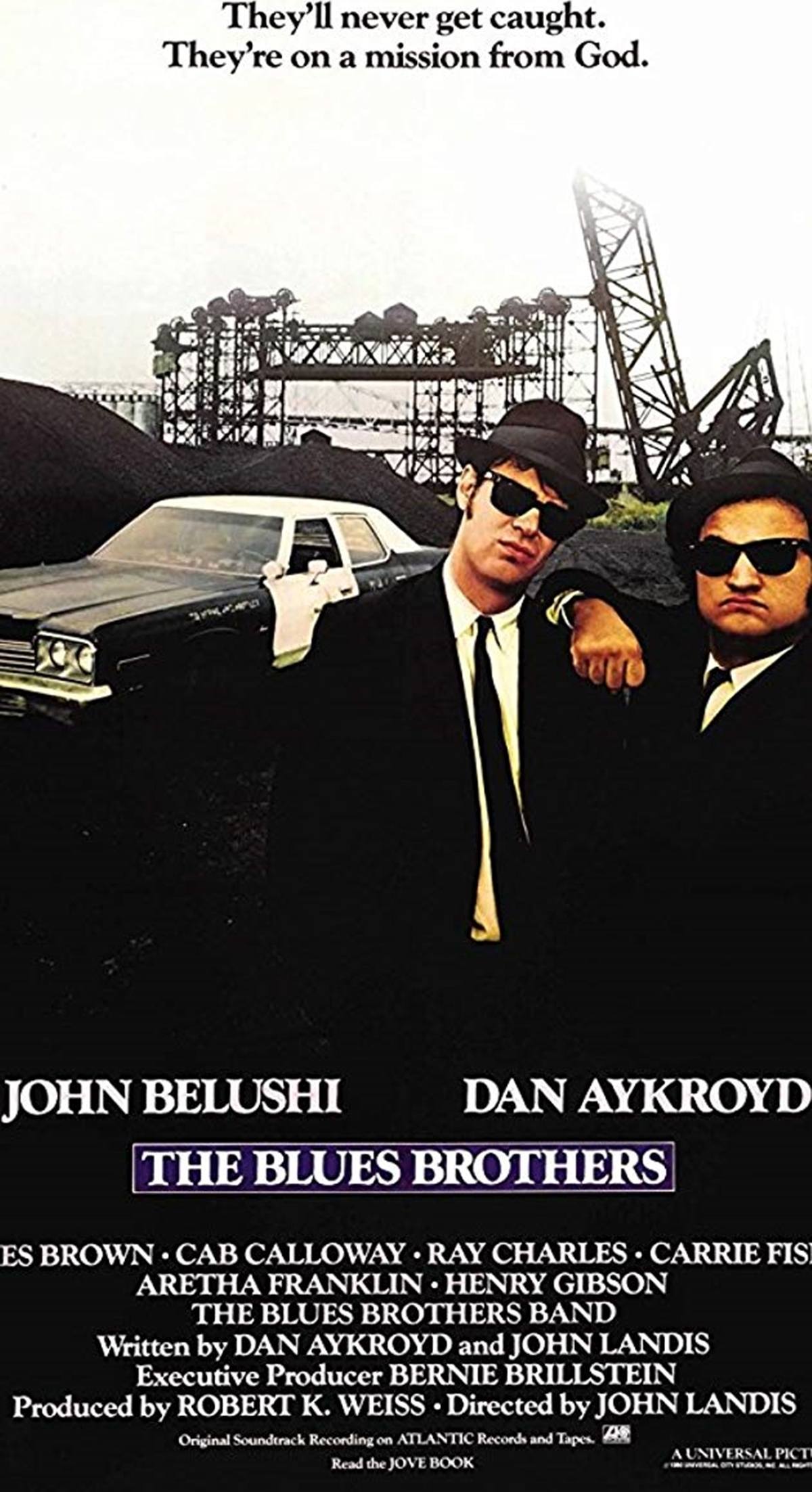 The Blues Brothers was directed by John Landis and starred John Belushi and Dan Aykroyd as Jake and Elwood Blues, characters developed from ‘The Blues Brothers’ musical sketch first seen on Saturday Night Live. It is the highest grossing comedy film of the 1980s, and legend has it that the film’s shoot made provision for cocaine in the budget to help the cast and crew get through the long nights of shooting! 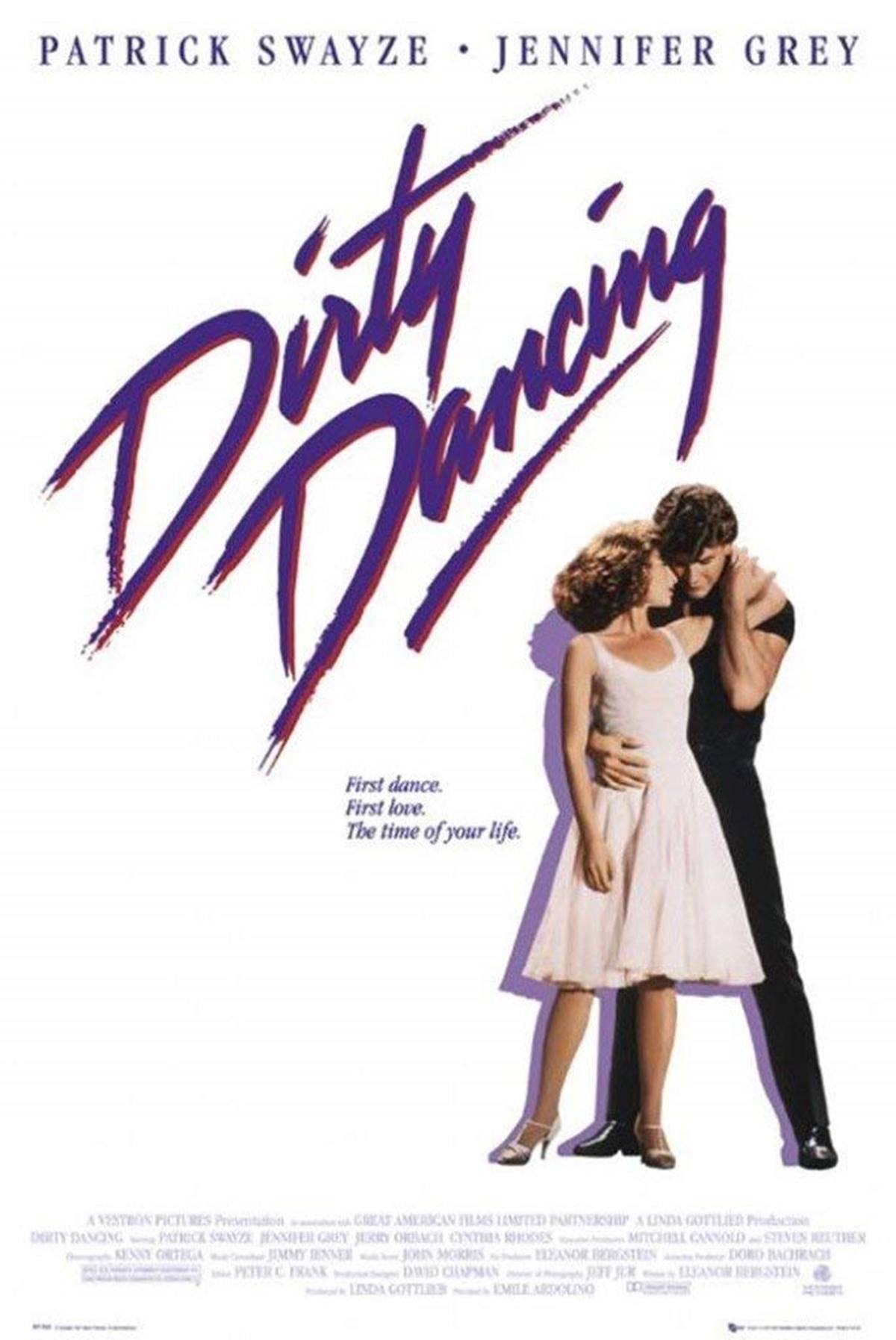 Dirty Dancing is an American romantic drama and dance film written by Eleanor Bergstein, directed by Emile Ardolino and starring Patrick Swayze and Jennifer Grey. I’m sure there are thousands of women (and men), who would name Dirty Dancing as one of their favourite ever films. It’s the kind of feel-good film that you could watch on a rainy, depressing Saturday evening, and immediately be swept away into the sensual arms of Johnny (Patrick Swayze) and Baby (Jennifer Grey). 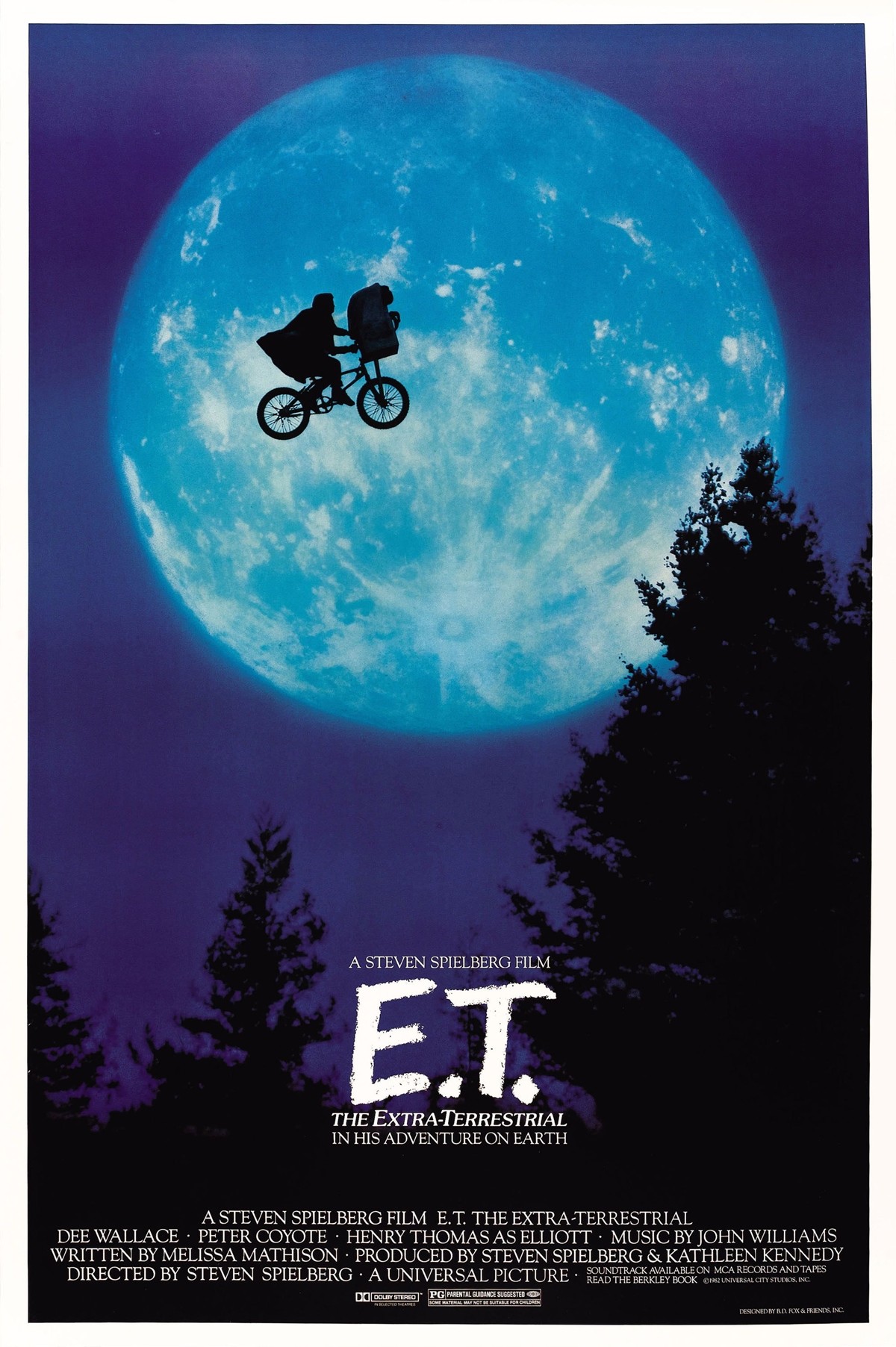 E.T. the Extra-Terrestrial was released in the US on 11th June, 1982, opening at number 1 with a gross of $11 million, and staying at the top of the box office for 6 weeks. By the end of its theatrical run it had grossed $359 million in North America and $619 million worldwide, with Spielberg earning $500,000 a day from his share of the profits. The scene where E.T. becomes ill and collapses next to a river sent us into floods of tears as a child. Thankfully he does of course recover, otherwise the scene where he flat-lines and Elliot screams would have sent us into therapy for the rest of our life! 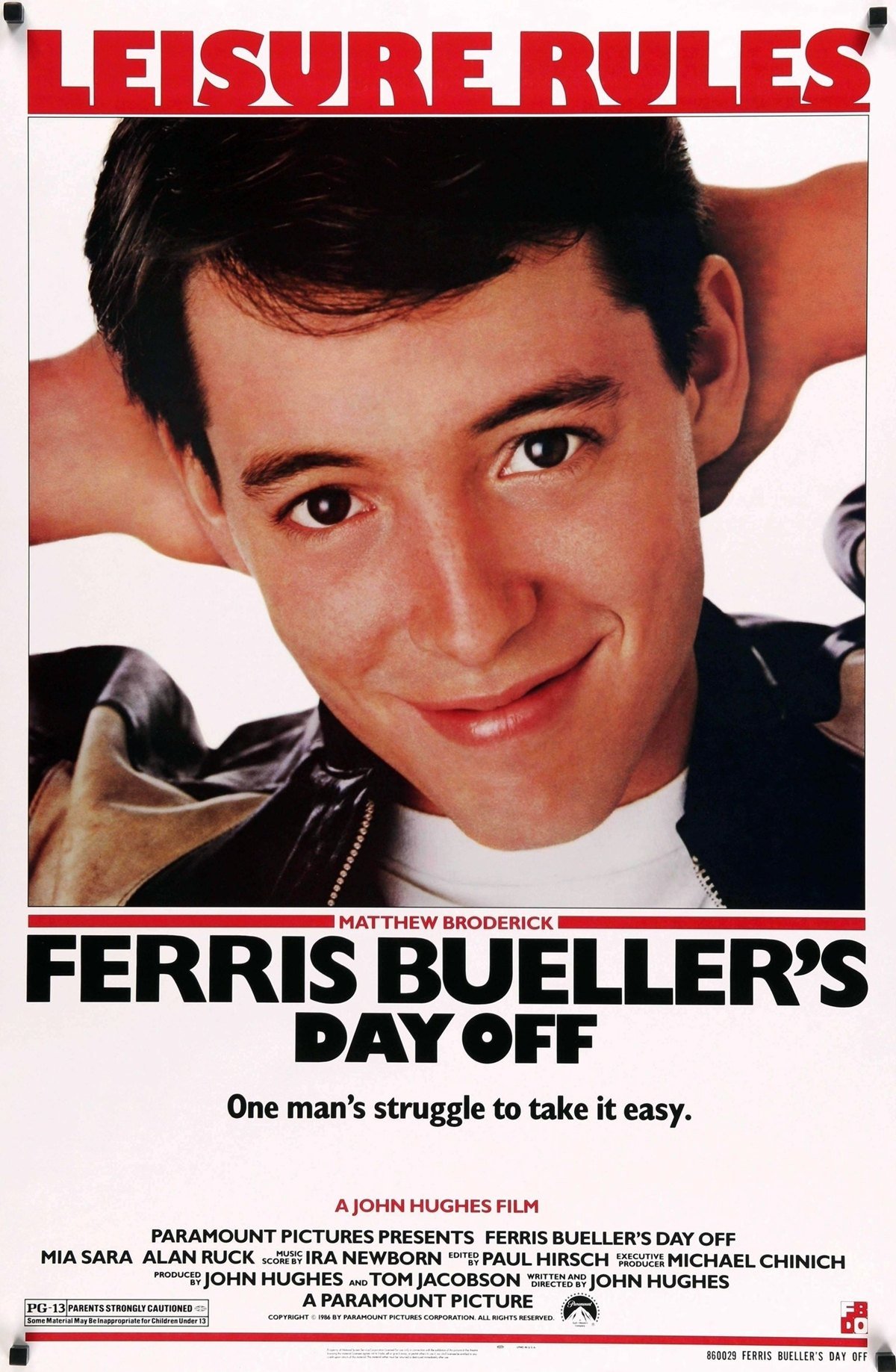 The unforgettable teen-focused comedy film was written, co-produced and directed by John Hughes, and starred Matthew Broderick as Ferris Bueller, a high-school loser who takes a day off from school. We consider it one of the greatest films of the 1980s, so if you haven’t watched it then you should rectify that immediately! 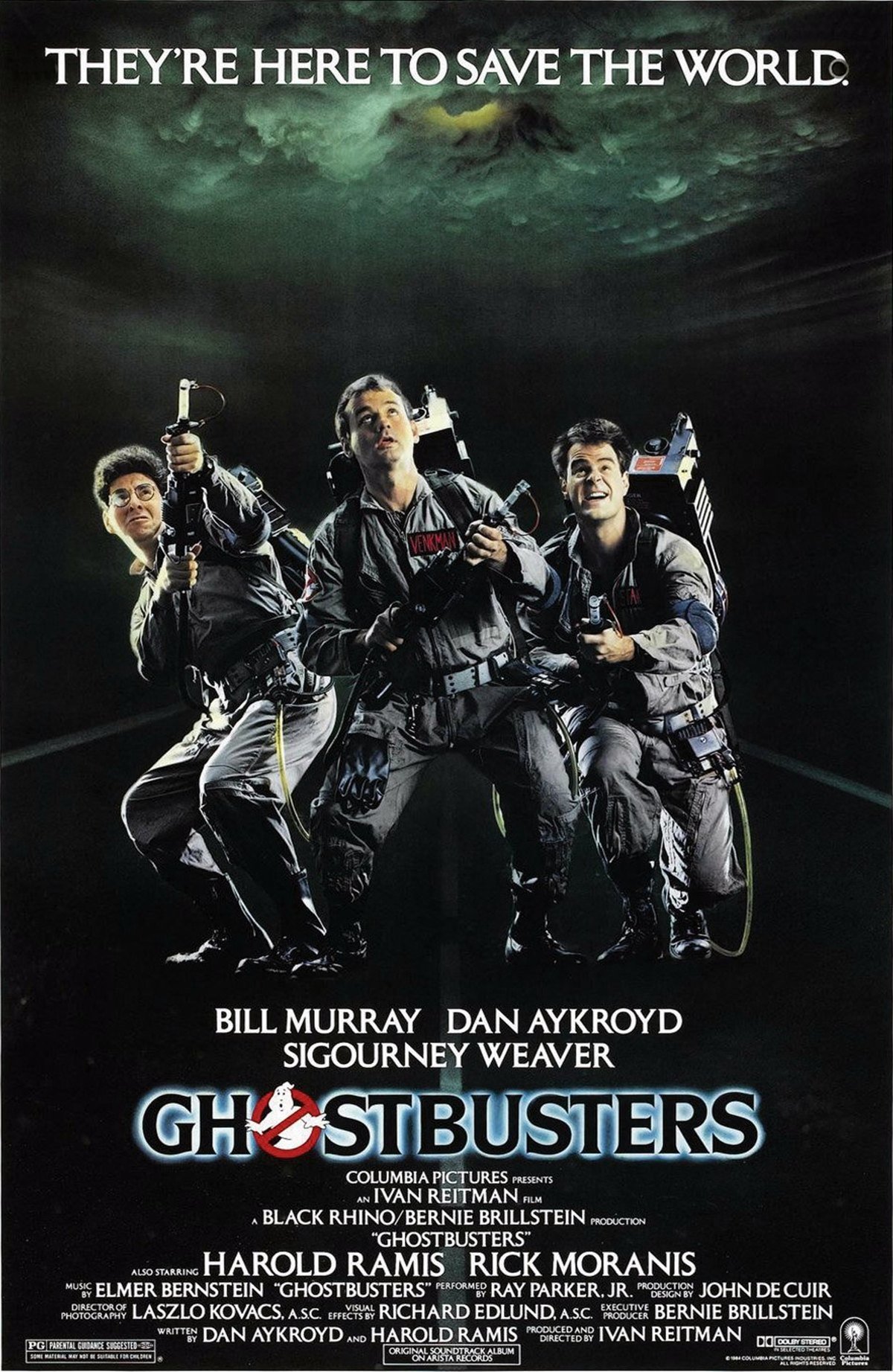 The brilliant Ghostbusters grossed $13.6 million on its opening weekend and $23 million in its first week, setting studio records at the time. The film was number 1 at the box office for five consecutive weeks, grossing $99.8 million, but after seven weeks it was finally knocked off the top spot by Prince’s film ‘Purple Rain’. John Belushi and Eddie Murphy were originally supposed to be in the film, but Belushi tragically died before the film started shooting, and Murphy decided to star in Beverly Hills Cop instead. 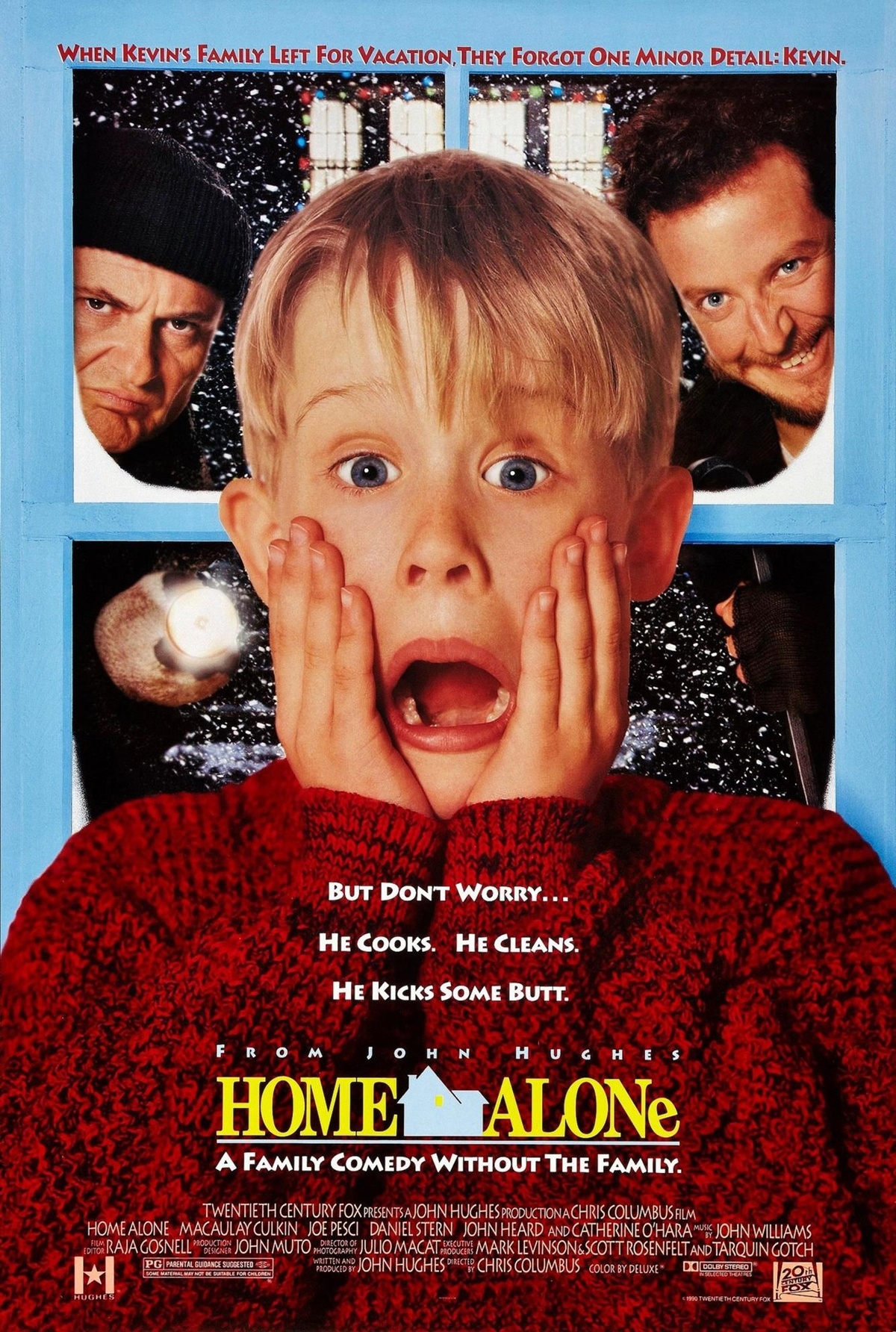 Christmas is a time of year when many of us like to cosy up indoors and watch our favourite feel good festive film, and of course, one of the films that many of us list as being a favourite is Home Alone. It makes us feel happy and warm inside whilst also giving us some hilarious slapstick comedy, and we know that many of you watch it at least once a year! 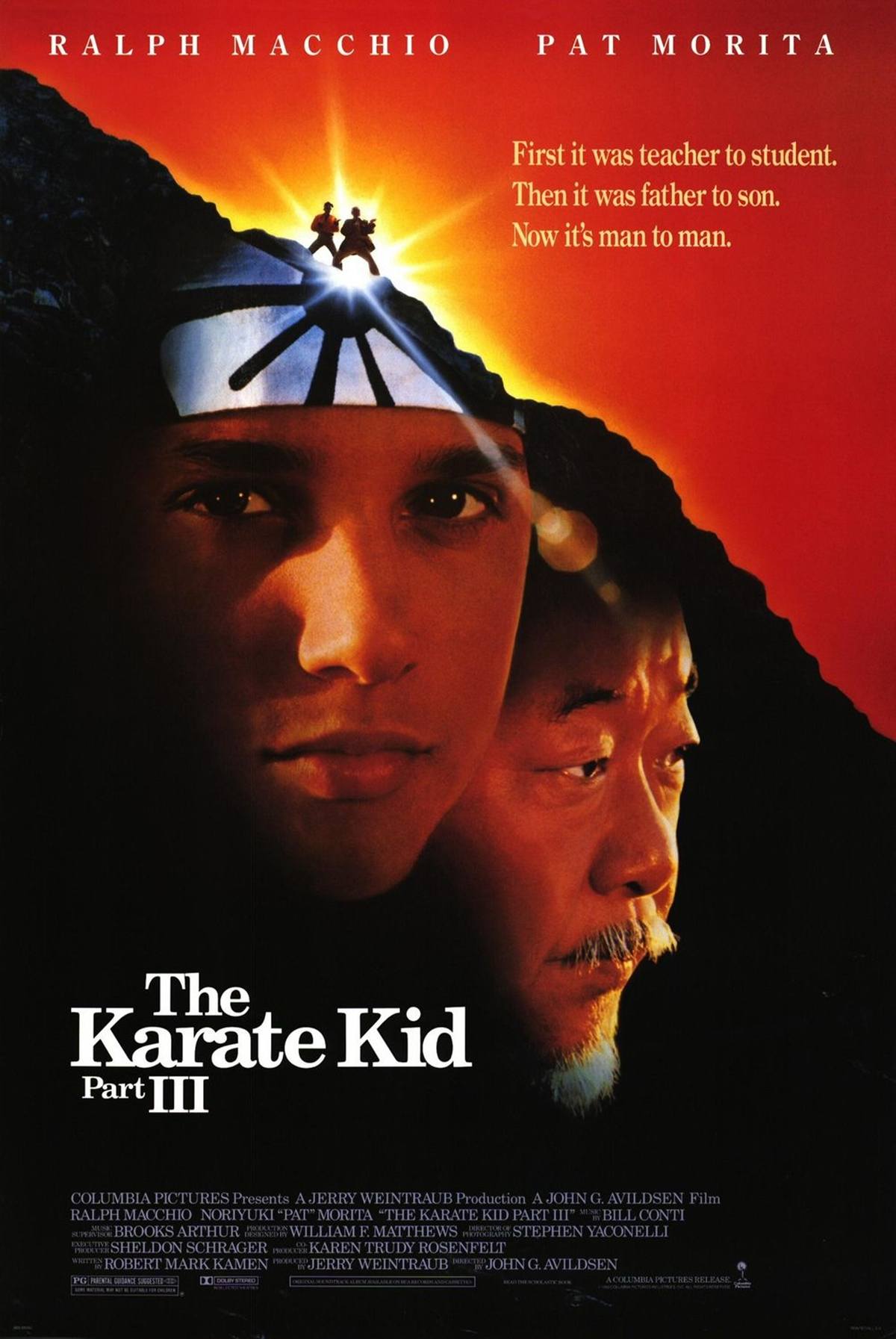 We know that many of you were massive fans of The Karate Kid during your childhood. Starring the gorgeous Ralph Macchio Jr. as Daniel LaRusso, The Karate Kid had us acting our our best Karate moves on our unsuspecting younger siblings! Believe it or not, during filming, actor Ralph Macchio was actually aged 22, with many of the cast refusing to believe him when he told them how old he was! 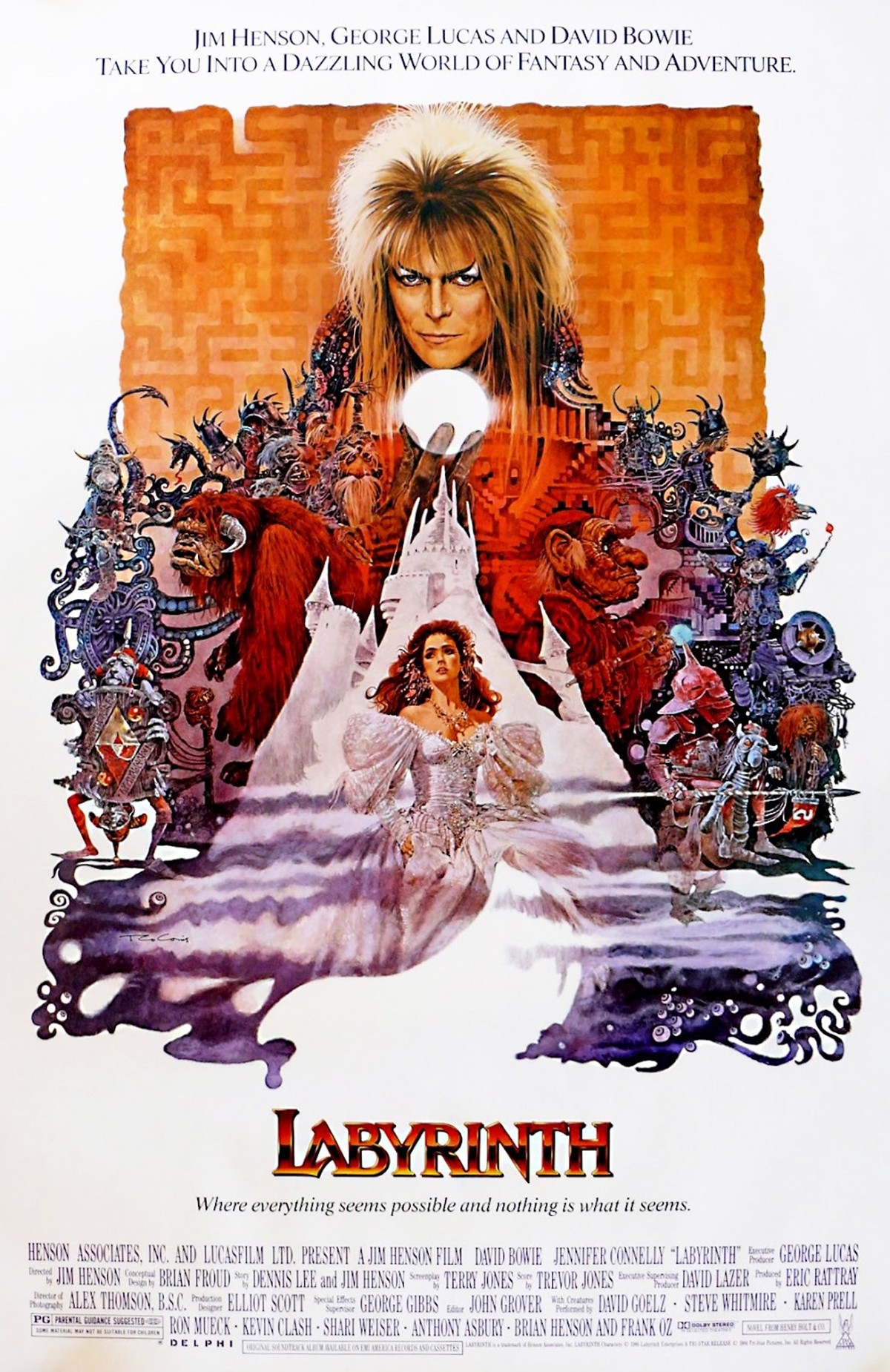 Labyrinth is a classic musical fantasy film that we know many of you love, especially for its classic songs and brilliant performance by the late legend that is Mr Bowie. The search for someone who had both the acting and singing talents required to play Jareth meant that the choice was eventually narrowed down to either Michael Jackson or Bowie. Can you imagine the late Jackson in the role though? The film had a budget of $25 million and proved to be a big box office disappointment, grossing only $12.9 million in the US, but it has since gained a large cult following. 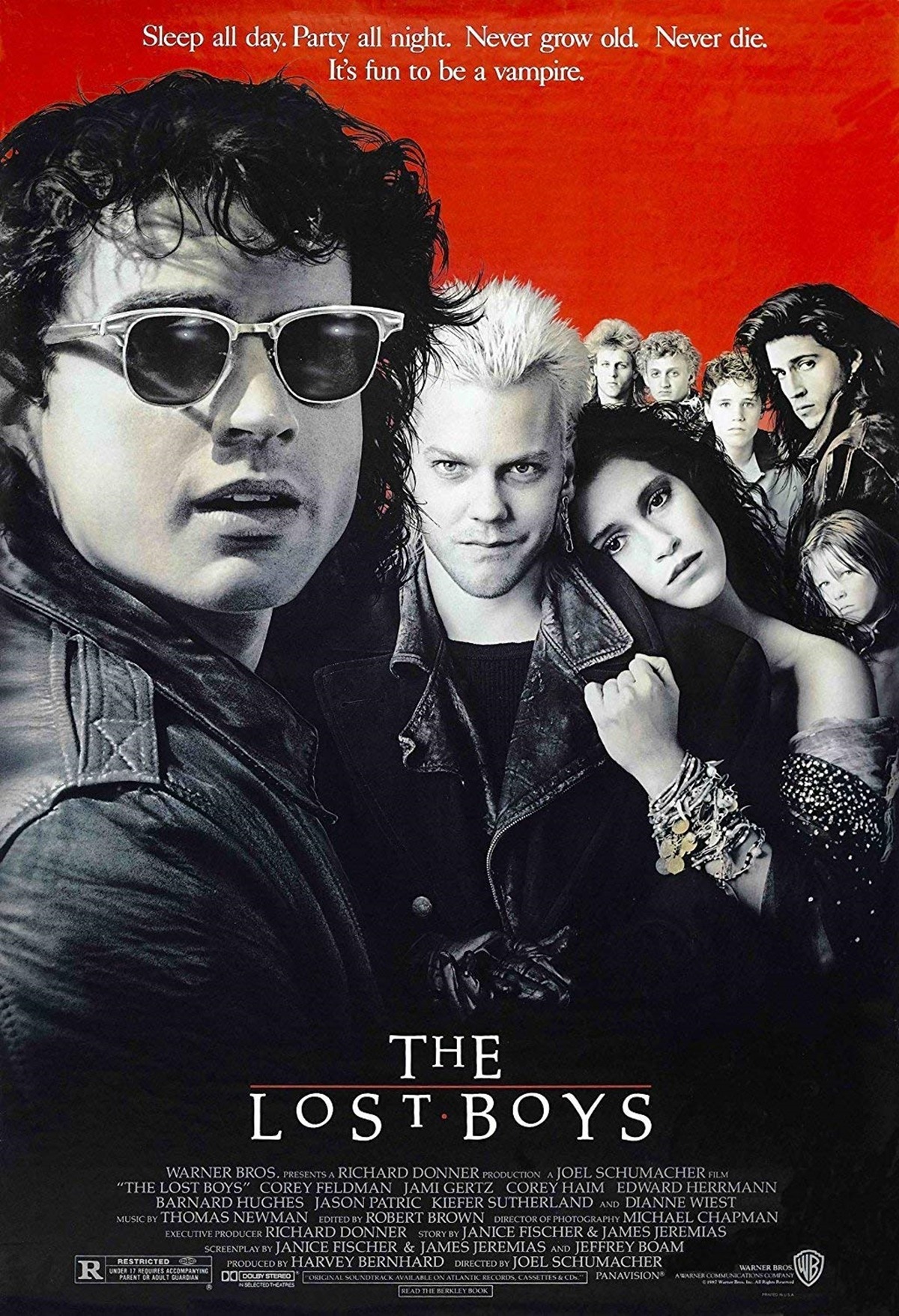 The Lost Boys has been making vampires cool since 1987, and we also have alot of love for its brilliant soundtrack. Featuring 2 tracks by INXS meant that the music was always going to replicate the cool feel of the film itself, but it also contains brilliant songs by the likes of Echo and the Bunnymen and Eddie and the Tide. 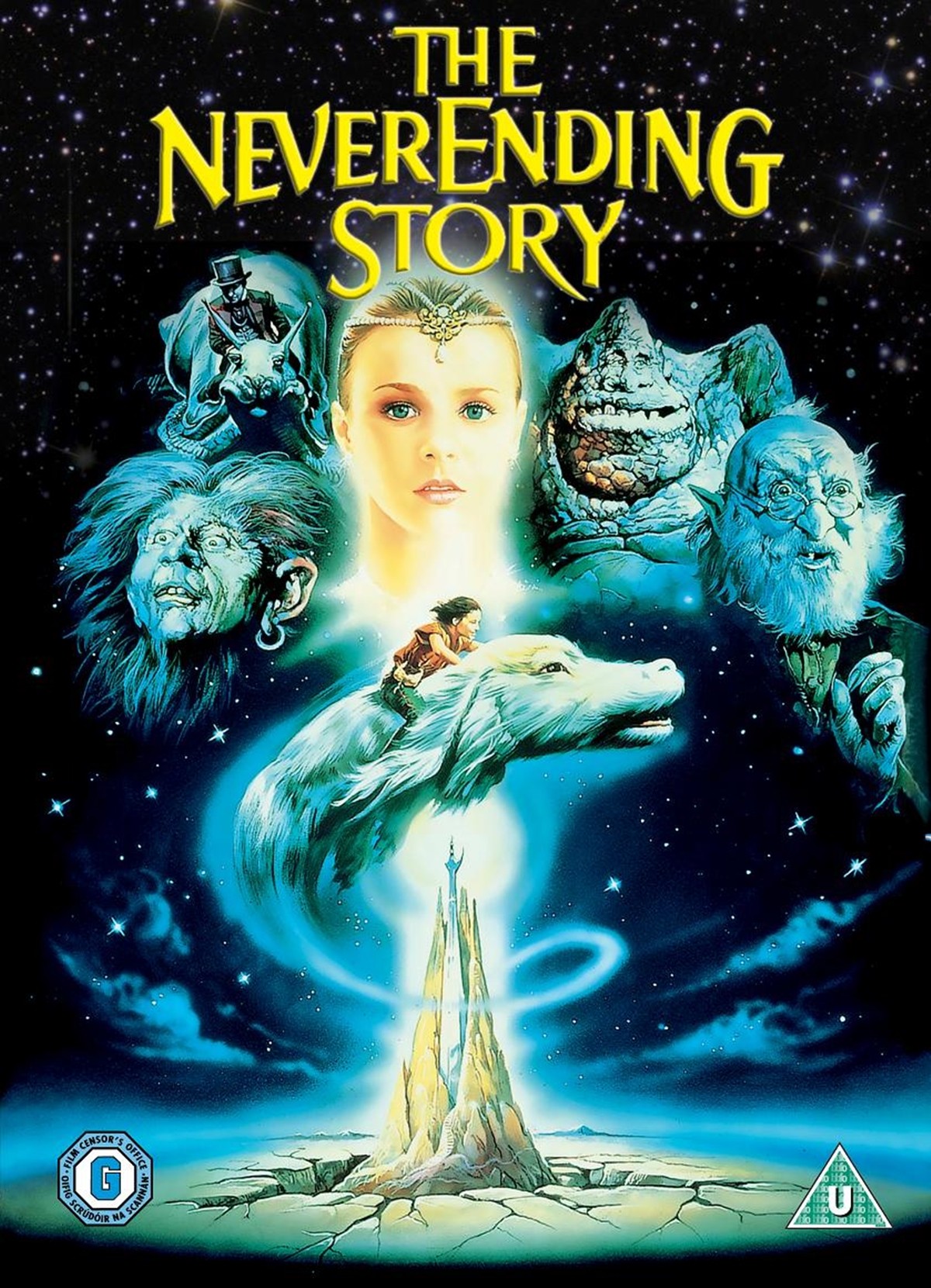 Usually we can’t think bout The NeverEnding Story for too long, as the image of Artax the horse slowly sinking into the swamp of sadness is likely to uncover some repressed childhood trauma and send us into a breakdown! That scene actually took a really long time to film, mainly because it took trainers 7 weeks to teach the horse to stand still on a moving platform without trying to escape!

15. A Nightmare On Elm Street 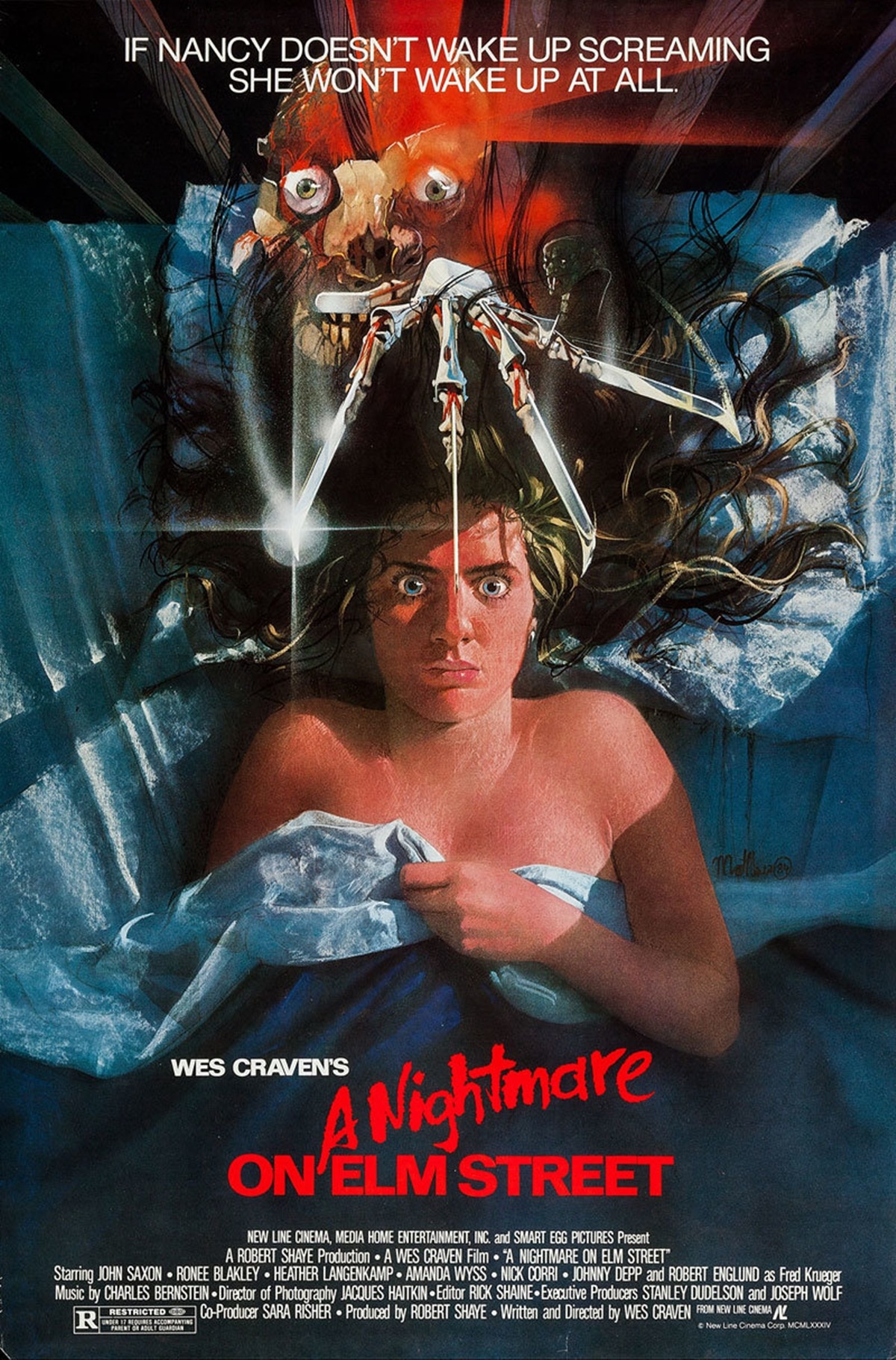 Freddy Krueger is often at the top of lists looking to identify the greatest horror movie bad guy of all time, and it’s no real shock. Nightmare on Elm Street has terrified generations of film lovers, whether they saw the films when they were released in the cinema, or have watched them at home in the years that followed. Unlike many other horror franchises, Robert Englund was the only person ever to play this classic role, and we can’t imagine that they will ever try to re-make it with a different actor.

16. Raiders of the Lost Ark 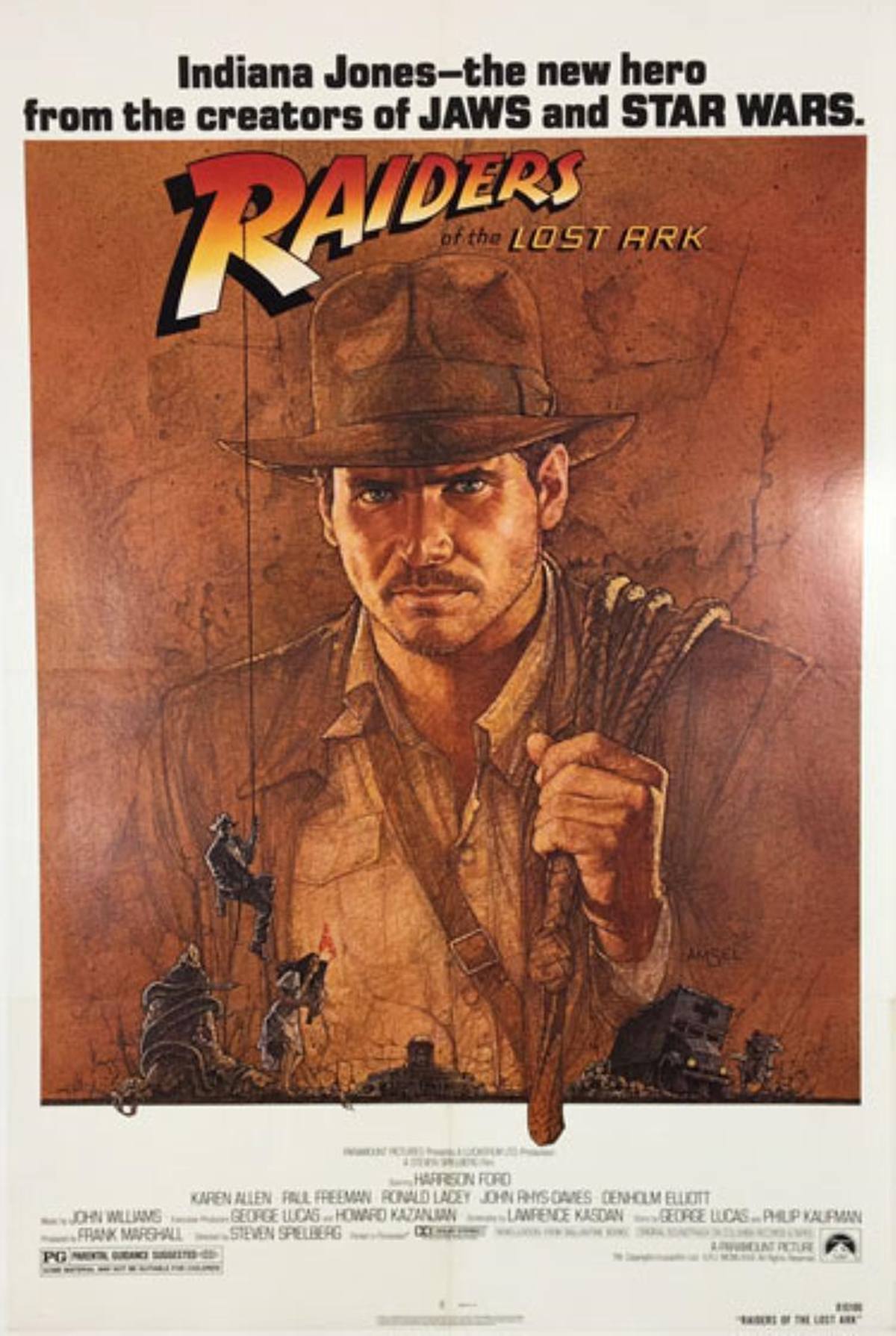 Raiders of the Lost Ark was the fifth highest grossing film of the 1980s, but did you know that it was made with a budget of only $18 million? Not only that, but it originally only opened at number 14 in the US. 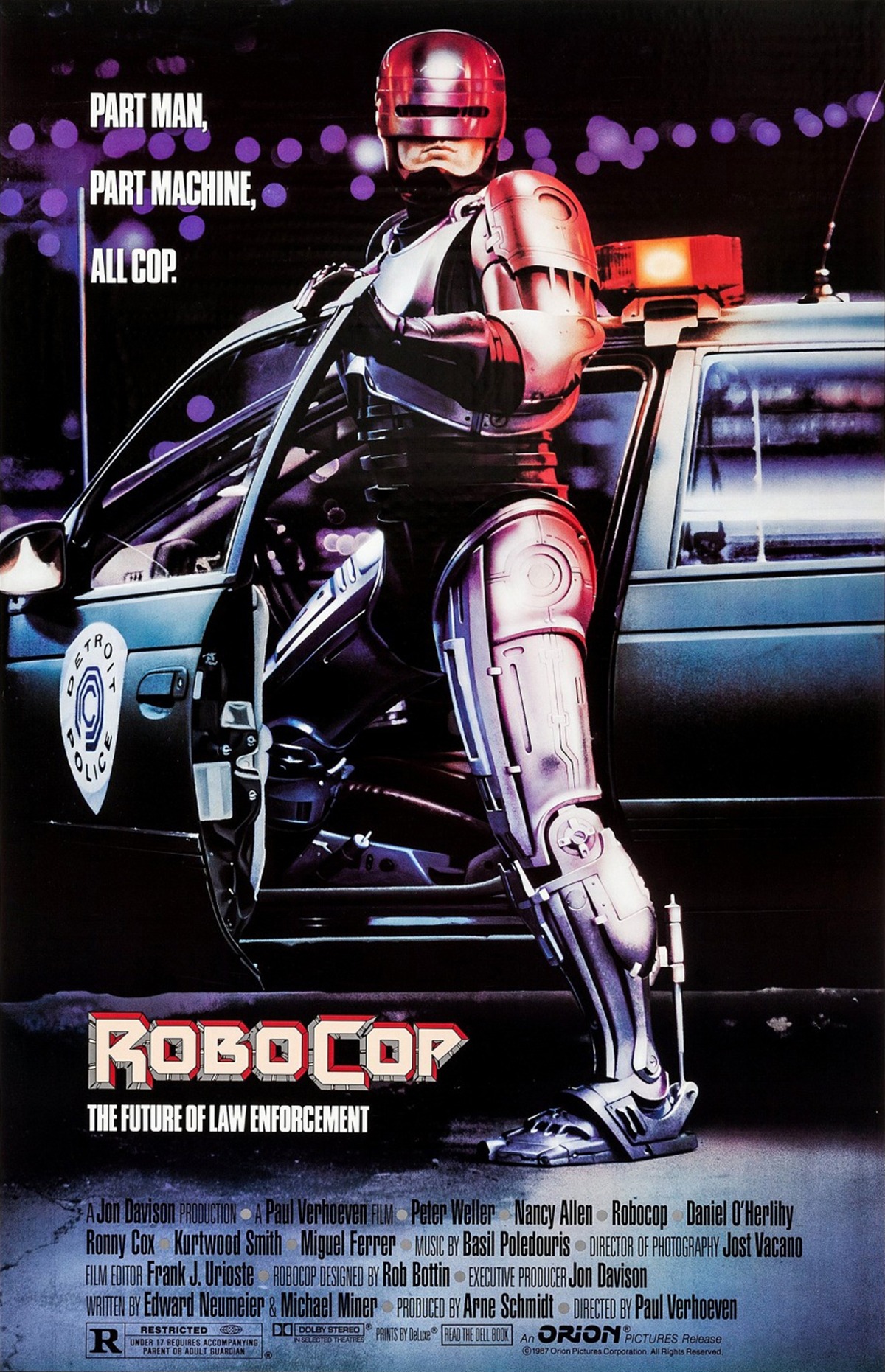 RoboCop is a 1987 American cyberpunk action film directed by Paul Verhoeven and starring Peter Weller. Set in a crime-ridden Detroit, Michigan, in the near future, RoboCop focuses on police officer Alex Murphy (Weller) who is murdered by a gang of criminals and later revived by the megacorporation Omni Consumer Products as a superhuman cyborg law enforcer known as RoboCop. We know that many of you are big fans of this film and you may have seen it multiple times, but did you know that the character of RoboCop itself was actually inspired by British comic book hero Judge Dredd? 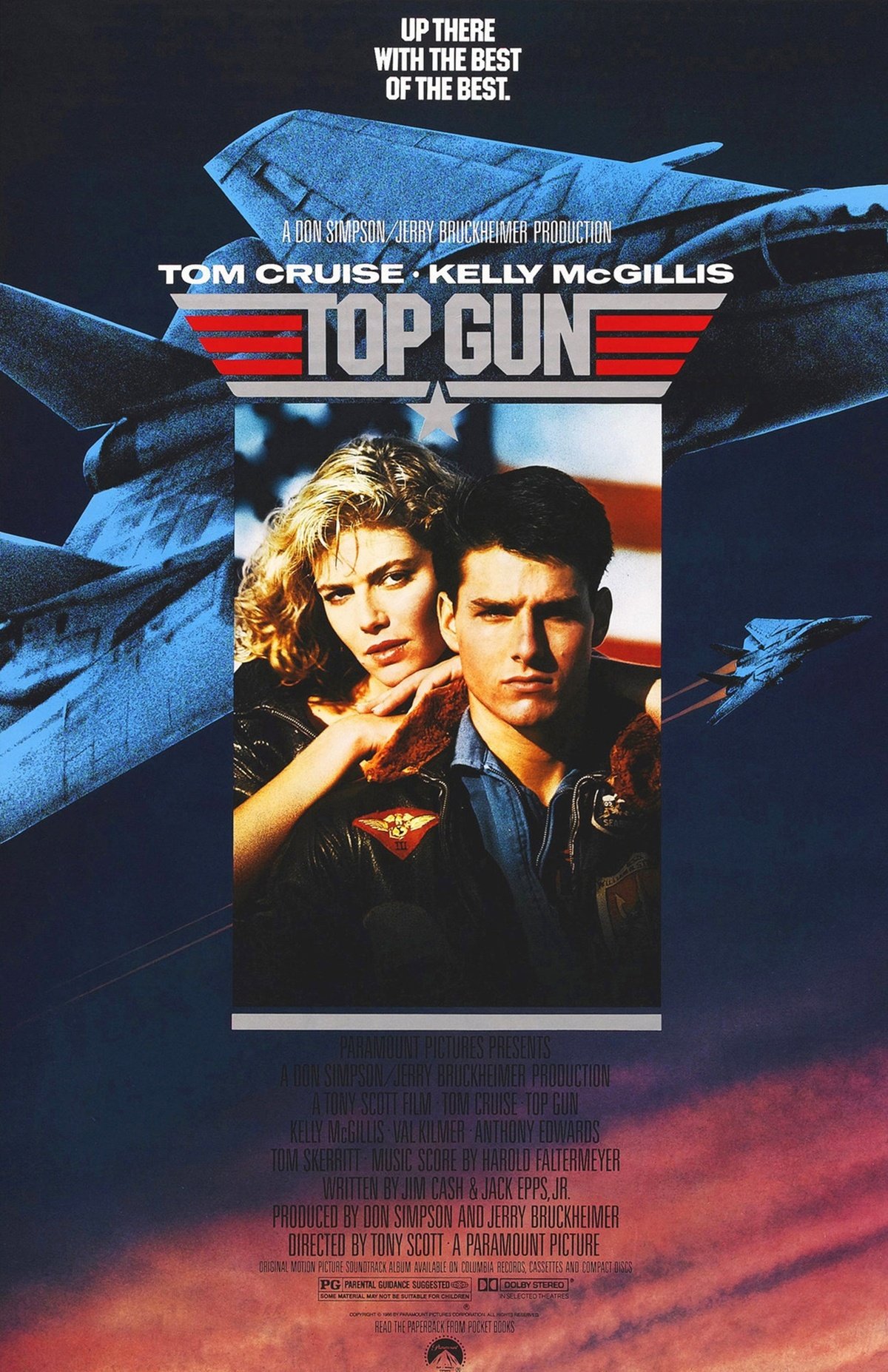 Top Gun is one of the defining films of the 1980s, forever giving us a ‘need for speed’, as well a love for Tom Cruise in his Navy uniform. It was the highest grossing film in 1986, bringing in $353 million worldwide. The film’s soundtrack was also massively successful, selling over 9 million copies and spending 5 weeks at number one. It also won the Academy Award for Best Original Song for ‘Take My Breath Away’, which was performed by Berlin and produced by Giorgio Moroder. The film had a massive impact on the public consciousness. Sales for Ray-Ban’s Aviator sunglasses jumped 40% after the movie premiered, and the US Navy reported that after the film they saw a 500% increase in young men interested in becoming Naval Aviators. 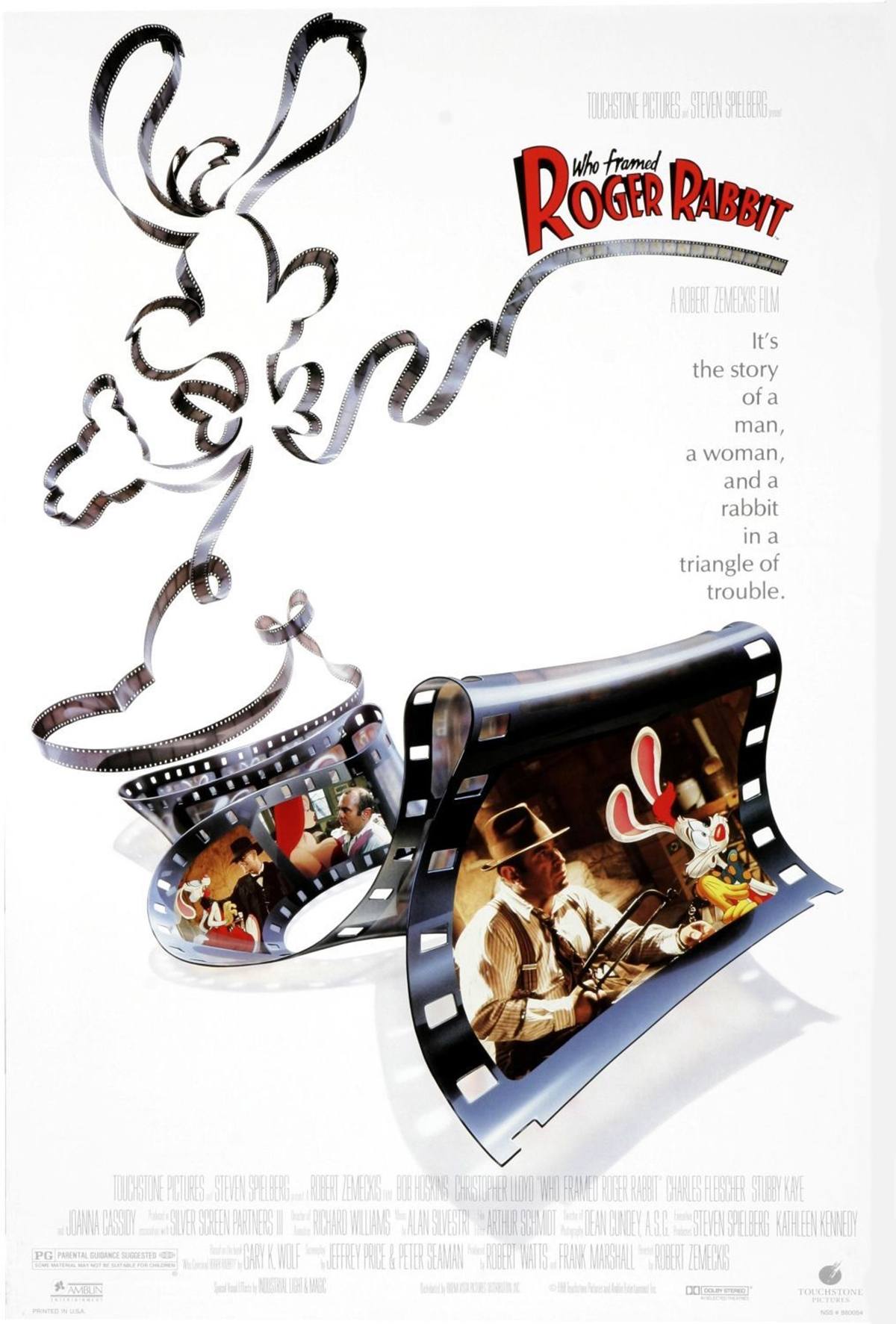 Who can forget the mixture of live action and animation in Who Framed Roger Rabbit? And who can forget Jessica Rabbit? And we don’t know about you, but when bad guy Judge Doom kills a lovely cute squeaking shoe by slowly lowering him into a bath of acid it gave us nightmares for years! 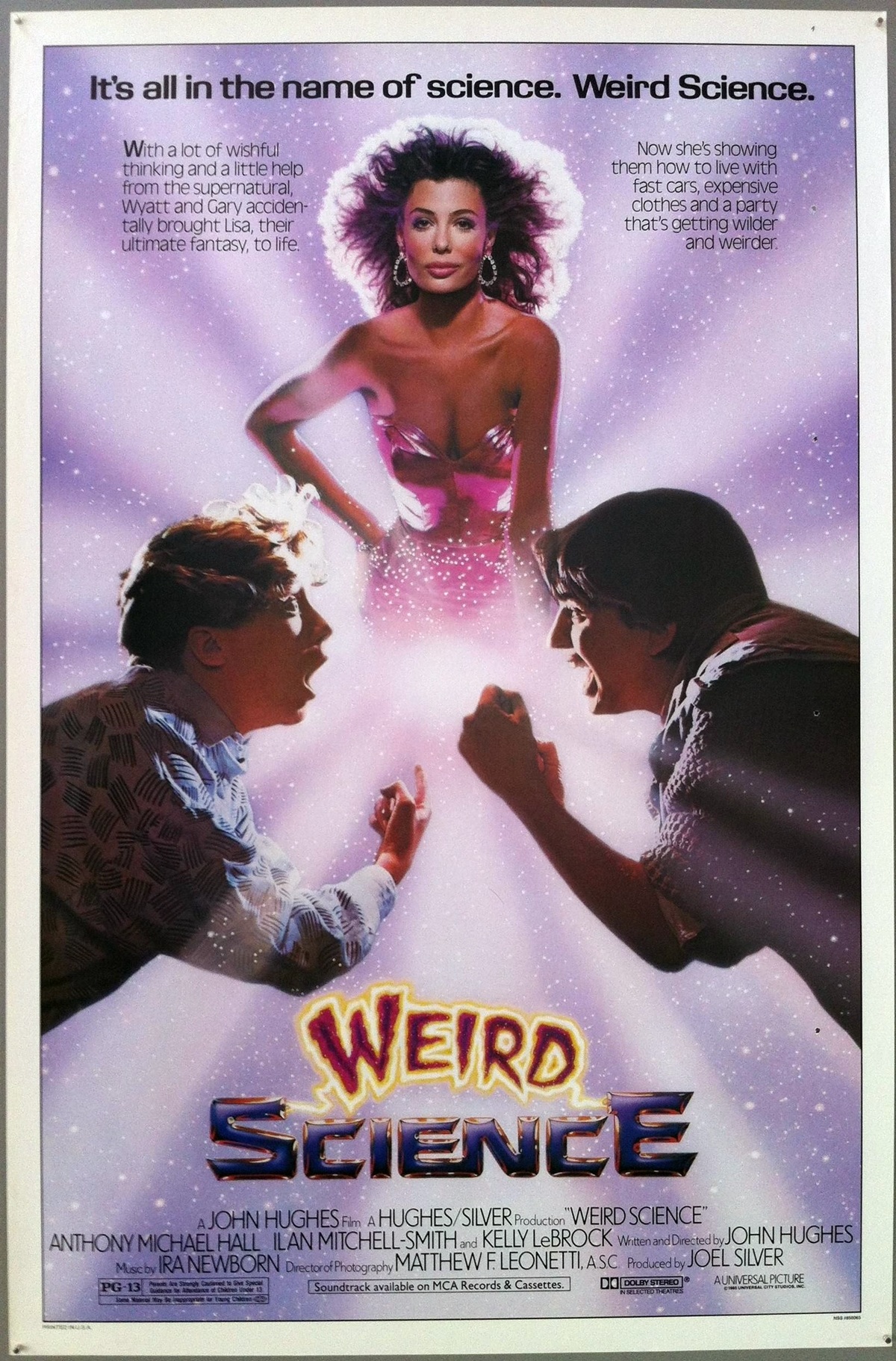 Another film completely panned by critics but which us children of the 80s remember with much fondness, Weird science was of course written and directed by John Hughes and starred Anthony Michael Hall, Ilan Mitchell-Smith, and Kelly LeBrock. If you’ve never seen it then you’re definitely missing out.

So, how many of the movies have you watched? Please do let us know, and be sure to share this post with your fellow 80s kids, so that they too can count up how many they have or haven’t seen!