Ian Holm Actually Played Frodo In The Lord Of The Rings

The beloved Lord of the Rings trilogy, with its sweeping landscapes, spectacular battles and epic length, is far from the easiest tale to adapt. J R R Tolkien himself was famously prickly about adaptations of his work. But a 1981 BBC Radio production proved a major hit with audiences, long before Peter Jackson’s blockbusters reached the big screen.

Among the cast was Ian Holm, who voiced Frodo and spent many joyful weeks recording the production at the BBC’s Broadcasting House in London. For Holm, this role was more than an income – it helped to put his career back on track, following his sudden departure from the world of theatre. The success of the BBC radio adaptation even helped him secure the role of Bilbo in the record-breaking movies of the early 00s. 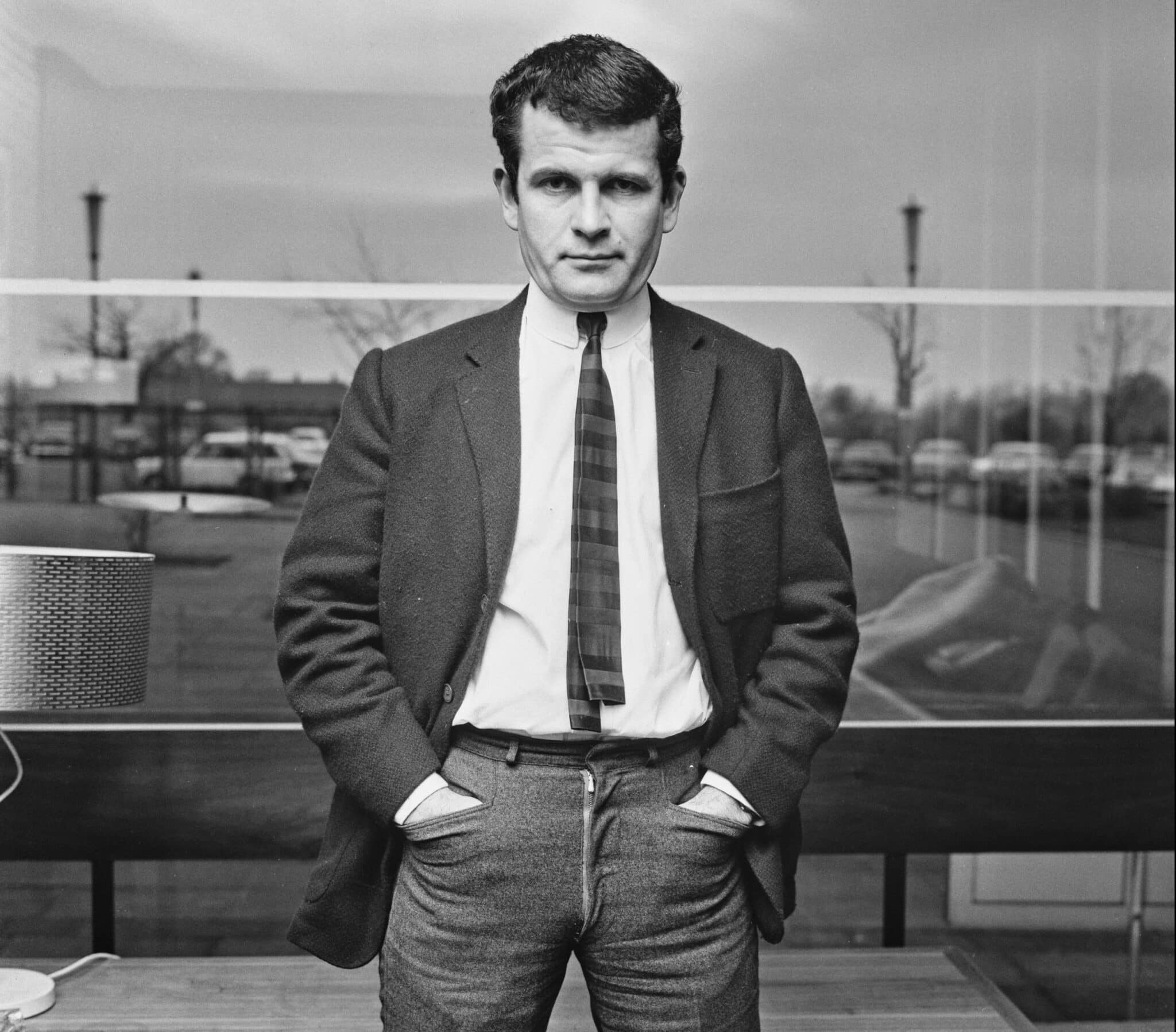 Holm himself called his troubles the “actor’s industrial illness.” Born in 1931 and raised in Essex, Holm was a star of the stage through the 50s, 60s and 70s, performing with the Royal Shakespeare Company and picking up minor movie roles in Oh! What a Lovely War (1969) and Young Winston (1972). It seemed that this celebrated classical actor could well become a movie star.

But then stage fright struck. In 1976, he experienced such a severe episode while performing The Iceman Cometh that he walked off-stage and wouldn’t return to the theatre for another eight years. In 1979, he starred as Ash in Alien, a role that helped introduce him to US audiences. But by the turn of the decade, suffering from panic attacks and anxiety, Holm was in desperate need of a break. 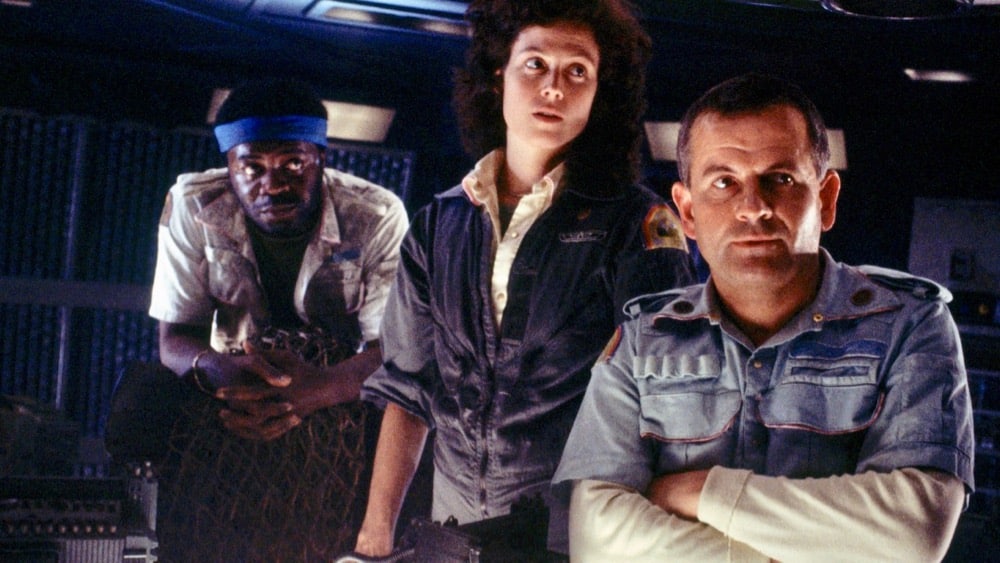 He took a trip to India with Sophie Baker, who was soon to become his second wife (his first was Lynn Mary Shaw, whom he divorced in 1965). Baker was working as a photographer and researcher, preparing an article about village life in the nation. She later wrote a book, Caste: At Home in Hindu India, based on her findings. Holm found the trip “enchanting,” and spent his days there sightseeing and recuperating.

When the couple returned to England, Holm struggled to find work that didn’t set off his stage fright – and his abrupt departure from the industry may have harmed his status too. He began to rely on voiceover work, which earned less money but protected him from the glare of the limelight. 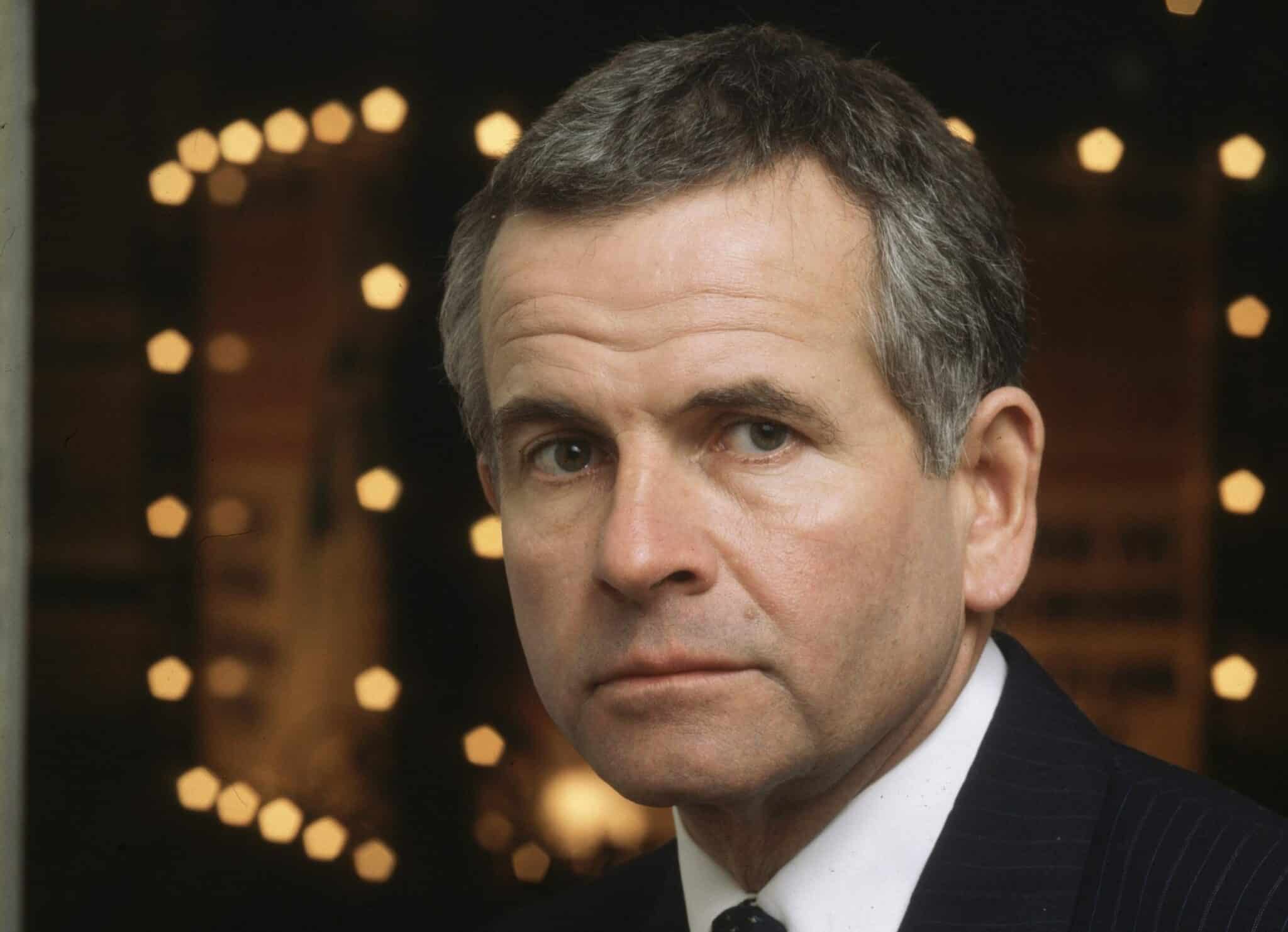 So in 1981, when he was cast in a BBC Radio production of The Lord of the Rings, Holm was elated. He was cast not as Bilbo – the on-screen role for which he’d later win fame – but as Frodo. In a star-studded selection, Holm was joined by Gerard Murphy (the narrator), Michael Hordern (Gandalf), Robert Stephens (Aragorn) and Bill Nighy (Sam Gamgee).

This was not the BBC’s first attempt at adapting J R R Tolkien’s beloved trilogy. In 1956, the novel was transformed into a 12-part BBC radio adaptation, featuring on The Third Programme. No recordings remain of this effort. Tolkien himself helped to annotate the script, but he was sorely disappointed with the result. 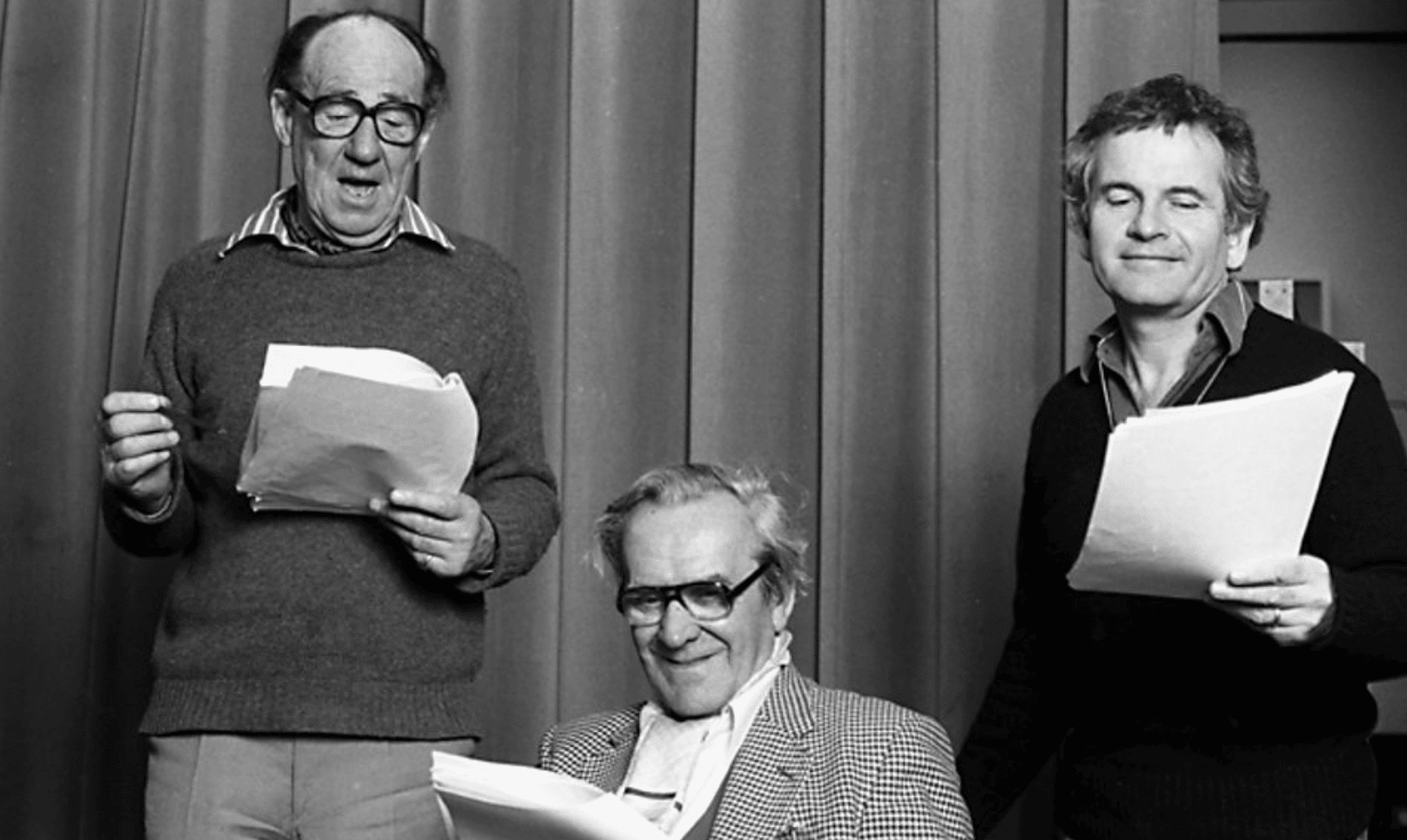 Just one year later, Tolkien alluded to his hatred of the BBC radio version in a letter to the film producer Al Brodax. “I should welcome the idea of an animated motion picture, with all the risk of vulgarization; and that quite apart from the glint of money, though on the brink of retirement that is not an unpleasant possibility,” he wrote. “I think I should find vulgarization less painful than the sillification achieved by the B.B.C.”

Tolkien passed away in September 1973, and so he never passed judgement on the later BBC adaptation starring Holm. But the programme was a massive success, and remains one of the most successful radio dramas of all time. Broadcast on Sunday lunchtimes and Wednesday evenings, it featured music by Stephen Oliver and, according to researcher Martin Baker, spawned fan groups, fan mail and regular re-broadcasts in the following years. 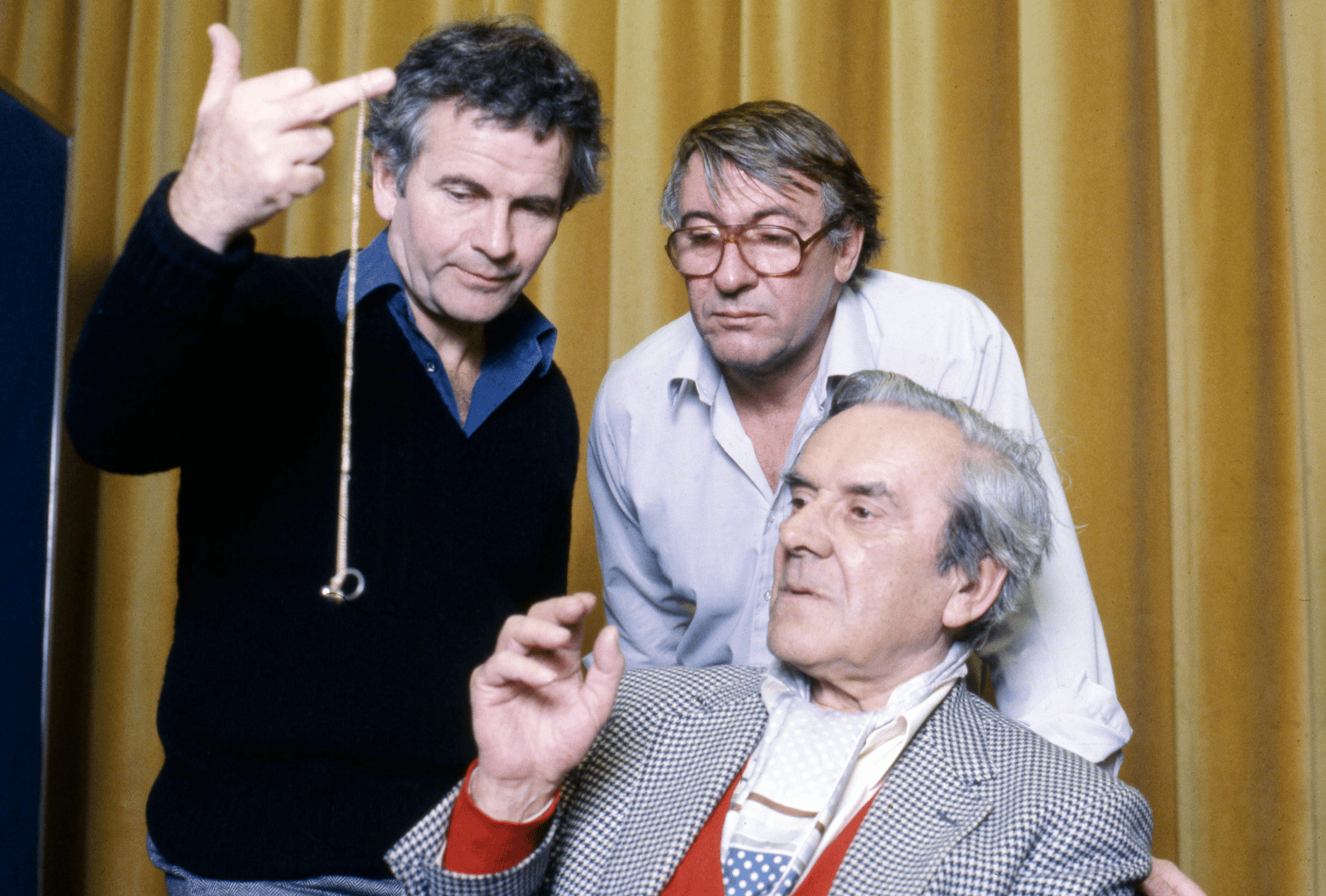 Holm looked back fondly on this experience in his memoir Acting My Life. “This was an ideal project for me – there was a wonderful cast and a real sense of ensemble playing,” he wrote. “The recording provided steady if temporary work which, unlike theatre, did not involve deadening repetition.”

“Michael Hordern played Gandalf in a grand, rather old-fashioned way, and the rest of the cast boasted an exciting collection of talent,” he added. 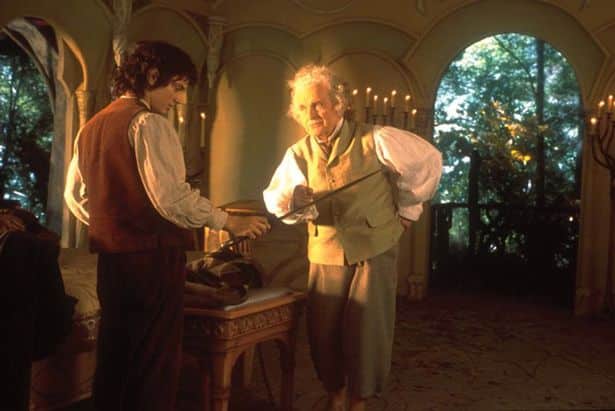 Years later, when Peter Jackson began building his film adaptation of The Lord of the Rings, he borrowed many elements from the 1981 BBC Radio version. Both versions cut many of the same scenes, such as the novel’s moments with Tom Bombadil. They also both used a prologue to unpack the history of the Ring itself. For Bilbo, Peter Jackson cast Ian Holm himself, putting the stage actor into a more world-weary and aged role. He was 70 years old when The Fellowship of the Ring reached cinemas.

One aspect that Holm disliked about the film adaptations was the need for commercialisation, to recuperate some of the movie’s massive budget. “Part of me shuddered at the prospect of being translated into twelve inches or so of rubberized doll, no doubt not looking much like myself – though still similar enough to cause disquiet,” he later wrote. 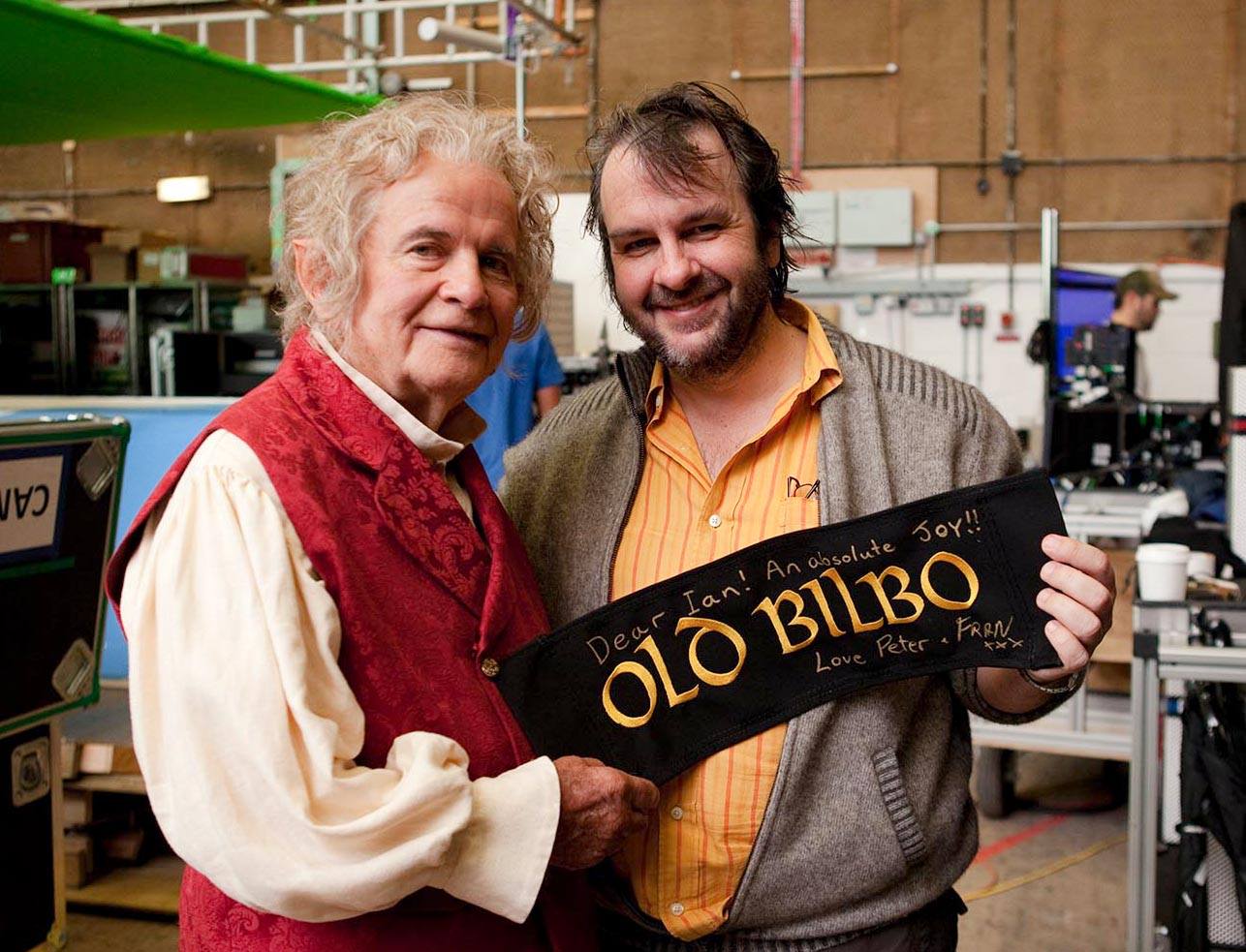 In 2003, Holm starred in The Return of the King, and he later featured as the older Bilbo in The Hobbit: An Unexpected Journey (2012) and The Battle of the Five Armies (2014). A Tony Award, BAFTA and Olivier winner, Holm died in London on June 19, 2020, at the age of 88. In a Facebook tribute, Peter Jackson recalled with warmth how Holm behaved on the set of their first movie together. This director was more than willing to let Holm, a veteran of these stories, lead the way.

“I was nervous about working with such an esteemed actor, but he immediately put me at ease,” Jackson wrote. “Standing in Bag End on the first day, before cameras started rolling, he took me to one side and said that he would be trying different things in every take, but I shouldn’t be alarmed. If, after five or six takes, he hadn’t given me what I needed, then by all means I should give him specific direction. And that’s exactly what we did,” he added. “But incredibly his varied line reads and performances were all quite wonderful. He rarely needed direction.”