1999’s Notting Hill is fondly remembered as one of the sweetest romantic comedies of the 90s, but things were a lot less lovey-dovey between stars Julia Roberts and Hugh Grant when the cameras weren’t rolling.

Although the film casts them as a Hollywood movie star and a London bookseller who meet and fall in love, in reality Grant and Roberts failed to hit it off. The English actor has made some rather unflattering remarks about his esteemed American co-star, particularly in regards to their kissing scenes, and he has suggested he’d only do a Notting Hill sequel if it saw the couple suffering through a nasty divorce. 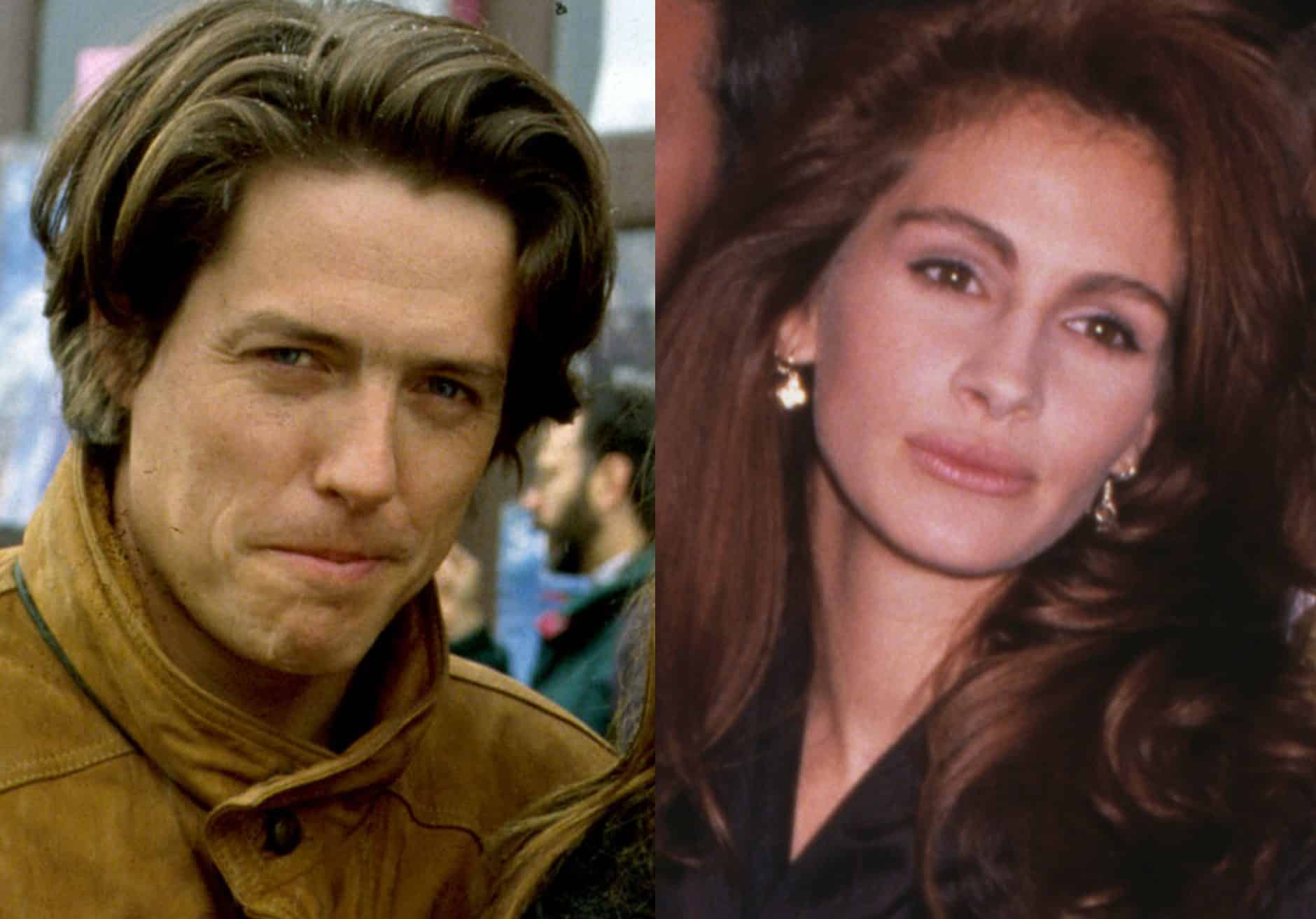 Two years before Hugh Grant shot to stardom with his winning lead performance in Four Weddings and a Funeral, he was one among many British actors to audition for the male lead in a historical romantic comedy called Shakespeare in Love, then set to star Julia Roberts, who had not long since become the world’s most famous actress with 1990 blockbuster Pretty Woman.

Grant recalls that he was “a very, very unemployed, pathetic actor at the time. I remember being so intimidated by the fact that [Roberts] was in the room that I got myself in a sort of kerfuffle, and missed the chair when I sat down.” Not only did Grant fail to land the role, but the whole project fell apart when first-choice leading man Daniel Day-Lewis dropped out. (Shakespeare in Love would ultimately be made in 1998, landing Oscars for Best Picture and Best Actress for Gwyneth Paltrow.)

After Four Weddings and a Funeral proved a worldwide smash and made Grant a star, screenwriter Richard Curtis came up with an intriguing premise for another rom-com: what if love blossomed between an average, everyday man and the most famous actress in the world? Being the biggest female movie star around at the time, Julia Roberts was the obvious choice to play Anna Scott. 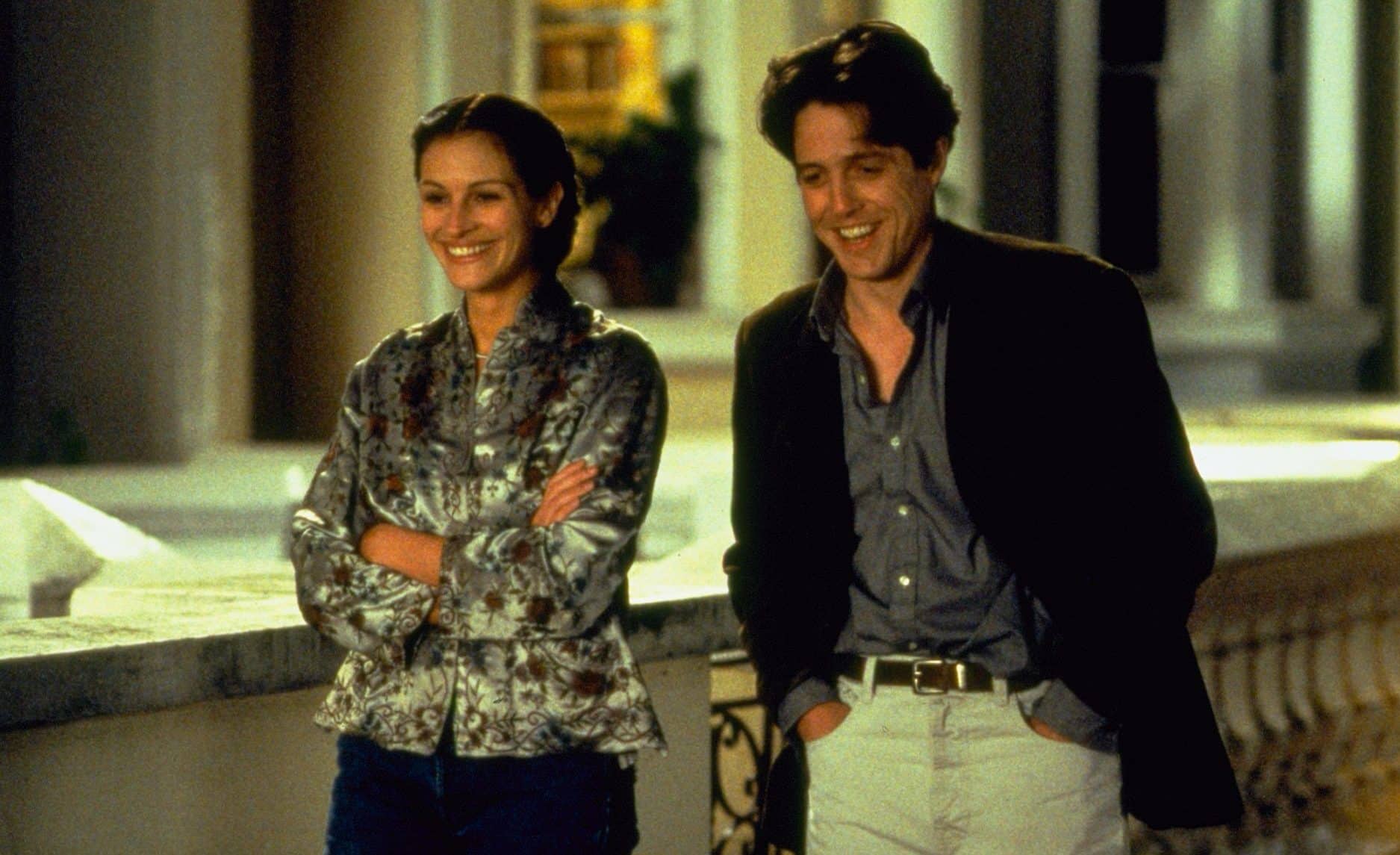 Although Roberts was the most bankable leading lady of the era, she did have a bit of history when it came to on-set clashes. When asked about this by Vanity Fair in 1999, Roberts was diplomatic. “Certainly there have been plenty of people, in the course of making 20 movies, that I didn’t get along with. But I have gotten along swimmingly with 95 percent of the people I’ve worked with.”

Most notoriously, she was reported to have been at loggerheads with director Steven Spielberg when she starred in his 1991 film Hook. Cast as the fairy Tinkerbell, the actress wound up being nicknamed ‘TinkerHell’ due to how hard she was to work with. While Spielberg acknowledged that Roberts was going through “an unfortunate time” (her relationship with Kiefer Sutherland had recently fallen apart), the director flatly declared that he would never work with her again.

Roberts had also clashed with Nick Nolte when they made 1994’s I Love Trouble. Nolte declared that the actress was “not a nice person,” whilst Roberts said that although her co-star could sometimes be “charming and nice, he’s also completely disgusting.” Roberts is also said to have had a bad relationship with Steel Magnolias director Herbert Ross, and it’s been reported in the years since that she butted heads with Meryl Streep. 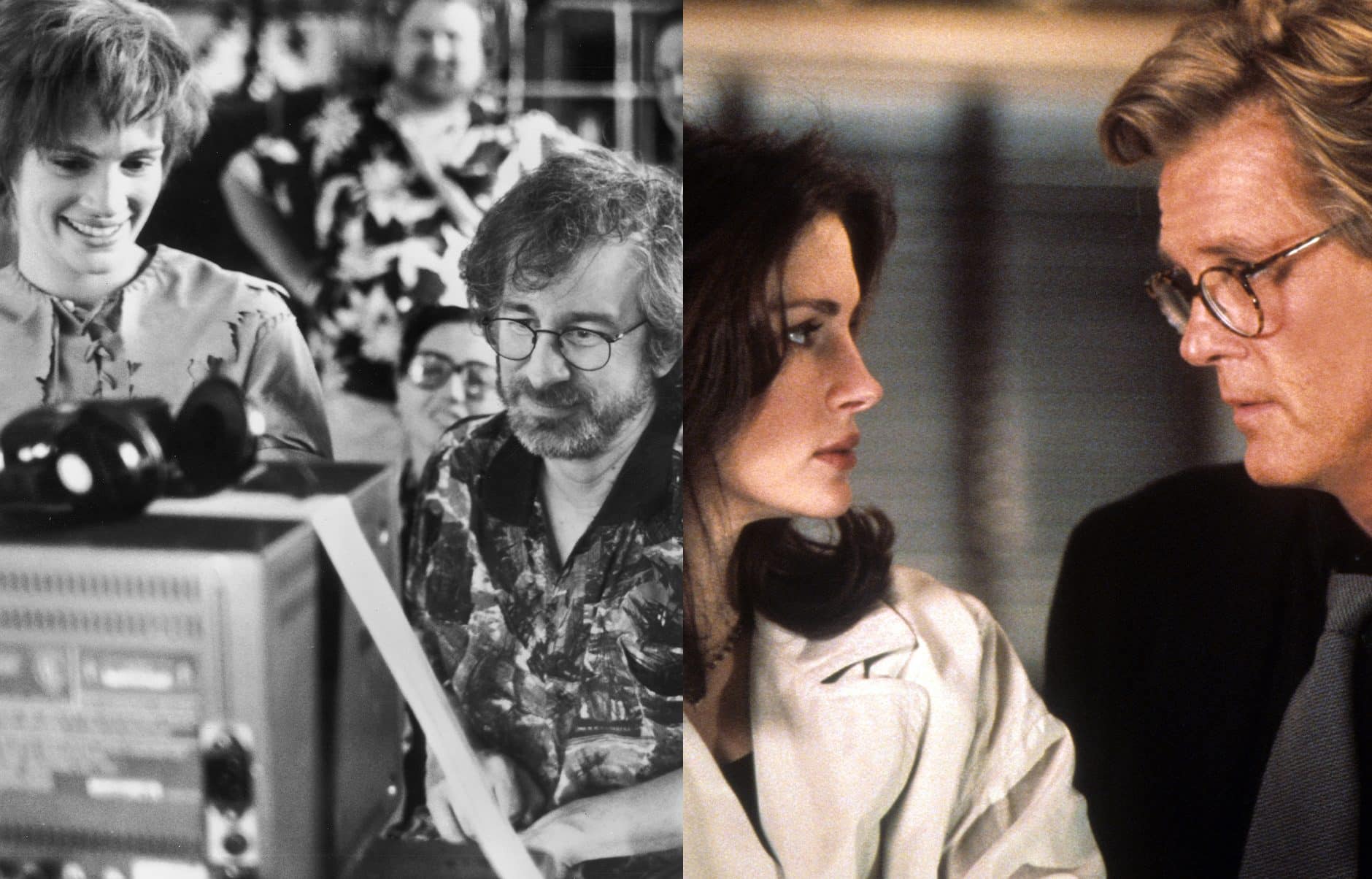 Grant has also admitted to experiencing tension with some of his co-stars. His Four Weddings and a Funeral co-star Andie MacDowell has said he was “cranky” on set, and Grant himself says that his Nine Months co-star Julianne Moore “loathes me” and his About a Boy co-star Rachel Weisz “despises me.”

Grant also later feuded with Drew Barrymore on 2007’s Music and Lyrics: “Drew, I think did hate me a bit… we were just very different human beings. She was very LA, and I was a grumpy old Londoner.”

Nor is it only his leading ladies Grant has had problems with; he’s also admitted that he and Robert Downey Jr. got along terribly on 1995’s Restoration. Grant has claimed Downey “wanted to kill me,” while the American actor called Grant “a jerk… self-important, kind of like, boring flash-in-the-pan a*****e Brit.” Grant has since patched things up with both Barrymore and Downey. 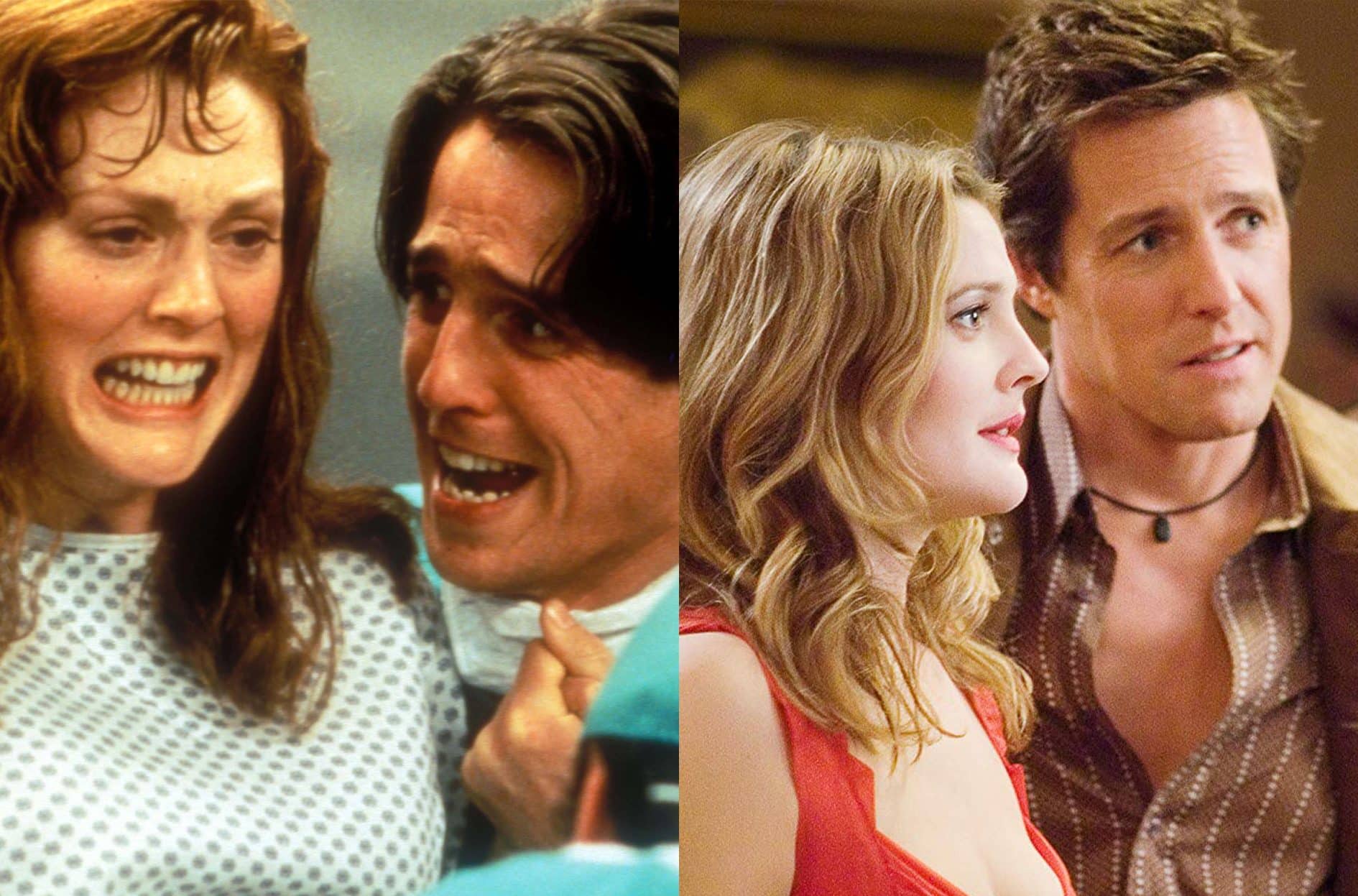 Things didn’t get off to the greatest start on Notting Hill, either. Roberts, who came to the role off the back of a series of flops and a flurry of bad press, was not taken with the film’s concept. When pitched it by her agent, Roberts admits her first reaction was, “How boring, how tedious—what a stupid thing for me to do.” Eventually she accepted the role regardless, in part to get away from America: “since everyone will think it’s about me, I’ll just take a little European vacation and be me for three months.”

Grant had also had a difficult few years; many of his post-Four Weddings movies flopped, his relationship with Elizabeth Hurley made him a tabloid mainstay, and he made headlines in the worst way in 1995 after being caught in his car with a prostitute.

Even so many years after his humiliating Shakespeare in Love audition, Grant admitted his primary feeling toward Roberts was “fear… I think the emotion you have when you first meet someone tends to linger with you. I was all ready to be scared, and I must say, the fear never quite left me.” 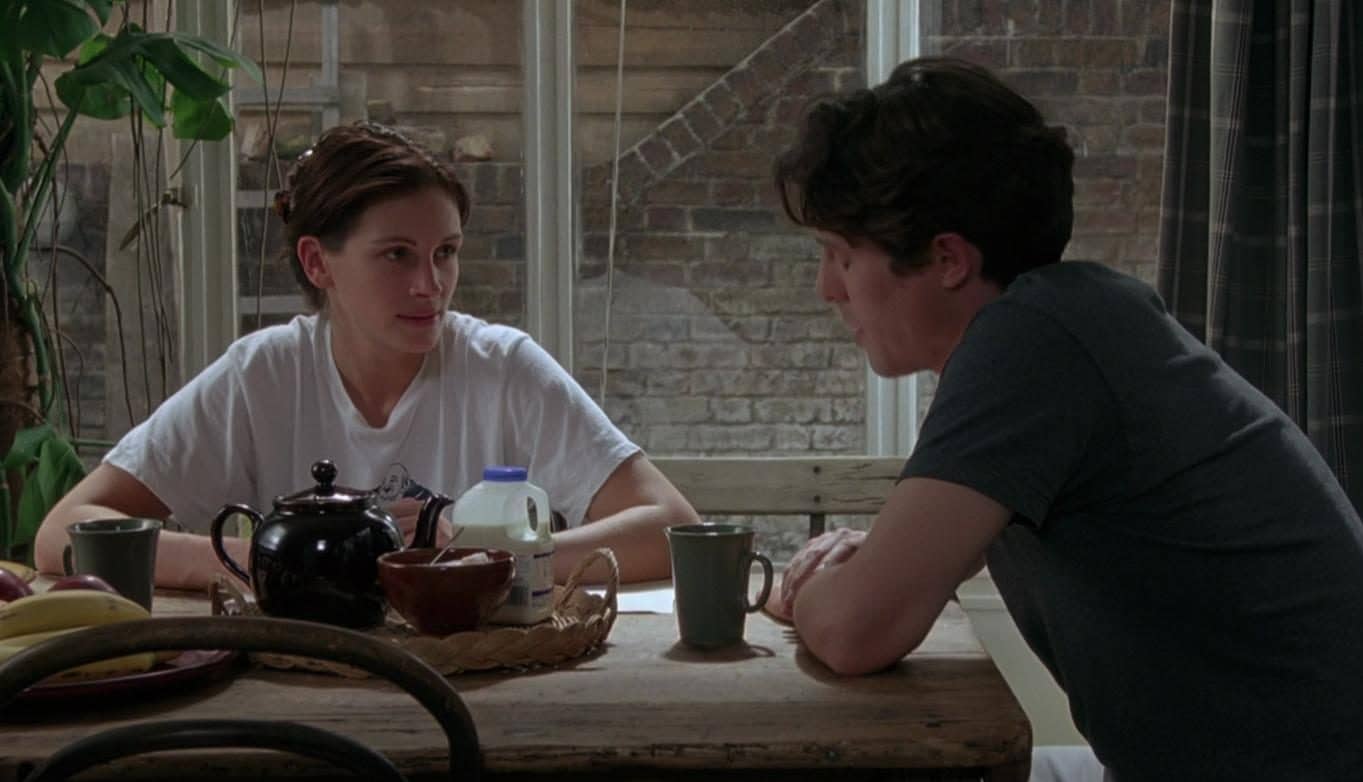 Grant reportedly made a complaint early on (perhaps in jest) that Roberts’ voice was considerably deeper than his own – which, according to Richard Curtis, was because “When [Grant]’s nervous, his voice goes up an octave.” Roberts herself insisted that she too felt “intimidated” working with Grant, as well as feeling like an outsider as the only American on the British production (a cameo from Alec Baldwin notwithstanding).

Roberts had issues with the script throughout production. She took particular umbrage with the Rita Hayworth quote, ‘They go to bed with Gilda, they wake up with me;’ “I hate to say anything negative about what Richard wrote, because he’s a genius, but I hated saying that line. To me, it was nails on a chalkboard. I don’t really believe any of that.”

Media interest in both actors sometimes caused issues whilst filming on location in London: the actor reflects, “It was surreal. We were shooting scenes in Notting Hill, where we had a hundred extras playing paparazzi, and then we had a hundred [real] paparazzi paparazzi-ing the paparazzi.” 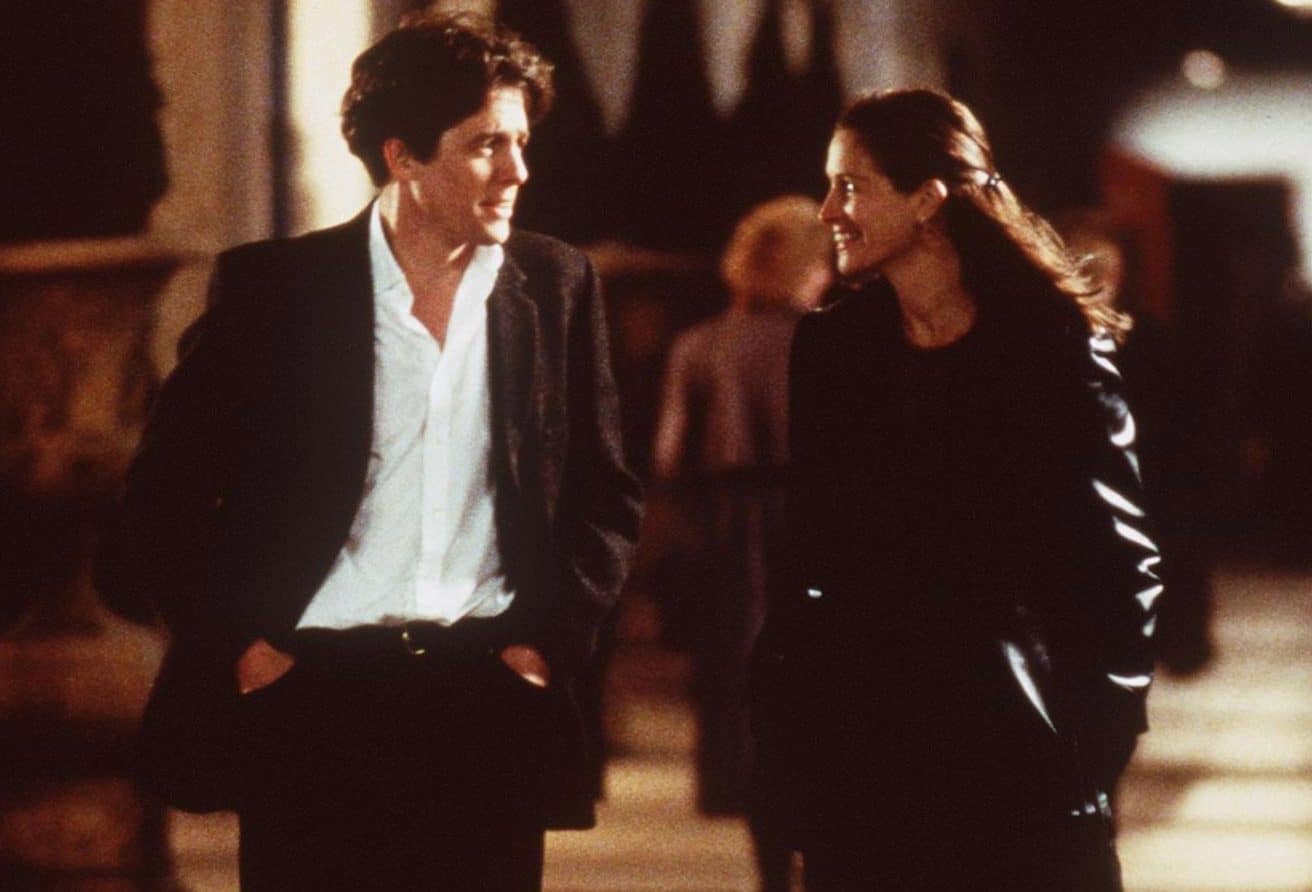 When Notting Hill was released, things appeared rosy enough between the actors. It wasn’t until five years later, when Hugh Grant was asked about working with Roberts by Oprah Winfrey, that he indicated they hadn’t been the best of friends. Asked to describe Roberts in a single word, Grant responded, “nasty,” before immediately correcting himself.

He remarked that Roberts was “very big-mouthed… physically, she has a very big mouth,” then joking, “when I was kissing her, I was aware of a very faint echo.” When Winfrey called Roberts one of the nicest people she’d met, Grant demurred, “I wouldn’t go that far.”

Reminded of these remarks in 2014, Roberts didn’t seem to take Grant too seriously, and said she’d happily work with him a second time. “I had a blast on Notting Hill. Even though he is cruel about my looks, he is a great talent, so it would be fun [to work with him again]. He’s forgiven now.” 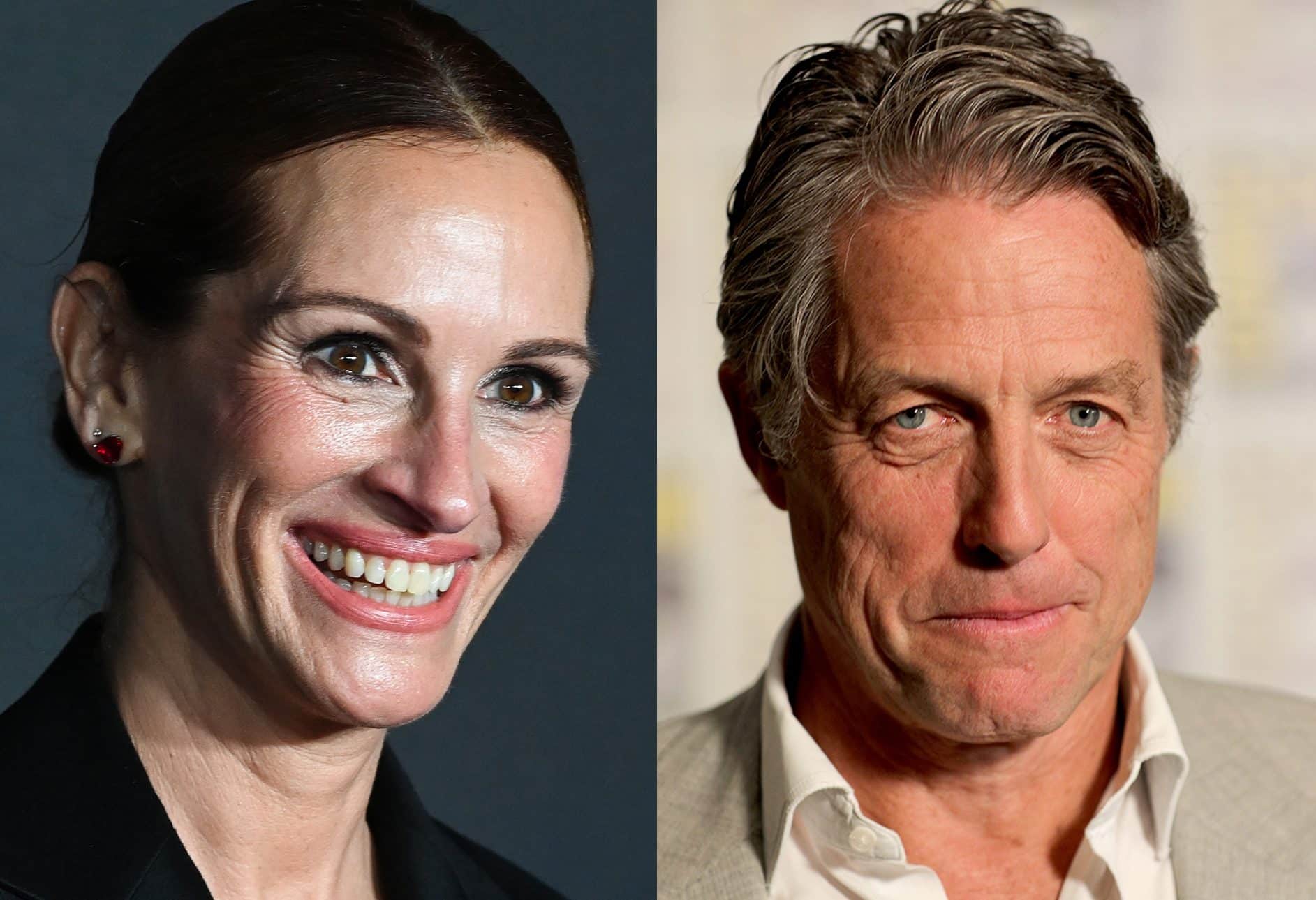 To date, Roberts and Grant have never made another film together. Both stars have faded back from the limelight somewhat over the years, but while Roberts is still happy to make rom-coms (such as 2022’s Ticket to Paradise opposite George Clooney), Grant has declared he’s now “too old, ugly and fat” to make such films.

Still, Grant does have a curious pitch for a Notting Hill sequel: “I would like to do a sequel to one of my own romantic comedies that shows what happened after those films ended, to really prove the terrible lie that they all were, that it was a happy ending…

“I’d like to do me and Julia and the hideous divorce that’s ensued, with really expensive lawyers and children involved in tug of love, floods of tears, psychologically scarred forever. I’d love to do that film.”