How To Clean Your My Little Ponies

Collecting My Little Ponies can be a delightfully nostalgic hobby, thanks to the wealth of adorable characters, quaint tiny toys and accessories, and hundreds of limited edition Ponies across the various generations. Many Ponies can also often be purchased for only a few dollars, making even the vintage toys fairly accessible. With that said, maybe the most satisfying part of Pony collecting is getting to clean them up.

Cleaning a My Little Pony can be an involved process, but it can also be hugely relaxing and rewarding. From beginning to end, you can take a Pony from grimy to glamorous literally overnight, and we’re walking (or cantering) you through every single step. 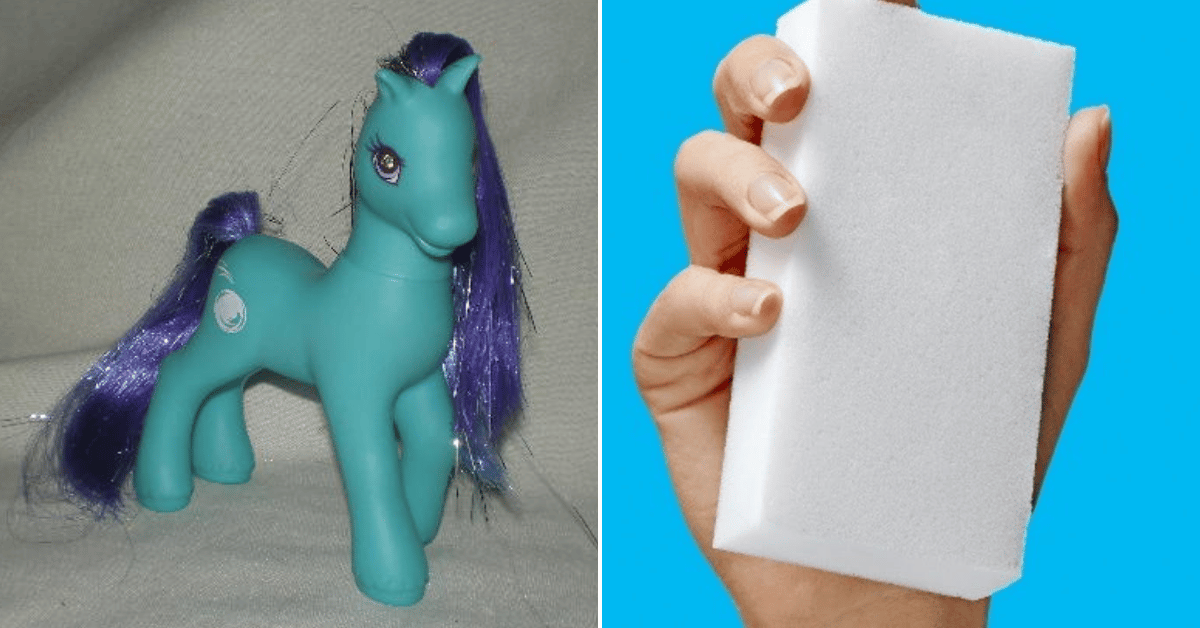 Chances are the Ponies you end up with are going to look a little bit worse for wear. The first step in taking them from grimy to galloping is to remove any stubborn marks that they may have accumulated over time: usually, biro, paint or nail varnish. The best way to remove such marks is with a Magic Eraser, which has a nitrogen-rich organic base known as melamine.

Melamine is an abrasive, so it wears down marks with the power of friction, which is often more effective than trying to dissolve the nail varnish or paint compounds with soap and water. Be careful not to scrub too hard on the eyes or cutie marks though, as this can wear away the paint and leave you with a featureless Pony. 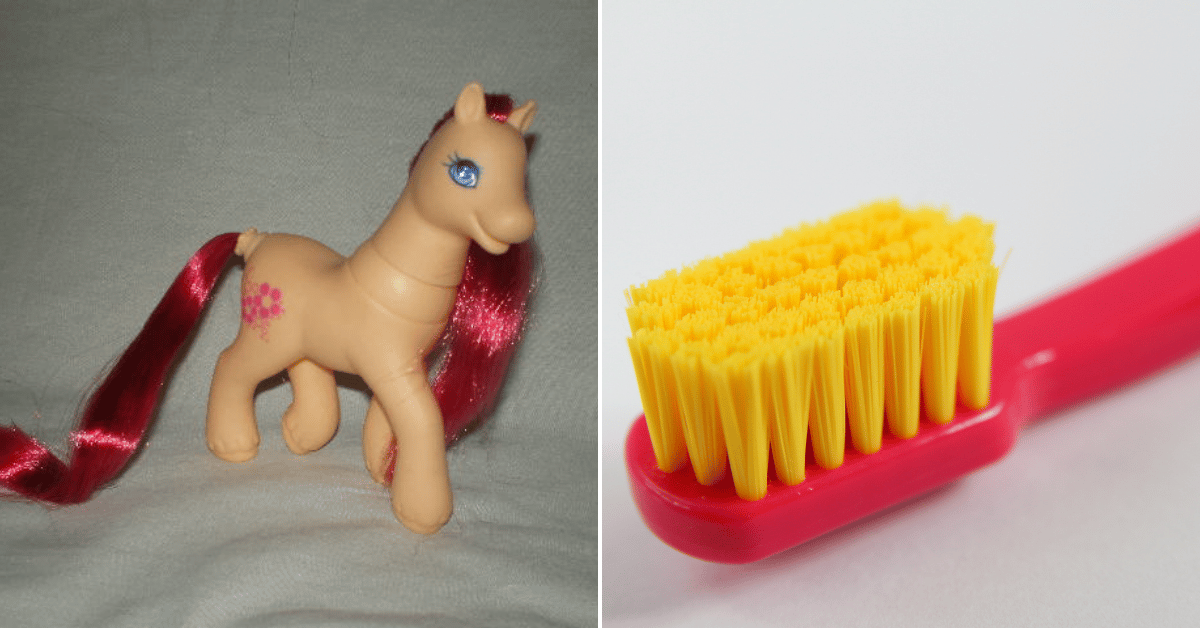 If the Pony you’re trying to clean up is only moderately grubby and free of marks, then the next step is to clean the body with soap. Running water can speed up the process, but it’s important to avoid saturating the body, as water can get inside the Pony and cause mould. It’s best to hold the body under a slow stream of lukewarm water, away from the joints, just enough to dampen it all over.

Then apply dish soap or shampoo to a damp toothbrush, and use this to gently scrub the Pony all over. This should lift any accumulated dirt, stickiness or grime, which second-hand Ponies are prone to have after sitting in storage for years. Do this as many times as you need to, quickly rinsing the Pony in between, and pat dry with a hand towel. 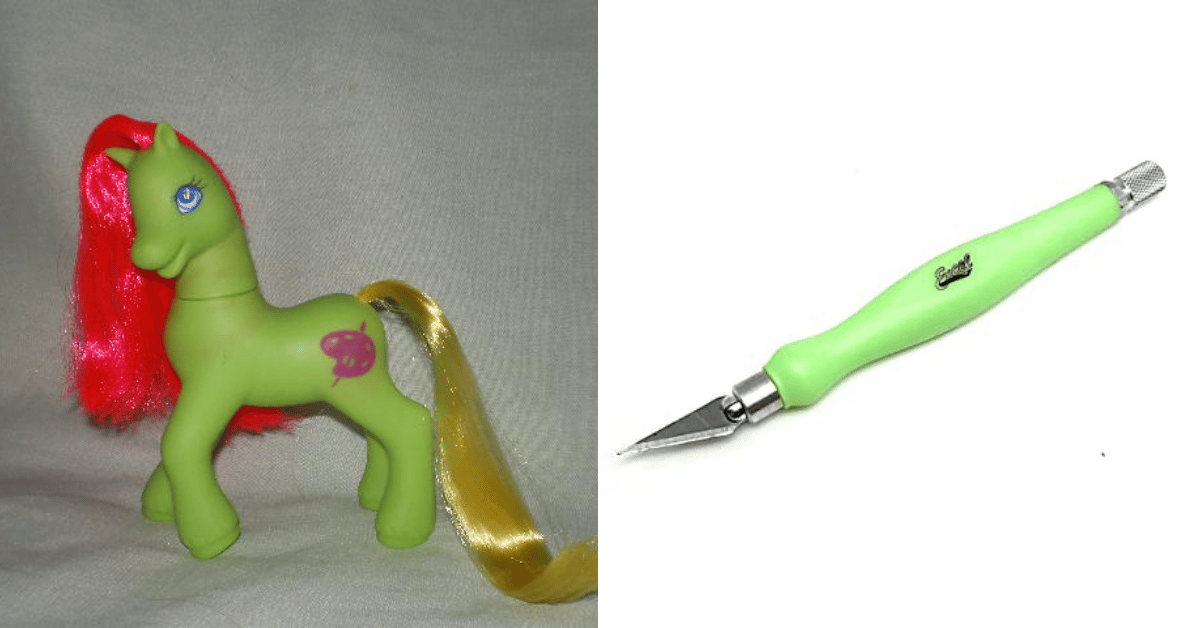 Unless you’re buying from an established collector who makes sure to clean and style their Ponies before selling, it’s basically impossible to find a secondhand Pony that doesn’t need at least a little TLC. The above steps will suffice for an ordinary amount of wear and tear, but there are always some Ponies, usually those found at the bottom of a flea market bargain bin, that will need more intensive cleaning.

If that’s necessary, the first step is to find the joint where your Pony’s head meets its body, and slip a craft knife into the spots where the glue holds it together. Cut the glue, being careful not to slice into the neck or body, and the two pieces should come apart completely. The next step is to reach into the body with a pair of plyers and pull out the tail through the neck hole. 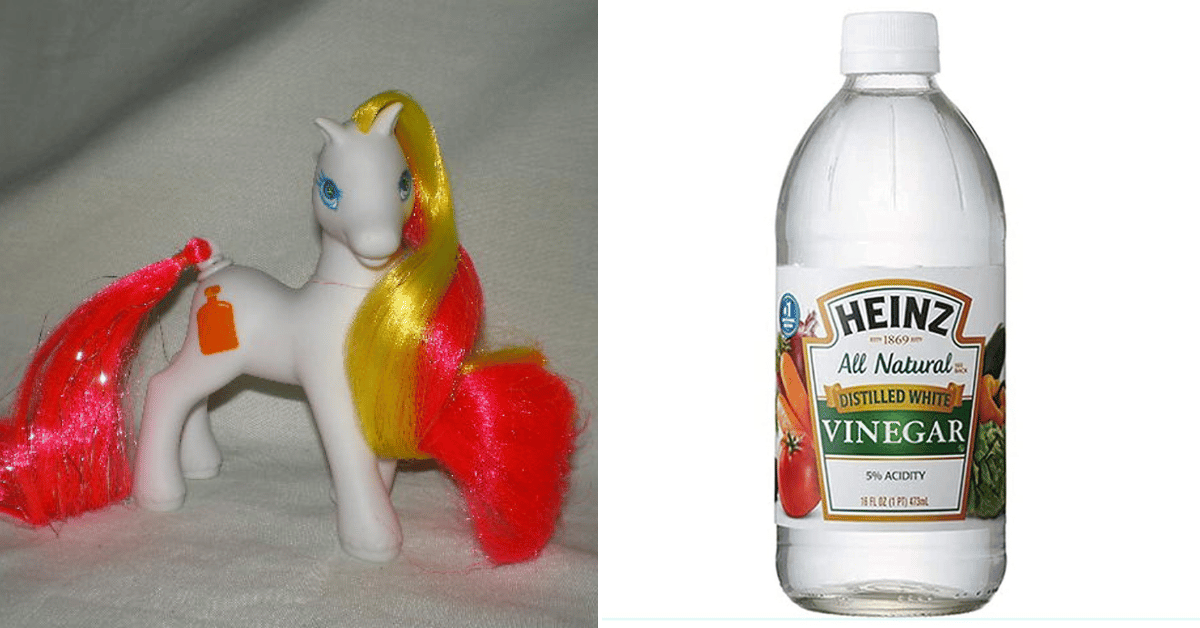 Chances are, when you pull the tail out of the body of the Pony, both the metal clamp and washer holding the tail in place will be covered in rust. Luckily, the fix for rust is easy: simply place both metal pieces into a cup full of white vinegar and leave to sit for around an hour. After 30 minutes, scrubbing the metal with a toothbrush will lift some of the rust, and you can repeat this in 30-minute intervals for as long as you need.

Once you have lifted as much of the rust as you can, rinse the parts with water and dry thoroughly, since the goal is to avoid introducing any more moisture into the body. This is also a good time to wipe the inside of the body with an antibacterial wipe and dry with toilet tissue, as this will get rid of any mould build-up and prevent regrowth. If you can’t reach into the legs, a folded pipe cleaner covered in shampoo will have the same effect; just make sure to rinse and dry the legs. 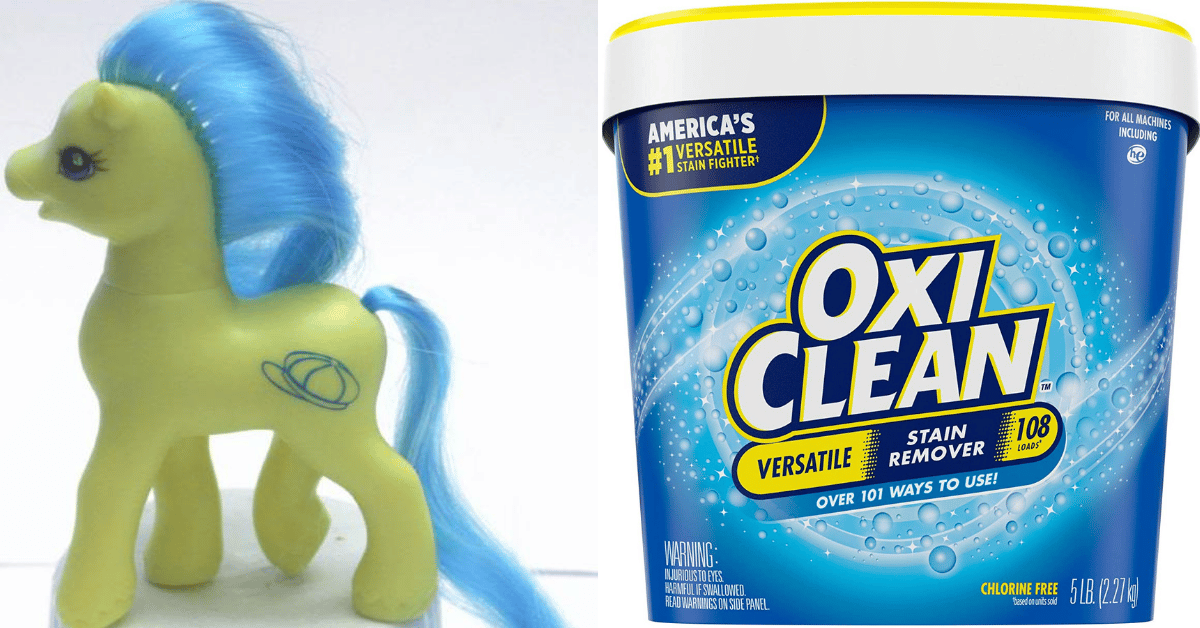 Once all the internal grime is gone, if the outside is just as objectionable, then it’s time to give your Pony a long bath. In the case of just one Pony, fill a Tupperware with warm water and laundry detergent, and scale up as needed based on the size of your herd. Mix to combine, and add the tails, bodies and heads of your Ponys into the solution. Then simply leave overnight.

If once retrieved from their bath, some parts of the Pony or Ponies are still bearing stubborn marks, then repeat steps one and two. A magic eraser and final scrub with dish soap should remove any nail varnish, pen or paint that survived the dip, and you will be left with a totally clean but disassembled Pony, which needs to air dry for 24 hours. The next day, replace the tail and glue the head back into position with superglue. 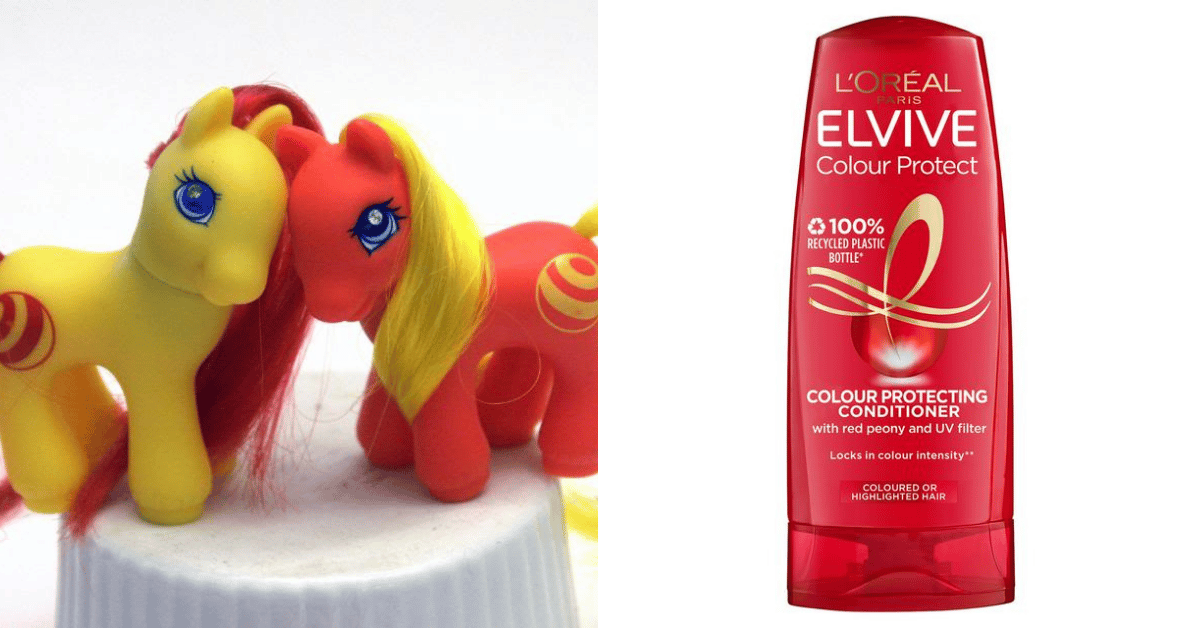 Once you’re happy with your Pony’s body restoration, wet the mane and tail under a slow stream of water, being careful not to saturate the roots of either. Once the mane and tail are wet, you can wash them with shampoo as if it were real hair, rubbing it in with your fingers and then rinsing out.

The shampoo will clean the plastic strands, but will not transform them from straggly and tangled to smooth and easy to style. Again, like real hair, conditioner is needed to tame the Pony’s mane and tail. Simply apply any conditioner to the hair, and leave it to sit for a couple of minutes, before combing through to remove any tangles. Then leave the conditioner for anywhere between an hour and overnight, depending on how damaged the hair is.

Drying the Pony off 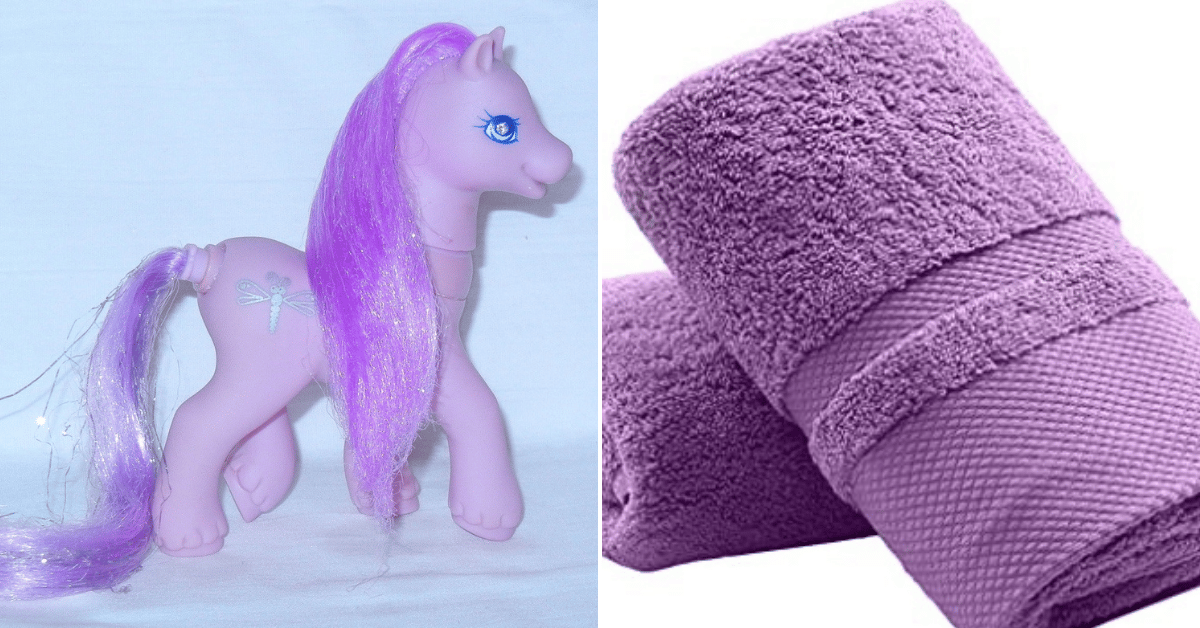 When you’re satisfied with your Pony’s hair, simply rinse out the conditioner under the tap, and gently squeeze the excess moisture out of the hair with a hand towel. You will also need to pat down your Pony to catch any drips. Once your Pony is dry, you will need to re-comb the hair to straighten out any new tangles, and then it’s on to styling!

How you style your Pony’s hair will depend on your dedication to accuracy, and whether or not you plan to resell the Pony on the collector’s market. If you aim to sell your Pony, then you will need to style its mane and tail as close to its out-of-the-box look as possible, whereas you may opt for a style you like more if the Pony will be remaining on your shelf. 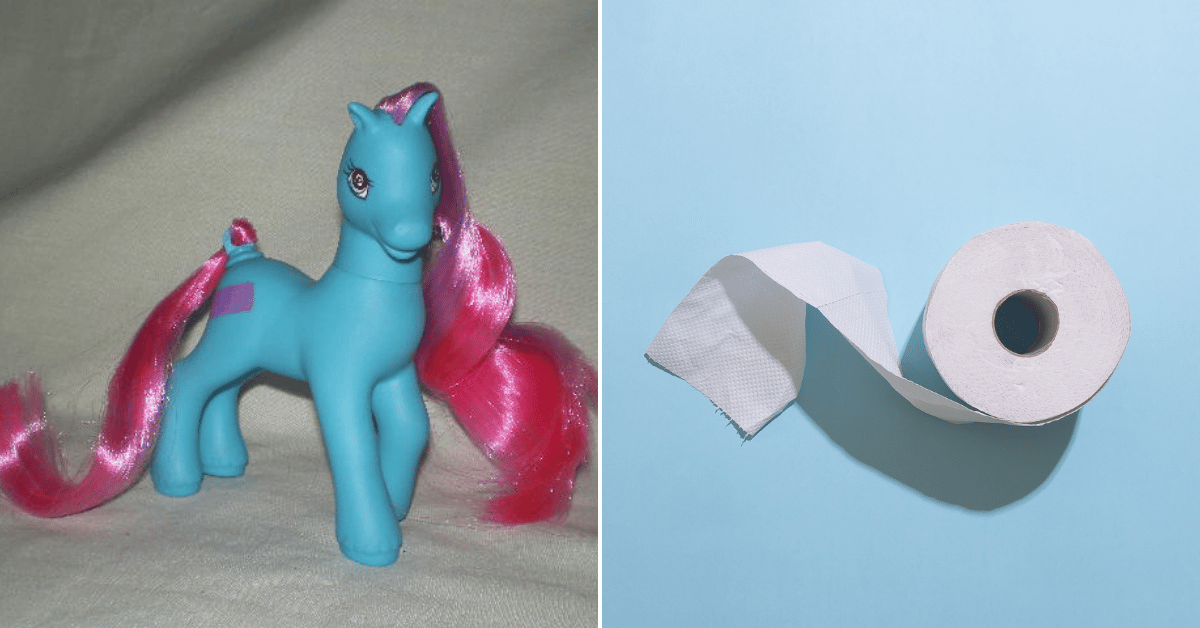 Straight-haired Ponies are the more common of the two types and are also conveniently easier to style. Once your Pony’s hair is damp and tangle-free, wrap the mane around its neck and secure it with a strip of toilet tissue or kitchen roll. Simply wrap the paper around the neck as well, and tie it into a knot to secure it. This can be a little fiddly, so be prepared for several attempts.

Most straight-haired Ponies have a single curl in their tail, which can be achieved using the same method. Tuck the Pony’s tail between its legs, and then wrap the tail around either one of the hind legs, securing it with another strip of kitchen roll. Which leg you choose will determine the direction of the curl. 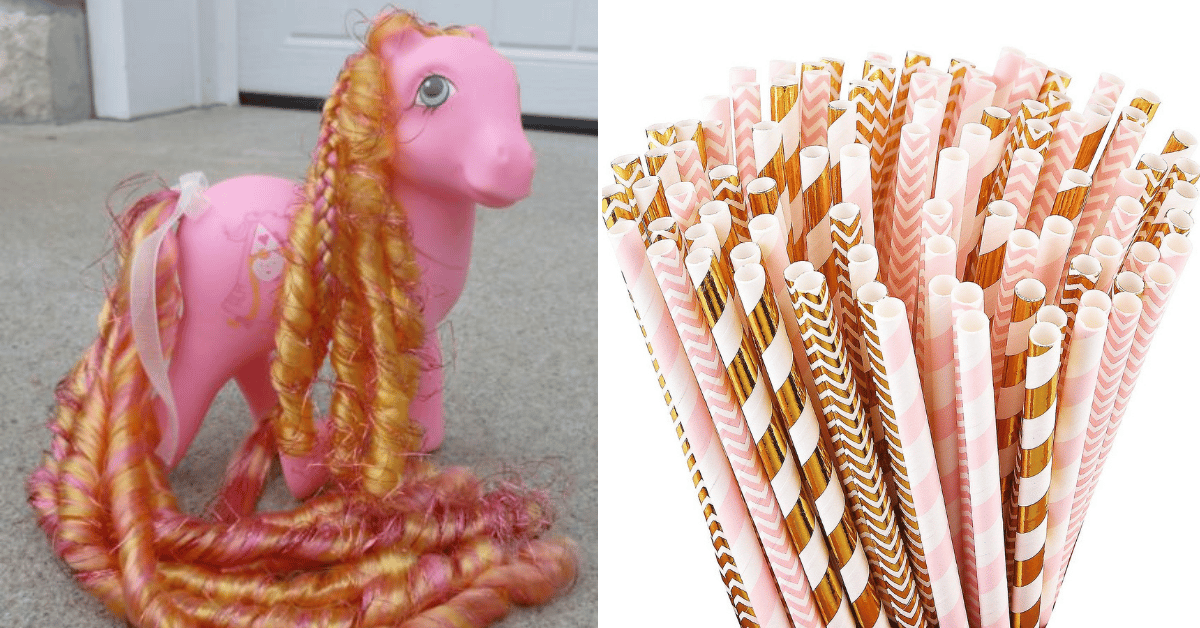 Curly-haired Ponies are the rarer and more high-maintenance kind, but they are a snap to restore once you know how. All you need are straws and bobby pins, and you can bring even the most bedraggled mane back to its out-of-the-box glory. Simply cut the straws into quarters, and use each piece as a roller to secure one chunk of hair. Then secure each piece with a bobby pin. The direction of the roll will determine the direction of the curl.

You can style the tail using the same method, though you will need to cut the strips into halves rather than quarters, to account for the larger amount of hair. Whatever you’re styling, simply leave the Pony to air dry for 24 hours before unwrapping, and you’ll have a perfectly coiffed mane and tail! A quick brush out for the mane is acceptable at this point, but brushing the tail will result in it losing its curls. 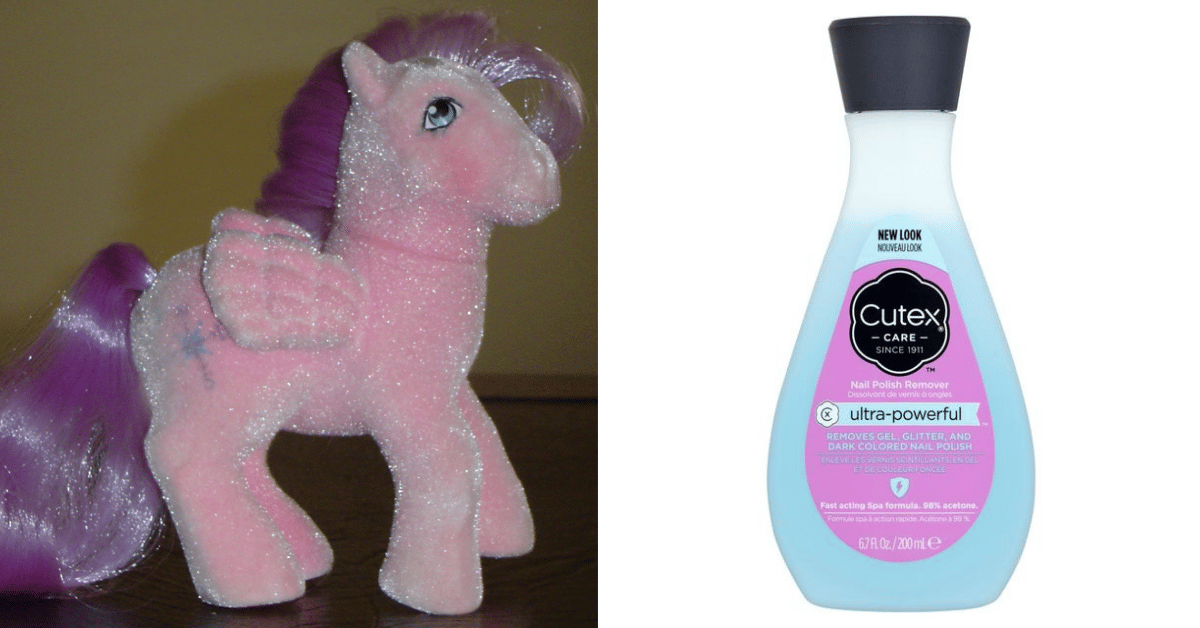 Of all the types of Ponies out there, the hardest ones to clean are the So Soft Ponies, which are covered in a fleecy, suede-like flocking. Due to this, many collectors choose to strip the flocking off their So Soft collection, either because their coating is too far gone to save, because they would like the Pony to match their baby equivalent, or just because they prefer the look of the brighter colour underneath.

The simplest way to remove your Pony’s flocking is to use an acetone-based nail polish remover. Simply soak a cotton pad or ball in the liquid (only pour out a little at a time, as it evaporates quickly), and swipe across the Pony’s body. It is best to use a q-tip soaked in acetone to remove flocking from the nose, mouth and near the hairline, in order to avoid dissolving the glue that holds the mane and tail in place.