How Much Is A Patti The Platypus Beanie Baby Worth In 2022?

When it comes to things that are quintessentially 90s, nothing beats Beanie Babies. First released in 1993, these coveted collectables first had to deal with pretty lukewarm sales, with several shops refusing to stock them at all, and customers disliking their floppy and understuffed bodies for seeming cheap and unappealing.

Of course, by the late 90s, Beanie Babies had gone from much-maligned to obsessively traded and collected, before falling out of favour again in the early 2000s. However, trends are always circular, and an increased sense of 90s nostalgia plus economic laws of scarcity and value accumulation that comes with age means that some Beanie Babies are now selling for immense amounts of money.

One of these highly coveted Beanie Babies is Patti the Platypus, which was one of nine toys released as part of the company’s original run. eBay sellers regularly list Patti the Platypus for between $1,000 and $7,500 but collectors put its real value in 2022 between $30 and $200, depending on print errors, physical characteristics and wear and tear.

So what determines how much your Patti the Platypus is worth, and why are some Patti’s selling for such huge prices? We’re getting to the bottom of the hype around this purple treasure, from its humble origins to its various iterations and true resale value. 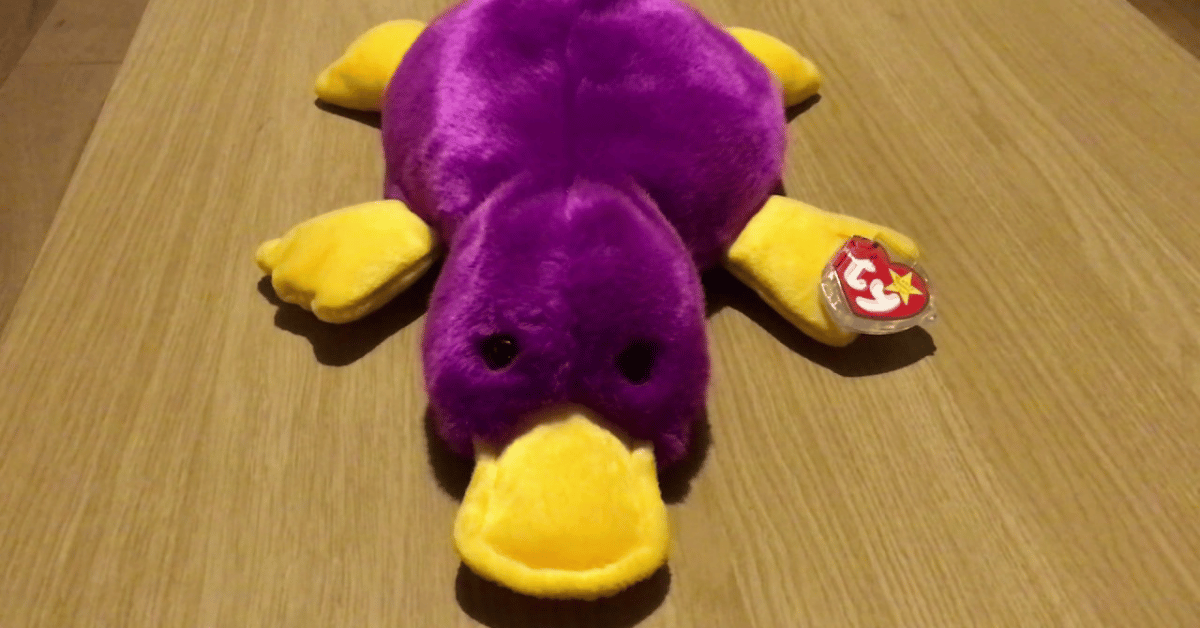 Patti the Platypus was designed in 1993, and was one of the original nine Beanie Babies released, hitting the shelves alongside Legs the Frog, Squealer the Pig, Spot the Dog, Flash the Dolphin, Splash the Whale, Chocolate the Moose and Brownie/Cubby the Bear. The signature flat and floppy design of all the Beanie Babies especially lent itself to Patti, given that unlike a moose or a bear, a platypus would quite naturally lay flat on its belly.

Patti’s original design was retired five years after its release in 1998, meaning she was on the shelves for a fairly long time when compared to other Beanie Babies of the era. However, in that time Patti also went through three separate recolours, resulting in a total of four Pattis now floating around the resale market. Given that they were released in sequence, the easiest way to tell the value of your Patti is to figure out which colour you own. 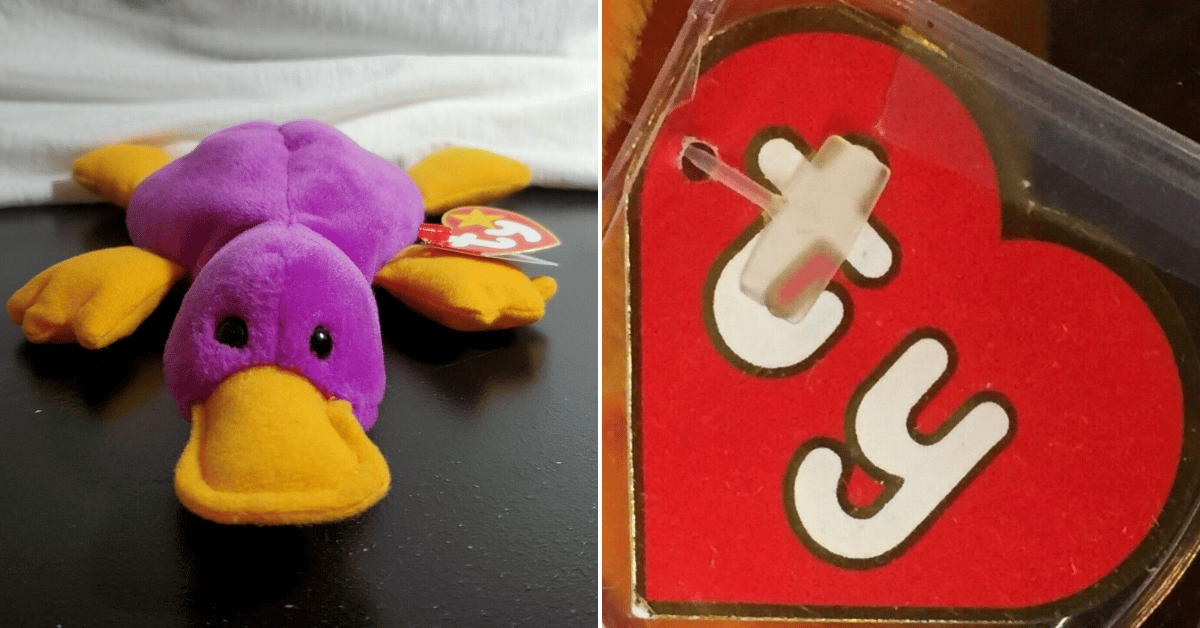 Deep Fuchsia Patti the Platypus is the rarest of all four colours, given that it was only available to purchase for a limited time in 1993. Deep Fuchsia was the colour of the original Patti, and was showcased at a toy fair in 1993, where interested buyers could put their names down and order her ahead of her January 1994 release.

However, by the time that official release date rolled around, Patti had already had her first redesign, so the only way anyone could purchase the original deep purple Patti was if they ordered it at the fair. As a result, first edition Deep Fuchsia Pattis with a generation one tag ear and tush tag are hugely desirable amongst collectors and can fetch prices of up to $230. 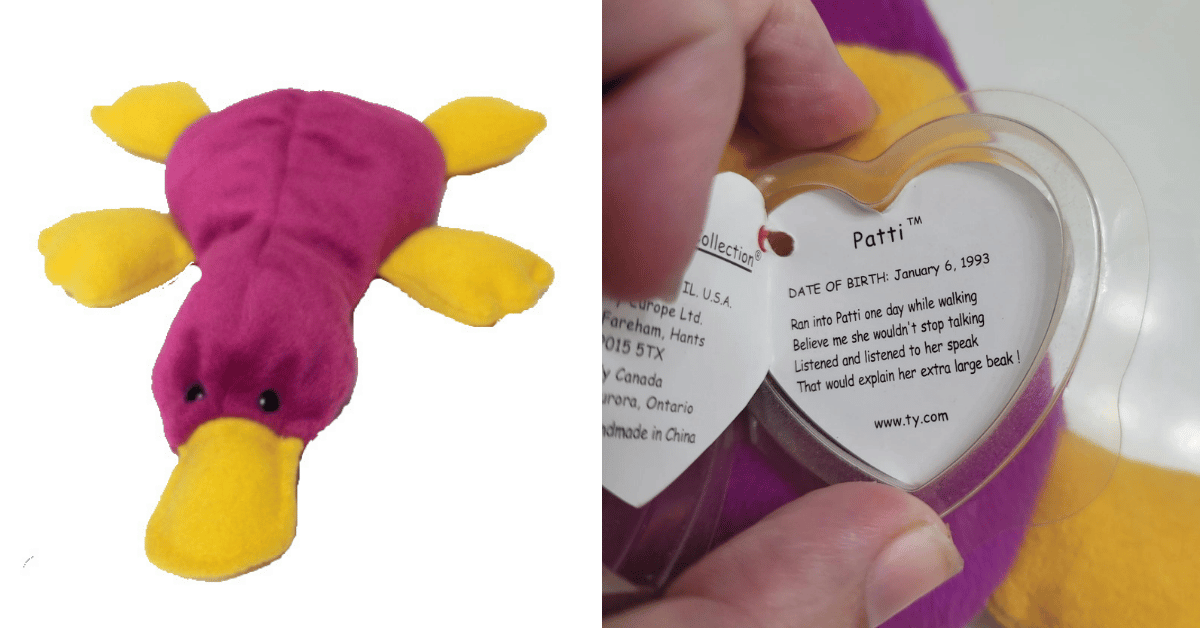 Raspberry Patti debuted in January of 1994, and was retired within the same month (the reason for this is unknown, though it’s likely due to the designers simply settling on their preferred hue of fuchsia). As a result, this is another recolour that can be hard to find on the resale market, and so is pretty coveted by collectors and those seeking to turn a profit. When it comes to figuring out if you’re lucky enough to own a Raspberry Patti, it is best to look for a warmer, pinker fur colour, and to check for both a generation one tush tag and a generation two swing tag in combination.

As for value, Raspberry Pattis don’t pop up on eBay or Amazon very often, which can make it difficult to get a concrete valuation. When they are listed, it can be for anything between $30 and $27,000, depending on the condition of the Beanie Baby, whether it has its tags intact, and whether it was made in China or Indonesia. As a rule, the latter is more valuable, for reasons we’ll explore below. 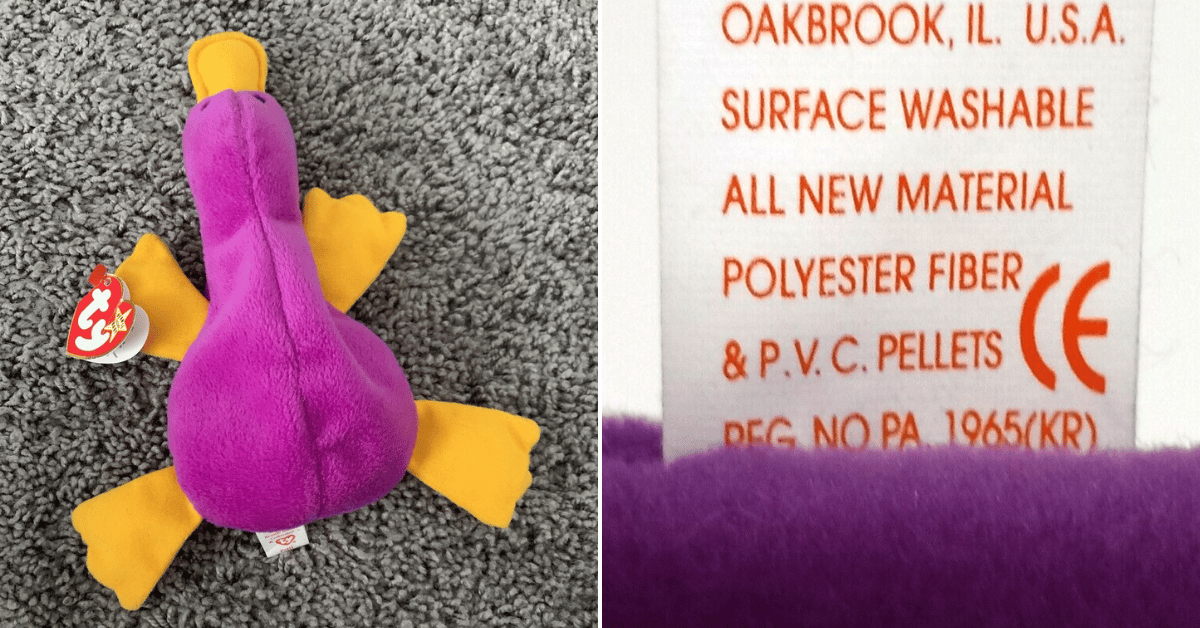 Fuchsia Patti the Platypus is the version of the toy that stuck around the longest. First released in 1993 alongside the original Deep Fuchsia colourway, this iteration can be recognised by its cool-toned fur that is closer to indigo than pink, and a hue that is visibly lighter when compared to the toy fair Deep Fuchsia Patti. This Patti was not retired until 1998, making it the most common of all the Patti iterations, but that doesn’t necessarily make it the least valuable.

The value of a Fuchsia Patti is best determined by its tags, as it can carry anything from a generation one to six tush tag and a generation three to five swing tag. As a result of being around for so long, this Patti was produced in China, Korea and Indonesia. This means that some versions have rare and discontinued P.V.C pellet stuffing, which is of particular interest to collectors. The Fuchsia Patti resale value begins at $20 and goes all the way up to $2000, but on average tends to sell for around $400, with tags and P.V.C pellets. 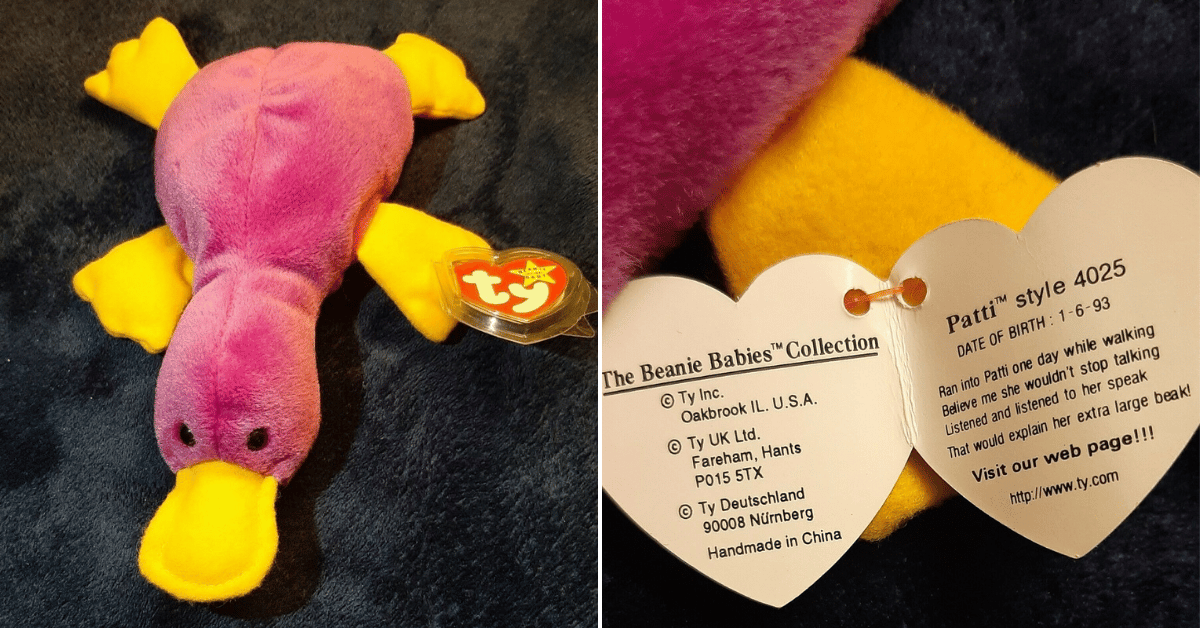 The Magenta Patti is easily identifiable as it is the most warm-toned of all the platypi, with a fur colour that is somewhere between pink and maroon. Given that it was only available to purchase in 1995, it always comes with a generation three swing tag and a generation one tush tag, which is another easy way to narrow down which Patti iteration you actually own.

The 1995 Magenta Patti is one of the rarer versions given that it was only around for a year, and there is another element that makes it especially valuable on the resale market. Some Magenta Pattis have what is known among collectors as an “Italics “German” tag”, a tag that was obviously never attached to US Beanie Babies and has a German copyright notice. With this tag, a Magenta Patti’s value can jump from around $25 to $350, though they are occasionally listed on eBay for as much as $7500.