How Much Are Vintage Polly Pocket Toys Worth Today?

Just like Barbie, Polly Pocket was first created by a parent to entertain a bored daughter. Chris Wiggs, a British dad, built an adorable miniature home and doll for his three-year-old daughter Kate. His prototype Polly, dating to 1983, resided in a simple powder compact. He took his idea to Bluebird Toys, and the new products flew off the shelves from 1989. Mattel, the manufacturer of Barbie and, later, Bratz Dolls, eventually bought Polly Pocket in 1998.

These micro-dolls and homes, often stocked with accessories and hidden compartments, can make a small fortune at auction today. Particularly treasured are the Polly Pocket sets that date back to the Bluebird Toys era. Take a look below to find the most valuable examples. 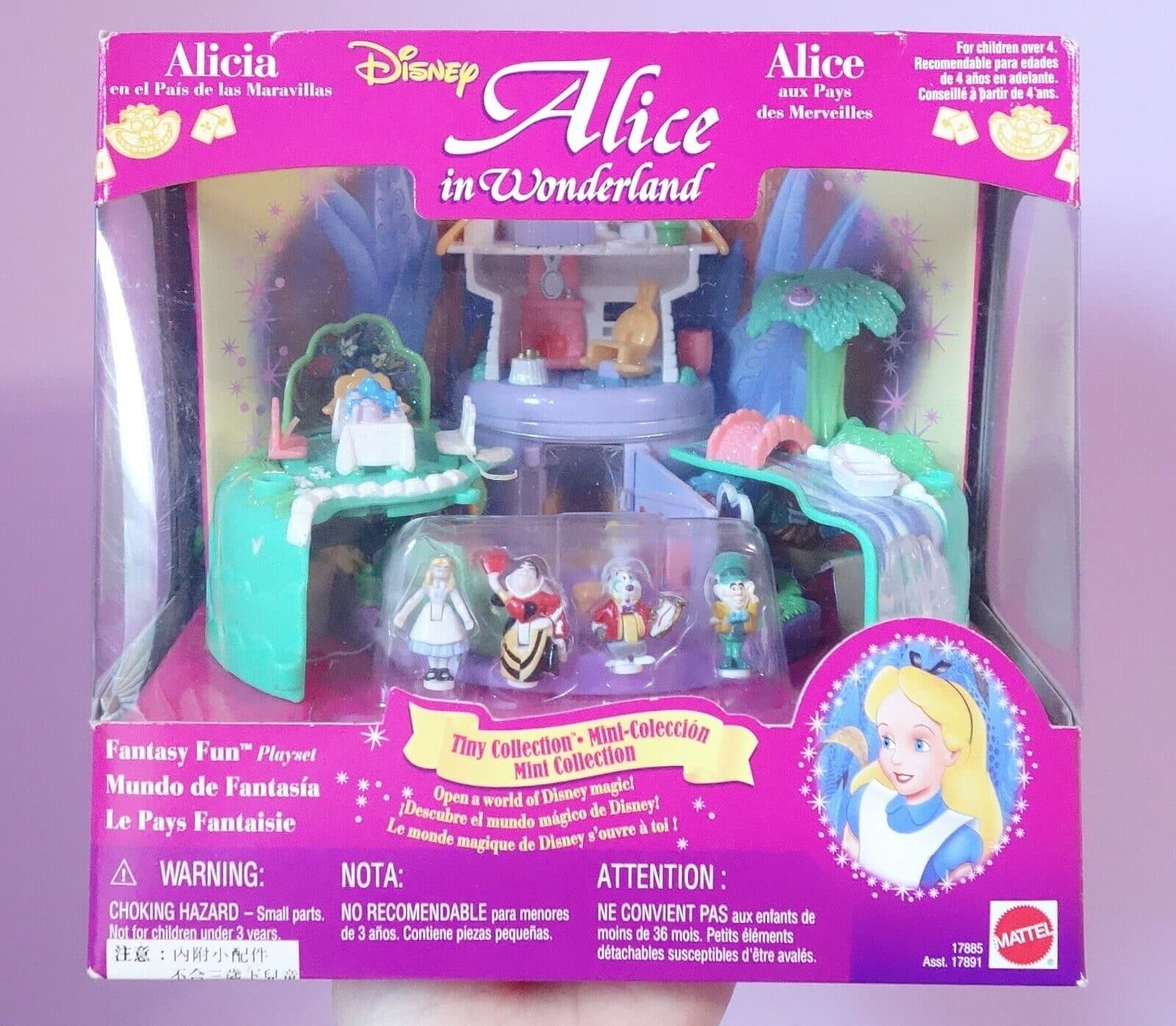 Lewis Carroll’s novel Alice’s Adventures in Wonderland was published in 1865. This fantasy tale was Walt Disney’s favourite story, and it became an animated Disney movie in 1951. A flop when first released, Alice in Wonderland became more popular throughout the 70s and 80s through regular TV showings, and by 1998, Mattel decided to include it in the Polly Pocket range.

An unopened, intact Alice in Wonderland Polly Pocket sold for an impressive $1,006 in August 2022. The seller was based in Auburn, Washington. Tinkerbell, Ariel and Cinderella all received the Polly Pocket treatment over the years, and one CGI artist has even recreated Polly Pocket sets as the homes of Disney’s villains. 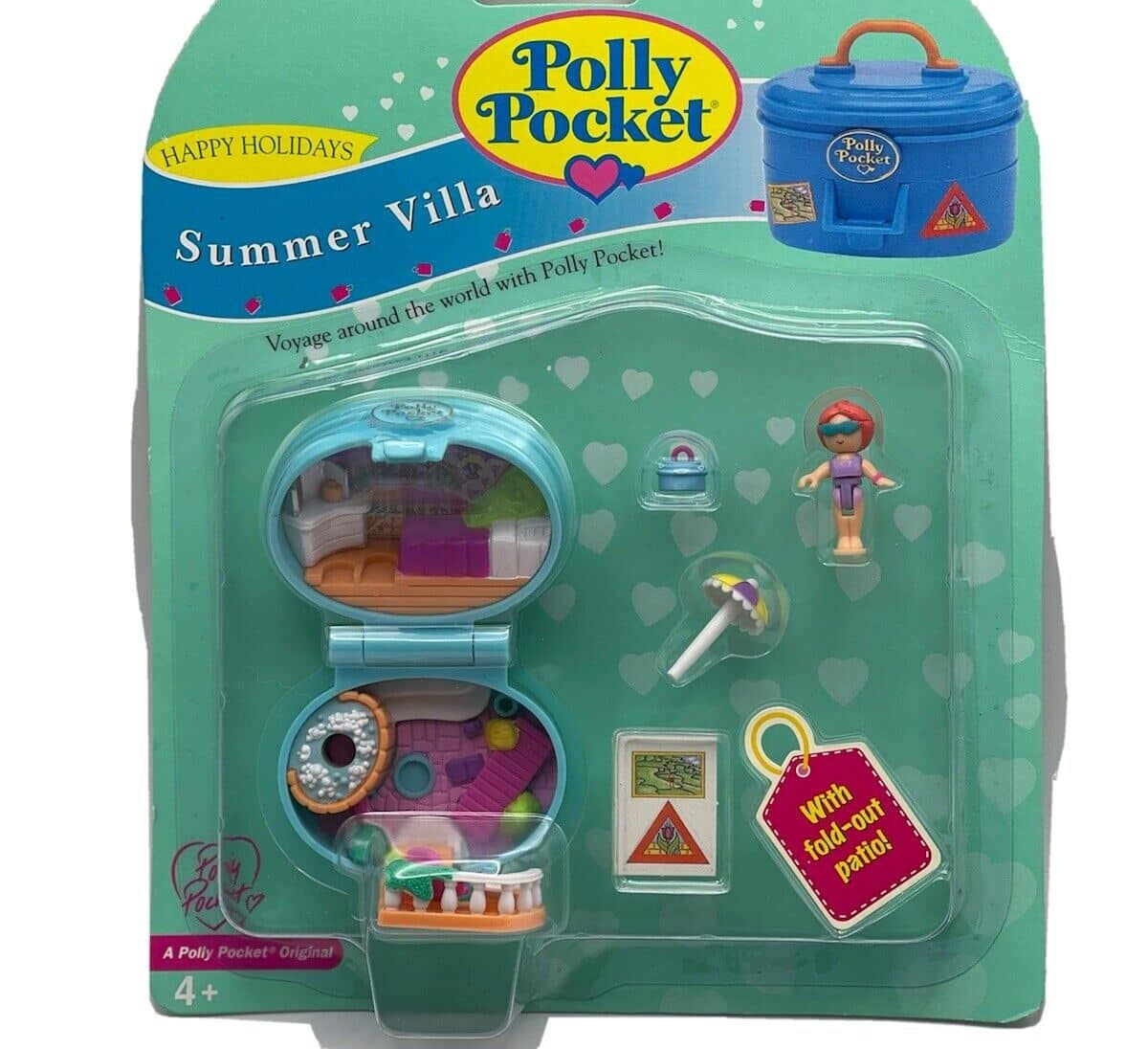 In the summer of 1996, just as the Macarena was sweeping the nation, your Polly Pocket could kick back in her own summer villa. The property fitted into an oval-shaped capsule and featured a balcony, vanity table, artwork, a parasol, handbag and jacuzzi. Mattel’s Barbie likewise has a summer villa, which also features parasols.

An August 2022 sale saw Polly Pocket’s summer villa go for $1,000. The toy in question came in mint-green packaging and was unopened, albeit with some creasing on its cardboard. 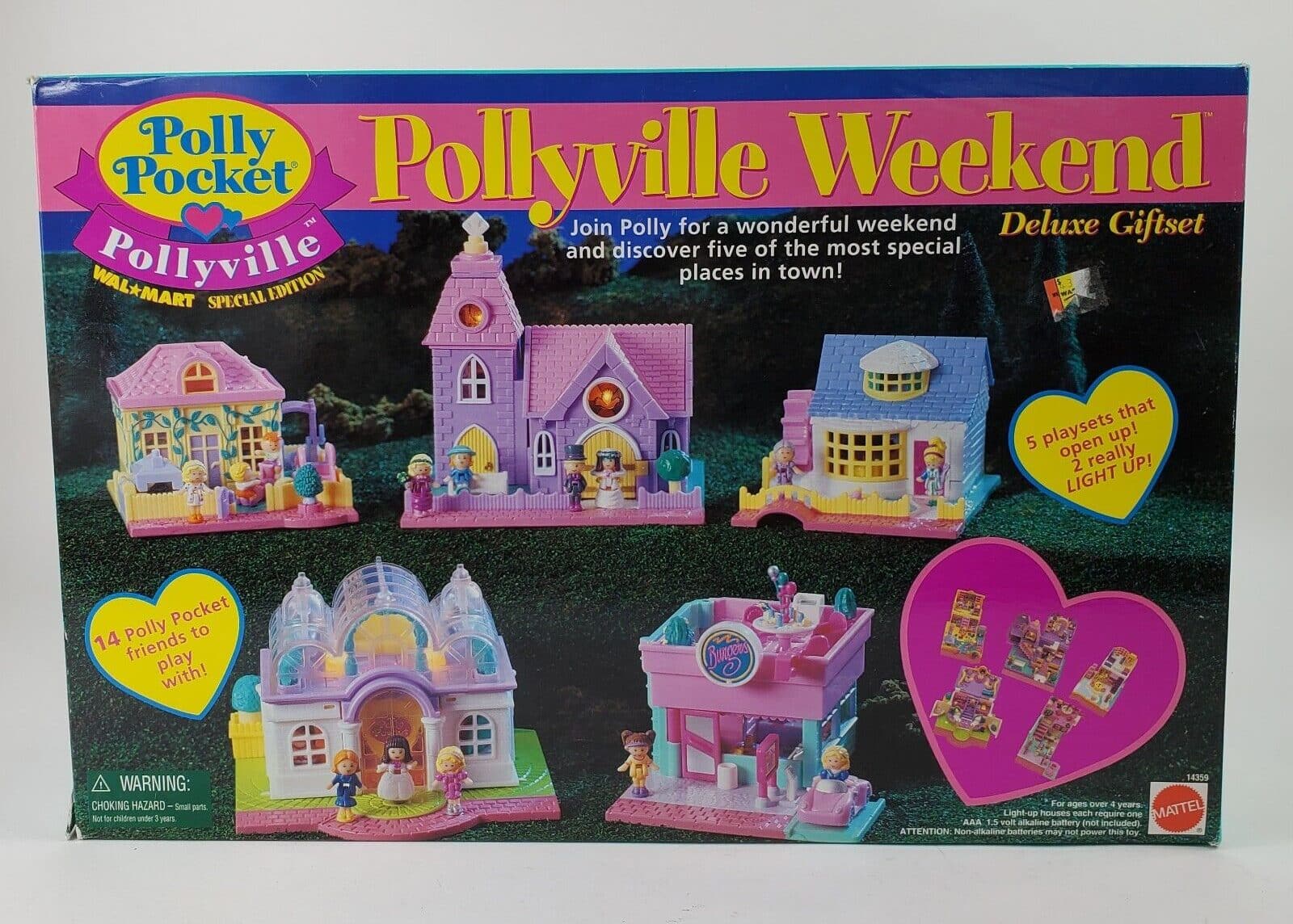 The Pollyville Superset packed a whole lot of plastic. It included a collection of five properties, including a palace and a burger bar. Released in 1995, this toy has considerable value as a vintage item, and it sold for $900 on eBay.com in June 2022.

[The] item is sealed and brand new,” wrote the seller, who was based in Kalispell, Montana. “The glue on one side has started to lift but is still sealed. Please see photos for exact item and condition of item you will be receiving.” 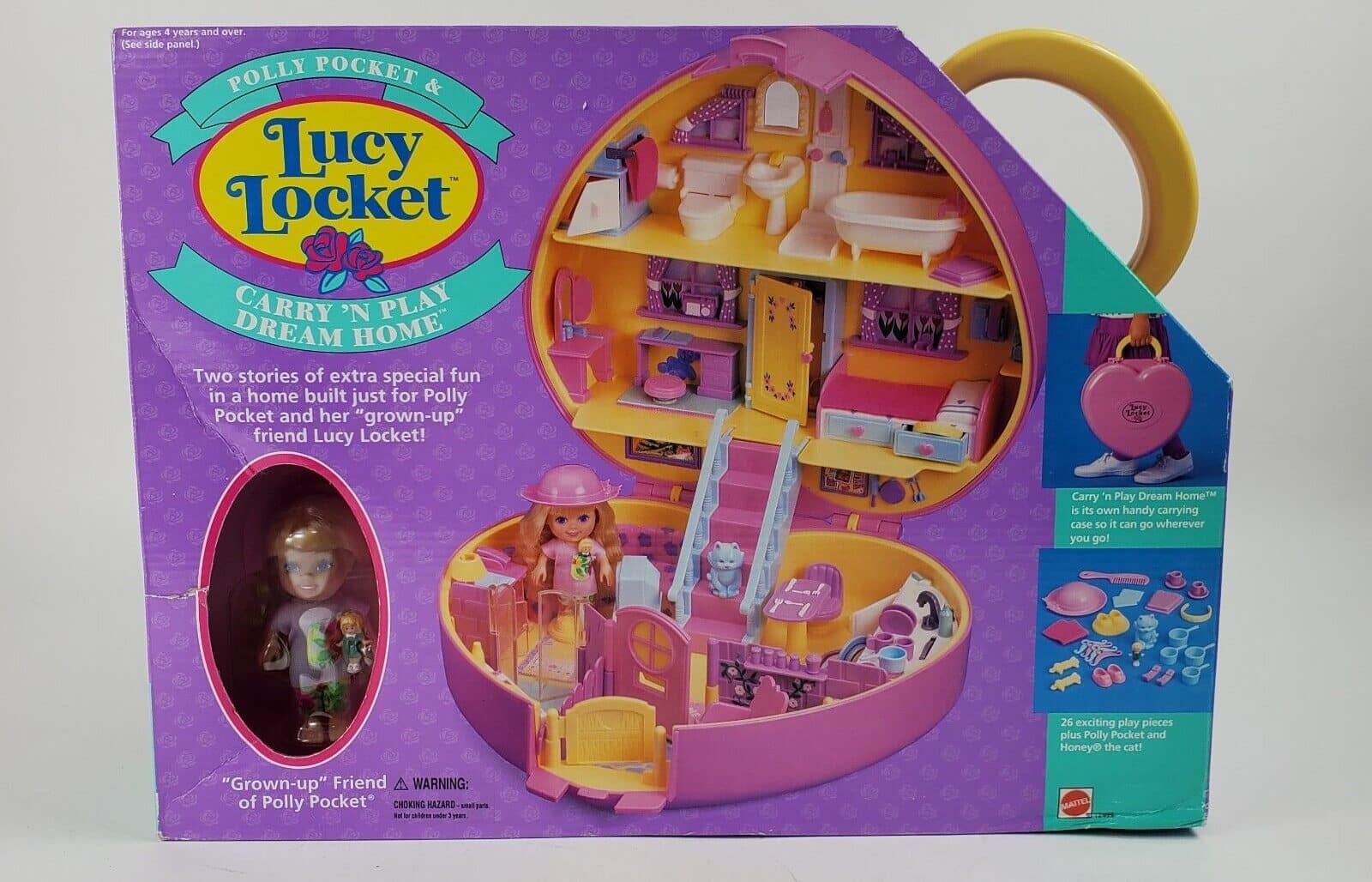 ‘Lucy Locket’ is the title of a traditional English nursery rhyme – but it’s also the name of Polly Pocket’s best friend. In a ‘Carry n’ Play Dream Home’ for the duo, you could find crockery, a comb, a blue cat and two pairs of shoes.

A complete, unopened example of this toy sold for $702 in June 2022. But even the most careful of collectors can run into problems with unopened toys of this age – with this toy dating from 1994. “[The] front of cardboard by figure does have a small rip,” the seller wrote. 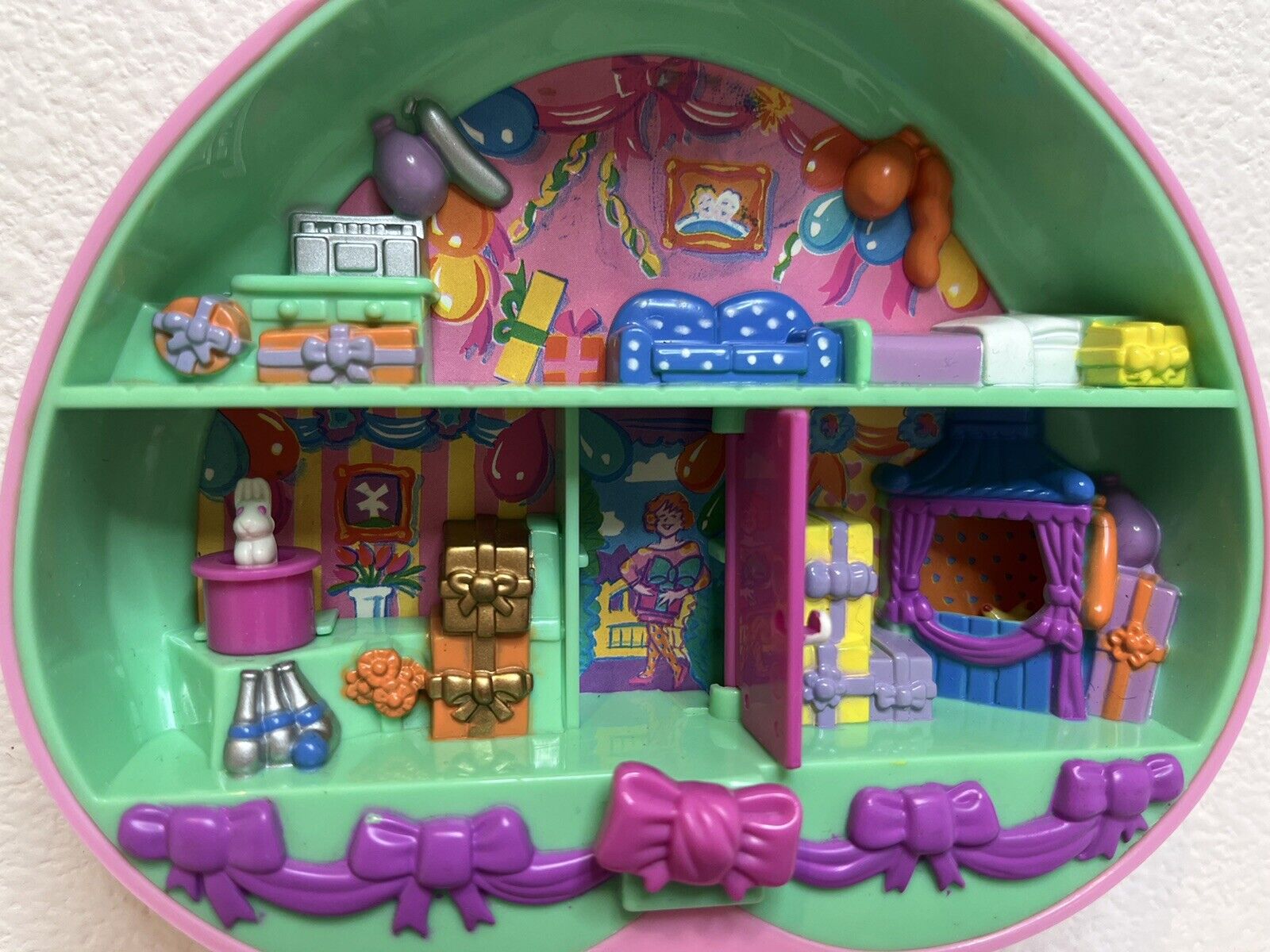 In 1992, Bluebird Toys released the Polly Pocket Partytime Stamper set, which came with a creative range of stamps, ink and a household with festive decorations. It was all contained in a pink, heart-shaped box. One of these toys sold for $599 on eBay.com in 2022.

“Super Rare and beautiful condition,” the seller, based in San Ramon, commented. “No dolls. No discoloration. Cake is a copy. All Action works: front door opens. Bow beneath front door twists for puppet to move and rabbit to pop out of hat.” 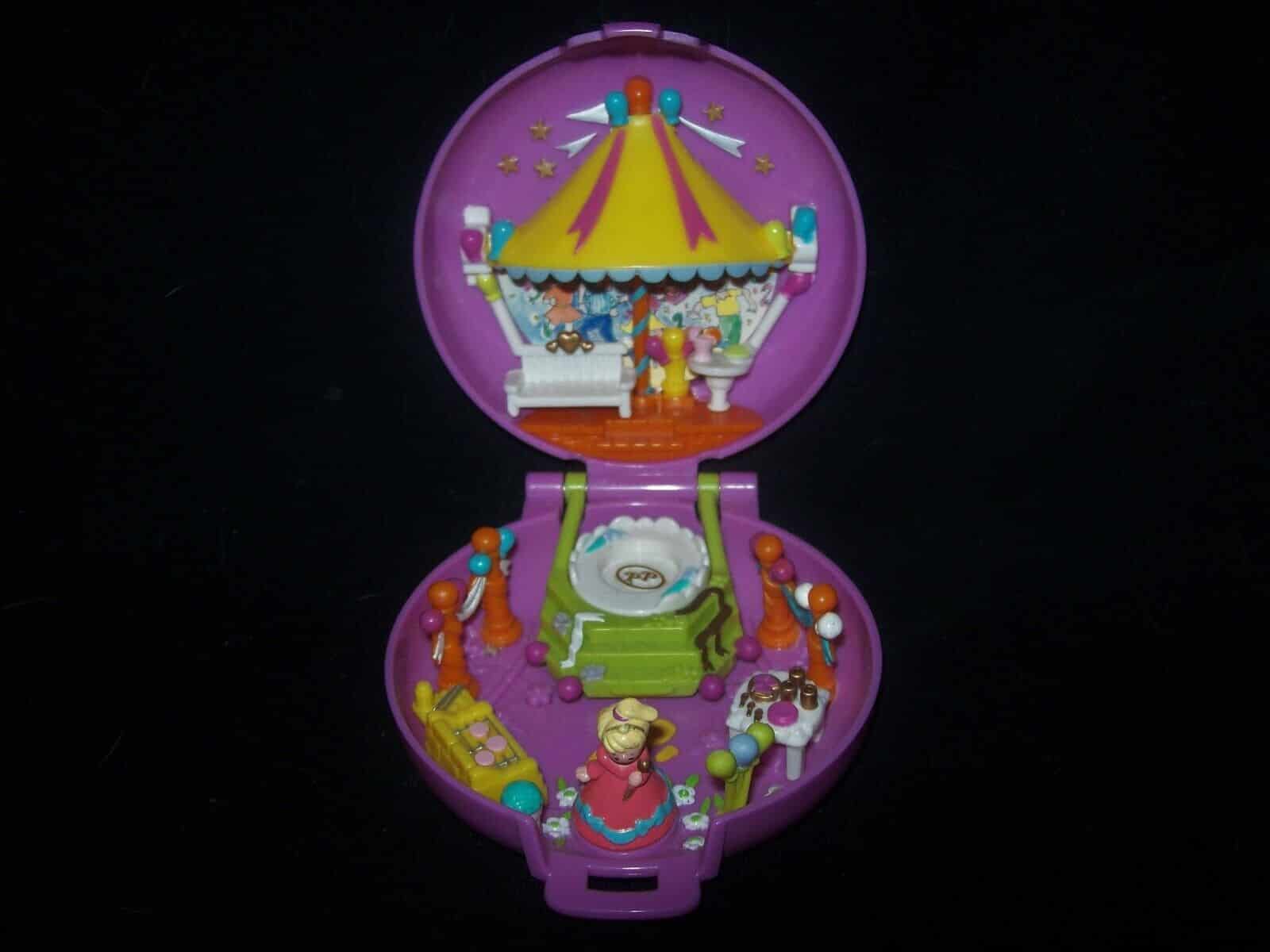 The 1997 Polly Pocket Carnival Parade boasted multicoloured scenery, a folding carousel canopy and folding stage steps. This cherished toy came with an ink pad and range of miniature stamps. One such toy sold for $592 in September 2022.

Unusually, this seller was based in Wishaw, United Kingdom rather than the States. When listing the item, the seller wrote: “Like New with NO colour change or sun damage. This has never been used – still has the plastic covering which I peeled back to check that the ink was still wet.” 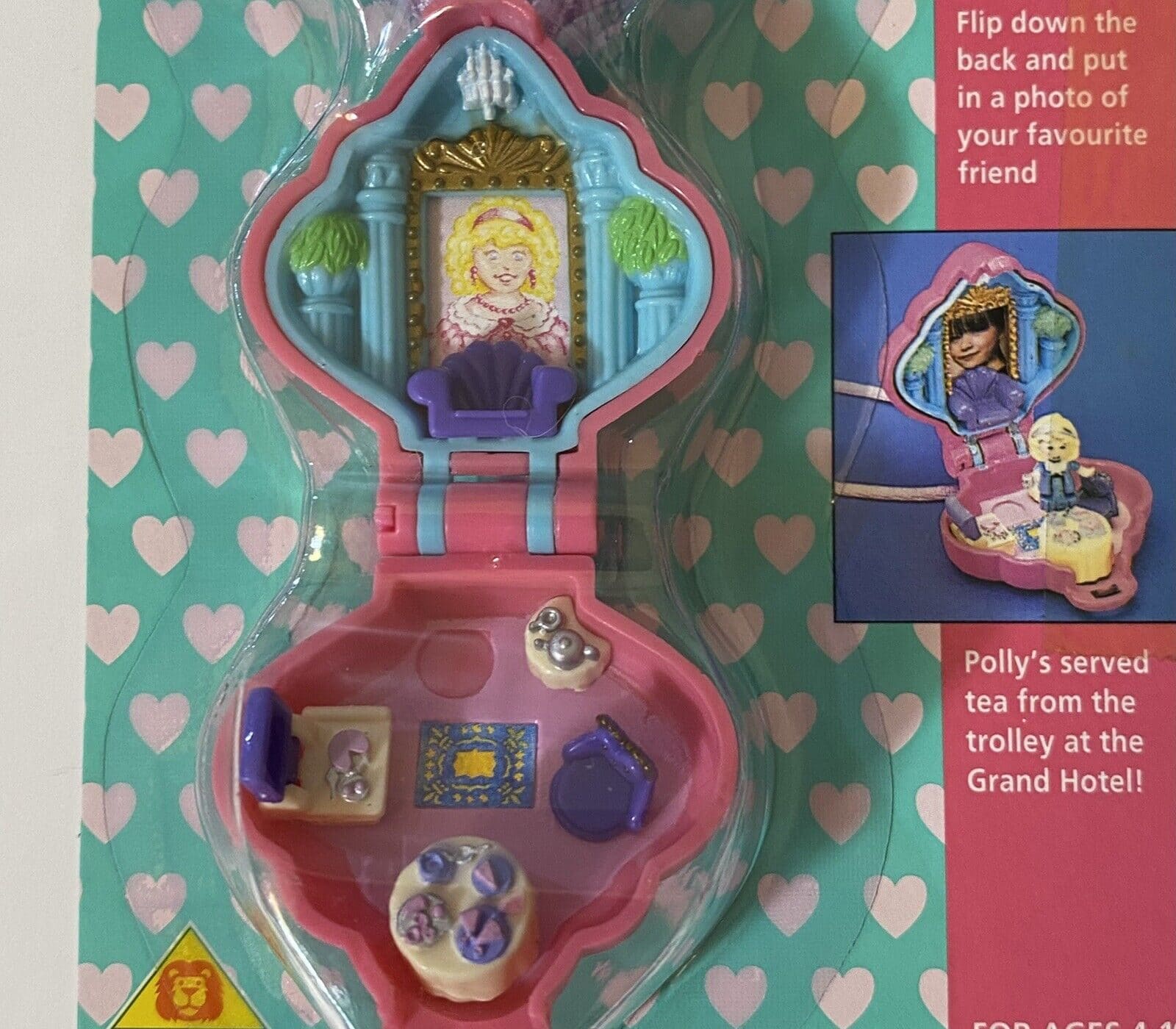 The minuscule Tea Time Locket featured fine dining, a tiny cake, a chandelier, a tea set and a throne. Back in 1995, you could customize this toy by filling the grand painting frame with any image – the packaging suggested, “Put in a photo of your favourite friend.” This toy sold for $540 in September 2022.

“[It is] sealed but packaging shows wear around the edges, has creases in a few areas and there is a long piece of tape on both the front and back right sides – please view all images,” the seller, based in Pembroke Pines, Florida, advised. 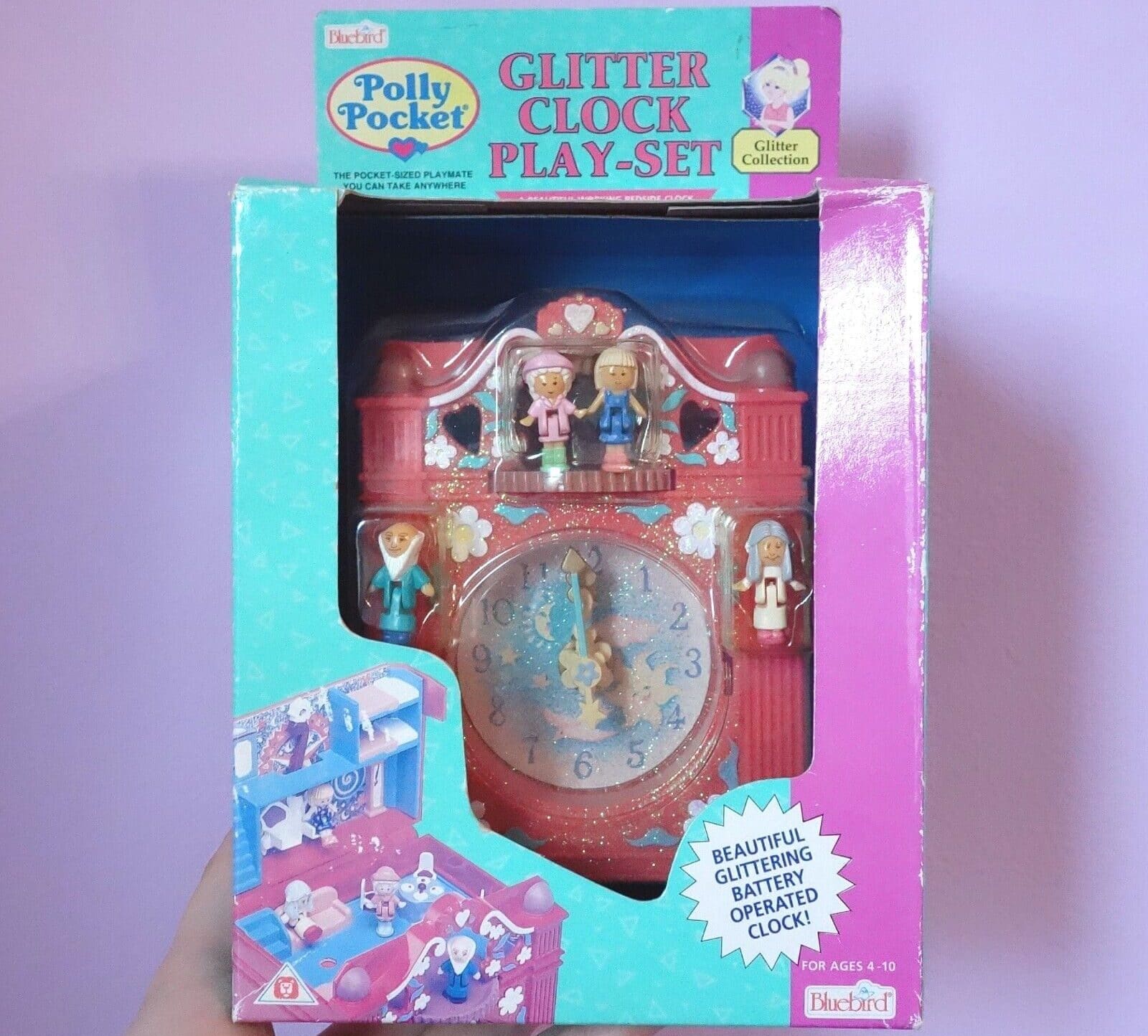 An original Bluebell toy, the Polly Pocket Glitter Clock bears the brand’s original tagline: “The pocket-sized playmate you can take anywhere.” But this particular toy was probably best left at home – a battery-operated timekeeper, it included four characters (including an elderly couple) arranged in the manner of a cuckoo clock.

Round the back, this clock contained a brightly-coloured home. This 1991/2 toy found a new home via eBay.com.au in August 2022, as the seller, based in Auburn, Washington, parted with the clock for $503. 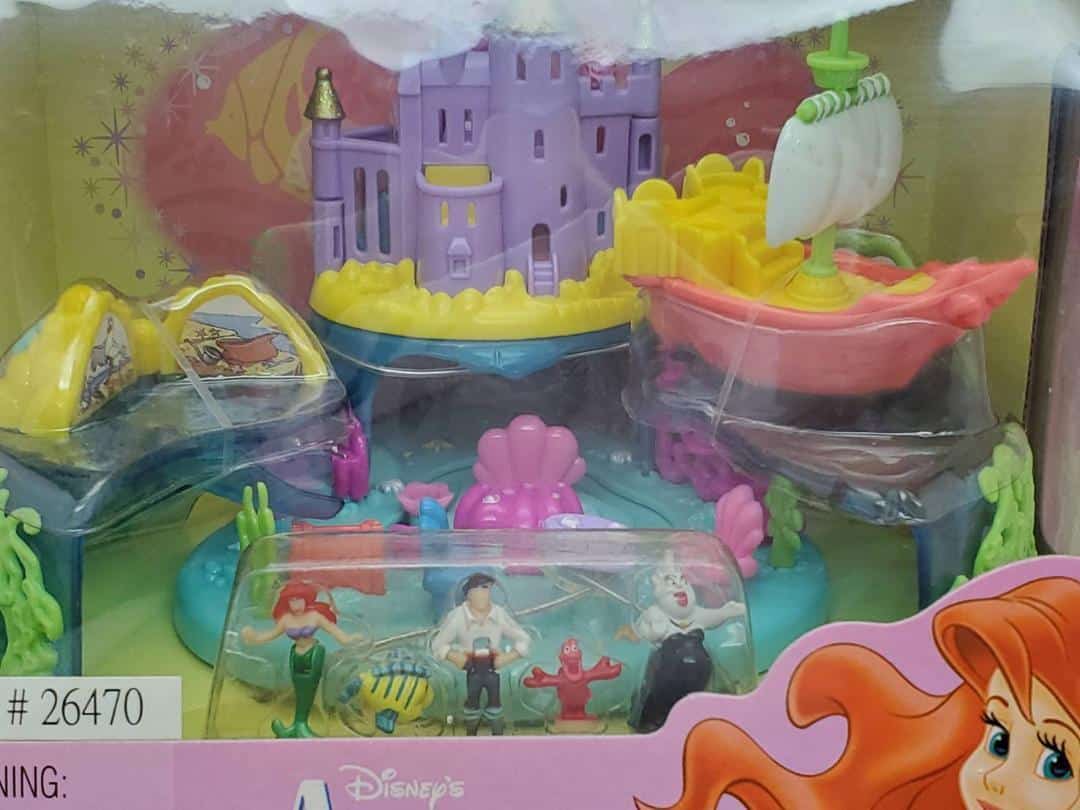 Based on the 1837 fairytale by Hans Christian Andersen, Disney’s The Little Mermaid came out in 1989 to critical acclaim. It introduced a new Disney princess to the world: the red-headed Ariel. By 1996, she too had made her way into the Polly Pocket franchise – before Mattel even took over the brand.

One Ariel Undersea Kingdom Castle by Bluebird Toys sold for $499 in August 2022. The seller, who used eBay.com to list the item, was based in Chigasaki, Japan. This particular toy was brand-new, unopened and therefore unused. 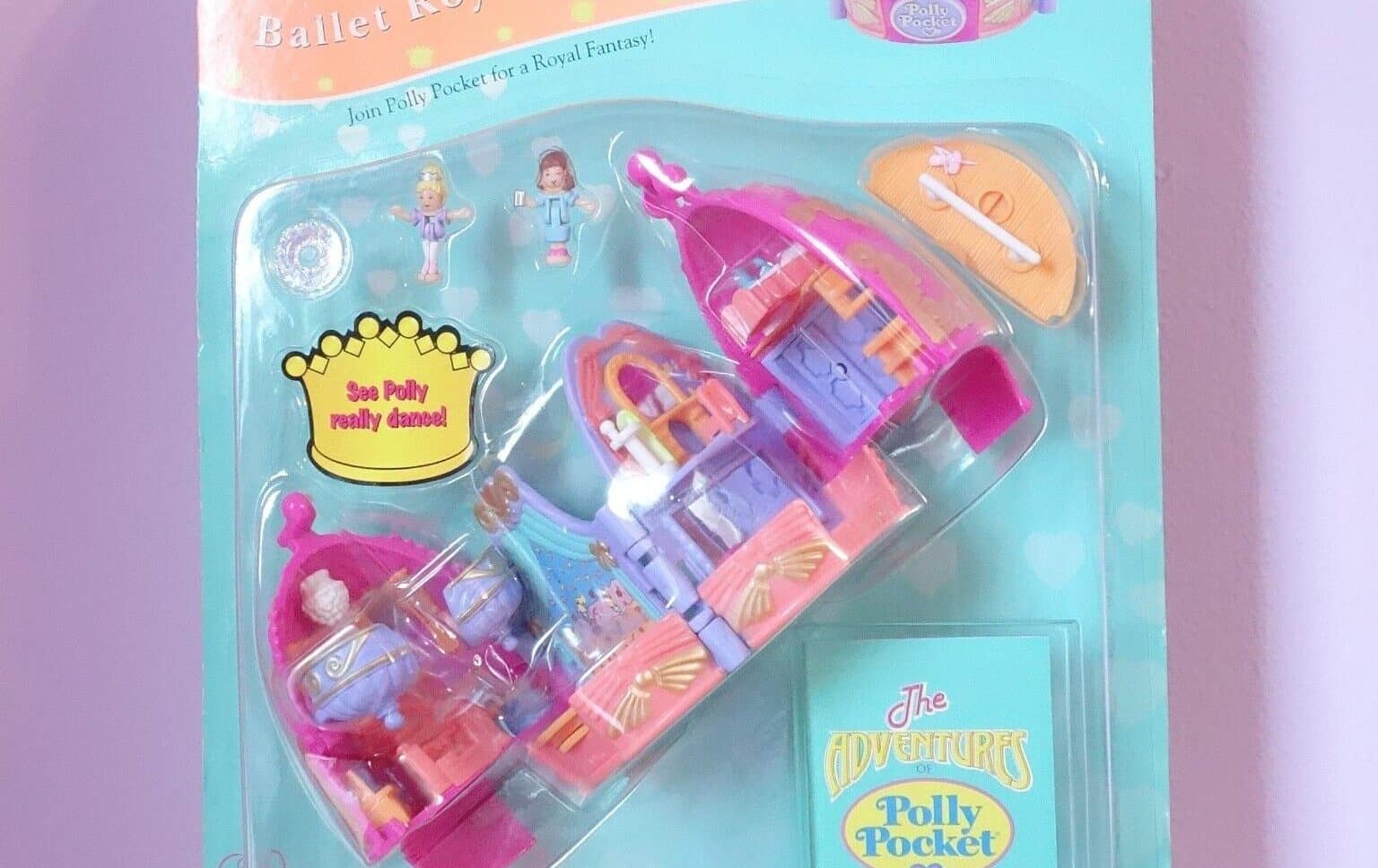 1996 saw the release of the Polly Pocket Sparkle Ballerina set. It contained a lavish stage and theatre, a dressing room, and a mechanism to make an on-stage ballerina twirl.

This set could be packed away into a tiny domed container inspired by the Fabergé Eggs, which were once the priceless jewelled playthings of the Russian royal family. As for these remarkable eggs, a seller from Auburn, Washington earned $450 from this treasured toy in August 2022.