How Much Are McDonald’s Teenie Beanies Worth In 2022?

Beanie Babies were explosively popular in the late 1990s, with collectors and fans fighting tooth and nail to get their hands on every new release. But lesser known is the lull that the toy suffered in the mid-90s, to the point where some retailers refused to stock the soon-to-be-famous plushies.

In response, Beanie Baby creator Ty Warner came up with a plan to catapult his toy to global fame: he teamed up with McDonald’s and put his toys into Happy Meals.

We’re taking a look at what the famous Happy Meal Beanie Babies – or Teenie Beanies – are worth today, and how long they managed to hold the spotlight in the fiercely competitive world of toys. 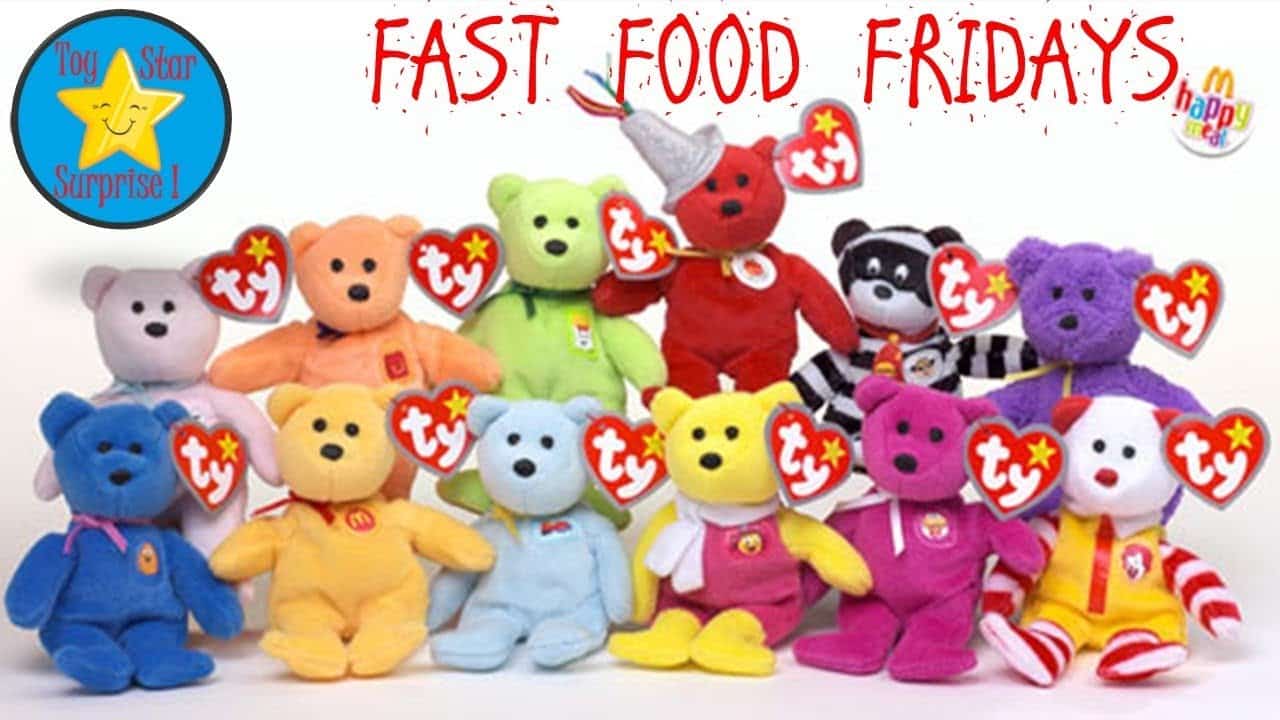 Beanie Babies first entered production in 1994, with nine original, simple toys: Legs the Frog, Squealer the Pig, Spot the Dog, Flash the Dolphin, Splash the Whale, Chocolate the Moose, Patti the Platypus, Brownie the Bear and Pinchers the Lobster.

Their inventor, Ty Warner, had little idea at the time that these simple playthings would blossom into a billion-dollar industry with 822 different toys on offer.

However, the toy was slow to sell in its earliest years. From Warner’s small business in Chicago, toy stores rarely wanted to purchase even six Beanie Babies at a time. Others showed no interest in his product at all. 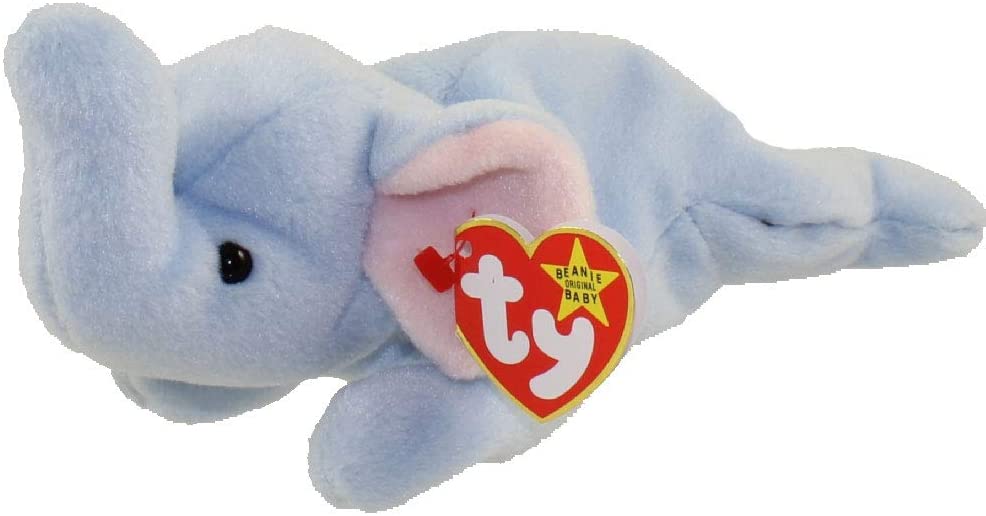 Warner remained confident nevertheless, writing to one employee: “Most retailers don’t know what they’re doing. When retailers are angry with you, it means you have a good product.”

Beanie Babies gained greater popularity with the release of the blue elephant Peanut in 1995. A change in colour from royal blue to light blue meant that buyers started to hunt down the rarer, darker shade, and Beaniemania was born.

Ty Warner devised a system of scarcity to boost Beaniemania, in which he only produced a limited number of each toy edition. However, he was torn between his desire to sustain the craze, and to create widely and cheaply available toys. 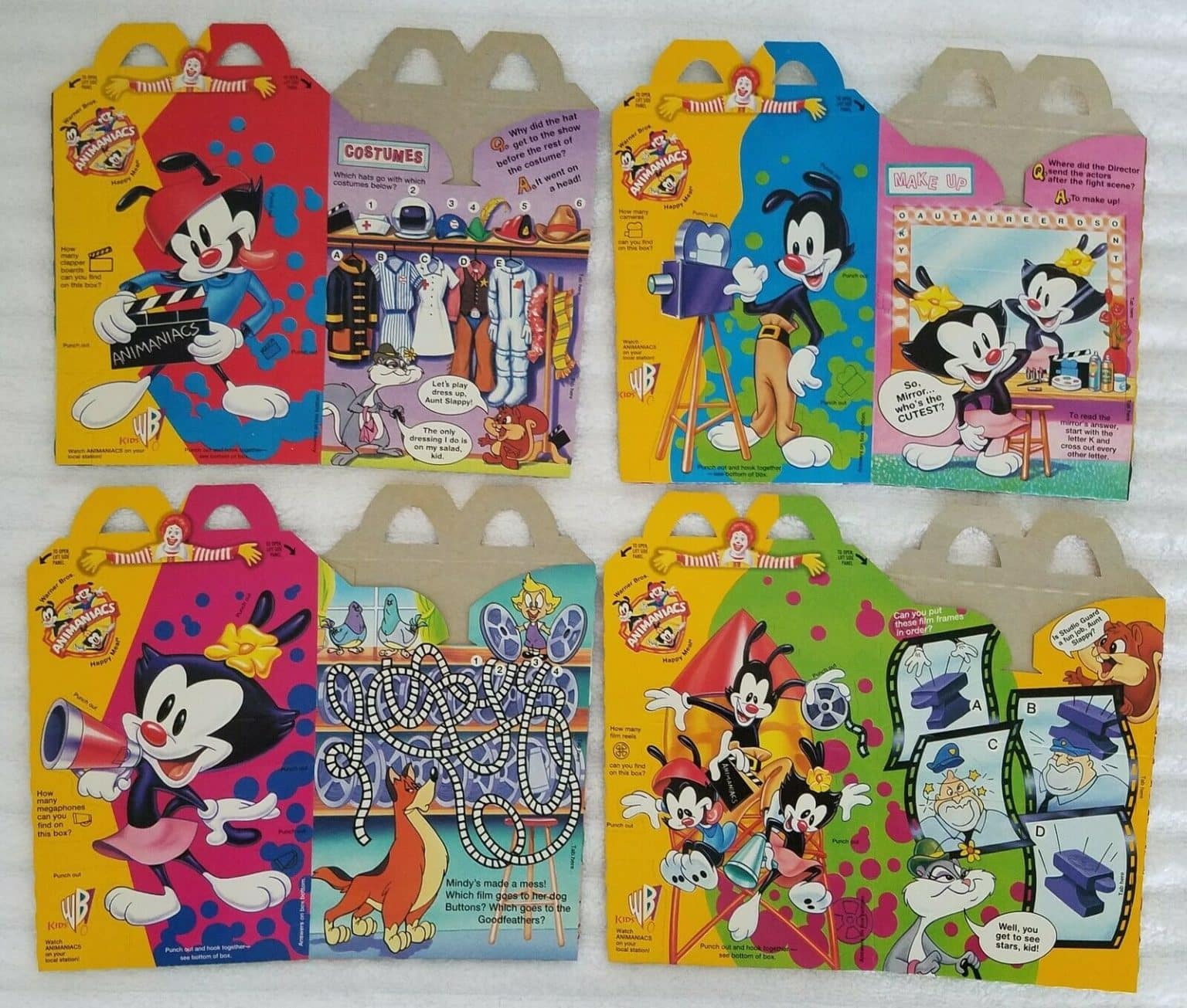 Warner turned down various partnerships in the early 90s, including offers from five television studios and Steven Spielberg. But in 1996, he received an offer he couldn’t refuse: McDonald’s wanted to team up with Beanie Babies.

For this deal, Ty Inc produced 100 million Teenie Beanies, a miniaturized version of the classic toys. Warner saw McDonald’s as the perfect place to promote his toys to less wealthy American families. 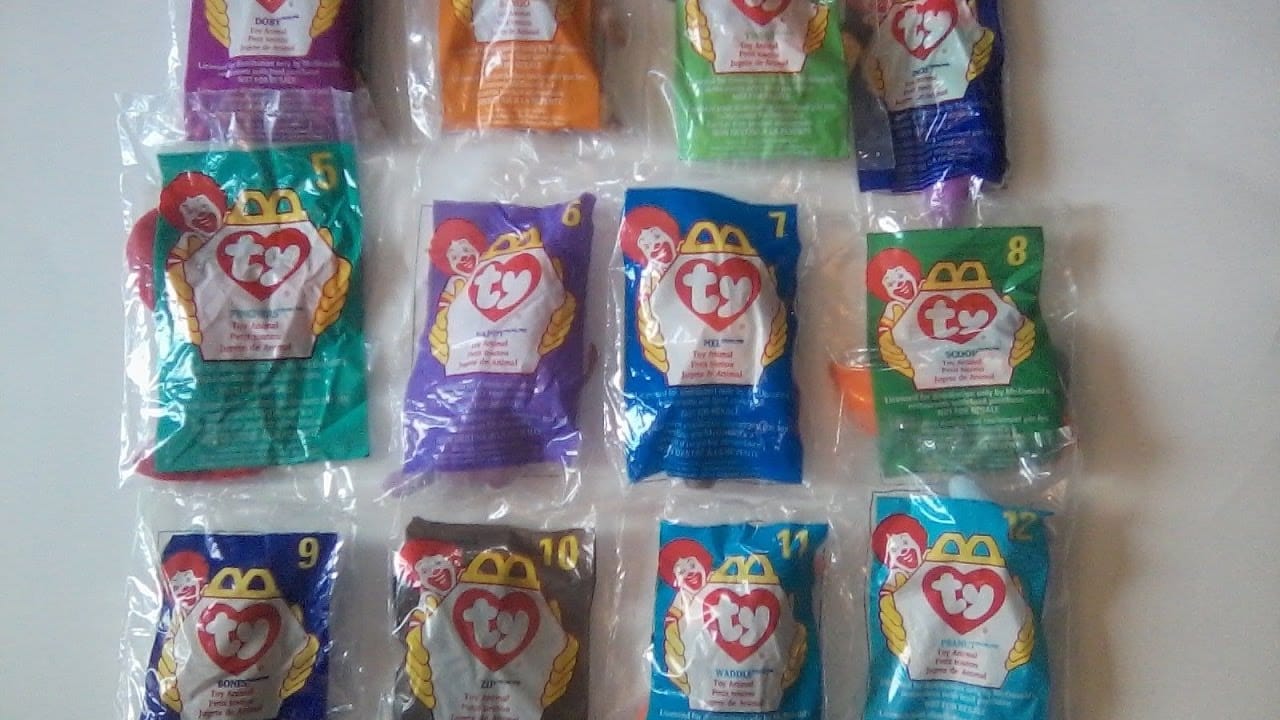 This new licensing agreement allowed McDonald’s to include the toys in their Happy Meal promotions. McDonald’s anticipated that it would sell “one [Teenie Beanie] for every household in America within a span of just a few weeks.”

In fact, this was a massive underestimate. The entire stock sold out in the space of ten days. In a frenzy, fans called McDonald’s stores relentlessly. According to journalist Zac Bissonnette, author of The Great Beanie Baby Bubble, restaurants received “15 to 20, sometimes 25 calls every half-hour” about the McDonald’s Teenie Beanies. “Some customers ordered a hundred Happy Meals and asked the cashier to keep the food,” Bissonnette also notes. One branch in Ohio began answering the phone with: “Good morning, McDonald’s. We have the moose and the lamb.”

McDonald’s even cancelled all television advertising about the promotion, citing concerns for employee safety and “massive crowds” forming at their restaurants. 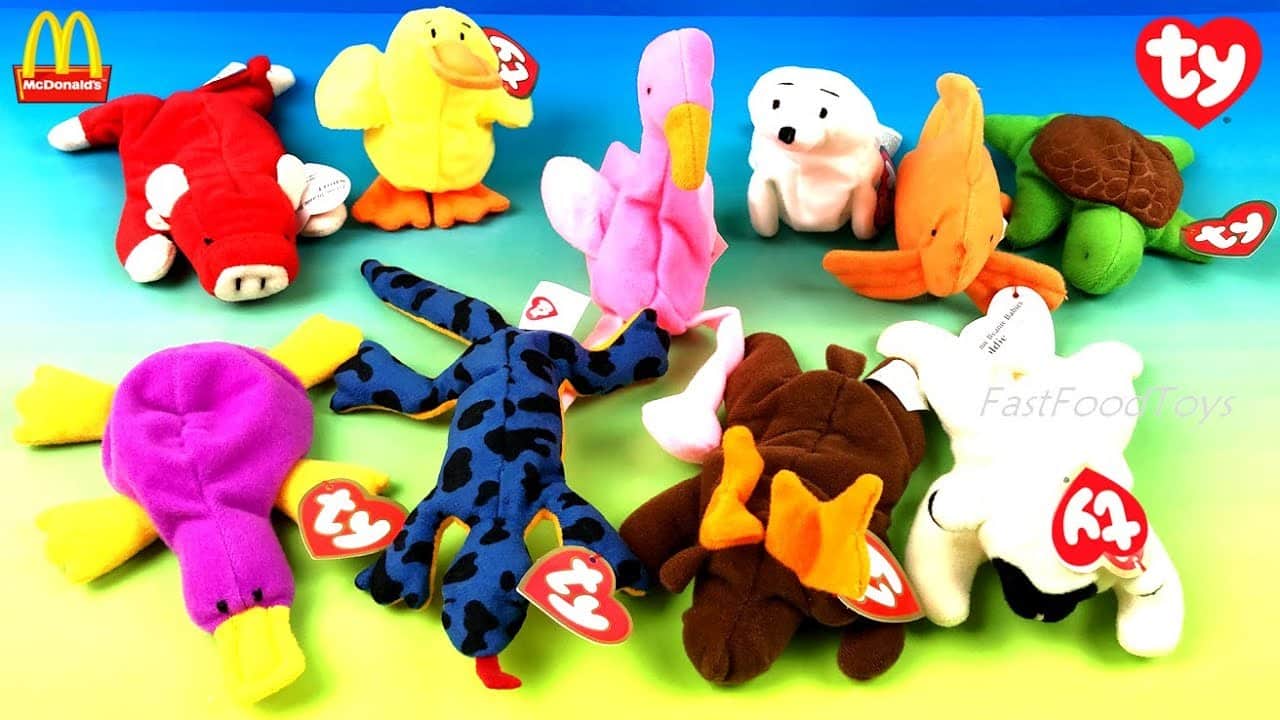 By 1998, Ty Inc had made over $1.3 billion in sales, and Warner gave every one of his employees a bonus equal to their annual salary. Meanwhile, over 64% of Americans had at least one Beanie Baby at home.

10 Teenie Beanies were included in the original 1997 promotion: Patti the Platypus, Pinky the Flamingo, Chops the Dog, Chocolate the Moose, Goldie the Goldfish, Speedy the Turtle, Seamore the Seal, Snort the Bull, Quacks the Duck and Lizzy the Lizard. 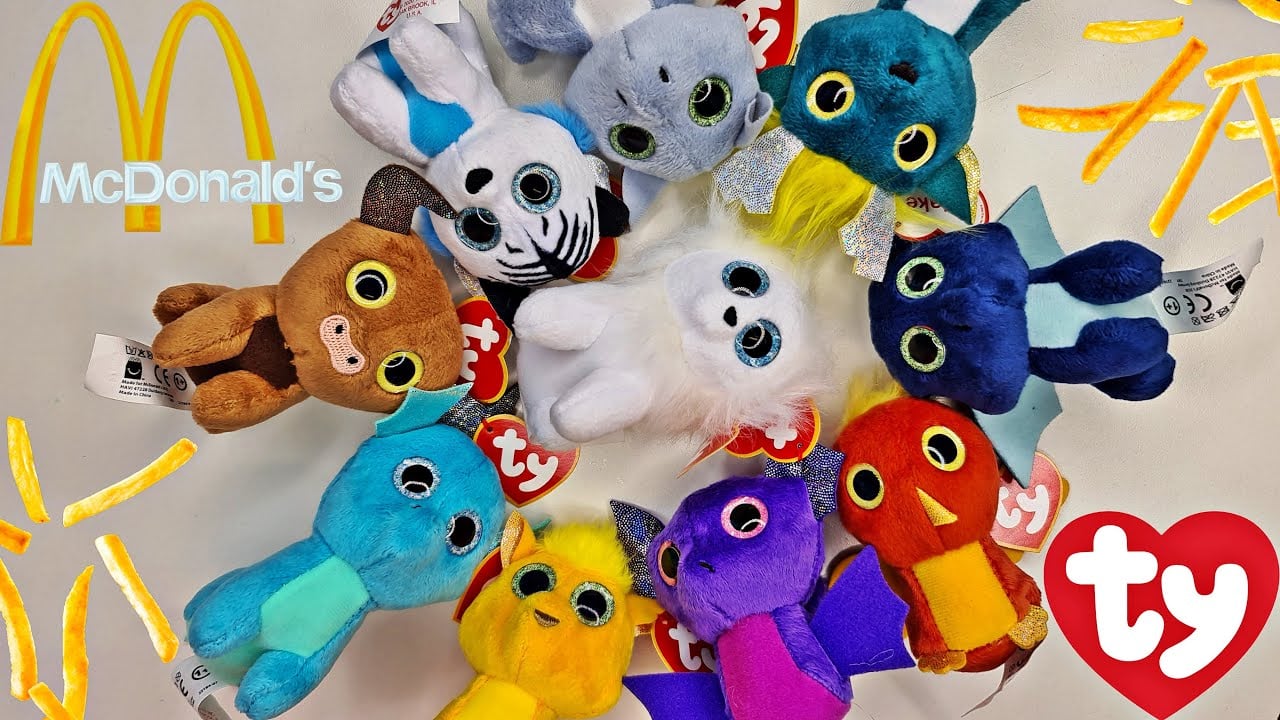 Teenie Beanies hit McDonald’s restaurants once more in 2021 to commemorate the 25th anniversary of the Happy Meal. On this occasion, the Teenie Beanies resembled famous McDonald’s characters, including Ronald McDonald, Birdie, Hamburglar and Grimace.

Due to their mass production and distribution in the late 90s, Teenie Beanies are by no means hard to find today. As a result, the McDonald’s Beanies are not particularly valuable at all.

Often sold as entire collections on eBay, a 1997-2000 McDonald’s Teenie Beanie is usually priced at around $2-9. While prices as high as $14,500 do surface occasionally for individual Teenie Beanies, experts have warned that you should be wary of high online asking prices. 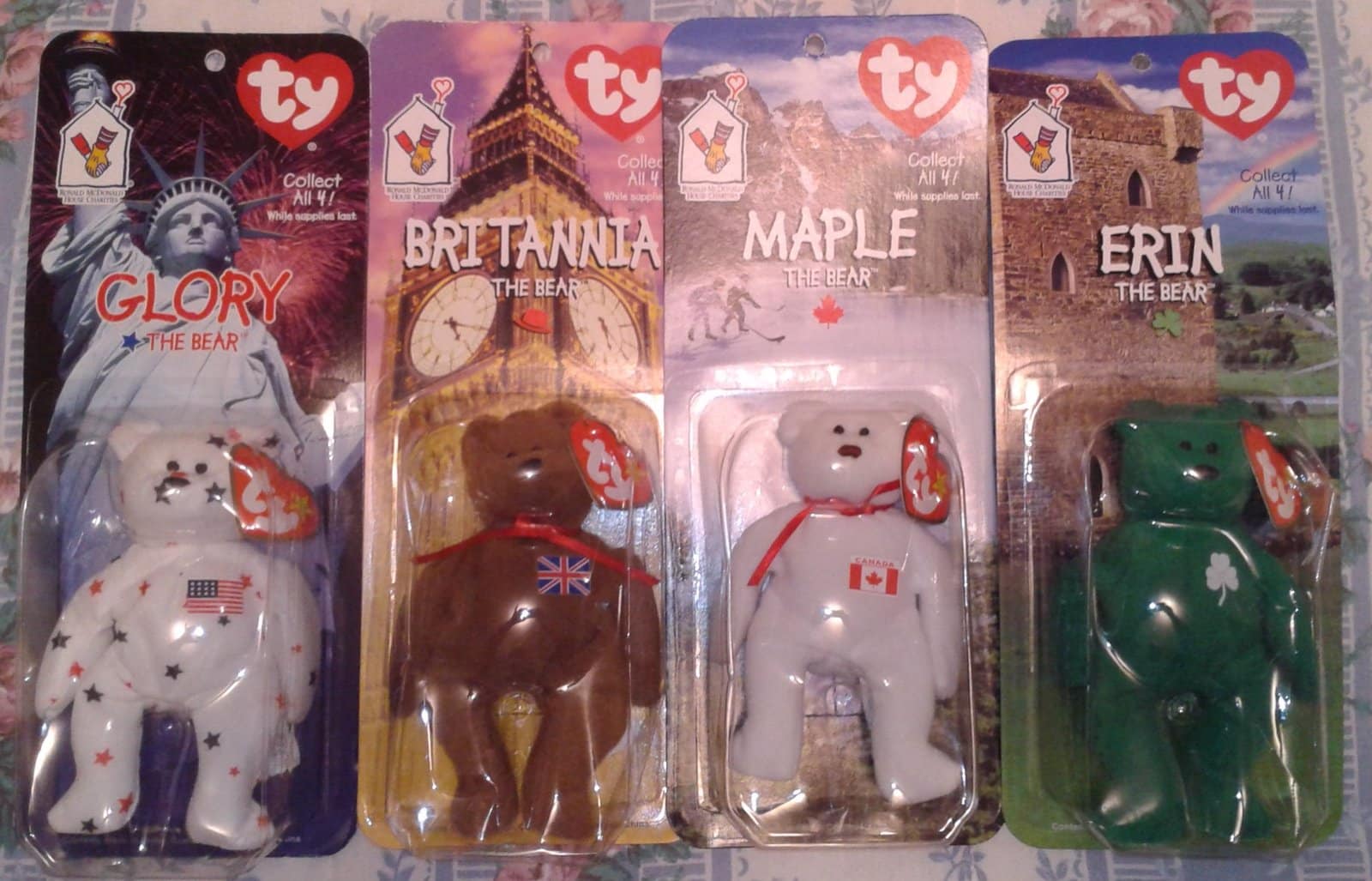 Collector and expert Karen Boeker has even warned that money laundering may be behind improbably high offers on eBay.

Genuine offers on the British eBay tend to be below £6 per vintage Teenie Beanie. There are many offers for ‘vintage 1993 McDonalds Teenie Beanies’; however, this year long predates the launch of the McDonald’s Beanie.