Could this be the strangest sight of the 80s? As Christmas approached in 1983, Nancy Reagan – wife of US President Ronald Reagan – invited swathes of journalists into the White House. Characterised as uptight and old-fashioned, Nancy was hoping to change up her public image. She ushered in TV star Mr T, dressed as Santa Claus. Then Nancy Reagan sat on Santa’s lap, and even gave him a kiss on the head. It was a spectacular, fleeting moment for the press – but Mr T and Nancy Reagan became close friends as a result of their absurd encounter.

This unlikely friendship lasted for the rest of Nancy Reagan’s life, with Mr T paying tribute to the former First Lady after her death: “She was very special to me.” How did their publicity stunt turn into a lasting bond? 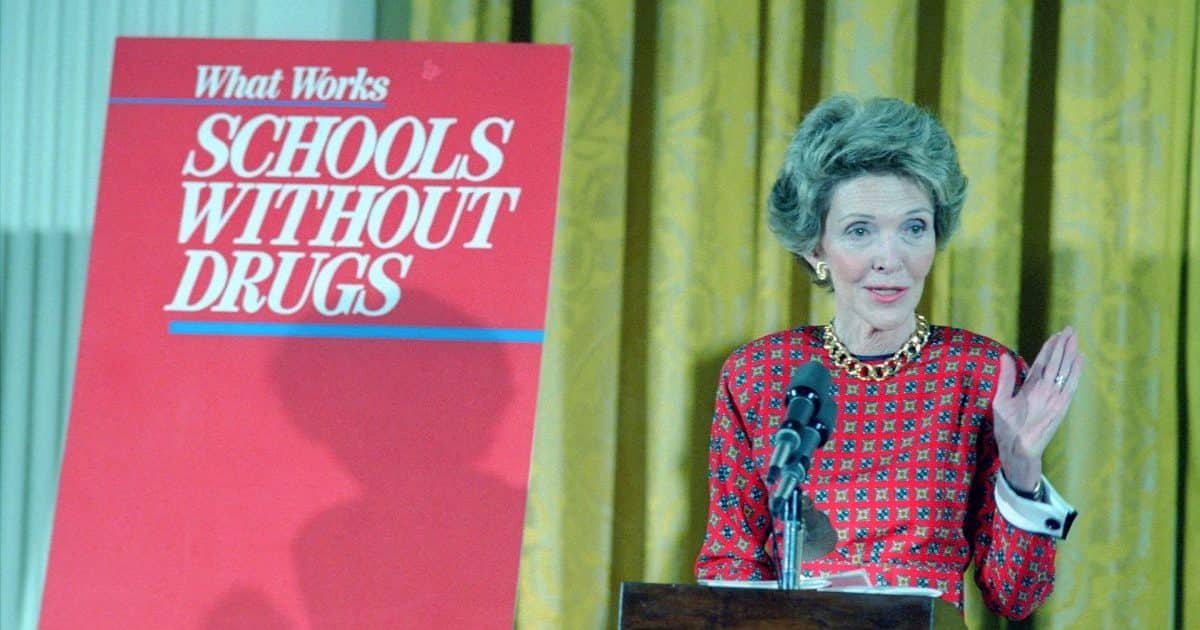 Nancy Reagan became the First Lady in January 1981, as California governor and former actor Ronald Reagan won a landslide victory. At first, she was unpopular, as she accepted free designer clothes and replaced the White House china. She seemed extravagant and out-of-touch.

But Mrs Reagan found her footing in the early 80s as she launched the ‘Just Say No’ campaign. It was a vehement message to young people, teaching them about the risks of drug use and addiction. She would eventually travel over 250,000 miles globally for this campaign, speaking at schools, prevention programs and rehab centres. The 1983 White House Christmas Party for the press was the perfect opportunity to promote her new image as an anti-drugs campaigner. And so, as the party began, Nancy Reagan made an announcement to the waiting press corps. 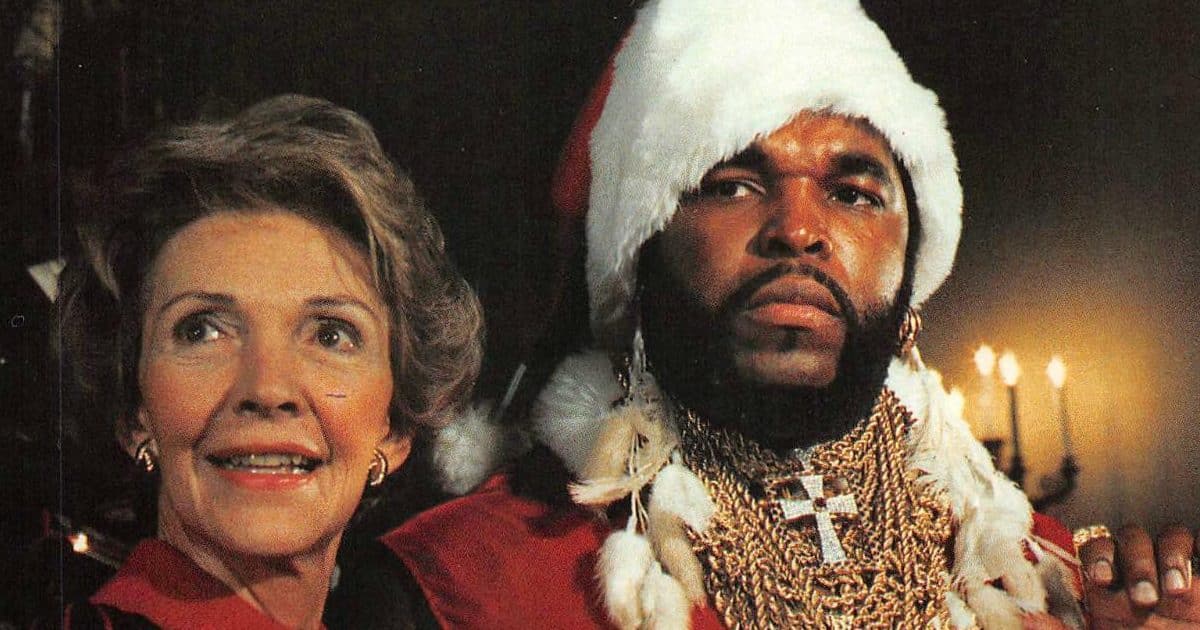 “This year, we have a man whom I admire a lot, who has spoken out against drugs very forcefully,” she said. “… And when I called, he offered to be Santa Claus.” Mr T then entered with jingling sleigh bells and a few roars. Famed for the hit TV show The A-Team, Mr T was a 31-year-old actor and former wrestler. He was outspoken about child abuse and the danger of drugs among America’s youth.

After settling down by the Christmas tree in full Santa regalia, Mr T wished different press attendees a Merry Christmas and handed out Mr T dolls as gifts, all while Nancy Reagan stood by his side. 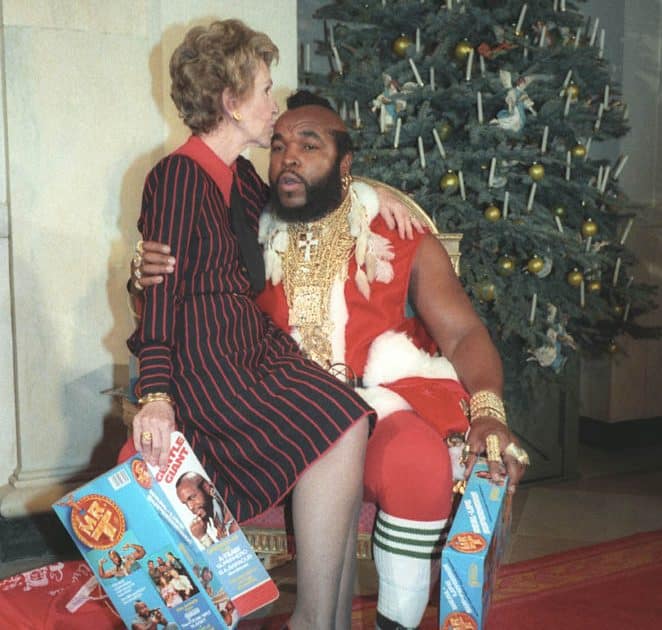 One male photographer perched on his lap, and Mr T joked: “You been good? You haven’t? Well I’m gonna see you in a few minutes. If you print something bad about me or the First Family, I will be calling upon you.” Nancy Reagan quipped to the onlooking journalists, “You’re all listening to that, aren’t you?” In the most photographed moment of the event, Nancy Reagan also perched on Santa’s lap and gave him a kiss on the forehead. The moment seemed to be unplanned, as Mr T exclaimed: “Oh wow! Now that’ll start some scandals. Thank you Mrs. Reagan. Wow, she kissed me!”

“It’s so unexpected,” noted the image archivist Michelle Gullion decades later. “It’s a side of Nancy Reagan. She just wasn’t known for her playfulness at all.” 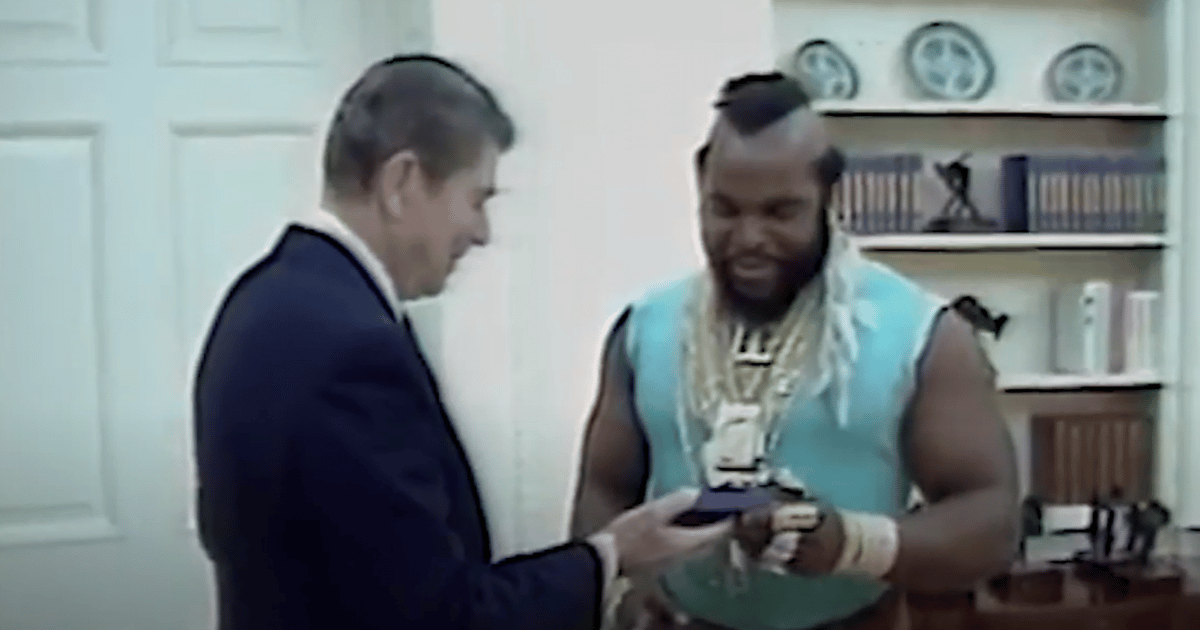 Afterwards, Mr T changed into his standard tank top and chains to meet with Ronald Reagan in the Oval Office. Reagan gave the blinged-up star a belt buckle as a Christmas gift. “I’m glad that your wife invited me, and I’m glad that I’m on her team,” Mr T told the President. “… I had so many things I’ve been wanting to say, and now seeing you, I’m getting all choked up,” he added. “I don’t know what to say!”

Mr T also spoke to Reagan sympathetically about the trials and tribulations of leading the nation. “Do I have any presents for the first family? I say, all I have is love, because I know your job is rough, it’s not easy,” he told the President. “Some people don’t like some of the things you say, some people hate you. You can’t please everybody.” 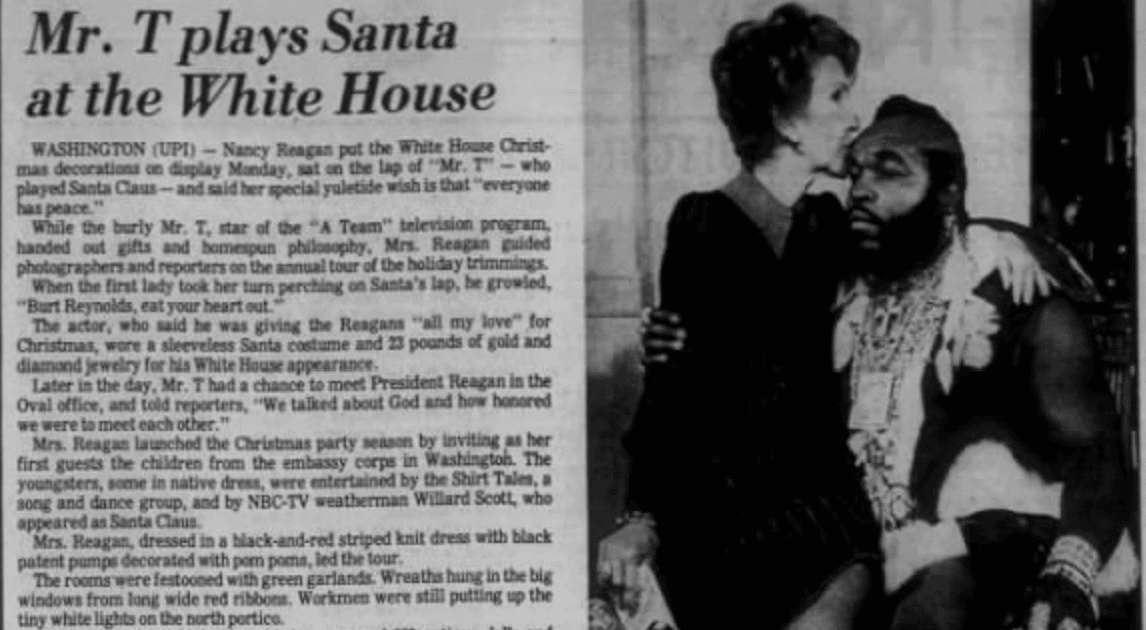 The event was a triumph for Nancy Reagan, as this surprisingly tender friendship was captured on camera and printed and broadcast across the nation. She soon invited Mr T to join her Just Say No campaign, and the pair formed a partnership to spread the anti-drug message. In the following year, Mr T released the motivational video Be Somebody… or Be Somebody’s Fool! and the rap mini-album Mr T’s Commandment, which encouraged children to ignore peer pressure, stay in school and stay away from drugs.

On a more cynical note, recent commentators have pointed out that the Reagans were masters of media manipulation. Nancy was fundamental to Ronald Reagan’s image, and the new publicity around her friendship with Mr T showed the First Lady in a more positive light as the White House became embroiled in racial justice issues. 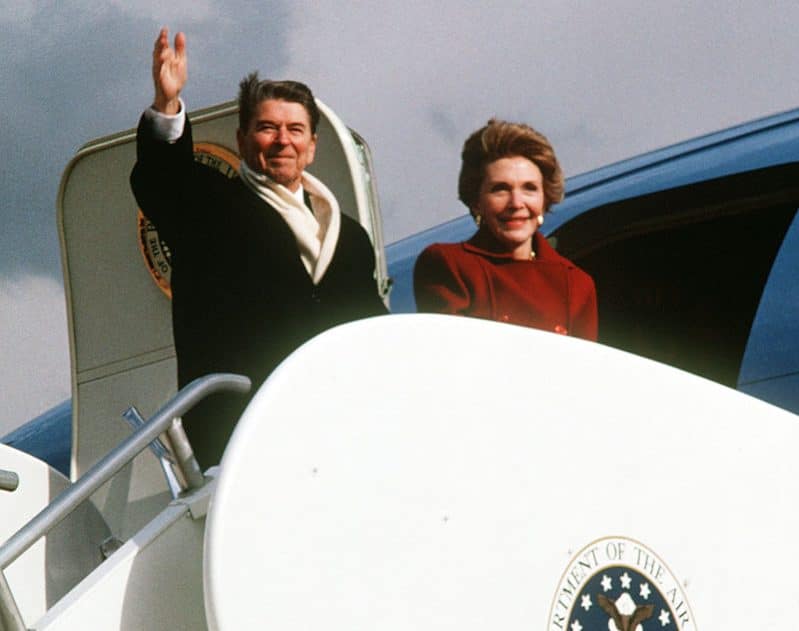 Ronald Reagan was accused of using racist dog whistles. He permitted housing discrimination to continue in the USA, saying, “If an individual wants to discriminate against Negroes or others in selling or renting his house, it is his right to do so.”

“I really do think Nancy had a greater sway than keepers of the flame would like us to think,” documentary maker Matt Tyrnauer reflected. “It’s also interesting to look back at her through a post-Hillary Clinton lens, which hasn’t really been done. They both wielded enormous influence as first lady, but Nancy was determined to hide that.” Nevertheless, the friendship between Mr T and Nancy Reagan was genuine, and it was sustained in private until the end of Nancy’s life. 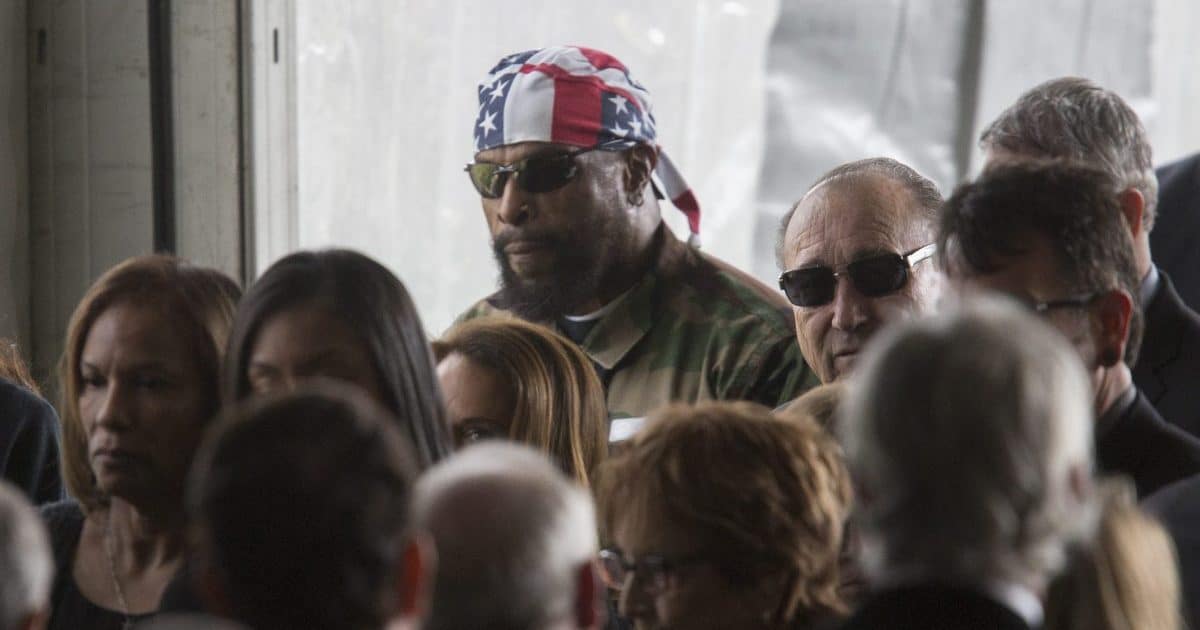 According to Sheila Tate, who was Nancy Reagan’s press secretary in the White House, the First Lady was a warm and loving character.
“I was not surprised that [Mr T’s and Nancy’s] friendship continued,” she told The Washington Post in 2018. “Nancy Reagan, if you became her friend, you were her friend for life. And that’s the way they were. They never lost contact.”

When Nancy died of heart failure in 2016 at the age of 94, Mr T attended her funeral. He wore camouflage gear and a Stars and Stripes bandana. 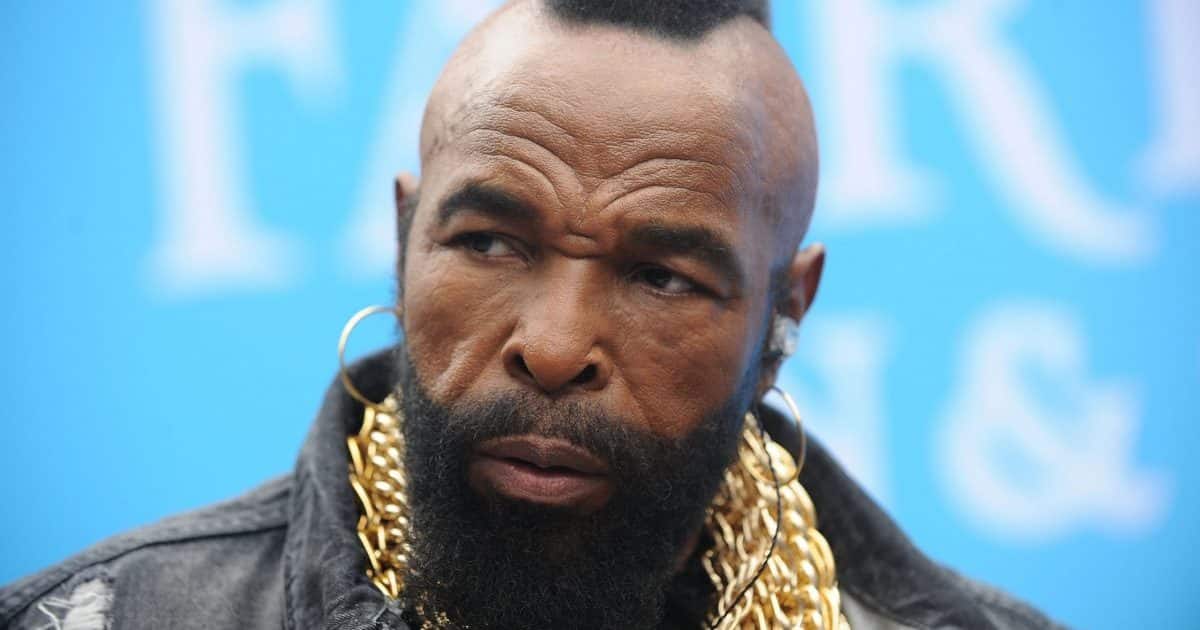 Mr T also took to Twitter in the wake of the former First Lady’s death. “Not only did she invite me to the White House in December ’83, after meeting with her and President Ronald Reagan, she then asked me to help her with her ‘Just Say No’ program which I gladly accepted with humility and honor,” he wrote.

He described the anti-drugs campaign with Nancy Reagan as “the highlight of my career … I will truly miss First Lady Nancy Reagan,” he summarised. “I will Never Forget her. I will continue her work in trying to keep kids from the Dangers of Drugs. GOD Bless You First Lady.”