Holly Willoughby was clearly in party mode after the end of her hosting stint on I’m A Celebrity…Get Me Out Of Here.

Shortly after crowning football manager Harry Redknapp as the King of the Jungle, Willoughby made a hilarious drunken appearance on This Morning. She was talking to Phillip Schofield and Rochelle Humes via video link from the I’m A Celeb wrap party, complete with a drink in hand.

Willoughby was swigging margaritas and chatting to Phil and Rochelle about how she was enjoying being up late in Australia – normally she has to go to bed at 5:30pm every day to get enough sleep before her 2:00 am wake-up call.

Scroll down to see the whole interview below.

Holly exclaimed: “This is the latest I have been up! I usually go to bed at 5:30PM. Get up at 2AM. I’ve never see night-time out here!” 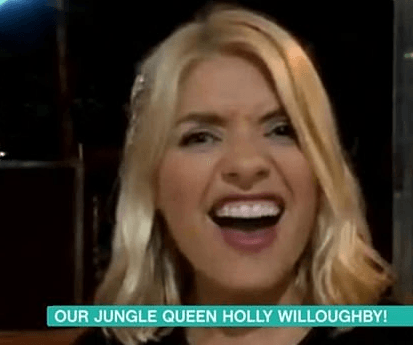 She also explained that she had “walked out of the wrap party with a margarita” to appear via video link. The presenter joked: “I look like I’ve fallen out with my boyfriend and am loitering on the streets.”

This Morning viewers loved her appearance on the show, with many quick to point out Holly’s alcohol consumption.

One fan tweeted: “drunk holly is the best I’ll take a glass of what ever she is having.”

A few hours earlier, Willoughby had been active on her social media account and posted a photo to Instagram of her ‘jungle massive’ hair slides and glamorous evening outfit. Fans noted that the presenter looked emotional after finishing her stint on I’m A Celebrity.

She has won rave reviews for her role as Declan Donnelly’s co-host and was clearly in the mood to celebrate, posting a photo with the caption ‘party time’ which was taken a few hours after she had enjoyed a glass of champagne live on This Morning.

And her drunken appearance with Phillip and Rochelle wasn’t the first time that day that she had been filmed drinking alcohol live on TV. Holly and her co-host Dec had already moved over to Extra Camp and were soon greeted with glasses of bubbly on arrival. 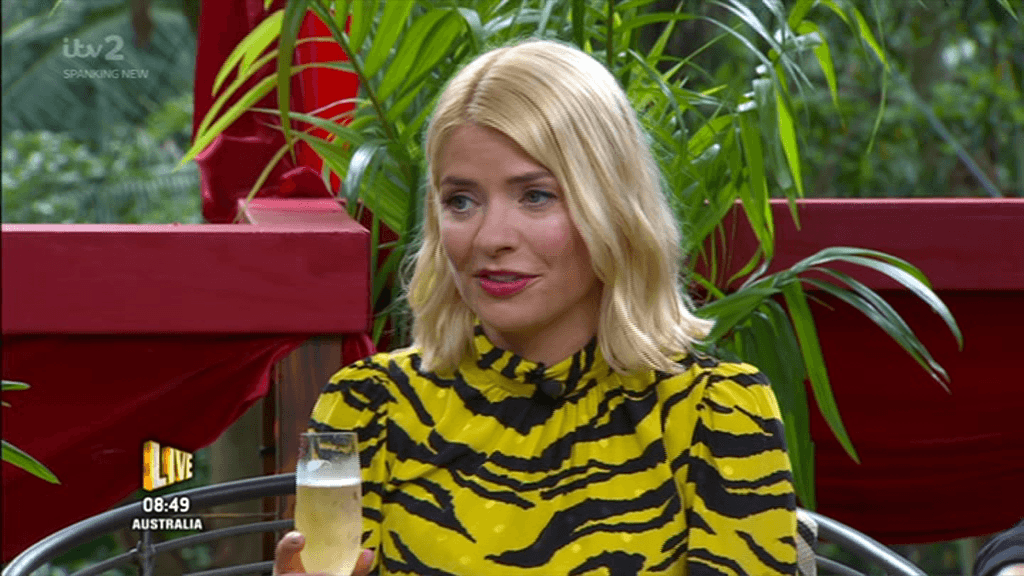 Willoughby might want to crack the champagne open again very soon as it’s been revealed that ITV bosses are desperate for her to return to I’m A Celeb next year.

Holly might not need too much convincing as she has been extremely vocal about how much she’s enjoyed her time on the show. The presenter shared a photo with her children Harry, Belle and Chester alongside another snap with Harry Redknapp and Dec which read:

“Yaaaaaas! So wonderful to be able to crown the man that melted our hearts for the last 3 weeks! Congratulations King Harry…

Yaaaaas! So wonderful to be able to crown the man that melted our hearts for the last 3 weeks! Congratulations King Harry… @imacelebrity it’s been the most wonderful adventure… it’s been a dream… thank you for having me… Jam roly poly’s all round!!!! 🥰 🥰🥰🥰🥰🥰🥰🥰 🥰🥰🥰🥰🥰🥰🥰🥰 Dress @zadigetvoltaire ❤️

“@imacelebrity it’s been the most wonderful adventure… it’s been a dream… thank you for having me… Jam roly poly’s all round!!!!”

Although Ant McPartlin is only stepping away from TV temporarily, ITV bosses want Holly to remain a key part of the show after I’m A Celebrity earned its highest ever viewing figures.

Over 12.6 million people tuned in to see Holly and Dec at the helm of the show.

One source recently revealed: “The original plan was for Holly to stand in while Ant was off and then hand the baton back. But she’s been such a success that producers are now keen to keep her whatever happens.

“Many presenters would have crumbled under the pressure of joining such a big show, but Holly stepped up to the plate. The top people at ITV are now really keen to get her back next year.

“It now depends on whether or not she wants to do another series. Being in Australia for five weeks is a big commitment. She has her family to think about. And she also has her commitments at This Morning to think about.”

Bosses are reportedly set to offer Holly a new deal by March next year.

Did you catch Holly’s appearance on This Morning? Let us know in the comments section below!