John Matuszak is a name that will live forever, thanks to the actor’s unforgettable performance as Sloth in 1985’s beloved The Goonies. Tragically, within four years of that family classic’s release, the ex-NFL player passed away aged just 38, due to an accidental overdose of a since-outlawed prescription painkiller.

After an illustrious sporting career (during which time he was affectionately known as ‘The Tooz’) and with the promise of more great work ahead in film and television, Matuszak’s sad, premature end came after years of heavy drinking and drug use, fuelled by personal demons he never managed to overcome. 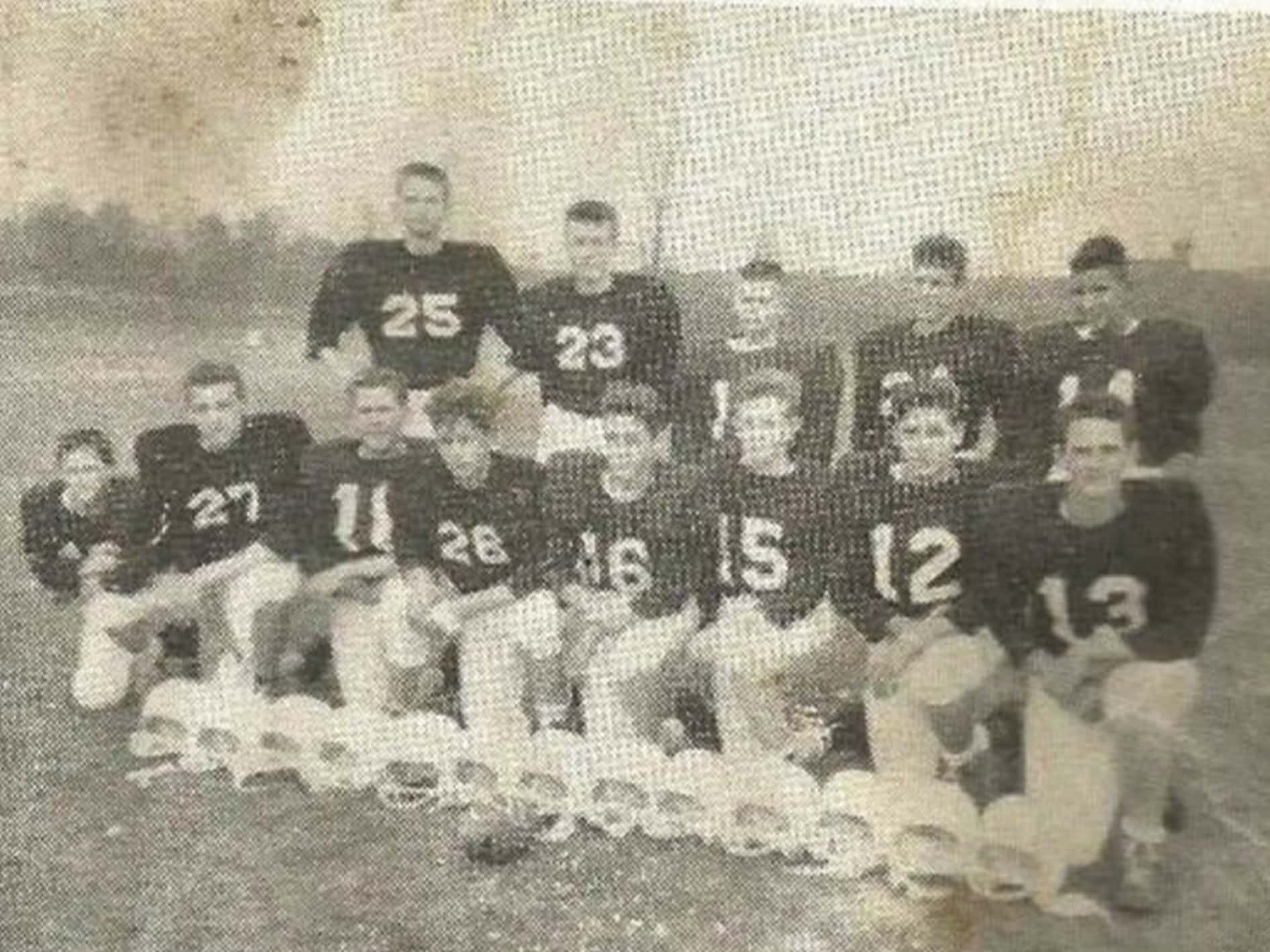 Born on October 25, 1950 in Milwaukee, Wisconsin, John Matuszak knew loss from an early age. John lost two brothers to cystic fibrosis, from which his sister also suffered. A social outcast due to his unusual height (by adulthood, he stood 6’8″ tall), Matuszak endured ridicule at school until he found an outlet in sports.

As well as playing football and basketball, Matuszak also became a Wisconsin state champion in shot put, with a throw of almost 18 metres. Sadly, while this may have impressed Matuszak’s peers and teachers, it apparently meant little to his parents, who took no interest in his sporting activities and rarely came to see him play.

Matuszak’s sporting prowess impacted his social status, which in turn impacted his taste for partying. This caught up with him in a bad way once he made it to the University of Missouri, where he got into a drunken fight and hit the other guy so hard he “broke most of the bones in his face.” 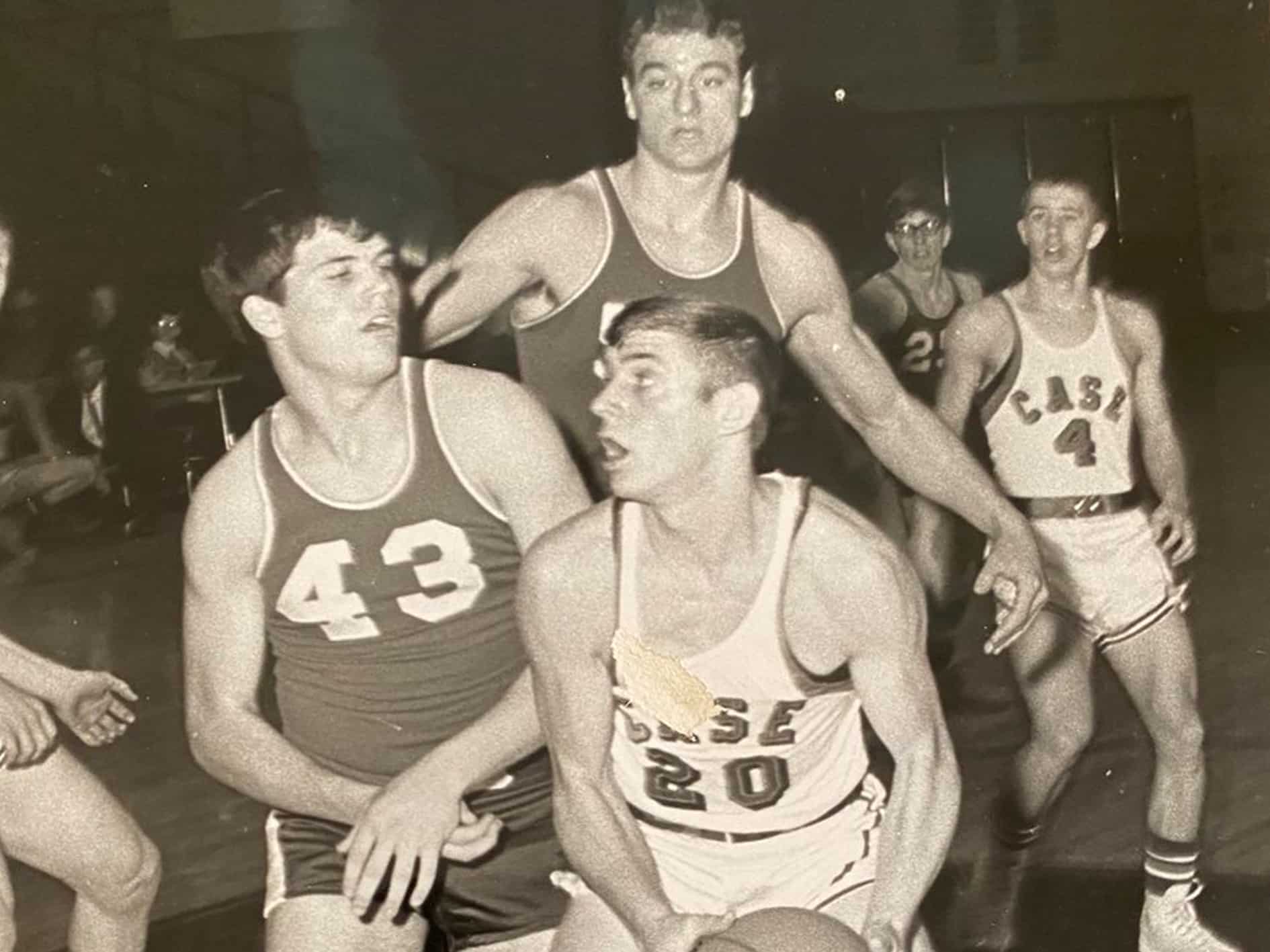 When this incident saw Matuszak suspended from the college football team, he transferred to the University of Tampa, Florida, where he built a reputation as a player with promise. In the National Football League draft of 1973, Matuszak was the very first player picked, and buzz surrounded this hulking 22-year-old immediately: an early profile at the New York Times gushed, “When John Matuszak enters a room, he fills it… he will be the most impressive physical specimen in all of football and he undoubtedly will be the richest rookie lineman ever.”

Even so, Matuszak got off to a rocky start. Starting out with the Houston Oilers, he was soon transferred to the Kansas City Chiefs – but within months he moved once again, to the Washington Redskins. It wasn’t just Matuszak’s gameplay that sparked these moves; there were issues off the field which made him difficult to work with.

Still a young man, the pressure of going pro took its toll on Matuszak, and he took respite in heavy drinking. He also took cocaine, and developed a dependency on prescription medication, once remarking, “painkillers are a way of life in the NFL.” 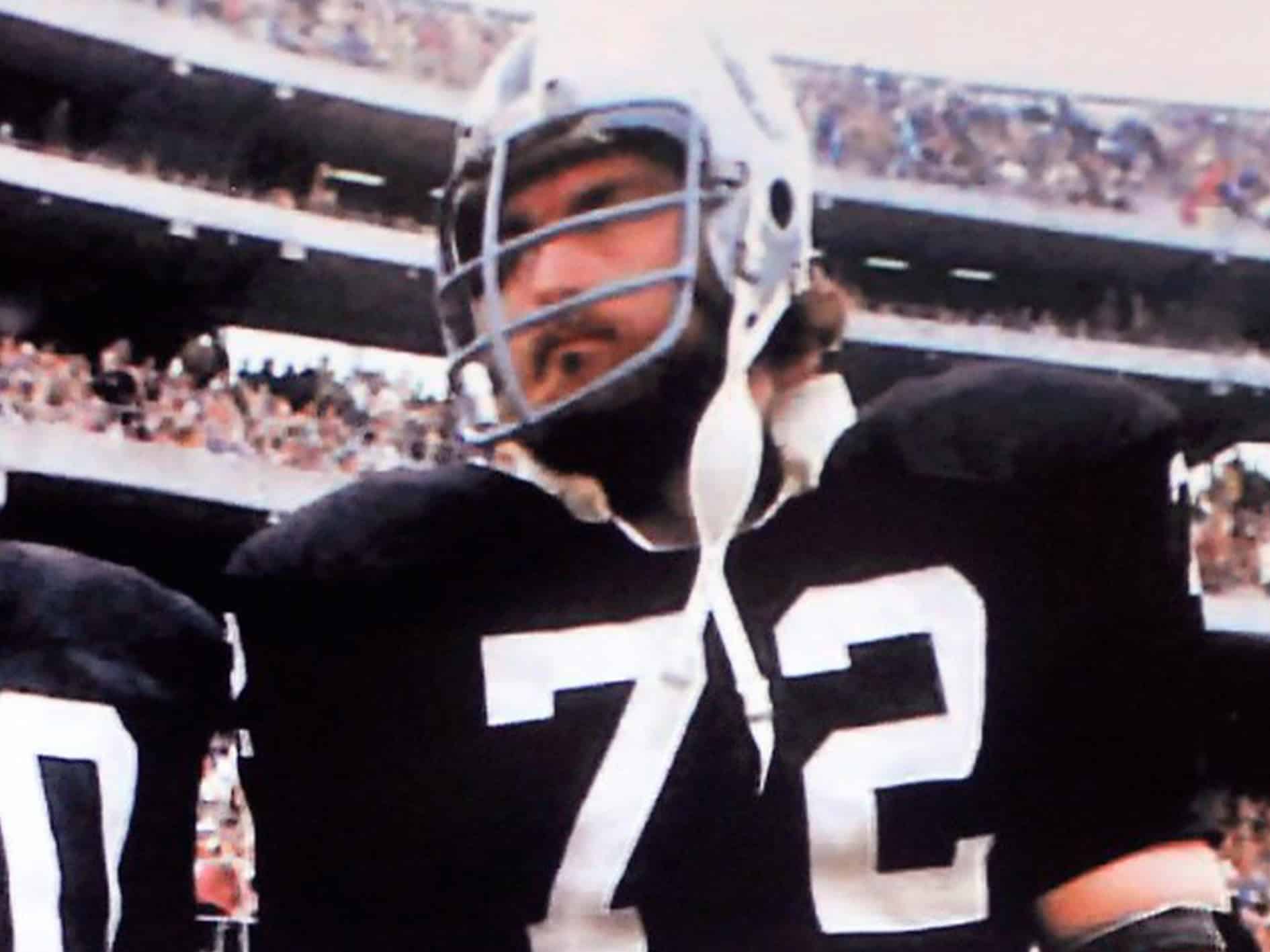 After the Washington Redskins, Matuszak moved on to the Oakland Raiders, a team renowned for bad boy behaviour, both on the field and off. He would remain with the Raiders for the rest of his pro-football career, ending in 1983 (by which time the team had become the Los Angeles Raiders). During this time, the Raiders would enjoy two Superbowl victories.

Matuszak threw himself headfirst into the LA party scene, with drinking, drugs and womanising in abundance. The competitive, macho nature of football meant the players were frequently trying to outdo one another, and the ‘Tooz’ was always determined to go further than everyone else.

Fellow Raider Ken Stabler once remarked, “I don’t know how many times I’ve seen The Tooz walk into a bar, grab his shirt with both hands, rip it open to the waist and growl like a lion at the top of his lungs. That tended to get everyone’s attention.” These exhibitionistic tendencies reached their peak when Matuszak posed naked for Playgirl magazine in 1981. 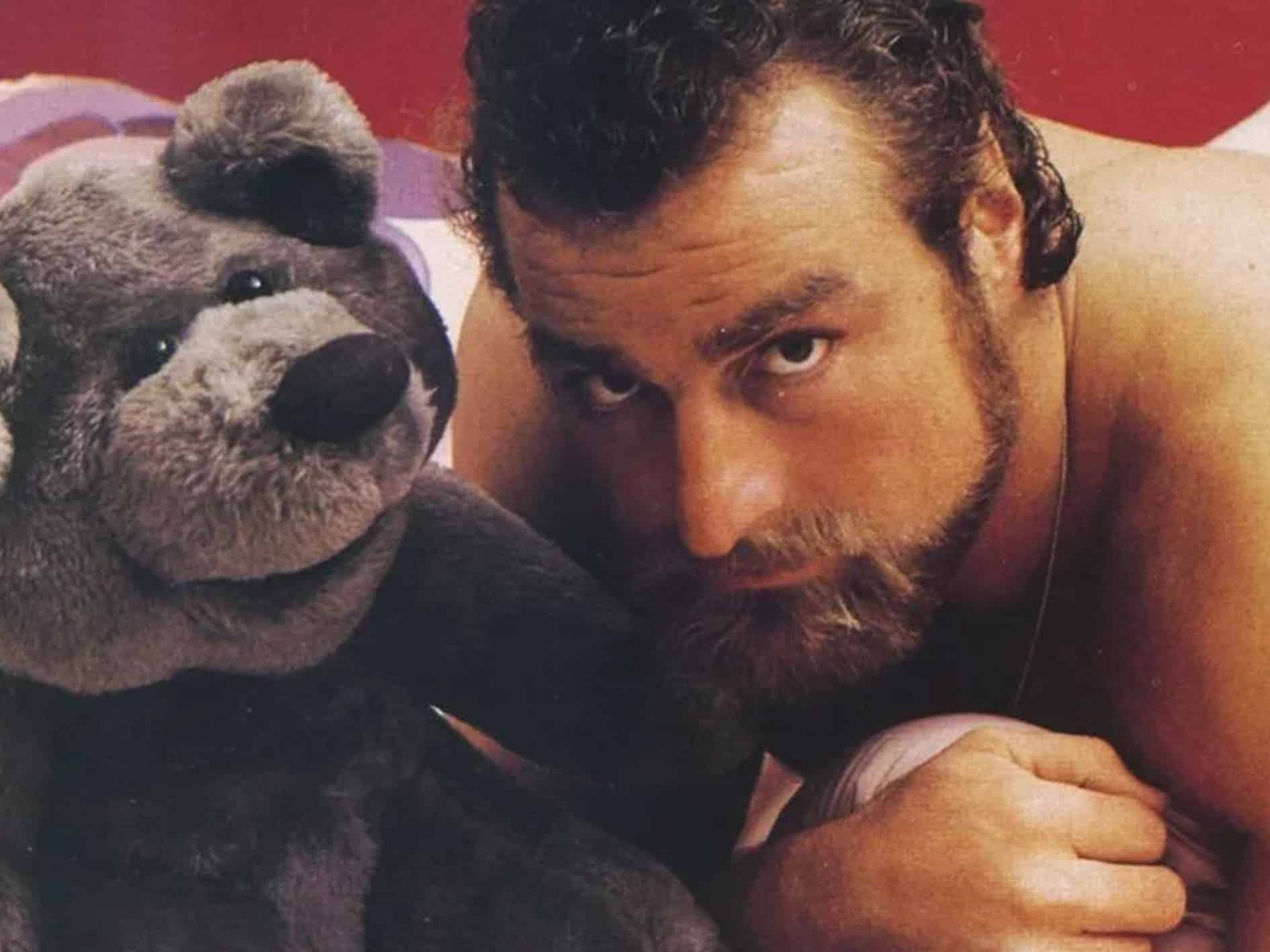 Matuszak’s friend Mike Ornstein said of Matuszak’s wild ways, “John got to the point where he felt he was expected to do it… You’d come in [to practice] the next day and there’d be a Tooz story. He thrived on that. Hey, he made a lot of money on that.” Matt Millen said of his colleague, “Tooz was a decent guy. He was loud, but not always obnoxious. If you saw him with his family, he was just like you and me. It was mostly when he was high. When he was flying, boy, he was the worst. Which was a lot.”

Unsurprisingly, these hard-living ways often saw Matuszak end up on the wrong side of the law. He was arrested many times, on such charges as drunk driving, possession of drugs and carrying a concealed weapon, the latter of which saw him spend several days in jail. A lawsuit was also taken out against Matuszak by two men (one of whom was a male stripper) who alleged that he had beaten them up; the court ultimately ruled in Matuszak’s favour.

Matuszak didn’t behave this way just for the fun of it. His one-time fiancée Stephanie Cozart explained, “The man was in a lot of emotional pain. He had a lot of childhood stuff to deal with. He had a lot of present-day stuff. He was like a book. He was a therapist’s dream.” 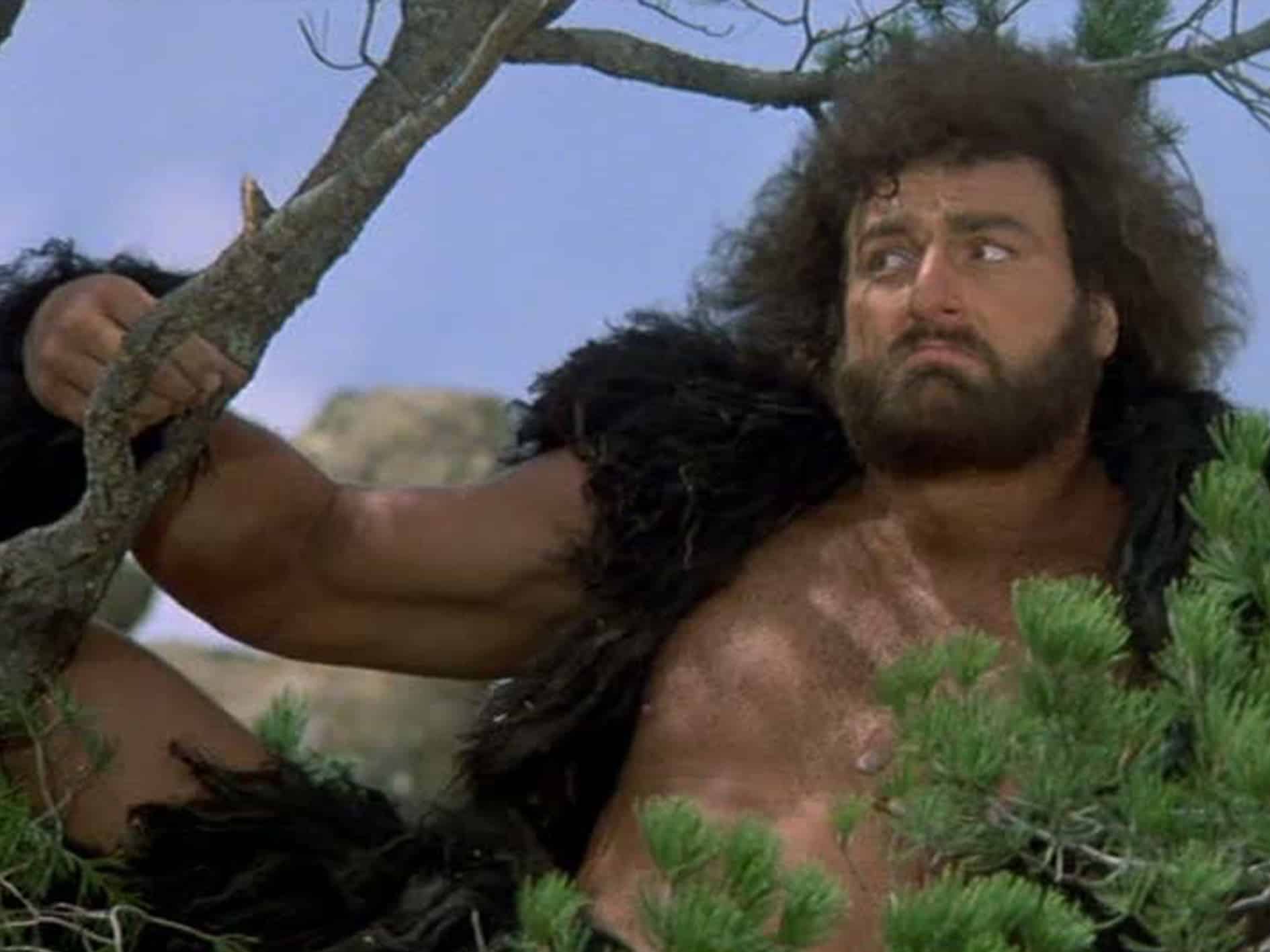 Cozart says that on top of being “very uncomfortable” with his height (“he liked being special but he didn’t like feeling like a circus freak”), Matuszak was also haunted by “his brothers’ deaths. Why did he survive and they didn’t? And pressure. Now I’m the only son. I’m the one who has to carry on the name. Everything depends on me. I’m the only one in the family who’s a celebrity and the biggest breadwinner… he felt everything was on his back.”

Given his wild, X-rated reputation, it might seem ironic that, today, Matuszak is best known for appearing in a movie for kids – yet he always had a softer side, especially when it came to children. At the height of his football fame, he dressed as Santa for a children’s hospital, and helped out at a football summer camp run by his one-time teammate Mickey Marvin.

Marvin said of Matuszak, “You can tell a lot about a man by how he deals with children. That camp might as well have been the John Matuszak football camp instead of the Mickey Marvin football camp. He was so precious with those kids. They were just hanging all over this big giant of a man. But he wasn’t just a big man physically, he had a big heart.” 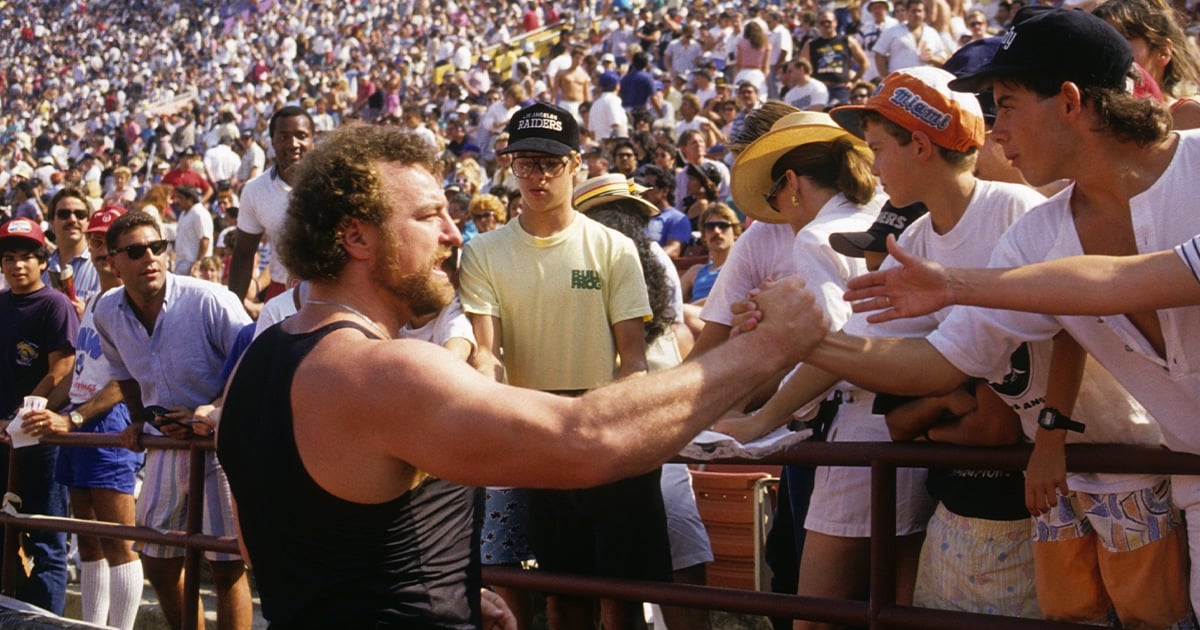 Ornstein recalled, “He was a very, very good person and he had a great heart for kids. There was a kid, I remember, who had cancer. He gave him his jersey, gave him his helmet, gave him everything he had. He went to visit that kid, like 25 days in a row at Children’s Hospital. He did stuff like that.”

Following a series of injuries, Matuszak decided to quit football in 1983, and – having already taken a number of film and TV bit parts – he set his sights on a full-time acting career. Several small roles later, Matuszak was cast as Sloth, the physically deformed yet kind-hearted youngest son of the villainous Mama Fratelli (Anne Ramsey) in The Goonies. The role allowed Matuszak to show his playful, sensitive side, even whilst utilising his size and strength.

Chunk actor Jeff Cohen shared most of Matuszak’s scenes, and recalls being taken by surprise by his hulking co-star. “In the scene where Sloth picks me up while I’m strapped to a chair, I was told he wasn’t going to pick me up because John Matuszak’s back hurt. But of course John was so strong it was nothing to him, so he just picked me up and kissed me. My shock and horror was real. I wasn’t that good an actor – that was actual terror on my face.” The Goonies proved a huge hit, and Sloth became a beloved character, yet (perhaps in part because the makeup rendered him unrecognisable) the role didn’t necessarily transform Matuszak’s career. Plenty of film and TV roles followed, but they tended to be bit parts that cast him as bullies or henchmen. At the same time, the party animal made efforts to amend his ways, attending rehab and joining Alcoholics Anonymous and Cocaine Anonymous. Sadly, none of this did the trick.

On the morning of June 17, 1989, Matuszak’s girlfriend at the time Rachel Toni was unable to wake him, and after being rushed to hospital he passed away that evening. Traces of cocaine and alcohol were found in his system, but the cause of death was ruled an accidental overdose of Darvocet. (An opioid-based painkiller, Darvocet would eventually be banned in 2010.)

Raiders team owner Al Davis declared at Matuszak’s funeral, “in the Raider Hall of Fame and in the hearts of the Raider family, his name is enshrined and will live on in perpetuity for his great contributions to the greatness of the Raiders.” To many millions more, Matuszak will always be remembered as gentle giant Sloth.