Gary Busey Motorcycle Accident “Turned His Personality Up To 11”

Gary Busey has long been considered one of the most eccentric actors of his generation. Thanks to larger-than-life turns in such hits as Point Break and Under Siege, not to mention all manner of bizarre behaviour off-screen, Busey is generally thought of as a quirky character, often assumed to be a result of decades of excessive Hollywood living.

In truth, there’s more to Busey’s outlandish personality than Hollywood eccentricity. In 1988, the actor underwent significant changes in a motorcycle accident that came close to ending his life. While he recovered from his physical injuries, Busey suffered permanent brain damage. Says Busey’s actor son Jake Busey on the state of his father’s mind after the crash, “the post-accident version of him turned his personality up to 11.” 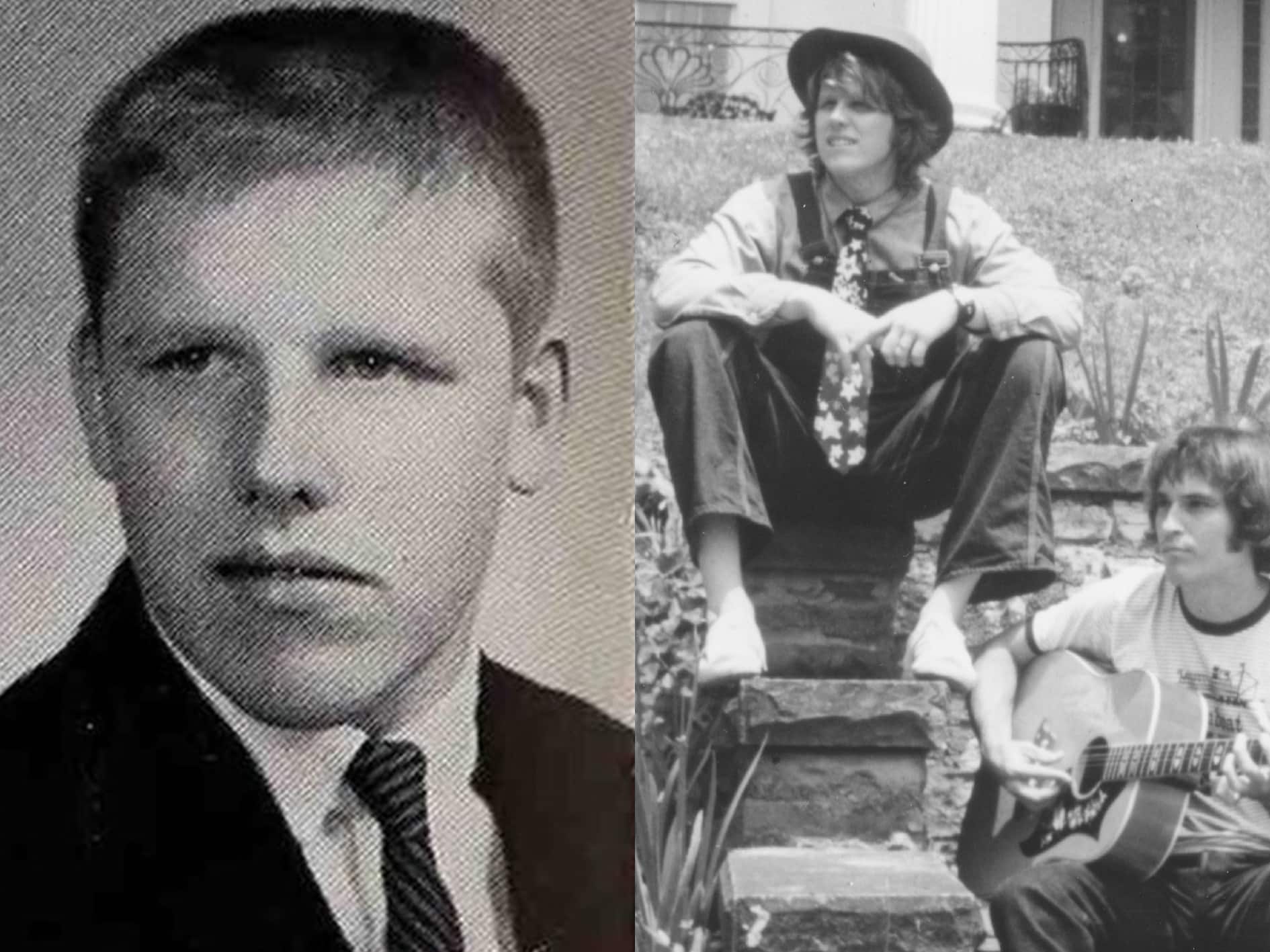 Born William Gary Busey in Goose Creek, Texas on June 29, 1944, acting wasn’t always the future Lethal Weapon star’s goal. Though Busey studied theatre at Oklahoma State University, he wound up dropping out to pursue music. A drummer and guitarist, he moved out to California in the hopes of hitting the big time, but his groups The Rubber Band and Carp never quite made it.

Once in Los Angeles, the young Busey decided to try his luck as an actor to make ends meet. After scores of bit parts in the late 60s, Busey started breaking through into bigger movies in the early 70s, notably acting alongside Jeff Bridges in The Last American Hero and Thunderbolt and Lightfoot. The two would become good friends; Bridges refers to Busey as “my brother”. 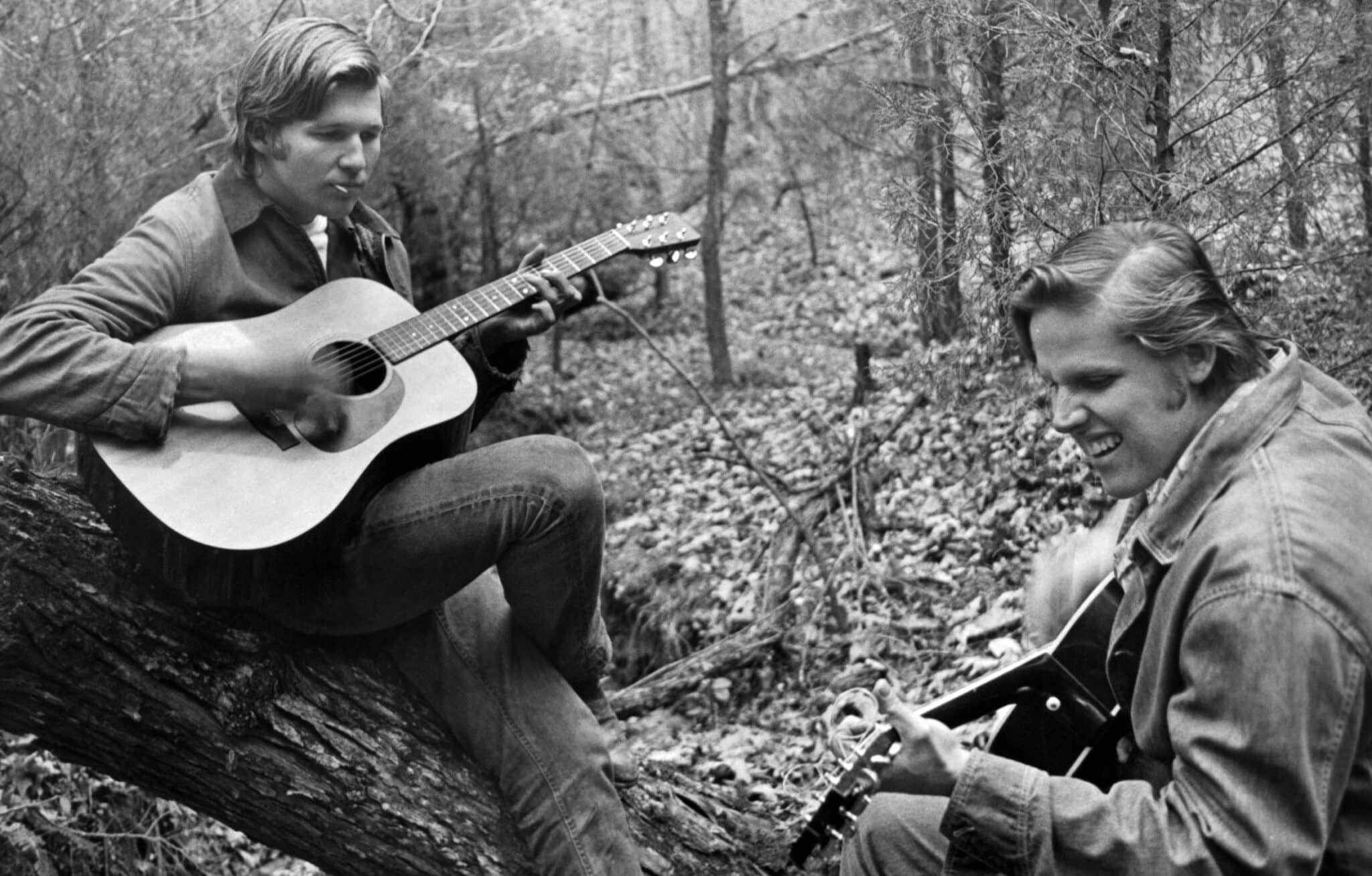 Further scene-stealing roles followed in 1976’s A Star is Born, which cast Busey alongside Barbra Streisand and Kris Kristofferson, and the 1978 surfing drama Big Wednesday.

Busey’s star rose higher than ever before, however, when he took the title role in 1978 musical biopic The Buddy Holly Story. The actor’s performance as the tragic musical legend won him enthusiastic reviews and saw him nominated for the Best Actor Oscar. (He lost out to Jon Voight for Coming Home.) 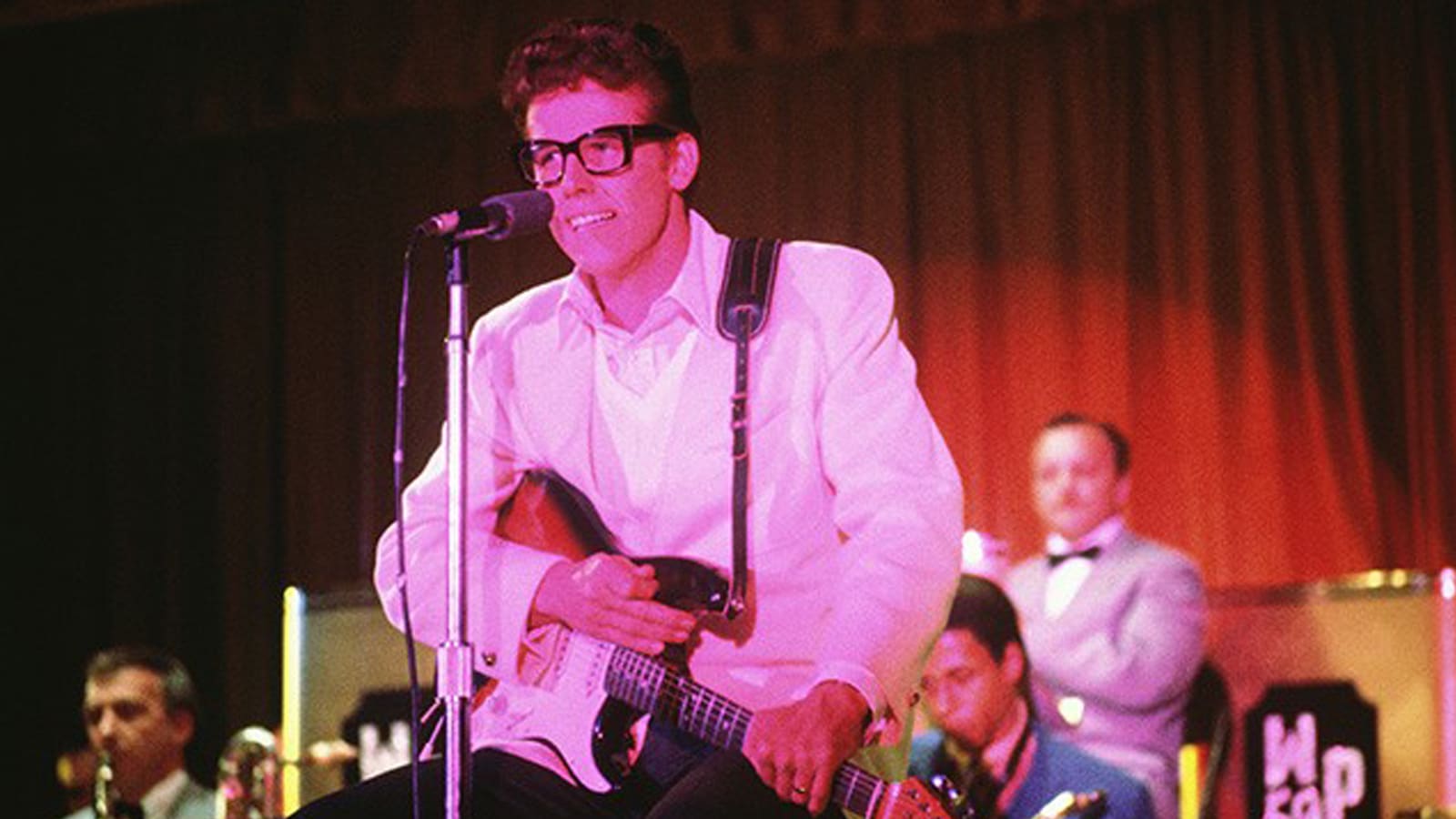 “The hardest-partying guy in town”

Busey continued to work steadily throughout the 80s, famously appearing as the villainous Mr Joshua in 1987 action classic Lethal Weapon. However, the actor dedicated much of the decade to partying, particularly with his good friend and lookalike Nick Nolte.

Busey says he and Nolte at one time “were like two perfectly twin-cloned entities. We’d go to parties in Malibu and were always the last to leave… we got known as ‘the things who will not leave’.” According to Jake Busey, “our house in Malibu was home of the afterparty,” whilst his father was “the hardest-partying guy in town.”

As well as Nolte, the Busey family were also accustomed to visits from musical stars such as Willie Nelson and the members of Fleetwood Mac. For a time, Gary again pursued his music interests and allowing his acting career to slow, something that Jake says “was frustrating for my mom and me.” 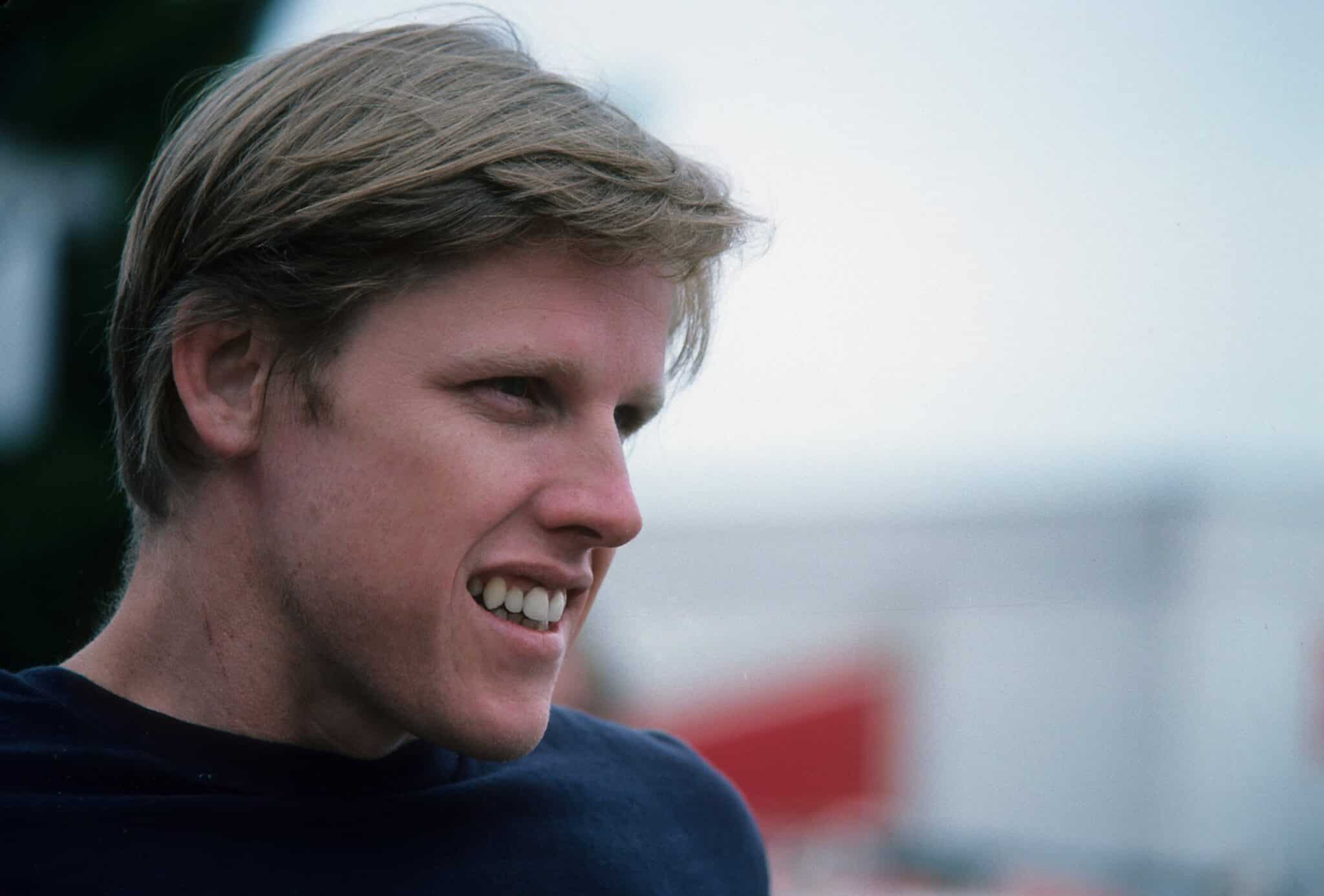 Then, in 1988, Gary suffered a terrible accident. On December 4 at 11:40am, the actor crashed whilst riding his Harley Davidson motorcycle without a helmet on the streets of LA. According to the attending police officer, “[Busey] was thrown off, and the back of his head struck the curb.” (In a tragic irony, Busey had not long since opposed plans to make helmet use mandatory by law; after the accident, he would campaign in their favour).

Busey later explained to David Letterman, “I hit the concrete going 45 miles per hour… I hit a little sand and gravel, fish-tailed, hit my rear brake, and I smashed into the concrete, and I don’t remember seven weeks of my life. I was in the hospital for two months… I’d split my skull, scraped the temple side of my brain.” 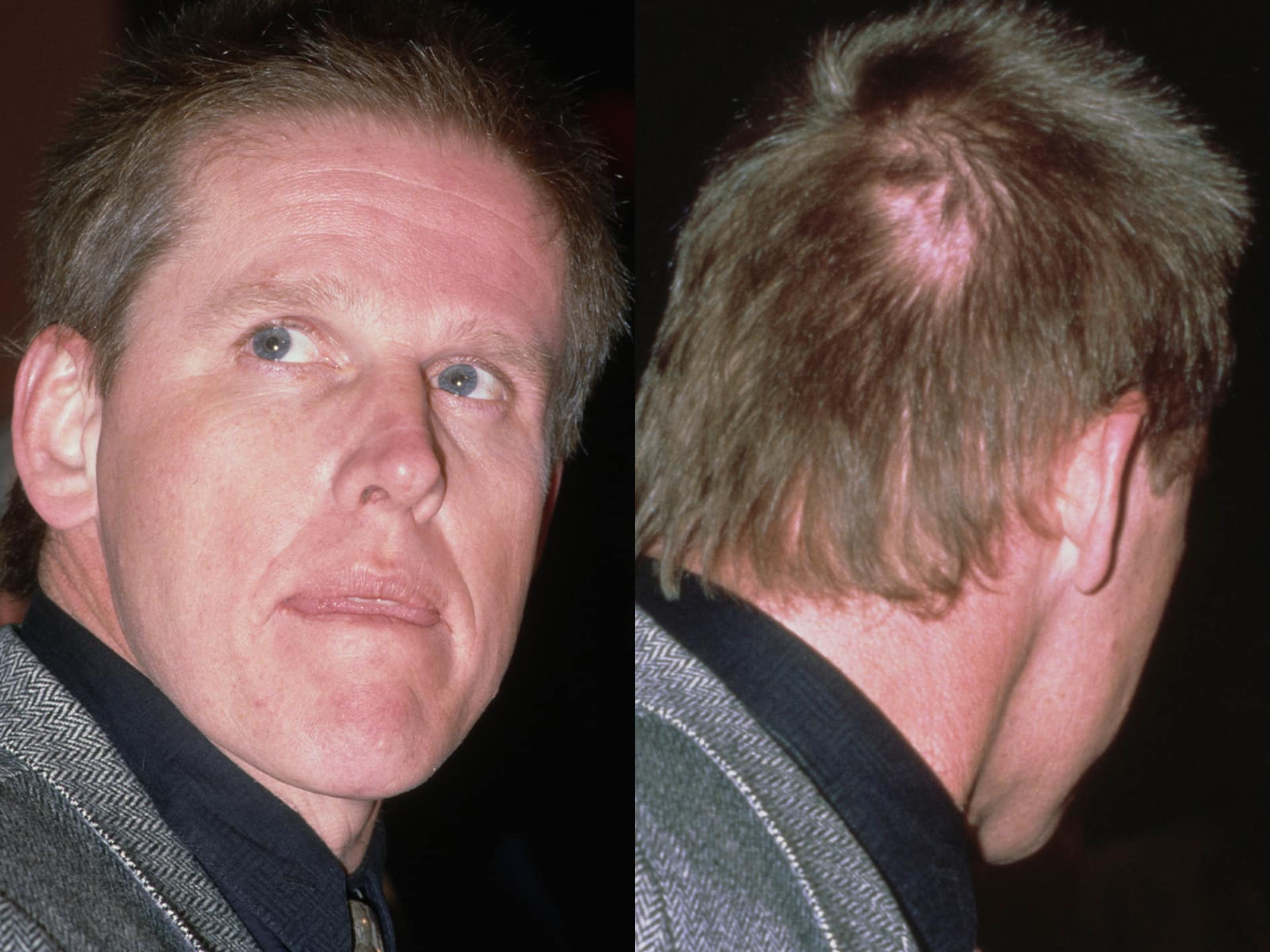 The actor went on to explain, “they gave me 48 hours to live, a 98% chance to die, and they said ‘in 72 hours, if he’s alive he’ll be a vegetable or a left-sided paraplegic.’ And they don’t know how I got back to normal, and I don’t know either.”

Busey may have recovered from his injuries, but it was still a bumpy road. Jake Busey recalls, “He was a vegetable in a wheelchair staring at the wall. At 17, I had to teach him with my mom to talk, to eat, to feed himself. To walk again. To write. That was very difficult for me at that age.” 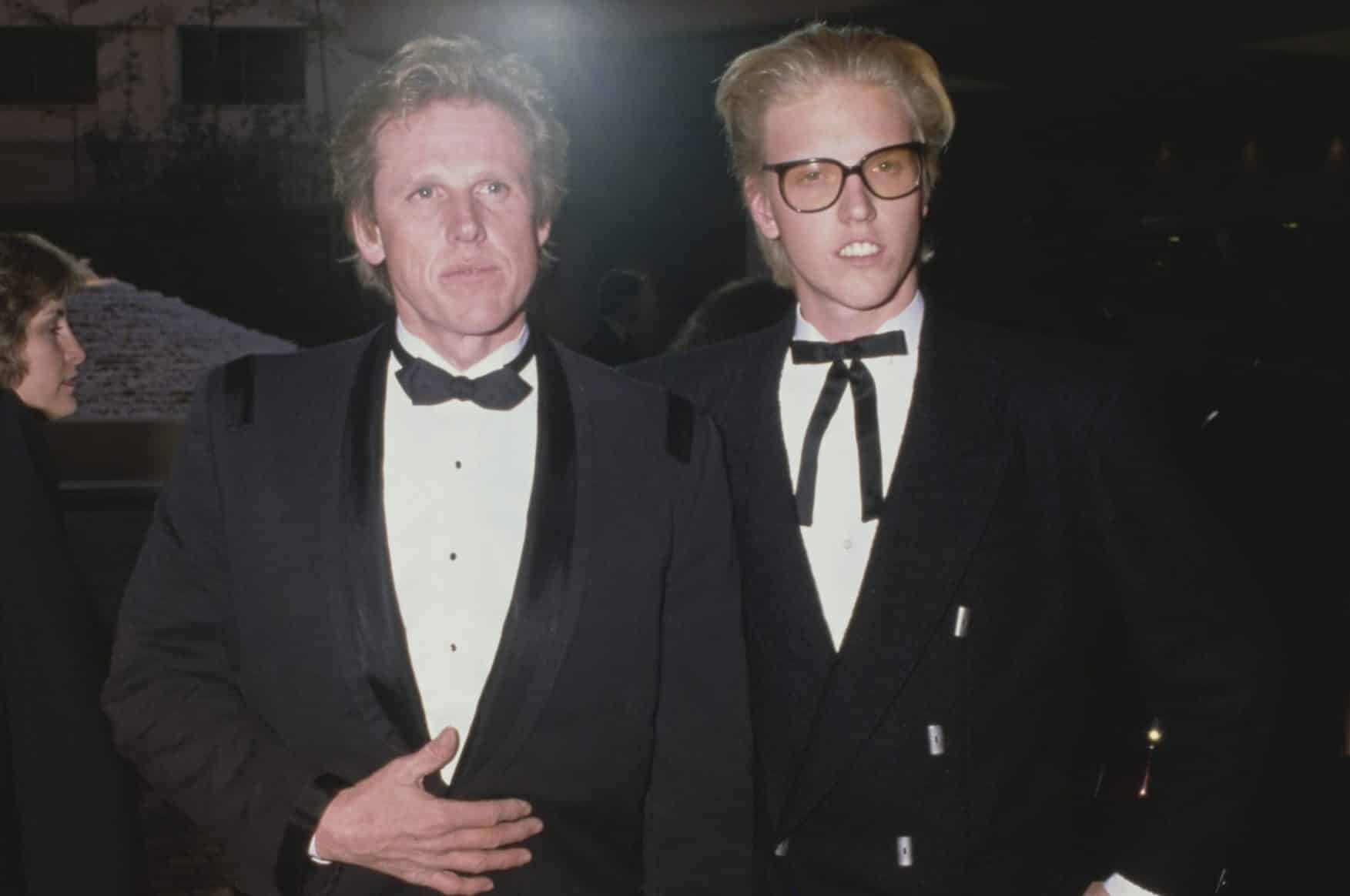 While he did indeed get back on his feet, Busey was left with permanent damage to his frontal lobe. As a result, his personality would never be the same. Though Busey had always been excitable and more than a little quirky, his crash injuries left him with almost no filter, which goes some way to explain his more outlandish performances in the years since, both on-camera and off.

Busey’s own recollections of the accident and his recovery include some eyebrow-raising claims of near-death experience. He told The Guardian in 2020, “[I] passed away after brain surgery and went to the other side – the spiritual realm where I got information… I was surrounded by angels. Balls of light floating all around me. And I felt trust, love, protection and happiness like you cannot feel on earth.” 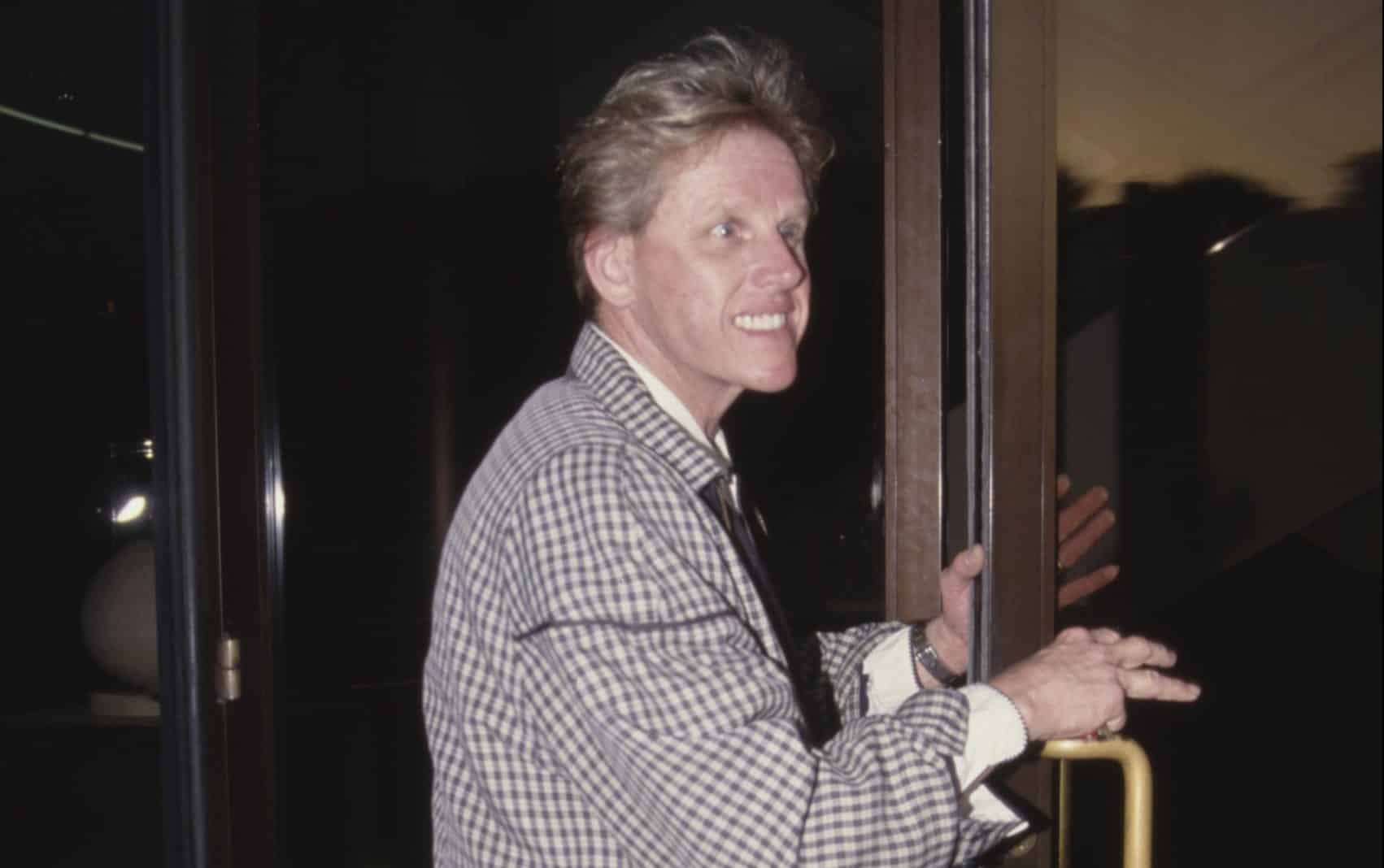 The actor insists, “I don’t have brain damage; I have a brain disordered in a better direction because of how it happened and how it recovered. Oh, boy!” However, his son Jake says the accident left his father struggling with delusions, severe mood swings and a volatile temper.

This, it seems, took its toll on his relationship with Jake’s mother Judy Helkenberg; they divorced in 1990, after 22 years of marriage. He went on to have a relationship with actress and stunt performer Tracy Hutchinson, with whom he fathered a daughter, Alectra Busey. 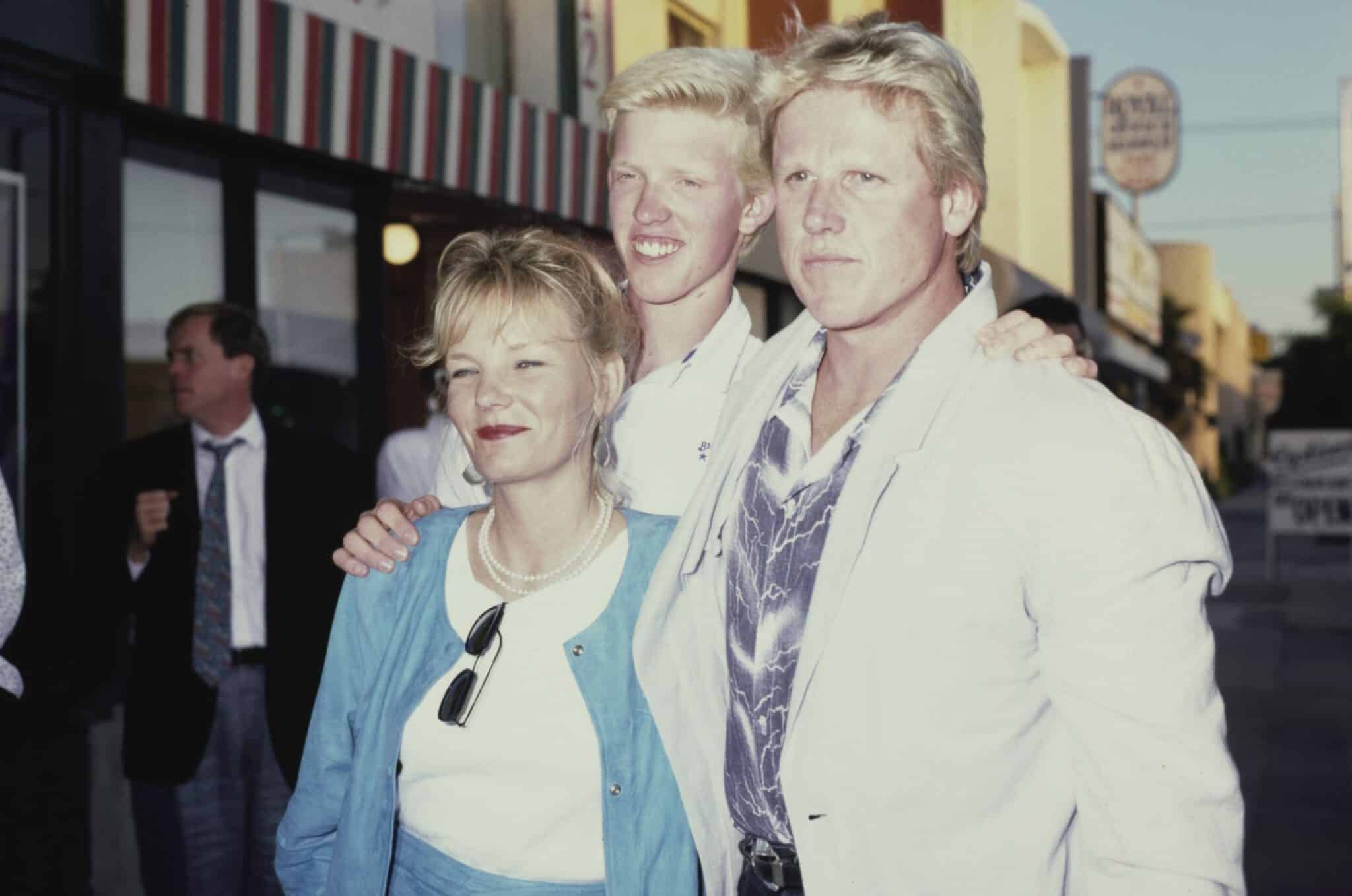 Things only got harder for Busey from there. Following his recovery from the accident, Busey developed an increasing dependency on cocaine. The star had been known to use the drug in earlier years, although not long before the accident he had claimed to have been off drugs since 1985. (There is no indication that he was under the influence at the time of the crash.)

In 1995, Busey suffered a near-fatal cocaine overdose which resulted in his arrest on multiple counts of possession and being under the influence. The actor has insisted he stopped using the drug at that point, although many years later Dr Drew Pinsky, who worked with Busey on TV’s Celebrity Rehab in 2008, claimed Busey had relapsed. 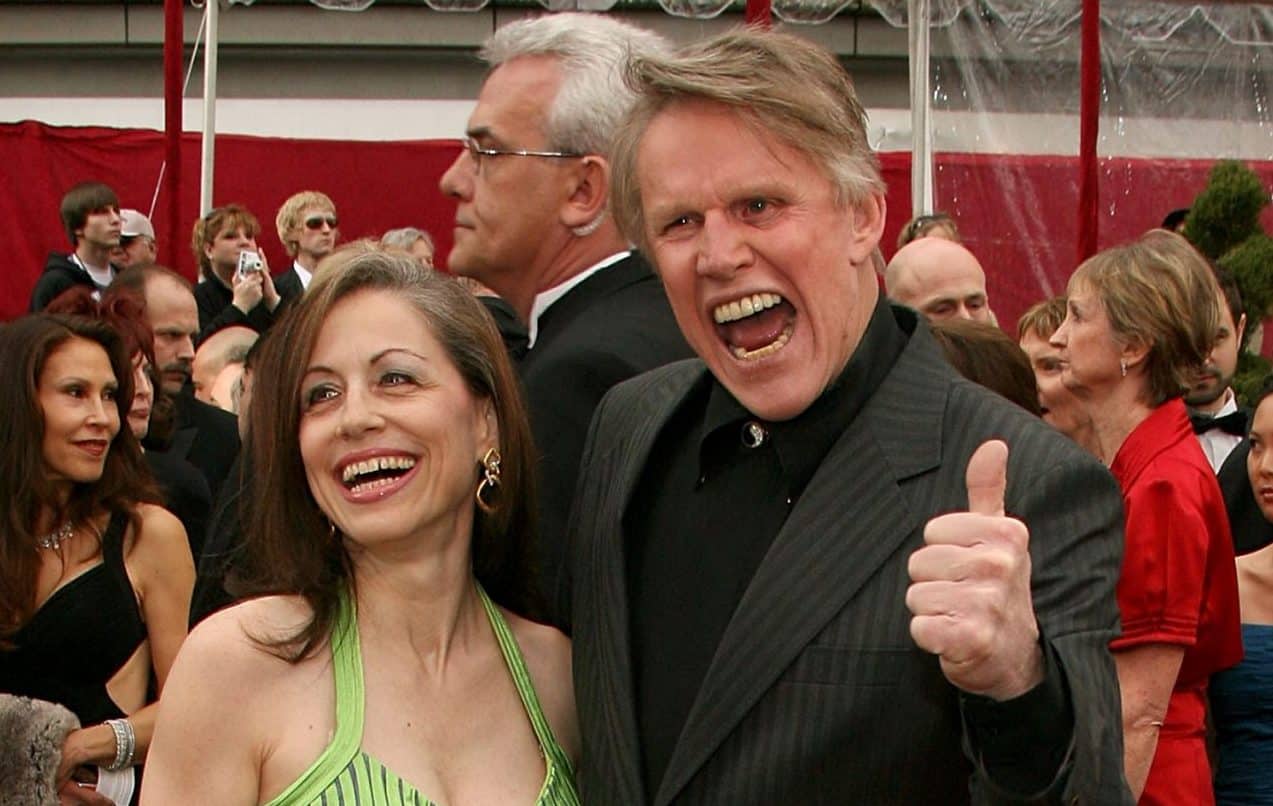 Tragically, Busey’s second wife Tiana Warden would also overdose on cocaine in November 2019, but did not survive. Busey and Warden were married from 1996 to 2001, and their marriage was troubled. In 1999 Busey was arrested on charges of spousal abuse, then faced further charges after arriving 40 minutes late to a court hearing.

Medical issues also took a toll on Busey. In 1997, Busey was forced to undergo more serious brain surgery when a cancerous tumour “as big as a golf ball” was found in his sinus cavity. (“Ironically, after years of cocaine use, it was unrelated”, Busey explained later.)

At the time it would have been acceptable medical practice to remove Busey’s eye and nose in order to reach the tumour, but luckily a new surgical technique involving a small camera and micro instrumentation saved Busey from becoming “permanently disfigured”. Still, the operation saw the removal of both Busey’s sinuses and his tear ducts. The surgery left Busey’s face with a lopsided appearance, with his left eye left noticeably redder and wider than his right. 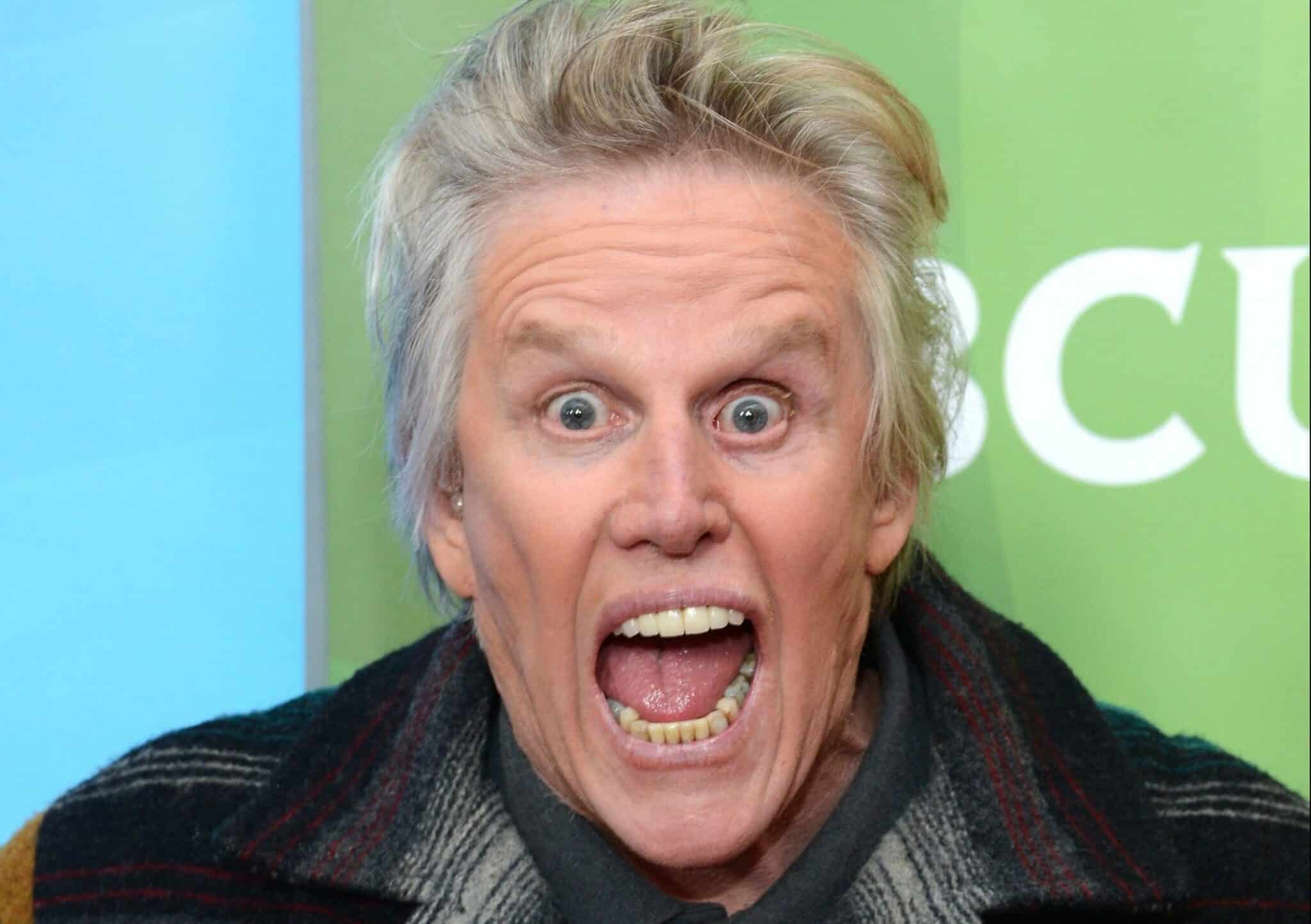 Busey has also admitted in his memoir Buseyisms that, in the wake of his cancer treatment, he was left deeply insecure about his appearance: “I didn’t recognise myself… The man in my reflection was a stranger with a crooked face.” For this reason, Busey underwent plastic surgery to his face in 1998, and was satisfied with the results: “I looked like me again.”

Busey’s reputation as a crazy man gradually soured Hollywood on the actor. Soon the major movie offers dried up, and he struggled to stay afloat financially; in 2012 Busey filed for bankruptcy with debts close to $1 million.

For many years now, Busey has had to get by with roles in B-grade productions like The Gingerdead Man and the Sharknado movies, plus a string of reality TV appearances (he won Britain’s Celebrity Big Brother in 2014).

Twice divorced, Gary Busey has been in a relationship with actress Steffanie Sampson since 2008. They have a child together, Luke, and Jake Busey credits Sampson for looking after his father, remarking “If it wasn’t for her, he’d be in an old folks home.” 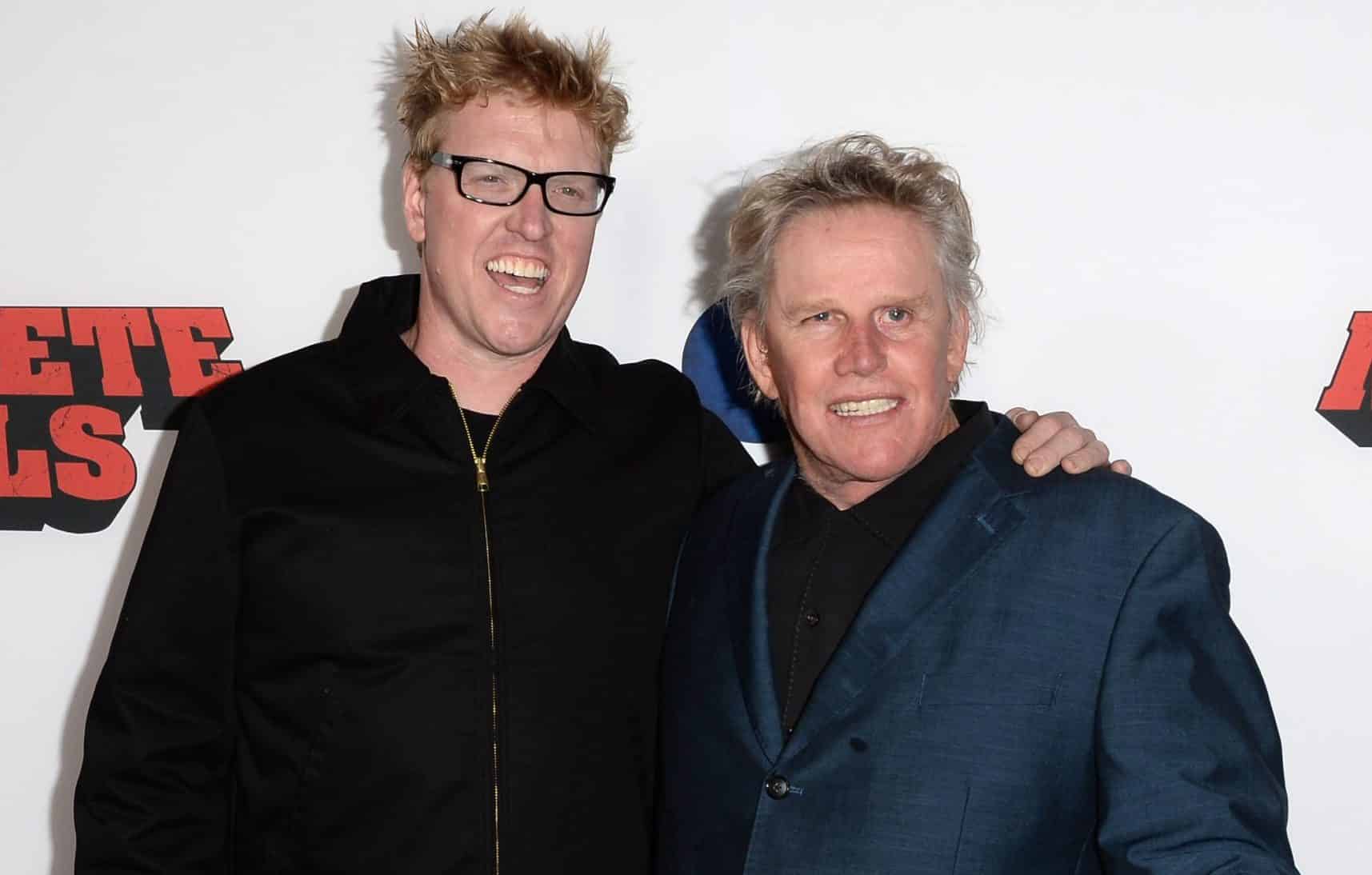 Still, Jake admits his father’s madman reputation can be hard to take. Remarking “I feel like I lost my dad on December 4, 1988,” he also maligns “the fact that there’s an entire generation of people who don’t know the man he was before the accident – this incredibly talented actor, this force of nature.”

Jake also admits his own career has had difficulties because of his father: “The same Busey name that helped me 30 years ago has become a scorpion’s tail because it’s associated with insanity.”