Back in the 90s, two of the most popular shows on television (albeit at rather different ends of the entertainment spectrum) were Friends and Baywatch. There was never an official Friends/Baywatch crossover – although the sitcom did have a few crossovers with other shows of the era – but Baywatch certainly made its presence felt in Friends.

In season two, Chandler develops an infatuation with one of the lifeguard drama’s leading ladies, Yasmine Bleeth. Bleeth never appeared on Friends outside of Chandler and Joey’s television, but this little obsession gained a special resonance given that Chandler actor Matthew Perry actually wound up dating Bleeth for real. 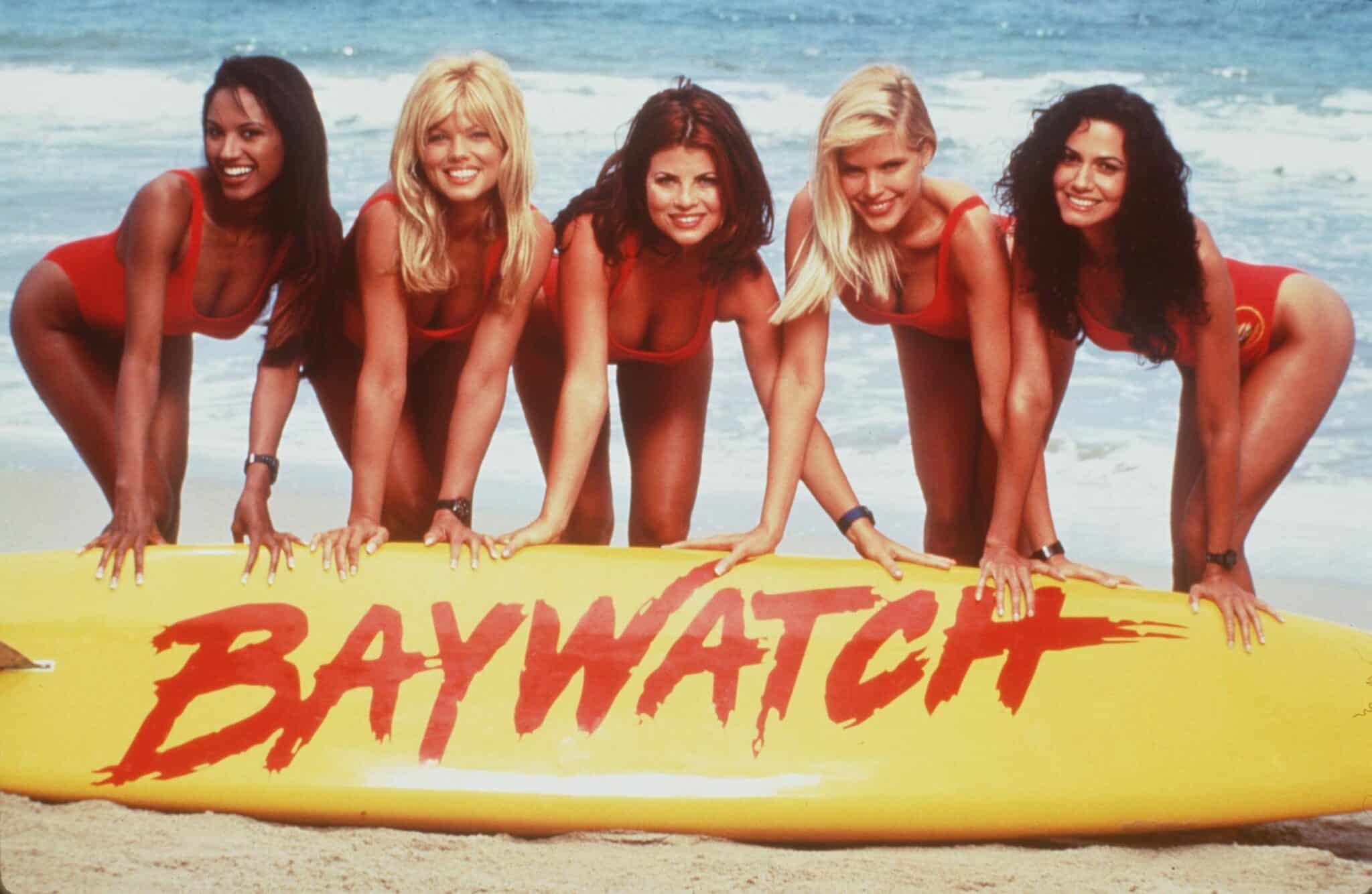 The first of these was Erika Eleniak, to be followed by the likes of Pamela Anderson, Nicole Eggert, Gena Lee Nolin, Carmen Electra and many more. Yasmine Bleeth then joined Baywatch in 1993, as Caroline Holden, sister of Alexandra Paul’s Stephanie.

Bleeth immediately caught the attention of millions thanks to her striking good looks, which saw her listed among People Magazine’s most beautiful people, as well as being voted one of the world’s sexiest women several years in a row by the readers of FHM. 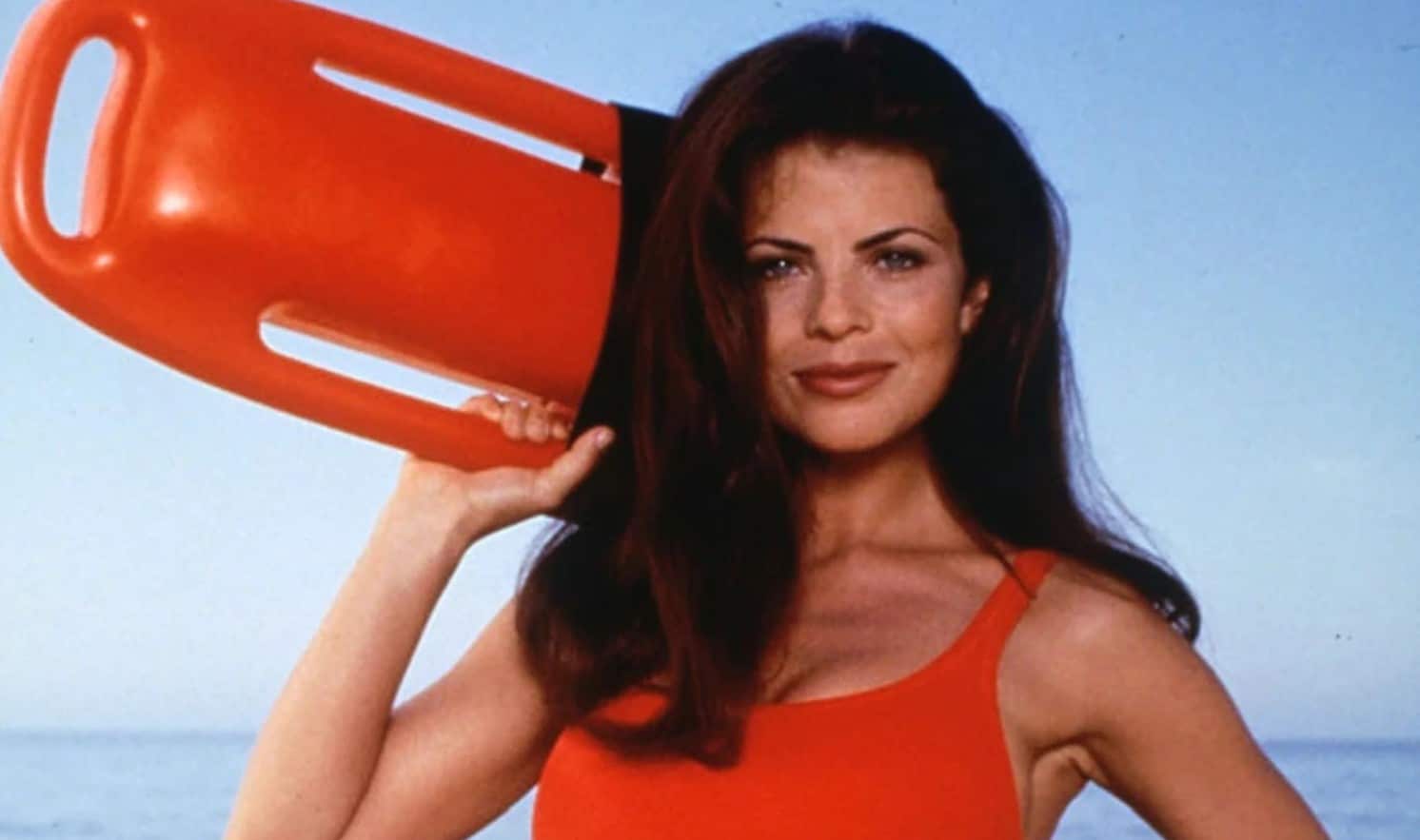 Bleeth had already been on Baywatch for a year when Friends premiered in September 1994. The New York-set sitcom surpassed all expectations to become one of the biggest TV hits of the decade, popular not just with audiences but also with critics – a marked contrast to Baywatch, which most reviews dismissed as shallow and voyeuristic.

The shows first overlapped with the 17th episode of Friends season 2, The One Where Eddie Moves In, first broadcast February 22, 1996. In this episode, Joey (Matt LeBlanc) has moved into an apartment of his own, leaving Chandler temporarily alone. However, the two continue to bond over the phone – most notably when Baywatch comes on TV. 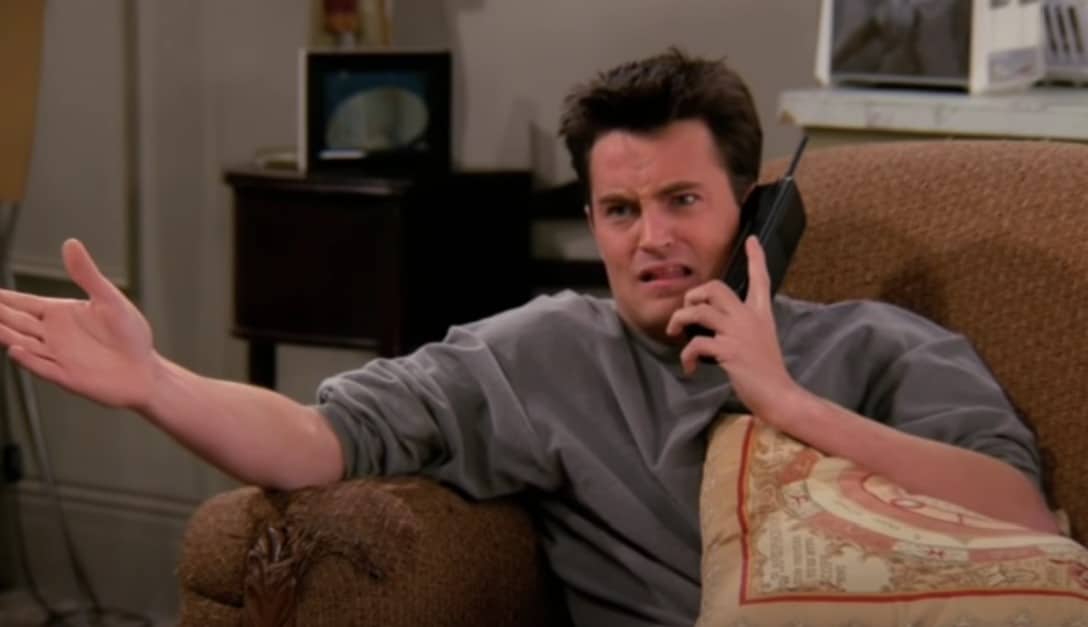 This episode didn’t mark the end of Chandler’s fixation. In season 3, episode 5 (The One With Frank Jr.) Chandler starts a conversation about ‘freebie’ lists – a list of five celebrities your partner would agree to let you sleep with – and naturally his list includes Yasmine Bleeth.

Later in season 3, episode 21 (The One With A Chick and A Duck) Joey and Chandler adopt a chick and a duck as pets – and what else should Chandler choose to name the chick but Yasmine. 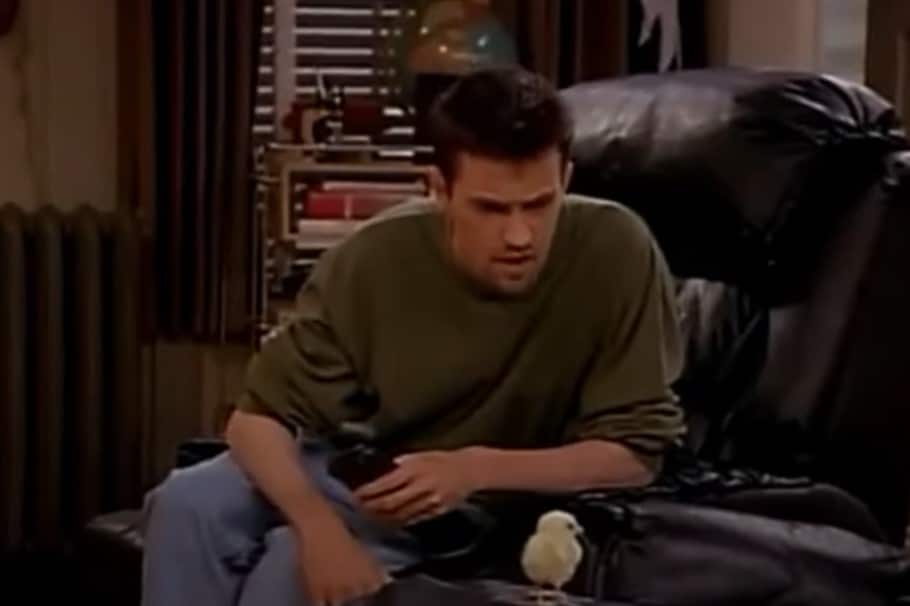 One scene sees Chandler sat watching Baywatch with his chick, casually informing the bird, “that’s Yasmine Bleeth. She’s a completely different kind of chick. I love you both, but in very different ways.”

Matthew Perry is known to have been the only Friends cast member to be involved in writing sessions on the sitcom, and a lot of Chandler’s signature quirks came straight from the actor himself. As such, it’s entirely likely that Perry himself was responsible for Chandler’s fixation on Bleeth, all the more likely given Perry dated Bleeth in real life. 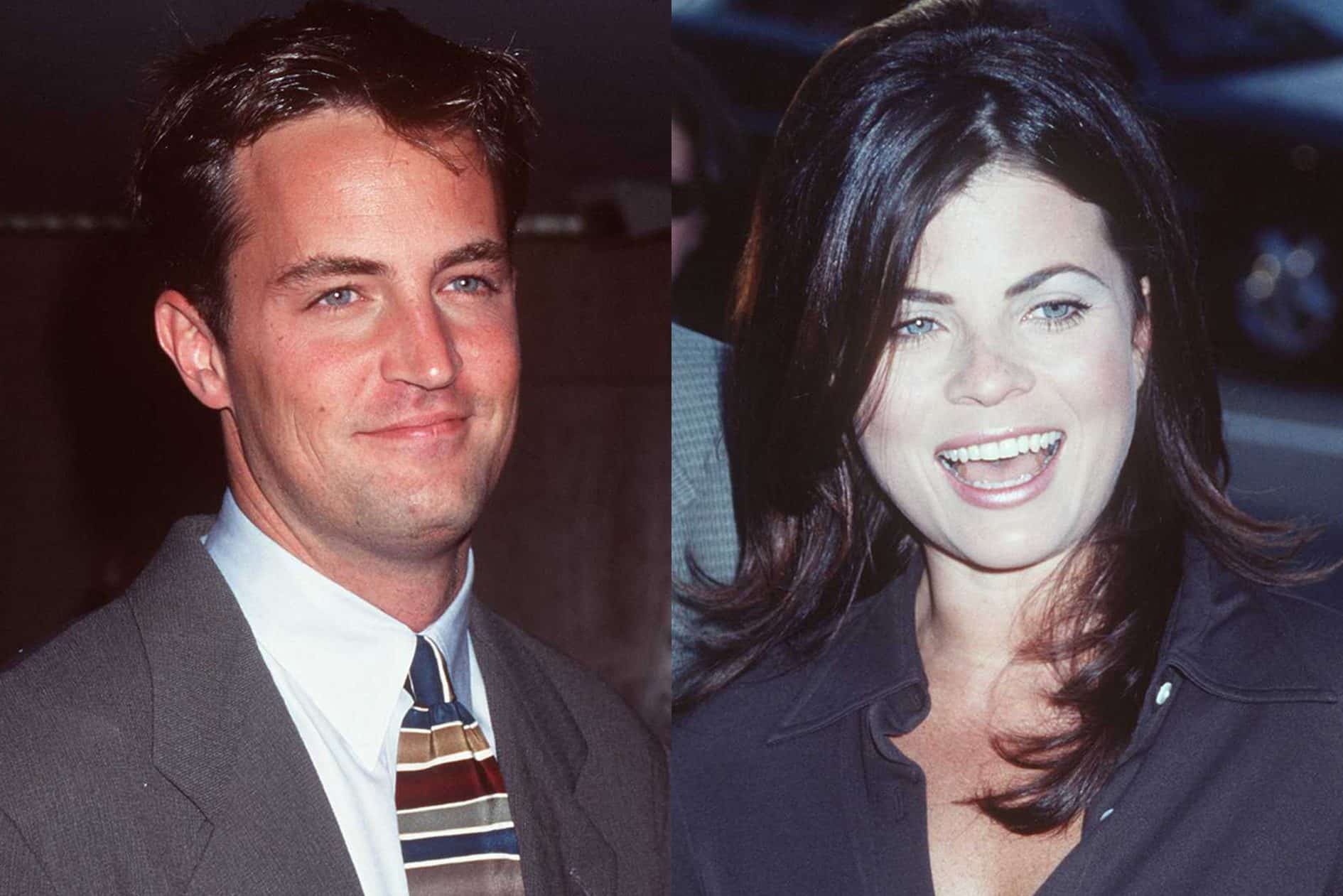 It’s been reported that Perry and Bleeth were seeing each other at some point in late 1996 into 1997, shortly after Perry ended a brief relationship with another, even more famous actress: Julia Roberts, who he dated following her guest appearance on Friends in January of 1996.

In another fun connection, Bleeth appeared in the music video for This House is Not a Home by The Rembrandts, the band who enjoyed a considerably bigger hit with earlier single I’ll Be There for You, the Friends theme song. 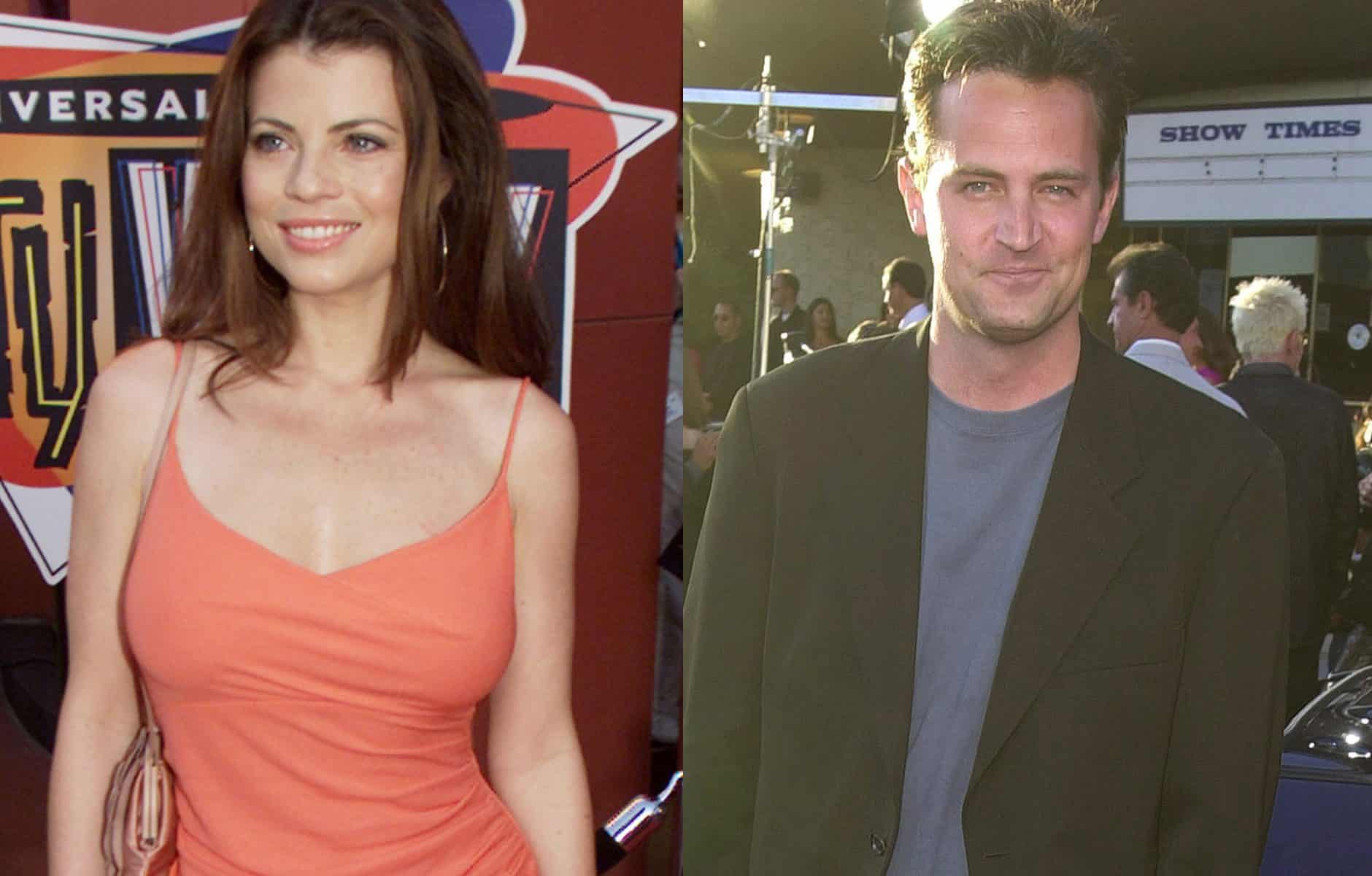 It’s not clear whether Perry and Bleeth began seeing each other before or after Chandler was revealed to be obsessed with the actress. In any case, the romance was said to have been short-lived, with the couple only staying together for a few months.

Bleeth would go on to marry strip club owner Paul Cerrito in 2002; she retired from acting following a drugs-related conviction and a struggle with addiction. Perry, meanwhile, continues to act, and has dated actress Lizzy Caplan and talent manager Molly Hurwitz, but has never married.