There are a number of toys from our childhood that we could name without a second thought, but while the likes of ThunderCats, My Little Pony, He-Man, Care Bears and Transformers remain at the forefront of our minds, we may need to dig a little further back into our memories to recall some of the items that we played with when we were a little bit younger.

The company behind many of the toys that entertained us as preschoolers was Fisher-Price, an American manufacturer bought by Mattel in 1993. Fisher-Price have manufactured a quite staggering 5,000 different toys since their formation in 1930. Below are 20 that you may well have forgotten you even played with. 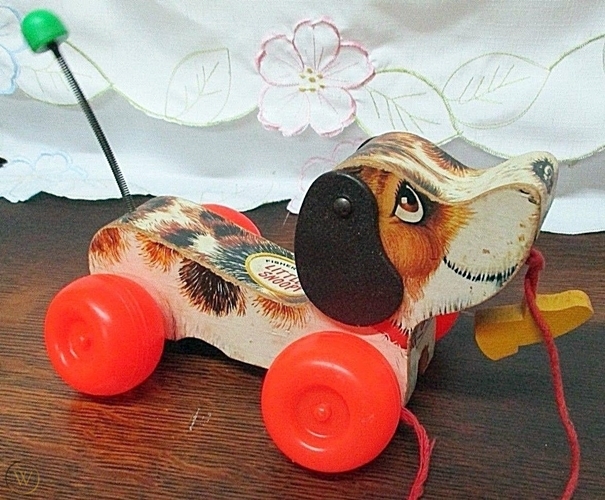 This cute pull-along dog was first manufactured way back in the 1960s, but the timeless nature of Little Snoopy means that modern versions of it are still available to purchase to this very day. 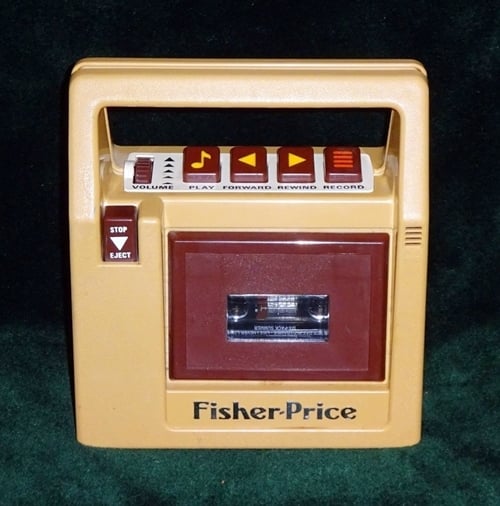 It may seem incredibly simple by today’s standards, but Fisher-Price’s Cassette Tape Player turned us and our enthralled siblings into storytellers, musicians and radio DJs. 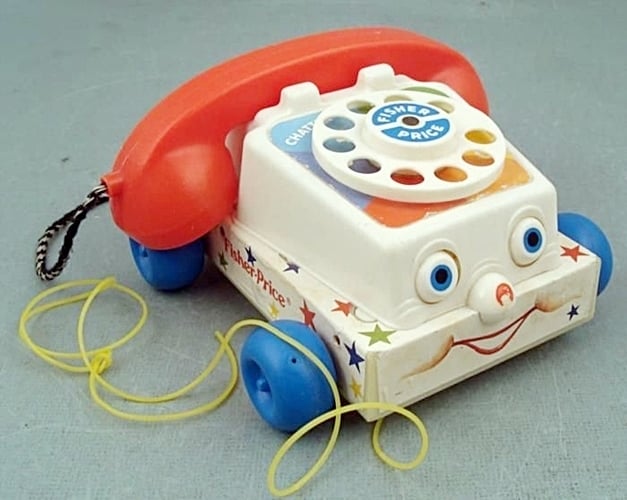 The way the Chatter Telephone’s eyes bounced up and down as you pulled it along has never left us, because it simply has to be one of the cutest things we’ve ever witnessed. 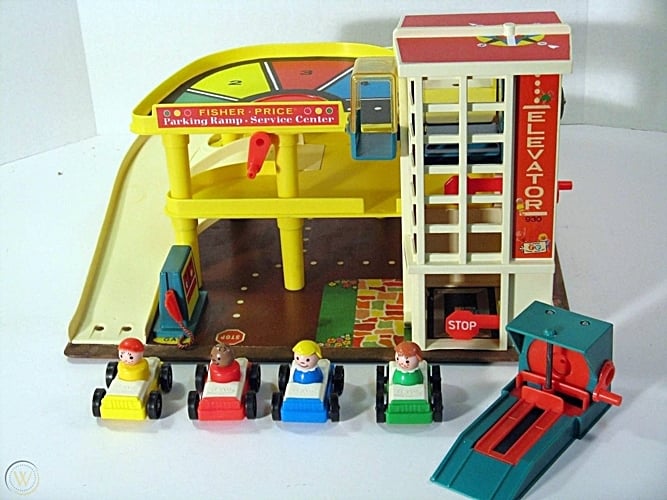 The range of Fisher-Price Little People toys was extensive, compromising houses, planes, buses and even farms. As toddlers, though, we were only ever interested in playing with the Family Action Garage, the best version of which was definitely released during the 1970s. 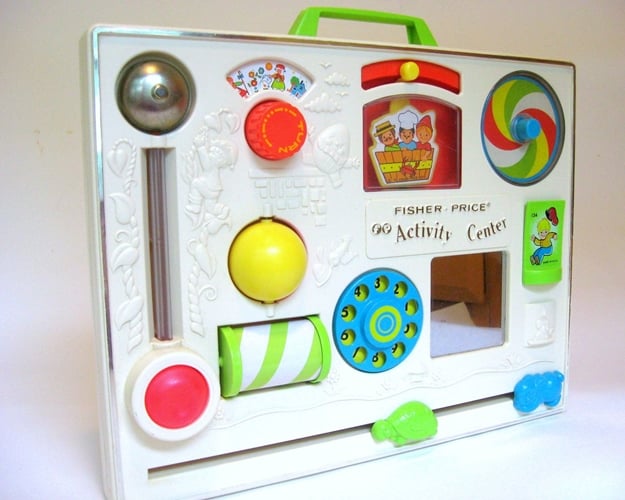 It’s hard to remember which toys we played with when we were still sleeping in a cot, but we can honestly remember fumbling with Fisher-Price’s Activity Centre like it was yesterday. 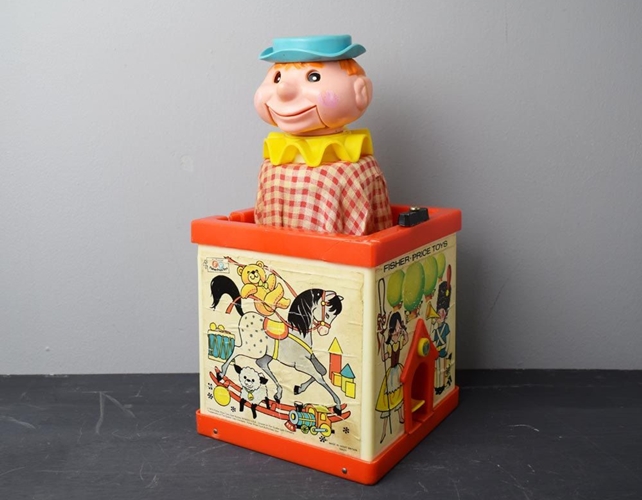 Originally manufactured during the 1970s, when jack-in-the-boxes were still allowed to make you jump, this particular toy was a great way to put an excited smile on young faces. 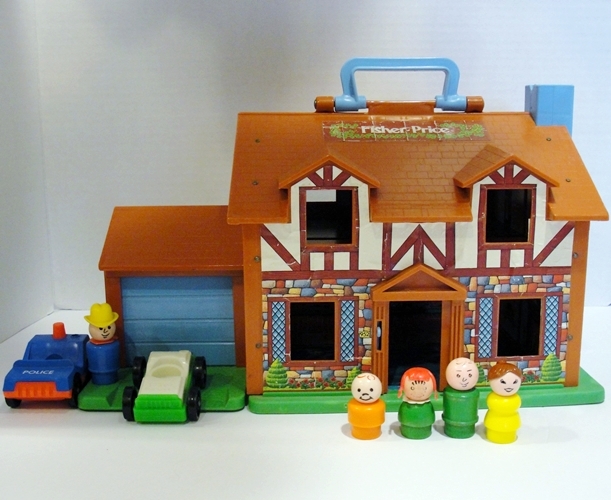 Another Little People toy we can remember owning was the Play Family House, a distinctive brown and blue Tudor-style dwelling that gave us many hours of entertainment. 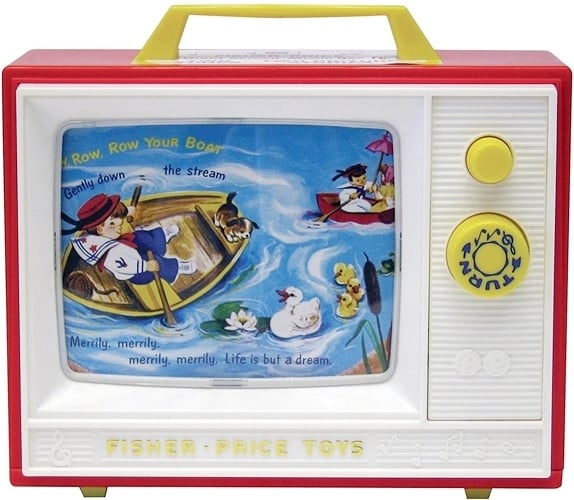 Kids these days have expensive tablet devices with thousands of TV shows at their disposal, but during the 1980s we were happy with a Musical Television that played Row, Row, Row Your Boat and London Bridge is Falling Down. 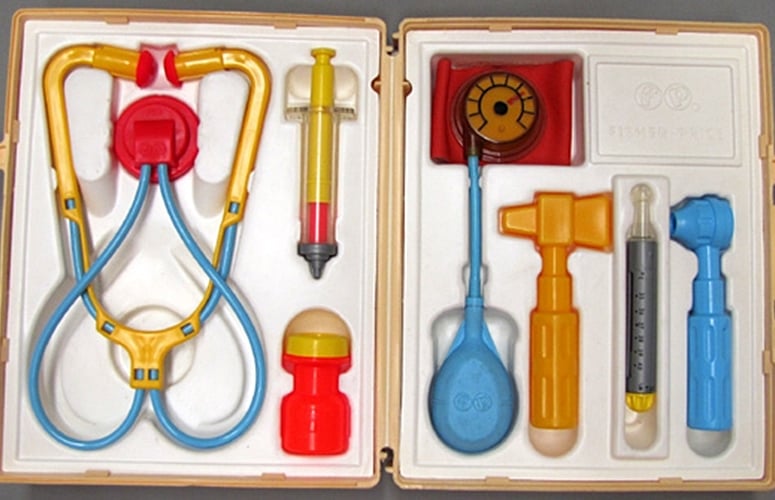 Allowing us to play doctors and nurses was Fisher-Price’s brilliant Medical Kit set, which was at least ten times better than the cheap modern day equivalents. 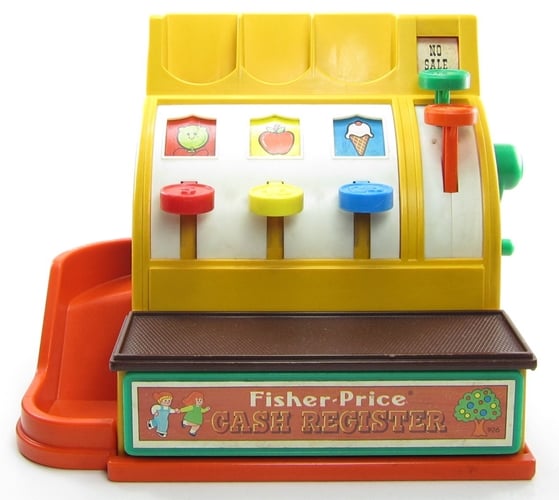 This quality take on a cash register toy asked us to insert one of four colourful coins, which would either exit down the slide or fall into the money tray, depending on which of the bright, plastic buttons we pressed. 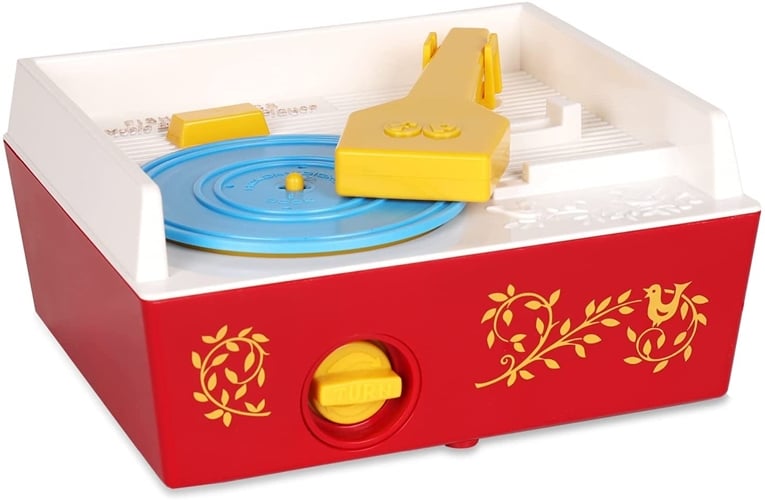 Our parents never let us mess around with their expensive, real-life record player, but thankfully we had a Fisher-Price version that let us play an impressively wide variety of different nursery rhymes. 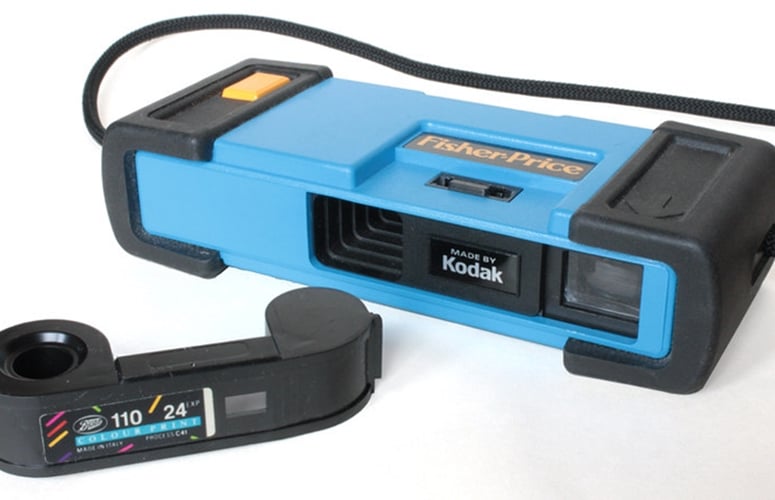 Many of our childhood toys were pale imitations of the real-life objects they were attempting to replicate, but this particular camera was manufactured for Fisher-Price by Kodak, which meant that it worked just the same as the real thing. 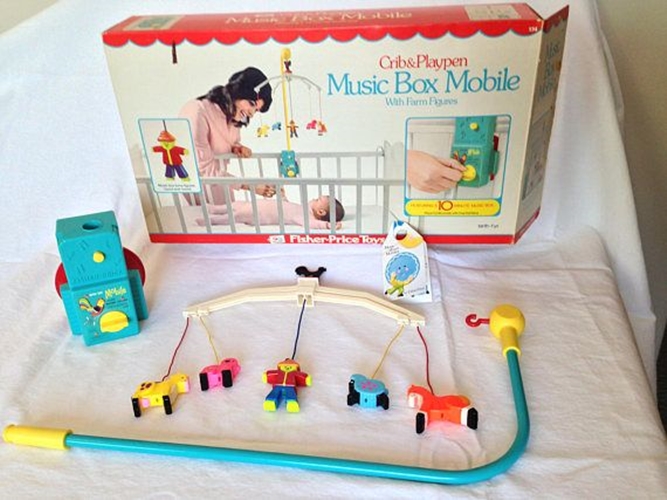 Fisher-Price have been sending little children to sleep for generations, and this timeless mobile would have been fixed to many thousands of cots during the 70s and 80s. 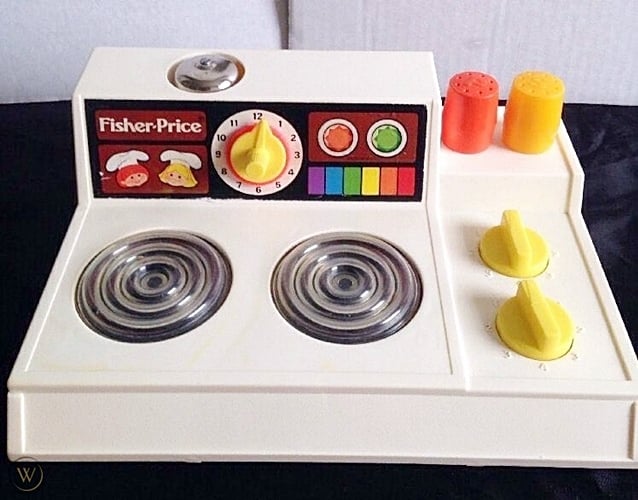 The Magic Burner Play Stove let us cook up our own culinary masterpieces whilst Mother was putting together a real meal in our family kitchen. 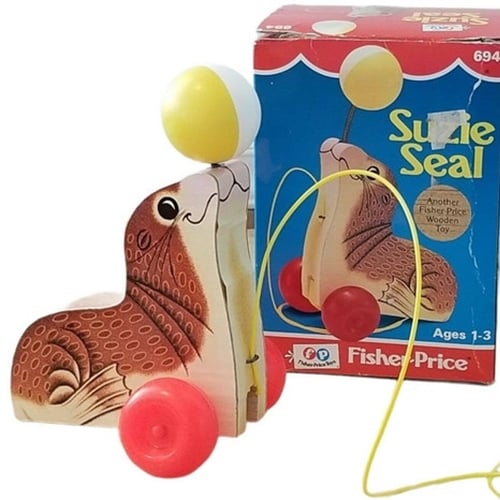 A toy that we bet you’ve completely forgotten even existed is Suzie Seal, who was first introduced at the end of the 1970s and is still available today, albeit looking slightly different. 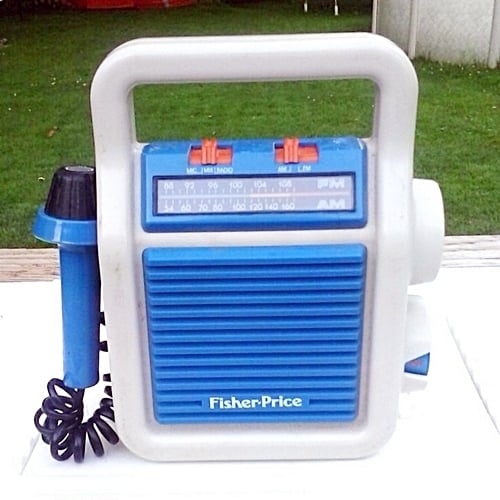 Letting us sing along to our favourite childhood pop hits, Fisher-Price’s Sing Along Radio had us honing our vocal talents when we were still in pre-school. 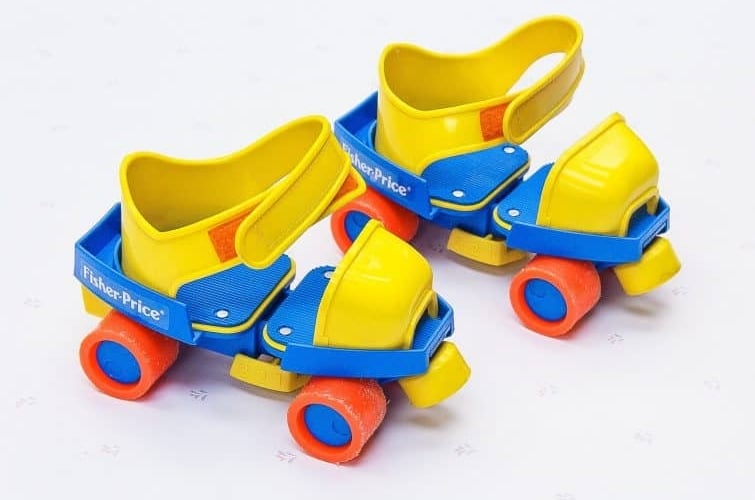 They may not have let us shoot around our street as quickly as proper, metal roller skates, but the plastic Fisher-Price version did at least prevent us from getting any serious injuries. 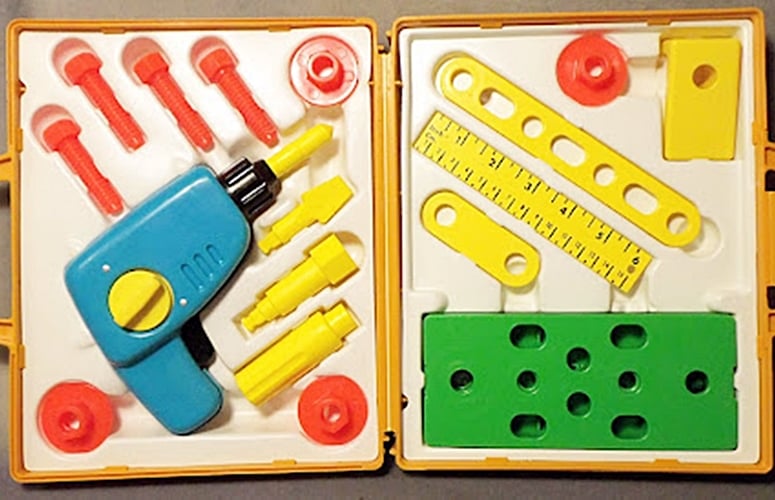 Every kid wants to be just like their dad, and Fisher-Price’s legendary tool kit – which in our opinion has never been bettered – let us hammer and saw just like our old man. 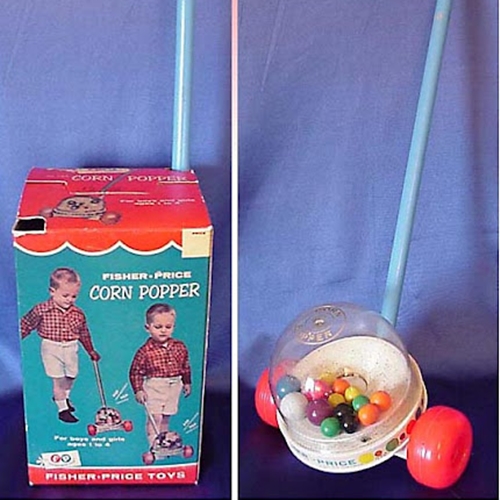 When you’re of a certain age, nothing satisfies more than pushing a colourful, noisy toy around the house, and this legendary Corn Popper certainly ticked all of our boxes. 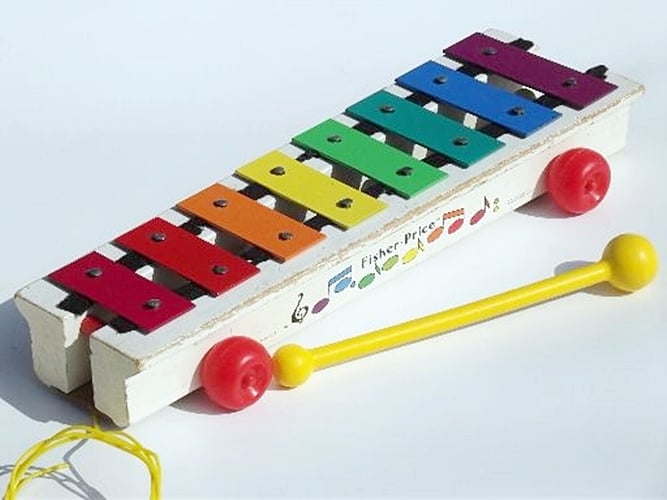 A lovely sounding instrument that we were also able to wheel from one room to the next, Fisher-Price’s version of the classic xylophone was one of our very favourite musical toys.