There are a number of toy ranges from our youth that we are never, ever going to forget, but in addition to the likes of ThunderCats, My Little Pony, M.A.S.K. and Care Bears are some three-inch plastic figurines that have slipped from our memories somewhat over the last few decades.

Whereas many of our favourite childhood TV shows were created solely to shift more units from the shelves of shops like Toys “R” Us, other wonderfully made plastic toys were created as simple tie-ins to popular programmes and films of the time, and we have ten fabulous examples of these to shine our torch of nostalgia on today. So without further ado, may we invite you to dedicate five well deserved minutes to exploring the following ten film and TV tie-in toys that you might have forgotten even existed. 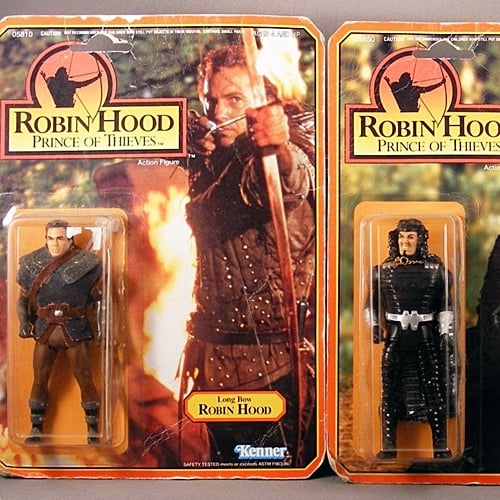 It’s one of the most memorable films of the 1990s, but a 15 million-selling song by rock legend Bryan Adams wasn’t the only thing that was released to tie-in with 1991’s Robin Hood: Prince of Thieves.

The Robin Hood: Prince of Thieves toy range meant you could own your very own Robin of Loxley, Will Scarlett or Sheriff of Nottingham. 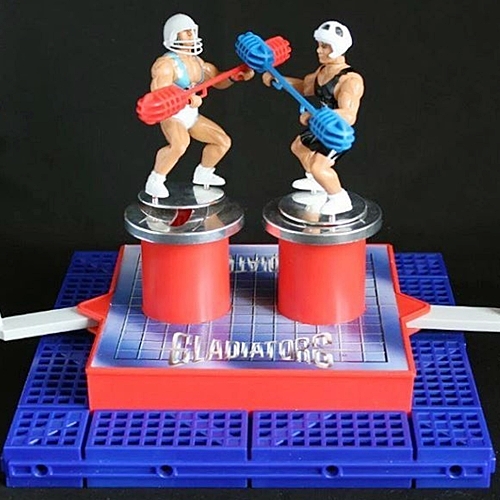 It’s a Saturday evening TV show that many of us never failed to watch during our childhood, but how many of us owned our very own Gladiators action figures?

Whether you preferred Wolf, Hunter, Jet or the disgraced Shadow, the musclebound Gladiators toys had you covered.

8. RoboCop and the Ultra Police 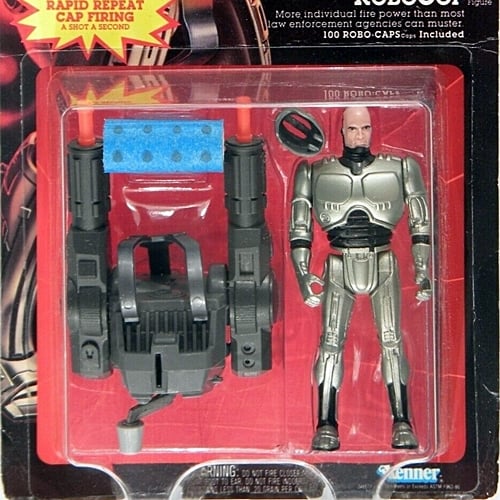 The fact that the characters were introduced in a gory, sweary, adult-only 1987 film didn’t stop toy manufacturer Kenner from trying to sell us 80s kids our very own RoboCop action figure in the form of RoboCop and the Ultra Police.

Made possible after Kenner obtained the RoboCop license from Orion Pictures, RoboCop and the Ultra Police had us all declaring “dead or alive, you’re coming with me.”

7. Star Trek: The Next Generation 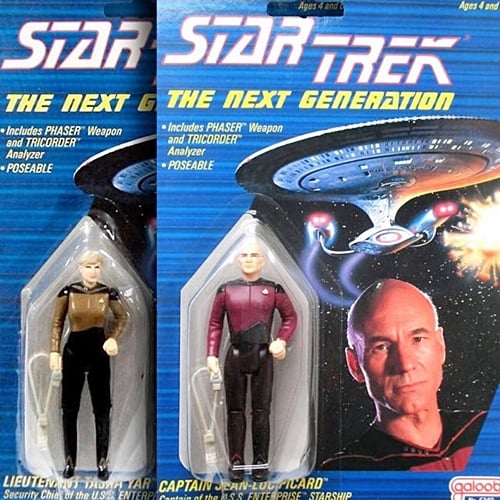 It might be our favourite science fiction TV show of all time, but we were today years old when we discovered that there used to be a range of toys based on Star Trek: The Next Generation.

These brilliant looking figures let their lucky owners continue the adventures of the Starship Enterprise as it explored strange new worlds and sought out new life and new civilisations. 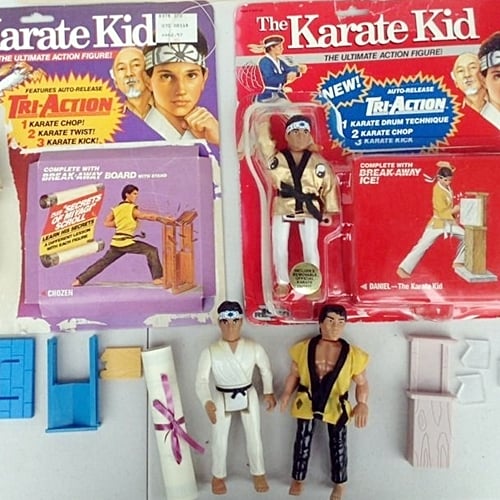 We bet you’ve watched the film a number of times since its release in 1984, but were you able to get your grubby childhood hands on a Karate Kid action figure?

The Karate Kid range of toys gave us a Daniel LaRusso who could chop through a block of ice and a Johnny Lawrence who could kick through his very own red wall. 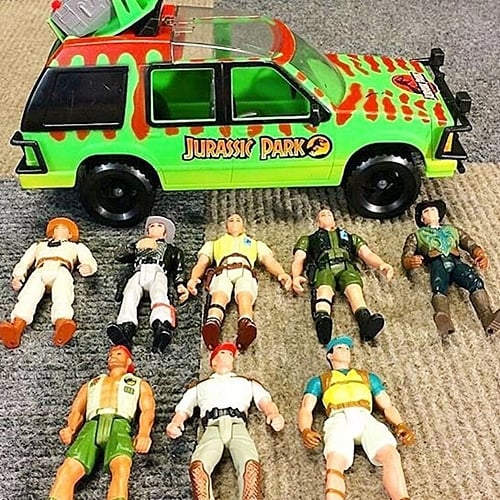 It’s the dictionary definition of a 90s summer blockbuster, and Steven Spielberg’s masterful Jurassic Park was of course released alongside a whole raft of associated merchandise.

One such money-making venture was a range of Jurassic Park toys that let us continue the adventures of Alan, Ellie, Ian, Tim and Lex long after they had escaped the dangers of Isla Nublar. 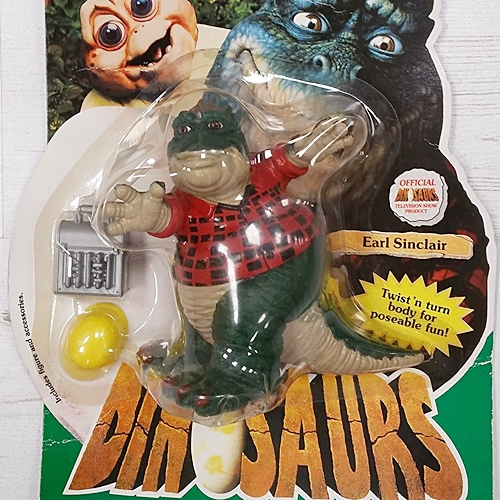 We can’t think of a single US sitcom that had its own range of action figures, except for the ones based on the brilliant early 90s show Dinosaurs.

Dinosaurs followed the adventures of Earl, Fran, Robbie, Charlene and Baby Sinclair in all of their various prehistoric suburban adventures. 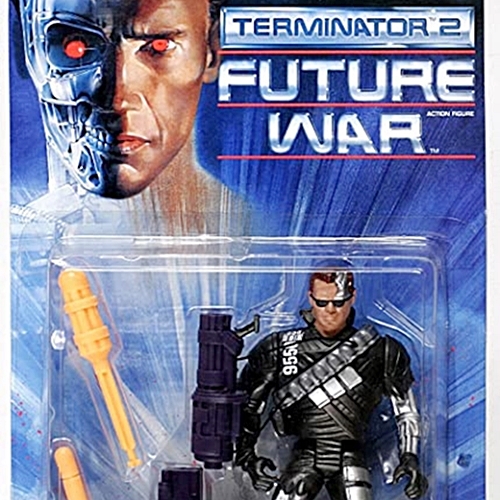 Kenner are back again with their range of toys based on James Cameron’s 1991 science fiction sequel Terminator 2: Judgment Day. 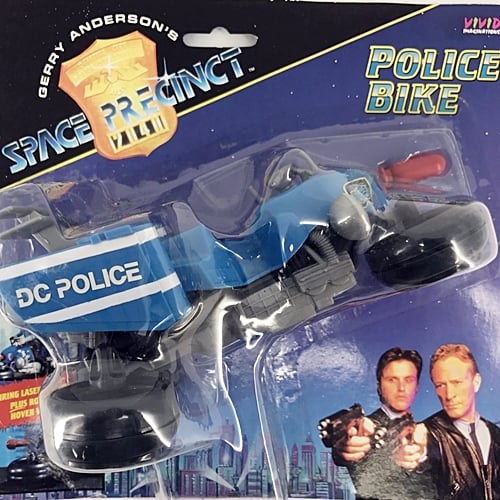 Created by Gerry Anderson a number of decades after he blessed the globe with the legendary Thunderbirds, Space Precinct followed former detective Patrick Brogan after he got an otherworldly job transfer from the New York City Police Department on Earth to the Demeter City Police Force on the planet Altor.

Unfortunately, the accompanying Space Precinct toys were as short-lived as the show itself, which was cancelled after just one series due to low ratings. 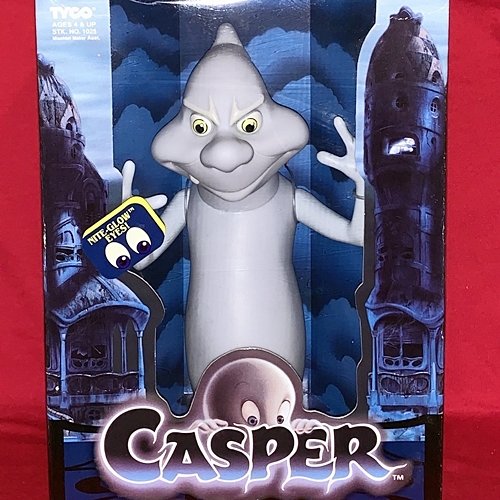 Originally a character in a 1930s comic, Casper the friendly ghost made his way onto toy shop shelves after starring in a big budget 1995 Hollywood movie.