Three weeks spent in the jungle can definitely take its toll on your looks. Just take this year’s bunch of celebrities, for example. Weight-loss is often one side-effect of living off a diet of predominantly rice and beans (depending on how well the trial has gone!) Many viewers expressed concern for James McVey after his shocking weight-loss in camp, with the Vamps band member looking noticeably more gaunt. 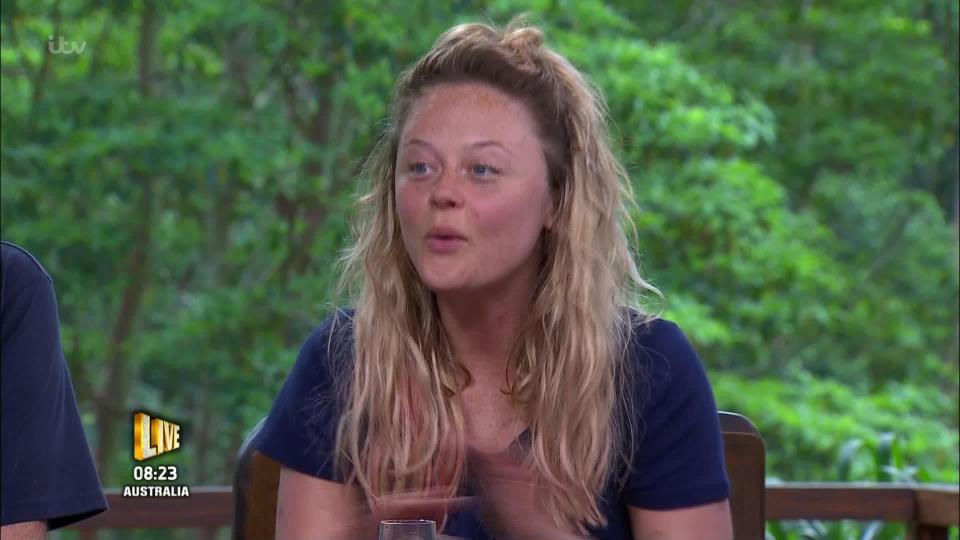 Makeup is also a luxury not afforded to the camp, and many have embraced their natural look over the series. Runner-up Emily Atack has gone au-naturel for the past three weeks, but now she’s out of the jungle, she’s had the change to be reunited with her lippy, and her glamorous makeover is stunning.

Now she’s all glammed up again, the Inbetweeners star has made another play for Harry’s son, Jamie Redknapp.

The 28-year-old has made no secret during her time on the show that she fancied the 45-year-old pundit, but she admitted that her make-up free visage might have put him off her. 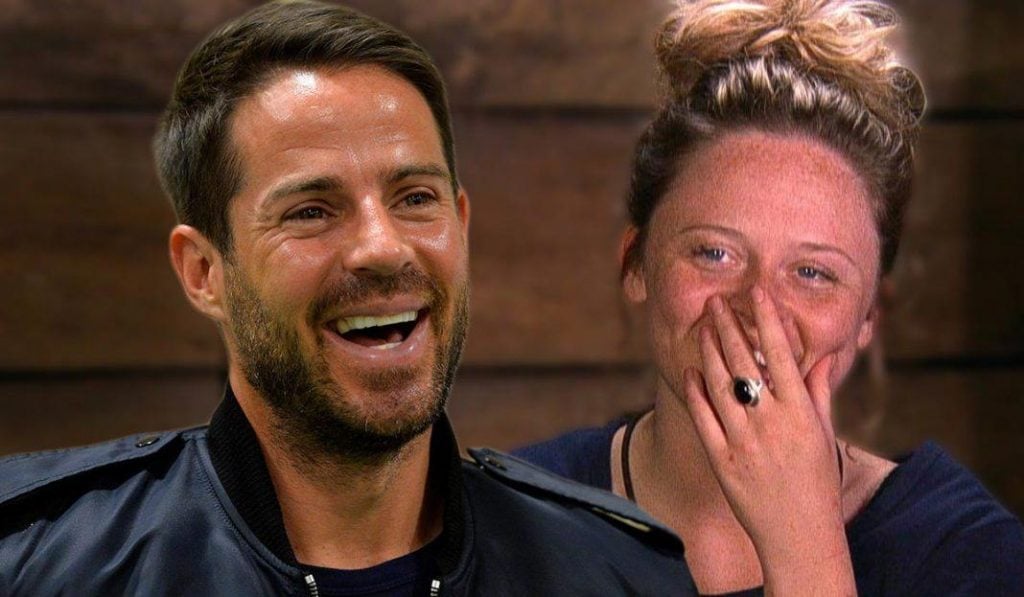 The jungle runner-up was speaking on Lorraine today live from Australia. She poked fun at herself, saying: “I am sure if he had seen me in action over the last few weeks he might not be up for it.

Her admission comes after King of the Jungle, Harry, admitted that he did not recognise his fellow campmate once she was all glammed up.

He said on Good Morning Britain: “When I first saw her in the jungle I thought no chance, but I’ve seen her today when she’s scrubbed up and she looks alright, I’m telling ya.

“But when I saw her in the jungle I thought no, you ain’t got a prayer.”

Atack wowed viewers of Lorraine in a pink dress as she chatted to the woman herself.

She said: “It’s a win, win, I have lost half a stone so I can put it all back on again and more at Christmas.” 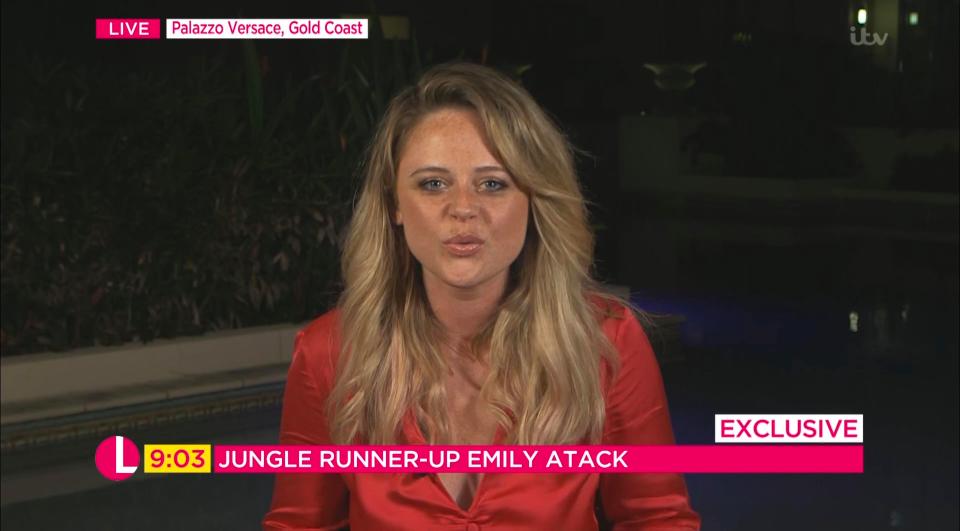 Emily spoke about embracing her natural look, including her freckles. She admitted she was happy to accept who she was.

She said: “This place has given me such self-acceptance. I worry about things constantly. I’ve learned to accept who I am. This is my skin, my hair, this is what I look like.”

She also said that it was very strange seeing everyone away from the jungle. 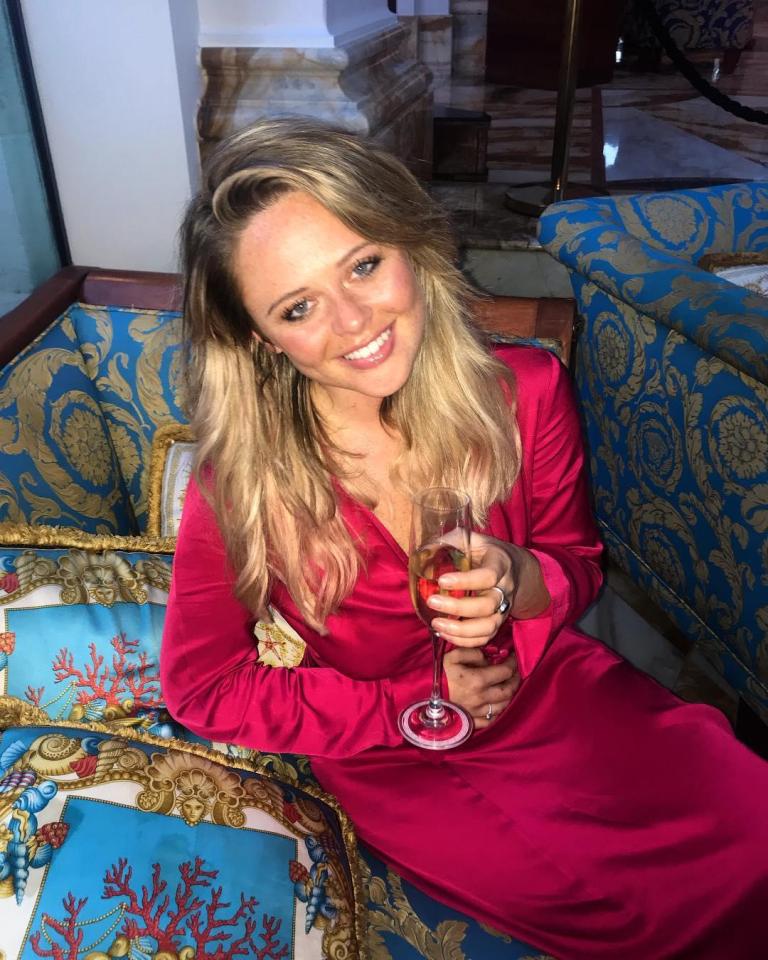 “Do you know, it’s so funny, we’re seeing each other for the first time in actual clothes and we don’t smell like cockroaches and fire,” she said.

“I think my hair still smells a bit like fire. Everyone’s beautiful and smells amazing. I’m looking at John Barrowman going, ‘You look like John Barrowman!’”

“It’s a very fickle industry, you don’t know where you are with it sometimes.” 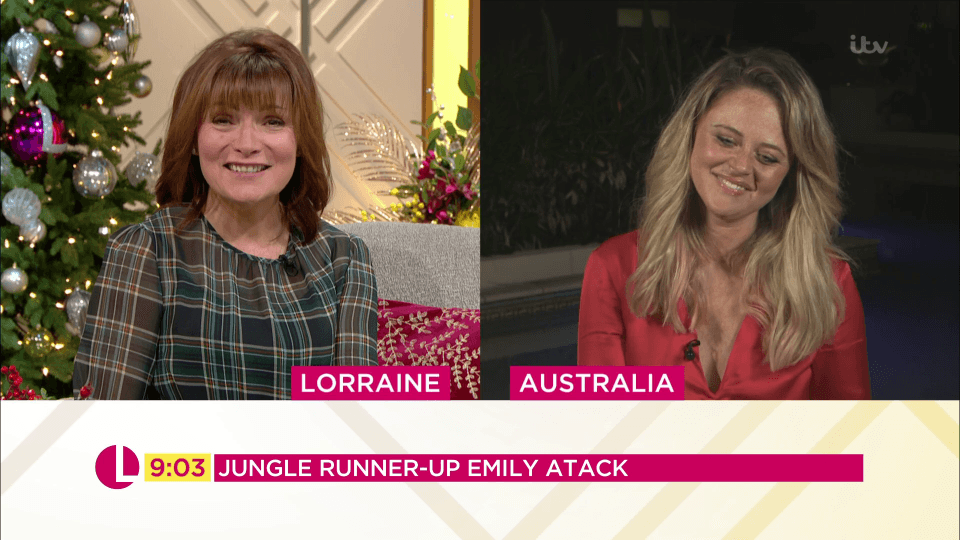 “In my private life, I felt like everything was up in the air, I needed to flip everything on its head and do something different and challenge myself.”

“I needed some excitement back in my life and get myself back again and oh boy did I do that. I found exactly what I came looking for.”

“I found incredible friendships, I found parts of myself I didn’t know I had. I had an amazing time and I’m so, so happy I did it.” 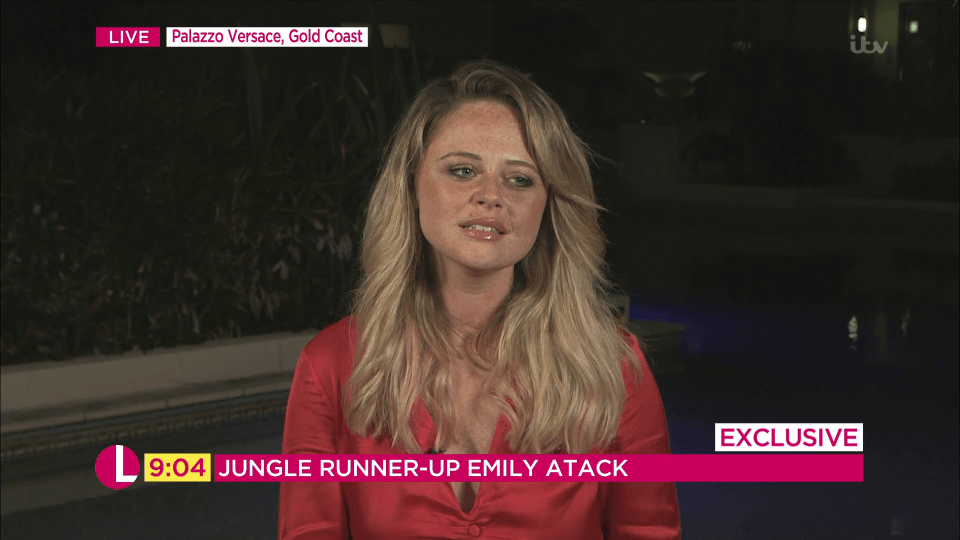