From Dynasty to the Streets: Joan Collins and Linda Evans’ Real-Life Feud

Forget Rocky vs Drago, Daniel LaRusso vs Johnny Lawrence or He-Man vs Skeletor: no 80s screen rivalry was as iconic as that of Joan Collins’ Alexis and Linda Evans’ Krystle on US soap opera Dynasty. From 1981 until the show was taken off air in 1989, millions of viewers tuned in weekly to see the two glamorous divas exchange insults and, occasionally, engage in a catfight. If the rumours are to be believed, it might not have all been acting.

During its run, Dynasty made the most of the antagonistic chemistry between Collins and Evans. While Evans has avoided saying much about her relationship with Collins, Collins has openly stated that she and Evans never got along – and when they reunited years later for a stage play, rumours emerged that the actresses were at loggerheads behind the scenes. 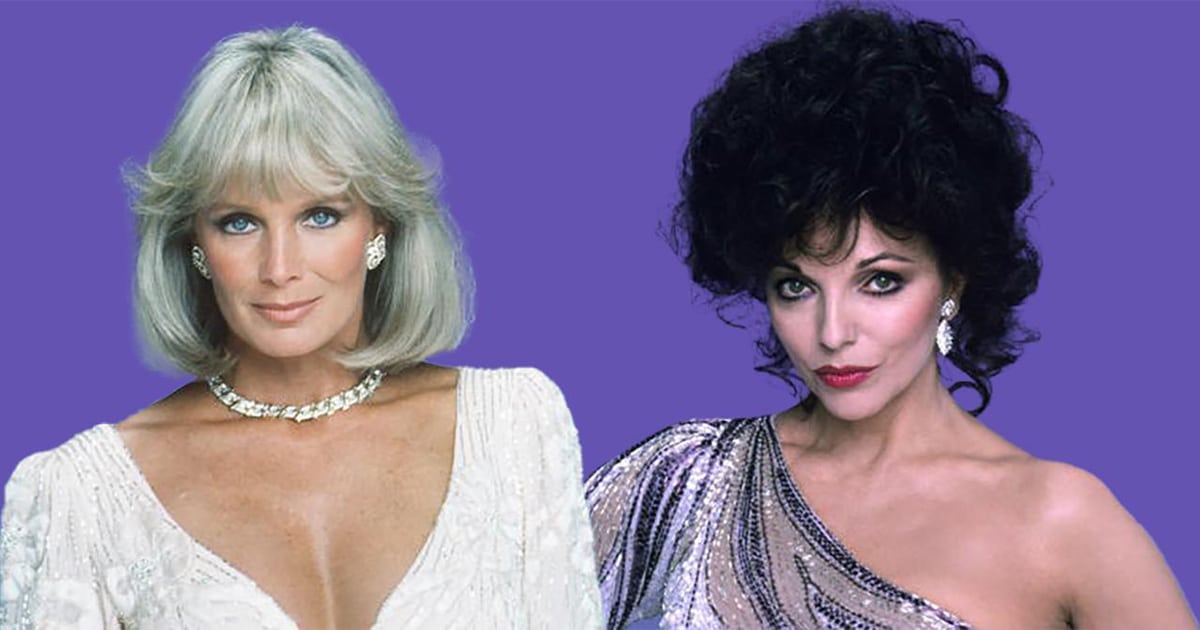 In the beginning, there was Krystle

When Dynasty began in 1981, Linda Evans was the undisputed female lead as Krystle Carrington, wife of John Forsythe’s millionaire tycoon Blake Carrington. Being cast alongside Forsythe in a starring role must have had a certain personal resonance for the Connecticut-born actress, as two decades earlier she had made her first TV appearance with a guest role on Forsythe’s sitcom Bachelor Father.

After rising to prominence with TV western The Big Valley, Evans became the third wife of actor-turned-filmmaker John Derek in 1968. She put her career on hold for a few years to spend more time with Derek, but things ended badly in 1973, when he left her for the then-17-year-old Mary Collins, later known as Bo Derek.

Evans’ casting in Dynasty was informed by the fact that she herself was known by that point for her glamorous yet turbulent personal life. Still, both the actress and her character Krystle were very much considered the good girl. Speaking to Barbara Walters in 1983, Evans remarked: “Krystle is a lot like I used to be. She lives for love, very trusting. She hasn’t learned to speak up for herself.” 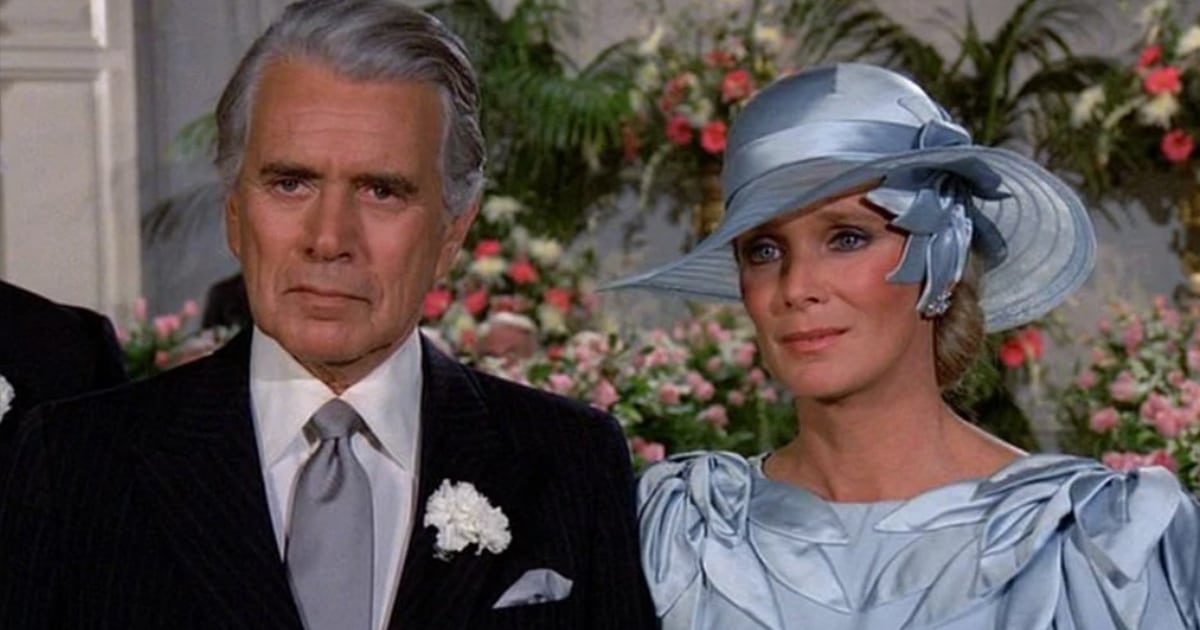 Produced by Aaron Spelling (the mastermind behind such TV hits as Starsky & Hutch, Charlie’s Angels and later Beverly Hills 90210), Dynasty wasn’t quite the hit that network ABC had hoped for in its first season. Set in the world of wealthy oil magnates in Denver, Colorado, the series was conceived as a direct rival to the similarly themed Dallas, but initially failed to offer much of a challenge to the CBS soap in the ratings.

At the time, Collins had been in the business for more than three decades and enjoyed celebrity status. Her career had been on the wane, but her appearances in spicy melodramas The Stud and The Bitch (adapted from novels written by her sister, Jackie Collins) helped put the actress back on the map, and on the radar of Dynasty’s producers. 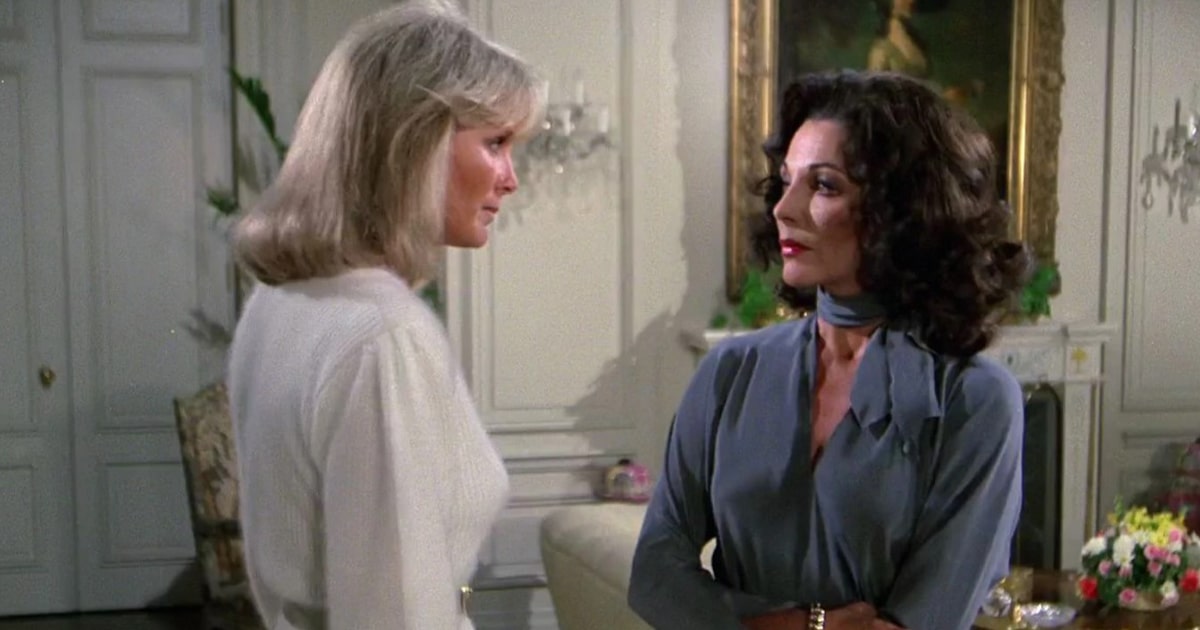 Alexis was the yin to Krystle’s yang, and the conflict between the two characters helped take Dynasty to a whole new level in its second season. Soon enough the viewing figures skyrocketed, and the soap achieved its goal of overtaking Dallas in the ratings. A lot of people attributed Dynasty’s newfound success to Collins’ casting – and, according to Collins, this didn’t go down well with her co-stars.

Collins told Attitude in 2019, “There was a lot of resentment. I’ve been asked this question a million times, and when I was doing [Dynasty], I would poo-poo it. I’d say, ‘Oh, no, no.’ But yes. There was… the fact that I was English, some didn’t like that. This English woman comes in and saves the show. This is what the media said, because the show was about to be cancelled… Even now, when we get together for Dynasty reunions as we did a few years ago, I see an antipathy towards me.”

Collins’ vitriol has long been aimed primarily at Dynasty’s late leading man John Forsythe. In 2021 she told Page Six, “I didn’t like him,” and called the show’s producers “misogynistic” for indulging Forsythe’s contractual demands for more money and greater prominence in the show’s marketing – even though most would agree that Collins’ Alexis and Evans’ Kristelle were the bigger audience draw. Yet on top of her eventual disdain for Forsythe, Collins says there was tension between herself and Linda Evans from day one. 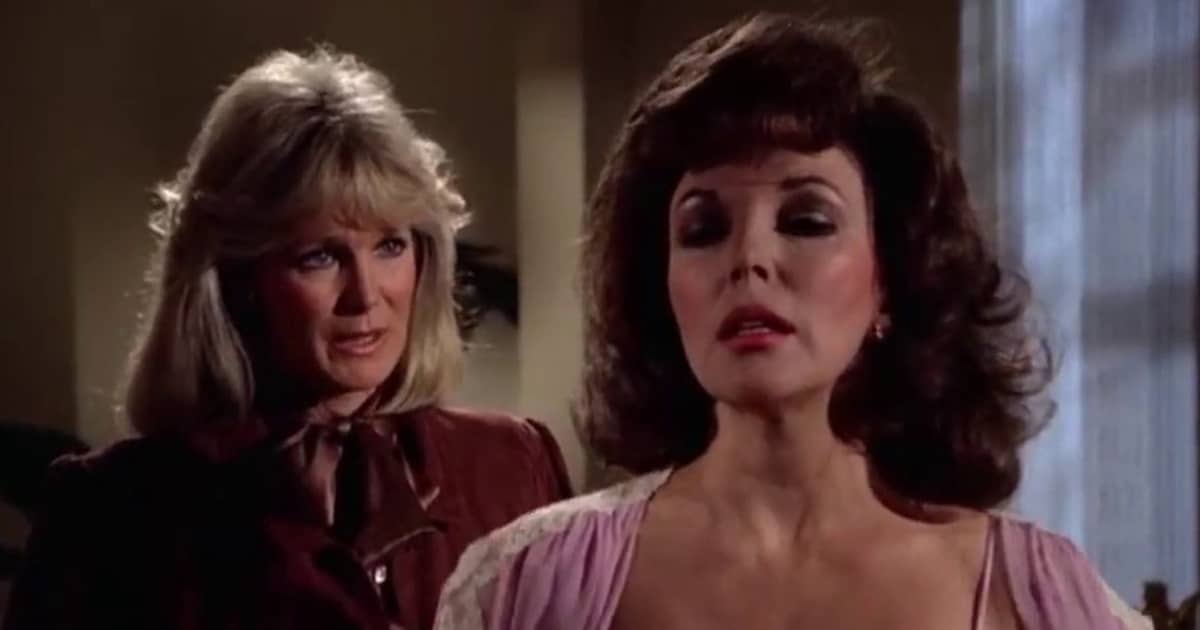 Collins recalls, “In the very first scene that Linda and I had, I had to yell at her, ‘So who do you think you are? You’re just a trumped-up little secretary who wormed her way into Blake’s life!’ During the rehearsal, I played it down. I just said the lines, did the moves. Then when it came to actually shooting it, I saw Linda visibly shrink back from me. At the end, she said, ‘Oh my God, that was so real. Did you mean it?’ I said, ‘Linda, it’s called acting’. From then on, she felt that I didn’t like her, and she didn’t like me.”

Evans recounts things a little differently. In her book Recipes for Life (a crossover of cookbook and memoir, Evans being a keen cook), Evans suggests having welcomed Collins’ arrival on Dynasty: “I loved that Joan Collins and I were older than most leading women on TV and that our characters were portrayed as glamorous and vital. I thought it was a wonderful message for women everywhere.”

Later, in a TV interview for Dynasty’s 40th anniversary, it was stated that Evans and Collins (who Evans calls “an excellent actress”) had met prior to beginning work on the show, and Collins had even been a dinner guest at Evans’ home. Collins and Evans would be divided on the set of the show, though, at least in part by differing work ethics. 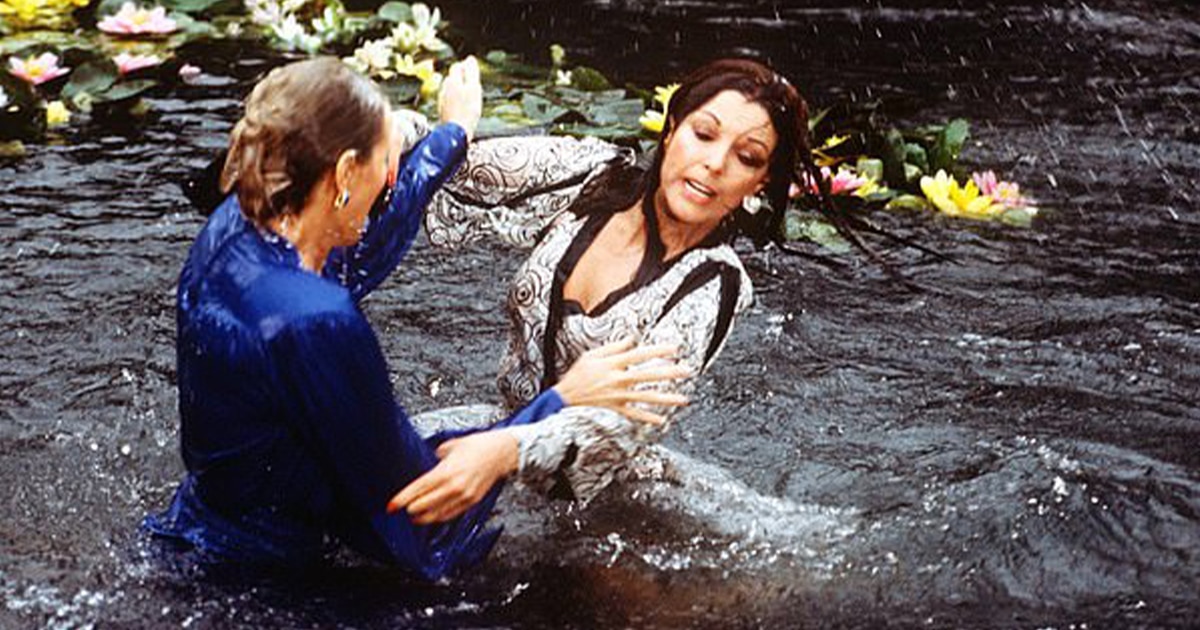 The American Evans enjoyed the more physical aspects of the work, whereas the English Collins preferred not to get her hands dirty – although this wasn’t always possible given the dynamic between Alexis and Krystle. Evans admits, “the audience always looked forward to these confrontations and so did I. Joan loved the verbal fights – I hated them. I loved the physical fights – she loathed them. We did them all – for nine years!”

Collins said as much to ET Online, noting that Evans “loves doing her stunts” whilst she prefers not to. Nonetheless, Collins was persuaded to do her own stunt when filming a catfight scene in a pond. “I did go into the water… we did several takes. Then, when Linda went to hit me and the director said cut, he didn’t say cut early enough and she did connect a little bit with my chin. So that’s not acting, when you see that bit.”

Collins has accused Evans of leaving her with a “practically dislocated” leg whilst shooting the pond scene. Collins has also claimed Evans sent her to “the emergency ward with a dislocated neck vertebra” after another on-screen brawl. 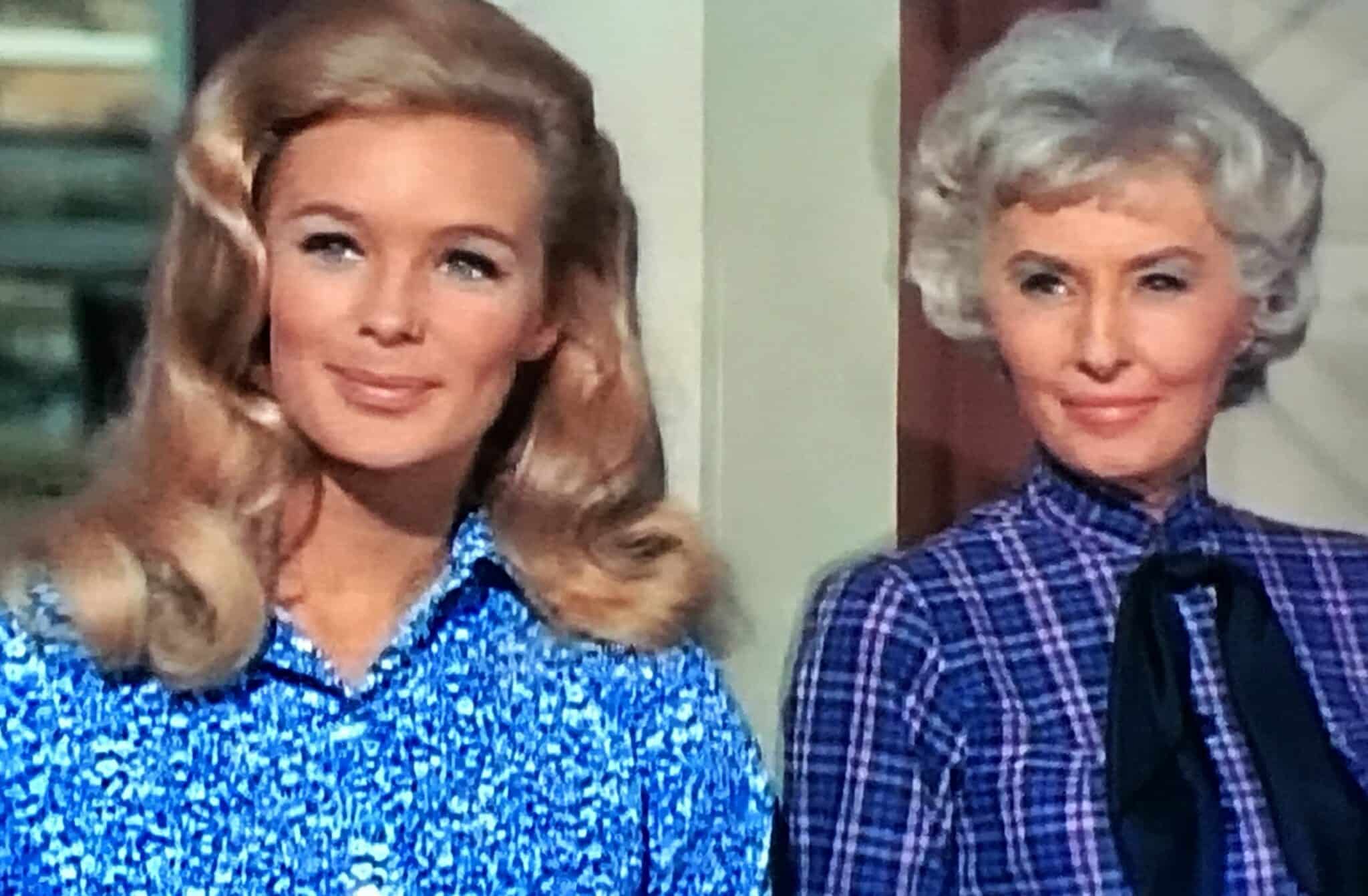 Though Collins has been openly negative about her Dynasty co-stars, accounts of any feud between herself and Evans can seem rather one-sided. Evans has denied any personal animosity towards Collins on the Dynasty set, saying in a 2021 interview: “We never had one personal fight in the nine years we did the show together. It was just that when the camera rolled, they wrote us to beat each other up.”

Evans has a considerably less diva-ish reputation than Collins. She had a rocky start with co-star Barbara Stanwyck on her earlier show The Big Valley, with Stanwyck once recalling that on that show’s first season, “Linda didn’t always listen to me and I didn’t like that. But the second season we spent a lot of time together and she did better. That is, once she stopped giggling.”

Ultimately, Evans and Stanwyck became close, with Stanwyck later calling Evans “a rare and beautiful gem,” and Evans affectionately taking to calling Stanwyck “Mom.” Evans is also said to have enjoyed close friendships with Ursula Andress (the ex-wife of her former husband John Derek) and Bo Derek (the younger woman who John Derek left her for). 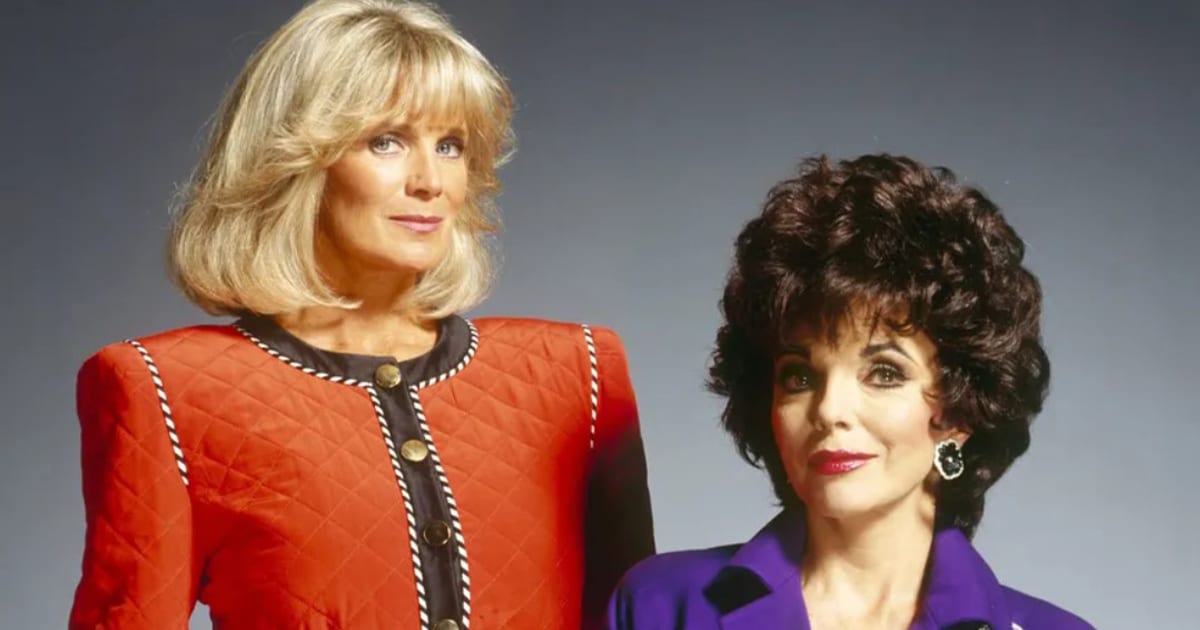 Indeed, Evans’ sensitivity ultimately informed her decision to quit Dynasty early into its ninth season in 1989. The high level of fame became too much for her, and she “wanted a life.” Without Evans, Dynasty was on shaky ground, and with viewing figures declining the series wound up coming to an end only four months later.

In 1991, most of the cast and crew (Collins and Evans included) reunited to tie up loose ends with two-part mini-series Dynasty: The Reunion. Soon after this, Evans entered a period of semi-retirement as an actress, disappearing from the public eye. Collins, however, continued to work extensively in film, television and theatre.

“She’s never been on stage…and she wasn’t even that good on TV!”

It was on stage that Collins and Evans would eventually reunite, in a 2007 production of Legends!, a stage play about a pair of ageing movie star arch-rivals. From a PR perspective, the casting could not have been more perfect; as such, when word broke that Collins and Evans were genuinely feuding behind the scenes, some commentators suspected this news leak was just a publicity stunt. 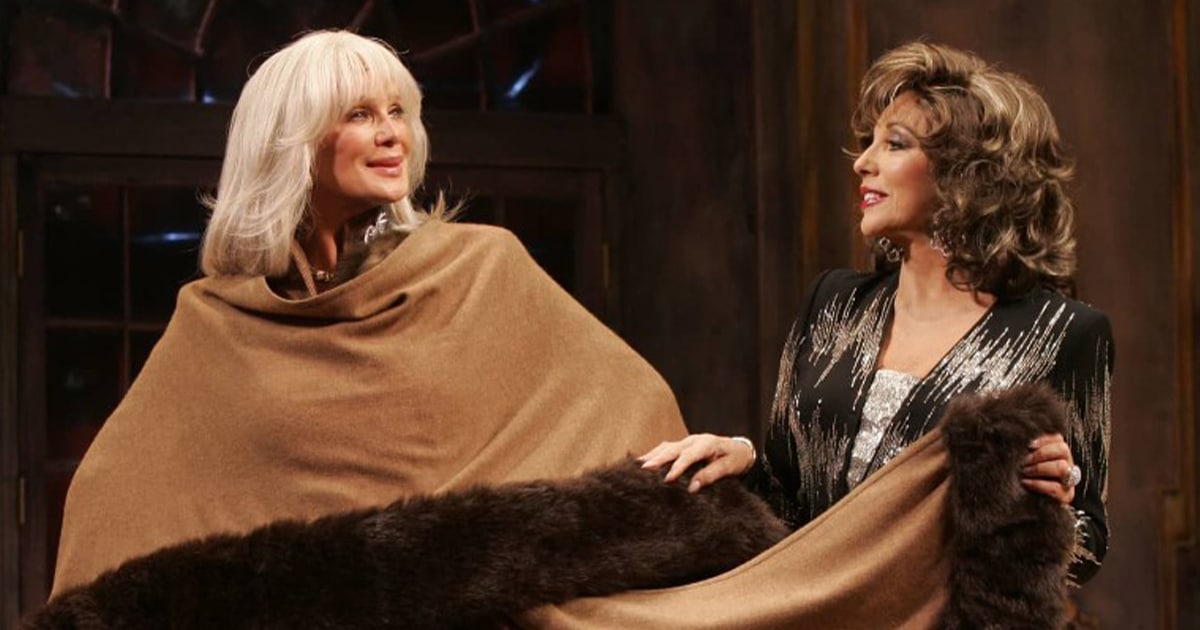 Evans has said nothing negative about that experience in public; in an Instagram post, she described the nine-month run of Legends! as a “life changing experience… I love where my adventures have taken me!” Collins, by contrast, has offered a considerably more detailed – and barbed – account of events.

In her published diaries, Collins mentions having been cast first in Legends! and being “not thrilled” when the producer informed her that Evans would be joining her, complaining, “she’s never been on stage at all – and she wasn’t even that good on TV!” Collins accused Evans of having extensive cosmetic surgery prior to rehearsals, claimed Evans once again injured her by getting too into the physical moments, and made the entire production sound every bit as rife with drama and tension as a season of Dynasty.

Legends! marked the last time to date that Evans and Collins have worked together. Though approaching her 90s, Collins is still working, clocking up three movies, two TV credits and a theatrical tour since 2020. Meanwhile, the now 80-year-old Evans has enjoyed a latter-day resurgence, appearing in the film Swan Song in 2021. Will these two off-screen rivals ever reunite to feud again on the big screen? There’s still time…