Whether your 1980s school lunch box came adorned with a picture of He-Man, My Little Pony, The Transformers or Rainbow Brite it didn’t matter, because contained within were sandwiches, snacks and drinks so delicious, that it made going to school every day an absolute pleasure.

In the UK celebrity chef Jamie Oliver ruined the lunch times of an entire generation by insisting they eat packed lunches that were ‘healthy’ and ‘nutritious’, but before the Essex based spoil-sport ruined our fun, we ate snacks that were ridiculously high in salt and sugar, and most importantly were completely and utterly delicious.

So please make yourselves comfortable as we prepare to take a trip down a rather tasty looking memory lane, to a time when the words ‘healthy eating’ meant absolutely nothing to us whatsoever. Below are 15 yummy drinks and snacks that we all wanted our parents to pack into our 1980s school lunch boxes. How many do you remember? 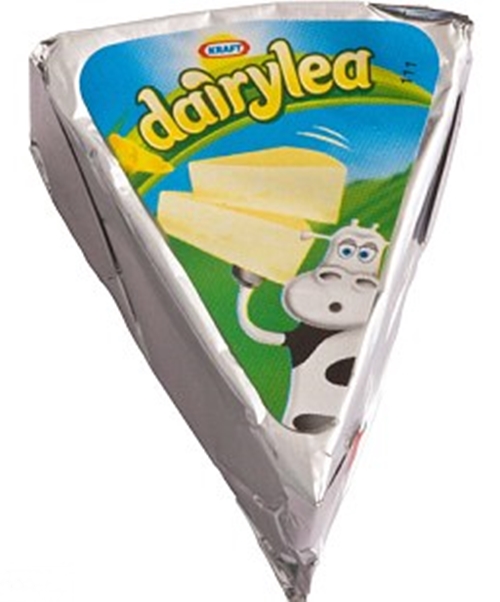 No good school lunch box was complete without at least one Dairylea Cheese Triangle being stored within, the taste of which we can still remember, despite the fact that we’re rapidly approaching our middle age.

Dairylea Cheese Triangles were originally a complete pain to open, usually forcing us to give in and squeeze the soft cheese into our mouths, but someone later came up with the far superior ‘red strip’ opening method which made our lives a whole lot easier. 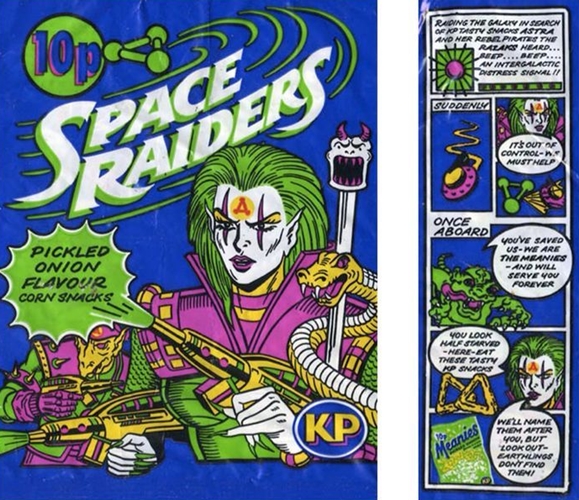 You got a lot for your money back in the 1980s, and Space Raiders were a prime example of this, tasting absolutely delicious but costing just 10 of our hard earned pennies.

And not only were they the yummiest crisps on the market (apart from maybe Monster Munch, which we’ll come onto later) but they also came with a tiny little comic strip printed on the reverse of the packet. 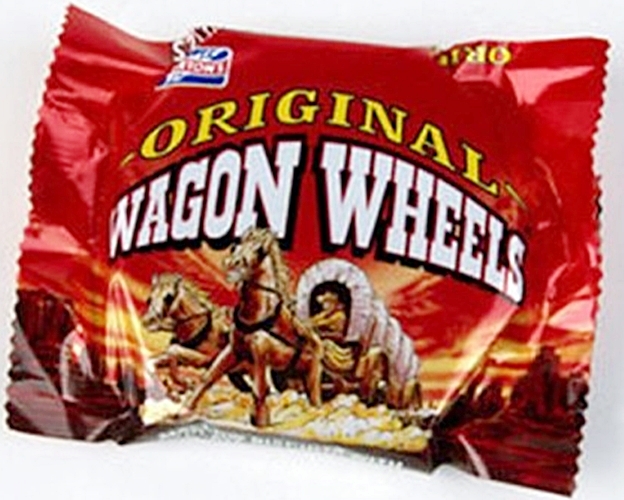 One of many 1980s products that have suffered from the terror known as ‘shrink-flation’, Wagon Wheels used to be absolutely massive, but are now about the width of a coffee mug.

Filled with delicious marshmallow and surrounded by yummy chocolate, Wagon Wheels are a lunch time treat that we hope never go out of fashion. 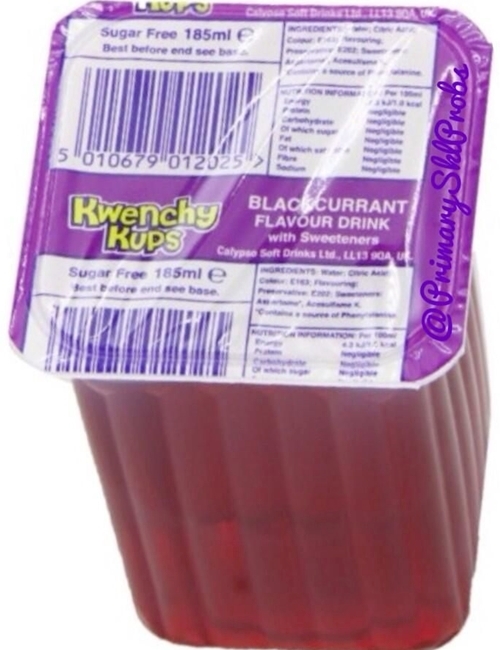 These days, us adults force our deprived children to drink ‘water’ or at least ‘sugar free’ squash, but only a few decades ago our lunch time beverage was filled to the brim with all kinds of unhealthy ingredients.

Kwenchy Kups were one such drink, requiring you to slam a thin plastic straw through the almost impenetrable lid before you consumed the delights contained within. 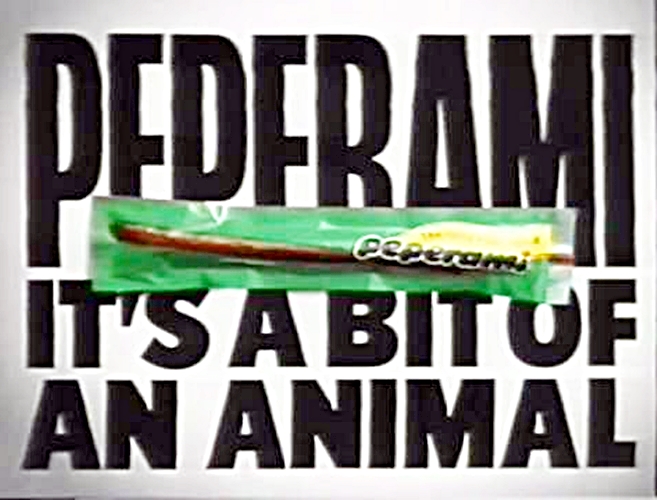 Personally we’ve never understood why anyone would want to eat a smelly salami sausage, but we definitely do remember Peperami being all the rage amongst many of our school friends.

Introduced to us with a TV advert that claimed ‘Peperami, it’s a bit of an animal,’ Peperami sticks are still very much going strong today (and that’s just the smell). 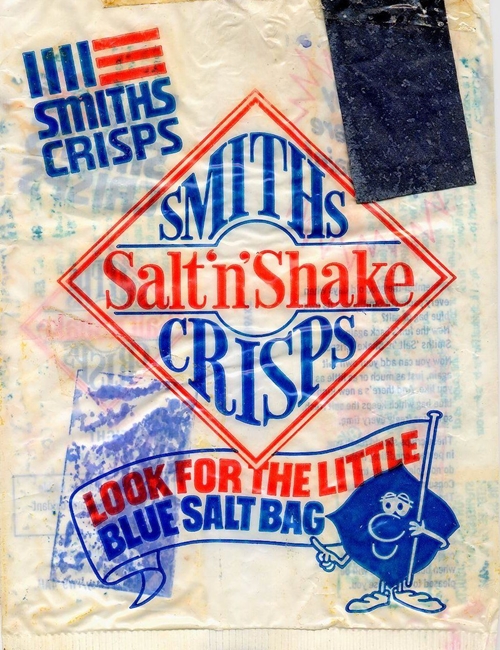 We certainly weren’t ashamed by the high salt content in our 1980s school packed lunch, but one particular snack made a show of it more than all of the others put together.

Because a packet of Salt ‘n’ Shake crisps required that you take part in a ritual that involved ripping apart a small blue sachet of salt, pouring it in your bag of delicious crisps, and shaking it around violently to ensure maximum flavour. 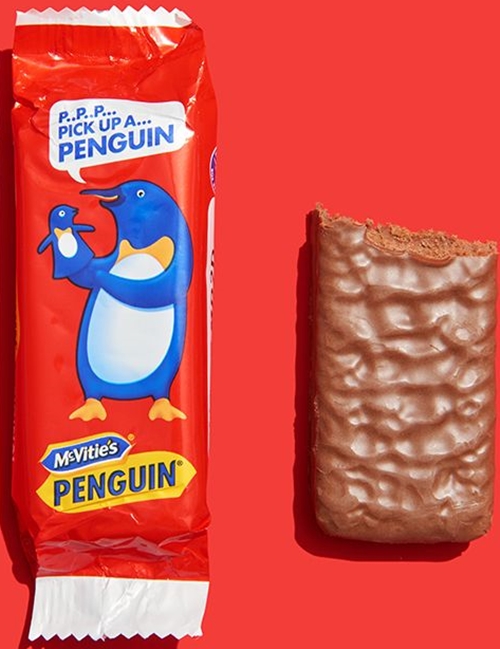 A 1980s snack time staple, Penguin chocolate bars have a taste that has perhaps never been bettered in the four decades since.

Featuring all manner of different Penguins on the cover, these yummy crunchy chocolate bars were a real lunch time favourite. 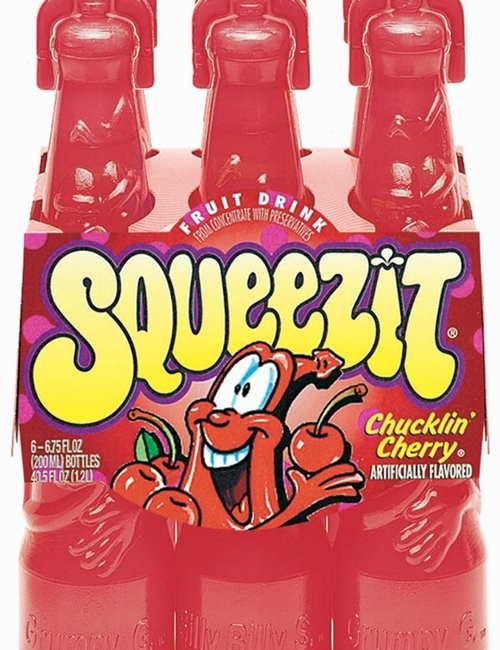 Another drink that may well have contained more harmful materials than a nuclear power plant, Squeezit drinks gave us about a week’s worth of of our recommended daily allowance of sugar in one powerful hit.

Requiring that you twist the lid and squeeze the plastic before you could enjoy your drink, Squeezits were as fun as they were tasty. 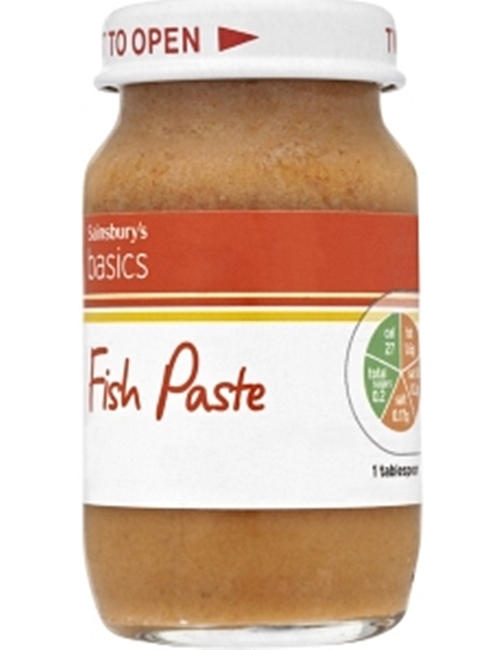 Our 1980s lunch time sandwich often contained things like cheese, ham and tuna, foods that we wouldn’t hesitate to feed to our own children.

But there were also occasionally some horrors contained within the two slices of white bread, such as spam, corned beef and the horrifically smelling monstrosity known as fish paste. We loved the taste, but the odor it gave off for hours after was repugnant! 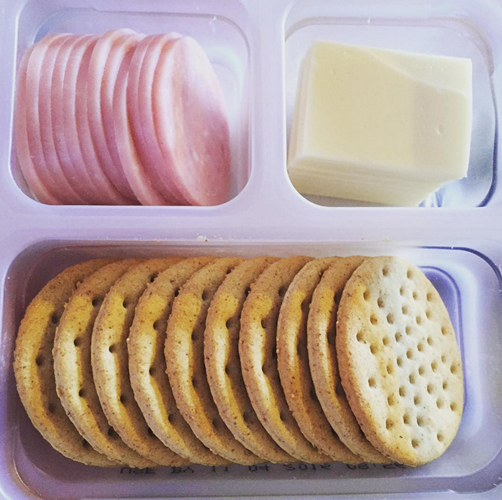 Letting you make your own mini sandwich out of crackers, ham and cheese, Dairylea Lunchables were almost as fun as those ‘make your own burger’ jelly sweets that we used to be able to get our hands on.

The ham and cheese within the packet contained enough preservatives to keep them edible for months and months, but it didn’t stop it from being one of our very favourite lunchtime treats. 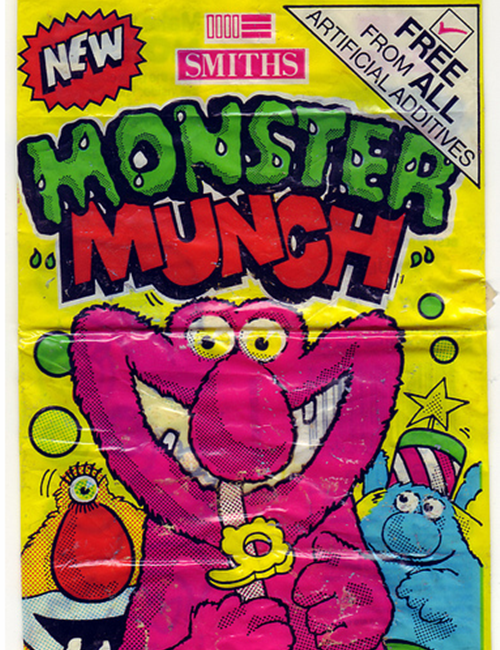 As adults we’re a big fan of strong, powerful flavours in our food, but nothing compares to the strength of a 1980s Pickled Onion flavoured Monster Munch.

Filled with the largest sized crisps that we’ve ever has the pleasure of consuming, Monster Munch is another one of our childhood snacks to have shrunk beyond recognition. 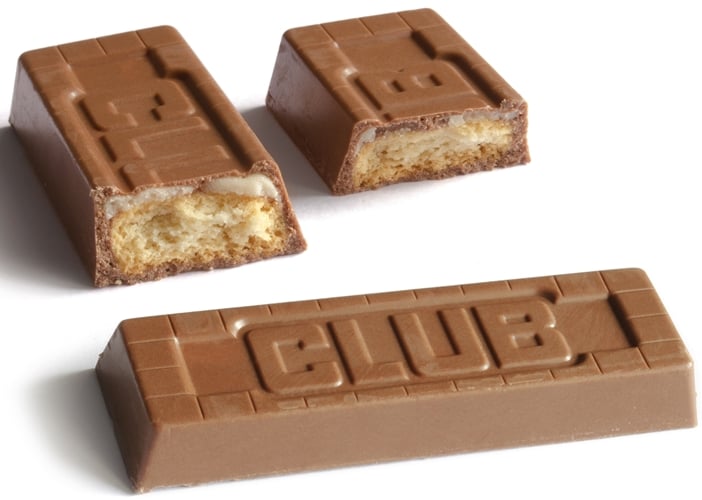 If we wanted a lot of chocolate on our biscuit then we had to ‘join our club’, and we were only too happy to succumb to the marketing whims of manufacturer Jacob’s legendary advertising campaign.

Other lunchtime chocolate bars we could have featured include Breakaway, United, Blue Riband and Trio, but Club, along with the aforementioned Penguin and Wagon Wheel, were our absolute favourites. 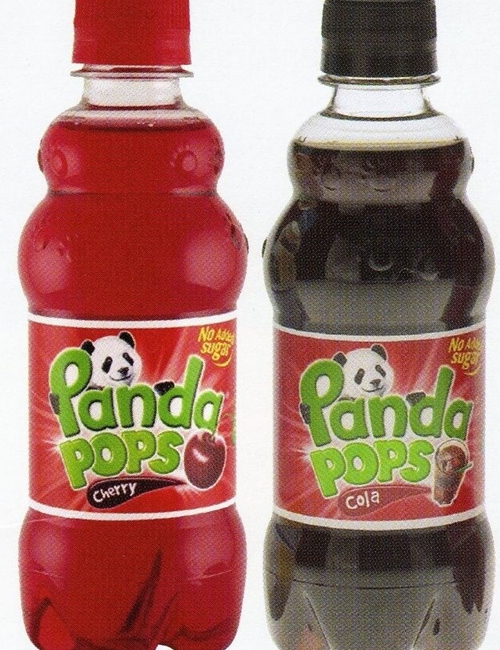 A long time ago, in an age when we were somehow allowed to take fizzy drinks to school, Panda Pops were the cheapest available carbonated beverage around.

And despite not breaking the bank of our financially minded parents, Panda Pops were actually rather delicious, to the point where we don’t remember ever longing for a Coke or a Pepsi. 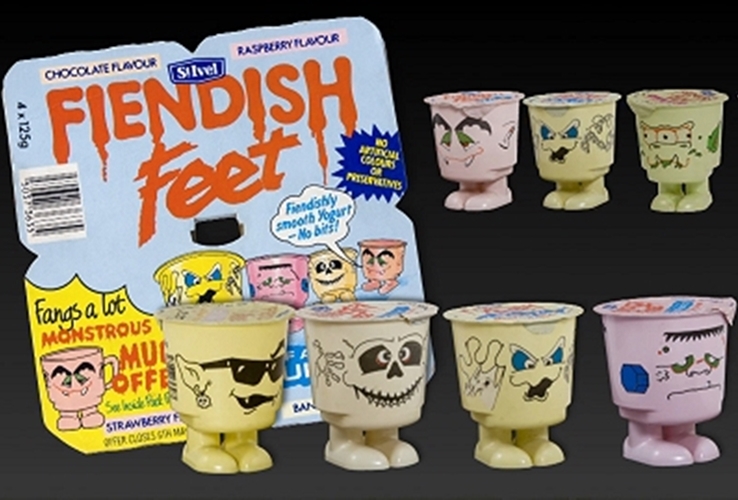 Those of you who brought a yoghurt to school when you were a child may have consumed a wide variety of different brands (Ski anyone?), but there was one particular milk based dessert that ruled the roost over all the others.

If you remember, Fiendish Feet yoghurts came housed within one of a variety of different cute looking monsters, but only the very luckiest amongst us had one added to our school lunch box. 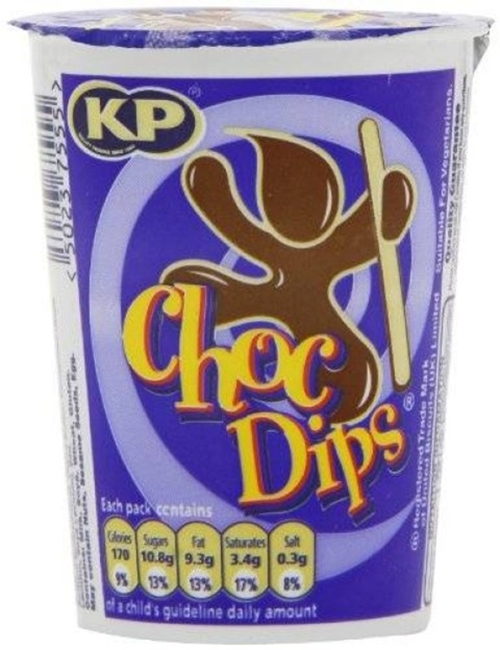 Snack manufacturers usually apply the chocolate to the biscuit for us, but one brand decided it would be fun for us to be able to do it ourselves, and boy were they correct.

KP Choc Dips required that we dip a long, thin piece of biscuit into an always far too small vat of chocolate, creating an experience that was about as fun as lunchtimes have ever been.