10 Discontinued Crisps All 80s Kids Would Love To See Again

Modern day shop shelves are crammed from top to bottom with all manner of potato based snacks, but that doesn’t mean that all of our cravings are catered for when we zoom down the crisp aisle of our local supermarket.

Because many of our all-time favourite flavours have been discontinued in the decades since we were children, leaving a decidedly hungry hole somewhere right at the bottom of our stomach. We decided it was time to call for some of our favourite brands to be reintroduced, so please join us as we remember ten timeless, retro crisps that all 80s kids would love to see again. 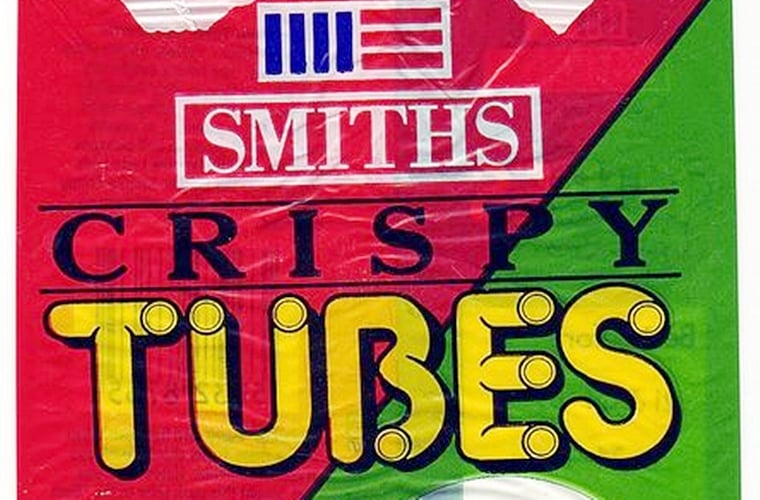 Whilst you may still be able to find a similar product going by the name of Wheat Crunchies, nothing beats the succulent, snappy taste of Smiths’ legendary Crispy Tubes

Production of these classic 80s tummy fillers tragically ended for good in 1993, a few years after the Smiths brand was sold to Walkers. 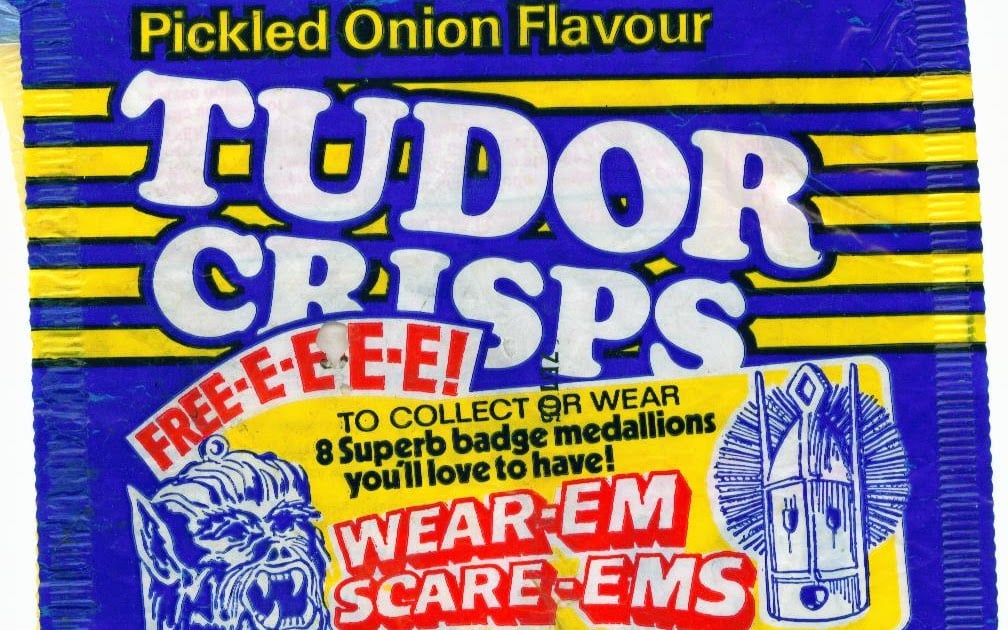 Tudor crisps were originally sold with a memorable advert that featured a paper boy being bribed with “a canny bag of crisps” to encourage him to deliver newspapers to an unreasonably tall block of flats.

Originally made by an independent company in Newcastle, Tudor was acquired by Smith’s Crisps in 1961, before they too were purchased by Walkers in 1989, leading to the eventual decline of Tudor’s flavorsome range. 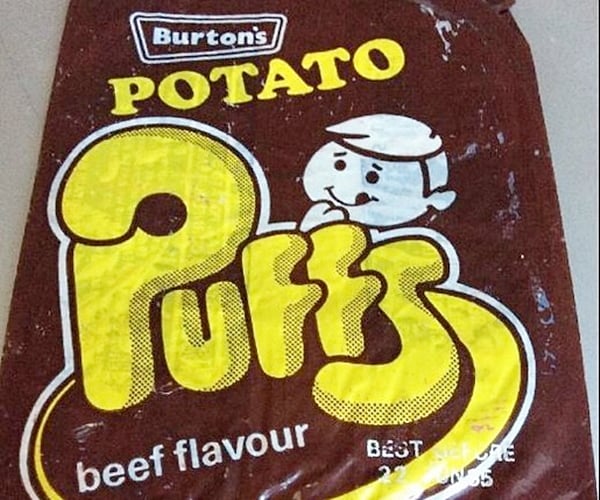 They may have been made up almost entirely of air, but we still enjoyed the melt in the mouth experience that came with eating a packet of Burton’s Potato Puffs.

These classic childhood treats seemed to disappear almost overnight in 2009, leading to disappointment being expressed by thousands of parents and children across the land. 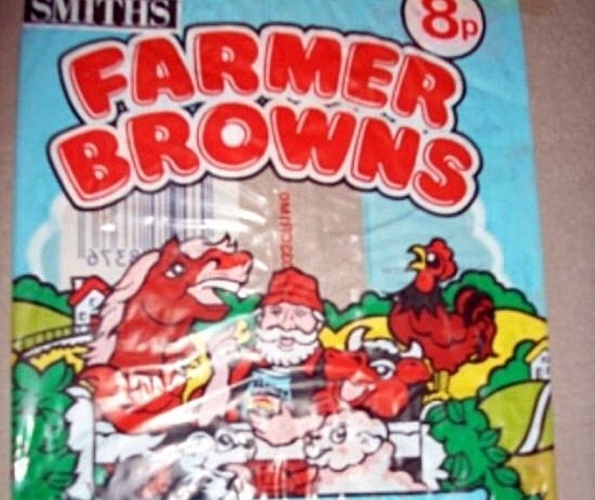 Another potato puff snack that seemed to vanish suddenly during our childhood were Farmer Browns crisps, which unsurprisingly came in the shape of different farmyard animals.

We also remember the advert for Farmer Browns crisps being extremely catchy, enticing us with a song that went “Farmer Brown you got a crunchy snack there, with lots of savoury shapes like me and you!” 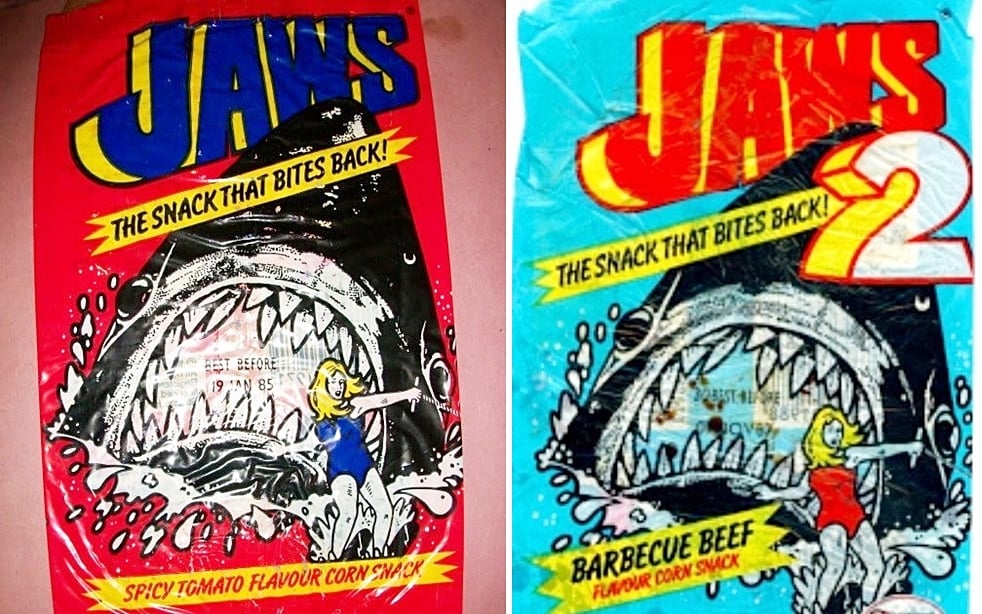 Whilst their promise of being “the snack that bites back” may now be considered false advertising, any crisp packet featuring a massive shark chasing a beautiful girl on the front was always going to entice us to sample its contents.

We’re not sure whether Jaws – or their follow up Jaws 2 – had any official affiliation with the classic film franchise, but we vividly remember snapping our teeth around these spicy tomato and barbecue beef flavoured treats. 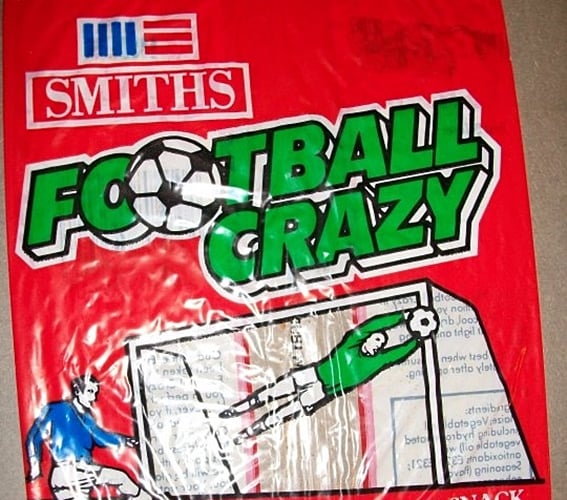 Originally available for the wonderfully retro price of four and a half pence were Smith’s Football Crazy crisps, which caught the attention of footie fans from far and wide.

Shaped like footballs and tasting a bit like bacon, these lunchtime snacks also promised a multitude of free gifts in the post if we sent off enough of our empty packets. 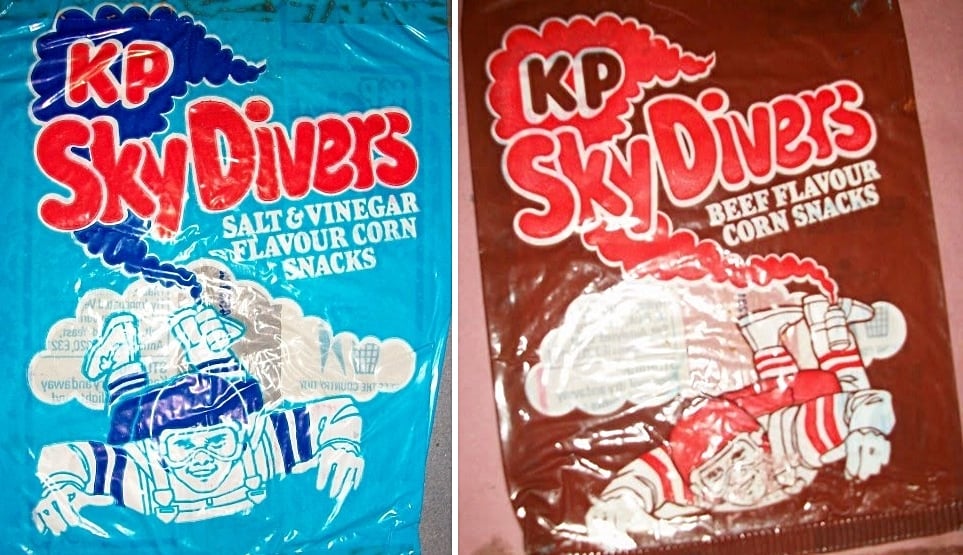 As their name would suggest, KP Skydivers came in the shape of men with their arms stretched out wide in a suitably skydiving pose.

We only ever remember sampling the blue coloured salt and vinegar variety, but we are assured that they came in a number of different flavours. 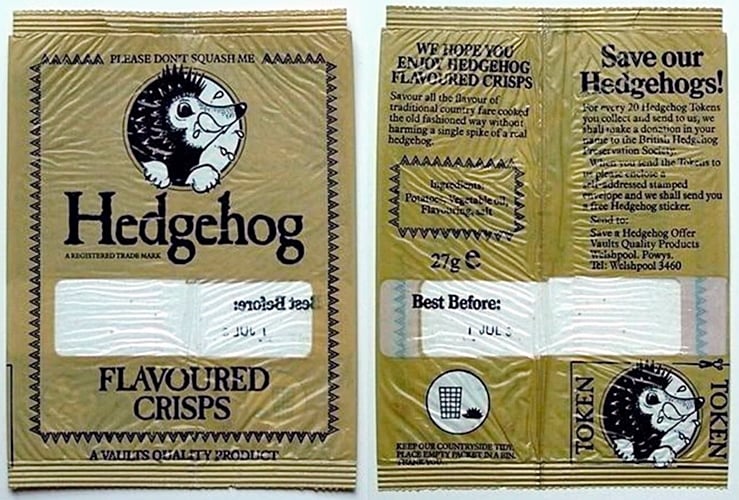 Yes, you weren’t dreaming, because there was once a variety of crisps that claimed to taste like everyone’s favourite spiky, nocturnal visitor the hedgehog.

Hedgehog flavour Crisps, which were developed by a British pub landlord at the start of the 1980s, were removed from sale after only a couple of years, when the Office of Fair Trading deemed that they breached the Trade Descriptions Act by containing absolutely no trace of hedgehog whatsoever. 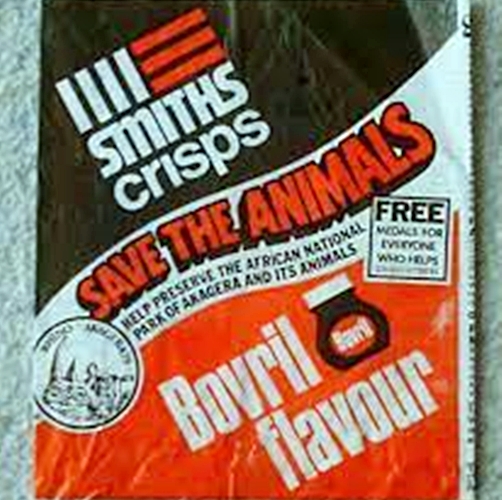 The thick, meaty taste of Bovril is loved by many 80s kids across the country, but do you remember the crisps that claimed to taste like the classic, salty paste?

Their beefy flavour was way too strong for us, but we were still tempted by the Bovril crisp packet, which encouraged us to ‘help preserve the African national park of Akagera and its animals.’ 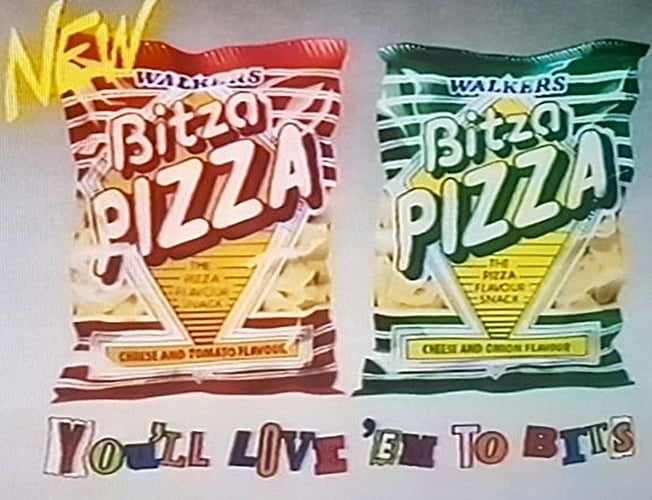 A TV advert promoted them with the claim “if you’re hungry dive in, they’re a real life saver, I’m in pieces for Bitsa Pizza!” and we loved the taste of these Italian-inspired crisps.

Walker’s Bitza Pizza, which could best be described as mini Doritos, came in a variety of flavours that were all inspired by popular Pizza toppings.