Being out of work, furloughed, or just plain stressed during the ongoing health crisis has led to streaming services reaping the rewards; in fact, Disney+ has lately doubled its subscriber count since staying indoors became the hottest new trend.

However, for some, simply watching the movies isn’t enough – and that’s the case for Fanni Kovács and Hosszú Norbert, a Hungarian couple who have delighted the internet with their low-budget recreations of classic movie scenes. Here are some of our 80s and 90s-themed favourites. 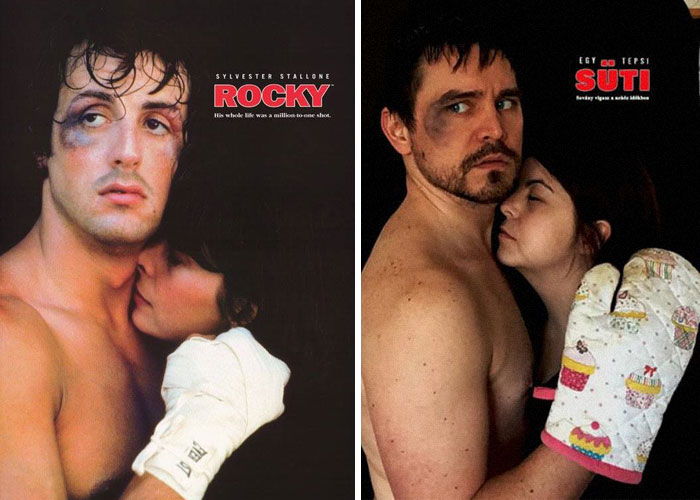 We might not be able to go running up those iconic Philadelphia steps, but putting an oven glove on your hand and looking wistfully out of frame has got to be the next best thing.

Never mind that Rocky was released in 1976 – we would have loved to see a recreation of 1985’s Stallone-Lundgren Rocky IV bout, but Fanni and Norbert couldn’t exactly ask Dolph to come over at a time like this. 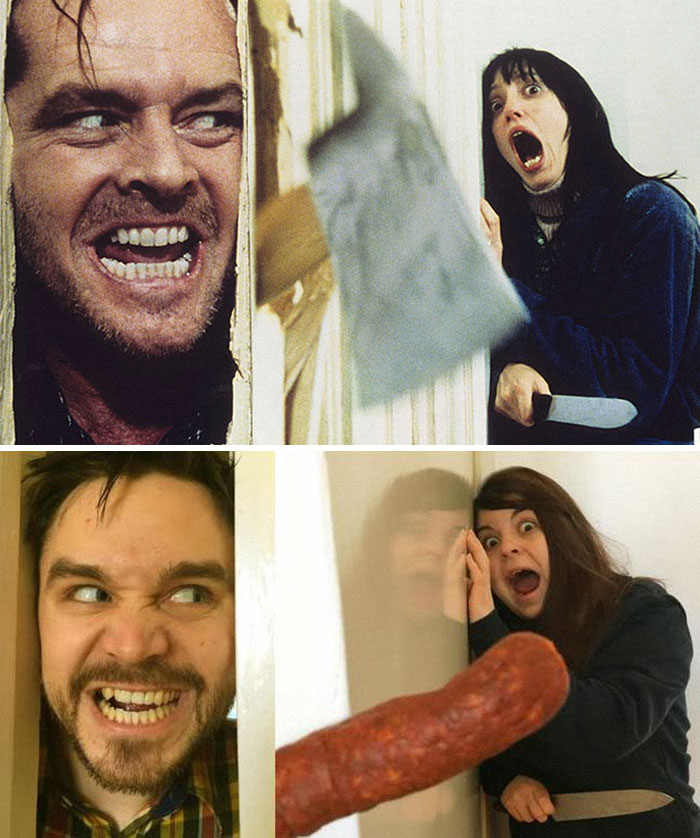 It’s a well-known fact that Stephen King disapproved of Stanley Kubrick’s iconic adaptation of The Shining, going so far as to later commission his own (TV) version of the famous horror story.

Whether King did so because he hated the famous axe scene, and whether he would have preferred Jack Torrance to wield a sausage, remains a mystery to this day.

Raiders of the Lost Ark 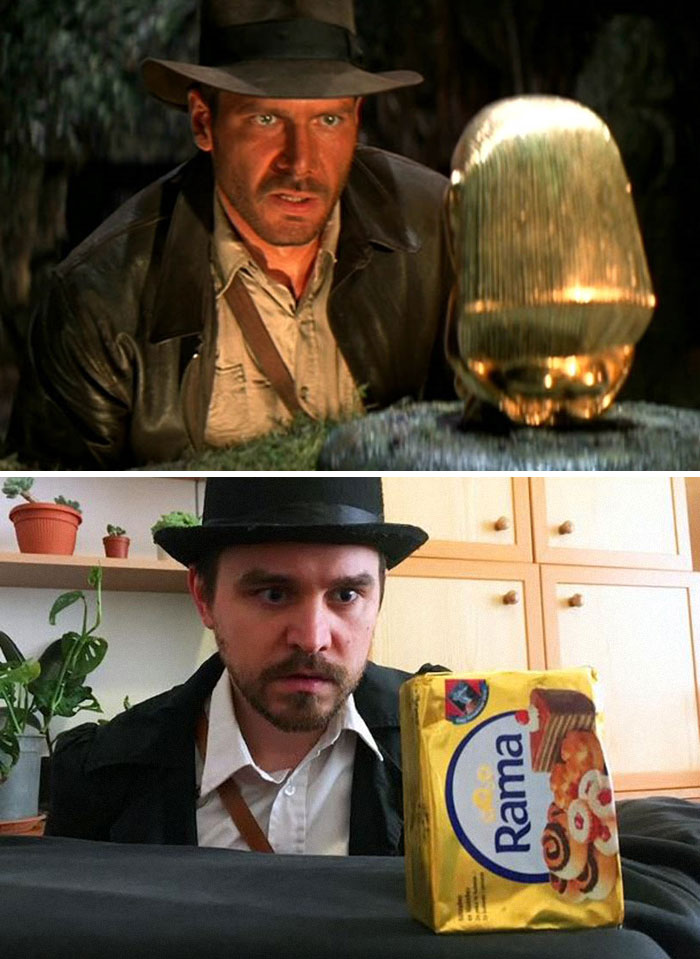 This iconic moment at the beginning of Raiders of the Lost Ark shows off just how daring Harrison Ford’s Indiana Jones can be.

Happily, the artifact that Indy risks his life for is overwhelmingly more valuable than Rama, a Hungarian brand of butter.

The Silence of the Lambs 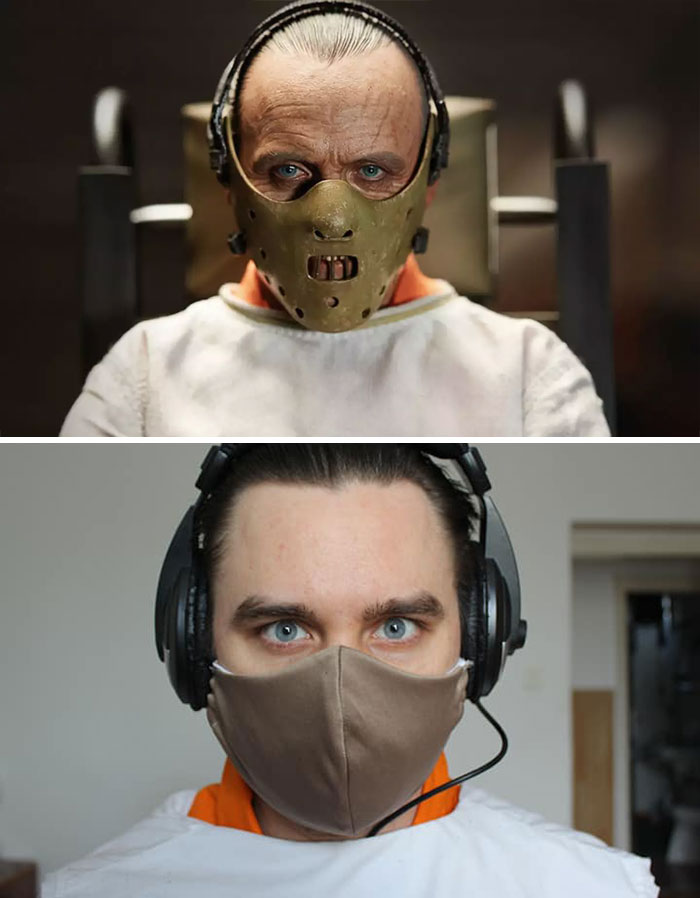 Doesn’t Norbert have lovely eyes? Especially when he’s impersonating a famous serial killer and cannibal, as portrayed by the equally blue-eyed Anthony Hopkins.

In fact, Hannibal Lecter was practising social distancing and the wearing of face masks long before it was cool. 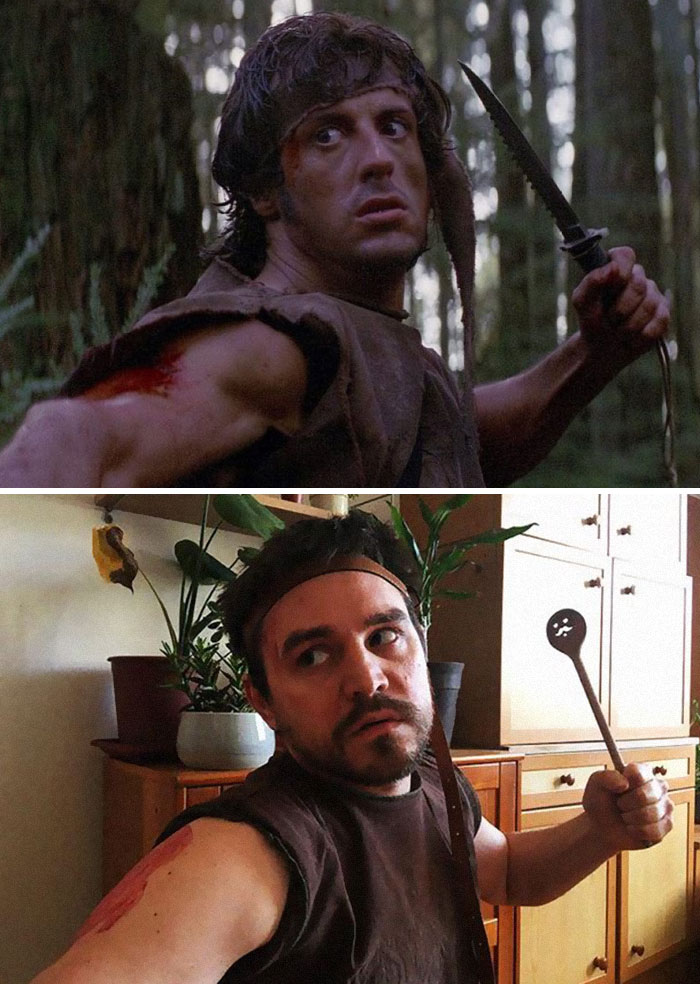 Sylvester Stallone’s jungle warrior is a bonafide 80s icon – but when you’re stuck in your house, some potted plants are the only real foliage on offer.

A remake of First Blood is exactly the kind of thing that would help at a time like this (and if Rambo were to wield a mustachioed slotted spoon, even better). 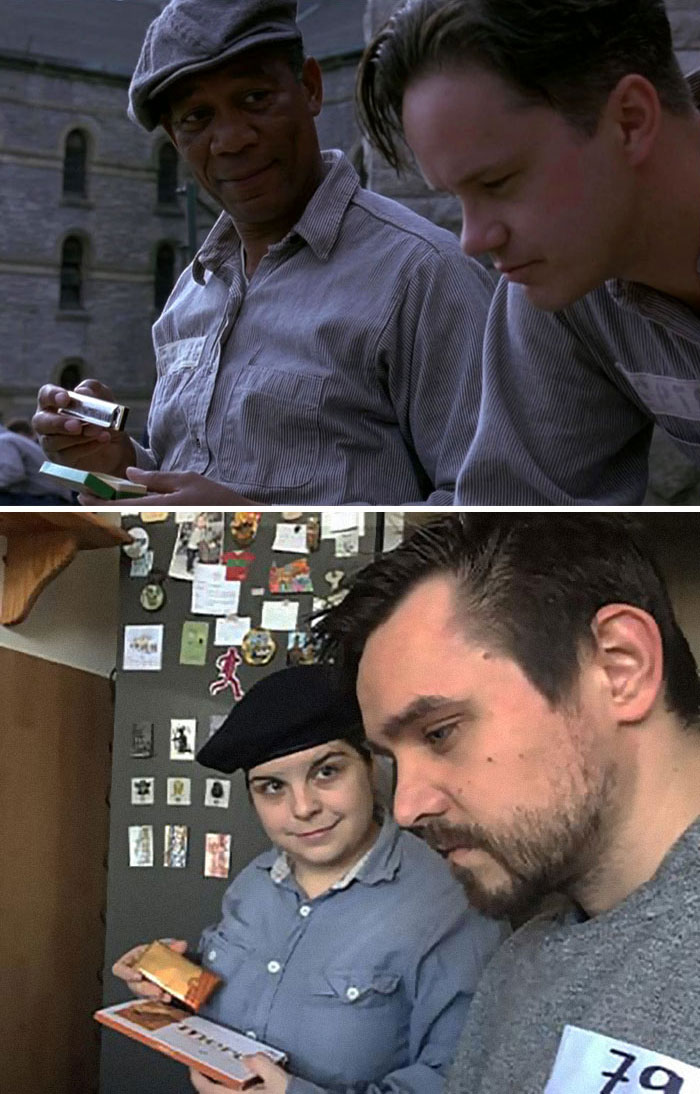 The world right now can sometimes feel like The Shawshank Redemption, but at least we won’t have to use Tim Robbins’ less-than-sanitary escape route.

Until the day we’re allowed out of this blasted prison, we’ll just have to sit mournfully by the fridge and wear the closest thing we own to a flat cap. We don’t make the rules. 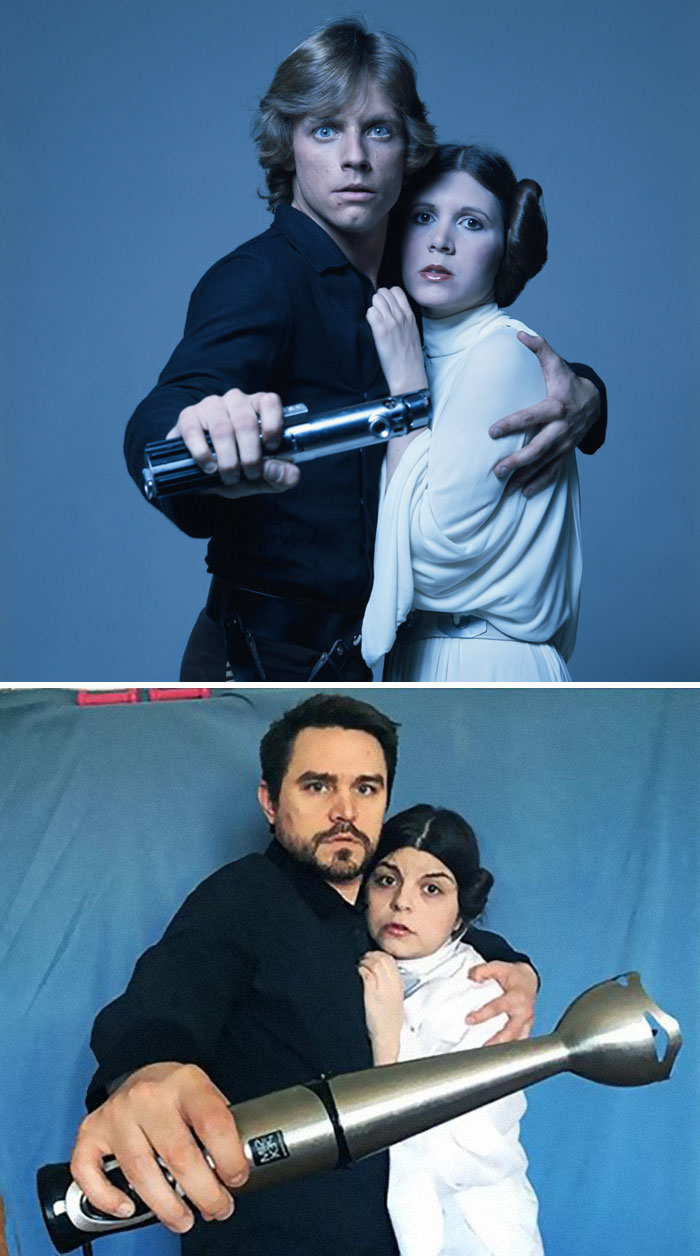 Mark Hamill and Carrie Fisher made for one of cinema’s most iconic duos, and pop culture’s second-greatest set of twins after Arnold Schwarzenegger and Danny DeVito.

Still, isn’t it somewhat in bad taste to replace a lightsaber with a hand blender? Luke Skywalker’s already down a few digits. 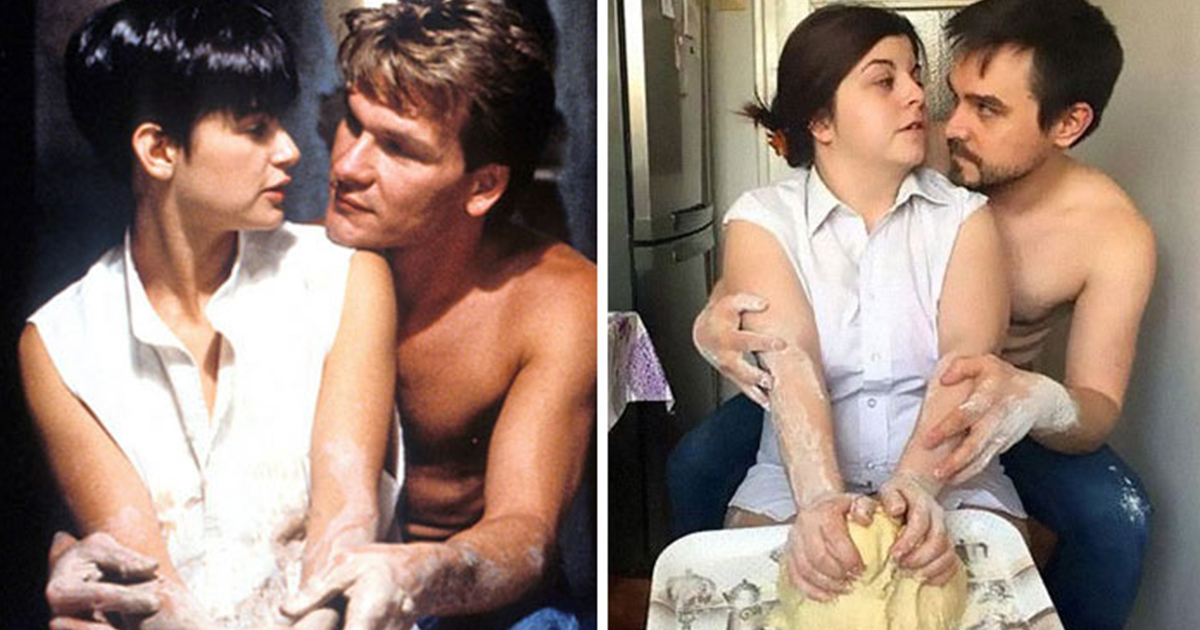 It’s one of Patrick Swayze’s most famous roles, and one which took on a greater poignancy after his unexpected death in 2009. But just because Ghost’s most romantic moment involves specialist pottery equipment doesn’t mean Fanni and Norbert didn’t give it a go.

Kneading dough isn’t quite as romantic as pottery, for some reason, but at this point we’ll take any love story we can get. 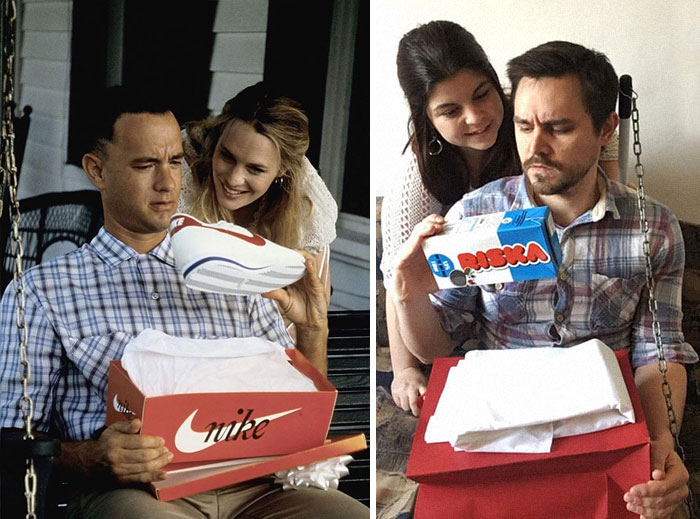 Forrest Gump is Tom Hanks at his lovable best, and Robin Wright is his effortlessly hateable sweetheart. But you know what’s missing from the 1994 classic? Hungarian chocolate milk, that’s what.

Product placement is nothing new in cinema, but brands like Nike seem to get all of the ad space. Spread the chocolatey love, Hollywood! 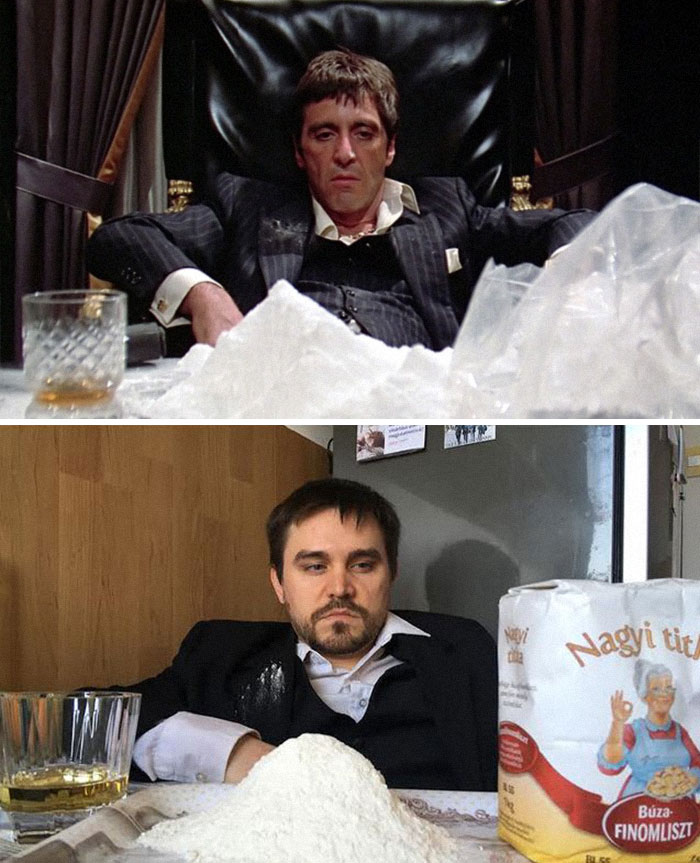 Next to The Godfather, Scarface is one of Al Pacino’s all-time greatest and inimitable performances. At least, that’s what we thought until Norbert gave us his version of the drug-addled gangster.

Naturally, the low-budget version of Scarface sits atop an empire founded on baking goods and apple juice. It’s fun for all the family! 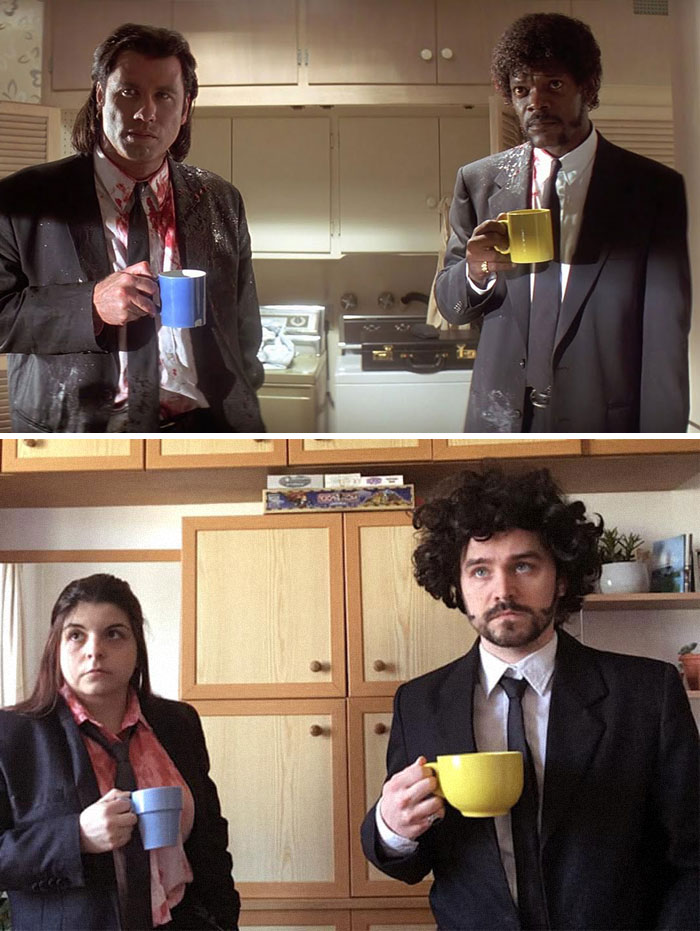 Big props for the props on this one – who knew that having such mismatched crockery would someday come in handy? 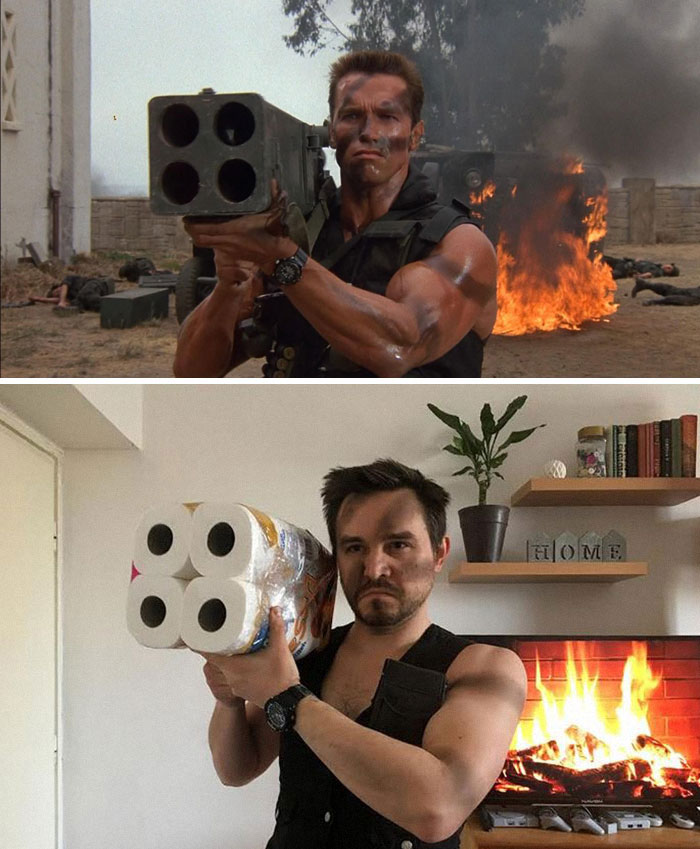 The coolest heroes don’t look at explosions – or, as the case may be, relaxing videos of log fires crackling in the hearth.

What’s less cool is Norbert’s apparent willingness to use toilet paper as ammunition. Doesn’t he know that we’re in the middle of a crisis? Use a standard household rocket launcher like everyone else.