Yes, Con Air Really Was Based On a True Story

Nicolas Cage movie Con Air is fondly remembered for sporting some of the most ridiculous, over-the-top action of the 1990s – so it may come as a surprise that the testosterone-heavy Jerry Bruckheimer romp took inspiration from reality.

Incredibly, Con Air was modelled on the real Justice Prisoner and Alien Transportation System, which transports thousands of convicts across the US every year. However, while the movie depicts a group of deadly criminals taking over a plane, nothing so exciting has ever happened on the real ‘Con Air’.

Con Air casts Nicolas Cage as Cameron Poe, a US Army Ranger imprisoned for killing a man whilst defending his wife. After eight years behind bars Poe, is set for release, and takes a ride home on a prisoner transfer plane overseen by US Marshall Vince Larkin (John Cusack). However, all hell breaks loose when the plane is seized by a gang of convicts led by John Malkovich‘s Cyrus ‘The Virus’ Grissom.

The initial inspiration behind the film was, perhaps surprisingly, a newspaper article. (This was not a new creative approach for producer Jerry Bruckheimer, whose 1986 blockbuster Top Gun was inspired by a piece in California magazine.) Entitled When Jailbirds Fly, They Always Use Con Air, the 1993 Los Angeles piece by journalist Eric Malnic introduced readers to what was then known as “the Air Operations Division of the U.S. Marshals Service, which is known in the trade as Con Air.”

Readers were informed that the US Marshals Service “flies more than 56,000 prisoners around the country every year for court appearances, medical examinations and prison transfers.” These words would be repeated almost verbatim in Con Air the movie, but with the number of prisoners increased to 155,000, as the division had grown exponentially in the four years between the article’s publication and the film’s release in 1997.

The ‘Con Air’ service originated in Oklahoma in 1985. Before this time, transporting prisoners long distances was a costly and often risky business, with prisoners sometimes taken on conventional commercial airlines under guard (as is the case in another 90s airborne action movie, Passenger 57). Then the US Marshals Service found themselves in possession of a plane courtesy of the Federal Aviation Administration.

It was decided this vehicle would be used to transport prisoners en masse. This proved so successful that in 1995, the Air Operations Division merged with the air fleet of the Immigration and Naturalization Service to form the the Justice Prisoner and Alien Transportation System, or JPATS, which transported illegal aliens as well as convicts.

Many details of the 1993 LA Times article will sound familiar to Con Air viewers. As in the movie, the prisoner transfer planes steer clear of major commercial airports, instead transferring between remote minor airfields. On the ground, the convicts are slowly escorted under the watchful eye of “a dozen trim federal Bureau of Prisons guards… faces impassive, eyes watchful behind reflective sun glasses, shotguns held at the ready.” 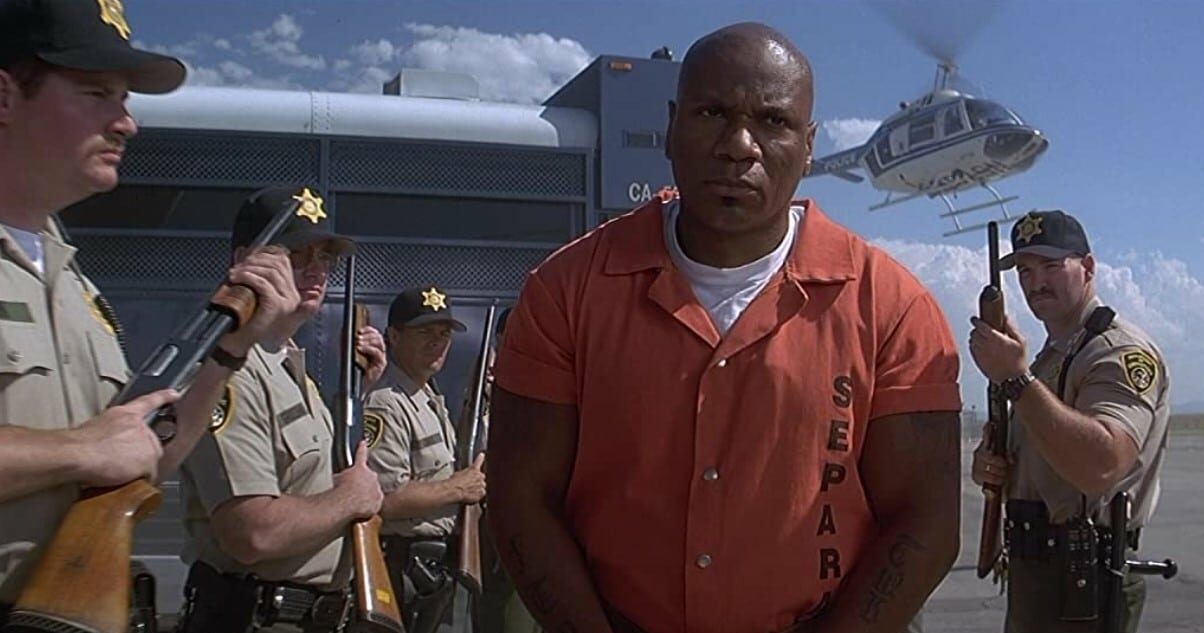 In addition, the journalist details “body searches to look for hidden contraband. There were the shackles – handcuffs attached to waist chains, leg irons on each ankle – that forced the inmates to shuffle slowly along.” All this perfectly describes the scenes as they unfold in the final movie, aside from one key detail: “Orders were issued quietly and obeyed without dispute.”

Once on the plane, the passengers could look forward to “no movies to watch, magazines to read or pillows to make a nap more comfortable. Window shades stay up, seats don’t recline and tray tables are stowed even when lunch is served… [they] must receive permission to use the lavatory.”

All this found its way into the Con Air movie in some form. For research, screenwriter Scott Rosenberg spent three days travelling alongside real prisoners on the real Con Air, whilst closer to production the writer joined Cage, Bruckheimer and director Simon West on a visit to the notorious Folsom maximum security penitentiary in Sacramento, where Rosenberg recalls, a convict “came up to Nic and said, ‘Holy cow, it’s really you… Jerry Seinfeld!’”

Of course, blockbuster movies aren’t renowned for being too close to reality. Whilst Rosenberg’s initial script presented the Con Air system in a largely true-to-life manner, some significant liberties were taken. Most notably, no jailbreak had ever occurred on board on the real Con Air.

As marshal Frank Kolacz told the LA Times in 1993, “There’s never been a successful escape attempt on Con Air… If they cause trouble, we put cargo straps over them or tape their hands around tennis balls. If they bite or spit, we put pantyhose over their heads.”

Still, Kolacz admitted the convicts “keep their minds active, thinking about how to escape. If you’ve got a life sentence, why not?” It’s not inconceivable, then, that a convict as intelligent and resourceful as Cyrus Grissom might hatch a grand escape plan. However, Cyrus’ plan in the movie hinges on the convicts knowing precisely where the plane is set to land. In reality, this information is kept top secret.

Nor was this the only detail the filmmakers knowingly got wrong. Based on the movie, you might imagine the real Con Air to be a rickety old plane with the legend ‘Jailbird’ painted on the outside, with interior akin to a Gothic asylum. In truth, JPATS uses the far more commonplace Boeing 747, which at a glance looks no different from a commercial airliner inside and out.

Producer Bruckheimer remarked that because they “added some drama and stretched reality a little bit,” the US Marshal Service wouldn’t co-operate with the production as they objected to the jailbreak plot.

This, it seems, left the filmmakers free to go as out there as they wanted, hence the resulting film features the plane dragging a car through the sky, a disaster movie climax that destroys most of the Las Vegas Strip – and, of course, Cage’s memorable demand to “put the bunny back in the box.”

Of course, cinema-goers couldn’t have cared less how true Con Air was to reality. The film’s outrageous action went down a storm with audiences, and it raked in $224 million at the box office. All these years later, Con Air is still fondly held up as one of three essential Nicolas Cage action movies, alongside The Rock and Face/Off.

As for the real Con Air, it’s still going strong. Immediately after the 9/11 attacks it was the only civilian air service still allowed in US airspace, and as of 2022 it has four planes, three hubs (in Las Vegas and the Caribbean) on top of its Oklahoma HQ, and transports 260,000 convicts and detainees a year.