Beloved Australian soap opera Neighbours, which came to an end in July 2022 after 37 years on the air, had its share of off-the-wall moments. There was Susan Kennedy’s amnesia, Toady’s exploding wedding and a character-culling plane crash, to name but a few.

Arguably no scene in the tenure of the Aussie soap went quite so far out there, though, as the time the show took us into the mind of sleeping dog Bouncer and showed us his dream. Here’s the story of how the outlandish scene came into being. 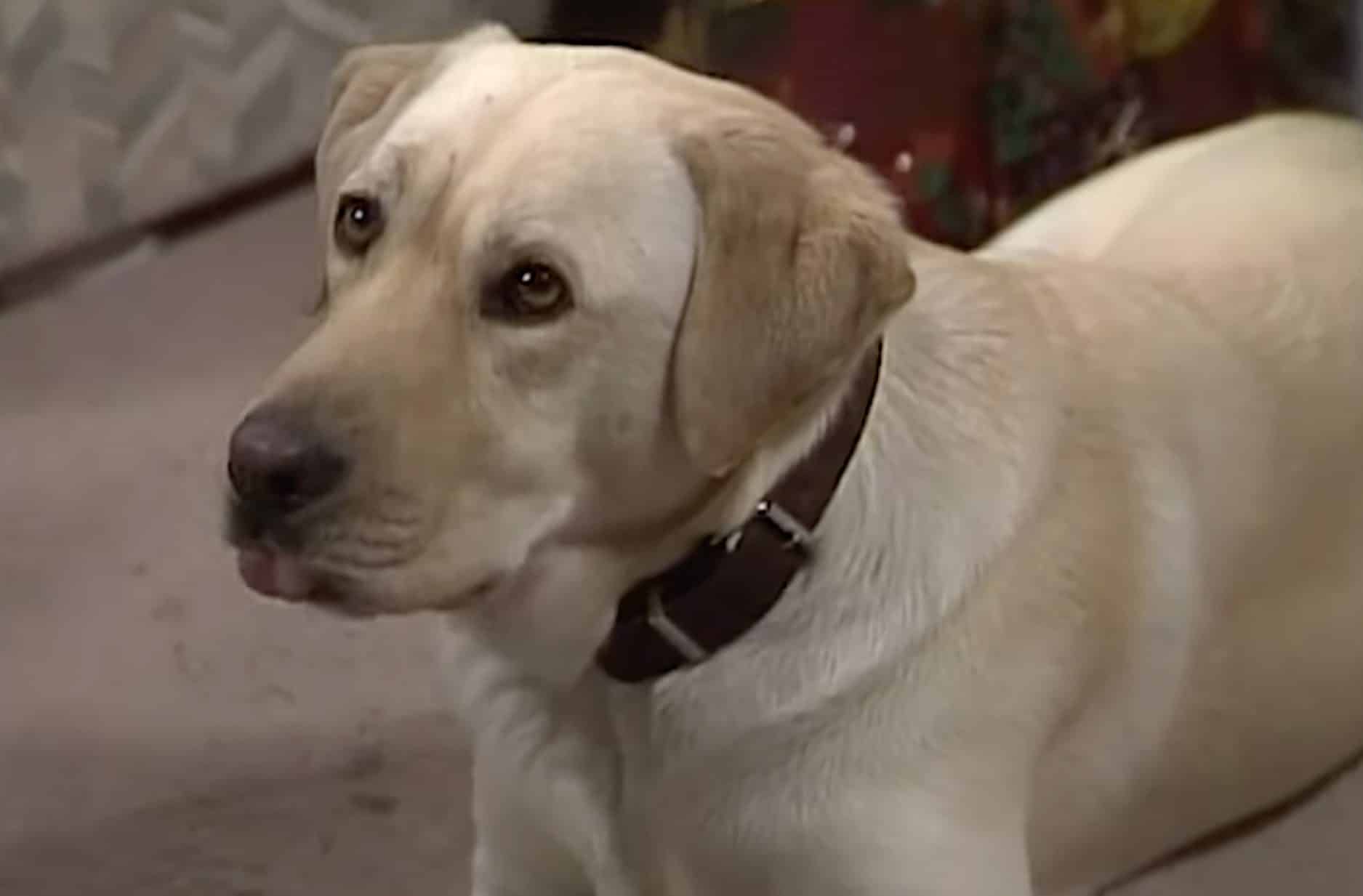 Bouncer was introduced in the 408th episode of Neighbours, on 4 February 1987, two years after the show had begun airing. A Labrador retriever, Bouncer the character was given the very same name as the dog who portrayed him, under the guidance of trainer Luke Hura.

One year old at the time of his screen debut, Bouncer was initially the pet of Lucy Robinson (originally portrayed by Kylie Flinker, and later by Sasha Close and Melissa Bell). Lucy was given Bouncer by Mike Young (Guy Pearce), who gifted her the puppy to make amends for failing to save Lucy’s previous pet dog from drowning.

When Lucy left Ramsay Street, Bouncer returned to Mike’s care; yet while Mike may have been a dog lover, the same wasn’t true of Guy Pearce himself. After two years, the future Hollywood star refused to shoot any further scenes with Bouncer due to his dislike of dogs. 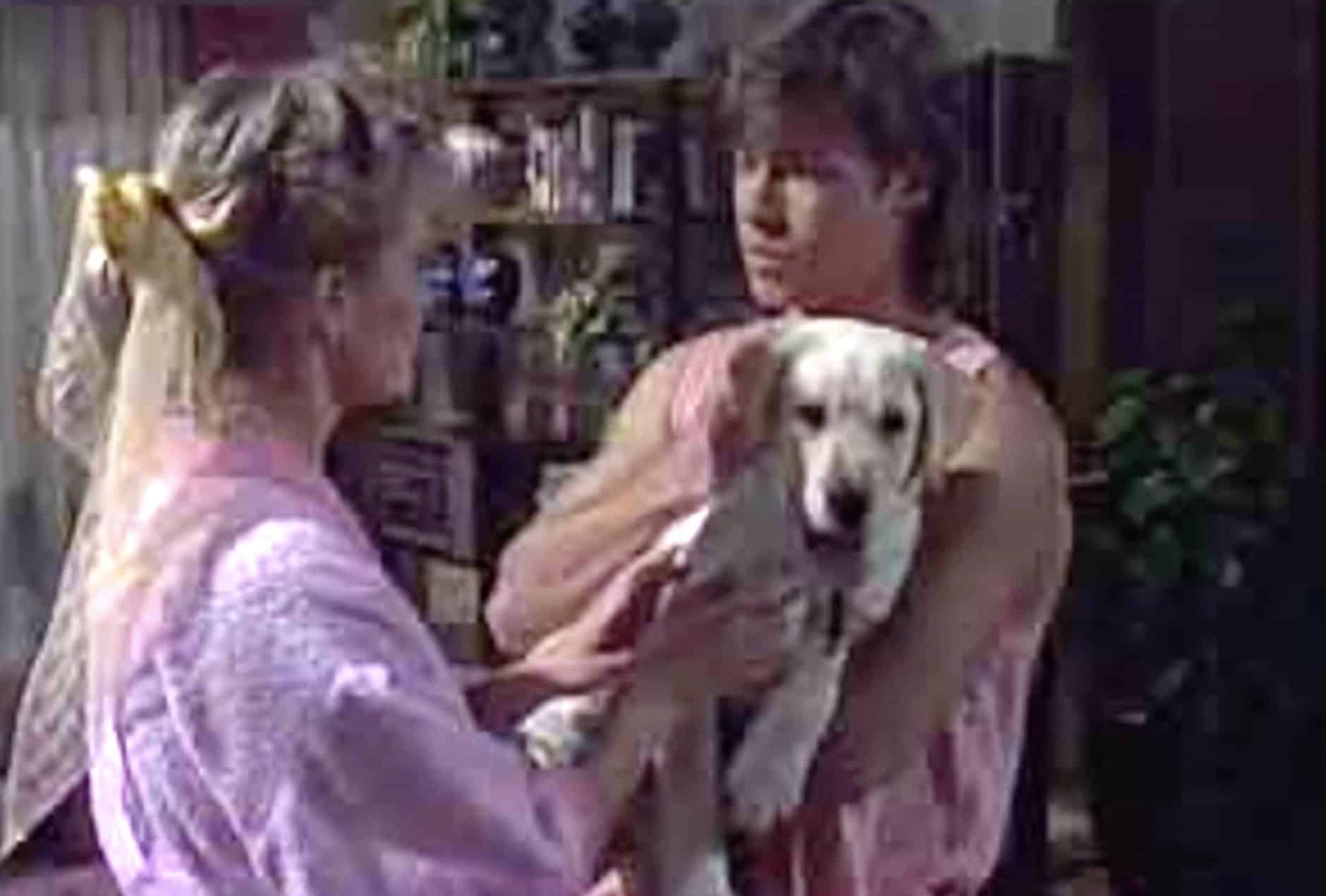 Although he insisted that Bouncer was a “great dog”, Pearce said at the time, “I had to tell them to take him away from me. You won’t see Mike patting Bouncer again.” Pearce left Neighbours in 1989, and – after a short stint on rival soap Home and Away – he went on to become one of the most successful film actors the soap ever produced.

Still, Mike’s departure from Neighbours didn’t mean Bouncer was leaving too. For a time he went into the care of Mrs Mangel (Vivean Gray), then when she too left Ramsay Street, Bouncer became the pet of her son Joe Mangel (Mark Little), and was particularly doted on by Joe’s young son Toby (Ben Geurens).

By this point, Bouncer was one of the most popular Neighbours characters, and reportedly earned a bigger salary than some of his human co-stars (the dog was valued at between $100,000 and $200,000). 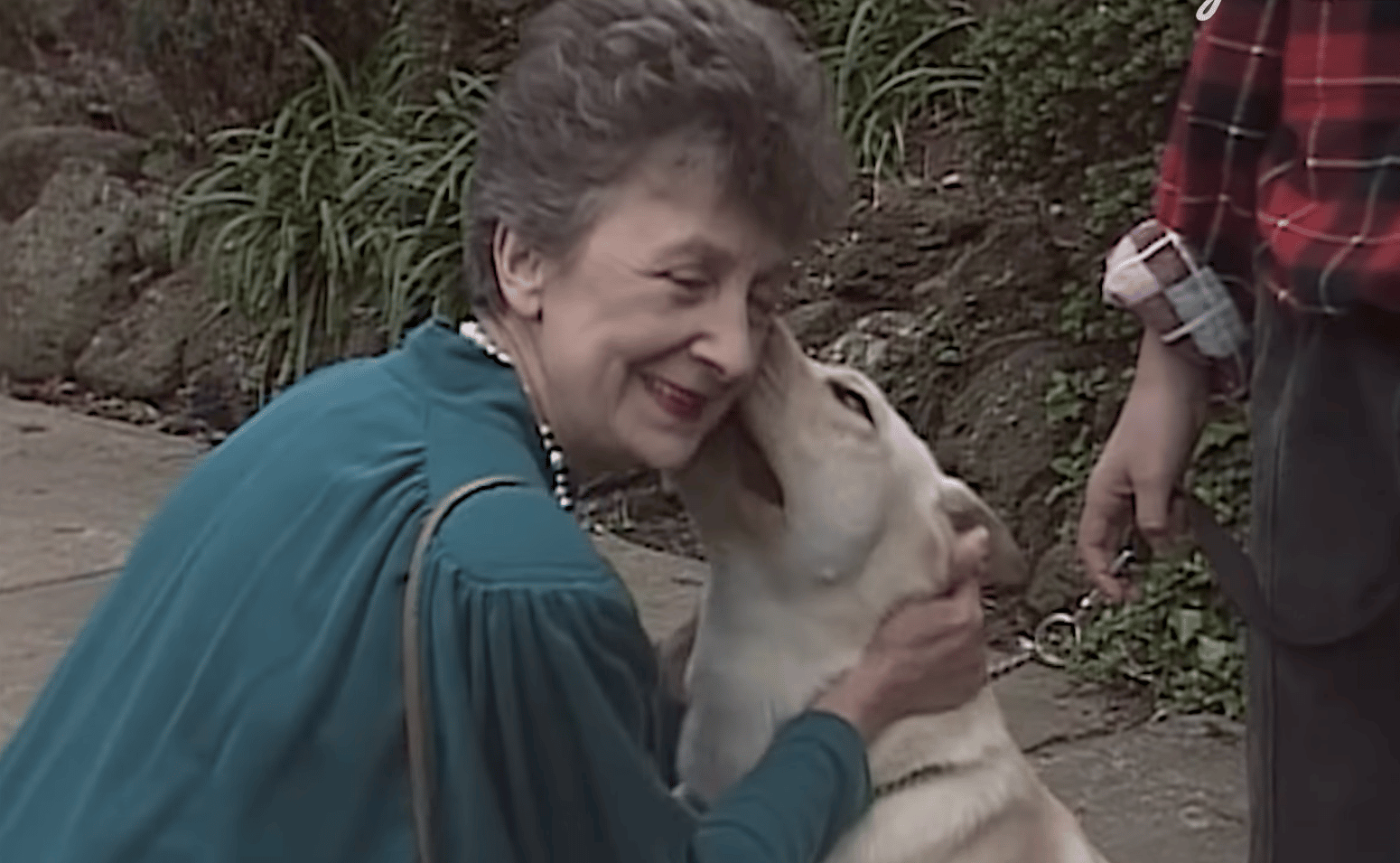 It didn’t go unnoticed that Bouncer enjoyed particular popularity with the show’s younger viewers. This led Peter Pinne, then an executive producer on the soap, to pitch an idea which proved to be, for better or worse, one of most memorable moments in Neighbours history.

Episode 1,254 (first broadcast 6 September 1990) sees the Mangel family – Joe, Toby, Bouncer and Kerry (Linda Hartley-Clark) – watching Joe and Kerry’s wedding video. Bouncer seems to take a particular interest in the video, barking happily, to which Kerry remarks, “you can say that again, Bouncer. Looks like you and I are the only real romantics in this household.”

At this time on the show, Bouncer had been enjoying a romance of his own with the neighbours’ Border Collie, Rosie. Toby remarks that he thinks Bouncer wishes it was him and Rosie getting married, saying, “all he does these days is sit around and dream about her.” Toby’s father Joe expresses scepticism at this, insisting, “dogs don’t dream, Tobe. And if Bouncer did, I reckon he’d dream about a nice, big, juicy T-bone.” 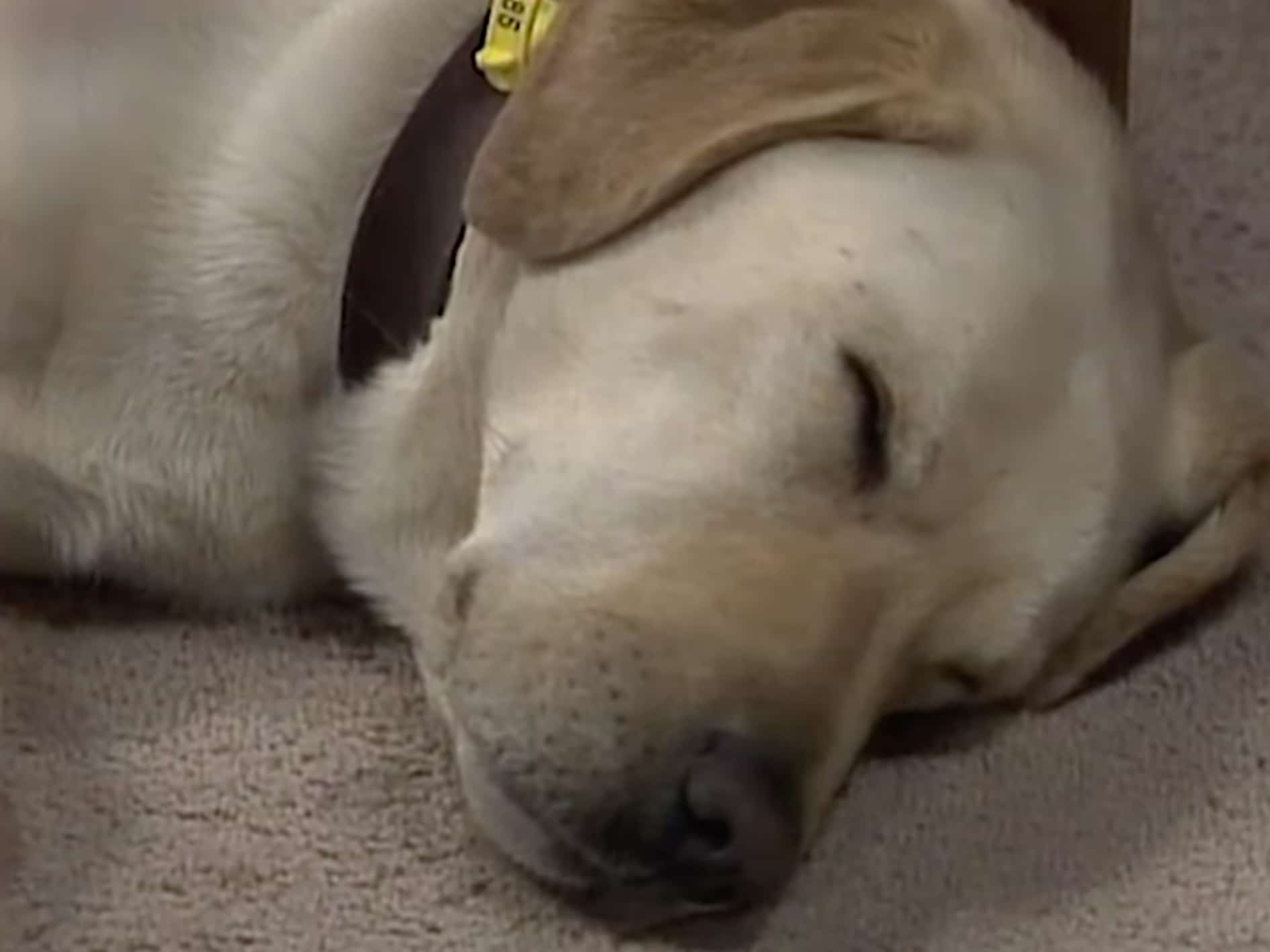 However, as Bouncer lies sleeping on the ground, the camera slowly zooms into his sleeping face, and then, as fairy tale-esque music swells, we cross-fade to what looks like the set of a children’s TV show. In front of a backdrop of artificial flowers, streamers and a painted hillside, Bouncer and Rosie sit lovingly side by side.

It seems Bouncer is indeed dreaming of their wedding: the male dog looks dashing in a bow tie, and shows his affection for his mate by repeatedly putting his paw on her head.

As the scene progresses, we see Bouncer and Rosie sitting together in a kennel marked ‘Home Sweet Home’ while a litter of puppies plays around the artificial landscape before them. Then the camera pulls back out, cross-fading back to the sleeping Bouncer. 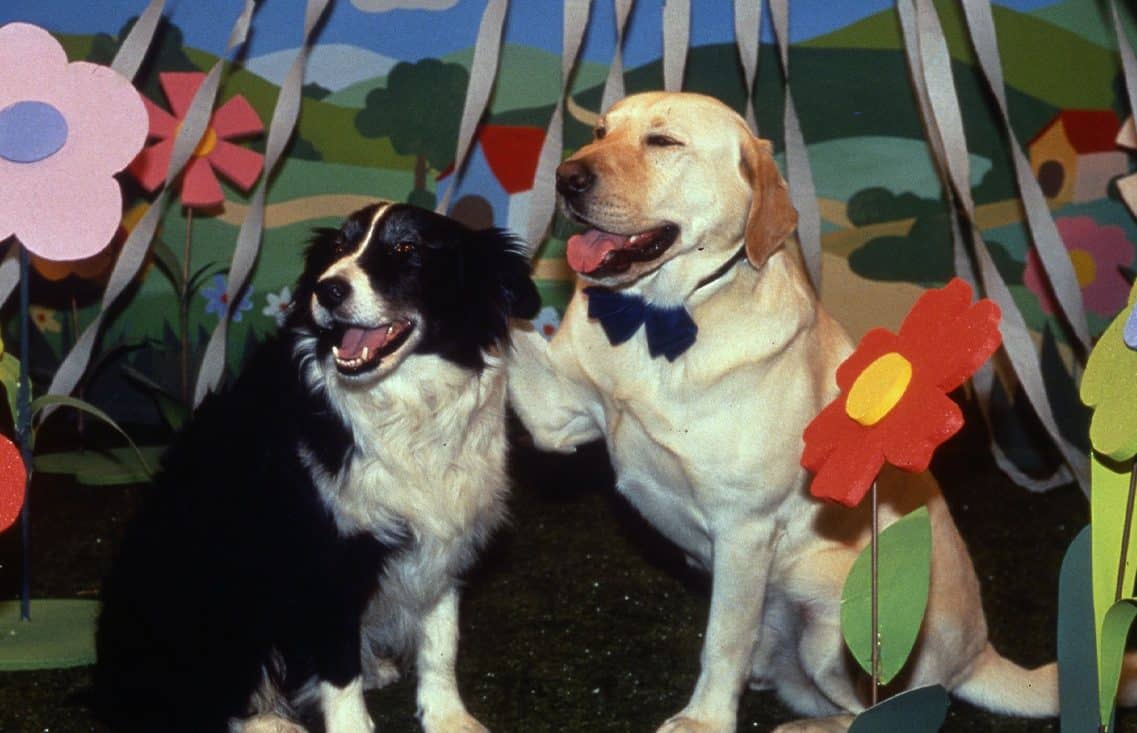 Naturally, not everyone involved in Neighbours was happy about the Bouncer dream scene. Madge Bishop actress Anne Charleston has since said “The whole cast was mortified… It reduced [Neighbours] to a three-year-old’s programme. It was very strange.”

Charleston later remarked, “he was a gorgeous animal, he really was, but fancy putting him through that. He must have been embarrassed as well.”

By contrast, Karl Kennedy actor Alan Fletcher has (perhaps with a hint of sarcasm) declared Bouncer’s dream to be “one of the greatest pieces of television ever created.” Executive producer Jason Herbison diplomatically described it as one of the show’s “heightened storylines…incredibly soapy, but we grounded it in a lot of fantastic performances.” 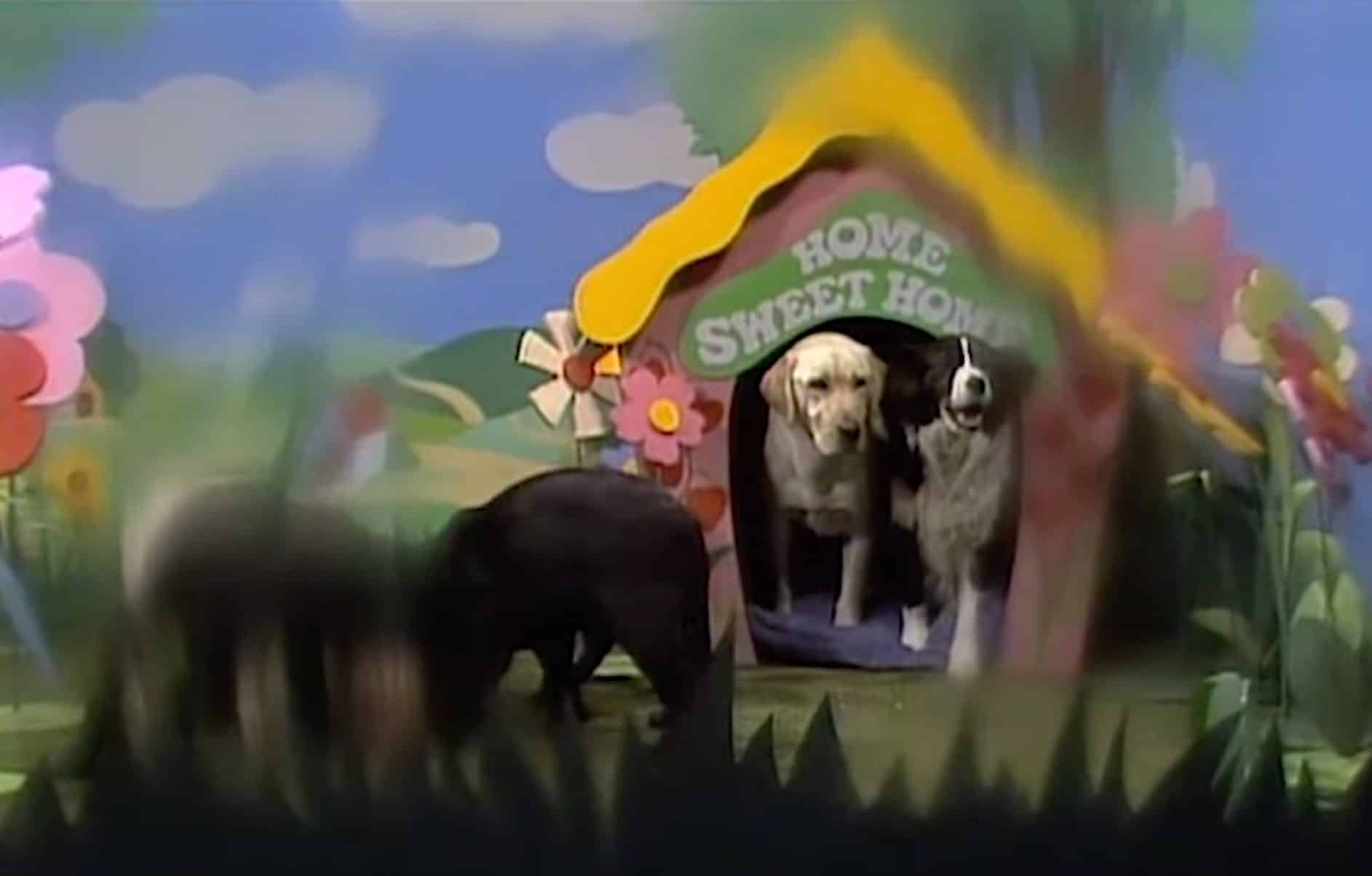 Executive producer Peter Pinne (who came up with the sequence in the first place) said years later that writer-producer Jason Daniel, who co-wrote episode 1,254 with Reg Watson, “has never forgiven me for making them do Bouncer’s Dream… Of course it was a silly idea, but it got covers in all the TV magazines and rated.”

Dreaming dogs were not entirely unheard of on 90s television; American cartoon series Potsworth and Company (aka Midnight Patrol: Adventures in the Dream Zone) saw a group of young friends go on dream world adventures with their pet dog.

However, never before or since have we had such a bizarre story device in an otherwise grounded live-action TV drama that is not primarily aimed at children. 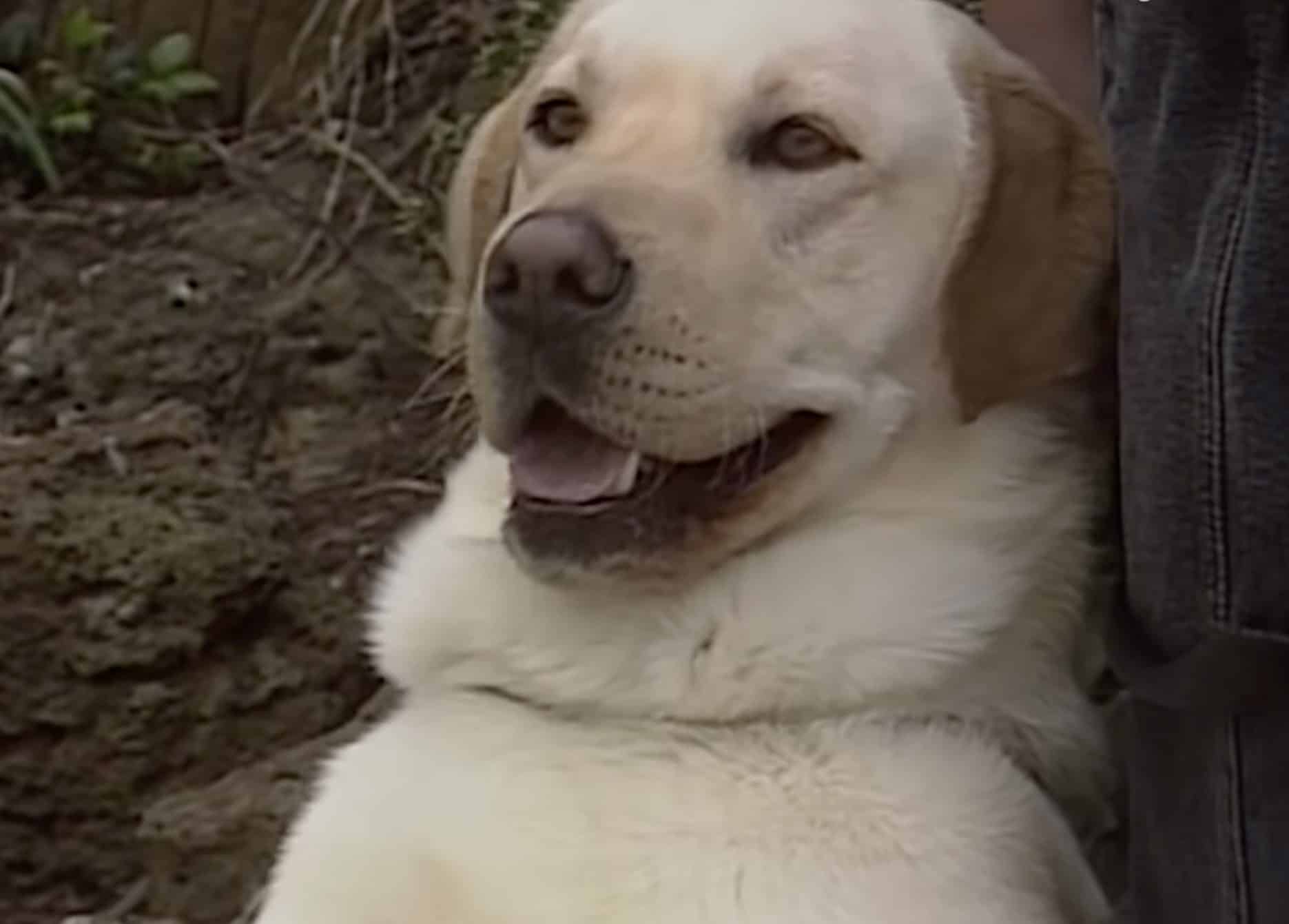 After going on to save Madge Bishop and Sky Mangel from a house fire (even though Madge had once hit him with her car), Bouncer left Ramsay Street for good in February 1993 after six years on the show.

Sadly, the real-life Bouncer died of cancer only 13 weeks after his time on the soap ended, resulting in an outpouring of grief from fans around the world. Harold Bishop actor Ian Smith later admitted “the death that hurt me more than all the others was Bouncer…It really affected us all something awful.”

Still, while Bouncer was gone he was certainly not forgotten. In 2015, a new Labrador came to Ramsay Street dubbed Bouncer 2 (or B2 for short). Then, in the last episodes of Neighbours in 2022, Shane Ramsey (Peter O’Brien) revealed that he had named his car Bouncer, in tribute to “a mate’s old dog.” 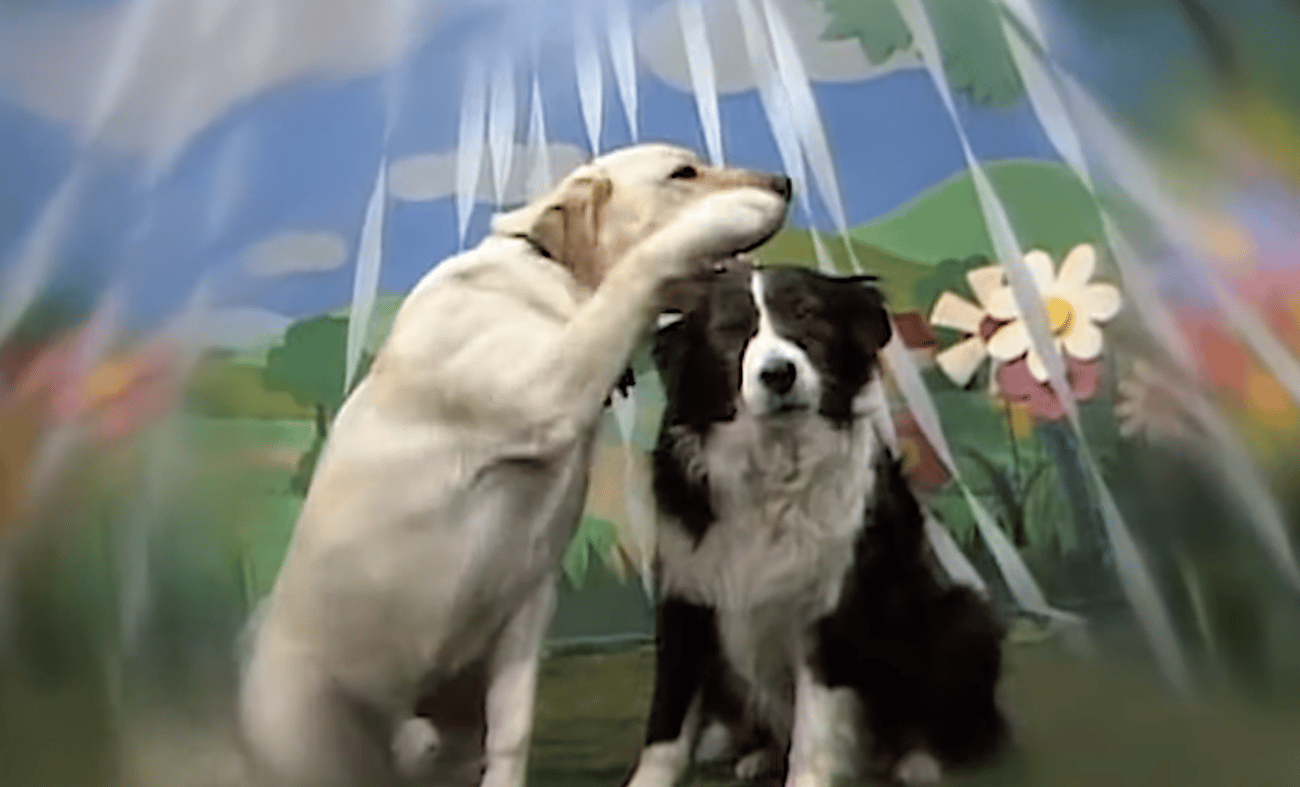 A still image of the beloved Bouncer was even included in the final moments of the very last Neighbours episode, and a montage of classic Neighbours moments even had a quick flashback to that unforgettable dream sequence.

As the show wrapped up, 32 years after a sleeping Bouncer imagined a life with Rosie, some fans speculated that Neighbours would turn out to have been Bouncer’s dream all along. It’s proof that, divisive as it was, the scene remains an utterly unforgettable part of Neighbours history.