Ask anyone on the street who Billy Zane is, and you’ll likely hear mentions of Caledon Hockley in Titanic; Hughie Warriner in Dead Calm; the titular role in 1996 superhero movie The Phantom; or perhaps even his hilariously self-deprecating cameo in Zoolander. What you might not have realised, however, is that Zane made his acting debut much earlier, and in one of the most iconic movies of the 1980s.

You may not have given Biff’s fresh-faced cronies in Back to the Future a second glance, but among them was Billy Zane, making his acting debut in a role that would kickstart a career of more than 100 screen credits to date. 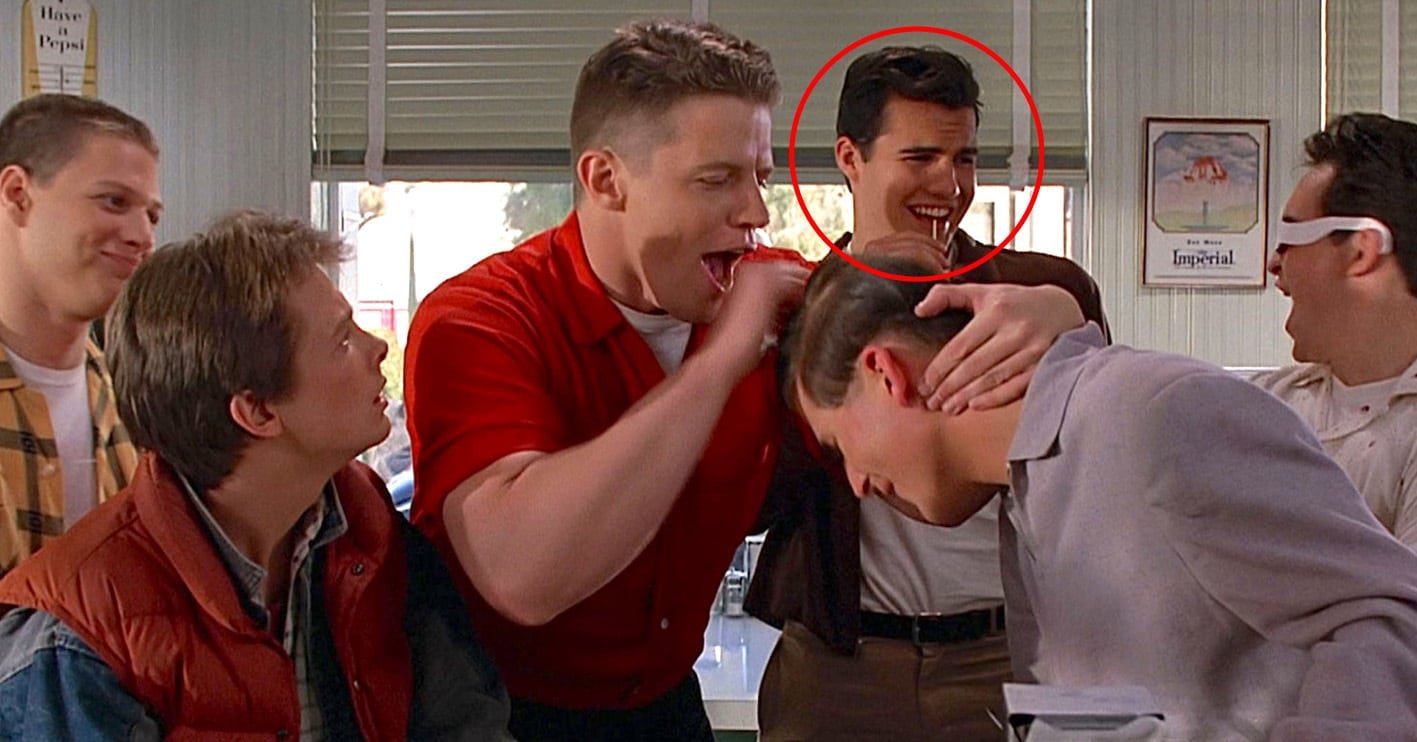 Born in 1966 and raised in Chicago, Billy Zane was the son of professional stage actors Thalia and William George Zane Sr. After attending summer acting camps, the teenager decided to try following in his parents’ footsteps.

When he turned 18, Zane planned to spend a year in Hollywood, soaking up the atmosphere, before attending acting school. But in a stroke of luck that many budding actors would kill for, a mere two weeks after his arrival Zane scored an audition for what would become a particularly famous movie. 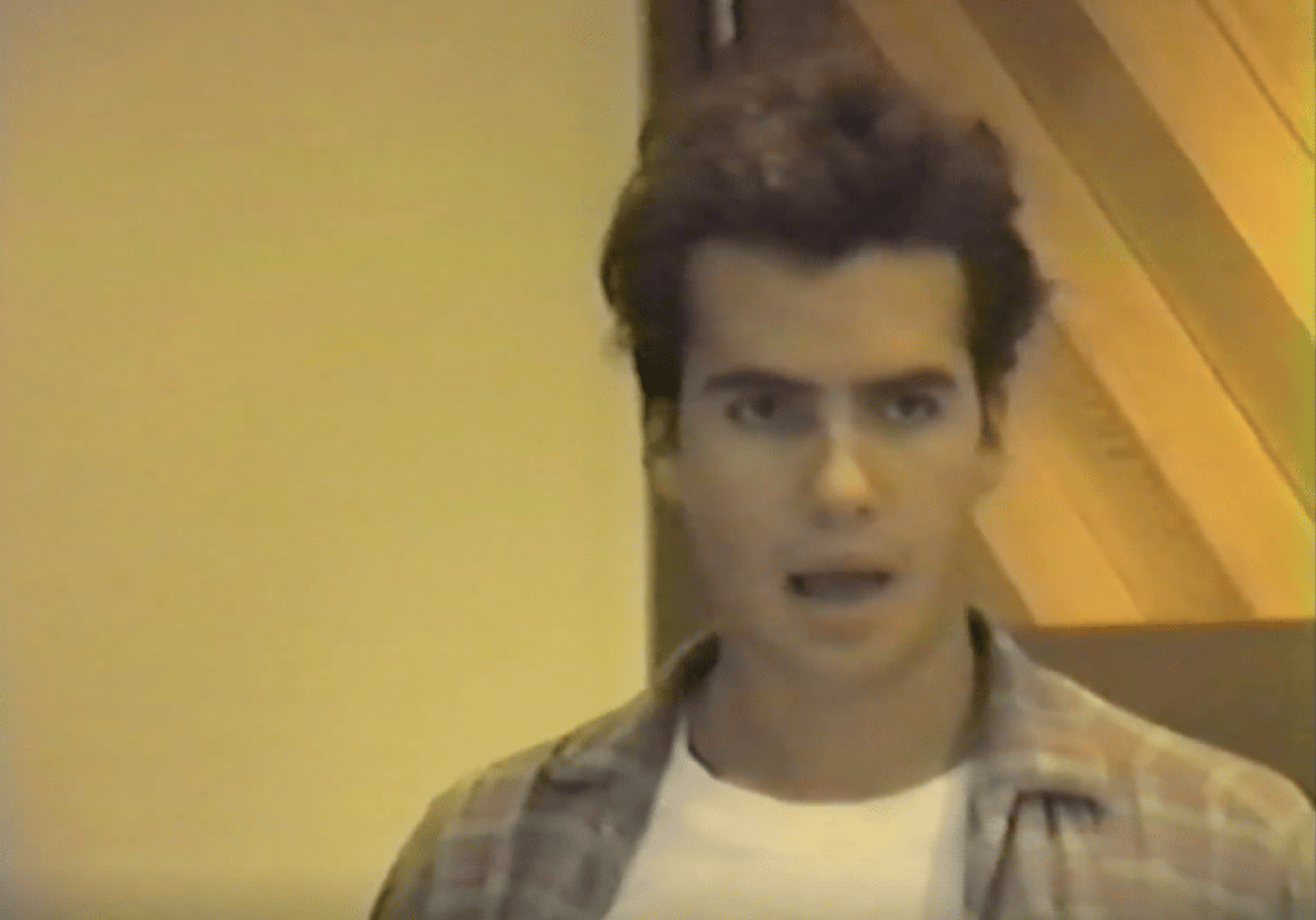 Put up for the role of bully Biff Tannen, Marty McFly’s nemesis, Zane for his audition donned a simple retro Jetsons T-shirt, checked shirt and jeans, and ruffled up his hair. Zane has since said that his costume drew positive and nostalgic comments from the older casting directors. “Know that they’re looking at everything, and everything communicates, somehow,” he has noted. “It was an early lesson, a welcome one, for when I applied for the rest of my career – which was to really realise the strange impact of small things.”

Zane lost out on the villainous role to Thomas F Wilson (for whom Back to the Future would also be his first movie). However, Zane won the role of ‘Match’ O’Malley, one of Biff’s teenage cronies. Joey ‘Skinhead’ Unger (Jeffrey Jay Cohen) and ‘3-D’ Noguera (Casey Siemaszko) completed Biff’s gang. Zane has said he is glad that Wilson beat him to the part of Biff, in 2021 describing Wilson as “one of the funniest, most charming people…” 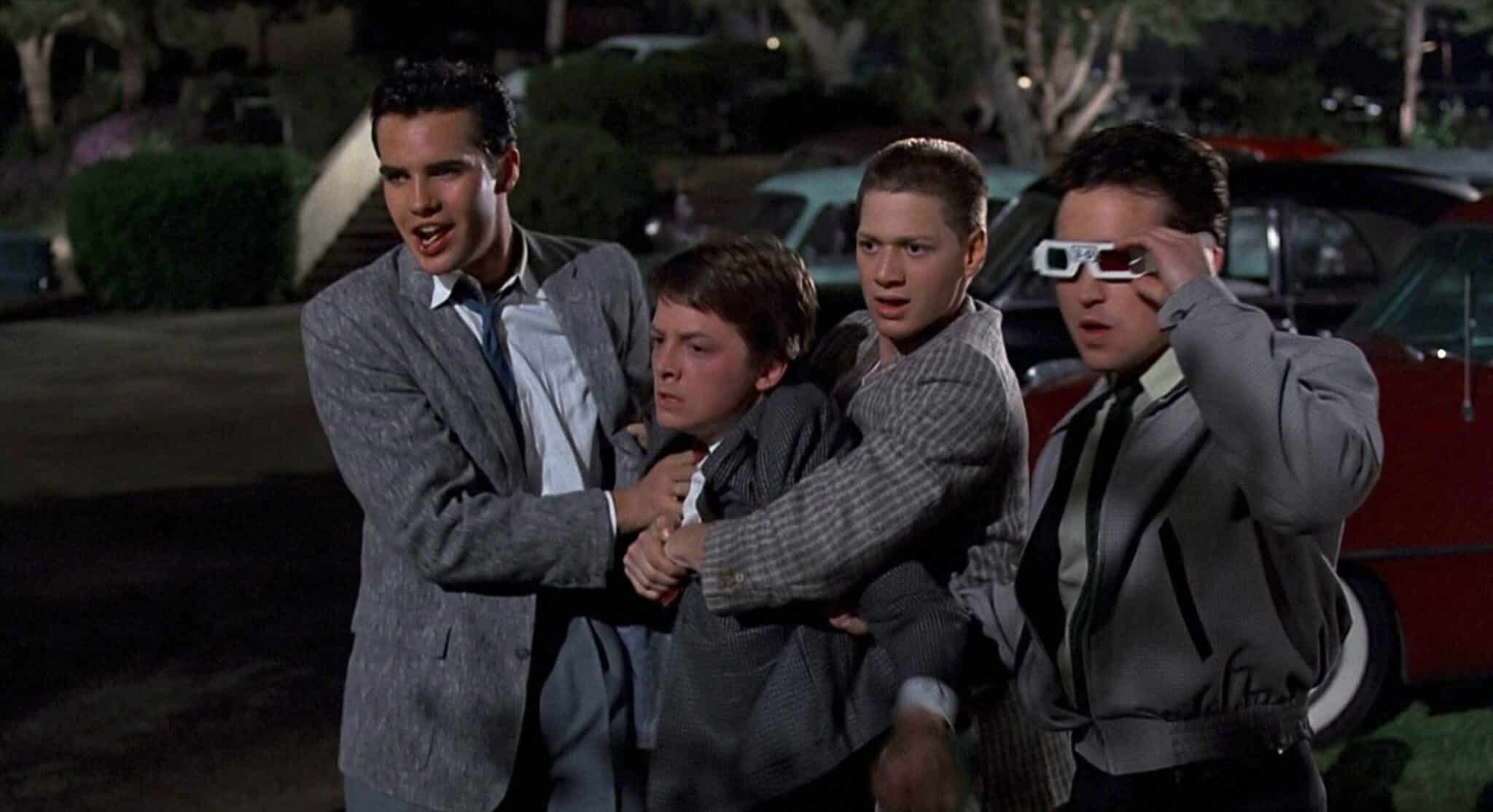 For all that Biff’s cronies are largely confined to the background, they’re instrumental in raising the stakes. They chase after the skateboarding Marty in Biff’s convertible, lock Marty into a car trunk and generally provide the muscle to back up Biff’s threats. Zane shot for six months, including scenes with Eric Stoltz, who’d later be unceremoniously recast, with Michael J Fox taking his place.

“My one line, I think, was ‘S***!'” Zane laughs. “I think I scream when we get dunked in manure.” But he also speaks warmly of his first time on-set: “We used to say it was a baptism of fire, we had to jump into the deep end… What a great pleasure that was.” 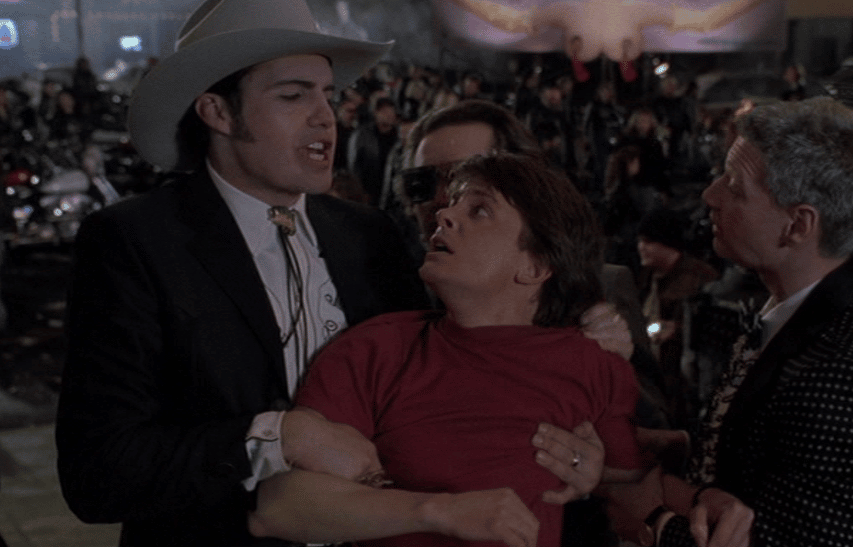 Zane, Cohen and Siemaszko would reprise their roles in 1989’s Back to the Future Part II, cameoing as Biff’s casino henchmen in the alternate version of 1985. The trio would however be replaced in Back to the Future 3, with Biff’s ancestor Mad Dog having a different set of cronies at his disposal in the Western sequel.

Zane’s small role in Back to the Future would only lead to bigger and better things. It was in 1989 that he first won international fame and critical praise, starring as smouldering villain Hughie Warriner in the thriller Dead Calm, opposite fellow rising stars Nicole Kidman and Sam Neill. 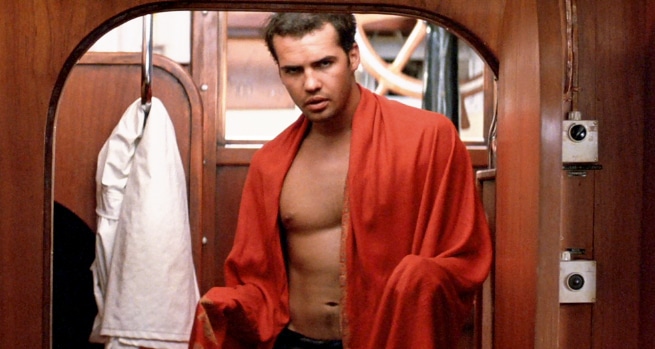 In 1996, Zane took the lead role of crime-fighter Kit Walker in The Phantom. The movie was a commercial failure, but it has since been reappraised in the light of the booming superhero genre. It’s developed quite the cult following. 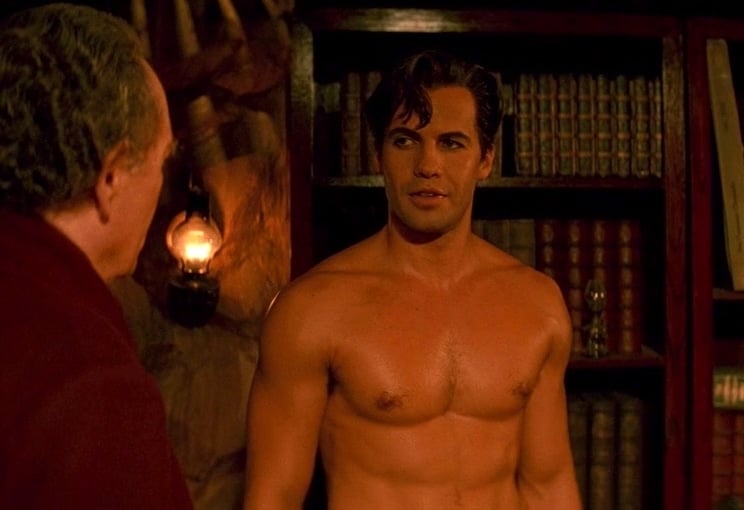 Of course, Zane couldn’t confine his talents to good guys for long: in 1997, he returned to villainy with his best-known part to date: he played Caledon Hockley, the cruel industrialist and fiancé to Kate Winslet’s Rose in Titanic. In a sign of how keen James Cameron was on Zane’s casting, he turned down both Rob Lowe and Matthew McConaughey in favour of Zane.

Titanic became the highest-grossing film of all time and garnered countless awards. Zane himself won a Blockbuster Entertainment Award for the role of Hockley. However, not all critics were impressed with his maniacal stylings. “Zane’s character, in fact, behaves like a villain in a 19th-century melodrama,” wrote critic Geoff Brown in an otherwise glowing review. 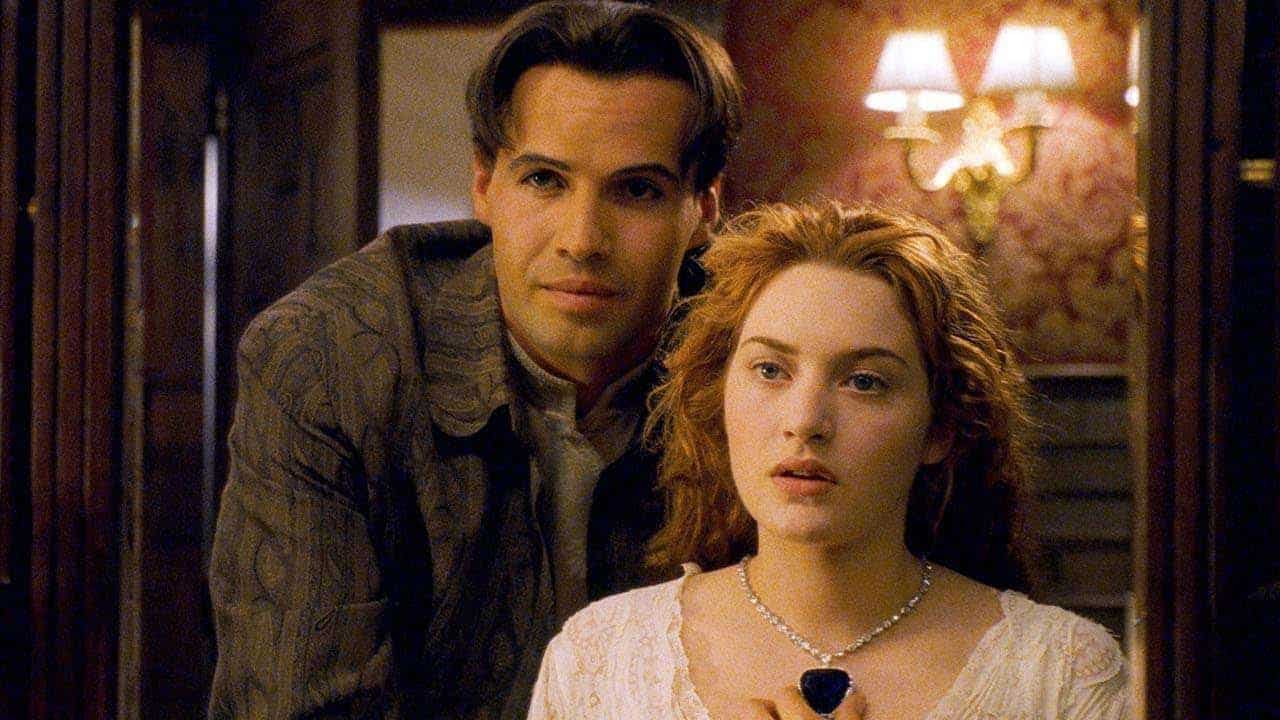 While Leonardo DiCaprio cemented himself as Hollywood’s go-to young heartthrob, and Kate Winslet as a scene-stealing English rose, Zane found himself with fewer and fewer offers from the big studios following Titanic.

Instead, he would appear increasingly in TV movies, and direct-to-video fare including Sniper: Ultimate Kill and The Scorpion King 3: Battle for Redemption. The latter spin-off marks Zane’s only appearance in the Mummy franchise, though his bald look has amusingly led many including James Corden to confuse him with the similarly shaven-headed Arnold Vosloo, who played undead priest Imhotep in The Mummy and The Mummy Returns. 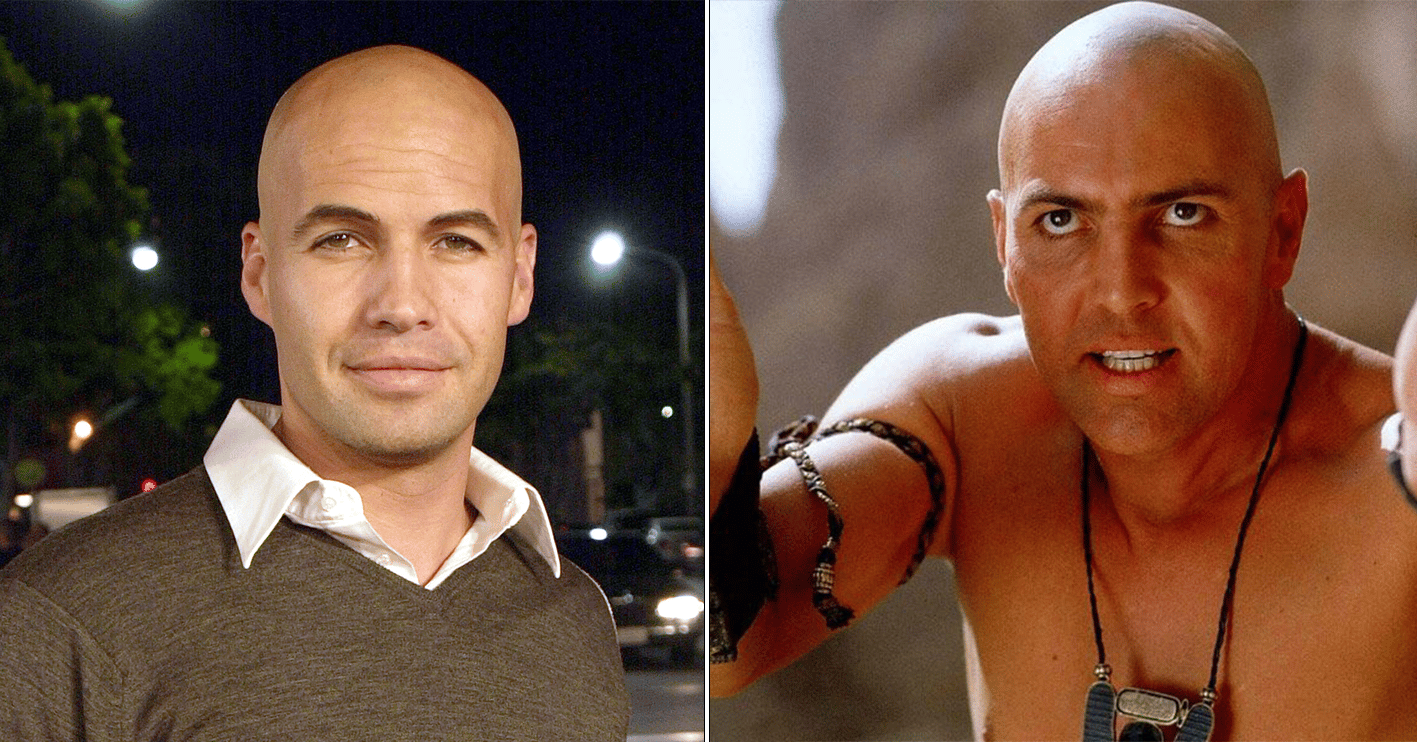 In recent years, Zane has focused on his role as a principal partner in RadioactiveGiant, a production company. In his spare time, he paints abstract expressionist art, which he has displayed at several exhibitions. He’s come a long way since his fresh-faced debut in Back to the Future, but there’s no doubting that Zane has had a huge and underrated impact on popular cinema.